The life-sized LEGO® McLaren Senna is now on display at LEGOLAND Windsor Resort. The car took 30 people, six months to build and it contains almost half a million LEGO bricks, all built around a steel chassis; and featuring real McLaren wheels, seat and other elements. It appeared on the Xbox stage during E3, to promote the new LEGO Speed Champions expansion for Forza Horizon 4. Now you’ll have a chance to check it out up close as the life-sized LEGO MacLaren will be parking up at LEGOLAND Windsor Resort this Summer, for the new couple of weeks. It will then appear at various UK shopping centres including Bluewater and Westfield Stratford. 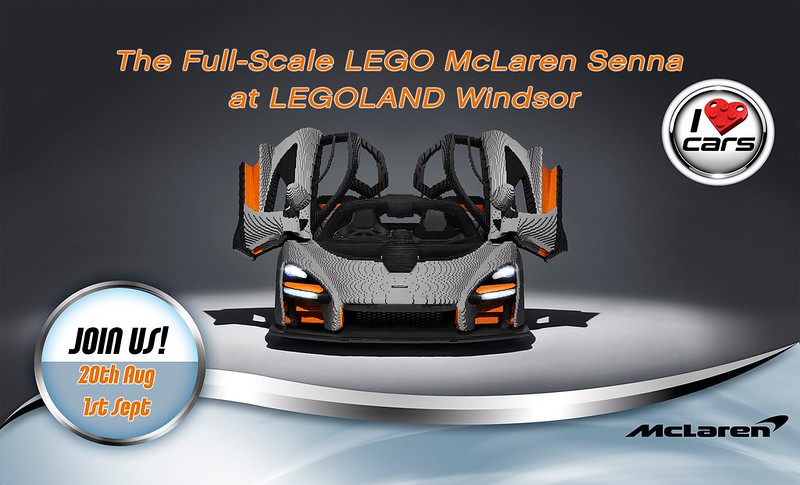 Cars and countless bricks, what’s not to love  It took almost 5,000 hours and half a million LEGO bricks to build the McLaren full-scale model. And you’ll get to see it this month

Join us from August 20th to September 1st.
On 25th and 26th August our team of LEGO experts will show you all the amazing features of the car!

All car lovers are welcome, no matter what age and driving experience. Get the ultimate photo with the McLaren Senna Full-Scale LEGO® and learn more about the LEGO cars range.

Be amazed by the incredible realistic features of this build, which for the first time incorporates parts from the real car. An authentic lightweight carbon-fibre driving seat, an original steering wheel, and pedals from the real Senna are some of the amazing features you can see inside this LEGO model.

You’ll also learn about and enter into an extremely exciting LEGO “I Love Cars” national competition launching from 20th of August – more to be revealed soon!

Start your engine and join the LEGO car fans!