During the Microsoft press event at this year’s E3, the surprise announcement of LEGO® themed DLC for Forza Horizon 4 was made. The popular Xbox race franchise has added a brand new expansions pack, filled with LEGO and Speed Champions cars. As an avid gamer and fan of the LEGO titles from TT Games, I was intrigued to see another developer tackle the world of LEGO through games. But as a PlayStation player, it meant purchasing an Xbox One. Which I did and I’ve been racing around Forza Horizon 4 and the Speed Champions content for a couple of weeks now. 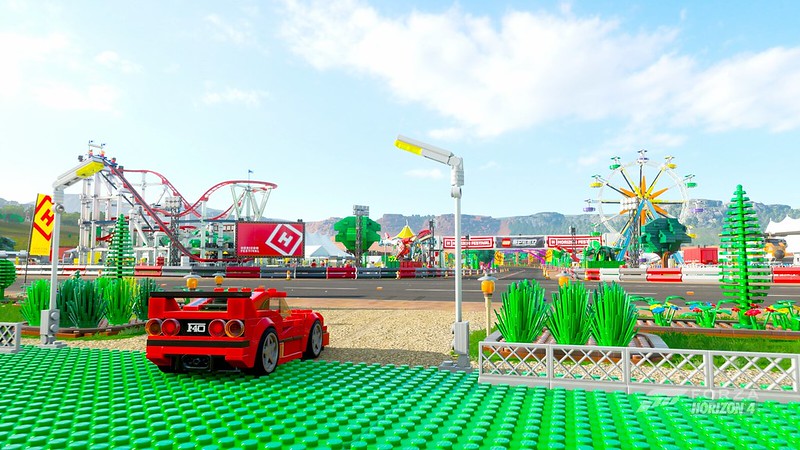 Forza Horizon 4 is themed around a racing festival based in the UK. As an novice driver, you race around the country roads of a quaint English village. As well as racing, you can help a local film crew by pulling off various stunts, take on time trials and everything else you’d expect from a racing game. Following the success of the Hot Wheels expansion for Forza 3, Playground Games teamed up with the LEGO Group to bring the world of LEGO Speed Champions to life. The LEGO Speed Champions expansion pack takes place in a fictional area called LEGO Valley. This mixes the real world environments from the main game with plenty of LEGO bricks and builds. This isn’t a simple reskin of the main game, the developers have gone to great lengths to capture the magic of LEGO as well as a level of detail, with holds up to the motto that ‘only the best is good enough’

LEGO Valley is playing host to the Horizon Festival, which has seen the best of the racing community descend to show off the racing skills. There is a basic story thread running through the game in which you and your fellow racers have been invited to race around the brick-filled world. Then show that the LEGO Speed Champion cars can hold their own the real world cars which have inspired them. 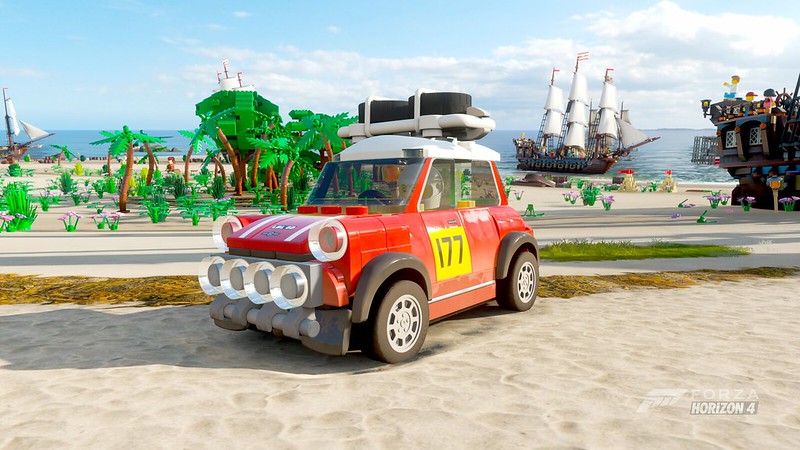 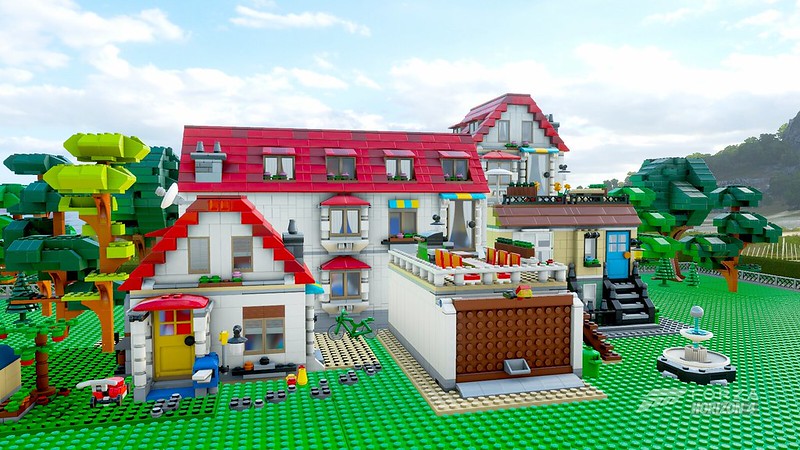 There are a number of Brick Challenges to complete, which earn you bricks. These can be used to unlock new cars and help you expand your Master Builders House. Challenges are nice and varied, from smashing a certain number of objects, winning races, blasting through speed traps and other such things. Some of the most fun of these are based around a UFO, which crashes during the opening race. As you progress through the game, you’ll learn that there are some shady things going down in LEGO Valley. These including glowing Alien fuel cells, which only appear at night and Alien trees, which are only visible when it rains. These are very in-keeping with the LEGO humour. 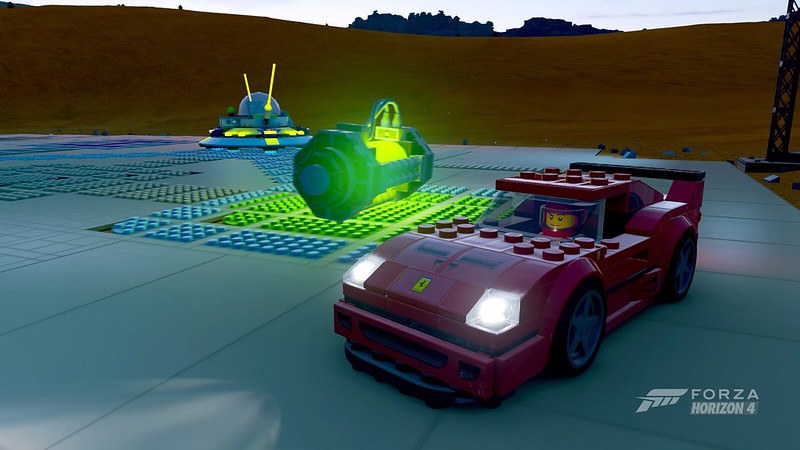 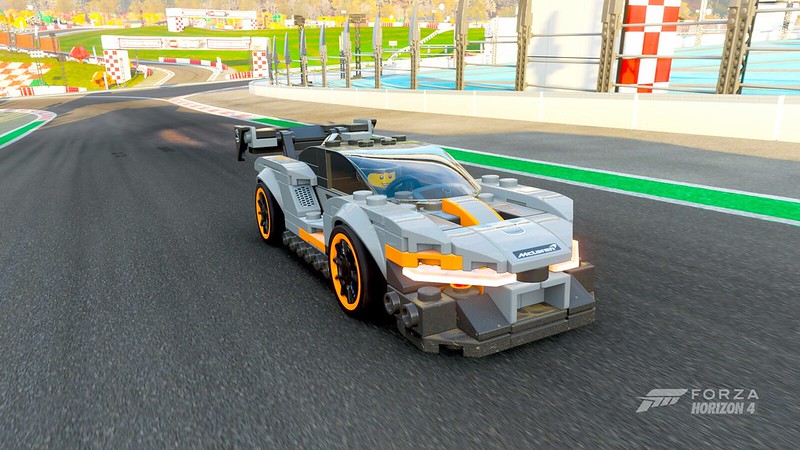 You open the expansion pack by driving each of the three LEGO Speed Champions sets, before you get begin the wheel of the Mini Cooper S Rally. This is a nice all-rounder, although lacks a little on the speed front. The F40 can pick up some speed, but is as twitchy as an AFOL near a discounted LEGO set, one wrong move and you’ll be spinning out. The McLaren is a nice balance between the two, great speed and will a little more control, compared to the F40. I found myself going back to the Mini for many of the challenges. 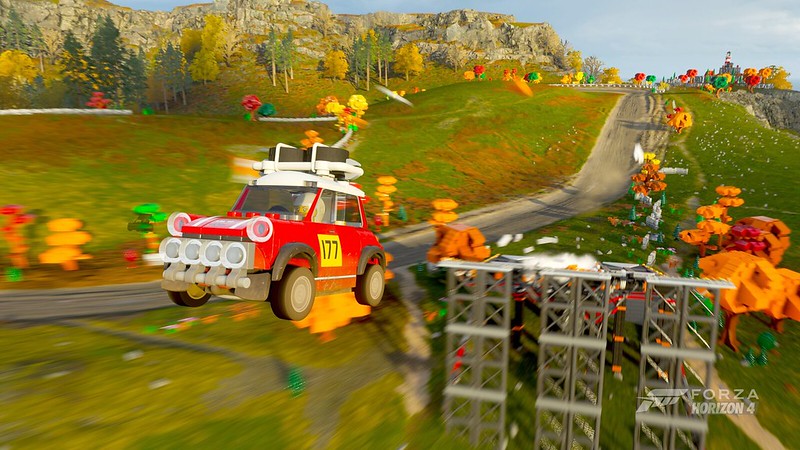 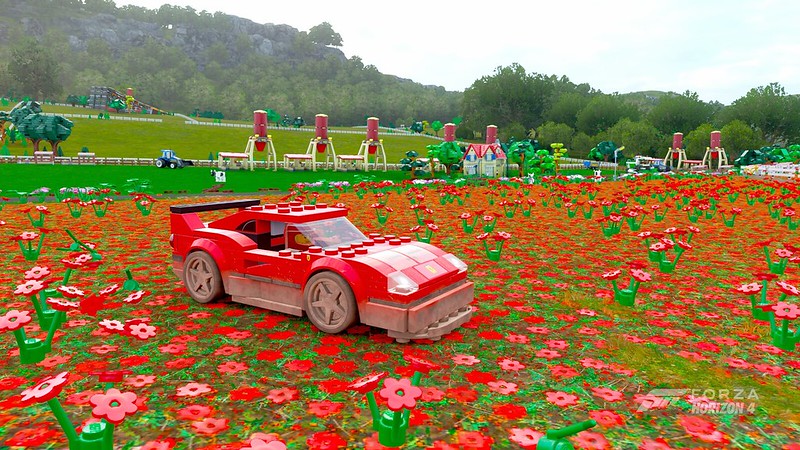 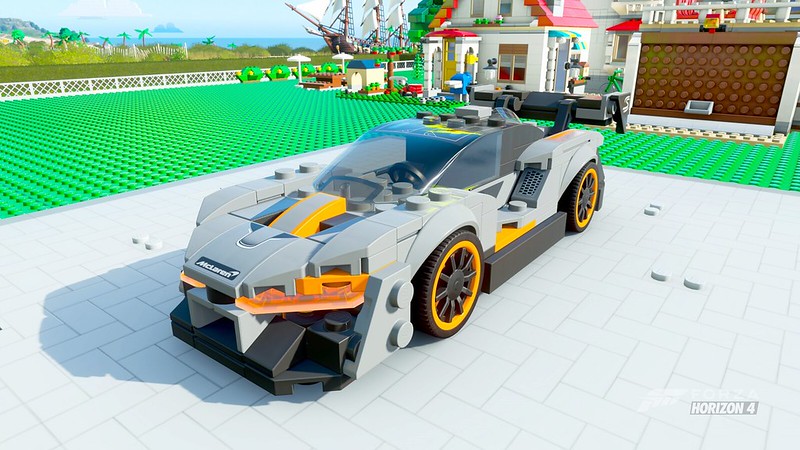 What’s most impressive about the expansion pack is level of detail the LEGO aspects of the game has. Each Speed Champions set is perfectly recreated, right down to each element featuring the LEGO branding on each stud, along with various other production marks. Event the stickers are applied to the digital cars. Every piece of LEGO featured in the game is perfectly scaled to each other. The developers used the same system used by Animal Logic to create The LEGO Movie. They even had to create a special new digital element to allow the cars to steer in-game. Check out the various dev diaries below to see how Playground Games created the LEGO Speed Champions content. 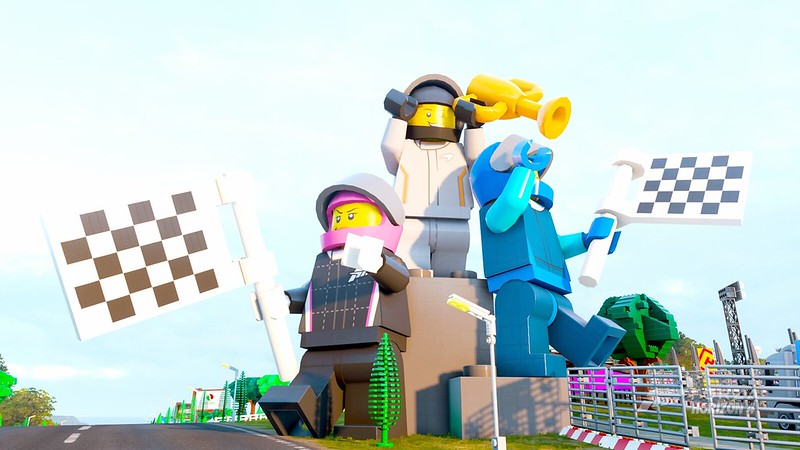 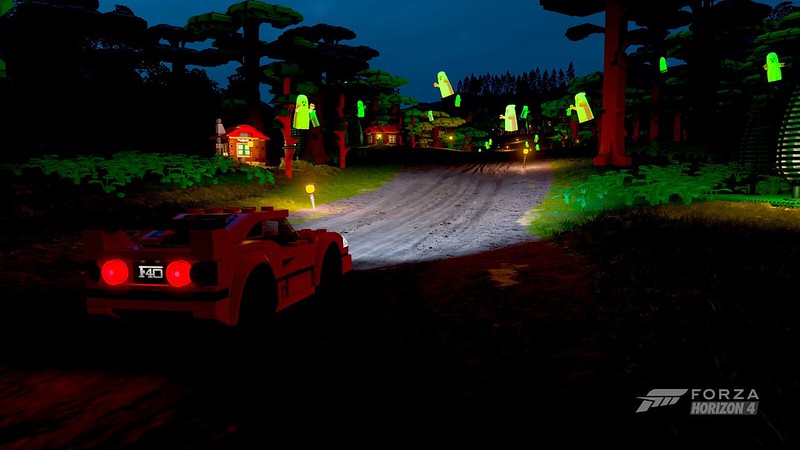 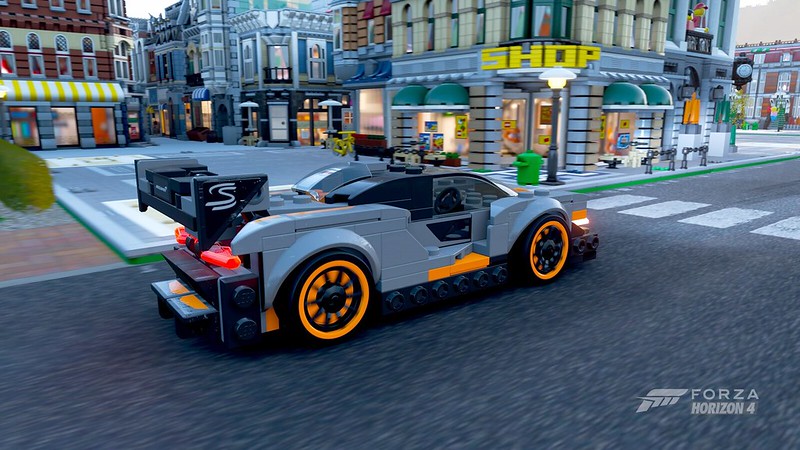 Beyond the Speed Champions cars, the world is filled with other real life LEGO sets. The Horizon Festival features the Ferris Wheel and Carousel, along with some Creator 3-in-1 dinosaurs. Take a trip to the beach to check out some of the LEGO Pirates ships. Speed through the haunted woods, whilst dodging LEGO ghosts. You can even blast Everything is Awesome, by tuning your in-car radio, to Radio Awesome, which plays the song on a loop. There are plenty of fun little LEGO nods, which makes the expansion pack all the more fun. The precision racing of Forza is perfectly matched to the fun of LEGO. 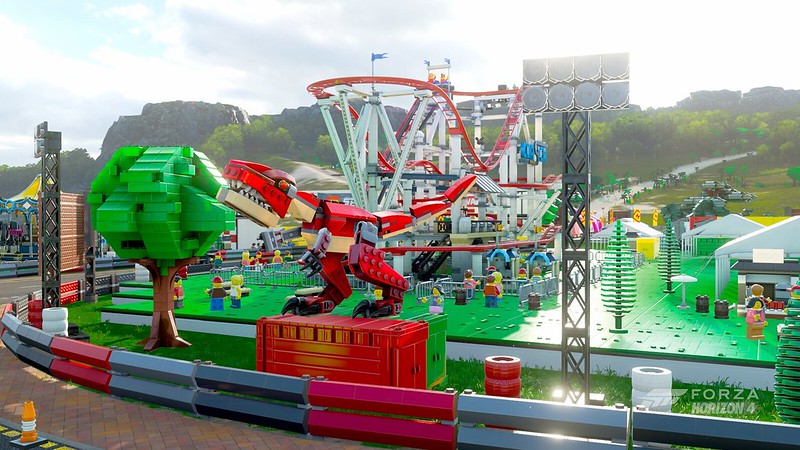 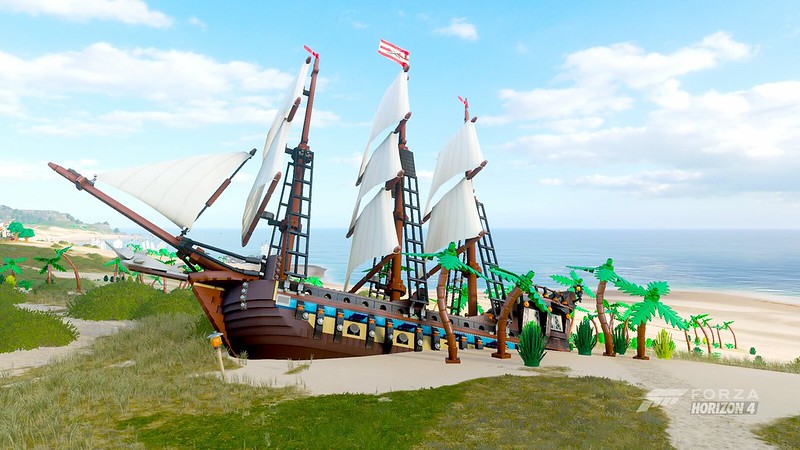 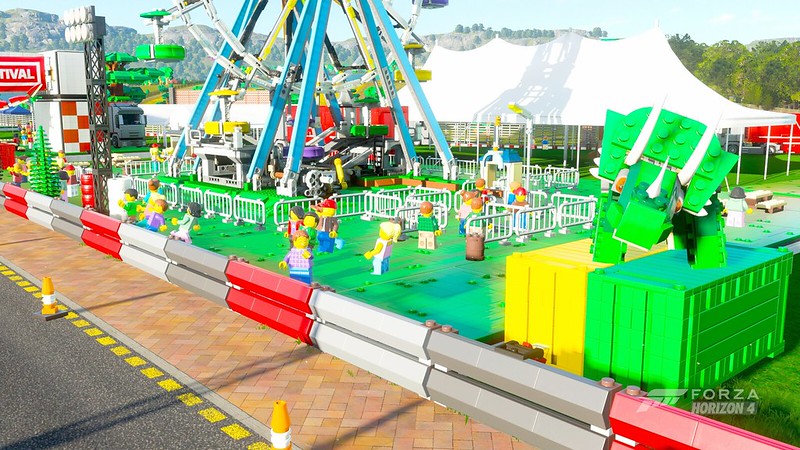 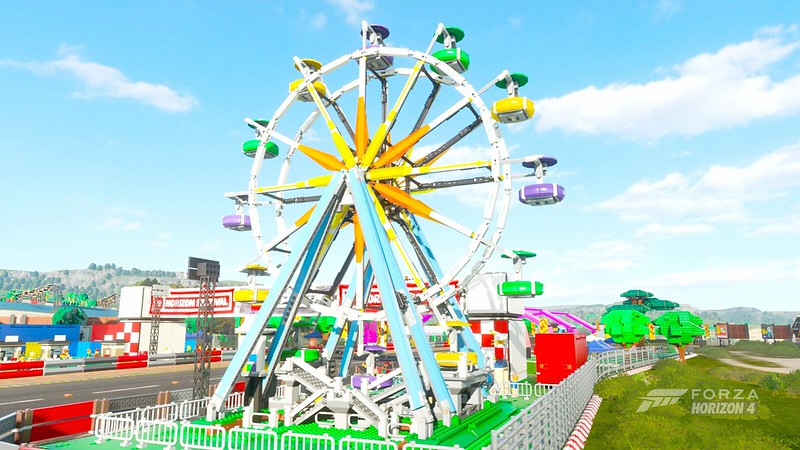 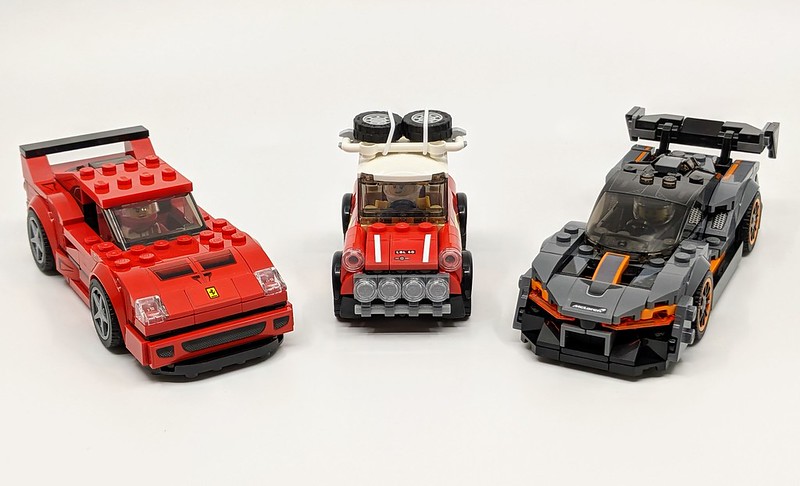 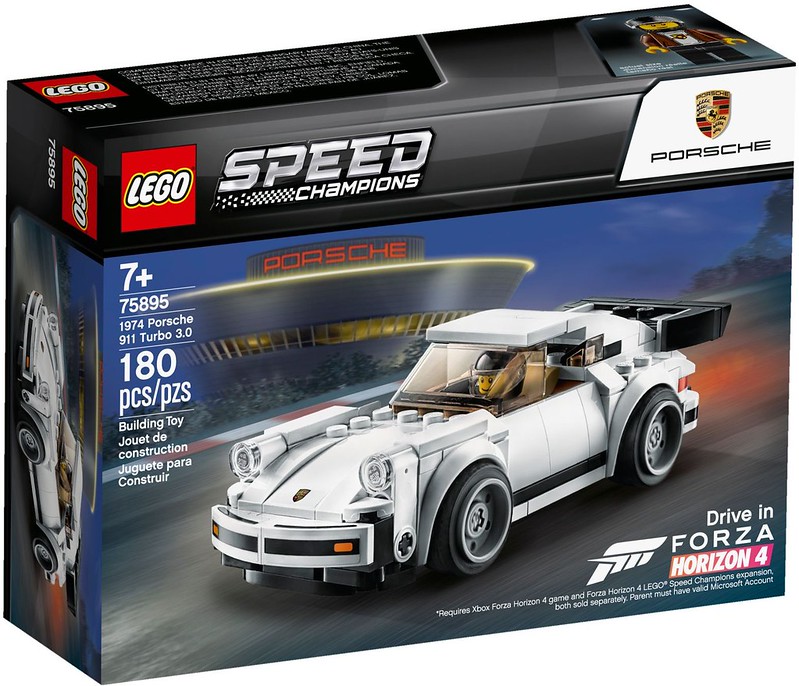 I wouldn’t expect anyone else to go out and buy an Xbox One just to play this game, like I did. But if you own an Xbox and have Forza Horizon 4, then I definitely recommend purchasing the LEGO Speed Champions Expansion. It’s worth the additional price and better still if you have the Xbox Game Pass, the base game is available for free and the DLC is discounted. I’m surprised it taken this long to have a LEGO racing game, since LEGO Racers. It would’ve been nice to have a few more LEGO Speed Champions cars available, especially as many of these vehicles already appear in the real world form. But there is still plenty of content to keep you entertained for many hours. Plus you can take the LEGO cars into Forza Horizon 4 main game. Feel free to add me on Xbox Live, my gamertag is Adwil24.

Access to Forza Horizon 4 and the LEGO Speed Champions content was provided by Microsoft Corporation and LEGO Games.