How LEGO Ideas Made A Mouse Shine

Home » Ambassador » How LEGO Ideas Made A Mouse Shine

When the latest LEGO® Ideas set was revealed last month, people were excited to see two new versions of Mickey and Minnie arrive in the Steamboat Willie set. The shine was lost a little when the second series of LEGO Disney Minifigures were revealed. But although Vintage Mickey and Minnie appear in both, there’s a difference between them, one that makes them shine. One of the fun things about LEGO is seeing the process behind how sets are created. Those Minifigures and bricks don’t just jump into a box and become a set, development can take months, even years of things to be designed and moulded. LEGO Ideas set don’t often feature new elements, so many were surprised to see two new hats on Mickey and Minnie, well it turns out they were created for the LEGO Disney Minifigures long before the Ideas set was created. Over on the LEGO Ambassador Network blog, a insight into the creation of the LEGO Ideas set has been revealed.

“Normally the Collectable Minifigure line has exclusivity of their Minifigures,” Explained Sanne Dollerup, Project Manager on the LEGO Ideas team.  “They were very reluctant to have us ‘borrow’ those Minifigures, but we convinced them we could do some alterations.” But how do you change the characters from one set to the another when the key element is that they are black and white. “From that, the idea arose – what about adding silver? Doing this very exclusive, unique, retro thing.”

The Vintage Mickey and Minnie Minifigures in the LEGO Ideas Steamboat Willie set both feature exclusive silver print detail, setting them apart from the upcoming versions in the LEGO Disney Minifigure series. But the shininess didn’t stop there, the LEGO Ideas team decided to add a little shine to the sets packaging. But that wouldn’t be as easy has expected. 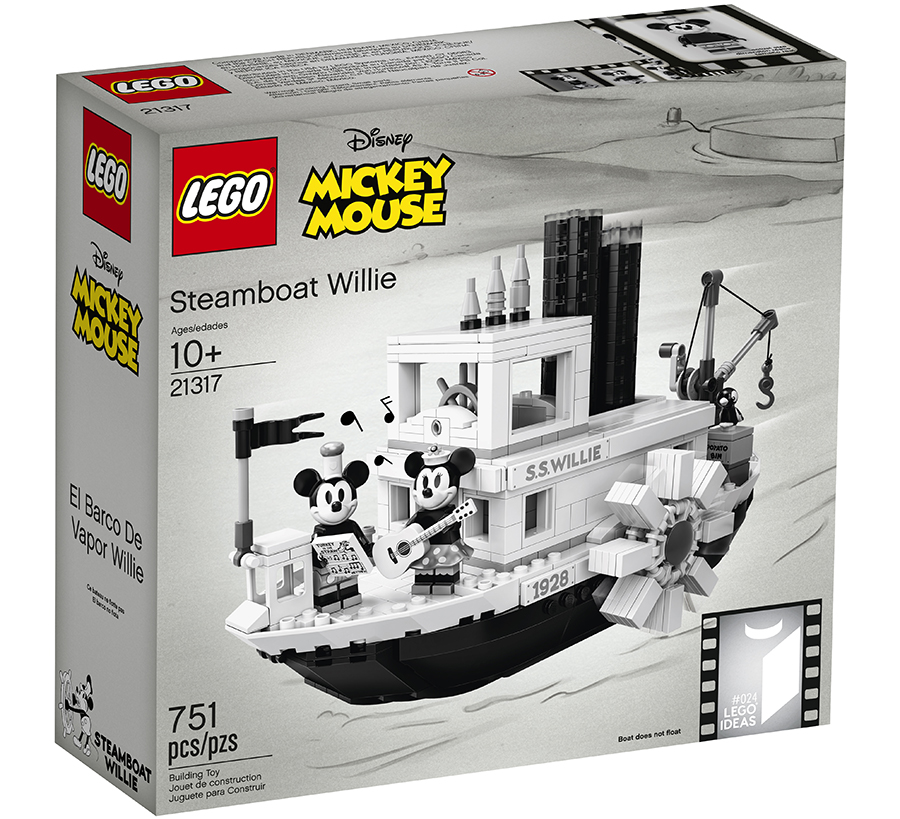 “If we were to print silver on the packaging to reflect the silver decorations of the model (Minifigures) it would require a specific printing method –e.g.  print the silver, then print the dots of the skirt on top of the silver—that not all three vendors could confirm,” Sanne goes on. After that was scaled down, they found printing on a small surface area, such as the piece count in the North American version of the set, in silver foil was impossible. All versions of the packaging of the set – the North American version, the European version, and the Chinese version, had to be aligned on the placement of the silver foil.”

“The company and our vendors were not familiar with silver foil on packaging before, so it was hand carried all the way through and we had to postpone production ready date two times. It was a tough project and quite amazing that we were successful without any impact on planned launch.”

The set is available now from LEGO Brand Stores and online via shop.LEGO.com. There are also two signing events taking place later today in the US and Disney Paris this weekend. More details these can be found here.