The LEGO® Super Mario theme burst onto the scene earlier this year and if by the number sets currently out of stock on LEGO.com is anything to go by, it’s been rather popular with LEGO and Nintendo fans alike. As well as the various retail sets, power-up packs and collection figures, a very special set has been made available exclusively to the US market. Toad’s Special Hideaway was originally intended to be a Comic-Con exclusive release. However, due to the global pandemic, the event was cancelled and the items due to be available at the event have been distributed in different ways. Mainly via LEGO.com and other retail partners including Target. As a big Nintendo fan and owner of the rest of the Nintendo sets, I had to add this to my collection. Despite the limited availability for most LEGO fans, I thought it was still worth taking a closer look at the set. So here we go with my review of the Special Limited Edition LEGO Super Mario Toad’s Special Hideaway expansion pack. 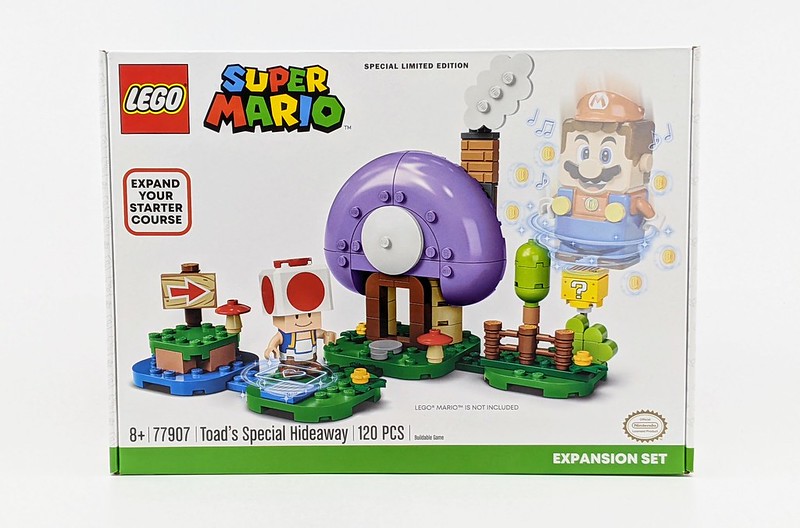 Young builders can add a colorful level to their LEGO® Super Mario™ universe with Toad’s Special Hideaway Expansion Set (77907). A fun gift idea for kids aged 8 and up, it features a buildable house from Toad Village, a Toad figure for LEGO® Mario™ (figure not included) to interact with and a ? Block offering different rewards. There are also lots of decorative builds, including a tree, fence and sign. 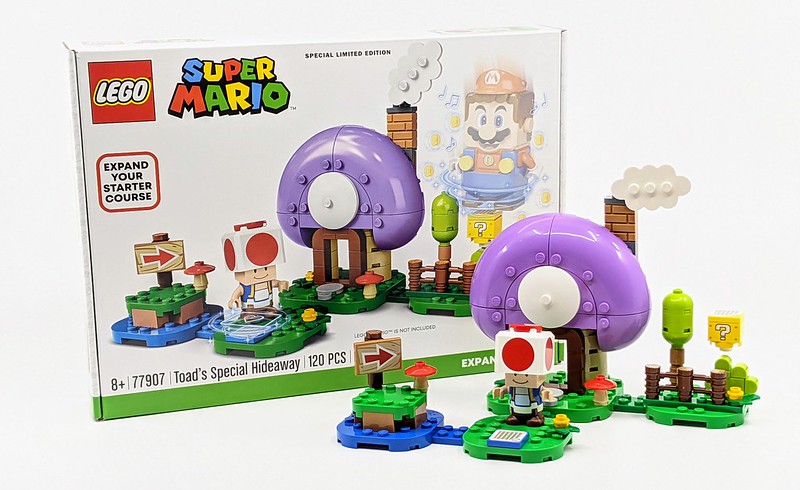 The set is basically part of the larger set featuring Toad, with a few additional elements. So the focus is a small purple roofed mushroom house, this is connected to a trio of smaller island. All of these are built upon the new connector plates, introduced in the LEGO Super Mario sets. The platform in front of the house features a brick-built version of Toad. He’s built with a mixture of uniquely printed parts and new elements. Both the 2×2 round brick used for the body and the 1×2 brick used for their face is all printed. Just like the other mushrooms found in various Mario sets, Toad is topped with a new cap element. This is mounted on an angled hinge plate, so it sits at a jaunty slant, which adds a lot of character this fungus based character. 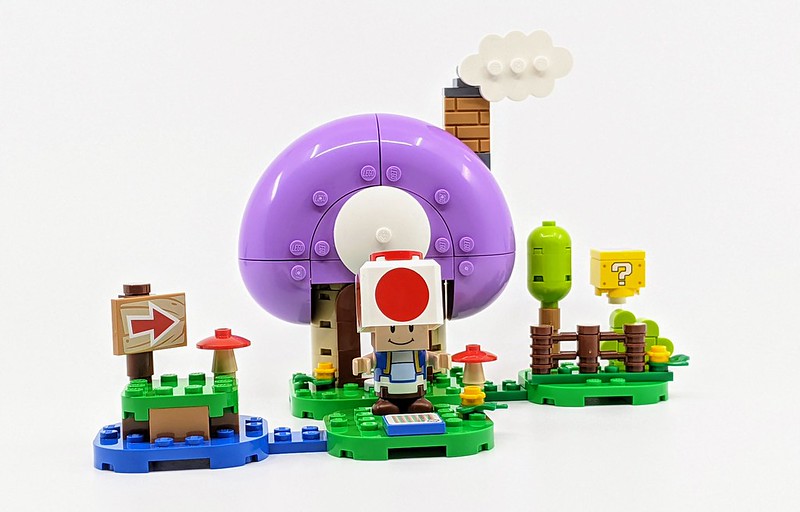 The other plates include an island surrounded by water and the aother is the best part of the entire set as it features a couple of cool pieces and something not found in any of the other LEGO Super Mario sets – a fence! Yes, although much of this set is made up of sections found in other Mario sets, the small fence is unique to this special expansion set. It’s joined by a great little bush, which reminds me of those found in the background of older Mario games. This is used to partly hide a ‘?’ block, which is mounted on a clear rod, so it looks like its floating. All of the various sections are connected by a series of 2×6 plates. As with all LEGO Super Mario expansion sets, they offer much more when combined with other sets from the range, in particular, the LEGO Super Mario Starter Pack. 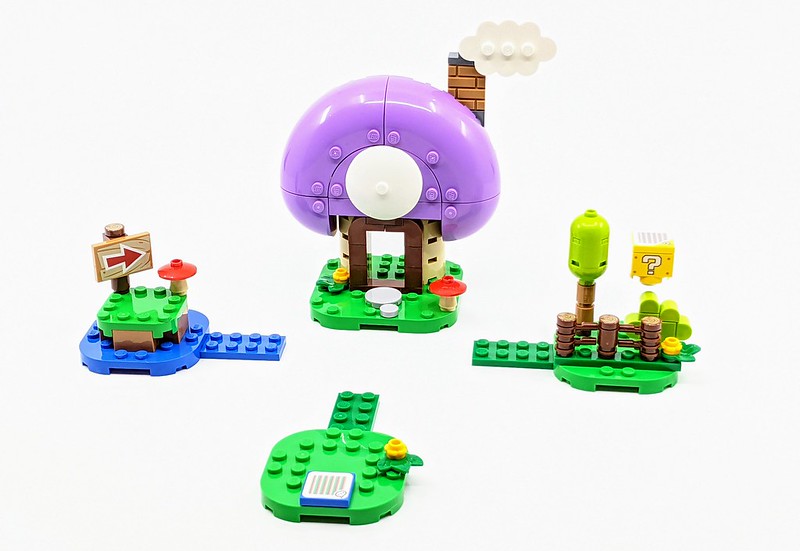 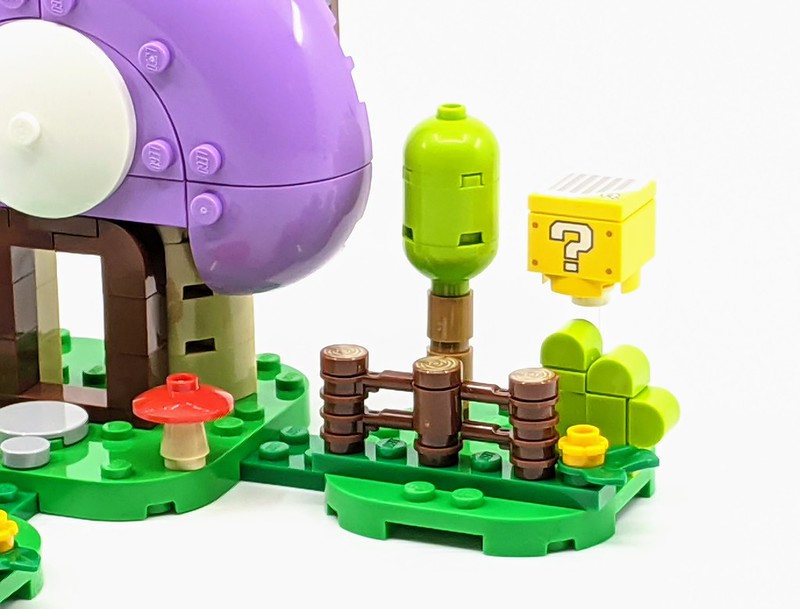 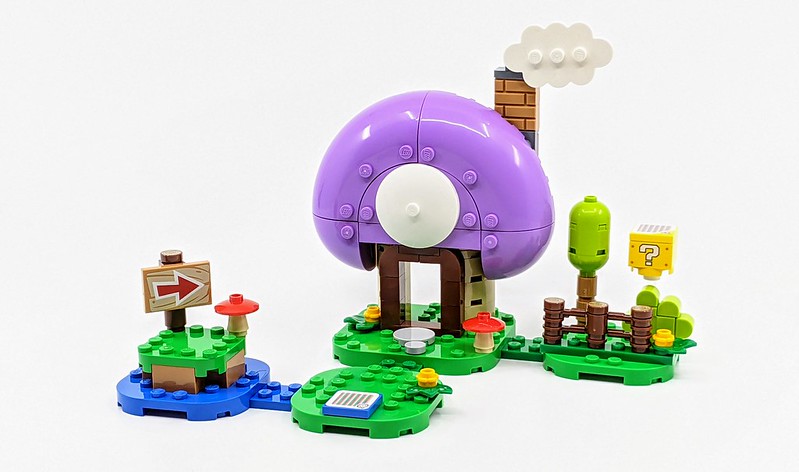 One of the key features of all LEGO Super Mario sets is the Action Brick. These special pre-applied stickered elements, interact with LEGO Mario from the Starter Pack. This particular set includes two Action Bricks, one is found on the iconic ‘?’ block and when scanned gives you extra coins and other special items. The other is found just outside Toad’s colourful house and allows you to greet the ever-faithful toadstool. 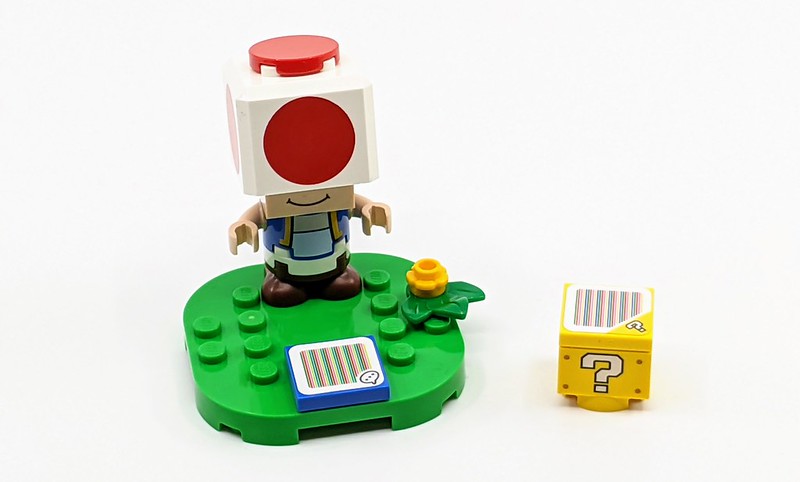 I hate regional exclusives, mainly because the UK never gets them, they are always focused on the US market. I understand how big the Comic-Con and Star Wars Celebration events are, but the existence of sets limited to a single market probably does more harm than good. Even more so now they are being sold directly by LEGO and other major US retailers. Yes I paid a little more than the set is actually worth but it’s the first time purchasing a set not available where I live. Was it worth it? In all honesty, no. The set is very similar to the larger Toad’s Treasure Hunt set and includes the same Toad figure, yet another missed opportunity to bring Captain Toad to the world of LEGO, but as a completist, I’m glad I now own it. You could cobble the exact same build together from the other Toad set and with a few elements from other Super Mario sets, as there is nothing exclusive in terms of elements or Action Bricks. You wouldn’t have the box but the instructions are available from the LEGO Super Mario App. 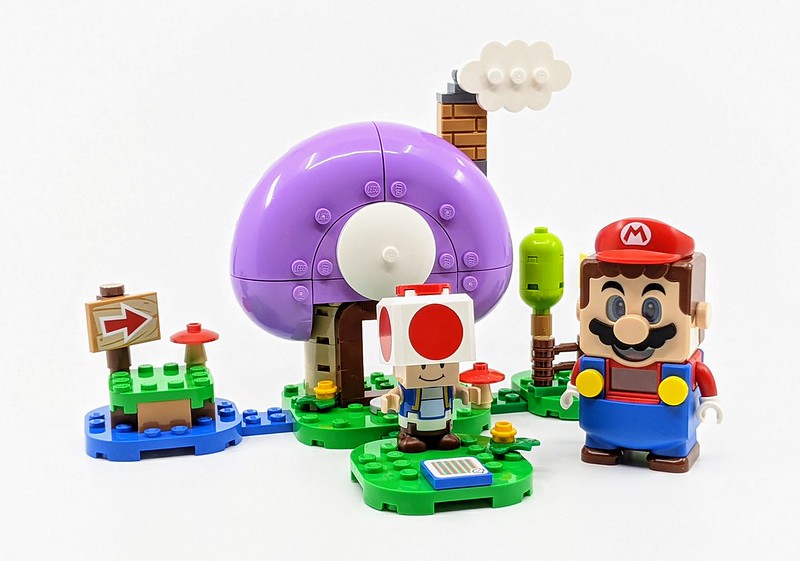