As Mario headed out on his third adventure across the Mushroom Kingdom, he was helped on his way stopping off Toad’s houses. This mushroom-capped little guy has become a Nintendo legend since being introduced in Super Mario Bros. 2. Things get a little confusing as Toad is not only the main character’s name, it’s also the overall now for their species. However, over the years there have been a few notable characters including Toadette, Toadsworth and the legendary explorer Captain Toad. When the name for this set was first revealed, it seemed to suggest this newest Toad could be the star of the show. Although that’s not the case, the set features both Toad and Toadette, along with a small village of Mushroom houses and other obstacles. It’s one of the bigger sets in the new LEGO® Super Mario theme and the focus of my latest review, so here’s a look at the Toad’s Treasure Hunt. 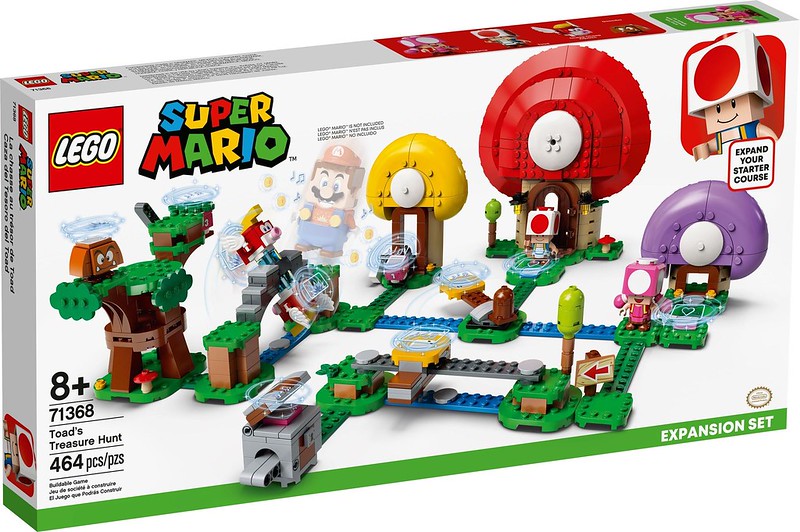 Players must defeat enemies and overcome challenges in Toad Village with this LEGO® Super Mario™ Toad’s Treasure Hunt Expansion Set (71368). A super gift for kids to add to their LEGO Super Mario Starter Course (71360), it features cute Toad and Toadette toy figures, 2 Cheep Cheeps and a Goomba. A bridge and sliding and rotating platforms must be overcome to get to the 1, 2, 3 Blocks in the Toad Houses, the tree and treasure chest. 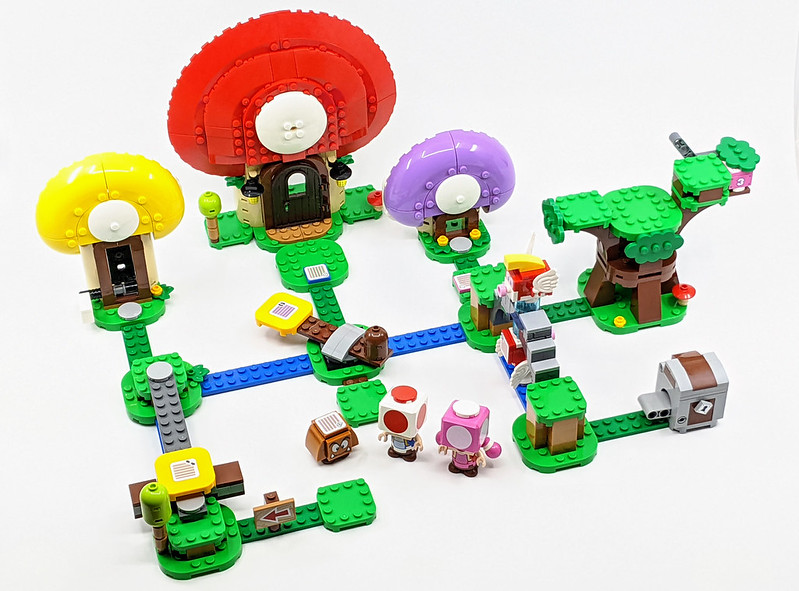 As a larger expansion set, there are plenty of sections to build and lots of things to interact with. The main part of the set is a trio of Toad Houses, there are three of them to build. One larger version, with the red roof, then smaller versions with yellow and purple roofs. The set certainly has a lot of interesting recoloured elements, such as those used for the mushroom cap shaped toppings. Apart from the number block hidden in the yellow house, they merely act a scenery. 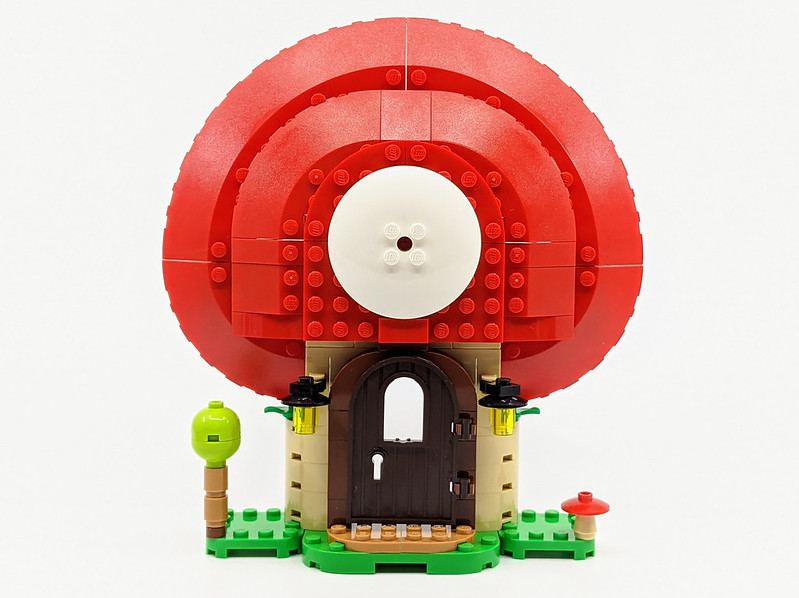 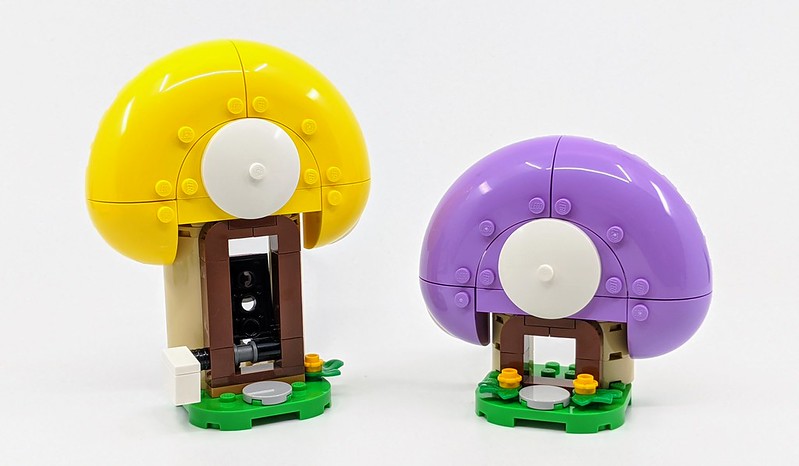 One of my favourite enemy implementations has to be the Cheep Cheep fish. These mohawked creatures have been splashing about in the watery realms of the Mushroom Kingdom since 1985. They are also fond of leaping out of the water, which has inspired their LEGO debut. A pair of them are mounted on a spinning rod, in the centre of a bridge platform. I do like a LEGO tree and there is a small one included, which is home to a Goomba and one of the pink number blocks. Plus the Unikitty cloud plates are recoloured in green to create a nice bushy feature. 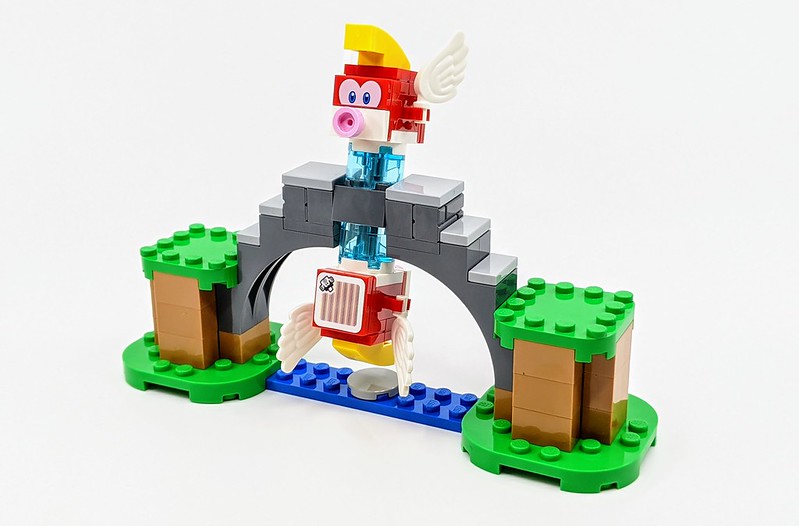 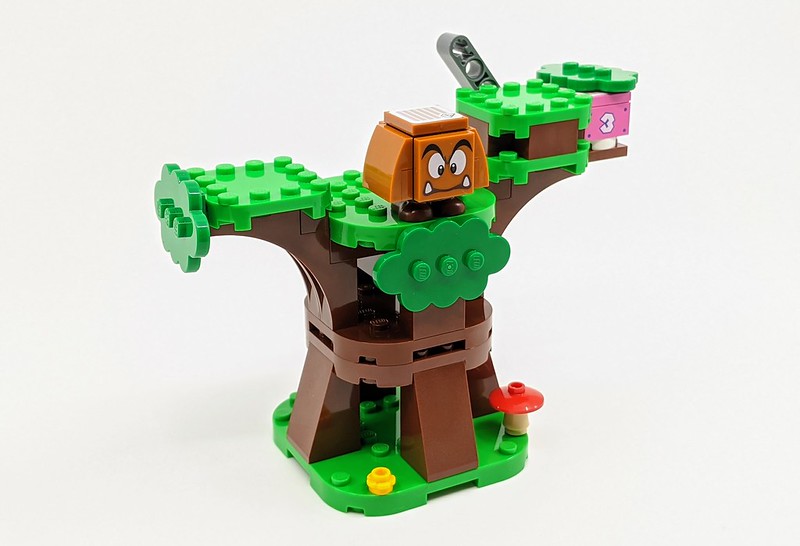 There are a number of interactive elements to the set, including two moving platforms. Placing LEGO Mario on them and moving him along either a bridge or round a turntable, will let you collect more coins, just don’t fall off. You’ll notice various levers dotting about the set. These each uncover a pink, numbered box. One is hidden in the yellow house, hitting the white brick topples the door. Head over to a mysterious chest and flip it open to reveal another and then climb the tree, search through the leafy greenery and find the final one. Each of the sections you build are connected together by various plates and you have plenty of options of how you configure them together. 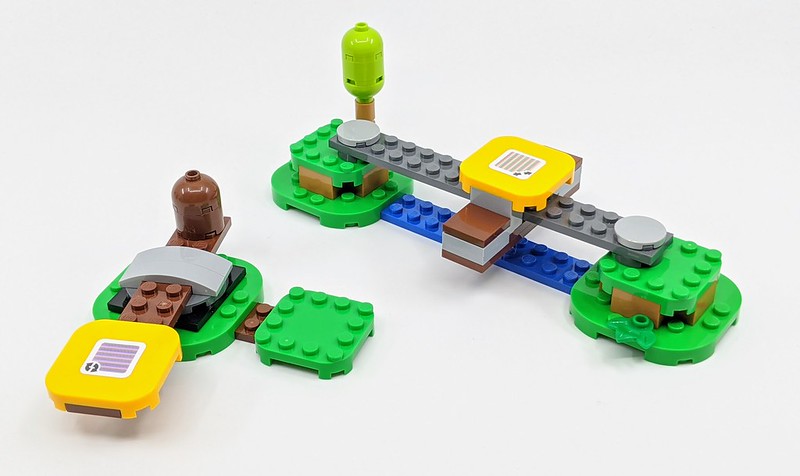 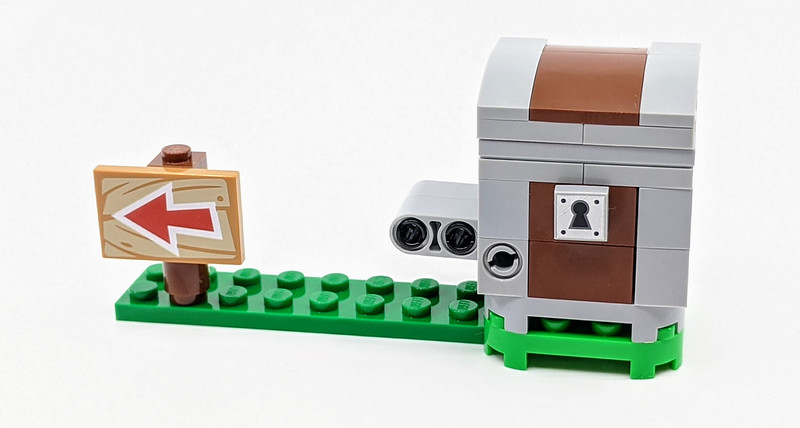 Along with the brick-built Goomba, there are a pair of Cheep Cheep fish. It’s amazing how well current LEGO elements have been used to create these characters, although they do have new wing elements. They are little more blocky than the ones featured in the later games, but I really like how well they have been done and integrated into the set. 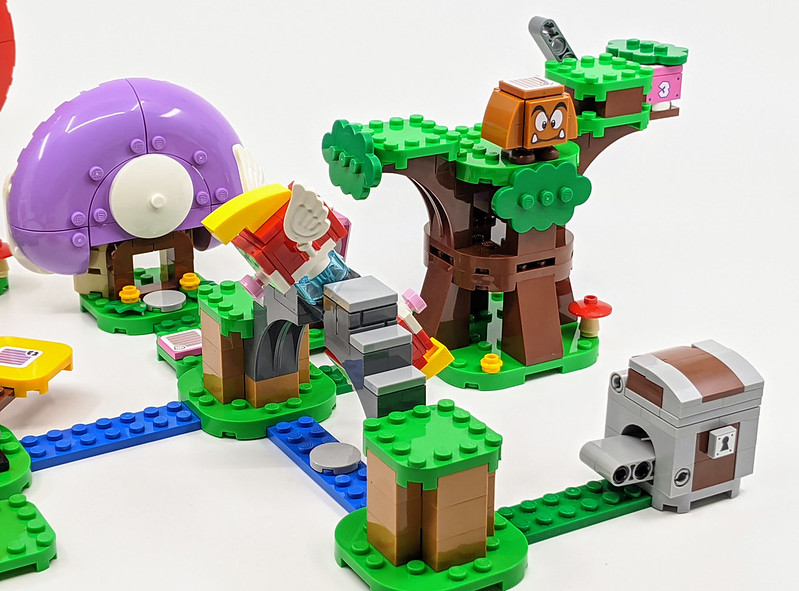 It wouldn’t be Toad’s Treasure Hunt without a Toad, and the set includes two. The original Toad and his female chum Toadette. Both are built in a similar fashion and use a mixture of uniquely printed parts and new elements. Both the 2×2 round bricks used for the bodies and the 1×2 brick used for their faces are all printed, as are all the detailed elements in the LEGO Mario sets. Just like the other mushrooms found in various sets, the Toad’s are topped with a new cap element. These are mounted on an angled hinge plate, so they sit at a jaunty slant, which adds a lot of character to both Toad and Toadette. 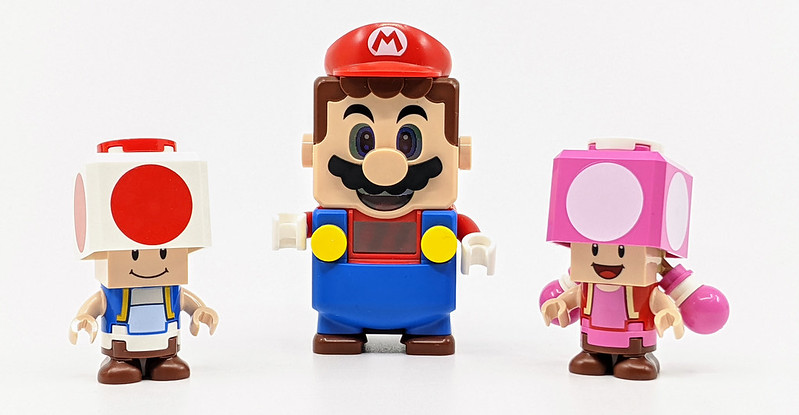 As a fairly large set, there are plenty of Action Bricks to interact with, meaning this expansion is a great way to help boost your coin collection. Both Toad and Toadette have Action Bricks on their respective plates, these cause Mario to cheerily shoot off some well-known phrases. Another two are found on moving platforms, one is on a turning plate and the other is a sliding one. In terms of bad guys, there is a Goomba to stomp on and each of the Cheep Cheep Fish has one. The last three are mounted on a trio of pink boxes, which are hidden across the course. Hitting them in order will give you a tasty coin bonus. 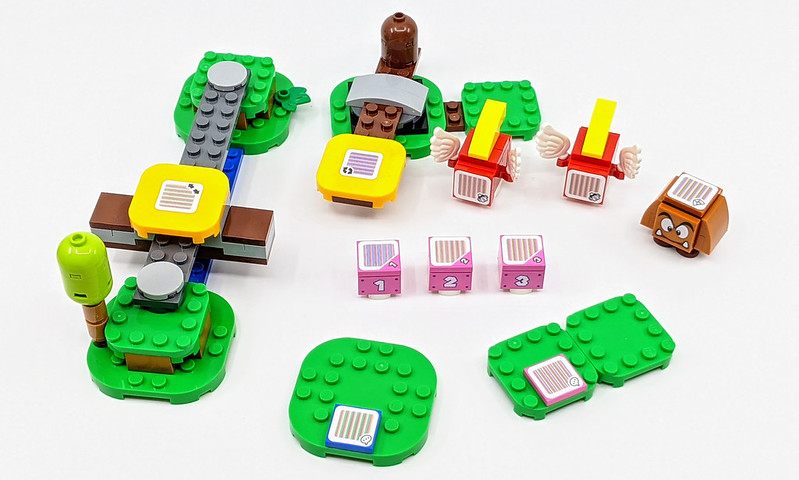 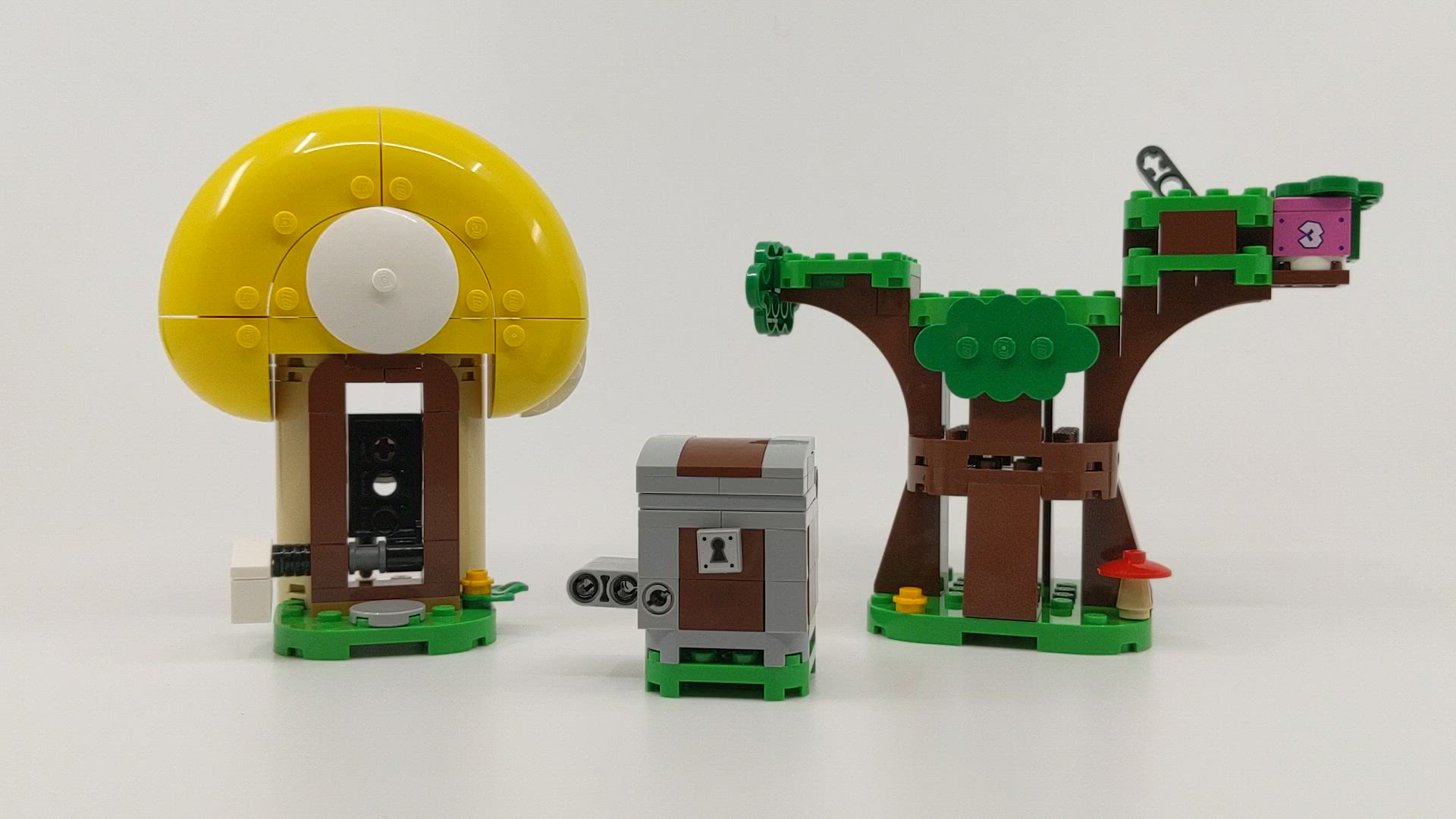 Despite the disappointment of no Captain Toad, I do love the play features dotted about the set. I think the way the Cheep Cheeps have been used is very clever and simply done as well. Definitely the best use of enemies in a LEGO Mario set I’ve built so far. The two Toad characters look great, those new mushroom cap elements are a little cubic but work for the style of the theme. Despite the fairly flat nature of the Mushroom Houses, they add a bit of colour to the often limited palette used for the main sections of most sets. As a gamer since the late 80s, the grid-like maps between levels in the Mario games hold fond memories and of all the LEGO Mario sets, this one reminds me of the world overviews the most. It does seem an expensive set for what you get, but there are plenty of play features, loads of Action Bricks and some great little builds. My only complaint is the lack of Captain Toad, I do love Captain Toad. 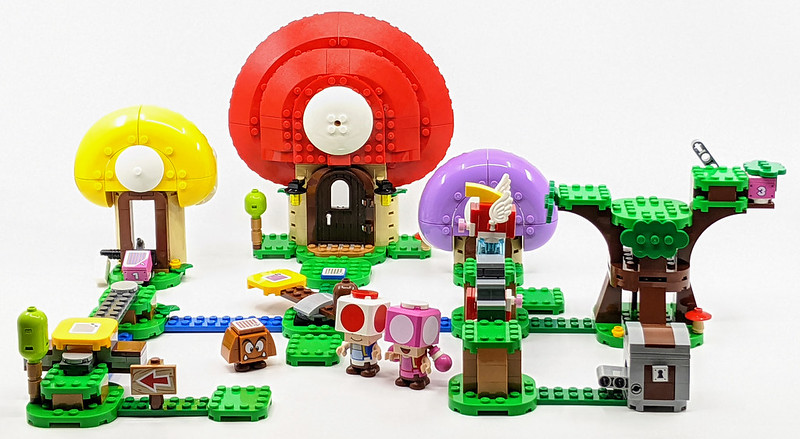