Way back in 1981, a great ape would rampage across a building site and it would take a lonesome carpenter to face off against the raging Kong. This brave dungarees wearing chap would later become known as Mario. Over the last 35 years, this cheerful Italian became a plumber and has appeared in countless classic Nintendo games. With each new Nintendo game system, Mario has reinvented himself and has managed to appeal to multiple generations. Now he takes on his most usual role, as the blocky star of the new LEGO® Super Mario theme. LEGO Mario can be found in the Starter Course set, which is where I’ll be starting my reviews of the entire LEGO Super Mario range. So let’s-a-go….. 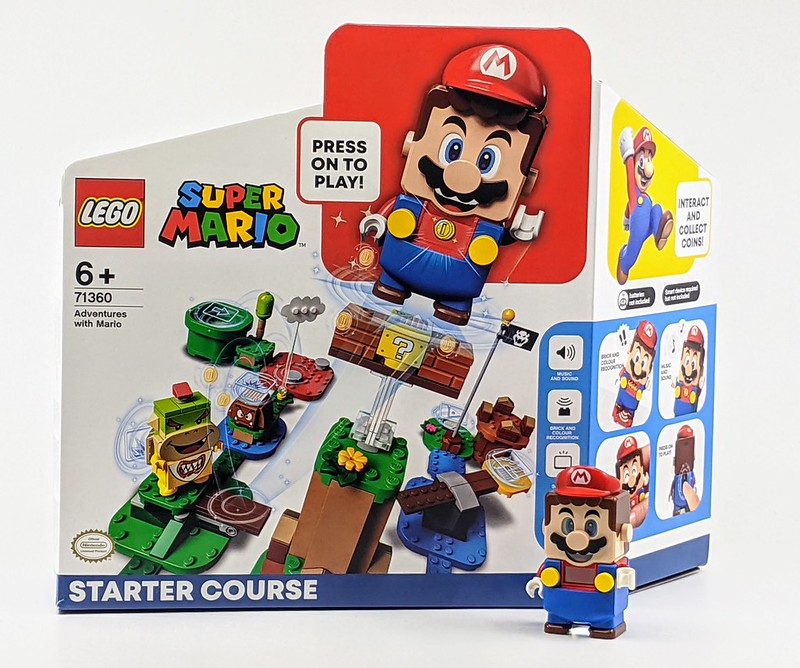 Kids can team up with their favourite character in the real world with this LEGO® Super Mario™ Adventures with Mario Starter Course (71360). The set features a LEGO Mario™ figure that gives instant expressive responses via the LCD screens and speaker. Players earn virtual coins moving LEGO Mario from the Start Pipe to the Goal Pole via spinning and cloud platforms, the ? Block, and super battles with the Goomba and Bowser Jr. toy figures. Rearrange the bricks to create new levels to master. 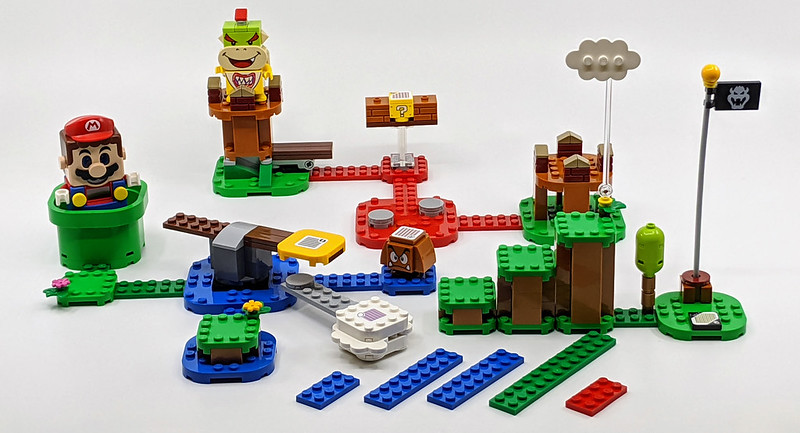 The Starter Course features everything you need to play the LEGO Super Mario game. Well apart from the instructions, these can be found on a companion app, more on that below. You’ll find a selection of bricks, which basically create a number of minibuilds, which can then be combined together to create a course. These include platforms, walkways and a couple of characters. There is no set way to piece these various creations together, well apart from the Start Pipe being at the start and the Goal Pole being at the finish. Many of these minibuilds recreate various familiar Mario icons, such as a green warp pipe, item blocks and castle turrets. 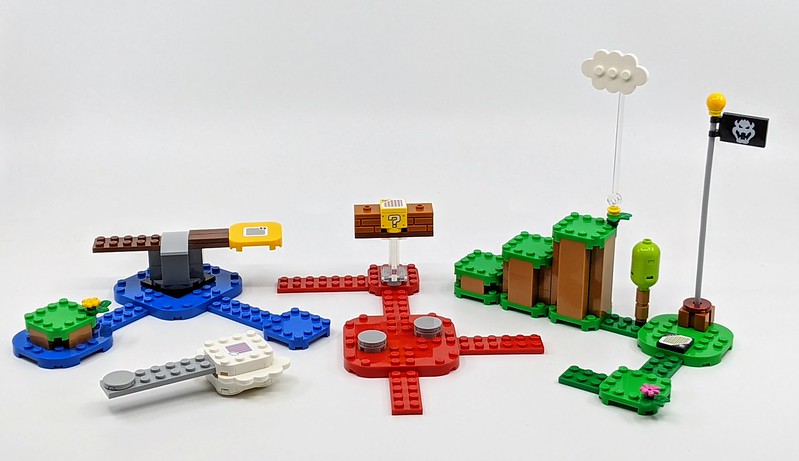 Along with these minibuilds, you’ll also find a few prime colour plates, which can be used to connect the various sections. There are also two unique Action Brick sections. A rotating platform, upon which Mario can be placed and slowly spun around to collect coins. You could fling him around quickly but be prepared for him to fall off as there are no stud connection points, where is part of the peril and apes the action from the video game. There is also a cloud, this do have studs and allows you to swing LEGO Mario around the sky collecting coins as he flows. 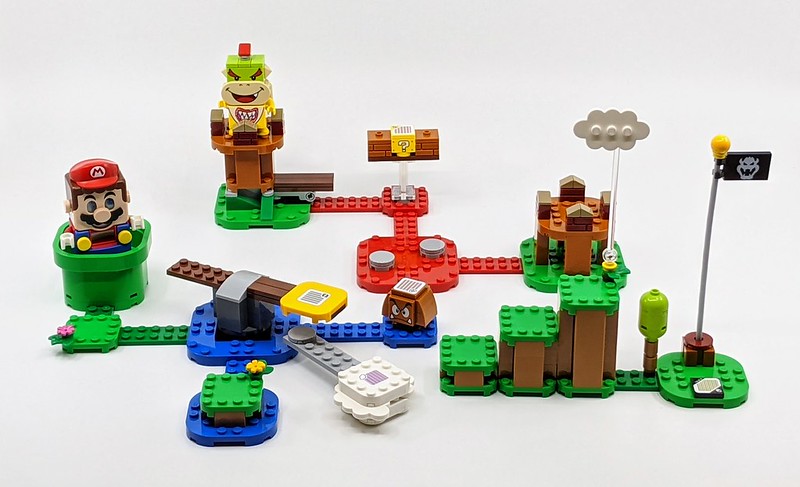 A super plumber doesn’t just need leaky pipes to tackle, the Mushroom Kingdom is filled with various enemies. The Starter Course includes two bad guys, a classic Goobma and Bowser Jr. Both are brick-built and both include Action Brick points. One thing I like about these characters and in fact the entire set is that all pieces with design details are printed, there isn’t a single sticker. Which is needed for a set, which is going to be handled quite a lot. Plus the brick-built character, match the scale of the LEGO Mario. 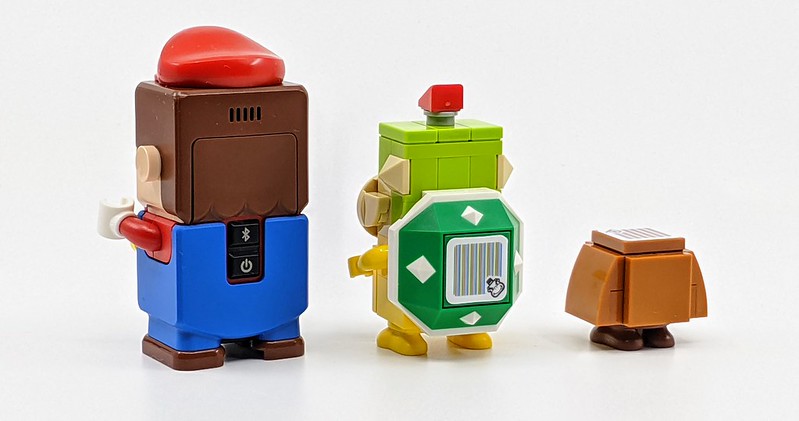 The LEGO Super Mario sets can be built via a companion app, which is available for free on most smart devices. You can also access PDF instructions from LEGO.com (just visit the product page for each set and hit the Building Instructions tab). The instructions part of the app is similar to the previous available Instruction Plus and LEGO Life apps. As digital instructions, you can manipulate them to get a 360º view of the section you’re building as well as being able to zoom in. 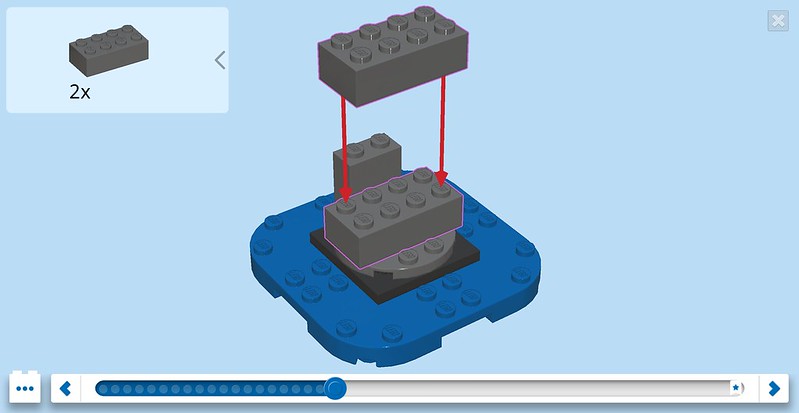 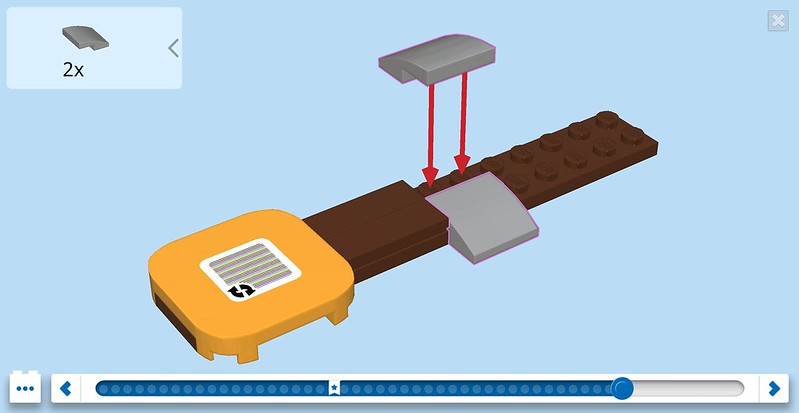 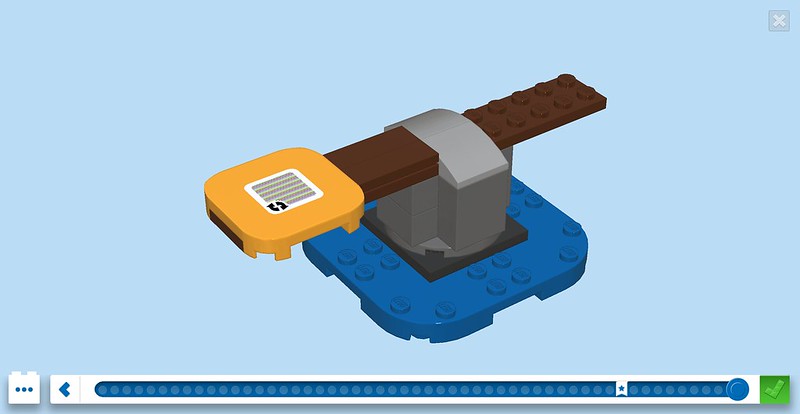 You can also share your creation via the app, on LEGO Life as well as find inspirational course ideas. Plus it appears the app will be offering Weekly Challenges. The app also keeps track of your coin total and acts as an additional element to gameplay, plus you make sure LEGO Mario is fully up-to-date with the latest firmware, this will automatically be applied to LEGO Mario, whenever he’s connected to the app. 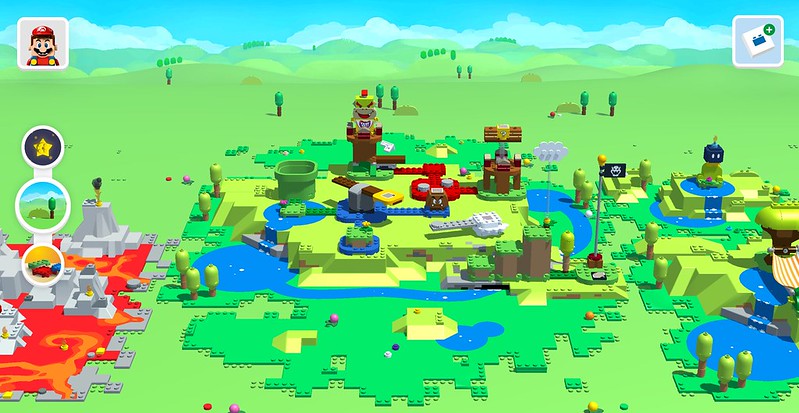 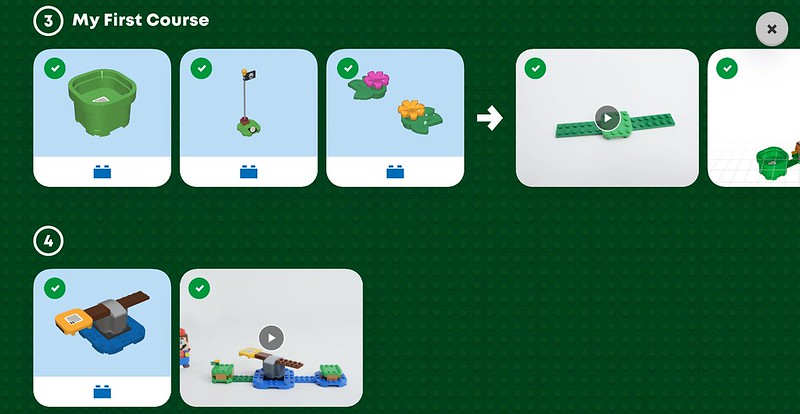 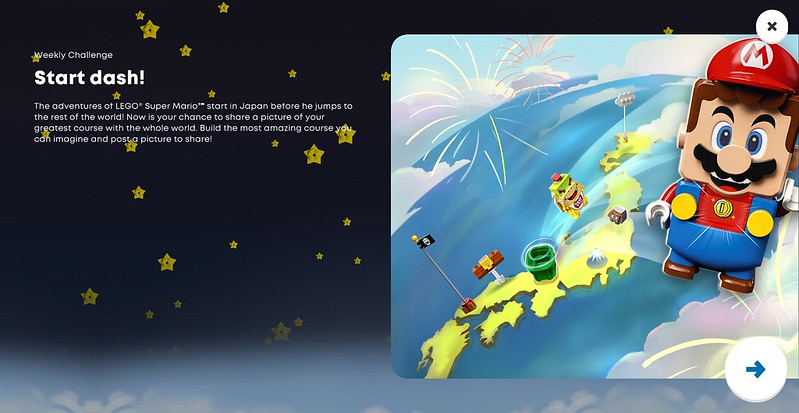 I’ve covered the LEGO Mario figure in more detail here, but the basics are that it’s an interactive character, which is key to the entire LEGO Super Mario theme. Admittedly, his blocky appearance is a little odd-looking, but it does work as part of the overall aesthetics of the theme. As well as being fully compatible with all the additional LEGO Super Mario expansion sets, LEGO Mario can also be kitted out in four additional outfits, to gain new abilities. 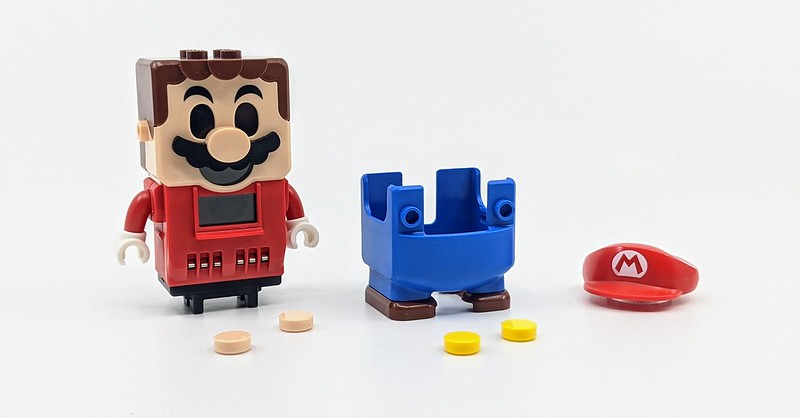 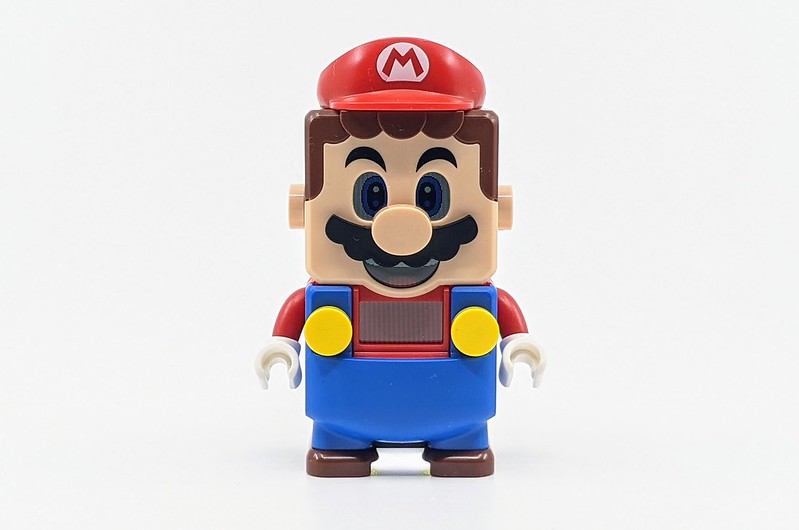 As well as being able to recognise coloured surfaces, LEGO Mario’s magical sensor can also interact with special LEGO elements known as Action Bricks. These are not printed elements, but stickers, which you’ll be pleased to know are pre-applied. These are all found on 2×2 plates and look a little like colourful barcodes, each with a symbol relevant to the character or surface it’s attached to. When LEGO Mario scans these Action Bricks they activate various things. For example, place LEGO Mario in the Start Pipe and this begins a 60-second timer, stomp on a Goomba to take it out and bop the ‘?’ block to gain extra coins or other power-ups. 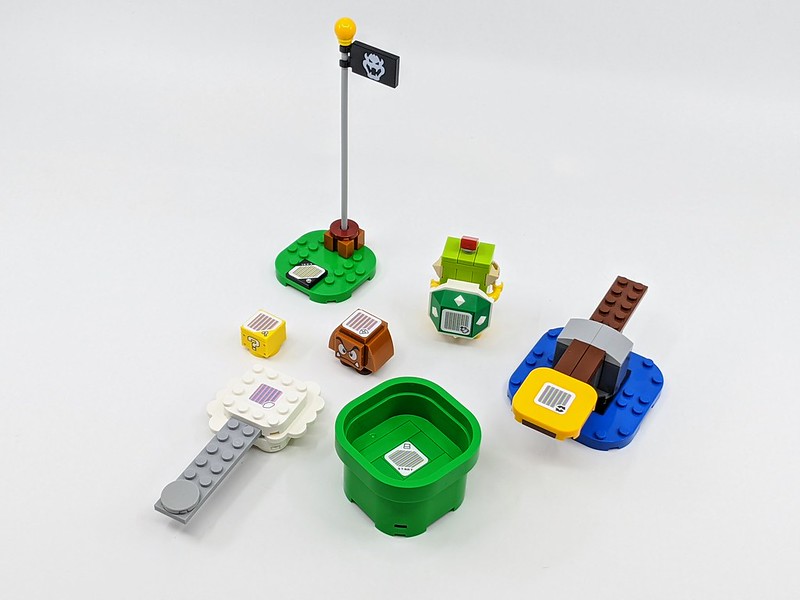 As well as a passion for LEGO, I’m a gamer. I cut my teeth on the Atari 2600, dabbled in the Commadore 64 before I truly began my gaming odyssey with SEGA. Until I happened upon a fungus-filled kingdom. My first proper foray into the world of Nintendo was with GameBoy,  then the N64, I soon picked up a SNES, NES and have been a keen Nintendo fan ever since. So news that my two passions were set to collide intrigued me. When the first sets were revealed I was a little unsure. But I’m always open to new things and having played around with the Starter Course I like the direction both LEGO and Nintendo have chosen. The creative melding of building and gaming is nicely captured. I fully understand why people are not particularly keen on the visual route taken with the LEGO Super Mario line, but this isn’t meant to be something you can whack on a shelf to display. Sure you could elements of the set to create something like that, that’s part of the fun of LEGO bricks. It wasn’t what I was expecting from LEGO and Nintendo working together, but in the same breath, it’s exactly to be expected. When has Nintendo ever gone down the safe route?

As a LEGO set, 231 pieces for the price may not seem that particularly great value. However, most of the money is poured into the interactive Mario figure and the set also contains key elements to get the best out of the entire range. The set is available now in Japan, available to pre-order globally and will be available from August 1st.