To coincide with the launch of the LEGO® Speed Champions expansion for Forza Horizon 4, I reviewed all three of the sets which are featured a driveable cars in the game. But a fourth Speed Champions car has recently been added to the game and it’s also been released as a new set. The 1974 Porsche 911 Turbo 3.0 is the sixth Speed Champions set to be based on the high-end German supercar brand. This is the second LEGO version of the Porsche 911 Turbo, with a lime green version being included in set 75888. Is it a worthy addition to the Speed Champions theme? Let’s take a closer look. 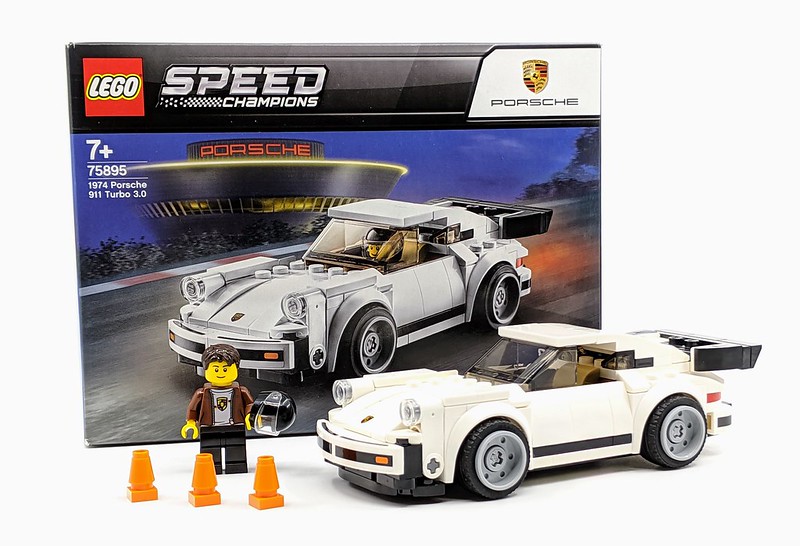 Porsche fans will love to build, race and proudly display the LEGO® Speed Champions 75895 1974 Porsche 911 Turbo 3.0. This white, collectible toy car model for kids of one of the world’s most recognizable classic sports cars features a minifigure cockpit with a removable windshield and is packed with authentic details, including the iconic ‘whale tail’ rear spoiler. A classic Porsche 911 driver minifigure and 3 cones to play out race scenarios are also included in this LEGO car set. Fans can add an exciting digital dimension to their racing play and ‘drive’ this car in the Forza Horizon 4 LEGO Speed Champions expansion pack (sold separately).

One thing I’ve found with the Speed Champions sets are their unique overall builds. Despite being around the same scale as a number of vehicles found in Super Heroes or LEGO City sets, they aren’t built upon a standard vehicle base. This is the same with the Porsche 911, various plates are used to create the base, along with four 2×2 round bricks with holes for wheel mounts. These aren’t really an usual element, but I’ve not really seen the used as a means to the connect wheels to before.

Compared to other Speed Champions builds, there aren’t that many unique or rare elements. There also aren’t any fun use of strange elements, like some of the others I have built. The use of the round 2×2 bricks is different, but these aren’t really usual elements like meat cleavers or NEXO blades. The rarest element used is the brick arch, it’s not appeared in many other sets since it’s introduction. 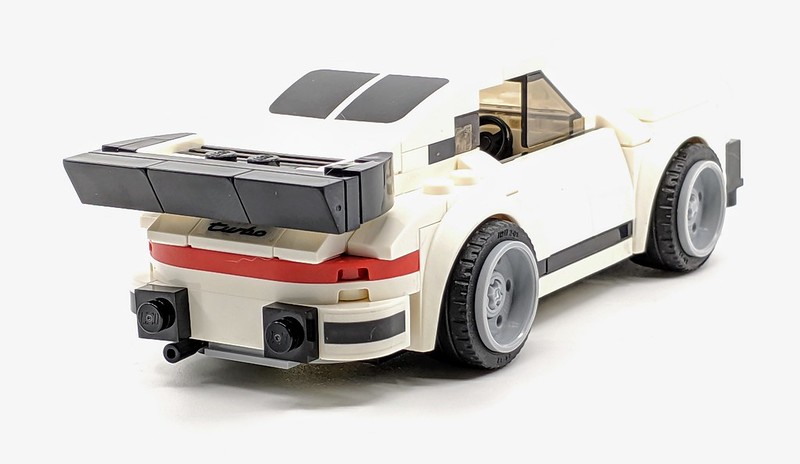 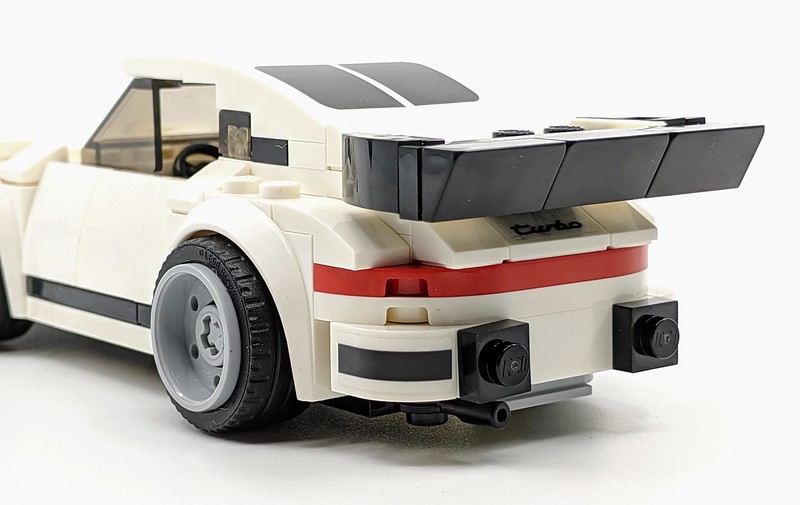 If you are wondering how this differs from the lime green version in the LEGO Speed Champions set 75888: Porsche 911 RSR and 911 Turbo 3.0. It doesn’t apart from the colour scheme. The build is identical in terms of elements and build techniques. There is also minimal used of stickers, with just a few on the bumpers and roof. 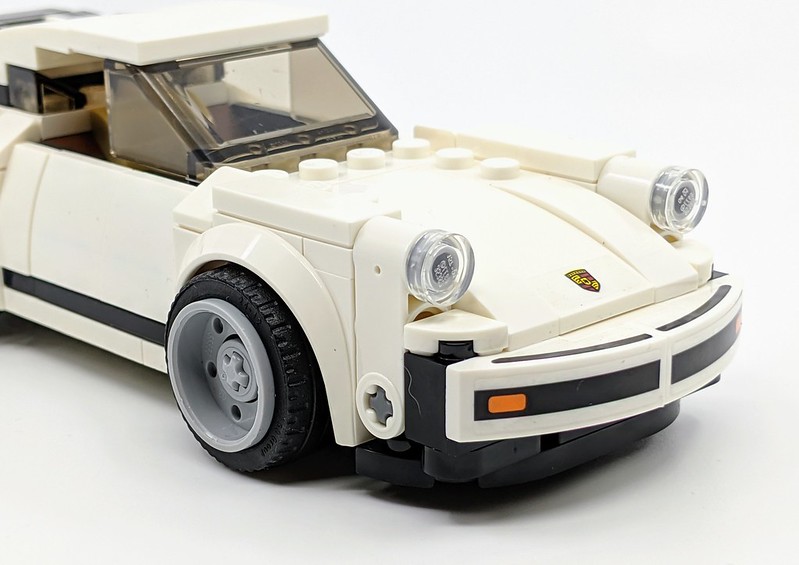 The fourth LEGO Speed Champions car to be driveable in LEGO Speech Champions Expansion Pack for Forza Horizon 4 is this exact one. Once you have fully upgraded your Master Builder House in LEGO Valley, you are alerted to a Barn Find. These are scrap cars abandoned in, as the name suggests, barns. The Porsche 911 Turbo, is the LEGO Valley Barn Find. If you’re already located it, next time you boot up the game, it will be added to your garage. In-game the Porsche is a little slow to accelerate and can be a little loose on bends, but has a decent top speed. 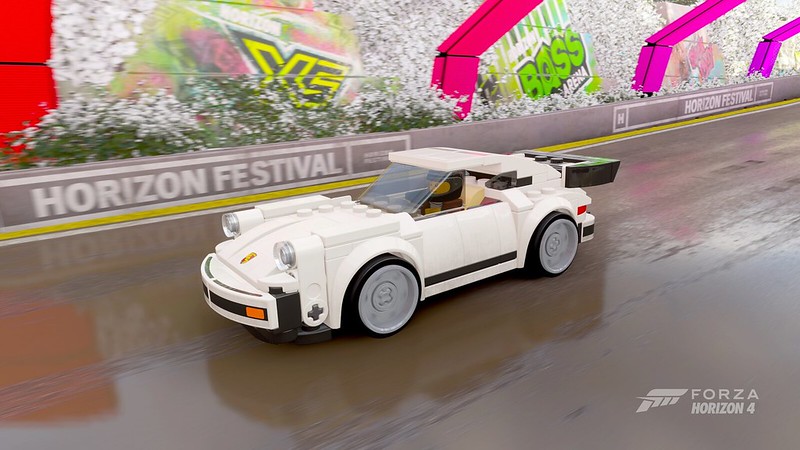 The generic Minifigure looks like a Top Gear presenter with his brown leather jacket and jeans. He’s also wearing t-shirt underneath, which features the Porsche logo. It would have been fun if the drivers shirt featured the Forza Horizon 4 logo, connecting it a little more to the game. Like many of the other Minifigures included in the Speed Champions sets, this one is fairly generic. He can also either wear a hair piece or racing helmet. 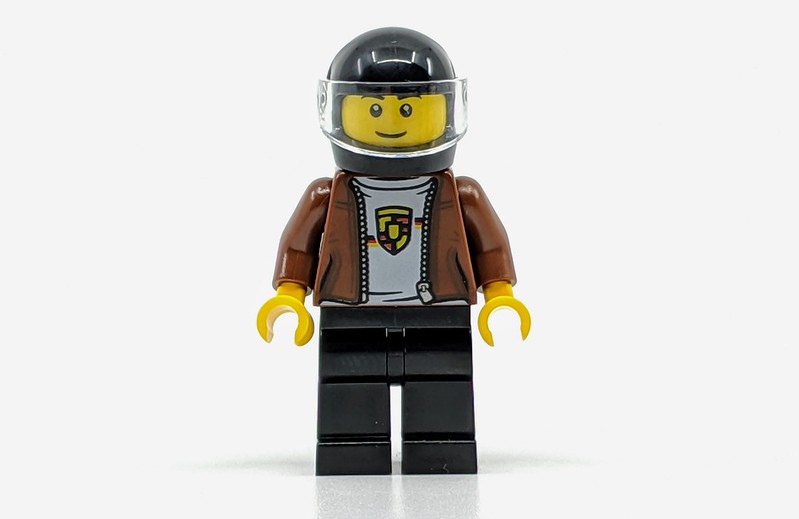 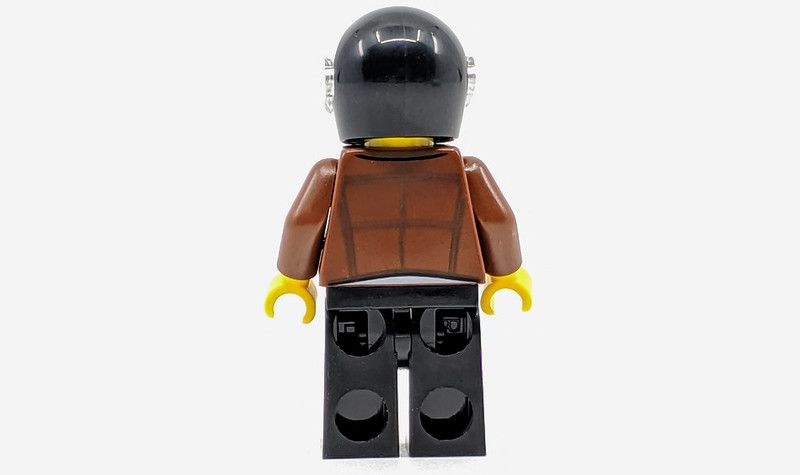 Some have questioned why this set has been released and I can understand why. It’s a little plain looking and the exact same build as the green version. But that was included in a more expensive larger set, meaning this set is much cheaper, should you wish to add it to your collection. Plus this ties nicely into the Forza Horizon 4 link up. If you want to learn more about the LEGO Speed Champions Expansion Pack for Forza Horizon 4, check out my review here. Plus you can read my other LEGO Speed Champions set review here: McLaren Senna | Ferrari F40 | 1967 Mini Cooper S Rally