Bricksburg has become a dusty wasteland, since the devastating events of Taco Tuesday and ongoing attack from the DUPLO® aliens, the Master Builders are doing all they can to fight back. That includes MetalBeard and his spaceship loving chum Benny. We’ve already seen that MetalBeard has a skill for becoming weird and wonderful creations. From his mech form in the original LEGO® Movie sets to his odd little crab-mech, I reviewed last week. But this has to be his most elaborate form, a clash of wood and metal, pirate and bike to create the Heavy Motor Trike. Let’s take a closer look at another of the new LEGO Movie 2 sets. The entire build is focused around MetalBeard’s epic trike form, which has all the hallmarks you’d expect to find on a pirate ship. The whole thing is built around MetalBeard’s ‘zero’ form which is his head, metal beard and treasure chest of vital organs. The build is MetalBeard in bike form, this isn’t a bike for MetalBeard to ride, he is a bike, which is why I like it so much. It’s everything you’d imagine a pirate-themed motorbike would be, anchors, ship’s wheel and crow’s nest, all combined with a mean looking motor, huge wheels and exhausts. It really is the perfect wasteland vehicle, if it wasn’t for the shark cannon and metal bearded pirate, you could imagine this chasing down bandits in a Mad Max movie. 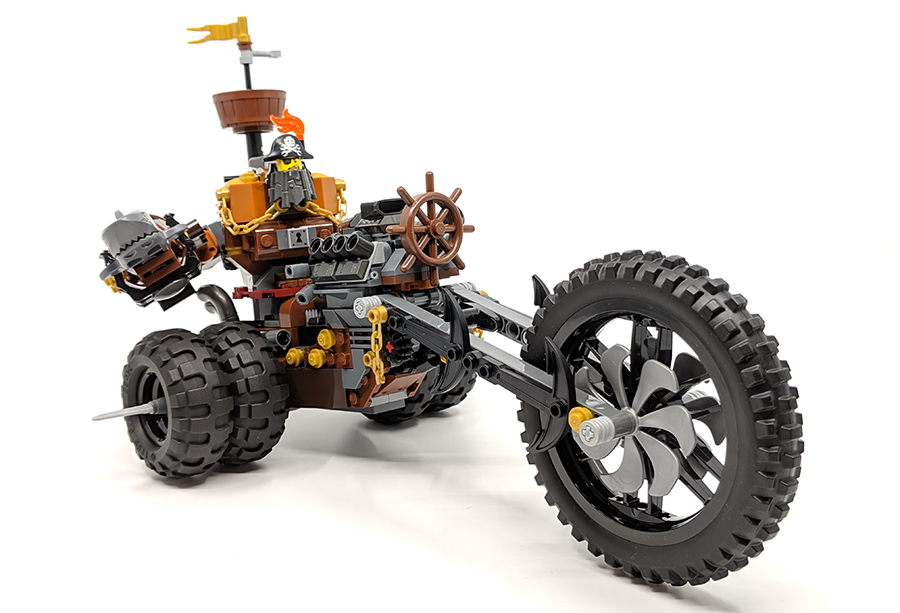 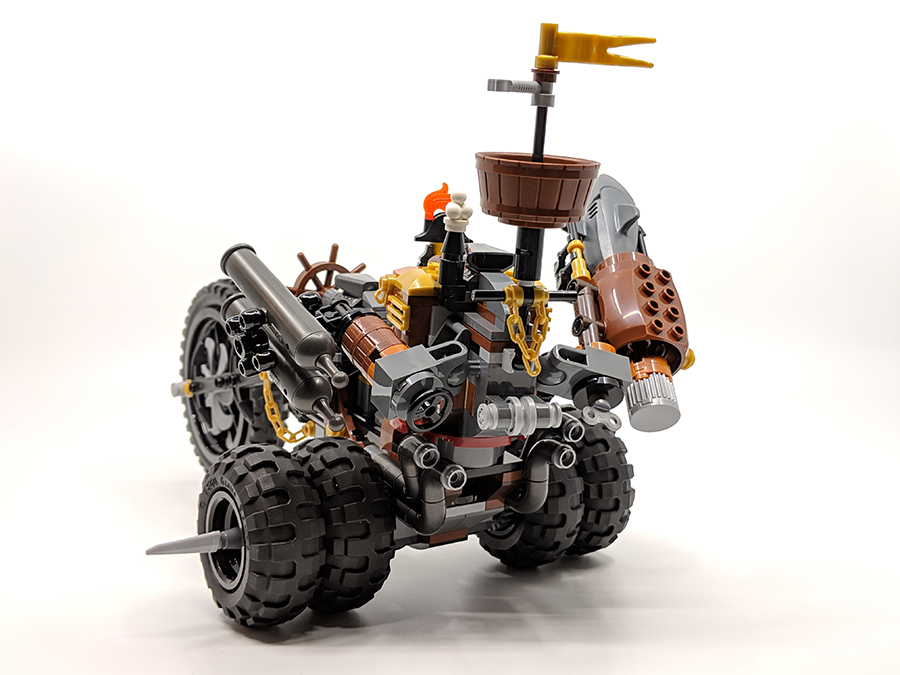 There is a great use of parts, reddish brown elements giving the appearance of the wooden remnants of MetalBeard’s fallen ship. A ship’s wheel replaces the fan on the engine. Anchors line the long bar used to connect the front wheel to the rest of bike. Then of course there are MetalBeard’s weapons, both of which work. On the left he has dual cannons, which have a spring loaded trigger, capable of firing 1×1 round bricks. On the other side is a device which fires sharks! 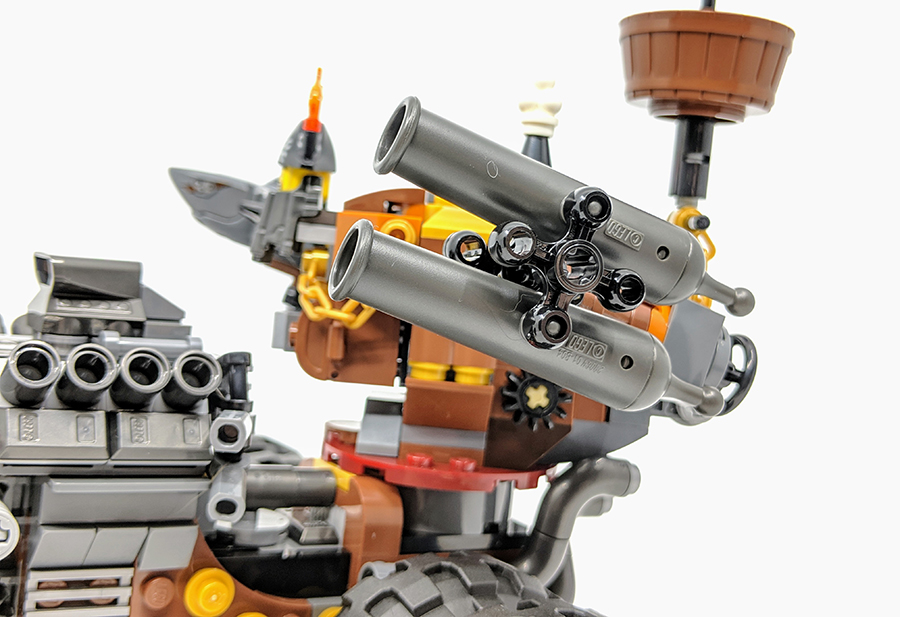 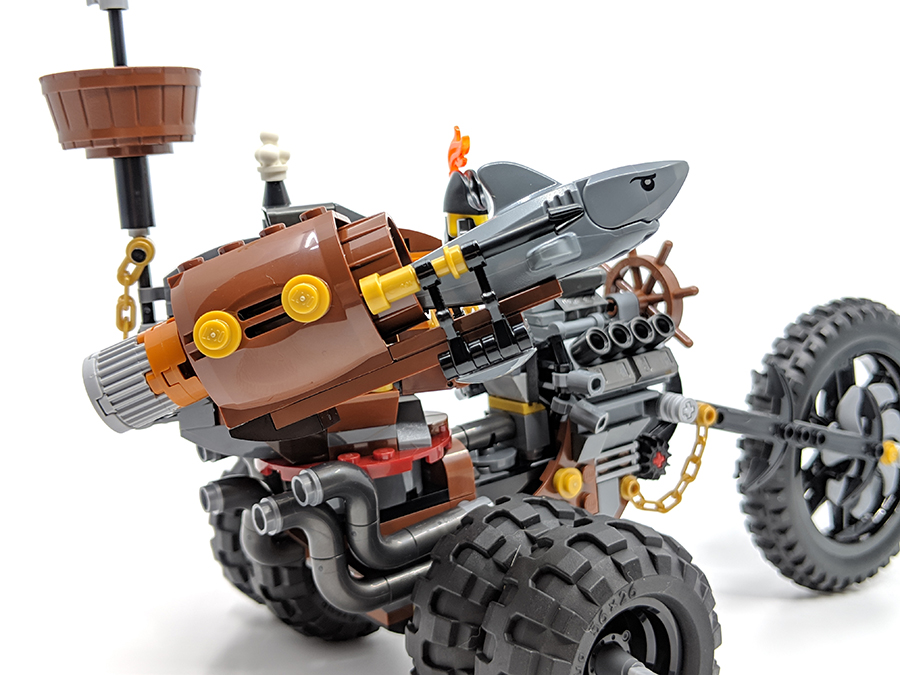 The shark missile features the newer print detail for the eye and even includes eye patch on one side. Well if you’re being fire from a cannon, you may pick up a scrape or two. The Shark Cannon works OK, with a simple push bolt inside a Jet Engine elements. Flicking the trigger launches the shark, not to the same velocity as the other cannons or flick missiles, but fun nevertheless. 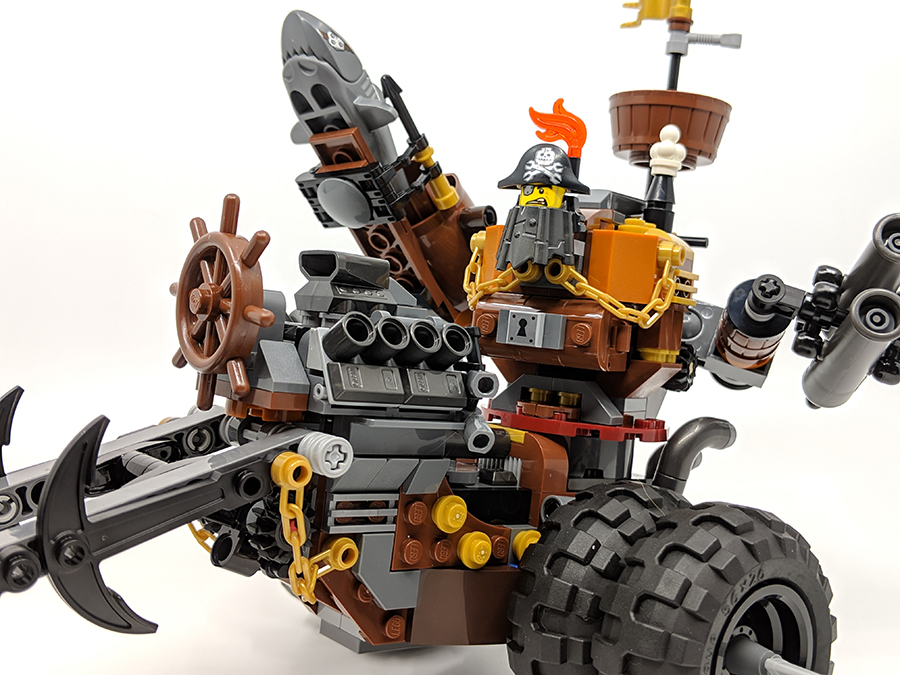 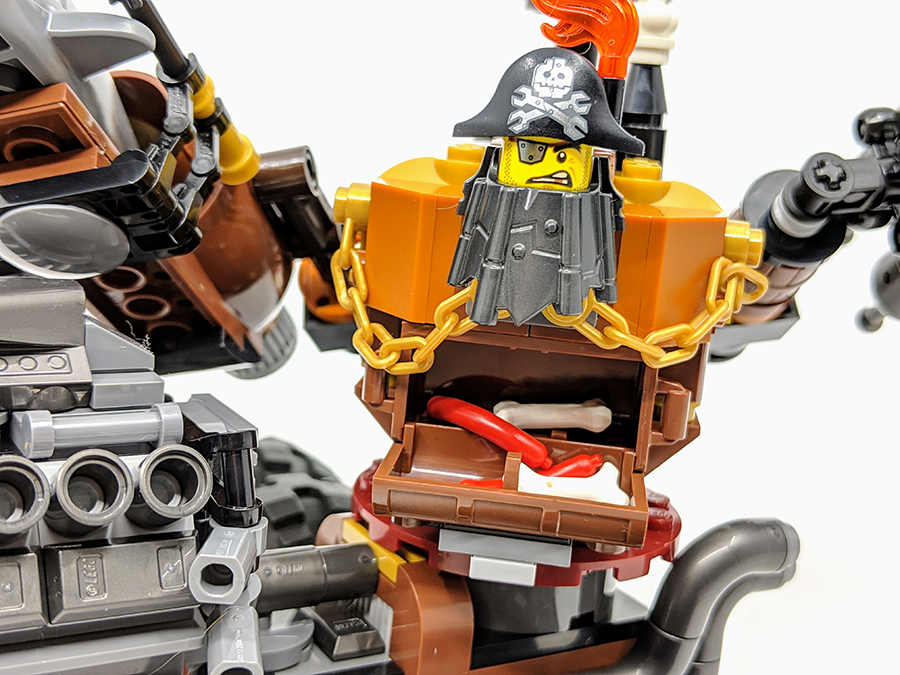 When compared to other incarnations of MetalBeard, you can see the Heavy Motor Trike, continues with a number of features the other versions contain, making the character consistent across sets. Which is nice as it’s inkeeping with the characters rebuildable abilities, already seen in the first movie and which will be expanded on in the sequel. The set includes three characters, General Sweet Mayhem, Star and Apocalypse-borg Benny. Star maybe a weapon, but is considered a character and uses a new star shaped element for the body section and a 2×2 flat tile, with a super cute face printed upon it. Delightfully deadly, I’m sure you’ll agree. Benny looks a little different in this set, although he has his trademark, faded Classic Space logo print and cracked helmet chin strap, he’s also sporting a robotic arm. How this occurs will no doubt be revealed in the movie. In place of a standard minifigire arm’s, Benny’s rightside limb is now a robot-style arm, the same used on some of the various robot characters in the LEGO Minifigures series for example. This has a clip wrench piece connected to it and I’ve seen images of Benny having a Mace there instead, so expect it to be interchangeable in the movie. Think Swiss Army arm. That’s not the only difference with Benny, as his helmet has a welder visor, which even includes print detail and he is also wearing a welding pack, complete with welder touch. This version of Benny is exclusive to this set, although a standard Apocalypse-borg Benny will feature in the upcoming Minifigures series. 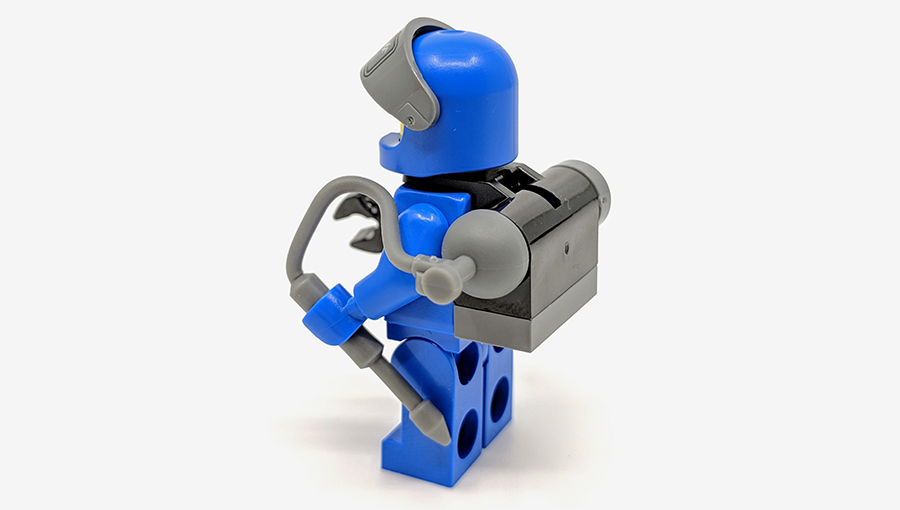 Sweet Mayhem is a Mini-doll and is similar to other versions featured in other sets. She includes a visor helmet, shoulder armour with backpack and clip-on wings plus that cool uniquely coloured hairpiece. Although similar to other versions, this sets Sweet Mayhem has a more aggressive facial expression and also includes a heart bomb, which is a new piece and two translucent blue booster jets 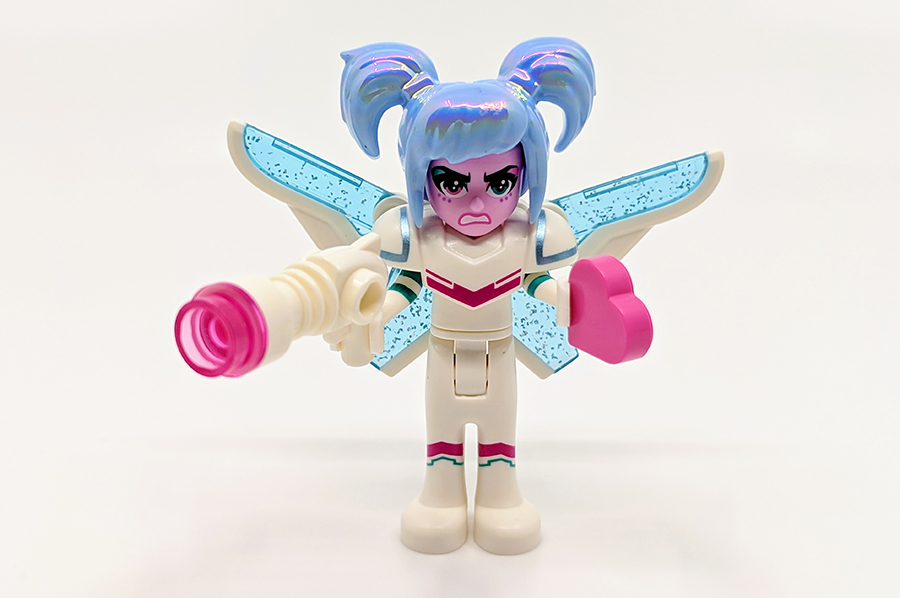 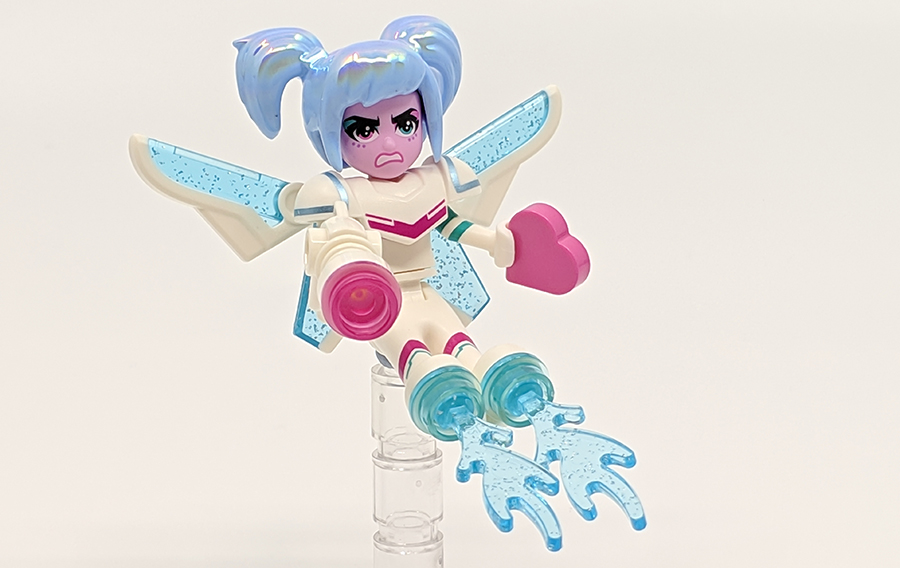 It’s a nice selection of character to have, especially the unique version of Benny, with his robot arm and welding kit. I also really like Sweet Mayhem, sure she is a Mini-doll, but she looks great, has some cool looking parts and you have to love that hair piece. 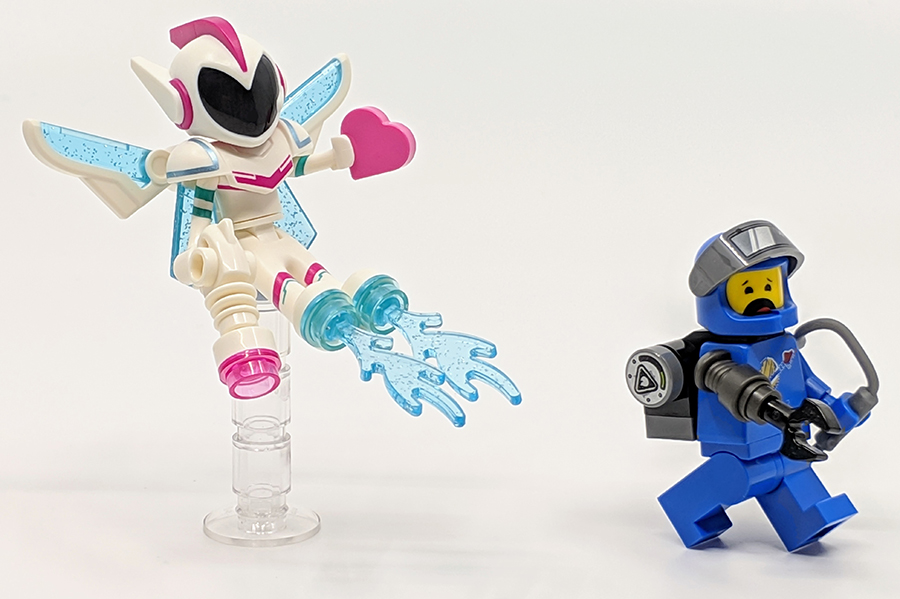 This is an odd set, as it doesn’t feel or look that big when building it. The finished build looks great and it’s a unique take on the character, but when compared to say Emmet’s House, a set with the same price point, this feels has it should be a little cheaper or at least feature a random piece of scenery or more characters. However I still quite like it, in particular how the build maintains similarities with other versions of MetalBeard, making it feel like you’ve take his original form and transformed him into another. Benny is also a big draw, especially if you want to collect all characters in all their varients. It’s a fun build, with limited play features but visually fun, with a great use of parts.