It’s time to continue with The LEGO® Movie 2 set reviews, and for this review it’s time to be more Batman. The Caped Crusader is back after his own big screen outing last year. With Apocalypseburg now a dusty wasteland, Batman is as dark and brooding as ever. Amazingly this is only set of the first wave of known The LEGO Movie 2 sets to feature Batman. Joining the Dark Knight is another character from the first movie, MetalBeard. This time around he’s looking a little different, maybe the battle against the DUPLO invaders took its toll on this salty sea dog. Let’s take a closer look at another The LEGO Movie 2 sets, with our review of set 70836: Battle-ready Batman and MetalBeard. 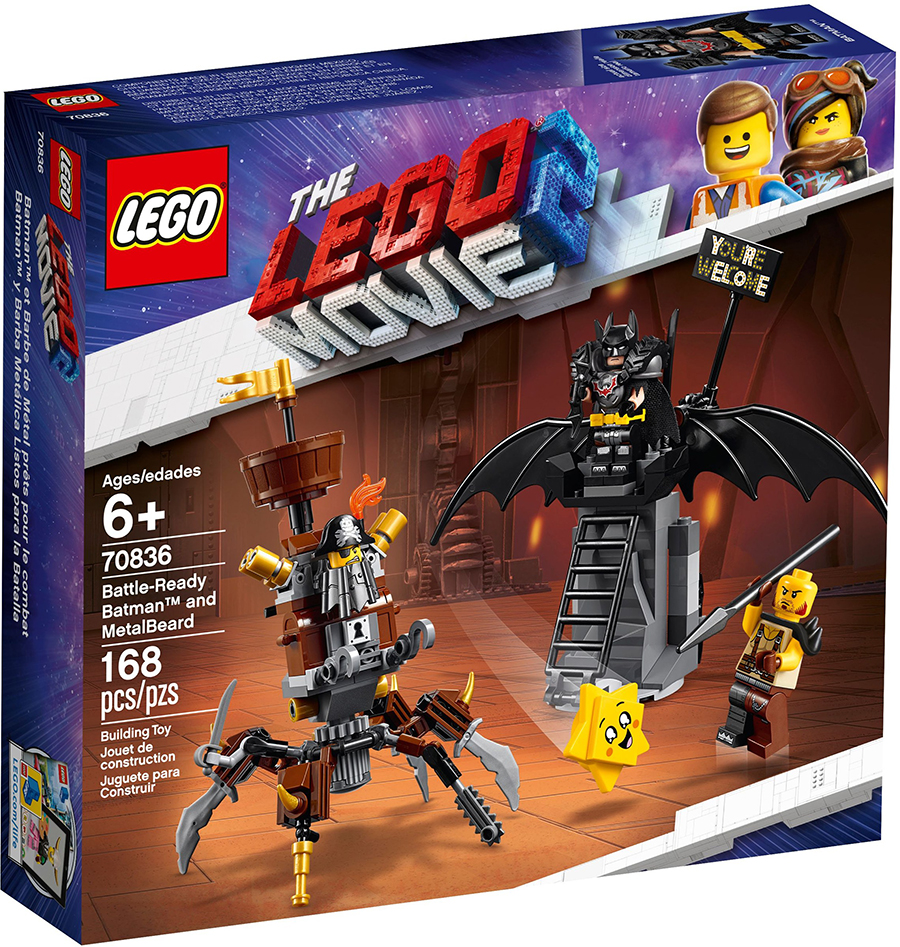 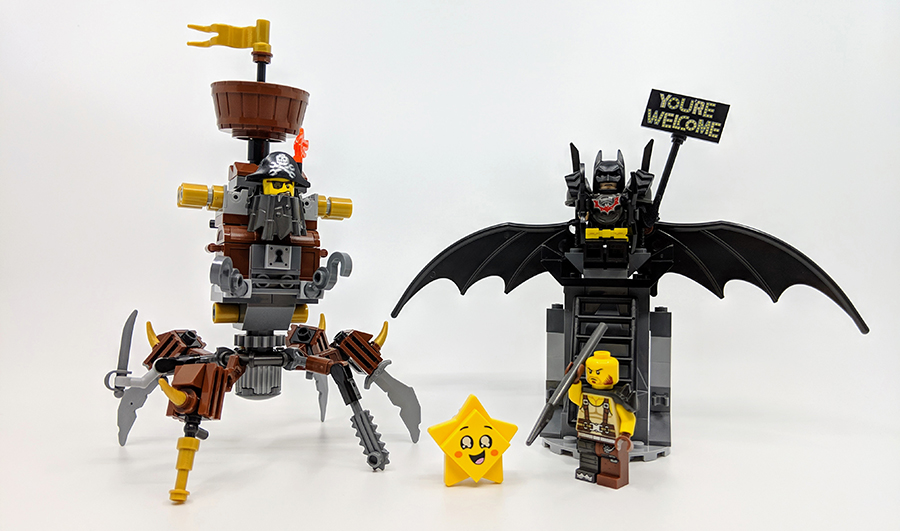 If you’ve watched any of The LEGO Movie 2 trailers you’ll have probably glanced Batman’s bunkers, which appears to be where the citizens of Apocalypseburg head when dangers in near. It may be grim in the city formerly known as Bricksburg, but that doesn’t stop Batman highlighting his self imposed importance for everyone to see. Which is why he has a throne, a bat-themed one naturally. Which is the first part of this set. The entire set is split across three bags, with the Bat-throne taking up the entirety of bag 1. It’s a fairly simple build, featuring a BURP rock, with a few slope pieces and a pair of bat wings. There is also a simple gear system, which displays the printed ‘You’re Welcome’ tile. The gear is a little awkward to turn, as the bigger gear is set centrally against the smaller gear, on which the sign is mounted. It just doesn’t feel natural to turn. Batman can easily be seated atop the throne, thanks to a couple of single stud topped 1×2 plates, which allow the minifigure to be seated, whilst still wearing that bulky new shoulder armour. 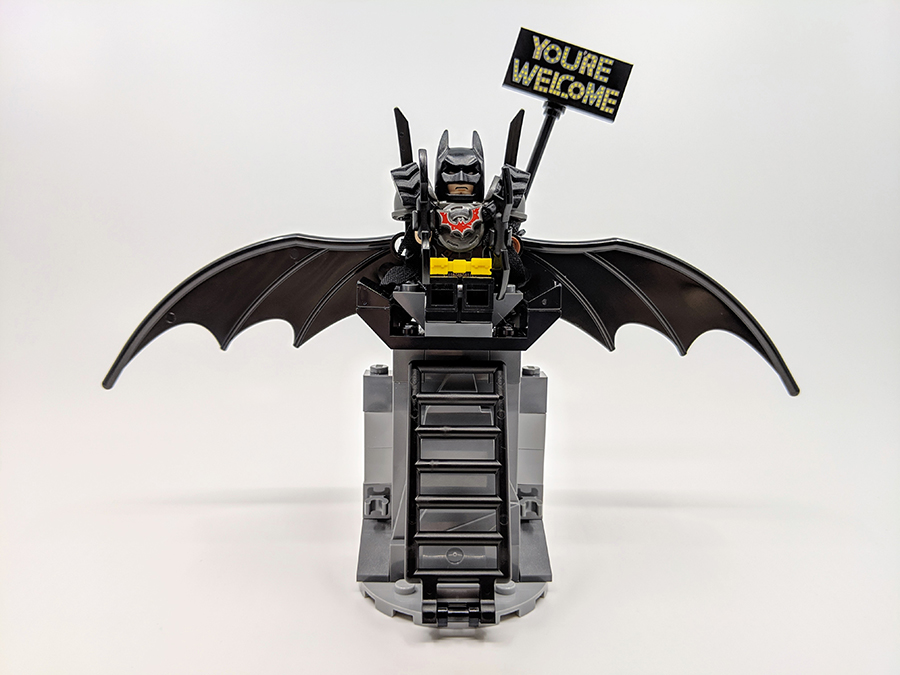 The rest of the build is focused on MetalBeard, who appears in his crab-mech form. If you remember MetalBeard from the first movie, he’s a Master Builder who had to rebuild himself after a failed attack on Octan Tower. His new body means he can transform into a number of odd creations including this ship-tastic mech. 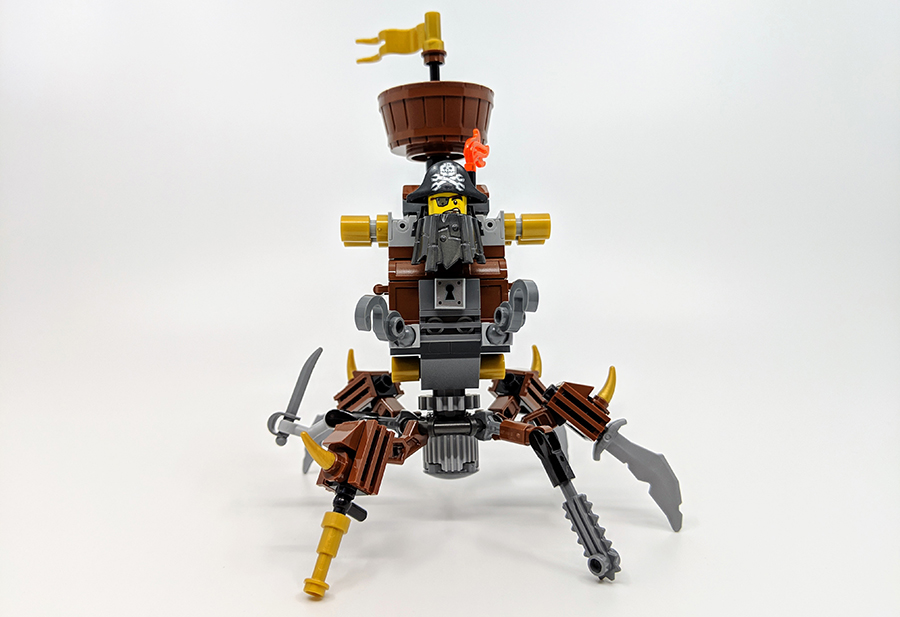 The look of MetalBeard is in keeping with his ragtag body, created from parts of ships. These include a crow’s nest, treasure chest, telescopes and cutler swords. I highly expected those mismatched legs, would be a nightmare to get the set standing, but they are surprisingly sturdy and you can even get some jaunty poses. I love how much character MetalBeard has considering it’s an odd mix of parts. Ever wondered what a pirate keeps in his treasure chest? No not treasure, sausages and bones of course. Which are actual MetalBeard’s internal organs! 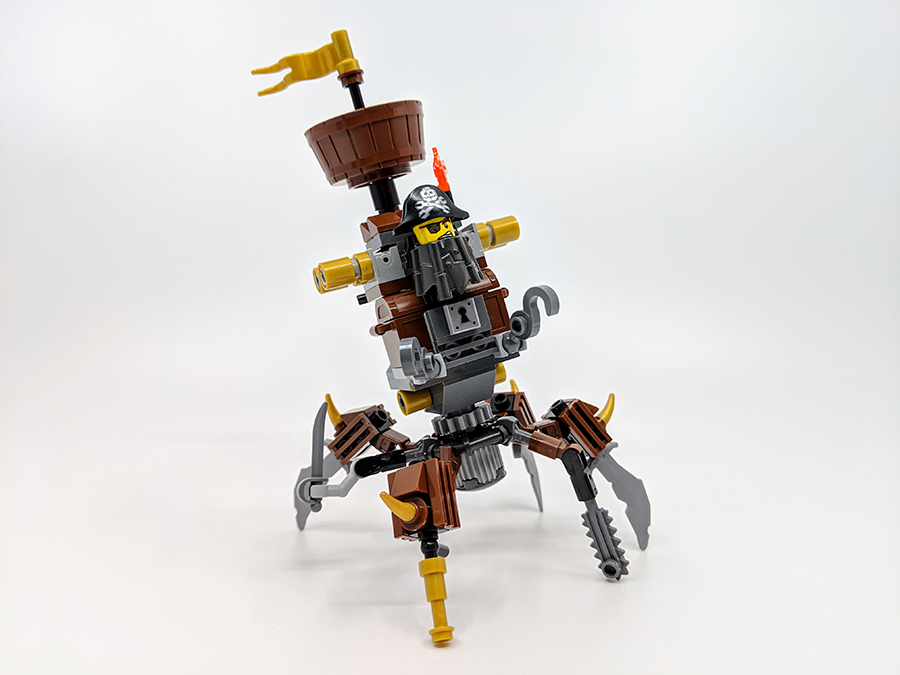 The set includes some new and printed pieces. The Star character has a star shaped element, which features a single stud. On which a 2×2 printed plates can be fixed to create the character. There’s a spiked shoulder pauldron, which will feature heavily The LEGO Movie 2 sets. As mentioned above the ‘You’re Welcome’ is also printed, shame it’s not a little bigger. Finally Battle-ready Batman has a worn and tatty bat-cape but best of all is his new, totally over the top new shoulder armour. As well as new red Bat-sign, it has for some oddly awesome reason two tire shoulder pads. And yes they are made from rubber, so are just like actual LEGO tires. The set includes two standard minifigures and the adorable bad-un simply named Star. Maddox is one of the many battle-hardened citizens of Apocalypseburg. He features that new shoulder armour element, a spear and some detailed print on both the torso and legs. Which have two different coloured materials. Star is a simple character made of just two elements. It’s adorable face and the fact it’s some sort of deadly weapon, perfectly sums up the humour of the entire movie. 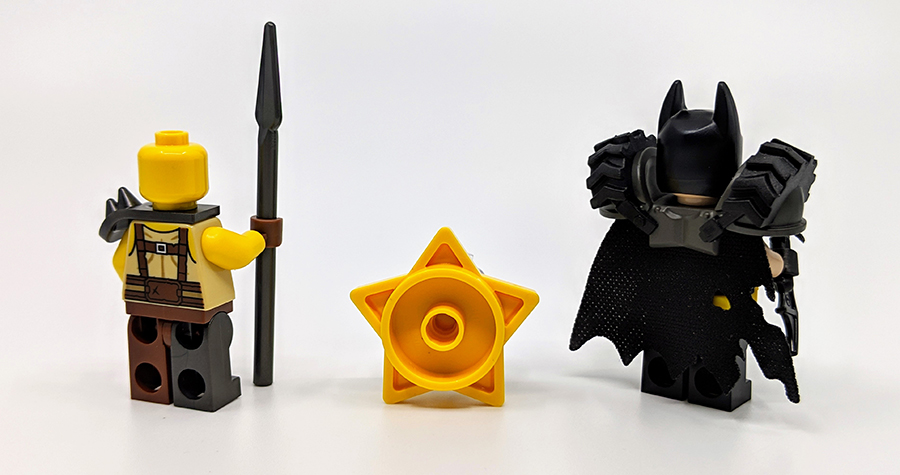 But it’s safe to say the main reason many will be purchasing this particular set is for a certain, black or really, really dark grey loving billionaire. Batman has taken to the apocalypse extremely well, not also does he have that special new Battle-ready shoulder armour, which makes him look like a heavy metal rock star, his torso and leg print also reflects a time of war. Instead of just placing a tatty cape and tires on standard Batman, he now has a slightly modified and fashionably sleeveless outfit. The utility belt element, which was introduced in The LEGO Batman Movie, now features on the LEGO Movie Batman as well, it would of looked a little better if in a brown colour instead of the yellow. I’m surprised this new version of Batman only appears in this one set. But in the same breath, I’m glad he’s not been randomly shoehorned into sets, forcing out another character. Although another smaller set from The LEGO Movie 2 range, it does have some fun features. The Bat-throne is a little underwhelming, but it’s more than made up for with the great new Batman minifigure. I’m also surprised how much I like MetalBeard. As mentioned, I really expected it to be a random mash-up of part than results in a iffy unstable build. But it’s totally opposite, only thing I’d would of liked to have seen would be some sort of studded surface within the Crow’s Nest, so you could place Maddox in there a little more stably. The larger-scale MetalBeard set from The LEGO Movie sets, was a great build and one I still have on display, although the crab-mech MetalBeard isn’t has impressive, it’s still a great version of the character.