Smyths Toys have revealed their top toys for Christmas and LEGO has may the cut, with the amazing Destiny’s Bounty set from The LEGO NINJAGO Movie taking the Number Two spot. We built and reviewed this incredible set a couple of months ago and it instantly became one of our favourite builds. Although it’s not taken the top spot, it’s great to see retailers getting behind such a good set. You can find set 70618: Destiny’s Bounty in your local Smyths Toys Super store and it’s also available online. 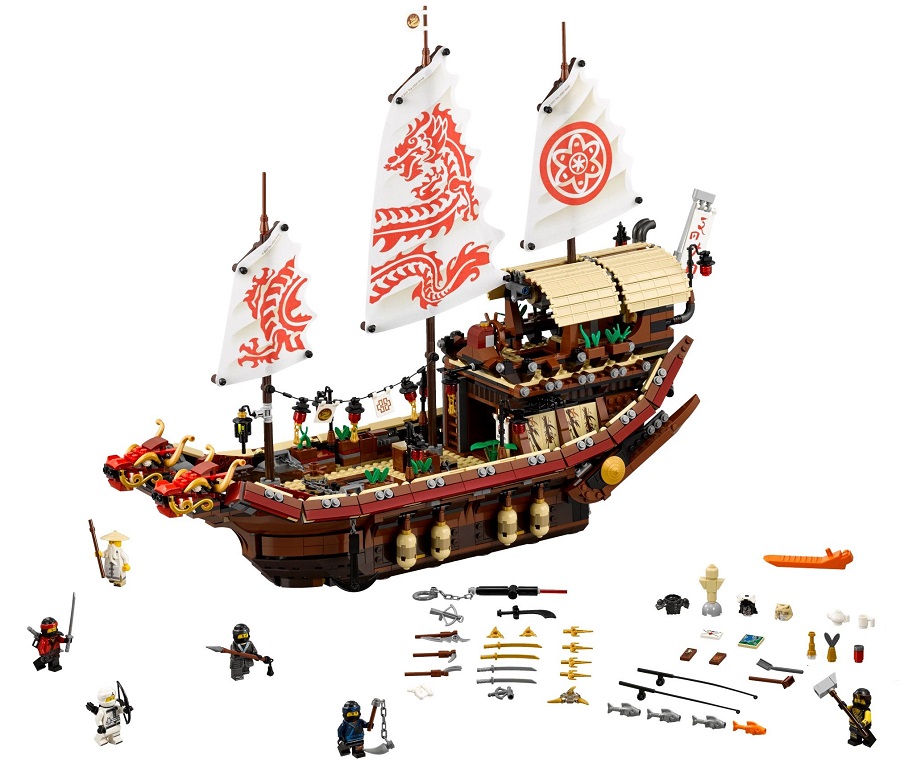 Build the incredible LEGO Ninjago Movie Destiny’s Bounty 70618! This highly detailed model of wise Master Wu’s flying ninja training base has everything you need to get your ninjas ready for battle.

Wind up the anchor and let the wind fill the decorated sails to set off on exciting Ninjago adventures! Train Kai, Lloyd, Zane, Nya, Jay and Cole in the dojo featuring a scroll, training dummy and 3 training weapons. The LEGO Ninjago Movie Destiny’s Bounty 70618 model has 3 modular levels with movie-inspired details such as an awesome double- headed dragon figurehead, a sky pirate’s skull handle and a chain of lanterns. Discover a cache of hidden ninja weapons under the deck. Uncover golden sails, silver and golden katanas, a crossbow, black stone warrior sword, 2 golden shurikens and an Aeroblade with golden blades, as well as the ultimate weapon: the laser-style pointer.

The hull features a bathroom and Wu’s bedroom with a bed for a minifigure. Navigate with the telescopes, a sextant and a map of the Ninjago world. Have your ninjas fish for dinner with the included fishing rods, keep the Destiny’s Bounty shipshape with a broom and shovel, and wonder at Master Wu’s collection of armour.

The LEGO Ninjago Movie Destiny’s Bounty 70618 set features 3 modular levels (top deck, Wu’s dojo and mid-deck/hull), a figurehead, 3 sails, 2 wind-up-and-release anchors, 2 barrels and 3 crates, Wu’s bedroom and a bathroom in the hull, plus a dojo. Includes Wu, Kai, Lloyd, Zane, Nya, Jay and Cole minifigures, plus lots of weapons and accessories for epic role-play adventures in the world of Ninjago.