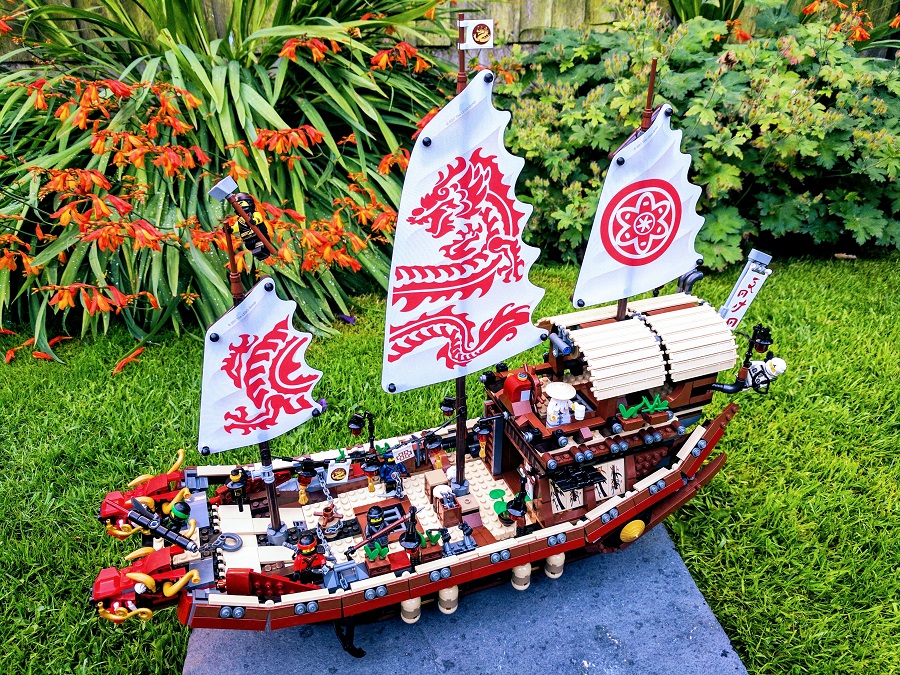 As soon as The LEGO NINJAGO Movie sets were revealed I was instantly drawn to the Destiny’s Bounty, as a fan of Japanese culture, it’s clear to see how it’s taken it’s design inspiration from Japanese architecture. The set contains over 2290 pieces and has an RRP of £119.99 (we managed to bag the set for just £109.99 which is even more of a bargain) but when I first started to build the set, I was a little disappointed as it looked like the hull of the boat was going to be quite small but boy was I wrong. Over the sets 15 bags, the seemingly measly dingy soon became an incredible vessel, bursting with detail. 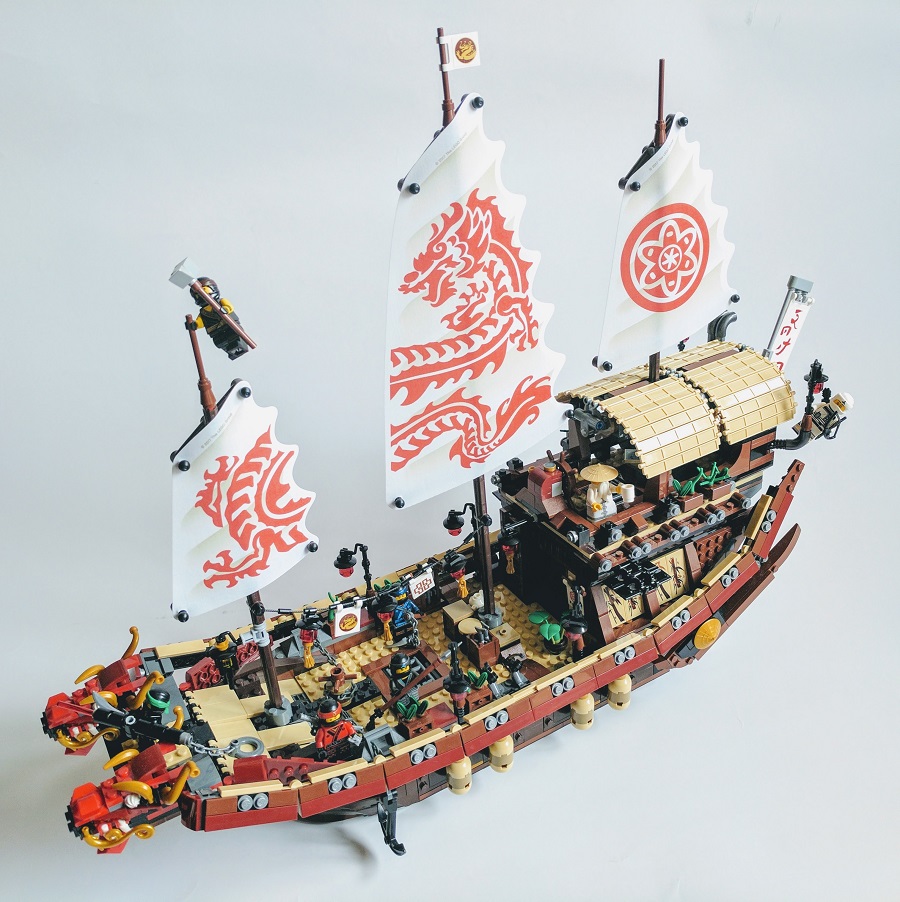 The build begins with the hull of the boat, combining elements in each of the numbered bags with additional larger pieces included in the box. As mentioned above once you’ve completed the main structure of the boats base, it does seem a little on the small side. However as you build further upon the hull, what really does appeared to be a disappointingly small set soon becomes an impressive sized build. 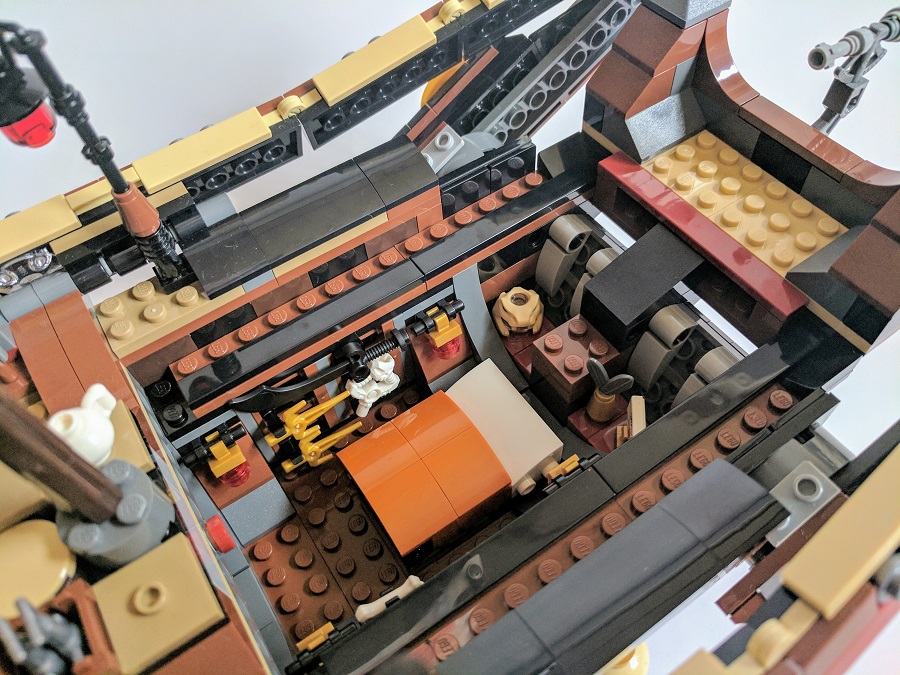 The sets size isn’t the only impressive thing about the Destiny’s Bounty, the level of detail it contains is magnificent, especially since much of it is hidden below deck. Wu’s quarters includes a funky little bed in which Master Wu can actually sleep and be covered up in. There’s even a little toilet with loo roll and sink. These sort of little details are often common place in much larger and expensive sets so having them present in a set like this is most welcomed. 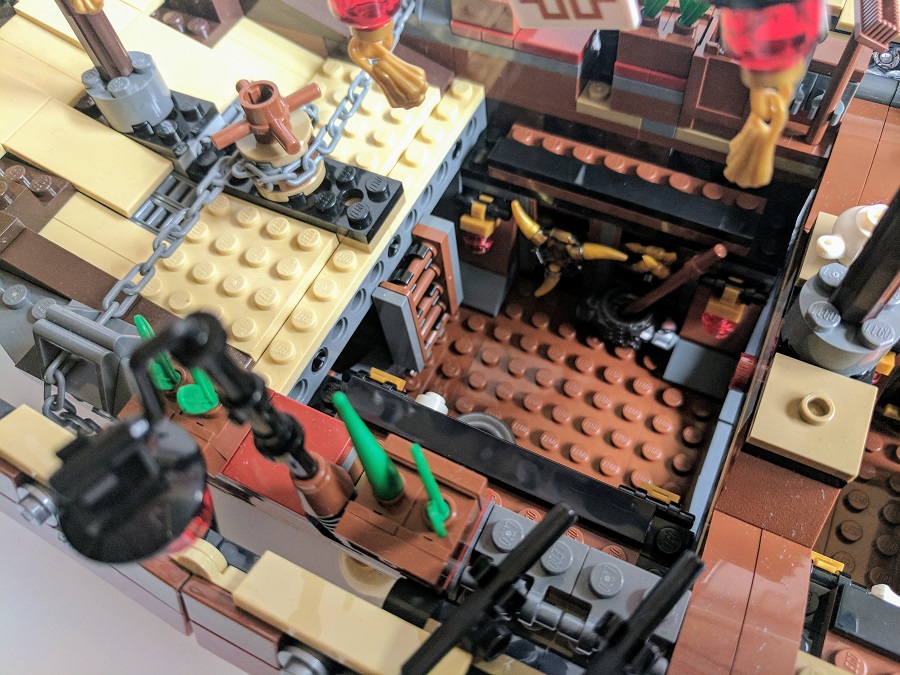 Wu’s room also features a lot of little nods to the LEGO NINJAGO theme and animated TV series – Masters of Spinjitzu, including an Anacondrai cultists helmet and Vermilion battle armour. In fact there are loads of little details and extra bits dotted below deck of the Destiny’s Bounty offering plenty of scope for play for younger fans. 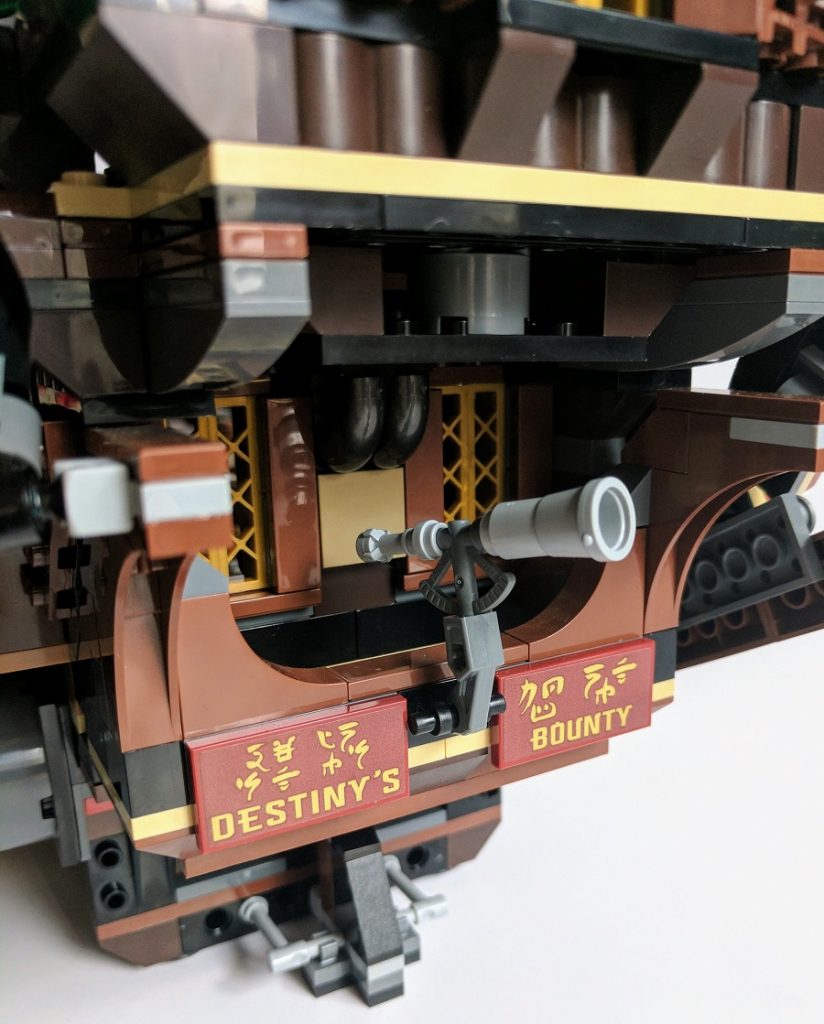 The hull is bulked out a little more thanks to a strip of bricks which are built separately and connected to the boat by a couple of ball joints. These allows for them to sit at a jaunty angle to the hull and gives it that unique Japanese look. The front of the boat has a duo of dragon figure heads, which seem to be causing a little dismay with NINJAGO fans as the Destiny’s Bounty is normally portrayed with a single dragon’s head. But I quite like the two heads, it give it’s a more unique look and works better with the width of the deck. The much of the deck area is built separately to the main body of the boat, this allows you to access below decks as well as providing even more areas of detail. One part of deck is a simple plate section which cleverly has a few barrels and boxes connected to it, sort of like a hidden handle, which helps when you need to remove it. The additional parts of the deck are a far more detailed and built as modular sections. 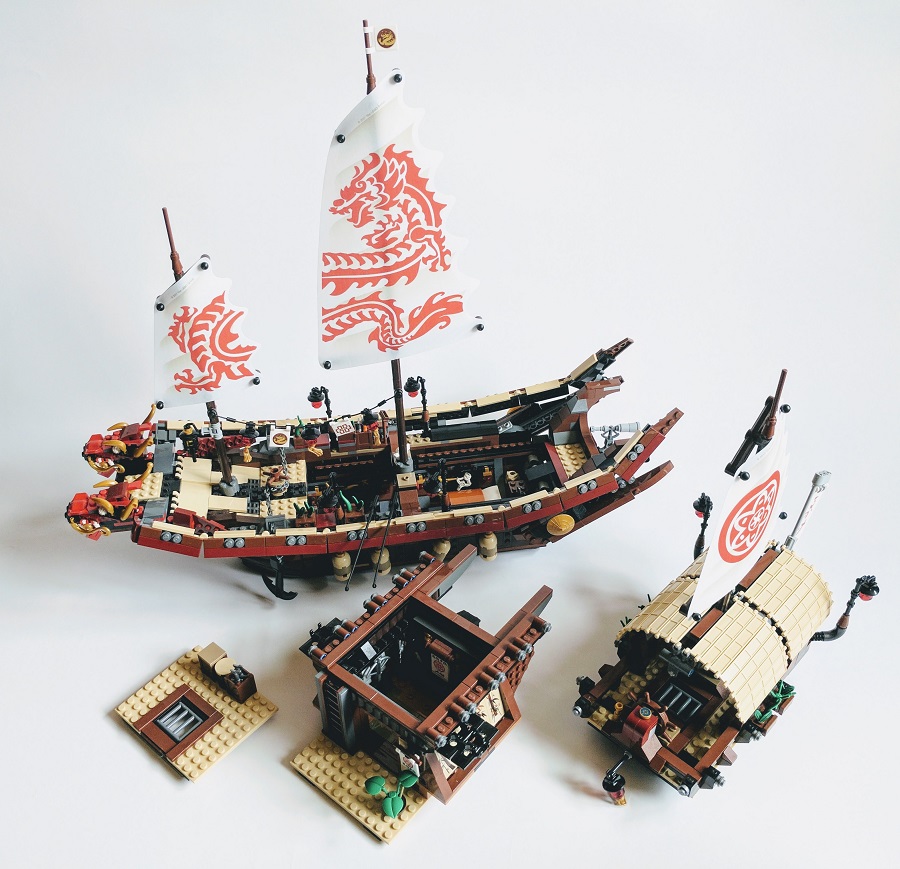 The first of these modular sections is the dojo, which is adorned along the outside with decorative ‘silk’ panels. Considering this section is part of a boat it actually does a pretty impressive job of looking like a dojo, albeit a rather small one. Here you’ll find some training weapons, a training dummy and the all important scroll of Spinjitzu, which is also found in the smallest of The LEGO NINJAGO sets, 70606: Spinjitzu Training. Above the dojo, is the boats cabin. This have a rather elaborate beam system in place to allow the bamboo roof to sit across the cabin section. The bamboo is actually the same elements used to create garage doors, which I have fond memories of from the old LEGO City sets. They are only connected at the top so can be peeled back to allow access to the inside of the cabin.

The whole thing is finished out with a trio of masts made from a selection of Technic elements and unique material pieces for the actual sails, connected to the masts with a number of ball joint elements. These feature fearsome red dragon across the first two sails along the same logo which is present on Master Wu and the back of the ninja’s outfits. 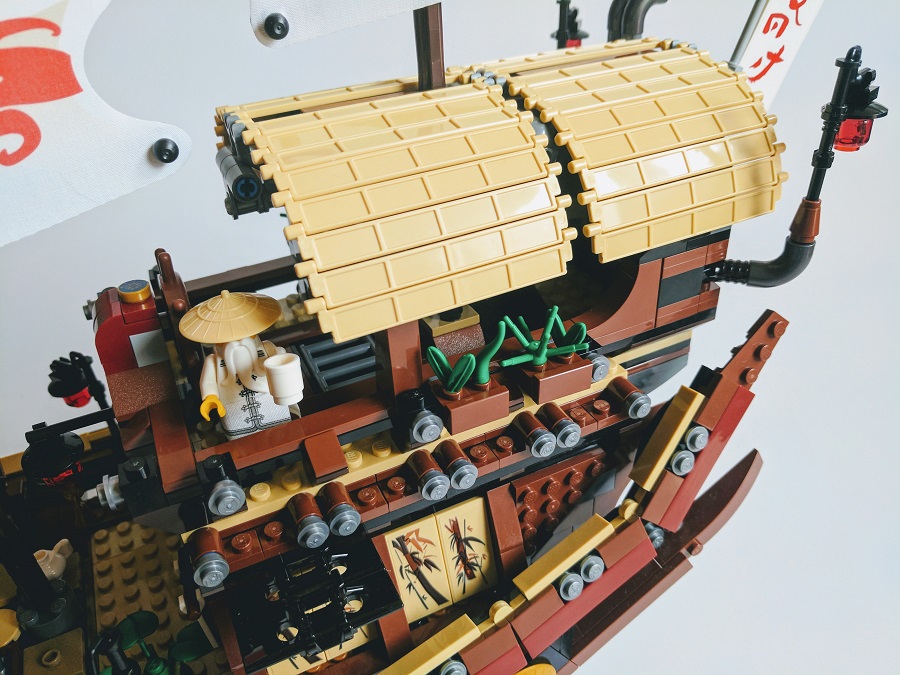 The set includes 7 minifigures and quite surprisingly that includes the entire main cast of characters and no bad guys! Yes Master Wu and each of the ninja are all present, dressed in their main ninja gear. This is mainly black, trimmed with the unique colours of each ninja. They also each have them new ninja hood, which is made of two pieces – one which sits between the torso and head then the other which connects as a hat or hair piece would. These fit together really well and look like a single piece. These hoods each feature the elememental sign of each character along with the Secret Ninja Force Spinjitzu logo on their backs.

It’s not just the colours of the outfits which make each ninja unique, there are slight variations to their designs such has Cole’s sleeveless top, Zane’s single colour hood and Nya’s additional material skirt piece. Each ninja also has their own weapon most of similar to what past versions of the characters have used. Which Lloyd also harnessing a super laser weapon, think Kragle from The LEGO Movie. This looks quite like a real world item and if you’ve seen the latest trailer for the movie, you’ll understand why. 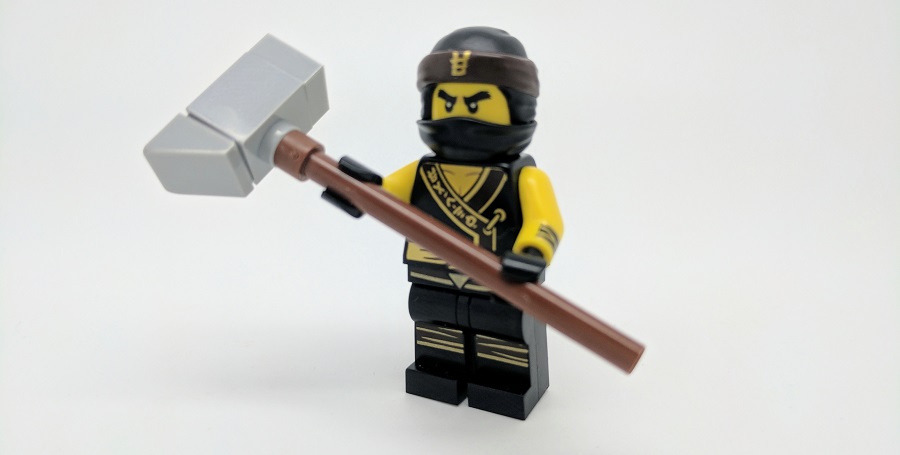 I cannot express how much I love this set. Not only is it a really fun build the finish set is a marvel to look at with an impressive level of detail. The overall size of the size is surprising and is more than a match for one of my other favourite sets, Metalbeard’s Sea Cow, which incidentally was also based on a LEGO Movie. But whereas the Sea Cow was a D2C set, with a few more pieces and a higher price point, in my opinion this set is just as imposing in size and detail. 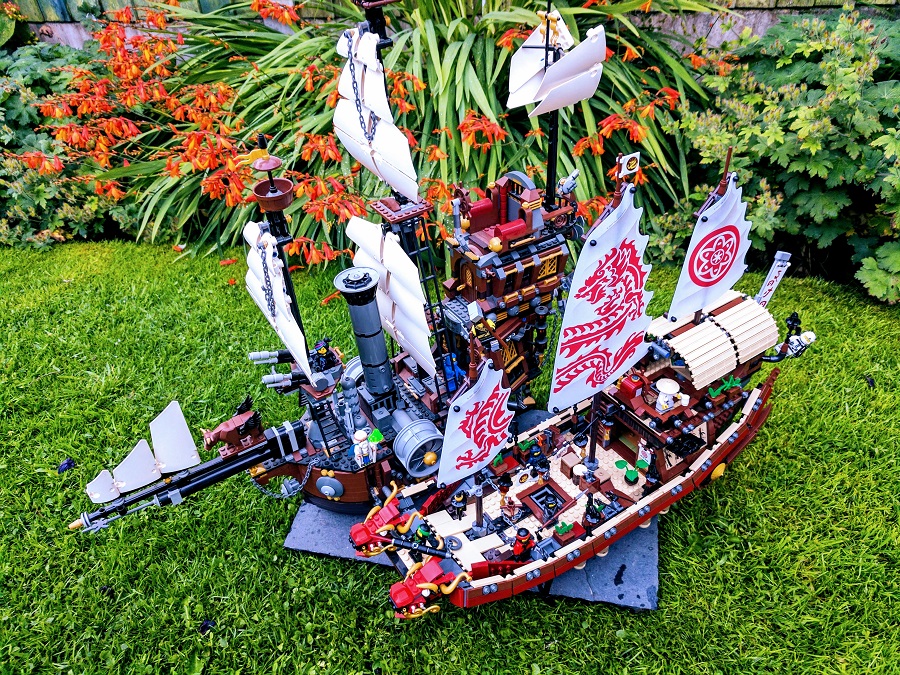 The minifigure selection is fitting for the set but also surprising that all the ninja are present. Although they are includes across other sets in the range, it’s very unusual for LEGO to have them all in a single set. It’s equally odd that an additional little build themed around a bad guy hasn’t been included. These are in no way bad things, in fact I quite like that the Destiny’s Bounty is the singular focus of the set. We all those sets that we have on display and never take down and so thing this is one of those sets for me. I absolutely love it and I’m sure whether you’re a fan of NINJAGO or not you will as well. I’d go as far as to say this could be one of the best LEGO sets released in recent years. Set 70618: Destiny’s Bounty will be available from August 1st from shop.LEGO.com and all good LEGO retailers.