One of the most anticipated sets, quite possibly, of all time is now available for LEGO VIP members and as soon as NINJAGO City was announced, it seemingly captured the attention of both NINJAGO and general LEGO fans alike. This huge new set is currently the third biggest LEGO set ever released and at over 4800 pieces it certainly takes a lot of building and features plenty of detail. The set is split across three distinctive levels, the story goes that as NINJAGO City is built on an island, as they couldn’t expand out, they expanded upwards. As the city grew with each new expansion, different eras of history could be seen in each level. The first level of which is The Old World, and the perfect point for the first part of our review of 70620: NINJAGO City. Read let’s see how it shapes up. 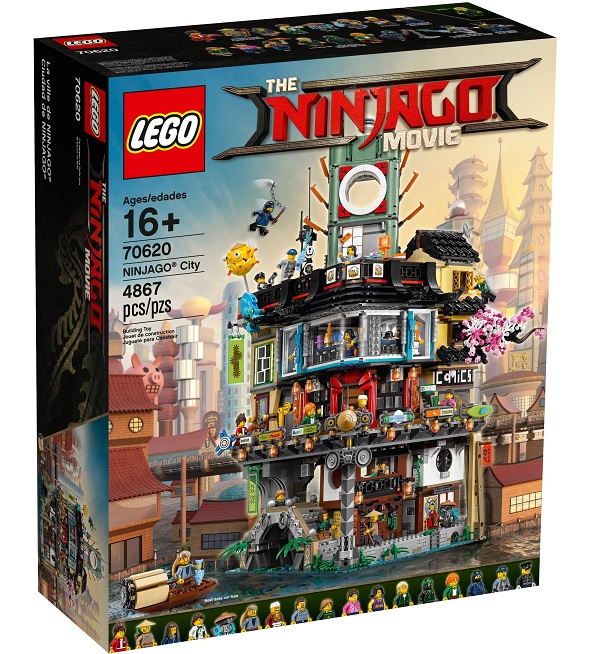 Enjoy endless role-play fun in NINJAGO® City, a hugely-detailed 3-level model connected by a sliding elevator. Level 1 features a traditional fish market, house, a bridge over a stream, and a fishing boat. The second level has a modern fashion store, comic book store, crab restaurant with ‘crab-grilling’ function and cash-dispensing ATM. The vertical city is topped off with Lloyd Garmadon and Misako’s apartment, a rooftop sushi bar with sushi conveyor belt, and a radio tower. This action-packed THE LEGO® NINJAGO MOVIE™ set also includes 16 minifigures and Sweep the maintenance robot.

The NINJAGO City set is built upon a classic 32 X 32 baseplate, which was a little worrying at first. These are fairly flimsy and for a set of this size I was a little concerned it would be a hard to move around. But as you’ll soon see, this rapidly ceases to be a problem as you begin adding the seemingly endless bags of LEGO parts. The first half of the build has you adding various plates and studs over the baseplate, in what seems a rather random manner. It’s not until you start adding more parts that you appreciate all these patchwork pieces. Masses of trans blue 1×2 plates are used to recreate the tranquil waters that lap around the streets of Old Town. These neatly cover those mismatch of pieces to create an impressive river bed. The combination of these pieces not only give the base a surprisingly sturdy feel but look amazing. Often builds with loads of little fiddly bits can get a little boring, but here the anticipation for what the final set will looks like really helps to jolly you along through these steps. 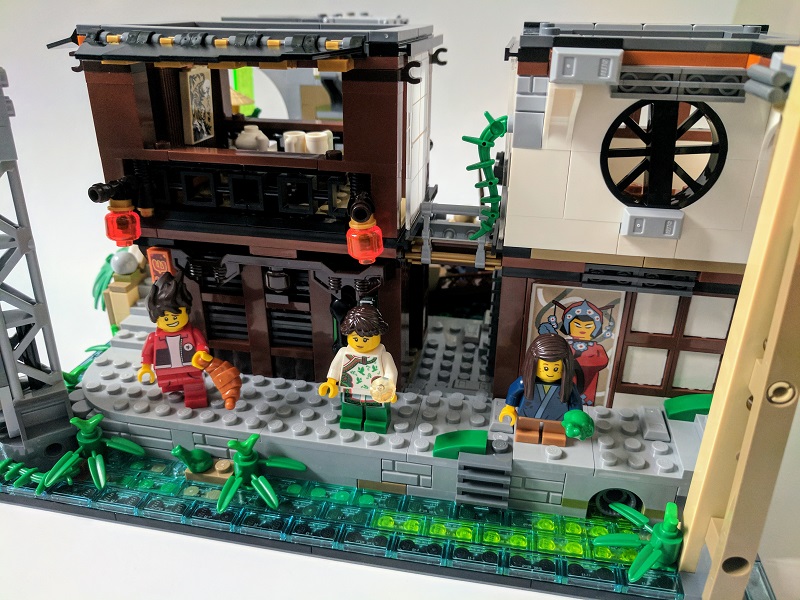 Once most of the base is complete you start adding in the streets and buildings, most of these are built in a modular way do you can easily access each of them. The Old World includes a Fish Market, a small residence and a maintenance station. Along with a great little bridge which has a lot of neat details, a telephone and small pier to allow the little fishing boat to land its daily catch. As the set is so bulky is near on impossible to access all the cool features with taking it all apart. Thankfully this has been built into the design of the set. Not only does it feature three distinct levels, the buildings and rooms can easily been accessed thanks to here modular design and flat plate, single stud connections. 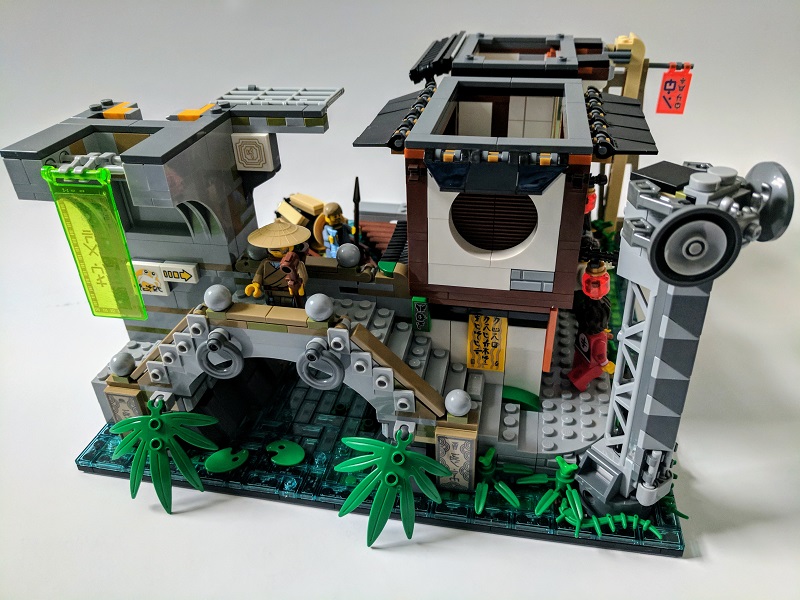 Above the Fish Market is a Tea Room and opposite is an additional room to the home area. You’ll also notice the third section of the Old World is an odd yellow and grey track, this forms the beginnings of a lift which runs the entirety of the set, to allow the residents of NINJAGO City to access each level. Despite the small size of the rooms and buildings, they are packed with detail, which is where Old World really comes into its own. 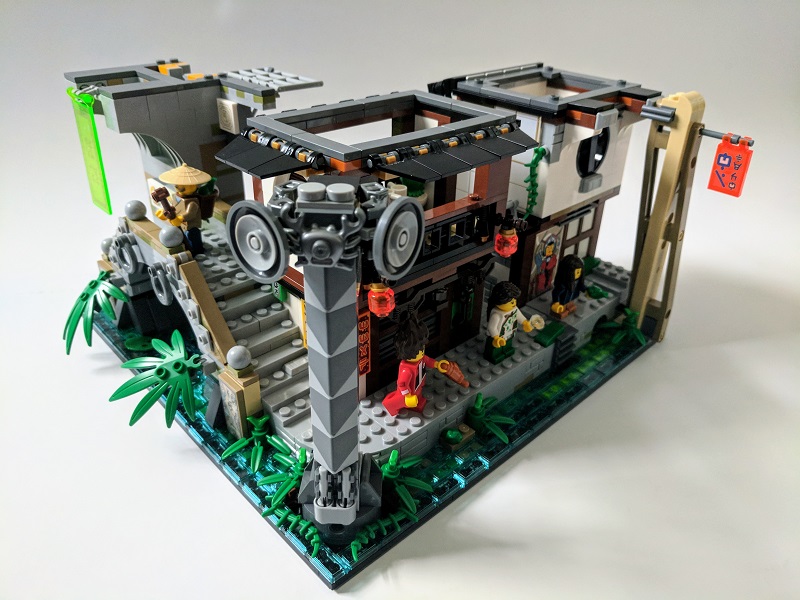 Beyond the sets impressive level of detail and obvious size, the most impressive thing has to be the use of elements. The LEGO Design Team have completely outdone themselves with NINJAGO City. From using crowbars to create a roof for the Fish Market, to using a recoloured Artist palette as lilypads. The use of these accessories or Minifigure elements is amazing. The Tea Shop even has a green version LEGO Star Wars Rebels’ Sabine hairpiece has a pot plant. 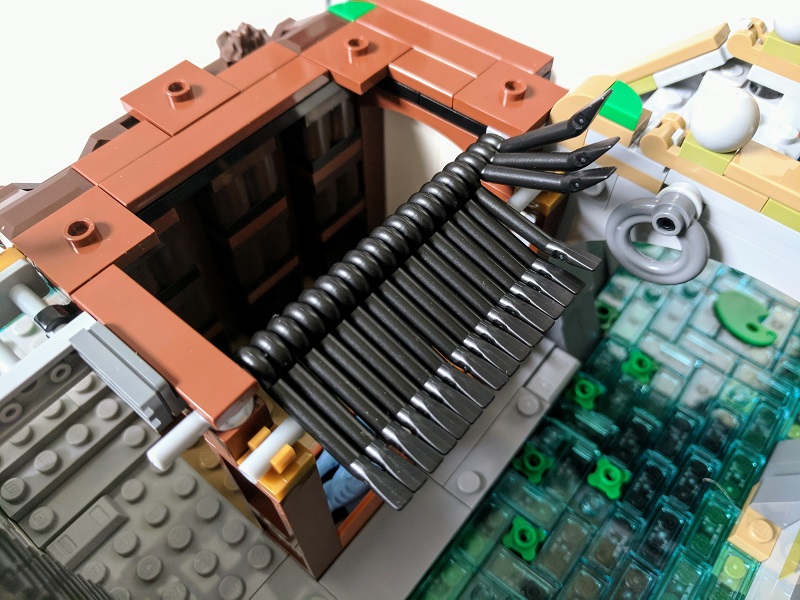 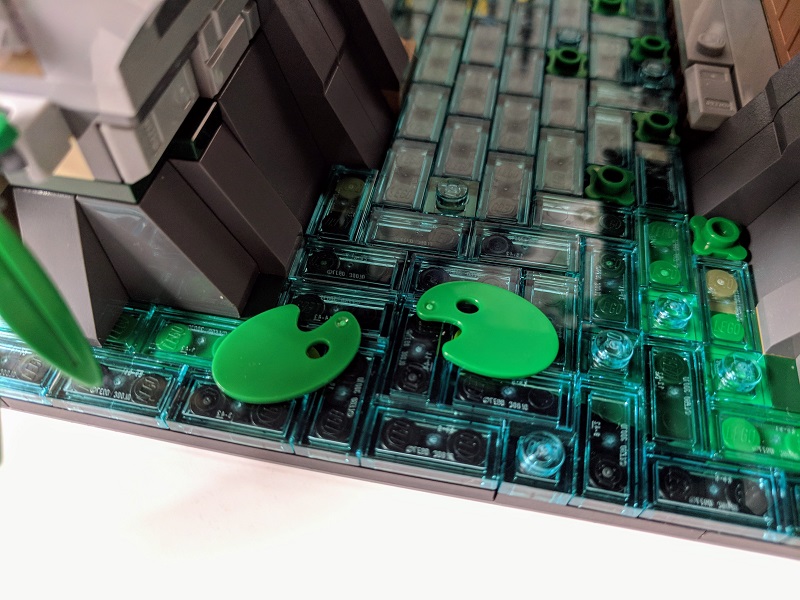 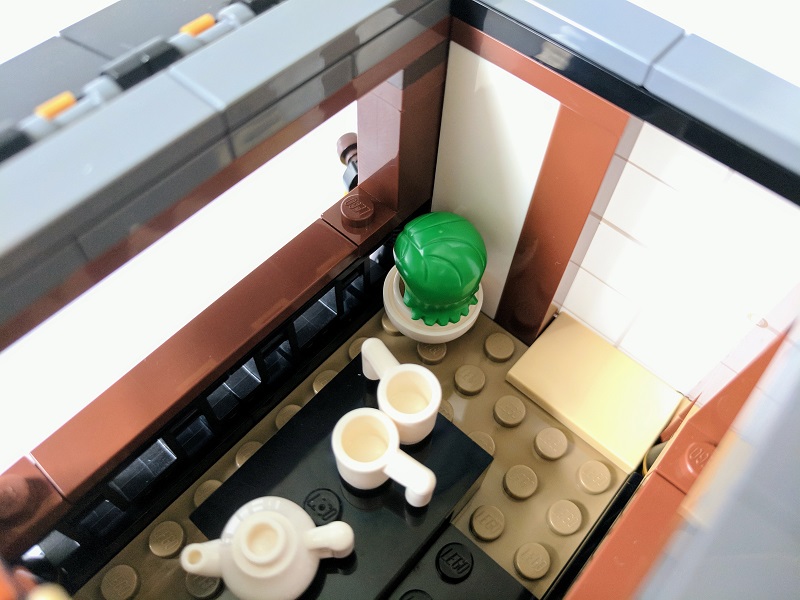 It’s not just unusual elements used in genius ways here either there’s a few new or rare parts on show as well, including the odd horning, a new black orientatial fence, round 1×1 plate with handle, 1×3 plate with 2 studs, 2×2 plate with two studs, and the extremely useful 1x1x2 with two studs. There’s also a lot of recoloured or newly recoloured elements most surprising of which are a fair few Technic pieces. It’s not very often these get any variation on their original colouring, which has lead to to some pretty iffy colour mismatches in past LEGO sets. Hopefully this is a sign of things to come, as the Technic parts collection has increasingly become part of standard LEGO sets in recent times. 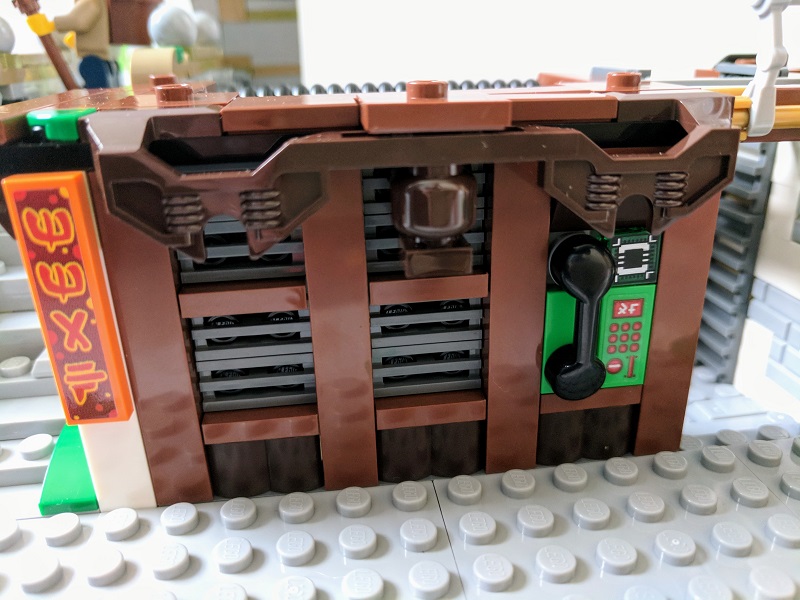 One of the most asked questions when the set was originally announced was if it could be added to other LEGO Modular sets. Well the good news is, absolutely it can. It may not be part of the Creator Expert range of Modular buildings but the base of NINJAGO City has the necessary Technic pins and connector bricks to allow it become part of your Modular displays. A special mention must go to the instruction booklets, the set features three separate manuals, each of which are focused on the individual levels. They aren’t just your bog standard affair, as they appear to have taken inspiration from such sets as the LEGO Ideas ones, which have a little extra material beyond just the building steps. You get the story of each level and the characters which live there plus in The Old World instruction booklet, there’s an interview with the director of the movie along with the sets designers plus there’s a NINJAGO language translator which will help you decipher all the signs dotted around NINJAGO City. For a set the size of NINJAGO City you’ll expect a nice array of citizens to inhabit it. The set includes 16 Minifigures along with a buildable character. The Old World features 6 of them.

Kai aka the Fire Ninja appears in his civvies, a red sports trucksuit. This version of Kai is exclusive to NINJAGO City and is a nice addition to the line-up and I like how he’s just plain old Kai, no additional pieces to make him a master of Spinjitzu, just a regular Joe, you expect to see pottering around NINJAGO City. Kai has a double printed head and comes complete with a delicious croissant, even if it’s a little unclear where he got it. 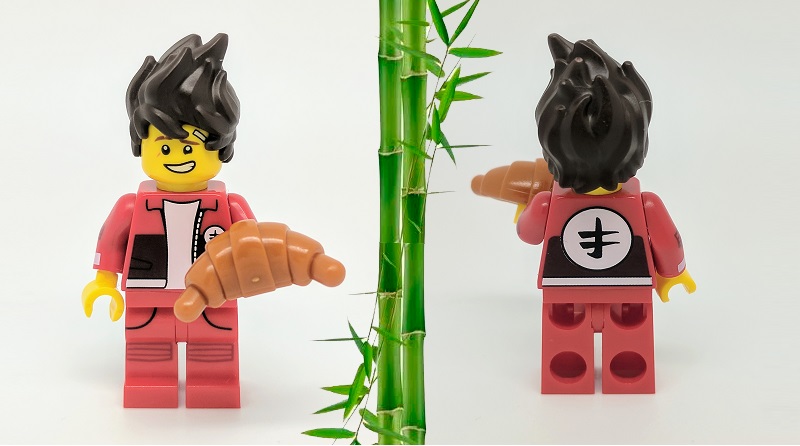 This old Villager character is my favourite of the whole set. The Japanese influence shines through with his conical hat, old yet simple robes and bucket backpack, which is home to a little green frog. He looks like he’s see NINJAGO City evolve through many changes and has a story or two to tell. A simple but great character. 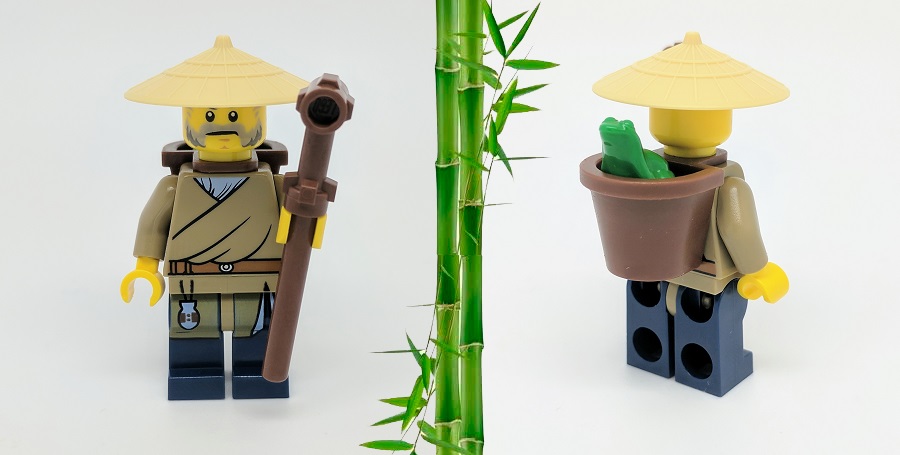 One of the youngest citizens of NINJAGO City is Sally, a fairly drab looking character, partly due to the lack of details on the short leg element. However she has a smiley little face and a pet frog which makes here a little more interesting. 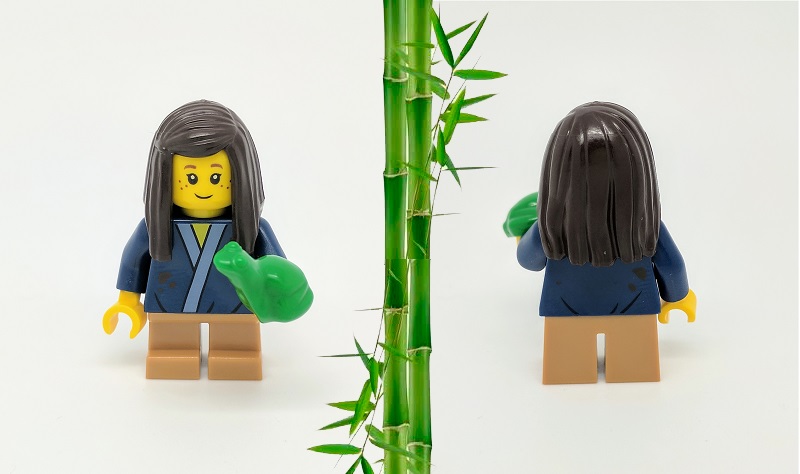 Ivy is one the sets most impressive looking characters, her traditional kimono-style outfit has some amazing detail and colours, which features on the front and back of the torso along with the legs. Judging by Ivy’s surname, she is related to Jay, I assume it’s his Mum but with the slight tweaks to the NINJAGO story, she may be related to Jay in another way. 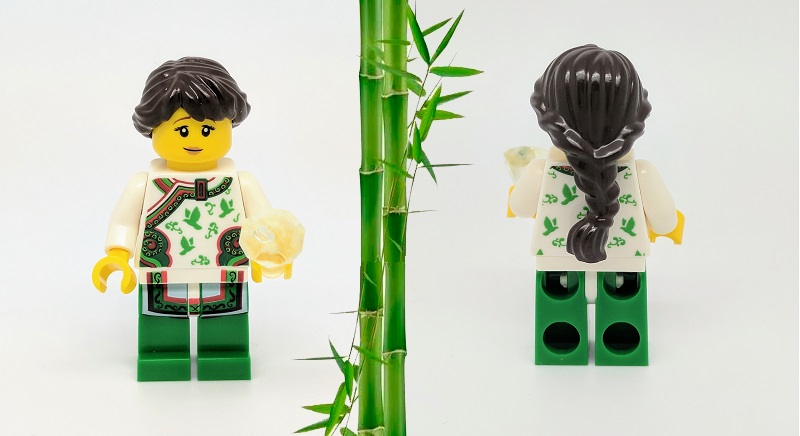 Sweep in the sets only Buildable character, which has an air of NEXO KNIGHTS about it thanks to the use of similar parts to Squirebots. It features a little oriental hat and the tools needed to keep the streets of NINJAGO City clean.

Konrad is the sleepy fisherman and proprietor of NINJAGO City’s Fish Market. He’s a little more jolly looking than the similar Jamanakai Villager Minifigure. Konrad also has a conical hat, but it’s connected to his back with a neck connector. 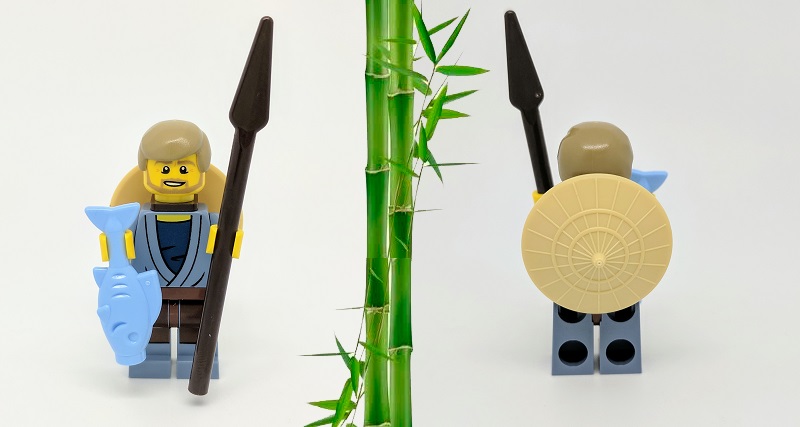 Only a third of a way through the build and already it’s packed with more details and fantastic use of parts than most full LEGO sets. I thought the Destiny’s Bounty was this years best set but already NINJAGO City has swiftly taken that crown. Sure it may be out of most peoples price range, but it’s certainly worth every single penny. Never have I built a set with so much positivity surrounding it and from what I’ve built so far, I can see why. The Minifigures are great and fit nicely with the surroundings of the Old World. If you’ve been tempted by the set, don;t bother waiting for the rest of the review, order one day and get ready to enjoy one of the best LEGO builds EVER! NINJAGO City goes on general sale from September 1st but is available now for LEGO VIP members. Check back for our reviews of the new two levels and overall thoughts of NINJAGO City.