Now I was going to review these new LEGO® BrickHeadz set when they first came out, but unfortunately, the Budgie set was missing an incredible 61 parts and the replacements have only just arrived. Anyhoo, this year the LEGO BrickHeadz theme branched out with the new Pets sub-theme. Joining the first two sets, which featured a pair of Cats and Dogs, the latest buildable pets add Goldfish and Budgies. These once again offer a unique creation that follows the equally unique style of BrickHeadz. So here’s a closer look at both sets, which each include a standard BrickHeadz character and smaller Buddiez build, along with a unique display base.

Totally unrelated to the build or opinion of these sets, I love the choice of colour for the budgie. When I was younger I had the same style of green budgie, called Mickey. Now like many of my pets, Mickey wasn’t right in the head and often tried to get a little frisky with anything in his cage – a fake bird toy, the mirror and even a cuttlefish. This earned him the nickname ‘Micky the Bonking Budgie. So these sets brought back that fun childhood memory.

Each set includes a standard-sized BrickHeadz character along with a smaller companion, which has been unofficially dubbed a Buddiez, although this format is slightly different for the fish. In place of a simple black display base, each set includes a much larger display stand. These are similar to the decorated display plates found in some of the seasonal BrickHeadz. Each display base includes different stickered bow plates to affix to the front of each bed, I’m not sure why there are two featured in each set, but you can switch them out to show bubbles, seaweed, features or footprints. Due to the different style of build for the Goldfish, they also include a stack of transparent 2×2 bricks to give the appearance of floating.

There have been so many characters and creatures transformed into BrickHeadz over the last few years, but the majority of them have followed a very similar build. Just like the Cat and Dog sets from earlier in the year, these two new Pets offer the most unique take on the BricksFanz format yet.

Kids who love animals will adore this BrickHeadz™ Goldfish (40442) build-and-display set. The goldfish and fry both sit on iconic BrickHeadz stands and look as if they’re ready to blow bubbles underwater. The stands fit into a sturdy, blue base that includes coral and plants and comes with 2 stickers – 1 with bubbles, 1 with corals – for decorating the base. This buildable pet set is a perfect gift for all kids, BrickHeadz collectors and pet lovers. 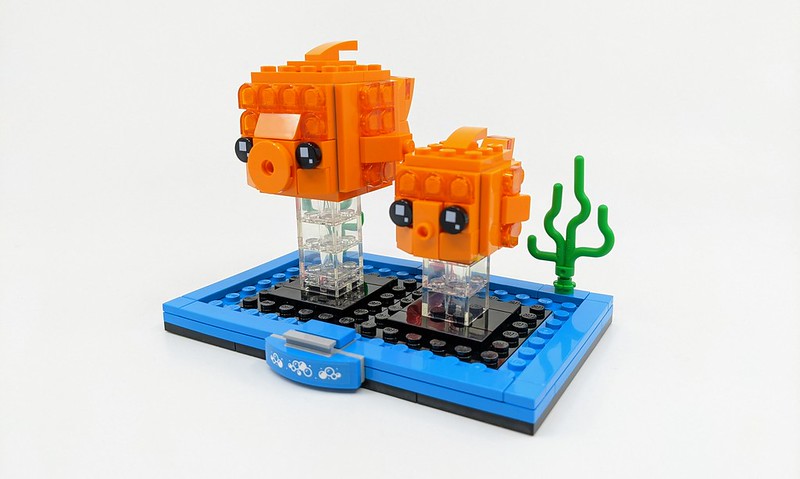 The Goldfish BrickHeadz offer the most unique take of the format yet. Fish are commonly known for these lack of legs and ability to swim. Two traits that don’t suit the traditional BrickHeadz build style. But that hasn’t stopped the overall style being used to craft a pair of fish. Both are much smaller than other BrickHeadz, due to the lack of legs, so basically are just the head. Instead, they are mounted on a stack of transparent bricks. Despite the smaller bodies, you can instantly tell they are BrickHeadz. The cubic nature of the build and those unique eyes partly help with this. I love how transparent orange 1×1 arch tiles are used over orange elements to represent the shiny scales of a fish. The stand also offers a little extra compared to other Pets sets, with some coral and plants added to enforce the underwater world of fish. 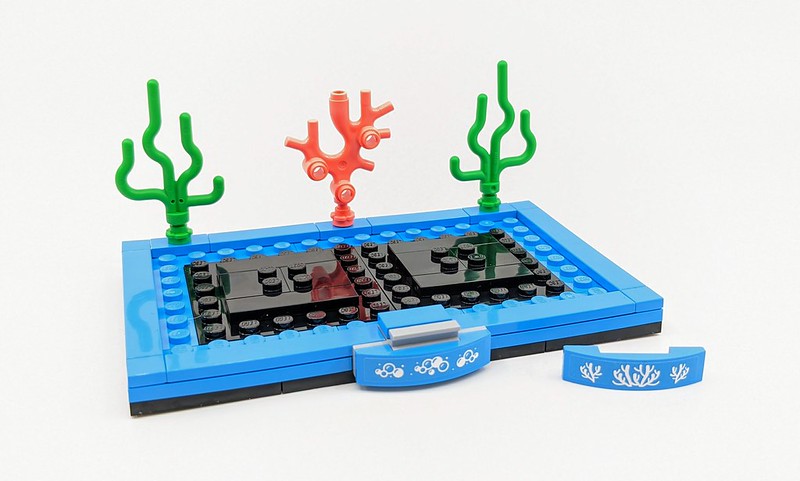 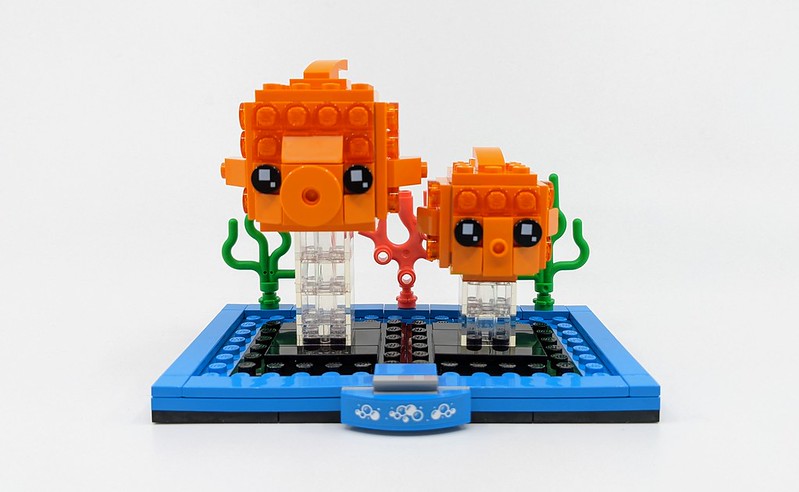 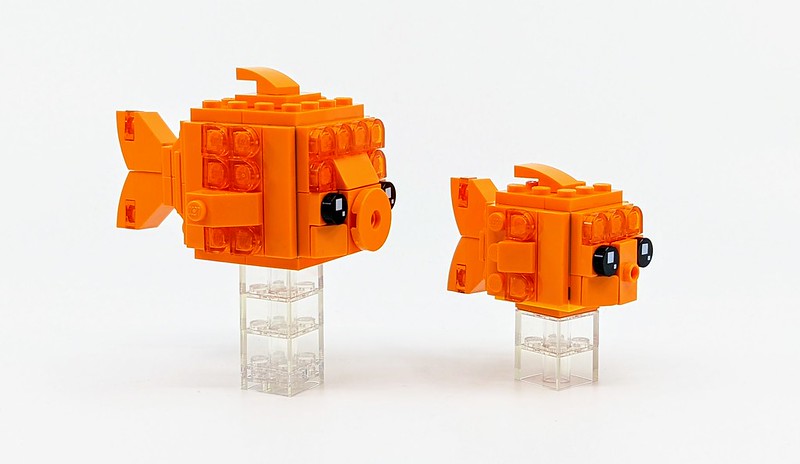 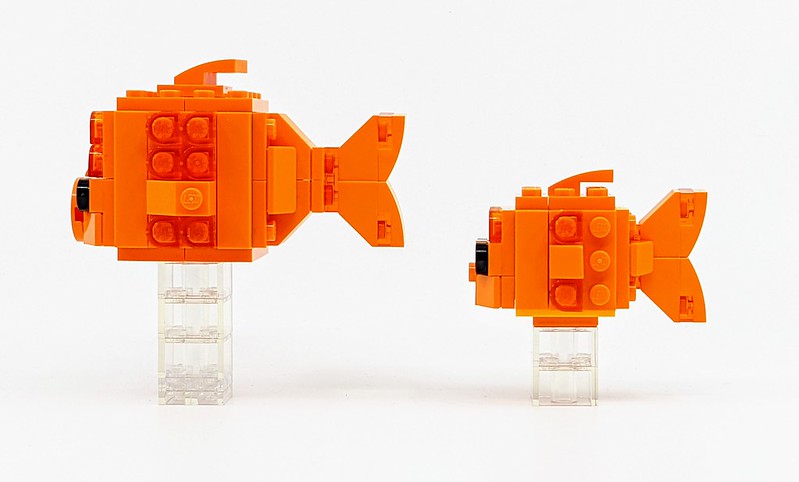 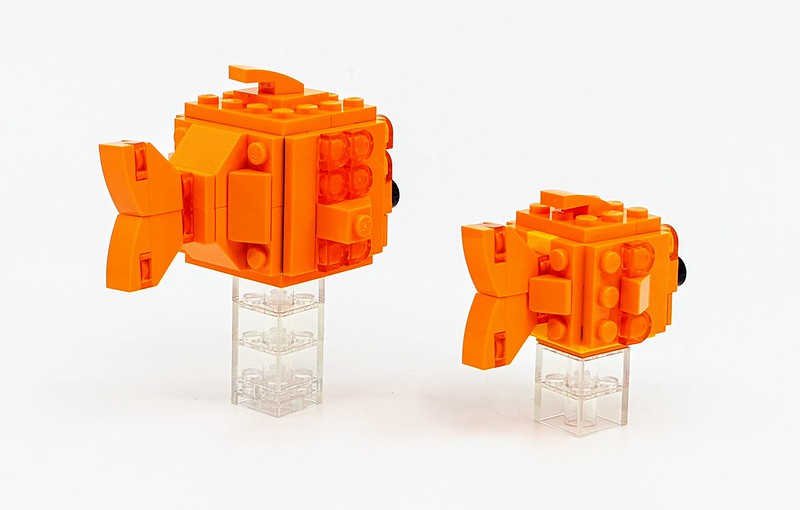 Bird fans will flock to this BrickHeadz™ Budgie (40443) build-and-display set. The budgie (also known as a parakeet) and chick both sit on iconic BrickHeadz stands designed to look like wooden bird perches. The stands fit into a sturdy brown base that resembles the bottom of a birdcage and comes with 2 stickers – 1 with feathers, 1 with footprints – for decorating the base. This buildable pet set is a perfect gift for all kids, BrickHeadz collectors and anyone who loves birds. 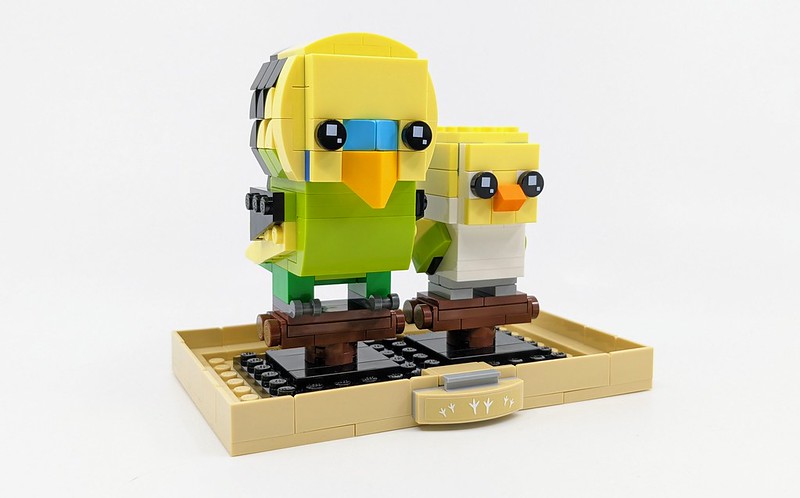 Although the birds are a little more similar to standard BrickHeadz characters and other mini versions, they still stray a little from the overall design. In particular, the adult Budgie has a much different body in order to accommodate the feathery tail and wings. Now the head of the adult bird is outstanding. The use of quarter plates in black and pale yellow, perfectly recreate the unique patterns found on real budgies. They are a little fiddly to get aligned correctly, but the result is amazing. The smaller bird isn’t as colourful but I do really like have the little wings have been created. 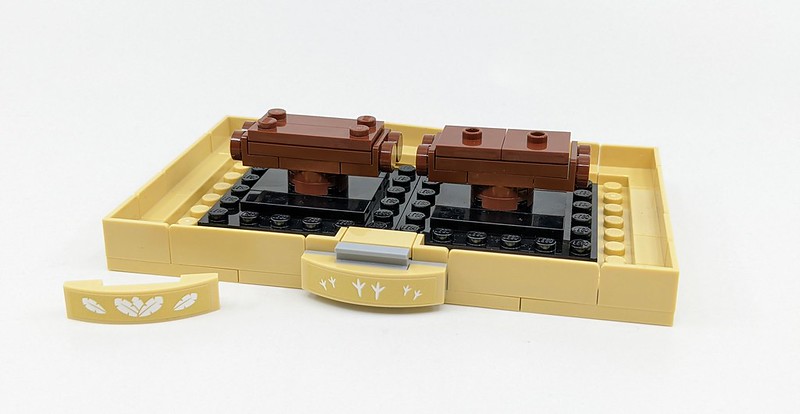 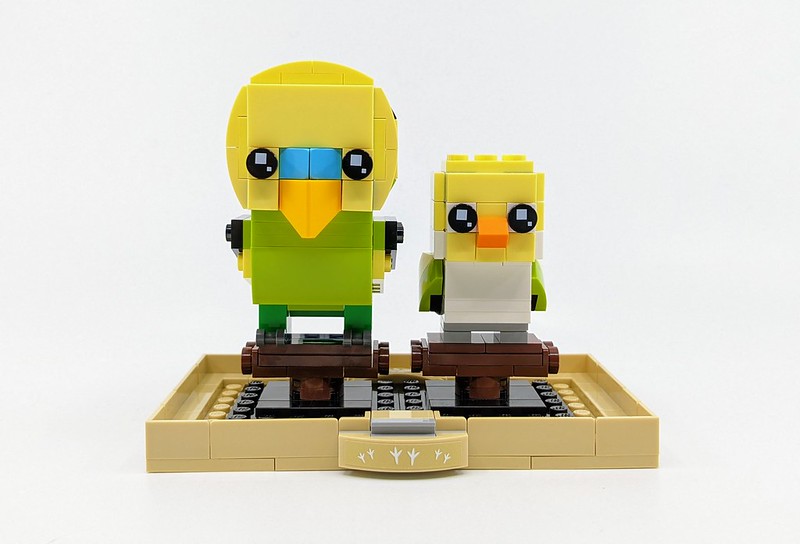 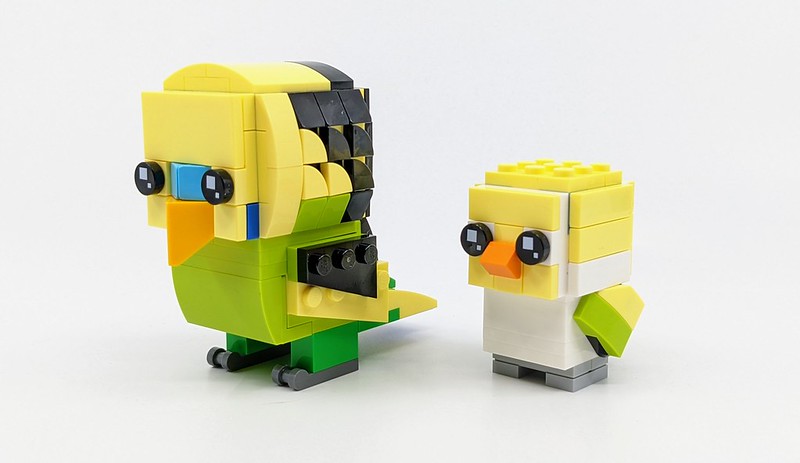 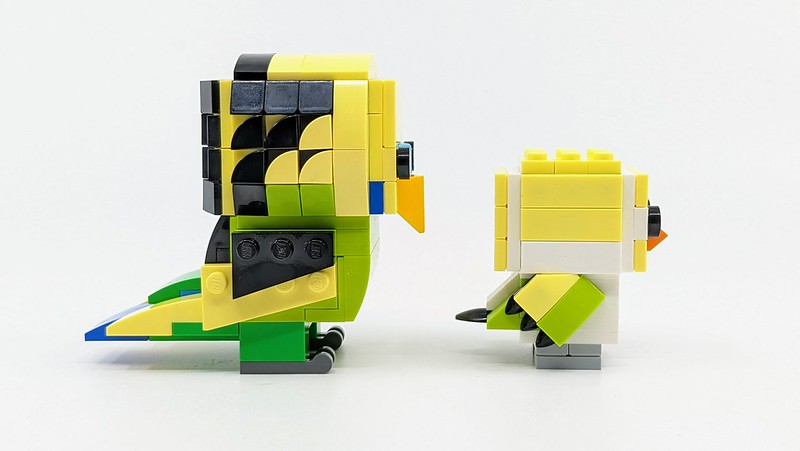 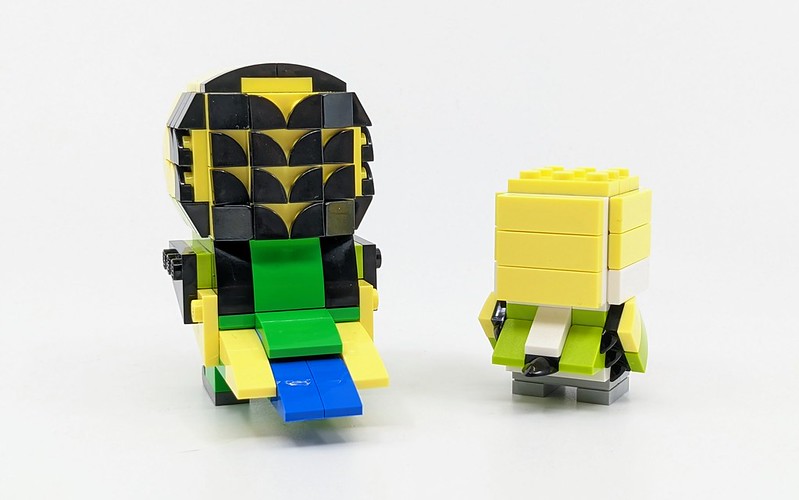