After making their debut as Comic-Con exclusive sets in 2017, LEGO® BrickHeadz have had a strange life ever since. Beginning with a number of iconic characters, over the years, the range has expanded to include original characters and various seasonal sets. This year BrickHeadz have branched out again with the new Pets sub-theme. The first two sets are themed around the most loved of pets – Cats and Dogs. So here’s a closer look at both sets, which each include a standard BrickHeadz character and smaller Buddiez, along with a unique display plate. 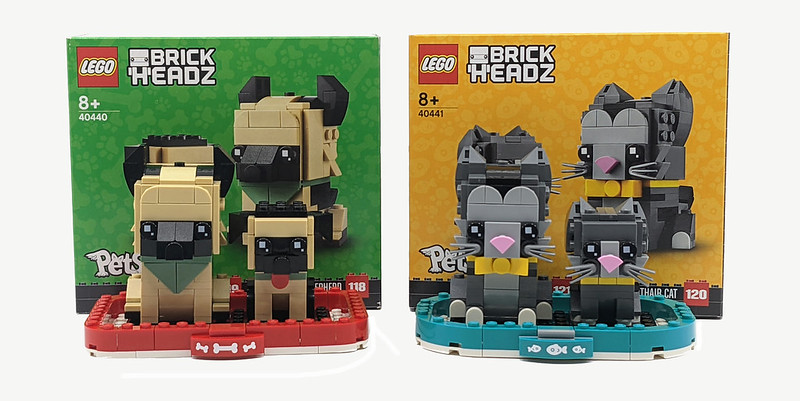 Both packs feature a standard sized BrickHeadz character and a smaller companion, which has previously been dubbed Buddiez by the LEGO BrickHeadz Design Team. The normal style of display plate is switched out for a bed-type build, in which both BrickHeadz can sit. They include different stickered bow plates to affix to the front of each bed, switching out paws or fish or bones. The display beds even have a lowered section at the rear to allow room for the tails. Despite the different style of display, the inside of the beds has the same sort of mount points as standard display plates.

Animals haven’t been the source of many other BrickHeadz sets, apart from Blue the Raptor and Hedwig, almost all sets are based on human-like characters even the seasonal animals. Although the Dog and Cat have a slightly different appearance to other BrickHeadz, they follow a very similar build style. That includes a ‘brain’ within the innards of the BrickHeadz and central core clad with an outer skin. The main difference is the way the legs are added and of course, things like tails and ears. 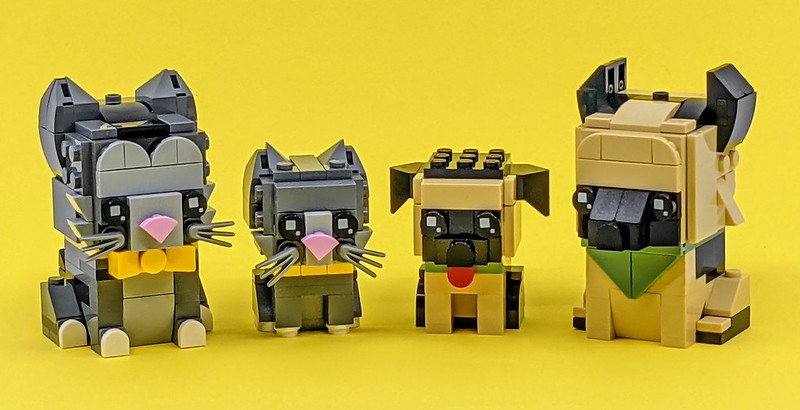 Kids who love pets will adore this BrickHeadz™ dog and puppy, build-and-display set. The German shepherd wears a bandanna and has a movable tail, and the puppy looks very cute with his little red tongue sticking out. The dogs sit together on a sturdy baseplate in a decorated basket, making this buildable pet set a great gift for all kids, BrickHeadz collectors and pet lovers. 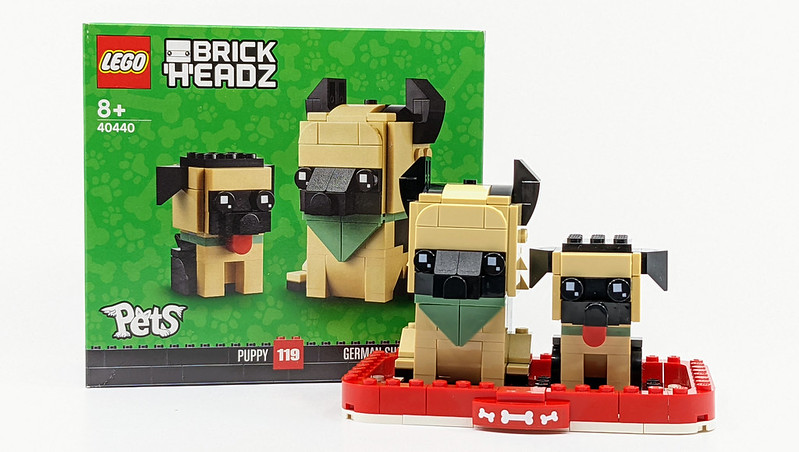 The German Shepherd breed has a unique appearance, which other results in a black muzzle and darker fur patches on the body. These markings have been captured well on both of the BrickHeadz versions, despite the small size of each. My only complaint is the choice of brick colour used for the lighter fur is too light, a darker brown would have looked a little better. All the Alsatians I’ve ever known have always been browner. I like the little scarf the larger dog is wearing, as it adds a little character. I wouldn’t say they scream as to what breed they are meant to be, which is a good thing has it could be used as a base to tweak the design to a different breed. 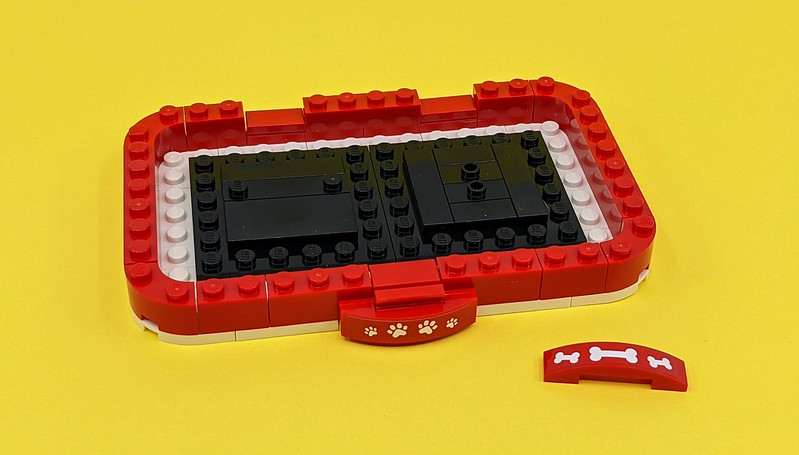 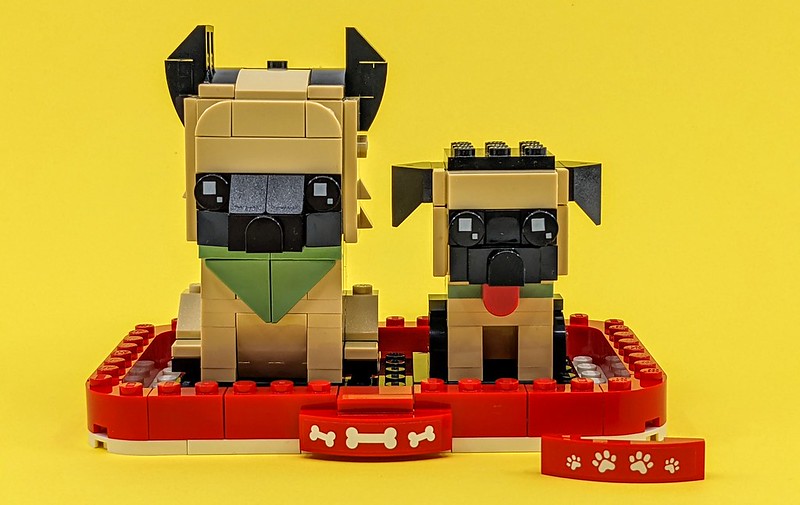 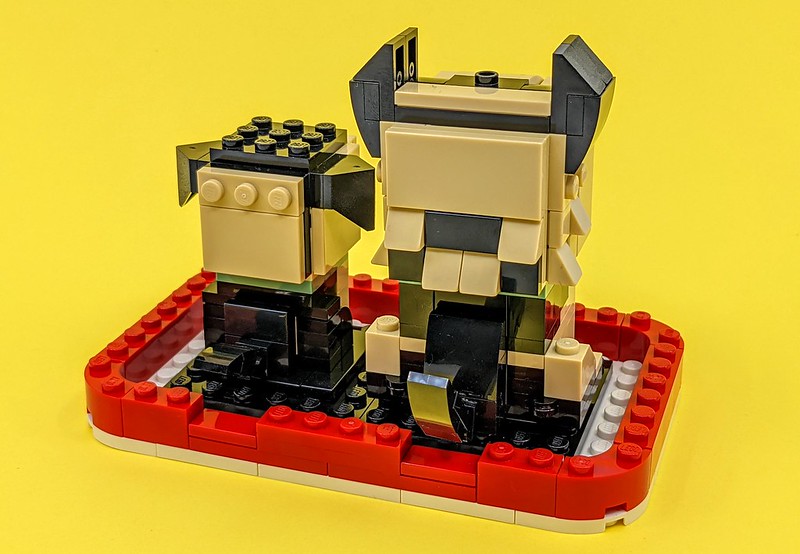 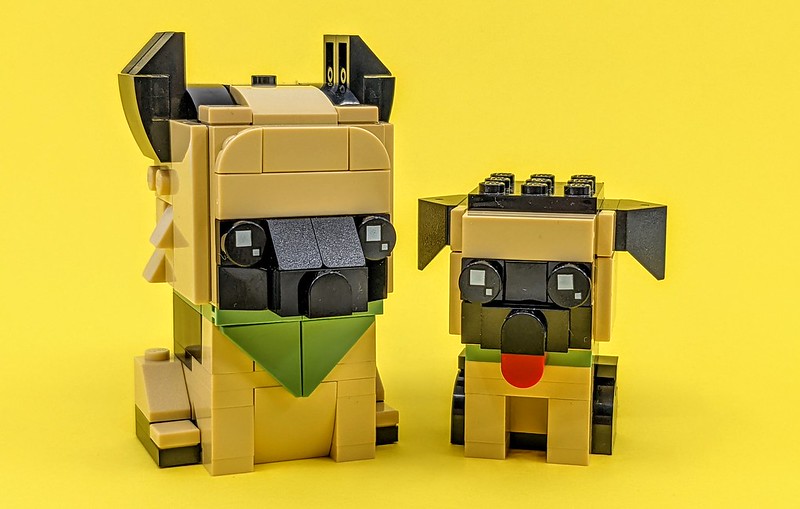 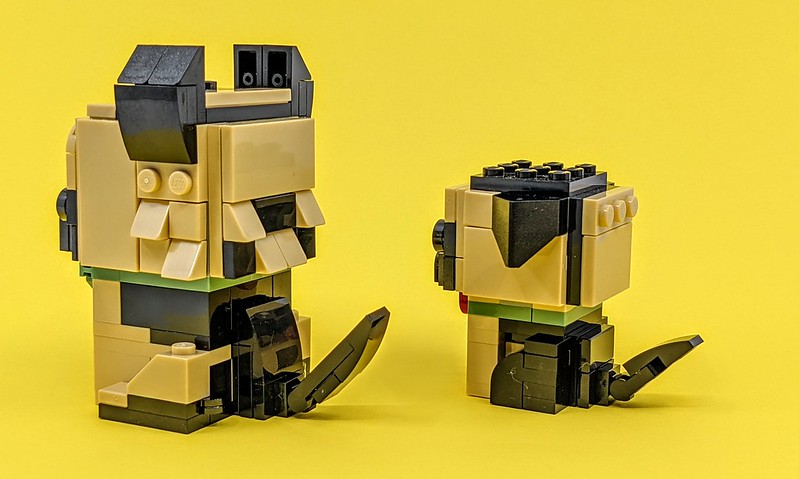 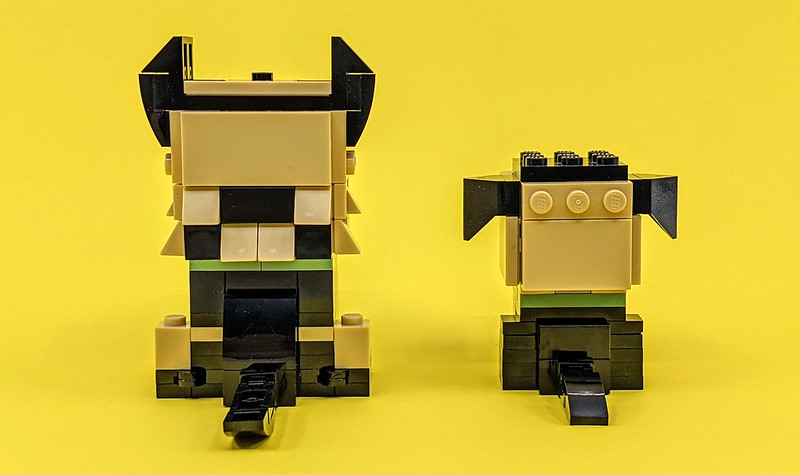 This BrickHeadz™ cat and kitten, build-and-display set will have cat fans purring with delight. The adult shorthair cat wears a bow tie, has a movable tail and sits next to a cute kitten on a sturdy baseplate in a decorated basket. This buildable pet set is a great gift for all kids, BrickHeadz collectors and anyone who loves cats. 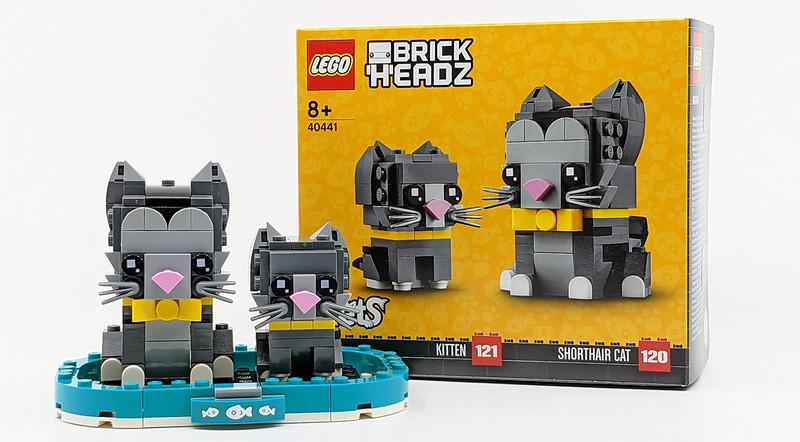 Unlike the dogs, the cat version is a little more generic. Although Shorthair is a breed of cat, they can vary vastly in their appearance. However, British Blue is a common colour, which I assume is the inspiration for these BrickHeadz versions. The darker grey is broken up thanks to the use of a slightly lighter grey around the face and chest area. I love how well the Wolverine claws work for the whiskers on both cats. 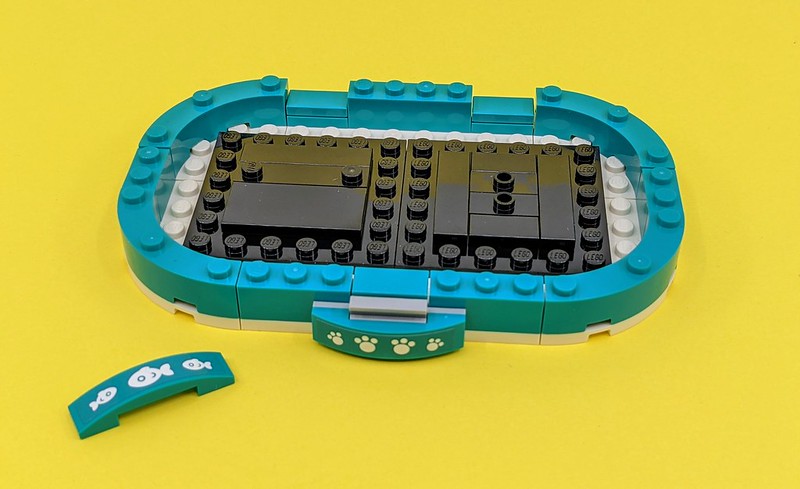 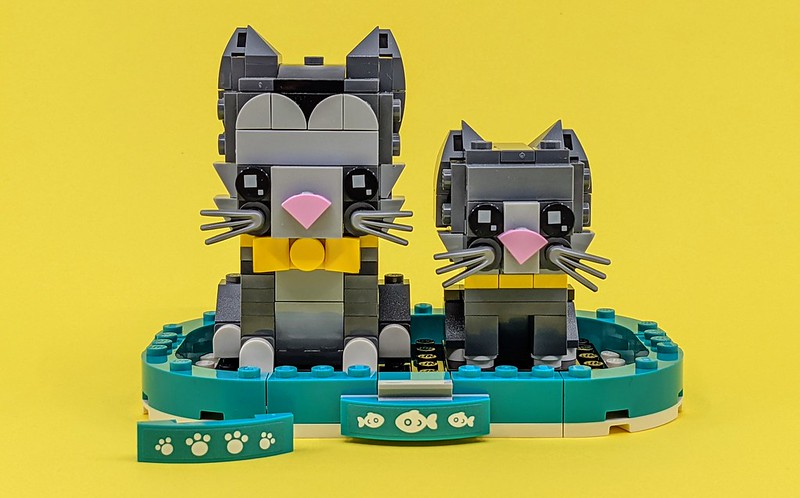 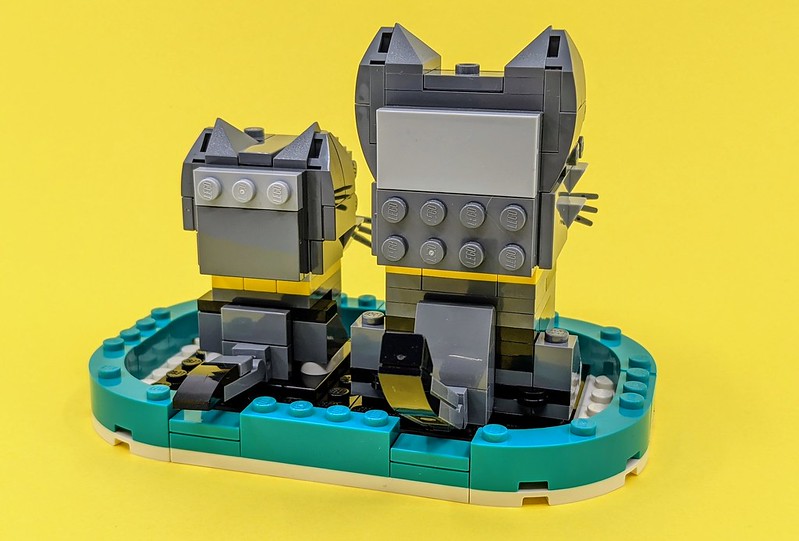 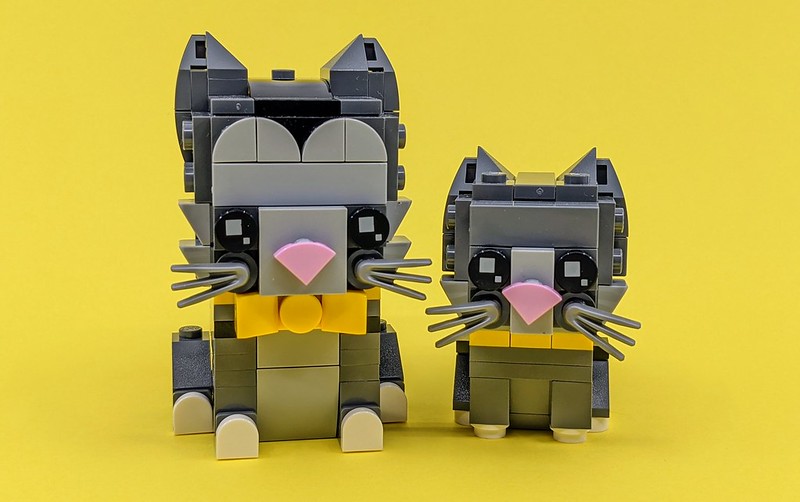 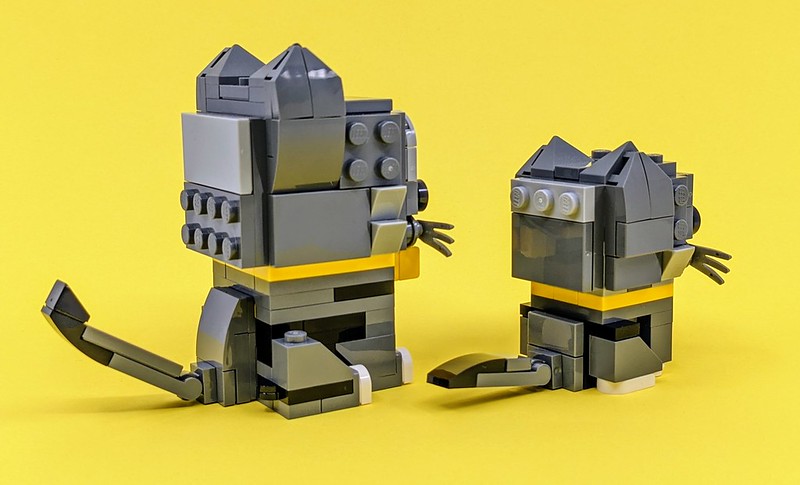 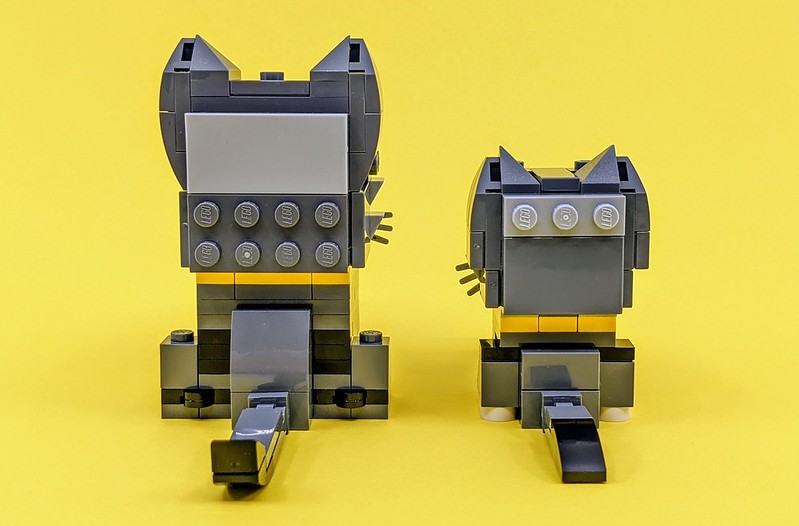