In just over a weeks time, the latest attraction at LEGOLAND® Windsor Resort opens its doors. Before the spooky happenings get into full swing, members of dance troupe Diversity have been jigging about about the ride for some reason. The ride will be similar to the Hex: Legend of the Towers ride at Alton Towers. So riders will take a stroll through a haunted graveyard before taking their seats at the table for a Monster Party. The ride gives the impression of the room spinning and other spooky happenings. It will also offer unique smells to really at the atmosphere. The Haunted House Monster Party ride opens its doors on April 13th at midday and you can learn more about it below.

The brand-new Haunted House Monster Party ride at the LEGOLAND® Windsor Resort has been given its official topsy-turvy “seal of approval” by Diversity stars Jordan Banjo and Perri Kiely ahead of its grand opening on 13 April.

The dancing duo – who are no strangers to spending time flipped upside down as part of their impressive dance careers – were invited down to the Resort to get a sneak peek of the fang-tastic new ride, which will surprise ride-goers with a special magic trick to make them feel like they’ve been spun upside down!

Whilst at LEGOLAND, the boys showed off their gravity-defying skills and hair-raising moves around the Resort as it prepares for the ride’s grand opening. They were spotted performing flips outside the front of the Haunted House, laughing and joking with Lord Vampyre and checking out the ride for the first time.

Commenting on the ride, Jordan Banjo (26) said: “The Haunted House Monster Party ride looks wicked! It’s packed with loads of amazing LEGO gargoyles and bats to make the whole place feel really spooky. It’s exactly the kind of ride I’d like to take my son Cass on, when he’s old enough of course – but he’ll have to beat me to it!”

Perri Kiely (23) added: “We had the best day at LEGOLAND and felt pretty lucky to be the first to see the amazing new ride! It goes without saying that we’ll be back as soon as we can, and who knows, maybe we can add it into our training regime ahead of our 10 Year Anniversary Tour!”

The Haunted House Monster Party will open its doors to guests on Saturday 13 April at the LEGOLAND Windsor Resort. Young party guests will be greeted by joke-telling LEGO brick gargoyles and talking statues, LEGO bunting, banners and balloons. Inside Lord Vampyre’s Haunted House, families will take their seats on the ride at a banquet table in a magnificent hall, brimming with ghastly monster party food, cauldrons, potion bottles and goblets. Once sitting comfortably, Lord Vampyre will reveal his magical party trick – bringing the banquet hall swinging to life and turning the room upside down before his party goer’s very eyes.

Lauren Walton from the LEGOLAND Windsor Resort commented: “It was great to have Jordan and Perri come down to the Resort to check out the new ride and give it their topsy-turvy seal of approval! We can’t wait to welcome lots of little monsters through the doors to experience The Haunted House Monster Party for themselves from the 13 April*.”

Guests can find out more and book tickets online at www.legoland.co.uk 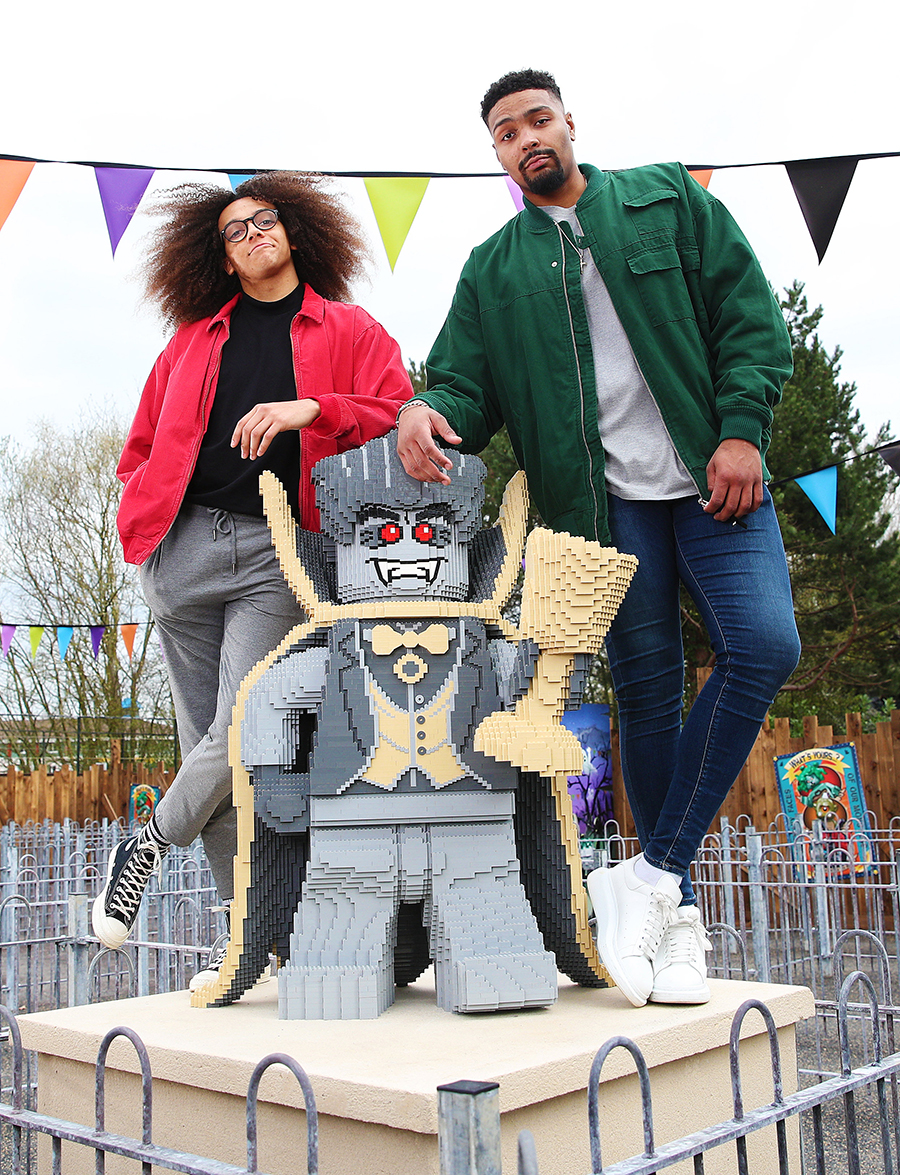