Construct A LEGO King In Leicester This Easter

Home » Events » Construct A LEGO King In Leicester This Easter

This Easter it’s time to help construct a King at the King Richard III Visitor Centre in Leicester. Between March 30th until April 2nd visitors to the centre will be able to help Fairy Bricks construct a huge LEGO® mosaic of the King Richard III, the last English king to die in battle. If you’ve been to any major LEGO event in the UK, you’ll have probably experienced the marvel of a Fairy Bricks Mosaic. Now one of the most famous portraits of the king will be recreated using LEGO bricks. King Richard III has a special connection to Leicester, which the remain of the king famously found beneath a car park in the city. After test confirmed those remains where in fact of the king, they were laid to rest in Leicester Cathedral, close to the King Richard III Visitor Centre. 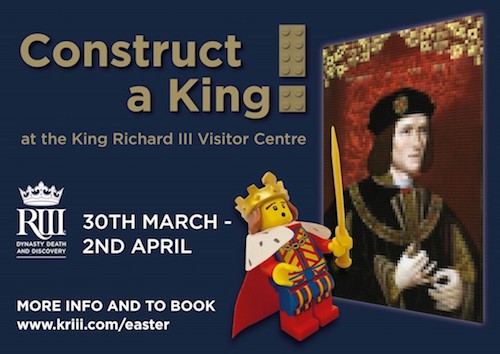 It’s all about portraits this Easter at the Visitor Centre…

Over the Easter weekend (Friday 30th March – Monday 2nd April), visitors young and old can help build a huge LEGO™ portrait of King Richard III – recreating the most famous portrait of the last English king to die in battle.

Throughout the Easter holidays (24th March – 8th April), explore your creative side with our portraits craft activity – make your own collage or colour in your own portrait of King Richard III to take away with you! There’s also the chance to dress up and put yourself in the picture with our selfie frames.

And if that wasn’t enough to keep the family busy for a couple of hours, there’s our award-winning exhibition to explore – find out almost everything there is to know about King Richard III – his life, death and the discovery and identification of his remains. No visit is complete without seeing the actual place where the king’s remains lay undiscovered in a car park for over 500 years.

Our Easter activities are included in the price of admission to the Visitor Centre and don’t forget – once purchased, you can use your tickets to visit us again and again for a whole year. Book tickets