A Look At LEGO…. Elves

When LEGO® Friends was introduced in 2012, it split the LEGO community. Some loved its use of new and unique colours, whilst others lambasted the inclusion of mini-dolls in place of minifigures and its focus toward the female market. This ‘genderizing’ of toys is nothing new but the mainstream media soon jumped at the chance to criticize The LEGO Group for its new ‘girly LEGO’. But despite all the controversy, LEGO Friends was an instant success, something not even LEGO was prepared for. Soon after their release, LEGO Friends sets were almost impossible to find in stores. In 2014, LEGO Friends even outperformed the ever popular LEGO City line. Despite all the controversy, LEGO Friends clearly has an eager fanbase and it’s doing well for LEGO, so it’s no surprise the same formula has been used in other similar companion themes.

In 2014 a range of ‘Friendsque’ sets were released based on the popular range of Disney Princess characters and the following year saw the launch of a magical new theme called LEGO Elves, both of which use the mini-dolls in place of minifigures just like LEGO Friends. LEGO Elves was first revealed midway through 2014, thanks to a retailer database list. Apart from the name, no-one had any clue what LEGO Elves would entail. Many assumed it was a non-licensed replacement for Lord of the Rings/Hobbit theme whilst others suggested it was new mystical Castle theme. It was later revealed that LEGO Elves would be another spin off from the Friends line, featuring a gang of magical mini-dolls, a rich backstory and a series of colourful playsets. 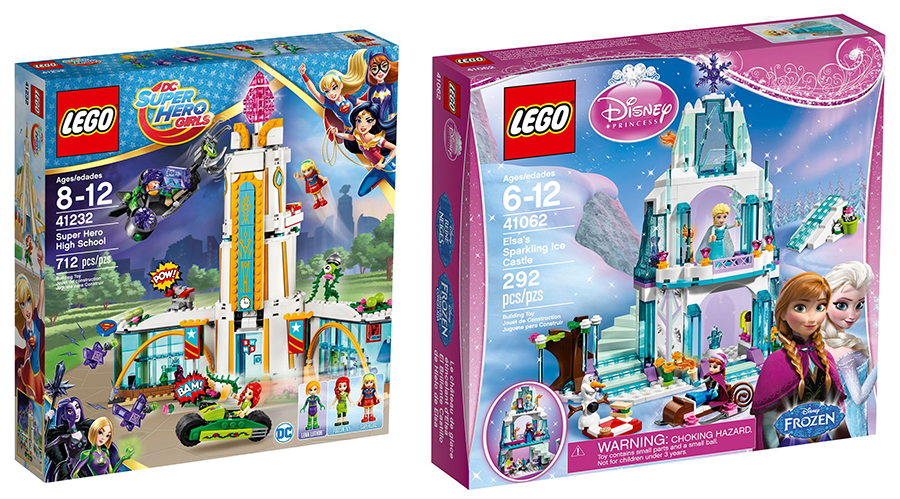 LEGO Elves follows the story of Emily, a smart, quirky and creative girl, who is mourning the loss of her grandmother. One day she discovers a strange portal thats leads to the magical land of Elvendale. There she meets a group of elemental Elves, Naida the Water Elf, Farran the Earth elf, Azari the fire elf and Aira the Wind elf. They must work together as a team in other to find the Elemental Keys which will unlock a portal for Emily to return home. With each new wave of sets, the Elves story advanced, introducing new characters and areas of Elvendale, for Emily and the Elves to explore.

The LEGO Group have a very different way of marketing their products, if they are licensed sets, they normally partner with the license owner to get the word out. But for their own properties they create a microsite of content, videos and companion apps. The LEGO Elves was site is jam packed with content, from character videos, mini movies, and even a music video. There’s also a mobile app for iOS and Android, which extends the story of further with a range of fun minigames and a LEGO Elves magazine, with covermounted Elves themed minisets, is part of the LEGO Special range. In 2017, LEGO joined forces with streaming giant Netflix for an original animated series based on the world of LEGO Elves. Unlike most other LEGO cartoons, the animation style is more akin to Japanese animations. In fact it’s been created by South Korean animators Studio Mir, who have previously worked on The Legend of Korra and the Voltron reboot.

The sets themselves are filled with character, thanks the array of brightly coloured elements and the highly detailed mini-dolls. They also employ some great build techniques which help give the sets even more depth and visual uniqueness. They are also the source of a number of great new parts including the 6 stem flower element and a number of new animals. But the highlights of the Elves sets are the heavy use of transparent elements. They help the sets to stand out from all other LEGO themes. As new sets have be released more unique elements have been introduced, including Goblins, Dragons and many new recoloured elements.

The first year of LEGO Elves sets introduced us to the main characters and followed the story of Emily, a human who had stumbled upon the realm of Elvendale and the elemental Elves who inhabit it. In order for Emily to return home, she needed to find four special keys which would unlock the portal home. Later sets continued the story introduced new characters including Skyra, the protector of the Sky Castle and the magical portal. 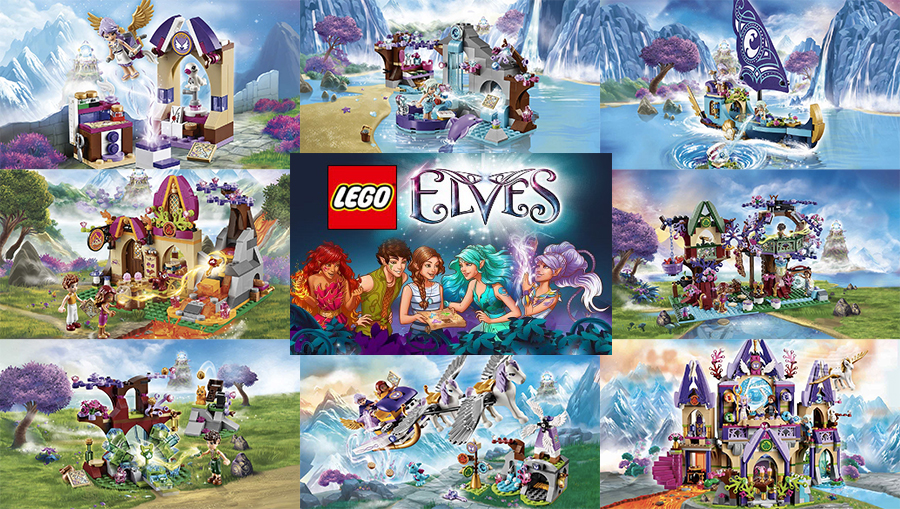 In 2016, the elemental dragons were hatched along with a dark new evil. Ragana, the elf witch wished to enslave the dragons and bring darkness to the Elevendale. These new sets included a number of new elements including baby dragons and many of the parts used to create the adult dragons.

As the themed moved into 2017, the story continued and introduced another bad guy, in the form of the Goblin King, a power hungry fallen elf, who wished to rule over not only Elevendale but the human world as well. Using a special amulet, he controls a army of weak minded goblins and wants to take control of Emily’s amulet and will stop at nothing to get it, including capturing Emily’s younger sister.

With the dragons safe and the goblins banished, a dark new force rises this year. Noctura rules over the shadow realm and wishes to bring the darkness to Elvendale. She captures the elemental creatures, with the help of her mischievous bat creatures, to use their power for evil. As with previous sets, this years releases includes unique elements used to create the elemental creatures and the collectable little bat creatures.

Even the LEGO Elves packaging is ace, Friends is criticized for its use of ‘girly’ pink, although the packaging is actually lilac and purple. For LEGO Elves, it’s the complete opposite, the main colour scheme is a mixtures of blues and purples, themed around the forest setting of the Elves storyline. The five main characters adorn the front of the boxes, adding even more colour to it and making the packaging very eye-catching. LEGO Elves is aimed at ages 7-12 year olds, and despite the female heavy cast of characters, it has a broader appeal than LEGO Friends. Don’t let the sets location in the girls toy department put you off, they offer fun builds, great parts and a rich play experience for boys and girls alike. Just take a moment to appreciate how these non-licensed sets are filled with imagination and creativity compared to many of their licensed counterparts.

The brand new range of LEGO Elves sets will be available from shop.LEGO.com, LEGO Brand Retail Stores and Argos in the UK, from March 1st.