This Summer Woody, Buzz and all the toys are back in town, for the fourth Toy Story outing. To coincide with the films release, LEGO® have brought the Toy Story theme back, but this time around the sets are part of the new 4+ line, which is a rebranded version of the Juniors range. These are aimed towards younger builders and feature easy start elements to make building a little easier. But the age is just a suggestion, they have to put that on the boxes and a number of AFOLs are eagerly awaiting these fun new sets. I’ve managed to grab a couple of them and the first I’ll be taking a look at features Woody and an couple of old friends from the very first Toy Story movie, RC the remote controlled car and a platoon of Bucket O Soldiers. Introduce your child to the wonderful world of Toy Story and the excitement of LEGO building with this Woody and RC duo set! Specially designed to be fun and easy for preschoolers and youngsters, this set featuring an easy to build Toy Story RC character car with a special Starter Brick chassis that lets even first-time builders have the pride of constructing vehicles and more, all on their own! The included simple building instructions will also help your young race car driver understand the purpose of the building steps, and grow their confidence and imagination for a great start to LEGO brick building in a familiar Disney Pixar setting.

The main part of the build is RC the radio-controlled car. RC first appeared in the first Toy Story movie and has previously appeared in the 2010 set 7590: Woody and Buzz to the Rescue. The version here is a little smaller than the original set, but it still looks just as good. As a 4+ set the build begins on a special new base element, but apart from that, the rest of the build is like most other LEGO sets. with no other easy start elements used. There is a gap bigger enough to have Woody sitting in the driver’s seat and he also has a remote controller complete with a mini steering wheel. 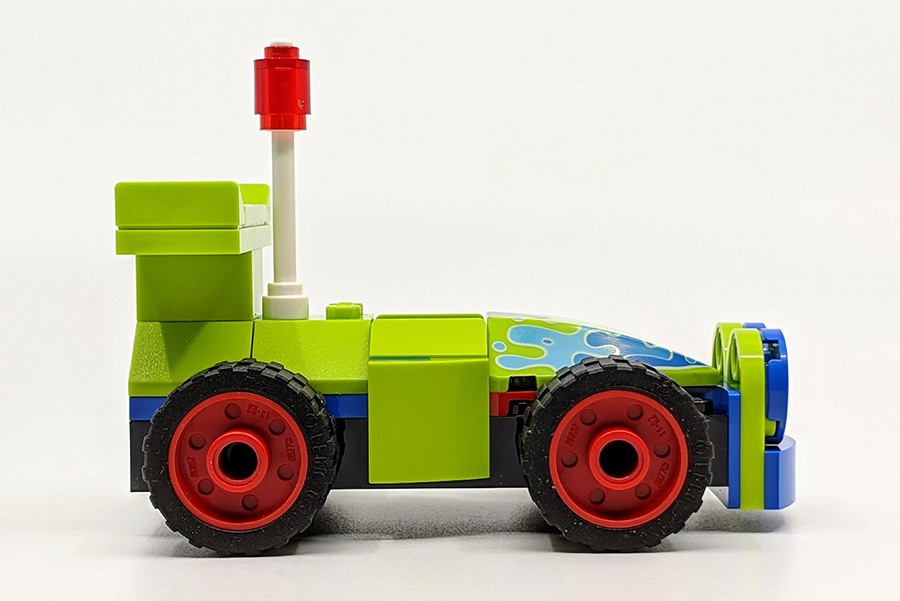 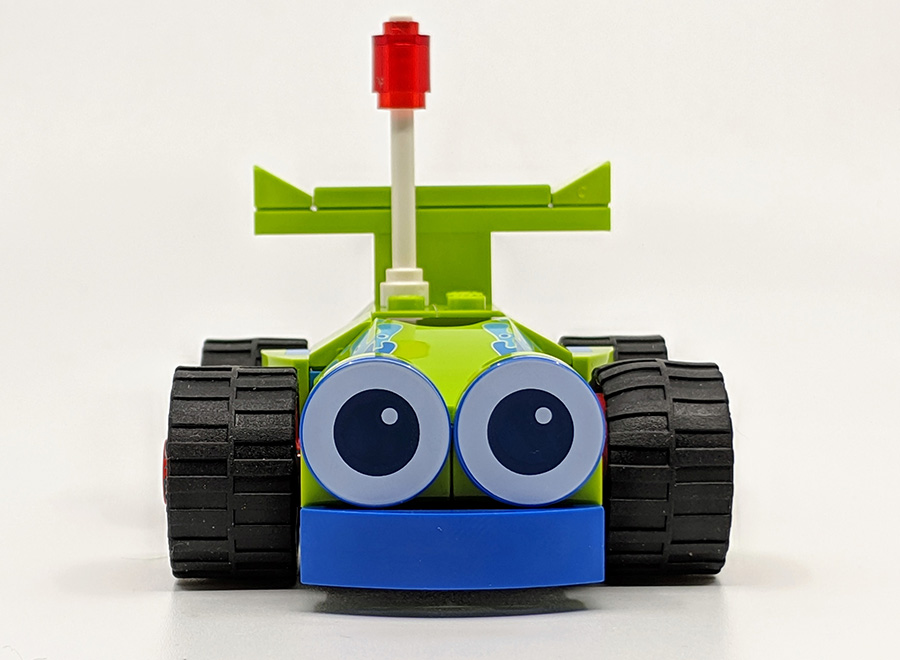 Another good thing about the 4+ sets are the lack of stickers. Detail on the sets is achieved by the magic of printed elements. There are four included with the set and all of which are used in the building of RC. These include the spoiler, bonnet and RC’s eye headlights. There are also a few buildable accessories included with RC. There are a trio of traffic cones and six boxes boxes, each with different coloured tops. These are very simple builds but bring a little colour to the build. Plus they make a nice place to display the Toy Soldiers. The set includes an all-new version of Woody, now in standard Minifigure form. Woody has a new hair and hat combo element, along with a great recreation of his cowboy outfit. The print detail is really impressive and nice a sharp. His boots are achieved with the newish dual-molded legs and Woody has two different expressions – a smile and a grin. Although not actual Minifigures, Woody is joined by a group of Toy Soldiers, which are recoloured trophy elements or microfigs. 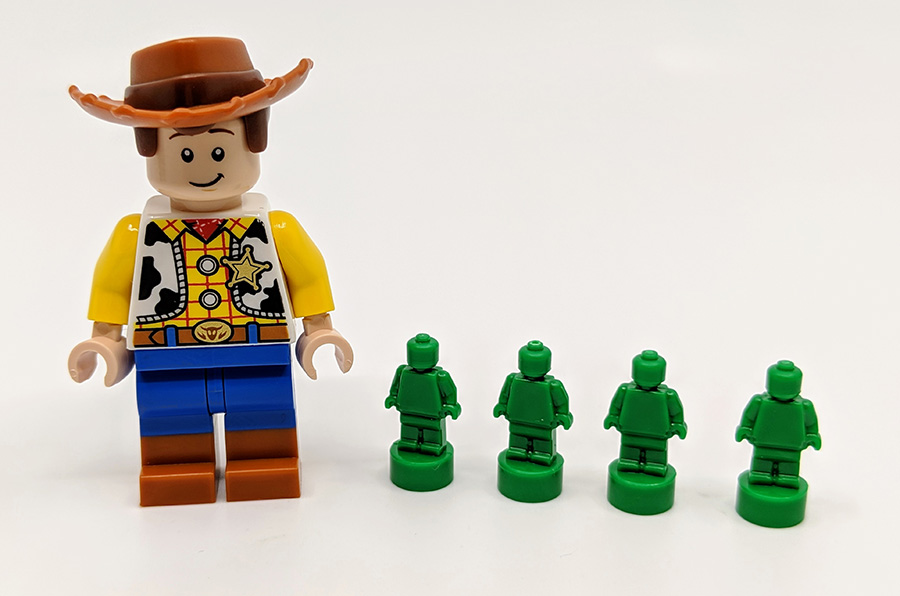 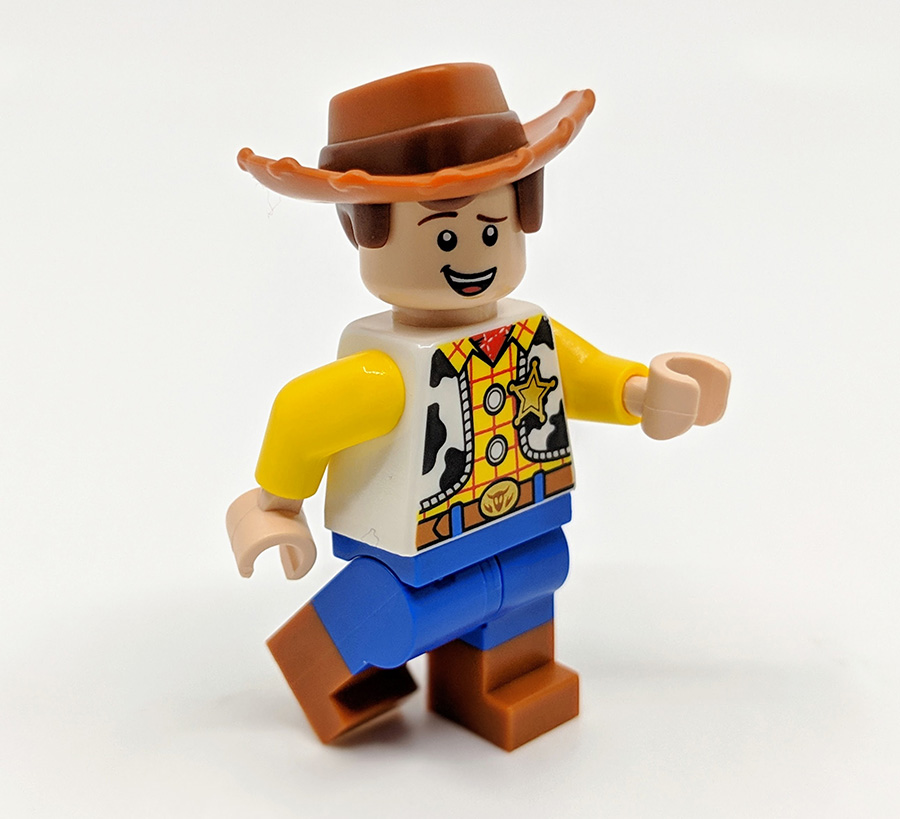 I really like that Woody is a standard Minifigure now instead of the strange version included in past Toy Story sets. You can instantly tell that it’s Woody but it’s still a Minifigure. Sometimes the unique art style of characters can make it tricky to translate some characters into Minifigure form, but this works really well. 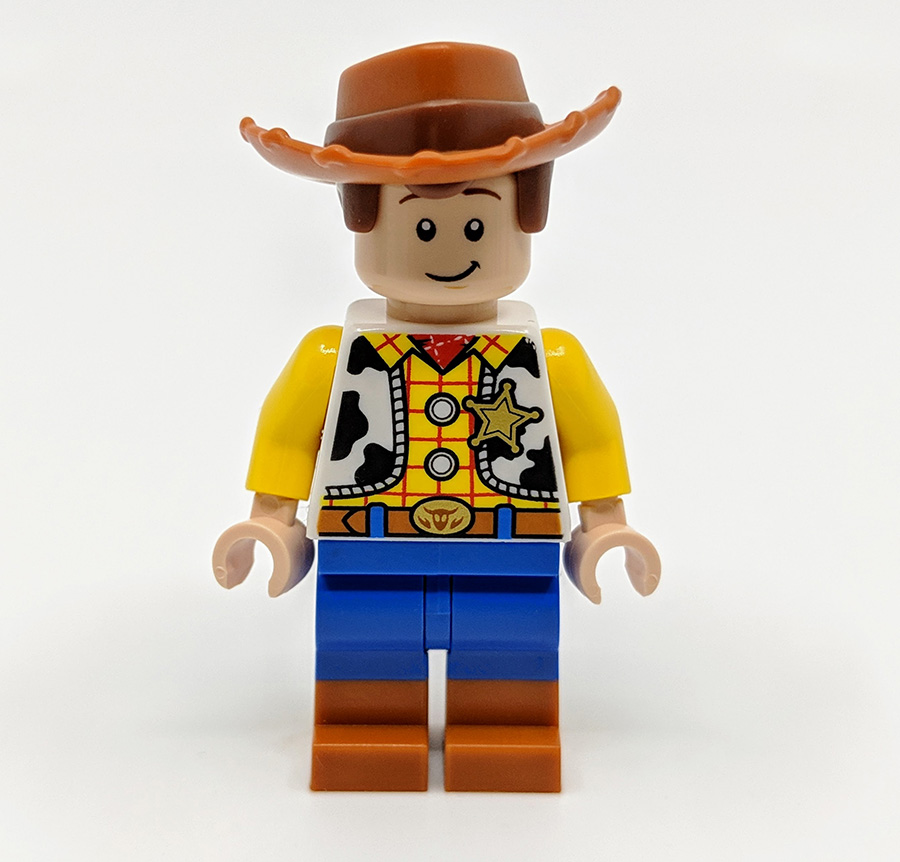 This isn’t the first time we have had LEGO sets based on the world of Toy Story, back in 2010 a number of sets based on the second and third Toy Story movies were released. The minifigures in those sets looked a little different. With Woody having a molded head and odd looking longer arms and legs. I have to say the newer version of Woody in 100 times better than his original look. I like when the essence of a character is captured in standard Minifigure form. Print detail on Woody’s torso is definitely better and the dual-molded legs look good too. 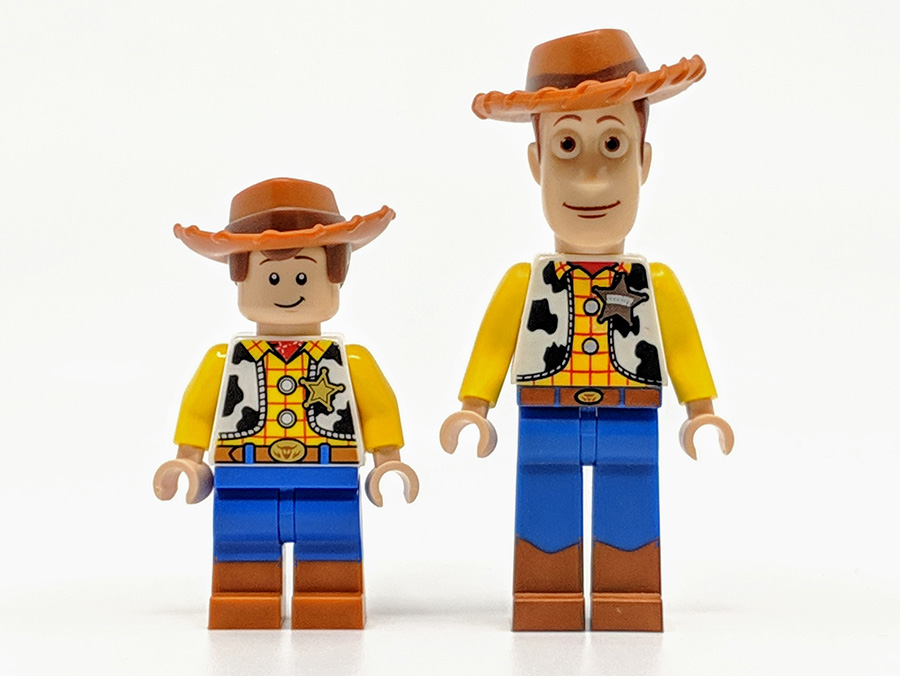 I’m a fan of the Toy Story films and was excited to see LEGO sets based on Pixar’s most famous world, make a return for the latest movie. After building the Incredibles 2 sets last year, I was also glad to see the Toy Story sets would be 4+ sets as well. Mainly because they have printed pieces and a decent price point. If they box didn’t say this was a 4+ it would be difficult to tell it apart from a standard LEGO set. In fact, with the small pieces like the Toy Soldiers, I’m more surprised that it’s actually a 4+ set. But do not be put off by the targeted age group, it’s a fun little build, with an awesome Minifigure as well as RC being a great recreation of the movie version. I also like the use of trophy/microfigs for the soldiers. All in all for a set that cost under a tenner, it’s pretty impressive. The LEGO Toy Story 4 sets will be available from April 22nd. This set was purchased from a UK retailer, details of which are available upon request.