When this set was first revealed many assumed it was going to be a freebie set, given away with certain spend amounts. But it’s actually a set you can buy and it joins the Easter Sheep BrickHeadz, as this years seasonal Easter sets. There have been numerous Easter sets released over the years, but none really which can be compared to this set, well not retail sets at least. But is it worth spending money on and is it a decent equivalent to a chocolate egg? Let’s take a closer look at the Easter Bunny House and find out. 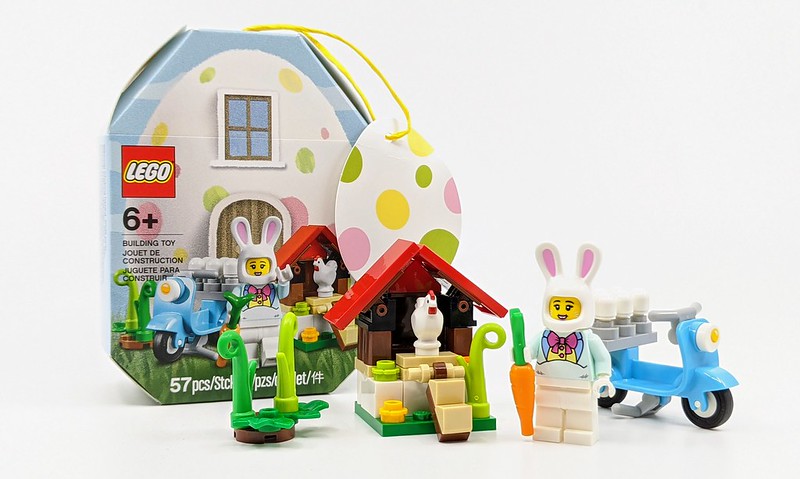 Celebrate Easter with this fun LEGO® Iconic Easter Bunny House (853990) construction kit for ages 6 and up. The egg-shaped house packaging doubles up as a festive decoration, and it comes with a to/from card, making it an ideal festive gift. Great for display and creative play, the set includes a buildable chicken house, featuring a removable tray to collect the chicken’s egg elements, scooter for the cute Easter Bunny minifigure to ride, plus a brick-built carrot and plants. Enjoy! 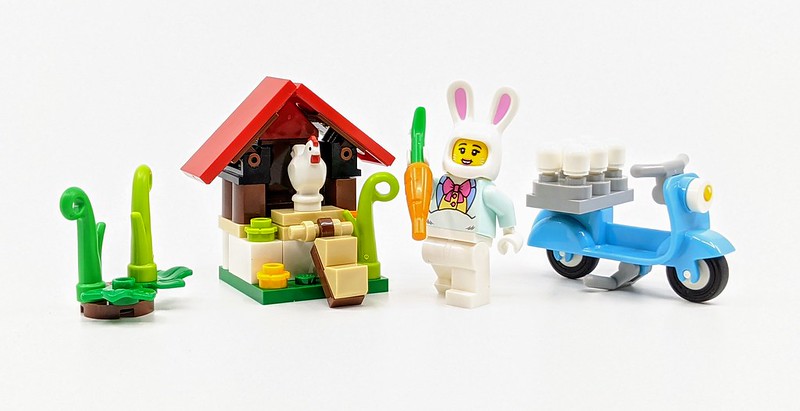 The set features a minibuild, a scooter and an exclusive new Easter Bunny Minifigure all packed in a unique, almost egg shaped box. The minibuild is a fun little chicken coop, this is a colourful little hut-like build, which has room for a lone chicken and acts as the source of the Easter Bunny’s eggs supply. Around the back of the hut is a classic car door element, which is hiding an egg. It’s a simple little build but looks rather colourful. There is also a simple plot of sprouting spring plants. 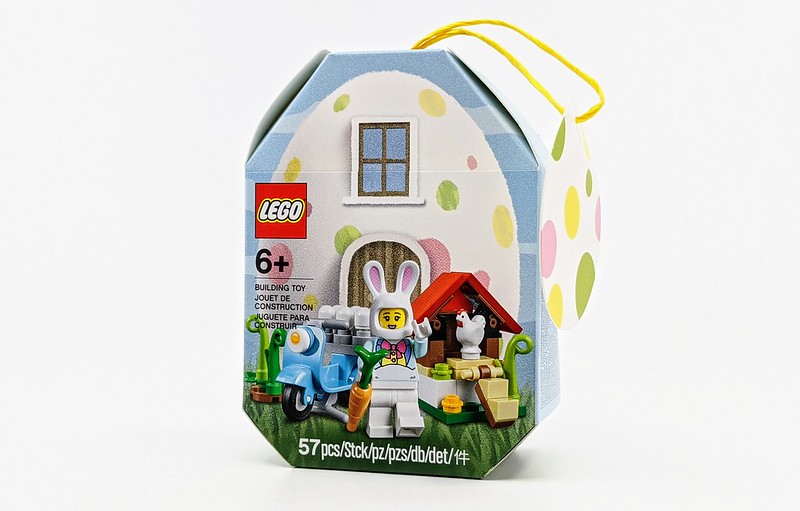 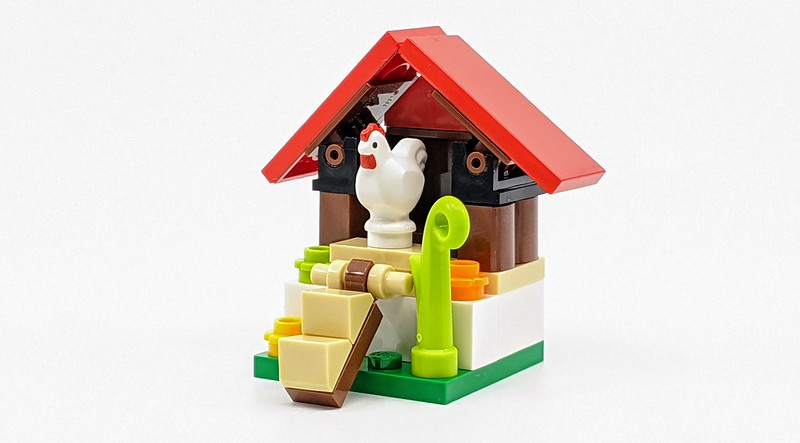 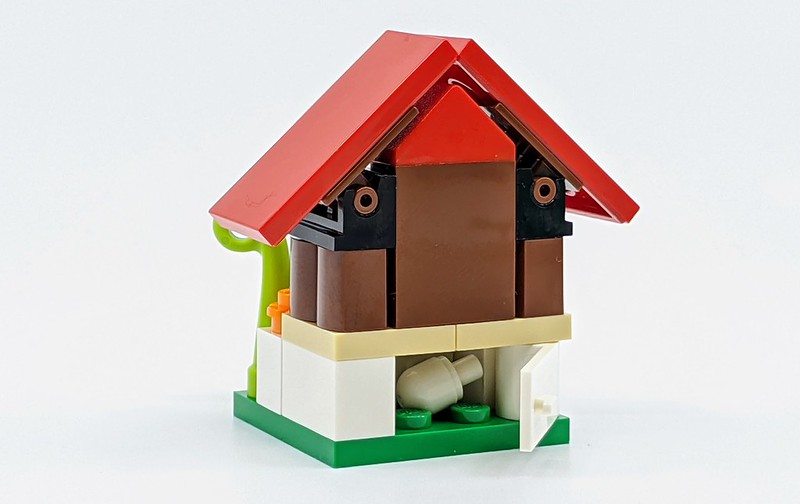 In the modern age of egg delivery, the Easter Bunny has upgraded to a funky scooter. This is the new Vespa-style scooter, which has only appeared in a couple of sets so far. A pair of handlebars are used to create the scooters steering handle and kickstand, but it’s jazzed up with a 1×1 round tile, which looks like a fried egg. There is also a tray of eggs perched on the back of the scooter. It matches nicely with the new Easter Bunny Minifigure. 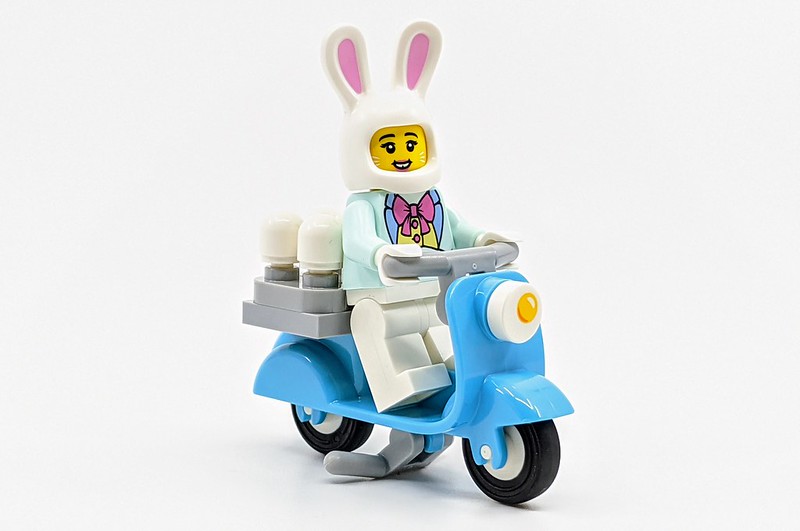 The very first Bunny Minifigure was released back in 2012 and there have been a few variants since then. In 2018 the first Easter Bunny was released in a small promotional and the Minifigure included here is very similar. So it uses the bunny ears headpiece, but has a uniquely printed torso, with a pastel coloured blazer and a fluffy tail on the back and plain white legs. The face shows this is a female Easter Bunny, and you can just about make out a set of whiskers. 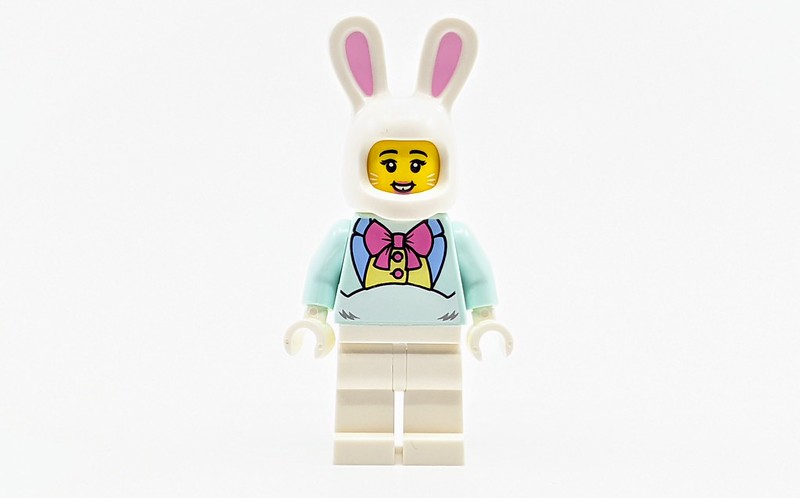 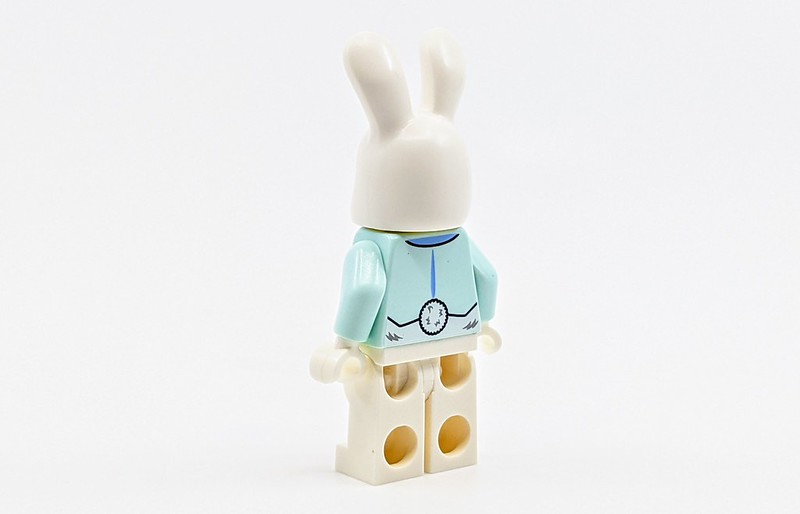 It’s a fun little set, but it really does feel like it should have been a free gift. The packaging is really similar to past GWP sets and even the content is minimal enough to be a free set. But saying that I would pay £6.99 for it, instead of having to shell out X amount to get it for free. The actual content of the set and how it’s packaged, does make it a perfect gift for Easter. I really like the little chicken coop and the scooter is a nice addition, plus it’s not found in any other cheap sets. I also like that the Minifigure is different to previous Easter Bunnies. If you combine this with the Easter Sheep BrickHeadz set, it will certainly be a much more engaging present than an Easter egg, just not a tasty. 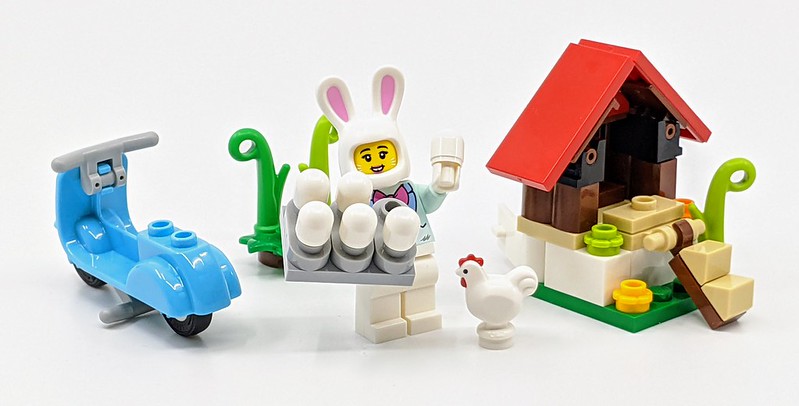