Now that The LEGO® Movie 2 is in cinemas, it’s the perfect to time to continue with my set reviews and look at some of the sets which play a key role movies story. One of the first LEGO Movie 2 sets to be revealed featured the fearsome battle-ready Ultrakatty. We saw a little of Unikitty’s alternate emotions in the first movie, but in the sequel she’s had to really toughen up. Her Ultrakatty state is used to help Lucy and Emmet scout space-faring invaders. In the movie Ultrakatty combines with Lucy’s off-roader to give it some extra juice, an ability able to be achieved with this set and set 70829. But how does the set shape up on its own? Let’s take a look

Ride into battle against the alien invader with THE LEGO® MOVIE 2™ 70827 Ultrakatty & Warrior Lucy! and rescue Emmet. Ultrakatty features a minifigure cockpit, a posable head which can be rebuilt for 3 different facial expressions, and a posable tail and legs. This awesome building toy includes Lucy and Emmet minifigures, plus a brick-built alien invader with a chomping mouth and rotating eye, to recreate action-packed scenes from THE LEGO MOVIE 2. 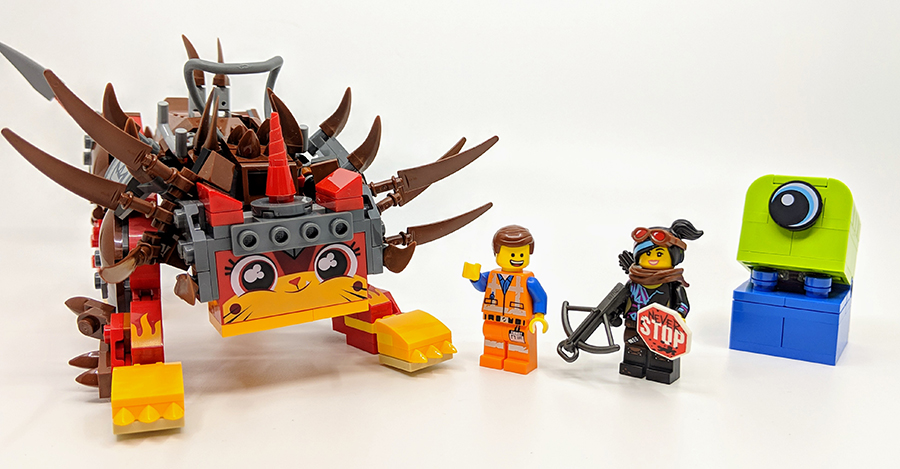 This is one of only a couple of set to feature a brick-built DUPLO® Invader. This lime green and blue coloured alien, uses System bricks to give the impression of being made from DUPLO. This does allow for some play function to be worked into the build, but I still wish that the DUPLO characters were actually made from DUPLO elements, I understand it’s for safety reasons. With a hinge connecting the two halves of the alien and the eye is mounted on a couple of Technic pieces, allowing it to be twisted around. 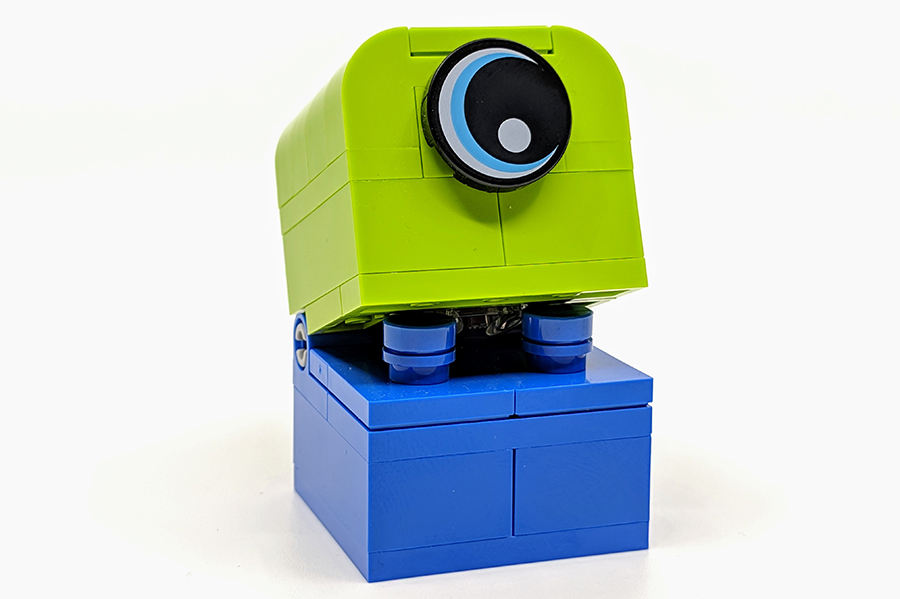 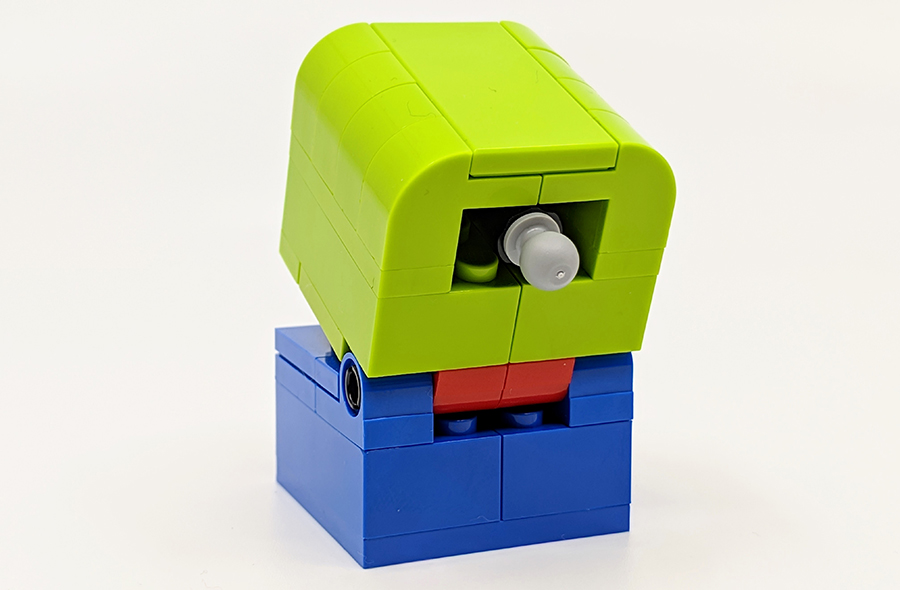 In her Ultrakatty form, Unikitty reminds me a lot of the elemental animals from the now retired LEGO Elves range and the short-lived brick-built creatures from Legends of CHIMA. So there’s a lot microjointed connections and hinges. This allows for plenty of posing possibilities, although depending on the surface you place the set it can be a little tricky to maintain the pose. Although much, much bigger than the standard Unikitty, Ultrakatty still features similar elements, just on a little larger scale. So she has a bigger head, which is an entirely new 5 stud wide brick. The LEGO Design Team tested various other brick sizes. But the 5-stud wide brick gave the desires look. Her conical horn is present but not extended with a conical 1×1 element. Her ears have expended from 1×1 cheese slopes to 1×2 wedges. 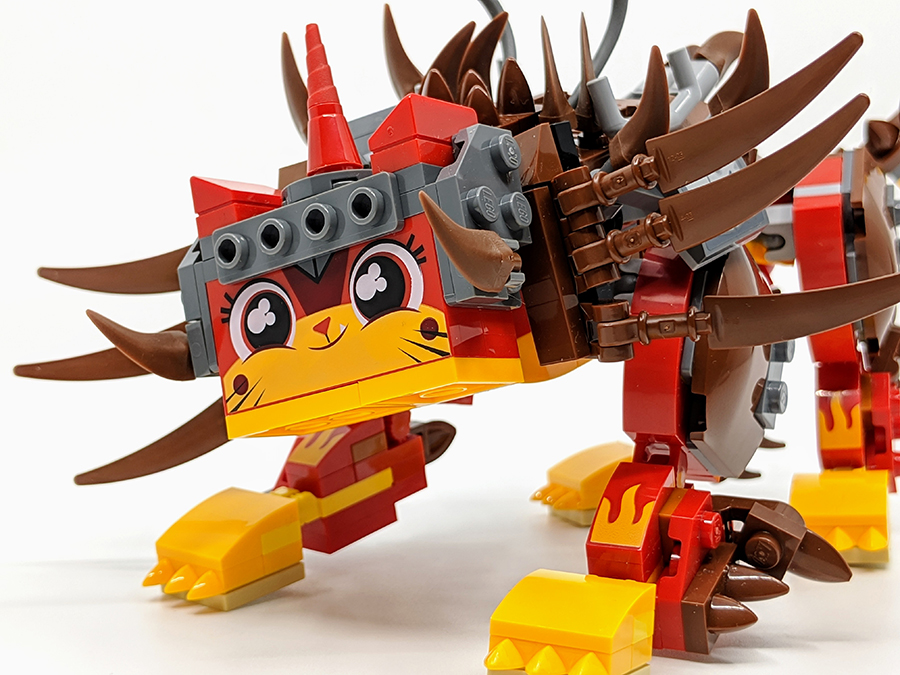 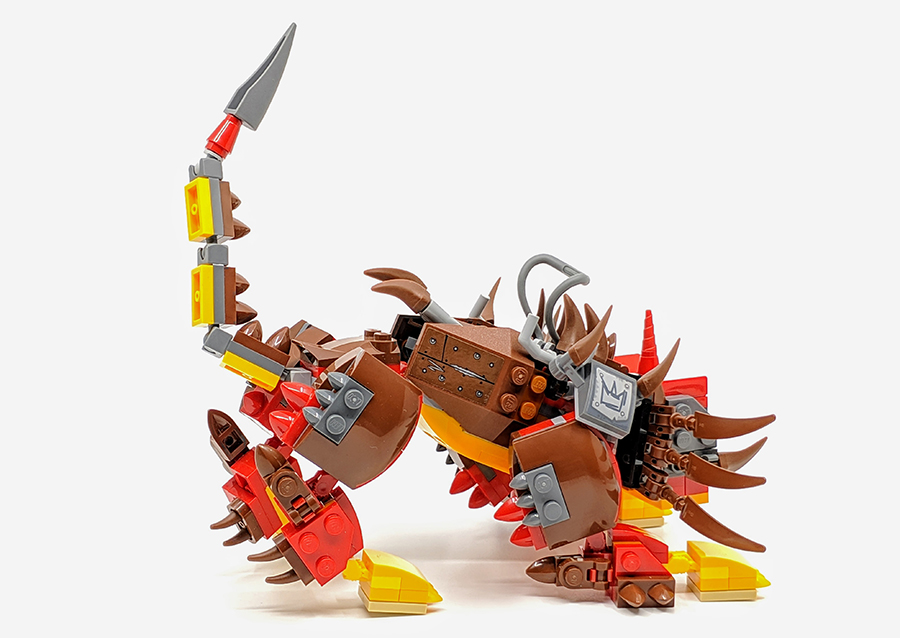 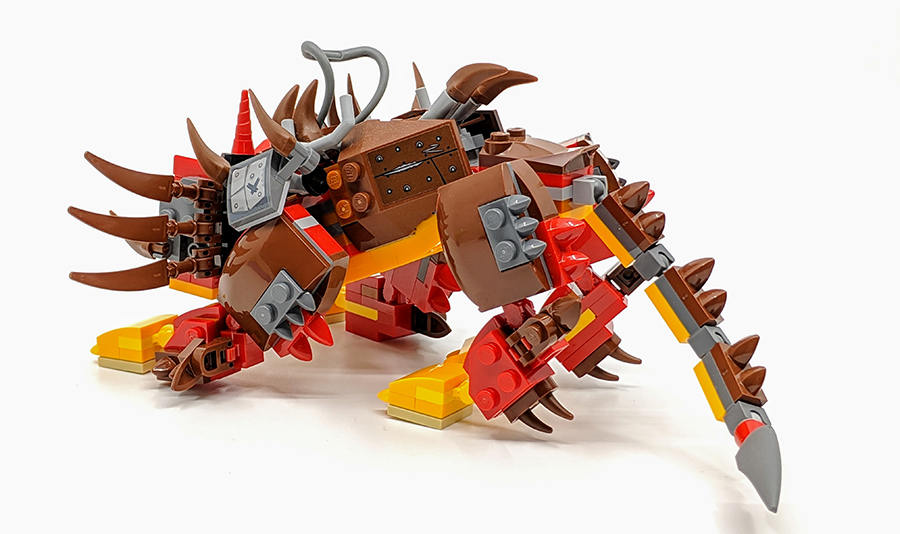 Being able to manoeuvre so many aspects of Ultrakatty, results in fun poses especially when combined with the printed face brick. As mentioned this is a new 5x1x2 brick. A 4-stud wide brick would have been too short and 6-stud wide one too long, so I’m glad a new size was settled upon. Better still you get three of this new elements, each featuring a different facial expression. Cutesy, annoyed and outright angry. They are a little more tricky to swap out, as there are more elements surrounding the brick. But I’ve always liked the ability to change Unikitty’s face as it’s such an integral part of her character.

Ultrakitty blends red, yellow and brown elements, which really help to reinforce her angry nature and battle-ready appearance. Thankfully there are also a number of grey pieces dotted about the set, making the microjoints a little less intrusive.There’s also an area on Ultrakatty’s back, upon which Lucy can be seated to ride into battle. 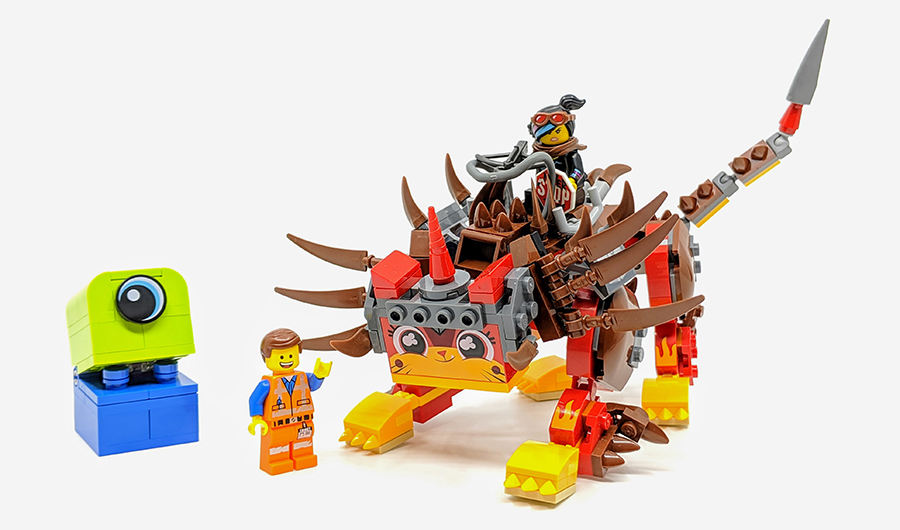 The set contains two minifigures and it’s two characters who appear in many other LEGO Movie 2 sets. Lucy who is kitted out in her Battle-ready gear, with includes the new hairpiece with goggles and a neck scarf element which has a notch so it can be worn with a quiver piece. Emmet is a little more generic, his print detail is a little worn but apart from that he’s similar to all his other appearances. Both minifigures have alternate face prints. It would of been nice to see some different variants of the characters or maybe different characters altogether, but Emmet and Lucy are closely tied to Ultrakatty’s appearance in the film. Ultrakitty has gained a huge fanbase and thanks to her many forms, there’s plenty of her around to collect. But in her Ultrakatty form, you’re getting an almost entirely new character. However there are certain aspects of this bigger version which share the same DNA has her normal forms. As a fan of the Masters of the Universe from the 80s, Ultrakatty reminds me a little of He-man feline friend Battle Cat. Another character who transforms from a more gentle form. The DUPLO aliens are great foes, despite not actually being made from DUPLO bricks, it’s nice to a unique version in this set. The set could almost do without the Minifigures, but it would have been nice to have someone different in place of Emmet. I understand he and Lucy are the franchises main characters, but they feel like they appear in too many sets. It wouldn’t be so bad if they were variants but the same minifigures are in numerous sets. Despite that, it was fun to build, even if it is a little tricky to pose.