It may well be Boxing Day, but the release of new LEGO® sets stops for no-one. The eagerly awaited range of new The LEGO Movie 2 sets are all released today. There are 19 different sets to collect and build, each featuring characters and builds inspired by the upcoming movie sequel. I’ve already taken a look at a number of the sets ahead of their release and you can check out those reviews here. The full range of The LEGO Movie 2 playsets are available now from LEGO Brand Stores, LEGO retailers and online. Visit your regional shop.LEGO.com to order yours today.

Kids can raise their master-building ability to another level with Emmet’s Thricycle! This awesome building set features a minifigure seat, 3 vertically stacked rubber tires and foldout stabilizers. It includes a fuel station, with a buildable gas pump, catapult function and parking spot for the Thricycle, plus THE LEGO MOVIE 2 characters—an Emmet minifigure and a brick-built alien invader with a chomping mouth and rotating cyclops eye. Includes Emmet minifigure and buildable Alien Invader. 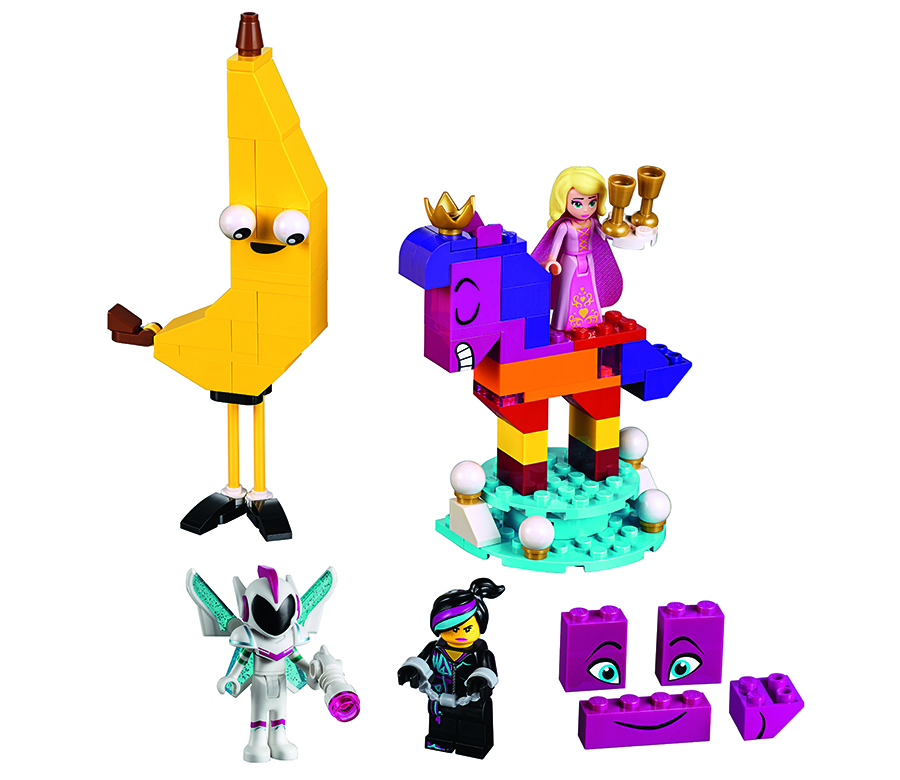 Kids can join forces with Benny’s Space Squad for fun adventures in outer space. This action-packed building set features a spaceship toy with a minifigure seat and a lunar buggy with 2 minifigure seats. Role-play scenes from THE LEGO MOVIE 2 with this space toy for kids including 4 LEGO astronaut minifigures with assorted accessories. 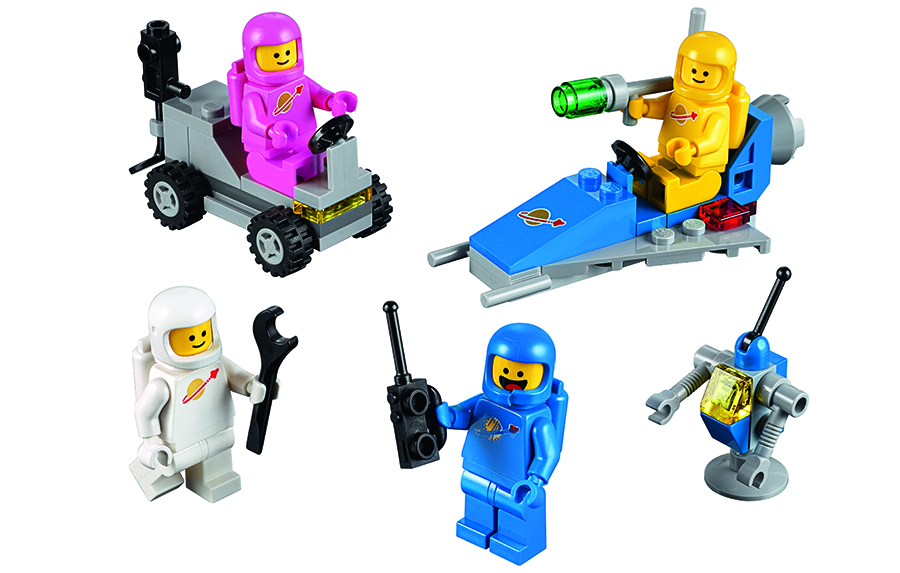 Specially designed for younger builders ages 4 and up, this playset lets kids use the tools to fix Benny’s Spaceship and Emmet’s Escape Buggy. Kids can “pump gas” into the vehicles and launch them into orbit, then use the spaceship’s buggy to explore new planets! Includes Emmet and Benny minifigures.

Builders can scuttle into action against Star with this action-packed Batman playset featuring the famous pirate MetalBeard in crabmech form, with a built-in LEGO MetalBeard minifigure head, opening treasure chest with MetalBeard’s internal organ elements, flip-down crow’s nest with a flag and posable legs, plus a Batman throne with an adjustable ‘You’re Welcome’ sign. Includes 2 minifigures, a brick-built Star figure, and weapons and accessories. Introduce toddlers to the color and creativity of THE LEGO® MOVIE 2™ with this fun preschool building set. Little fans of Emmet and Lucy will love helping them defend against the easy-to-build alien invaders! Then mix all the bright and chunky DUPLO bricks up so young children can create more aliens of their own, developing imagination and fine motor skills on their journey to becoming the next master builder! Includes 2 LEGO DUPLO figures: Emmet and Lucy, plus 4 buildable alien invaders. 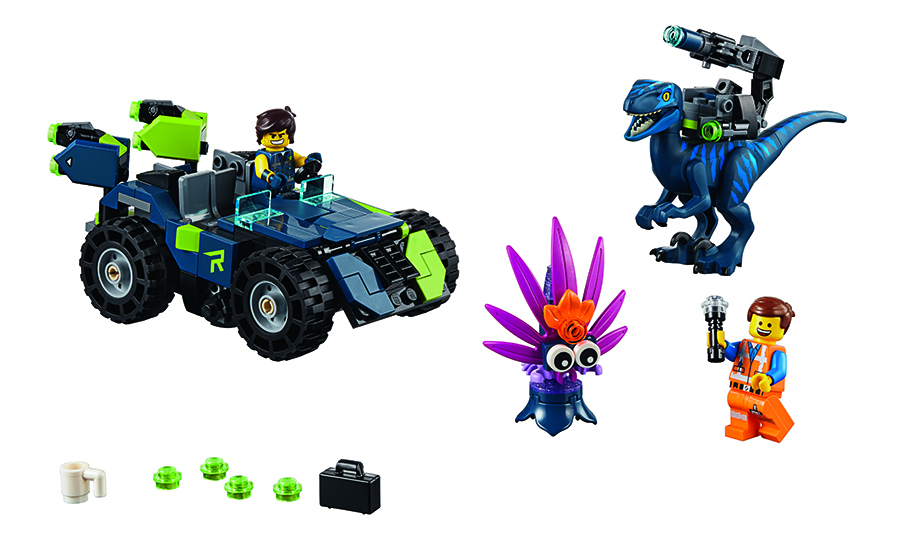 Kids can ride into battle against the alien invader with this building set. Ultrakatty features a minifigure cockpit, a posable head which can be rebuilt for 3 different facial expressions, and a posable tail and legs. This awesome building toy includes Lucy and Emmet minifigures, plus a brick-built alien invader with a chomping mouth and rotating eye, to recreate action-packed scenes from the film. 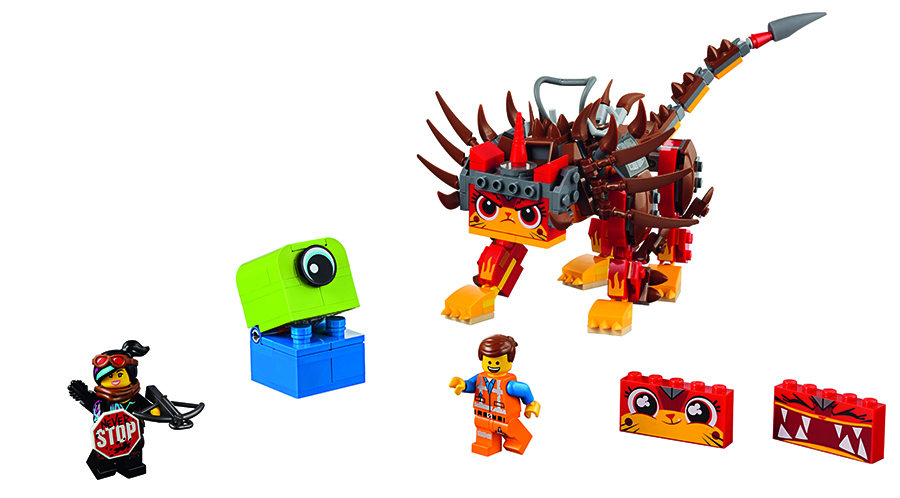 Open a world of master building adventures with this versatile builder box, featuring 3 buildable models—Emmet’s digger vehicle, house and construction mech. The digger has an adjustable front bucket to lift rubble elements, the mini-build house features an opening door and the rotating construction mech has a minifigure cockpit, 4 posable arms and 2 demolition balls. Includes an Emmet minifigure and a brick-built alien invader for endless role-play fun.

Give your young master builder hours of fun with this versatile builder box! This creative toy features 3 buildable models—Lucy’s motorcycle with a ramp, a rotating dance stage and the Unikitty spa with spa bath and washstand. Includes a Lucy minifigure and a brick-built Unikitty figure for endless role-play fun. 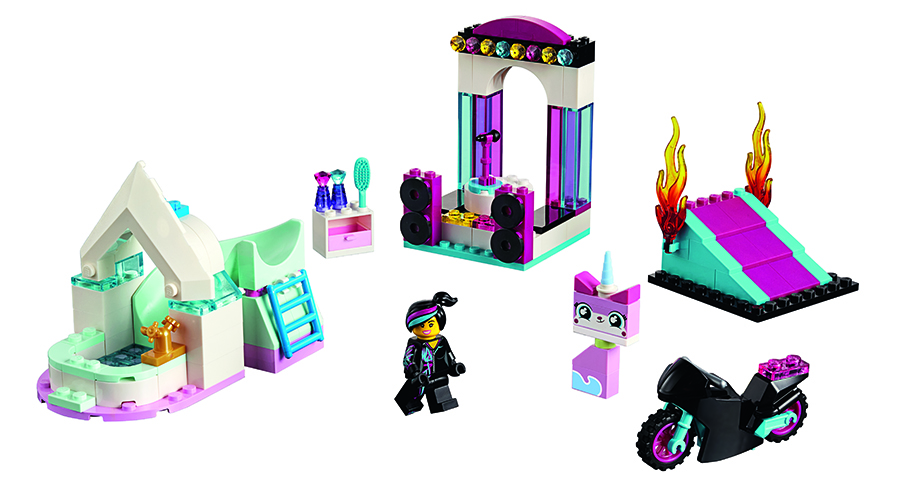 Kids can build and rebuild THE LEGO® MOVIE 2™ shape-shifting star Queen Watevra Wa’Nabi in 15 different forms with this open-ended creative building box! This set has instructions to build each version of the shape-shifting queen, from a grumpy volcano to a happy butterfly or colorful rocket, and also includes inspirational ideas for young master builders to create their own shapes. Kids can make their own movies with this versatile building set, featuring a movie stage, camera stand for a smartphone device and plenty of cool action props! The stage features a frame with sliding, adjustable arms at the top to hold and animate props, characters and accessory elements, a double-sided backdrop with alternative scenes, plus a platform with built-in sliders to move characters around. Young film makers can attach the camera stand to any of the 3 special points on the stage for different angles and camera panning movements. This THE LEGO MOVIE 2 set also comes with action props like Emmet’s Escape Buggy and Rex’s Rexplorer, 3 minifigures, a minidoll figure, 4 brick-built figures and a raptor figure for creative play. Builders can power into battle against Sweet Mayhem and Star with this fun set that features a built-in MetalBeard minifigure head, rotating turret with adjustable shooting cannons, adjustable shark shooter with snapping jaws, crow’s nest and flag and a huge front wheel. Includes an Apocalypse-borg Benny minifigure and a Sweet Mayhem minidoll figure with cool weapons and accessories, plus a brick-built Star figure to recreate action-packed adventures from the film. Kids can help Emmet and Lucy evade capture by Sweet Mayhem’s Systar Starship, featuring an opening cockpit for a minidoll or minifigure, retractable landing gear, disc shooter, a roll of stickers and an opening prison cell. This fun construction toy includes 2 minifigures, a minidoll figure and buildable Star and Heart toy figures to role-play action from the film. This 2-in-1 building set features Emmet’s home which can be rebuilt into a rocket. The house toy opens out for easy interior play and has a detailed living room/kitchen and attic. Remove the roof and use parts from the water tower and barricade to create a rocket with spring-loaded shooters and adjustable engines. Includes Emmet, Lucy, and Rex Dangervest minifigures, plus buildable Planty and Warrior Kitty characters. Kids can board the Pop-Up Party Bus and party on with Chad, Amber and Zebe. This fun building set features an opening cockpit for the Zebe figure, opening roof and sides for easy play, foldout loudspeakers, a LEGO light brick to light up the rotating dancefloor and a flip-up disco ball with translucent colored elements. Includes Unikitty, Chad and Amber minidolls and a brick-built Zebefigure. Kids can team up with Rex, Emmet and the raptors against the Plantimals with this building set. The Rexplorer features 2 opening cockpits, spring-loaded and stud shooters, rotating engines, an opening rear compartment for interior play, and a removable speeder. Features 2 raptor figures with a brick-built mountable stud shooter and raptor skateboard, plus 2 brick-built Plantimals (including one with a trap function). Includes Rex Dangervest and Emmet minifigures.