A few days ago the new wave of LEGO® Harry Potter magically appeared online thanks to a premature uploading by Amazon. However the sets have been officially revealed this morning. Available from August 1st in the US and everywhere else from June 1st, the latest wave will feature 5 new sets and feature iconic scenes from the third and fourth Harry Potter movies, including the Triwizard Challenge and Yule Ball. They also include some new Wizarding World Minifigures to collect and you can also continue to build Hogwarts School of Witchcraft and Wizardry; by connecting Hogwarts Clock Tower to Hogwarts Great Hall and Whomping Willows from last year wave of LEGO Harry Potter sets. Check out the images and set details below. Plus learn more about the LEGO Harry Potter Advent Calendar here.

CONTINUE THE MAGIC WITH NEW LEGO® HARRY POTTER™ SETS FOR 2019

Available from June 1st, the new products offer builders the opportunity to recreate scenes inspired by the 3rd and 4th Harry Potter films.

Sets inspired by scenes from Harry Potter and the Prisoner of Azkaban include the iconic Knight Bus™ that transported Harry from the Dursley’s home to The Leaky Cauldron, as well as an all-new stag Patronus™ element in a new set that allows fans to play and help save Sirius Black from the Dementors in the Forbidden Forest.

Sets inspired by – Harry Potter and the Goblet of Fire include the first challenge of the Triwizard Tournament, with a brick-built Hungarian Horntail dragon guarding a golden egg. LEGO minifigures in the set include Triwizard Tournament competitors Fleur Delacour, Viktor Krum and Cedric Diggory.

Additional characters from the Harry Potter films that will appear in LEGO minifigure form across the sets include Harry Potter, Ron Weasley and Hermione Granger, as well as Sirius Black, conductor of the Knight Bus Stan Shunpike and more – in addition to slightly larger Minifigures of Hogwarts groundskeeper Rubeus Hagrid and Beauxbatons headmistress Madame Maxine.

Join the conversation on social media using #LEGOHarryPotter to share your own magical builds! 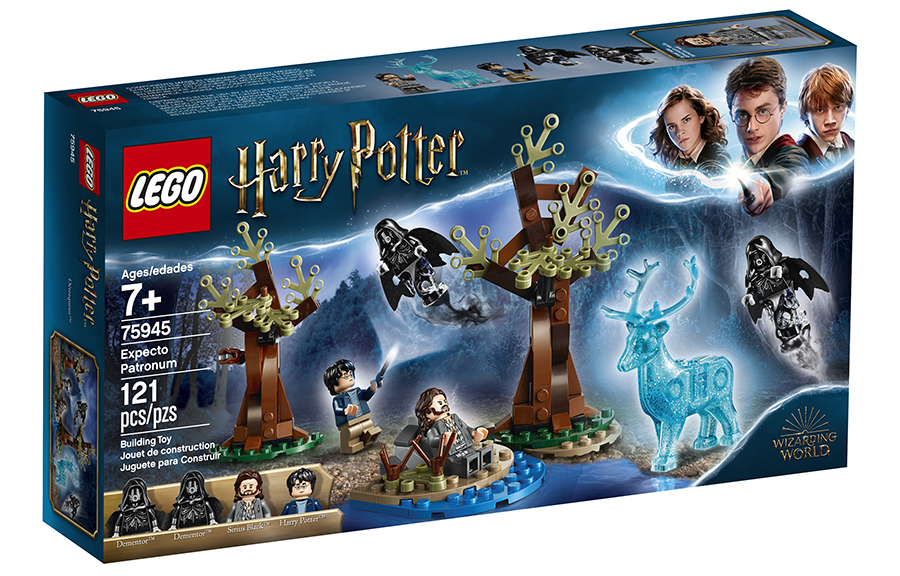 Transport fans of Harry Potter aged 7 and over to a magical world of wizards, Dementors and mythical creatures with this LEGO® Harry Potter 75945 Expecto Patronum building set. Kids will love the details in the Great Lake Forbidden Forest scene, firing the Expecto Patronum spell at the 2 Dementor minifigures, and summoning Harry’s Patronus charm—a new-for-August-2019 stag figure—to ward them off his godfather, Sirius Black. With 4 minifigures and endless magical possibilities, this Harry Potter LEGO set will conjure up a magical world of imaginative play. 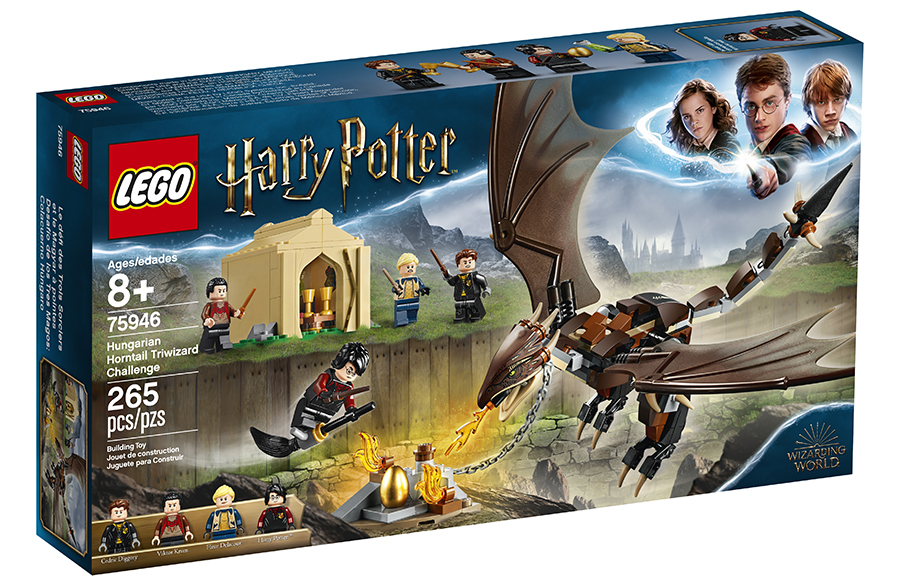 Young witches and wizards can battle a Hungarian Horntail dragon with Harry Potter™!

Give your young Harry Potter fan the chance to battle one of the most dangerous dragons in the wizarding world. The LEGO® Harry Potter 75946 Hungarian Horntail Triwizard Challenge is a gift for kids filled with magical adventures. Anyone aged 8 and over will love helping Harry compete against rival students from other schools of magic, as they strive to retrieve the mysterious golden egg. But that’s not all. There’s a Hungarian Horntail dragon to defeat! With its moveable limbs and wings, it’ll take quick- thinking wizardry to outmaneuver this ferocious beast. With 4 minifigures included, this Harry Potter LEGO dragon set will inspire endless imaginative adventures. 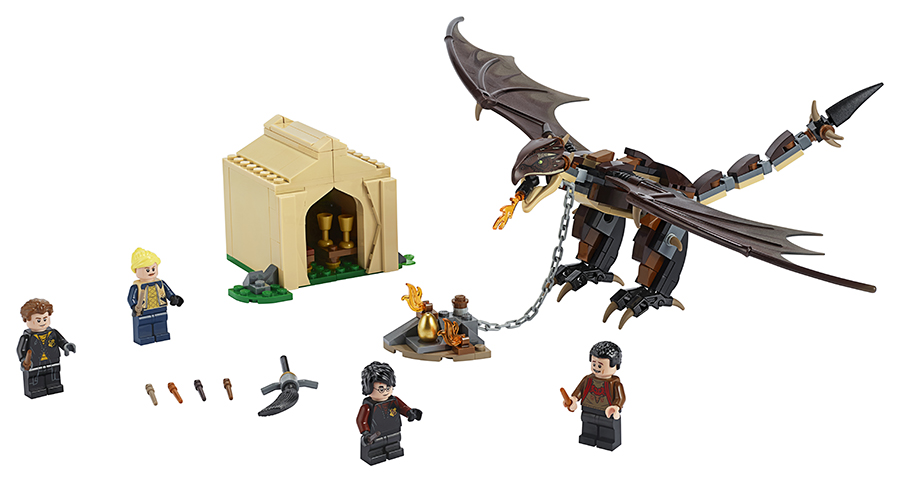 A visit to Hagrid’s hut leads to a daring Hippogriff rescue! 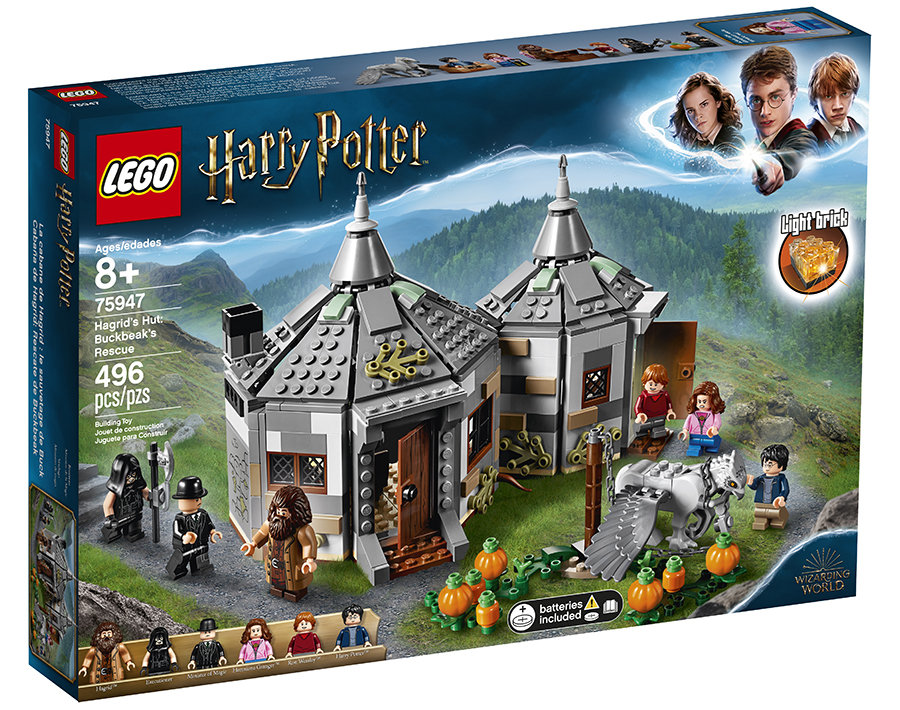 Young witches and wizards can recreate magical scenes from Harry Potter™ and the Prisoner of Azkaban™ with the LEGO® Harry Potter 75947 Hagrid’s Hut: Buckbeak’s Rescue playset. This cool toy for kids gives Harry Potter fans aged 8 and over endless opportunities for imaginative role-play. They can explore the detailed interior of Hagrid’s hut, hide behind Hagrid’s pumpkin patch when the Minister of Magic and the Executioner arrive, then rescue Buckbeak™ the Hippogriff from the Executioner’s axe. The magical adventures will never end with this Harry Potter LEGO set. Includes 6 minifigures, a buildable Buckbeak figure with moveable wings and head and a host of accessories and features including a button-operated light brick for the fireplace. Transport fans of Harry Potter™ aged 9 and over to a magical world inside the LEGO® Harry Potter 75948 Hogwarts Clock Tower set. With 8 minifigures and iconic locations from Harry Potter and the Prisoner of Azkaban™ and Harry Potter and the Goblet of Fire™, kids will be immersed in a world of imaginative play. Whether visiting Dumbledore’s office or attending a Defense Against the Dark Arts lesson, traveling through time by resetting the tower clock or unwinding at the Yule Ball by operating the ‘dance’ function… once they enter the Hogwarts Clock Tower, they’ll never want to leave! 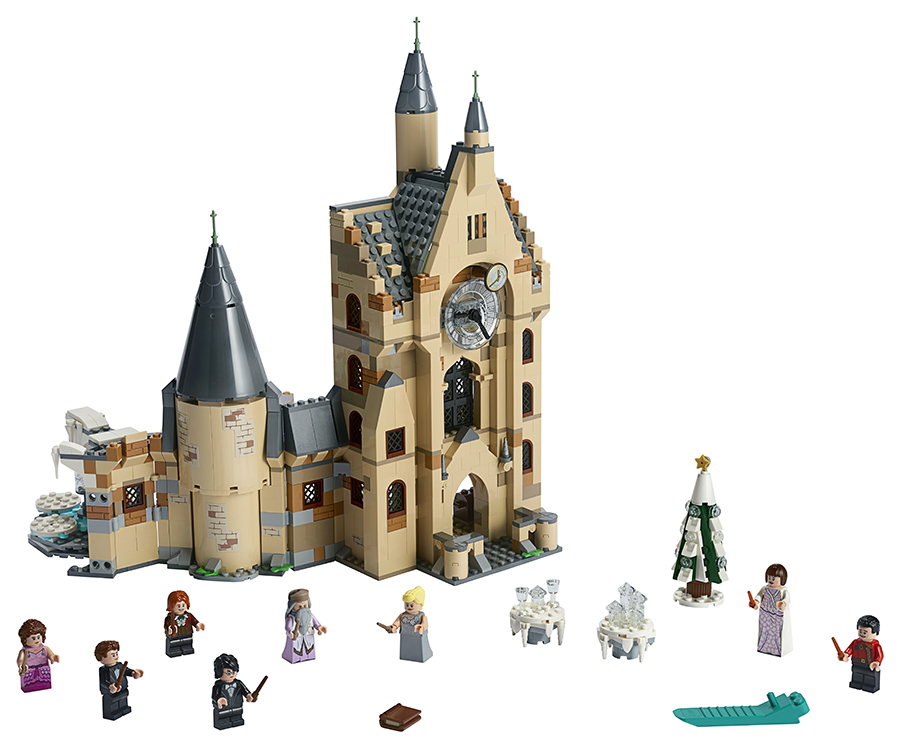 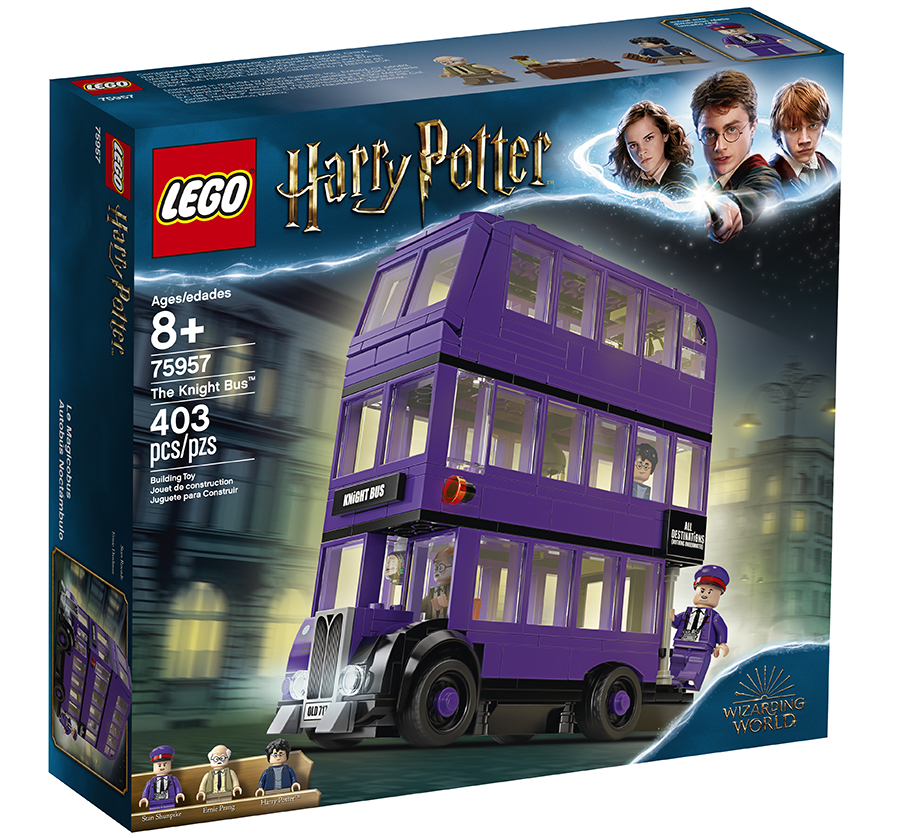 Give young wizards and witches a wild ride aboard the Knight Bus with Harry Potter!

Give your young witch or wizard the ride of their life aboard the LEGO Harry Potter 75957 Knight Bus! When kids catch the purple triple-decker bus, they know they’re in for a wild ride. With a hinged side panel for easy access to the interior, and a removable roof to reveal the upper deck, this magical toy bus playset is bursting with play potential. Once Harry’s trunk has been loaded, it’s time to hold tight. As the vehicle races away, swerving around corners and bouncing over bumps, kids will love how the bed slides back and forth and the chandelier swings from the ceiling. Includes 3 minifigures.