A few years ago LEGO® introduced a new theme known as LEGO Xtra. Which is a range of accessories to compliment other LEGO sets or MOCs. There has been a mixture of polybags, playmate and even a rather cool sticker pack. Then back in May, two new additions to the Xtra range were revealed. These have expanded the range further with Xtra Tape sets. These compose of a small selection of accessories and a roll of tape. So far there are two surfaces available in tape form – water and road. I’ve now got both sets and thought they would make for an interesting review, especially as it isn’t clear what the tape actually is, so here’s my review of both the LEGO Xtra Water and Road Tape sets.

When the images of the sets were first revealed it was a little unclear exactly what the tape was. Apart from featuring a coloured design on the tape, the product listing doesn’t really offer much more information. Well, the tape is indeed sticky and is best described as a sort of high-quality masking tape. So it can stick on most surfaces and will be easy enough to remove. As it’s sticky, I wouldn’t say its reusable. If only used on a flat clear surface, you may get away with being able to reuse it at least once. As the tape is similar to masking tape, it can be easily torn, although it’s certainly better to cut with scissors. The roll includes 15 metres of tape, so there is plenty to use. But of course, the tape is only one part of the set. There are also a variety of elements, which are focused around the set’s themes. 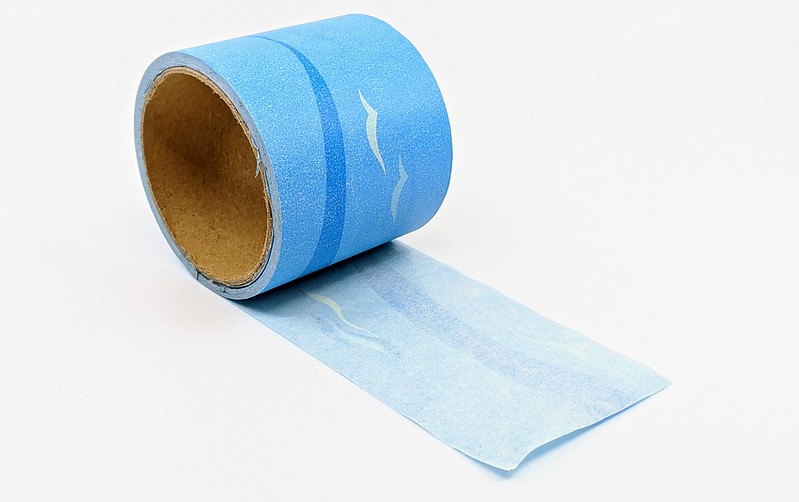 LEGO® fans will be thrilled to stage exciting action and races with this cool Road Tape accessory set (854048). Roll out the grey tape featuring road markings, tire skid marks and grass effects, and kids can create fun stories with it and 8 elements, which include a speed sign, traffic cones, traffic light and moped. The set can be combined with other LEGO® sets, so kids can race all their vehicles along the tape. 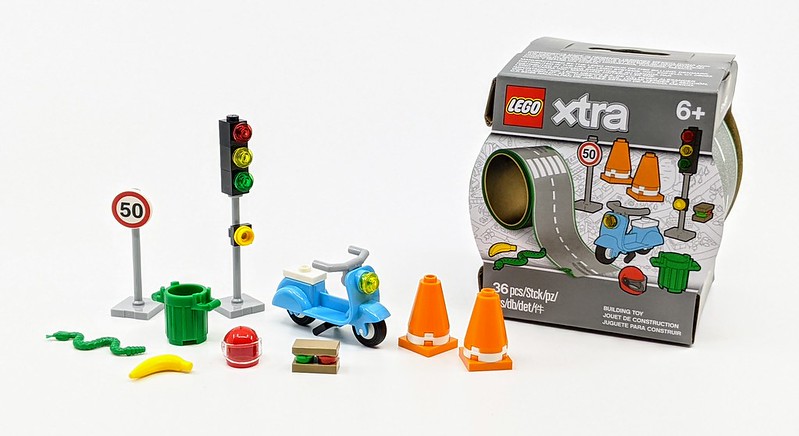 As the name suggests the tape’s design is themed towards the surface of a road. So there is the classic dark grey surface, dotted with a row of white lines. It’s bordered with a sliver of green and every so often there are a set of skid marks. Within the roll of tape, you’ll find a small bag of elements and the instructions. There is minimal building as most of the things included are made of just a couple of pieces. So the Road Tape set includes a light blue scooter, which has only appeared in a couple of large sets. Two traffic cones, a set of traffic lights, speed limit sign, red crash helmet and then this is where things get a little weird – a trash can, a sandwich, a banana and randomly a snake. 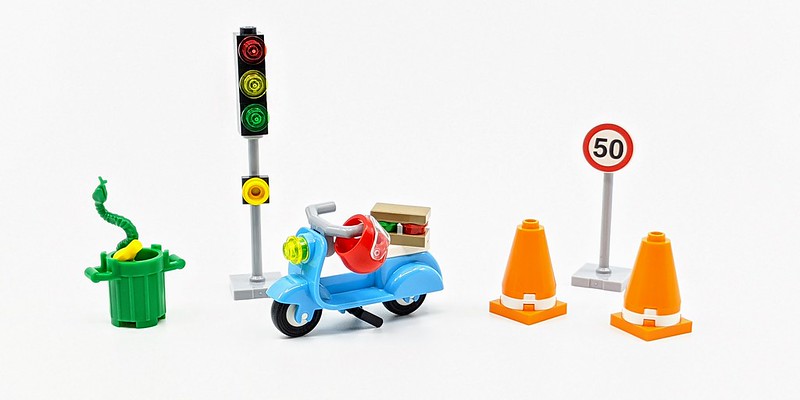 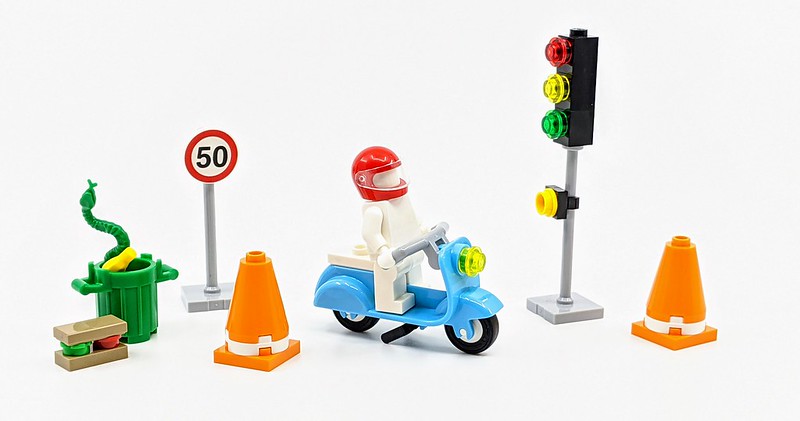 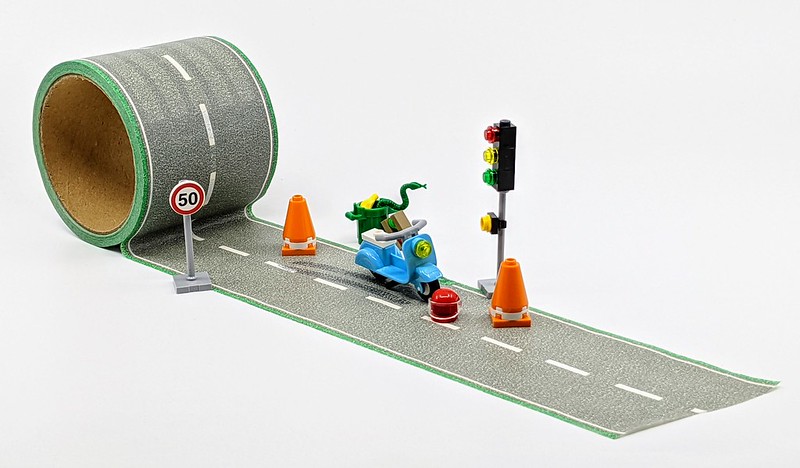 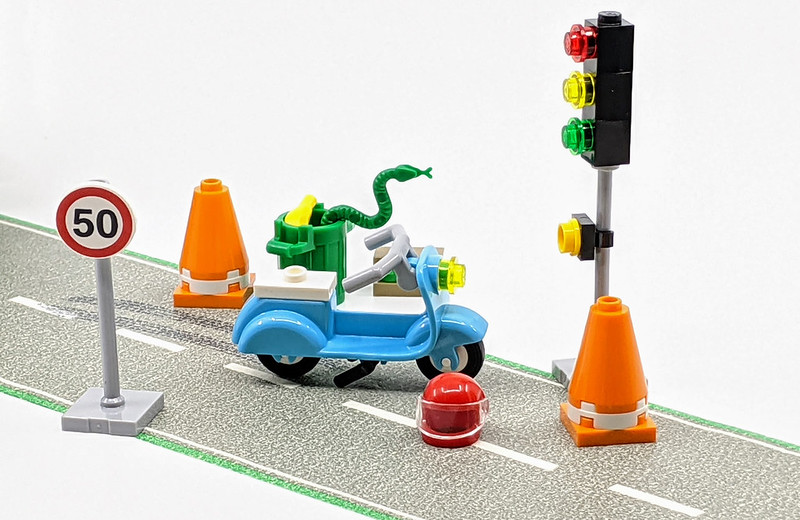 LEGO® fans will love bringing the sea to life with this awesome Water Tape accessory set (854065). Roll out the blue tape, featuring ripple and wave effects, and kids can immediately create fun stories from the sea with it and 10 elements, which include a frog, fish, crab, seaweed and raft. Imaginative youngsters will be captivated for hours 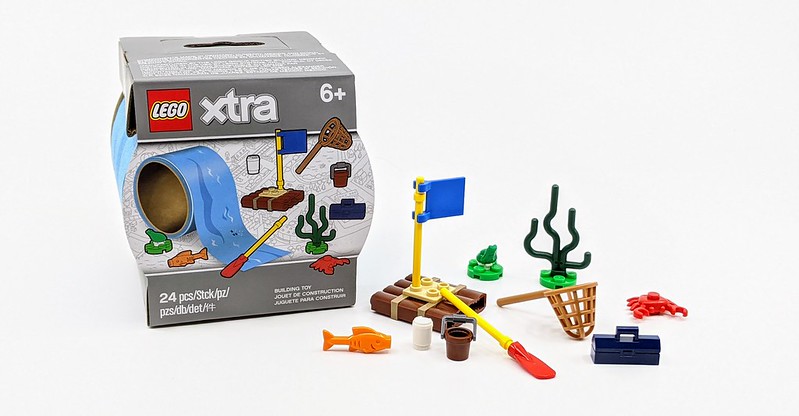 As with the Road Tape, the Water Tape has an aquatic design. So unsurprisingly that means a lovely blue surface, speckled with a school of fish here and there. It would look really nice under some clear elements in a cityscape MOC. Accessory wise, things are slightly less random than with the Road Tape. So you get a little wooden raft, complete with a sail and oar. There a fishing net, with a fish. Two water plants, a frog, a red crab and a fishing tackle toolbox and oddly a takeaway drinks cup. 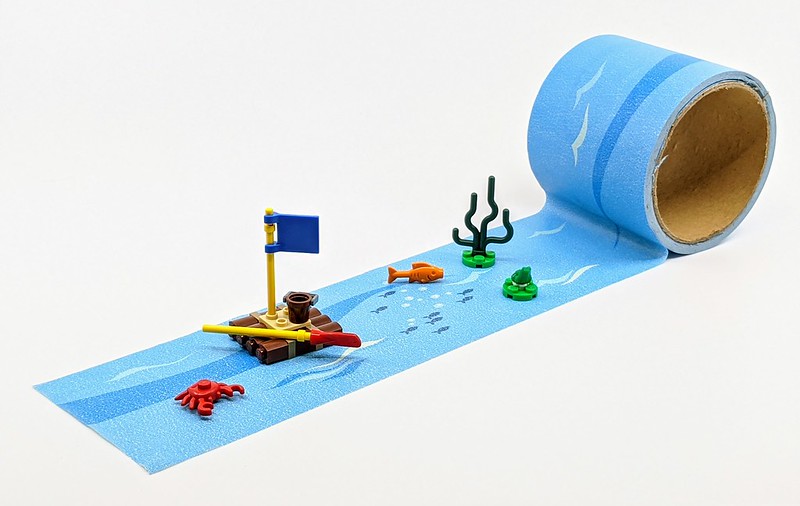 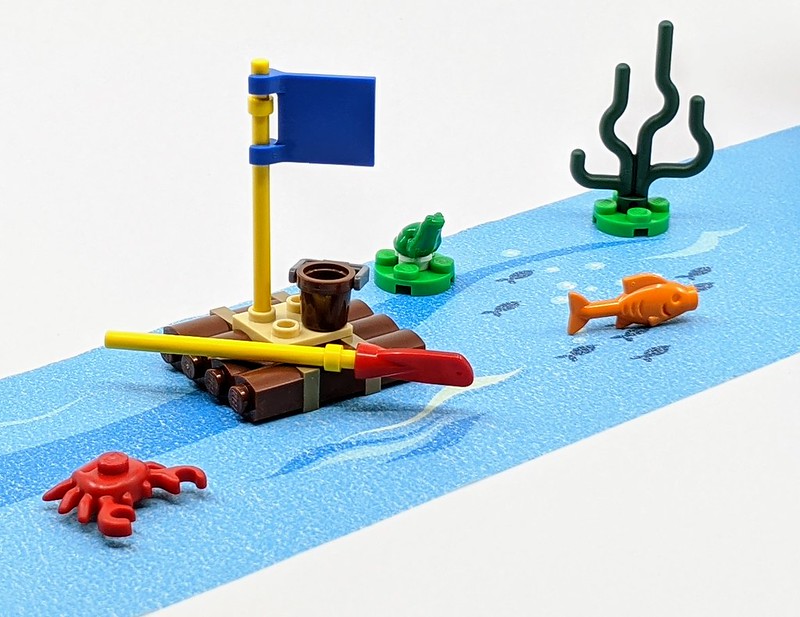 Overall: The LEGO Xtra range is interesting as it is a little tricky to pinpoint who sets are aimed at. The various accessories are great to compliment MOCs but then sets like these will probably interest kids a lot more. Especially the tape aspects of the sets. In terms of accessories, you actually get less than you would find in one of the Xtar polybags. Still, they are unique little sets and certainly worth picking up for some of the elements. I like the style of tape used and it means it can be used on various surfaces, without being a pain to remove. You’ll find the new LEGO Xtra Tape sets in LEGO stores and online now. 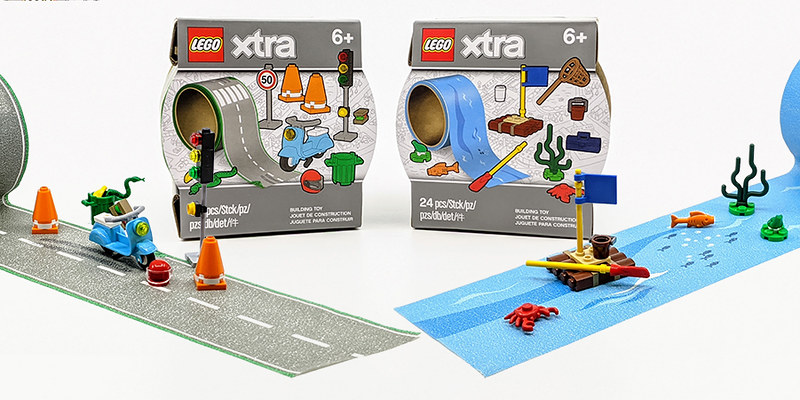