LEGO® Stores have provided Build-a-Minifigure stations in many of their stores for a while now, but last year they started to be the source of some exclusive elements. A number of spooky-themed parts kicked started various seasonal Minifigures and the trend continues with another set of Halloween Minifigures. Although many stores aren’t currently offering the opportunity to physically build the Minifigures yourself, you can still grab a pre-made pack of three Halloween Minifigures. These each include new or rare Minifigure parts, not currently available anywhere else. So here’s a closer look at them. 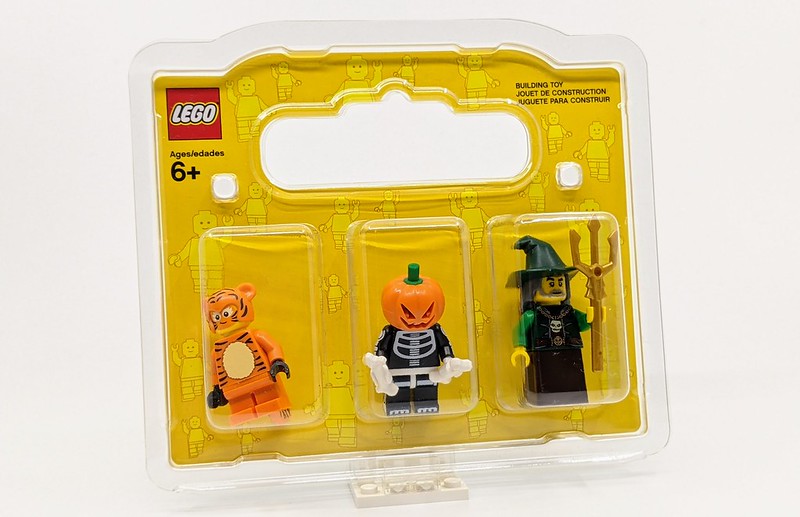 This year’s Halloween-themed offerings include a Pumpkin-head Skeleton Guy, a Warlock and a cute little Tiger Cub. The Skeleton torso has previously been available in the Monsters Minifigures series from back in 2015. In fact, each Minifigure has a connection to the Monsters CMF series, but more on that later. The Skeleton guy also features a classic Skeleton head and a fairly rare pumpkin ‘hat’ element. The Warlock is a completely new creation, with a newly printed torso atop a brown skirt base and a recoloured hat. This has appeared on the Scarecrow Minifigure from the Batman sets, most recently in the Diagon Alley set and on the Wacky Witch Minifigure from the Monster CMFs. Finally, there is a little Tiger Cub character, which uses the great tiger print face painted head from the LEGO City Fun Fair People Pack. This is combined with recoloured pieces including the headpiece used for the Cheetah Minifigure from the DC CMFs. 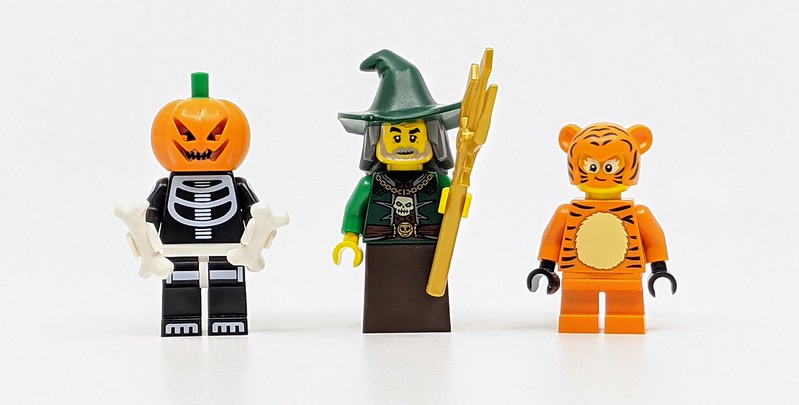 As mentioned above these spooky new Minifigures have a connection with various characters from the LEGO Minifigures Monster Series. With the Pumpkin-head Skeleton having the same torso as the Skeleton Guy costumer, the Warlock having a similar hat the Witch and the Tiger Cub have a passing resemblance to the Tiger Woman costumer.