This year marks the 60th anniversary of Spider-Man and part of the celebrations will see Spidey and some of his colleagues, transformed into buildable figures. The set follows the same format introduced earlier this year with the Iron Man figure. This isn’t the first time we’ve seen Marvel buildable figures, some of the first LEGO Marvel Super Heroes sets were based on iconic House of Ideas characters. These new buildable characters are very different to those from 2012, with less of a focus on unique elements. So ahead of their release next week, here’s a closer look at both the LEGO® Spider-Man and Miles Morales buildable figures. 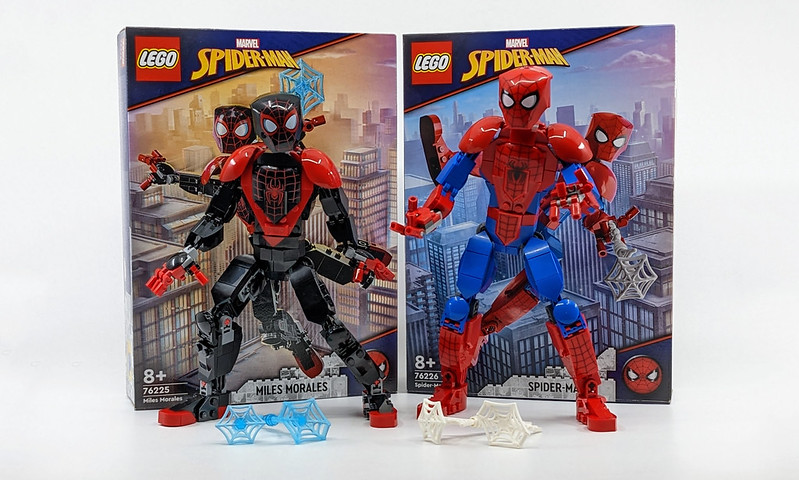 The build of both characters is extremely similar, with both near identical in their use of parts, particularly on the arms and legs. There is a slight difference in the torso, in which Spider-Man uses a few more elements compared to Miles. Although they have a similar appearance to previous buildable figures such as the original Marvel ones or the more recent Star Wars ones, there is minimal focus on unique elements. Past buildable characters have relied heavily on special parts for the heads and plenty of Technic pieces for the best of the body and limbs. That’s not entirely the case with these characters. Although they use a unique armour-plate style element for the head, the rest of the build is mostly constructed from System bricks. 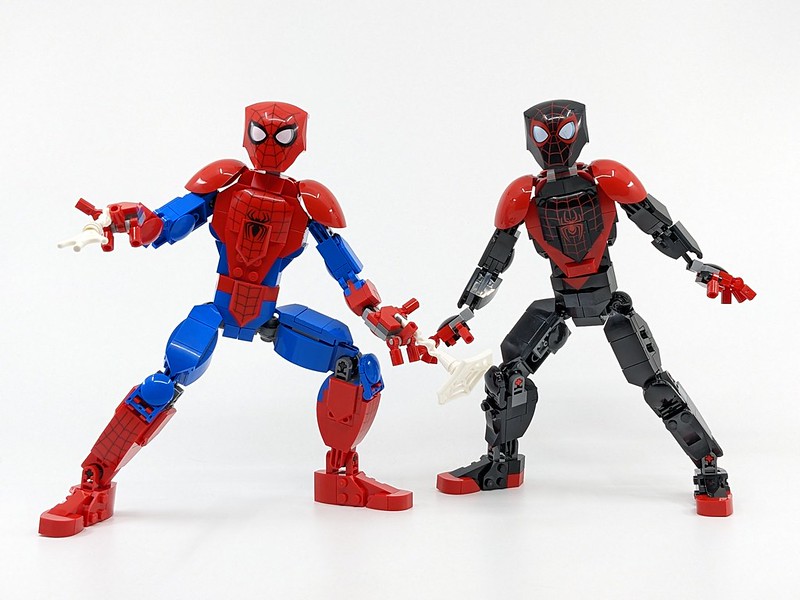 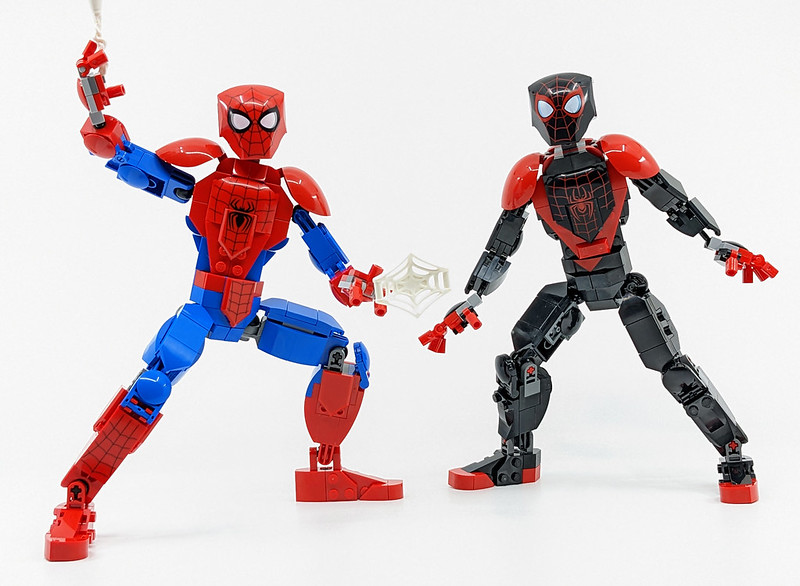 They obviously have numerous points of articulation including the feet, knees, waist, arms and legs. This allows for a pretty wide range of motion. Although I did find that the pointed plates used on the top of the legs were prone to popping off if the legs were moved too far. The flap covering the knees, could also ‘lock’ in the joint if not folded forward a little before trying to bend the leg. Both sets are released on September 1st and there will be a third set based on the Venom character, released at the same time. 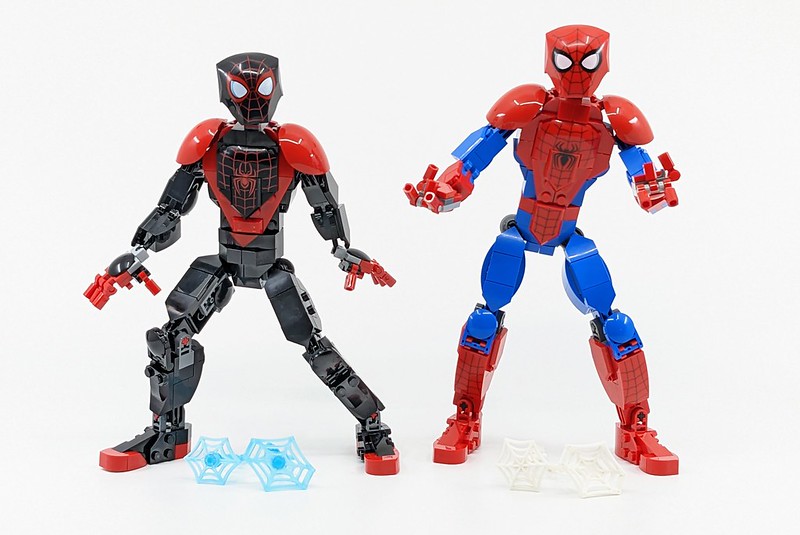 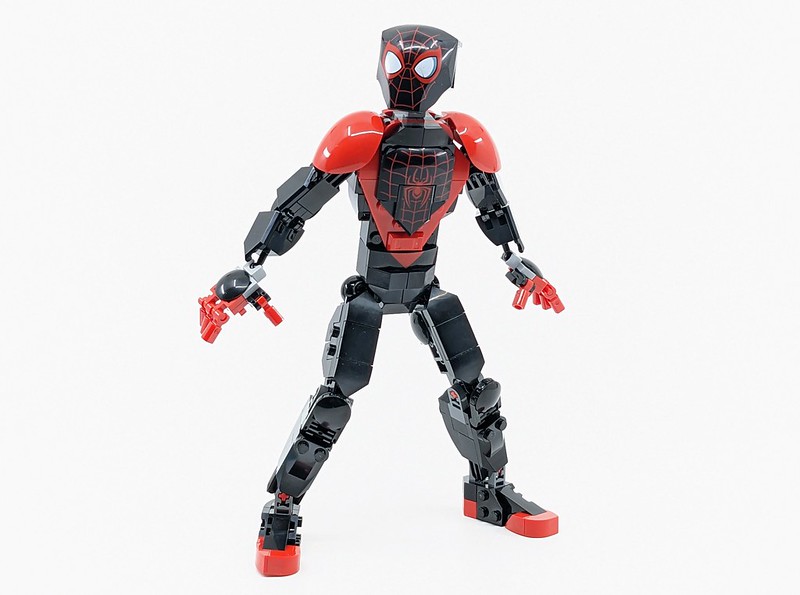 Miles Morales is one of many characters to spin out of the Spider-Verse. Introduced in 2011, the character followed a similar path to Peter Parker’s and gained special powers after being bitten by a genetically engineered spider. Miles has always been a popular character, even more so following the release of the animated film, Into the Spider-Verse and the PlayStation game, Spider-Man: Miles Morales. 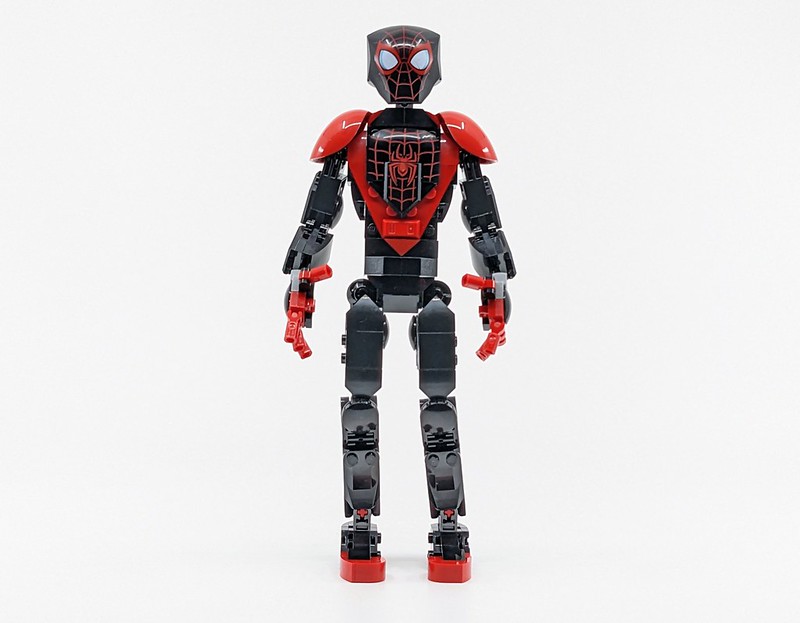 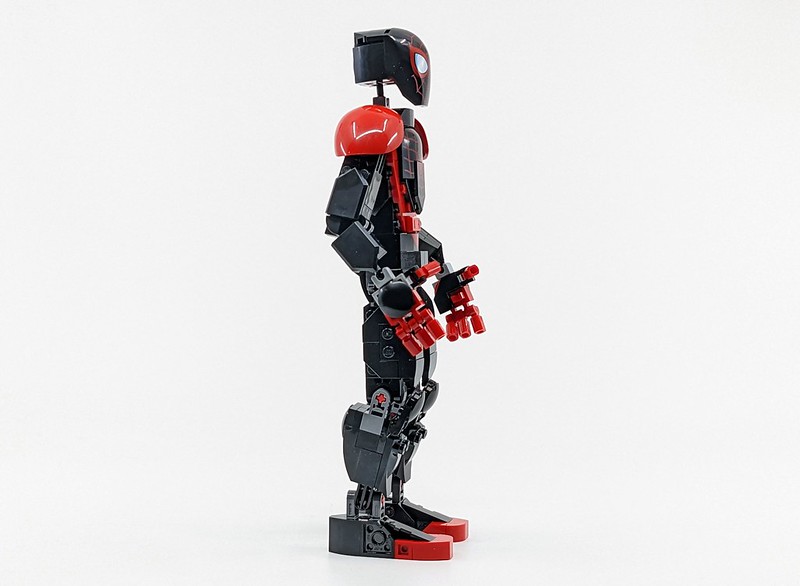 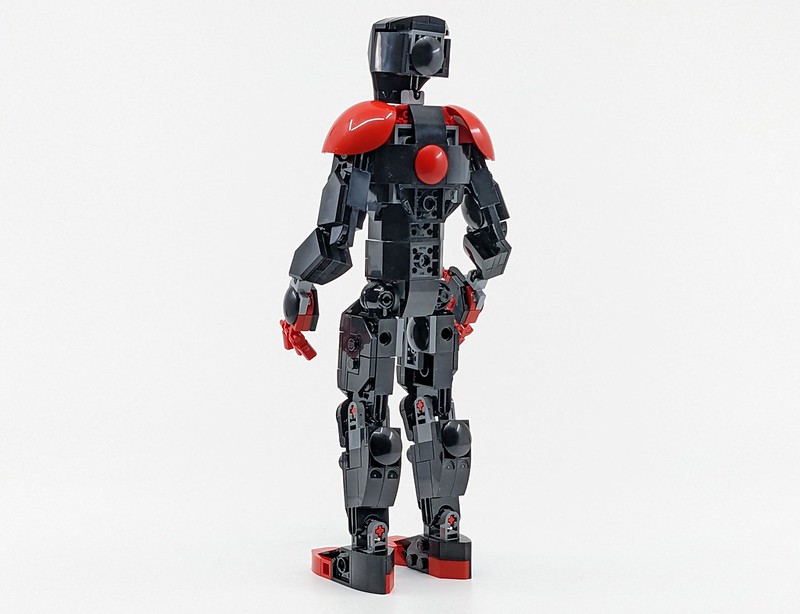 The character’s strong connection to Marvel fans has seen him appear in a number of LEGO sets, including DUPLO ones. This buildable figure features Miles in his original red and black suit. Some of the suit’s detail is achieved with printed elements. Two different pieces are used on the chest, having the web design and spider logo. Unfortunately, the particular set I have has a couple of slight faults with the spider logo not aligning properly and the element used for the head having a noticeable scratch on one of the eyes. 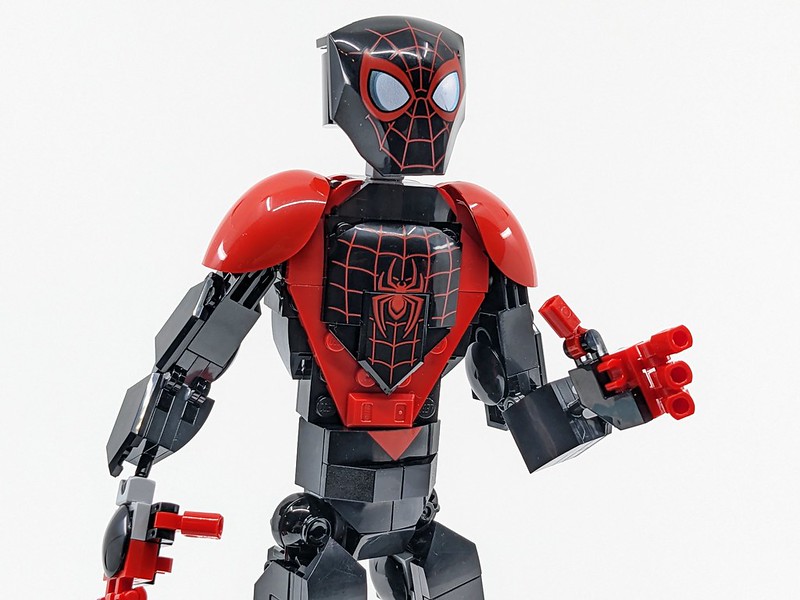 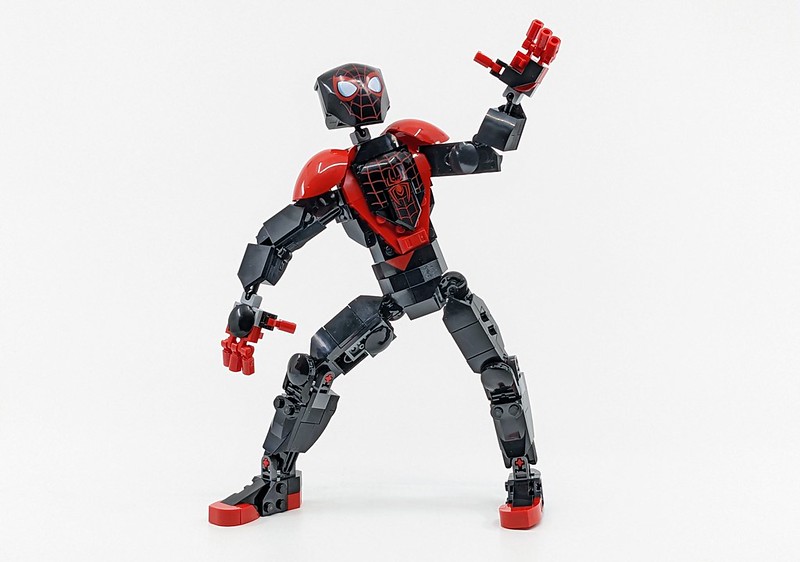 Miles has unique electric powers, which are represented by the use of transparent blue web pieces. These come in their own little bag, not every piece is used so expect to have a few left over. They connect to a clip on the palm of each hand. 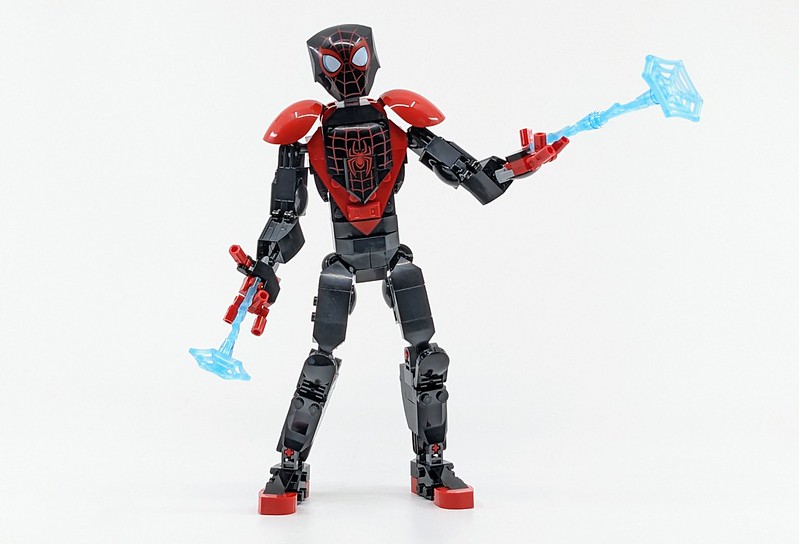 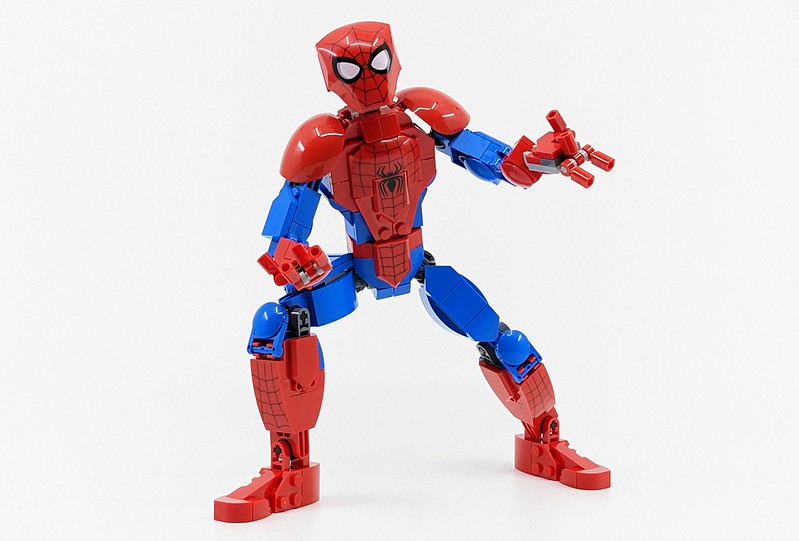 Spider-Man webbed his way into the Marvel universe 60 years ago and has become of the most popular comic book characters of all time. The very first Spider-Man movies helped to thrush the superhero culture into the mainstream and without the success of those early films, the MCU as we know it, wouldn’t exist. More recently, Spider-Man has played a key role in Disney’s Marvel films thanks to a unique partnership with Sony. He’s starred in a popular PlayStation game and also swings about the Avengers Campus at various Disney Parks. 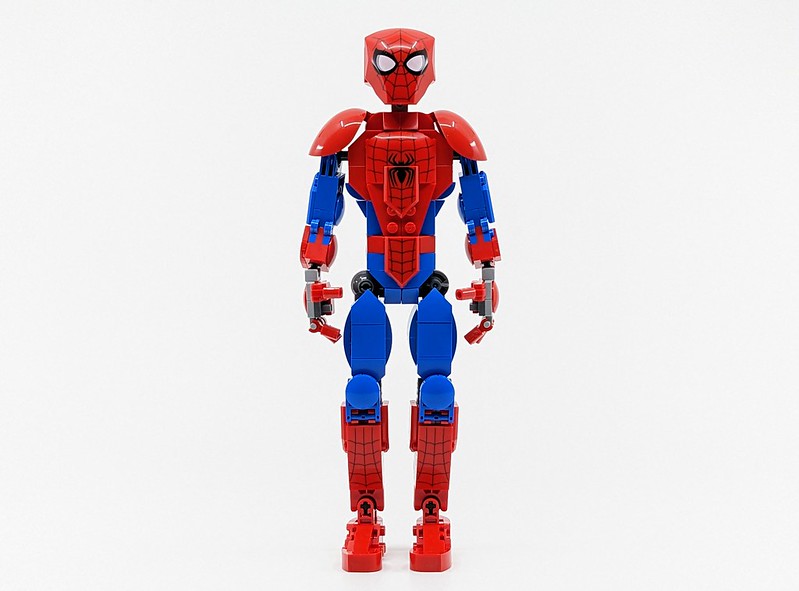 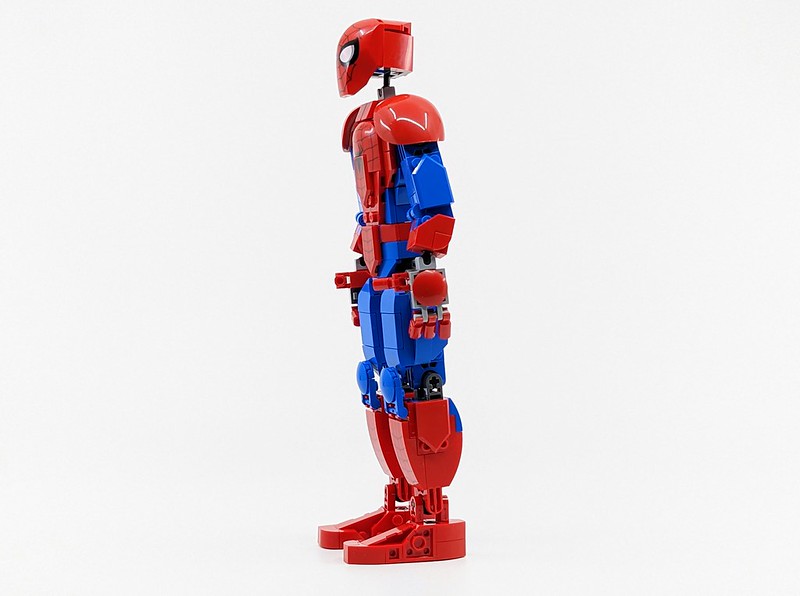 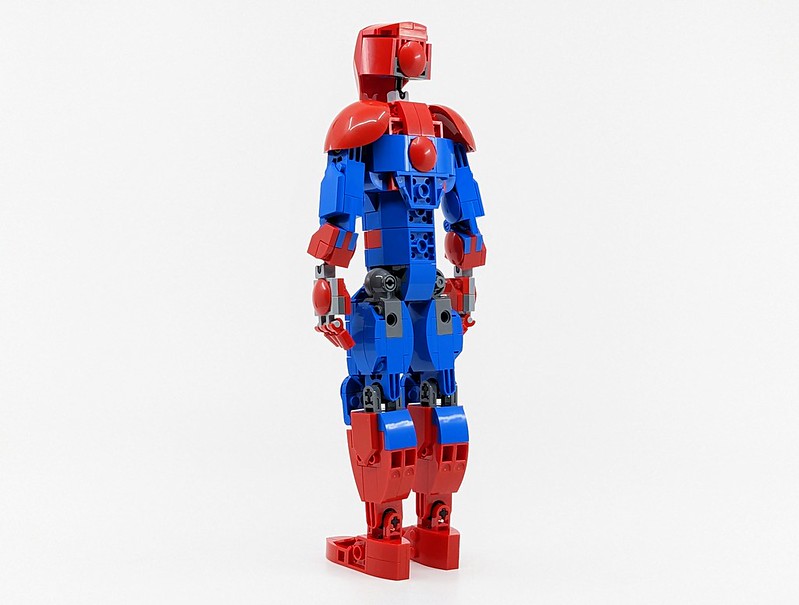 In the world of LEGO, Spider-Man actually pre-dates the Marvel Super Heroes theme, after appearing in a number of the LEGO Studios sets. Since then, Spider-Man has regularly featured in Marvel sets. Just like Miles, the format of the buildable figure is perfectly suited to the character of Spider-Man. The high level of movement offered by the various points of articulation allows for the figure to be posed in various ways. Although the nature of LEGO bricks does mean there are some limitations. I found this to be more so the case with Spider-Man compared to Miles. 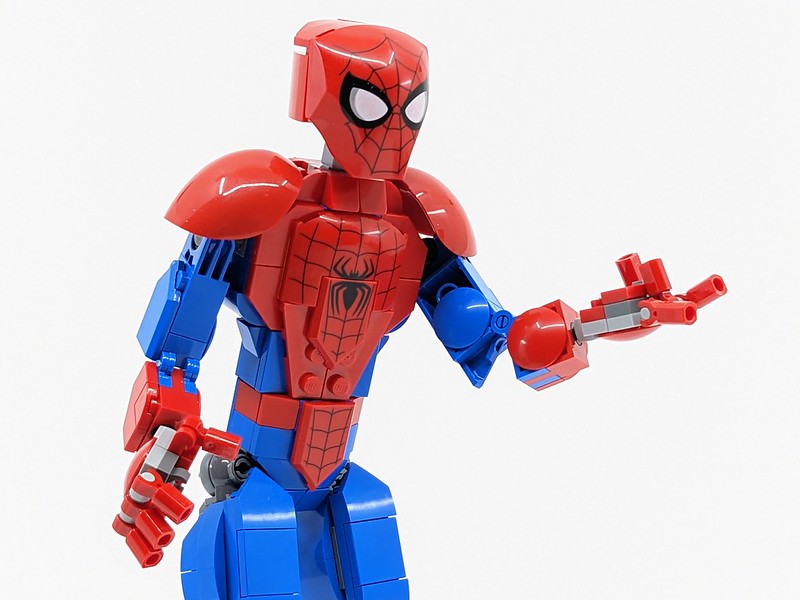 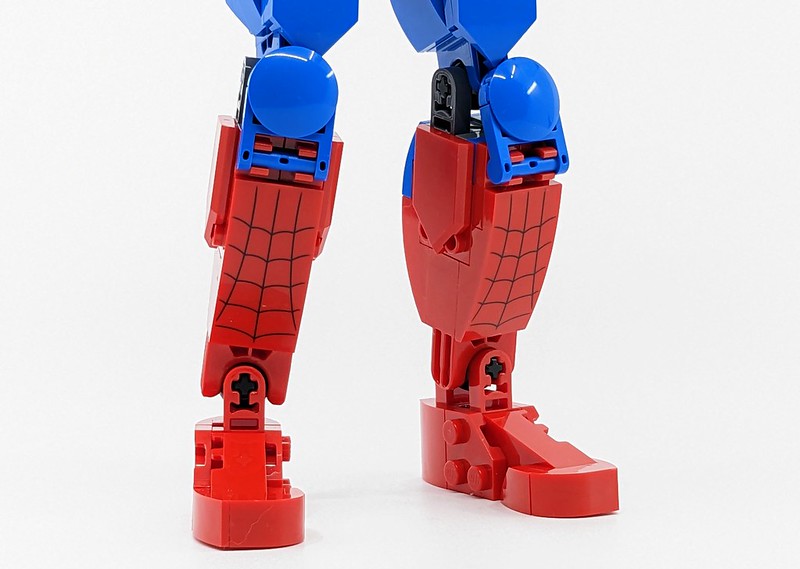 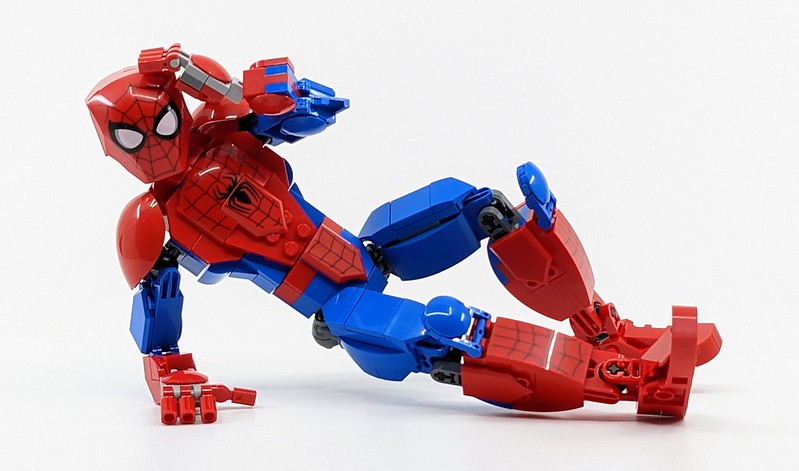 Spider-Man also uses a few extra printed pieces, with elements on the chest featuring the web pattern and the spider logo, along with two sloped plates on the legs also carrying the web patterning. There’s also an extra printed NEXO plate near the waist area. Spidey’s trademark web-shooting abilities are represented by various white web elements. These can clip into the hands and thanks to the individual fingers, you can just about recreate the iconic web-firing hand pose. 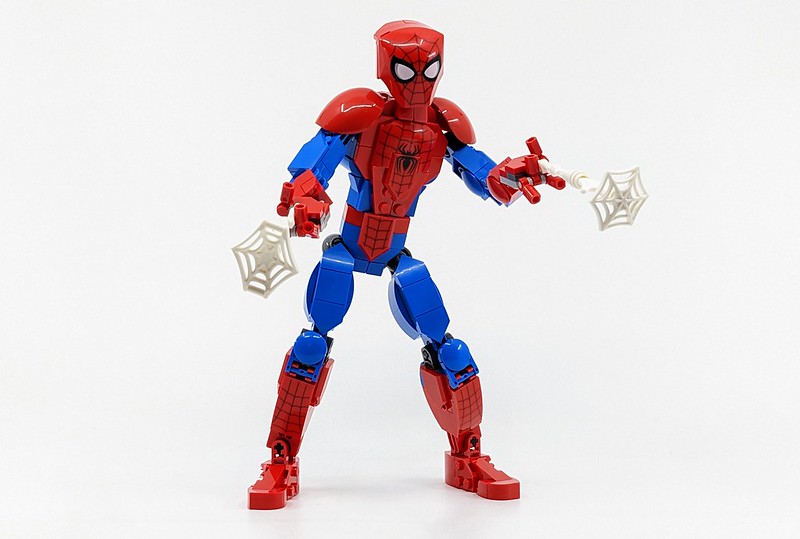