This month a selection of newly designed LEGO® Minifigure packs were released. One of which is features a selection of NINJAGO characters including the return of a LEGO legend. The pack is simply called ‘MF Set – NINJAGO 2019’ and features four Minifigures and a buildable bit of scenery, along with some weapon accessories. So let’s crack on with my review of the second new LEGO Minifigure Packs. 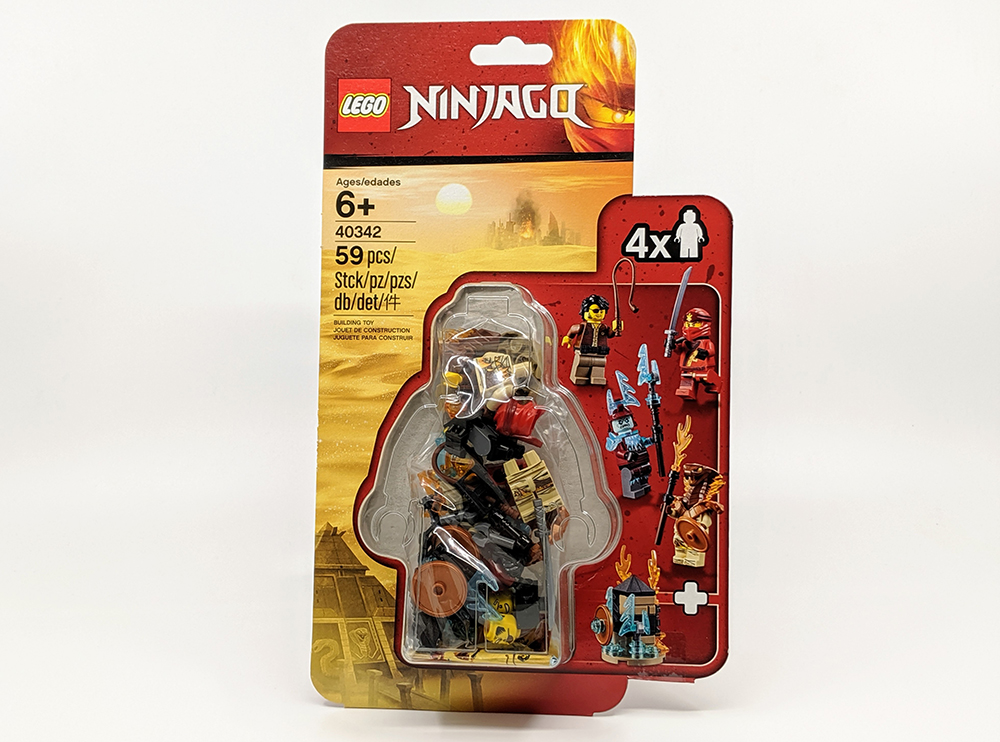 Although the focus of these pack are Minifigures, they are bulked out with a random bit of buildable sceney. In this pack that’s a weapons rack. This features both the weapons of the fiery Pyro Vipers Army and the icy Blizzard Samurai. 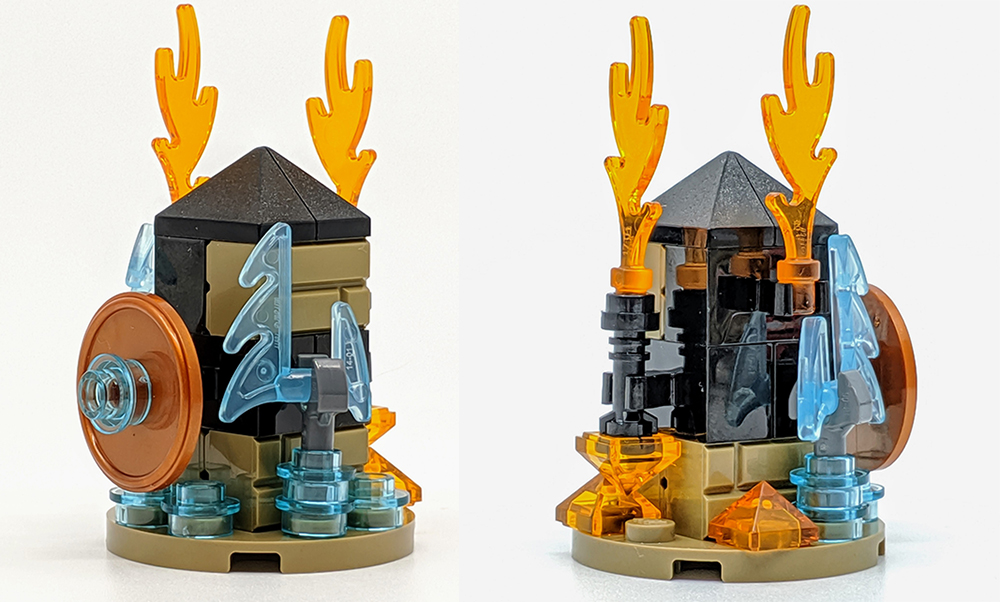 There are four Minifigures included in the pack including one exclusive, who can only be found in this set. There are all based on the upcoming 11th season of the hit animated show, NINJAGO: Masters of Spinjitzu. There are two good guys – Kai and Clutch Powers, along with two bad folks – a Pyro Destroyer and a Blizzard Archer.

Kai is featured in his Legacy outfit, which uses the new style ninja hood element. The print detail on his torso is great, with a gold dragon emblazoned on the front and back. He is joined by Clutch Powers, whose name may sound familiar. That’s because he was the star of one of the first animated LEGO movies, The Adventures of Clutch Powers. This was released in 2010 and his appearance in this pack, marks his first appearance as a physical Minifigure. He’s outfit is similar to what he appeared in the movie, but he’s now sporting an eyepatch. 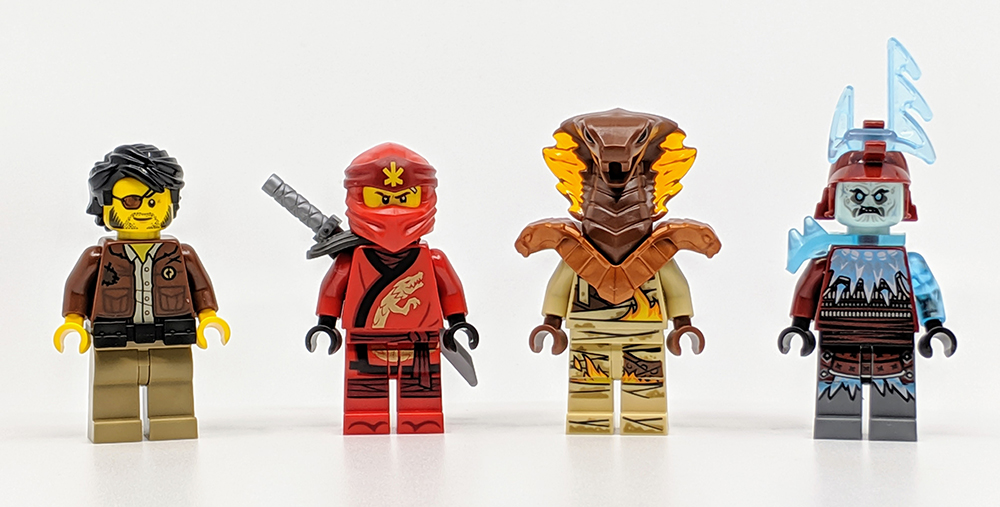 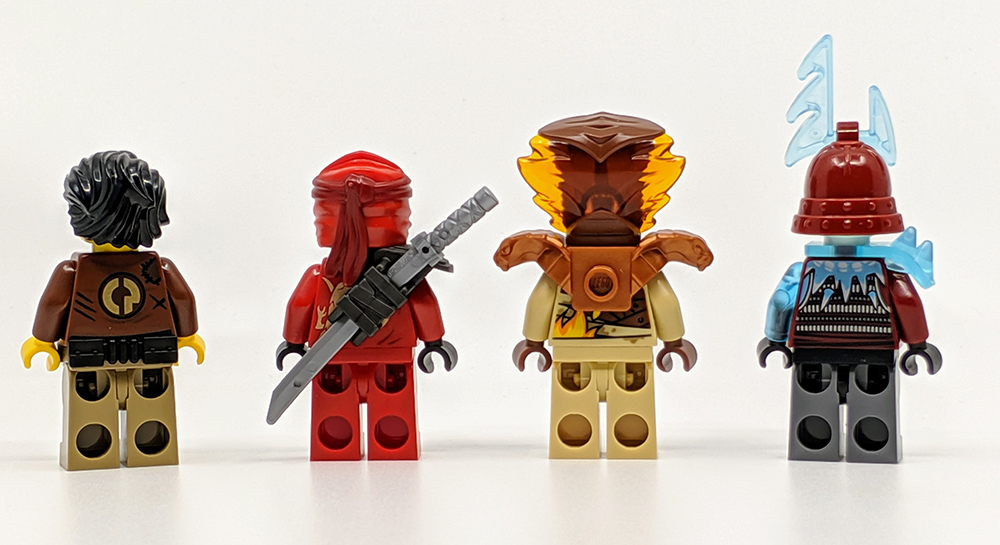 To represent the evil forces, the set includes two bad guys from the new season of the show. These are generic warriors from the Pyro Vipers, who are am ancient snake like race who gain their power from Kai. The Minifigure is a standard body with a new shoulder element, upon which a special snake-headed element is connected. These is quite cool as it’s a dual-moulded element, with transparent flame scales. The Blizzard Samurai are also new foes for season 11, these are icy based characters, who also combine transparent pieces. The Blizzard Warrior has a cool transparent arm, similar to the one featured on JEK-14 from the Star Wars theme. All three standard Minifigures have alternate faces and all four come with weapons including a whip, katana, flame touch and ice spear.

The Minifigure packs are a great ideas to bulk out your collections and add further play options to other LEGO NINJAGO sets. I quite like the two bad guy characters, plus in a low cost set like this you get to check out the new elements, without having to shell out on a larger set. But there is no doubt that Clutch Powers is the Minifigures most people will be buying this set for. Even those who aren’t a fan of NINJAGO, could be tempted to pick the pack up just to add this legendary character to the collection.