One of the most interesting LEGO titles released by DK Books this year was The LEGO Batman Movie: The Making of the Movie. This took an in-depth behind the scenes look at how LEGO Batman’s first solo adventure evolved from concept to big screen. One of its biggest draws were the numerous pieces of concept artwork and prototype LEGO models, which little did we know would actually offer us a look at future LEGO sets and characters. Hopes were high for the next Making of the Movie title which takes a look at the latest LEGO movie to hit cinemas. Our friends at DK Books have kindly sent over a copy of The LEGO NINJAGO Movie: The Making of the Movie book for us to take a look at, so this is our latest book review. 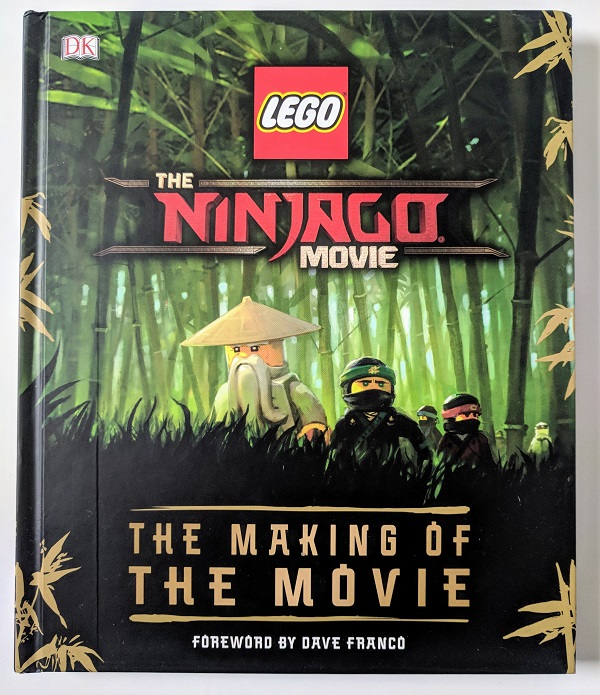 Packed with stunning concept art, sketches, artwork, inspiration and LEGO® builds, the book tells the fascinating story of how The LEGO NINJAGO MOVIE was made.

Find out how your favourite heroes, villains, vehicles and locations were created for the movie. Learn about each development stage of the movie, from the initial idea and storyboarding to recording the dialogue and special effects. Created in full collaboration with the LEGO Group, with exclusive insights from the filmmakers, animators and LEGO designers. A lot of work goes into making a movie and it’s no different for animated movies such as The LEGO NINJAGO Movie. In fact the LEGO movies have an extra layer of effort has many of the digital LEGO models you seen on screen have to be made with real LEGO bricks. LEGO Designers spend a couple of days taking part in a build sort of ‘build jam’ session where they grab some bricks and build various LEGO models which are later refined to become part of the movie and LEGO sets. 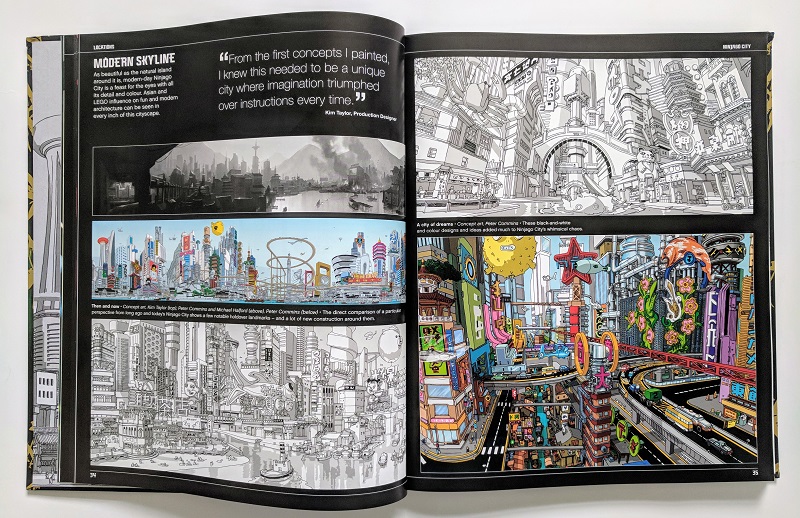 All of this process is covered in detail in The Making of the Movie book. It’s split into three main chapters – Locations, Characters and Vehicles. Despite the varied subject matter of these, they all offer the same sort of concept artwork, animation processes and how these helped to build what is seen in the final movie. Those chapters are preceded by a Timeline, which charts the movies creation from the original animated TV show which inspired it right through all the processes in between. Including scripting, character design and even real world location research. Something you not expect to see if you’ve watched The LEGO Movie or The LEGO Batman Movie. These both took place in a completely brick-built world. For The LEGO NINJAGO Movie, way more ‘real’ elements were added and to achieve this the design team, heavily researched micro plants and even took minifigures into the great outdoors to see how they would look in this unique new environment. All of which is covered across this first section of the book. 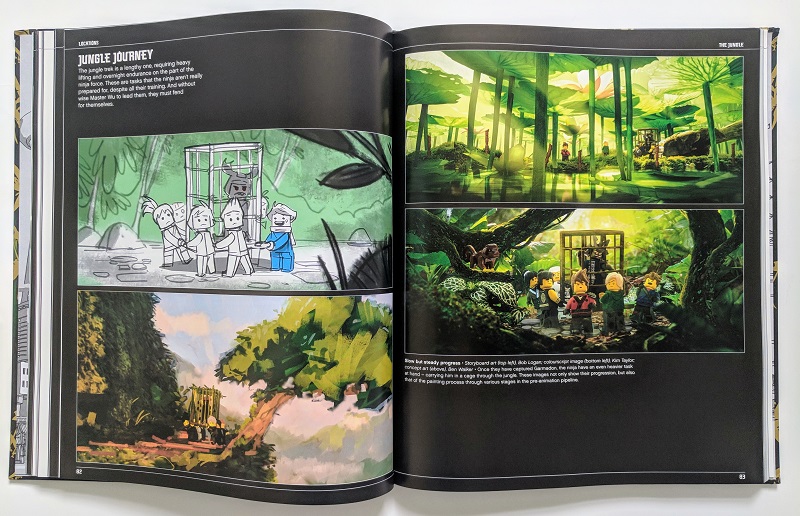 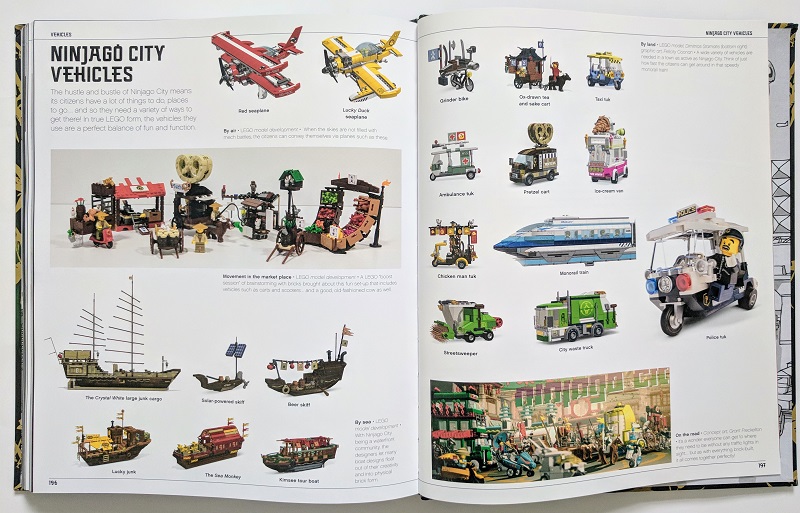 Despite these natural elements being used more in The LEGO NINJAGO Movie, there is still a lot of LEGO on screen. As mentioned above this must all adhere to the 60 year system which means bricks created in the late 50’s can still be combined with elements produced today as well as fitting them together in ‘legal’ LEGO ways. Animal Logic have gone to great lengths to ensure these digital models could be recreated in real life, even if you’d need a heck of a lot of bricks to do it. Seeing how elements of the movie move from concept sketches to LEGO builds and then the movie, is genuinely impressive and covered in great details across the book. 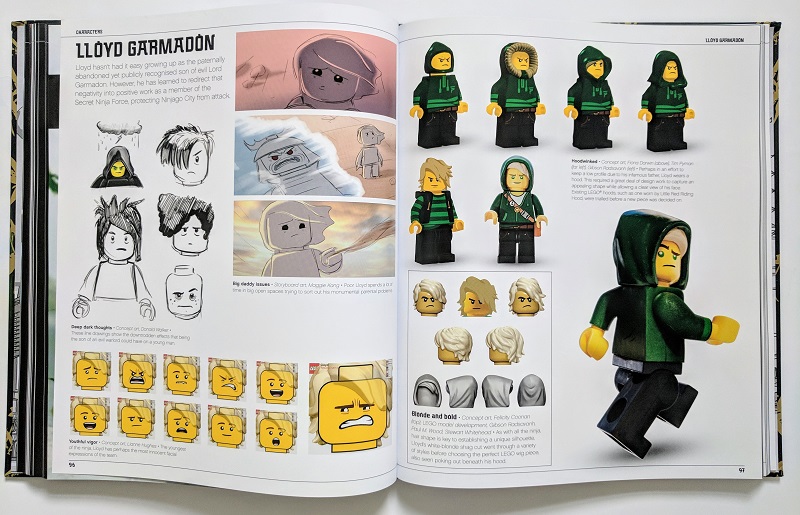 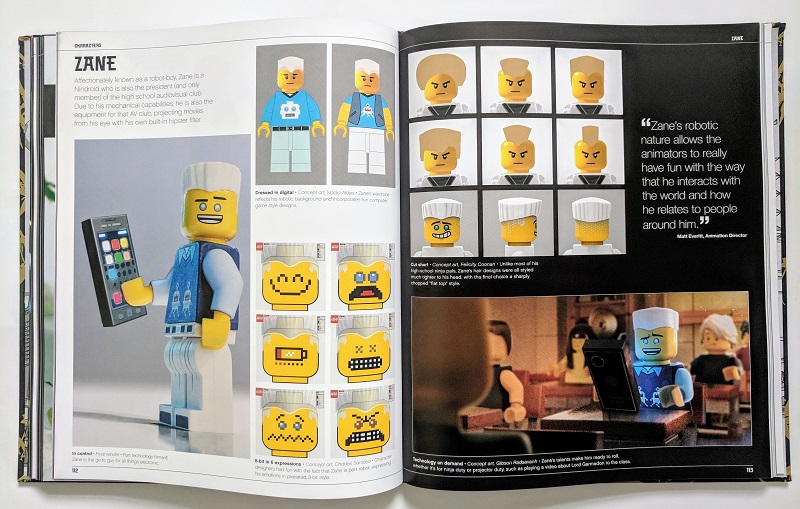 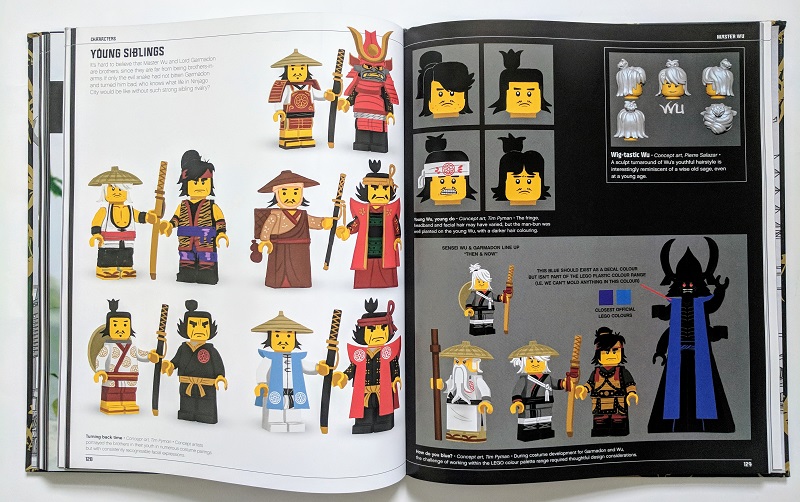 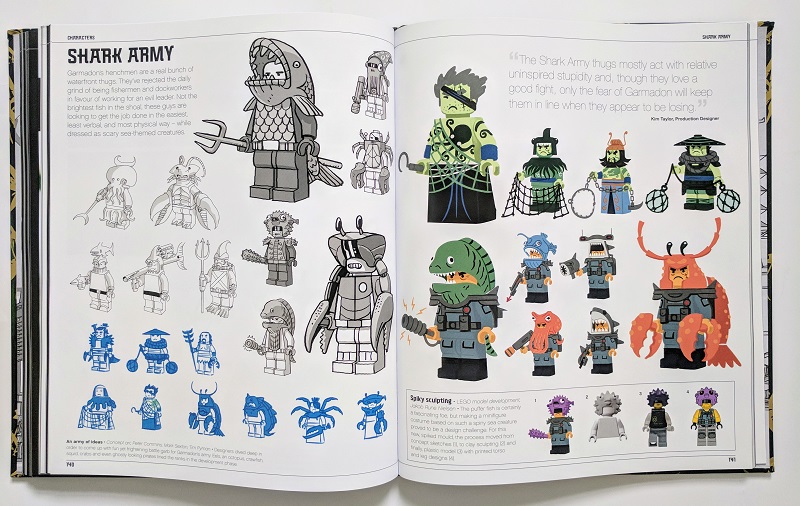 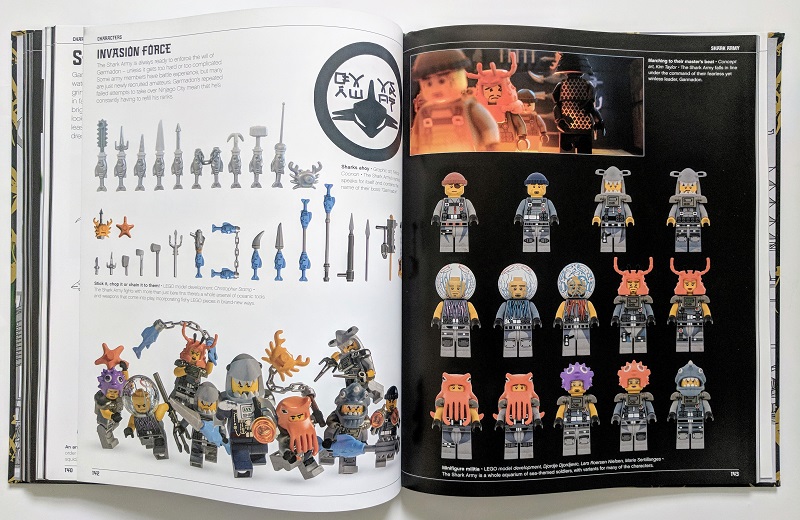 With NINJAGO already being an established world with a rabid fanbase, translating well-known characters into a new world, went through many iterations before they settled on what we see in LEGO sets and the final movie. The book takes a close look at each of the main characters and their vehicles. Showing their various design concepts and ultimately abandoned versions. Unlike the LEGO Batman Movie edition of this books, it doesn’t offer any sneaky peeks at up coming LEGO releases but it’s interesting to see how some characters evolved in the design process. 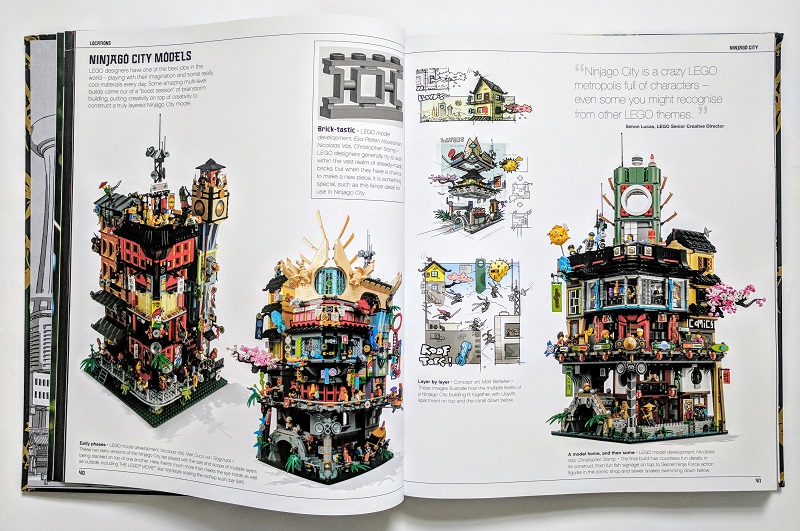 Although their are no set reveals the books does offer a look at some of the physical LEGO concept models which have become retail sets. Seeing how sets like NINJAGO City or the Temple of the Ultimate, Ultimate Weapon could of been are quite cool. Smart goes for some of the ninja mechs and vehicles, many of which have cool little micro version featured alongside the bigger builds. 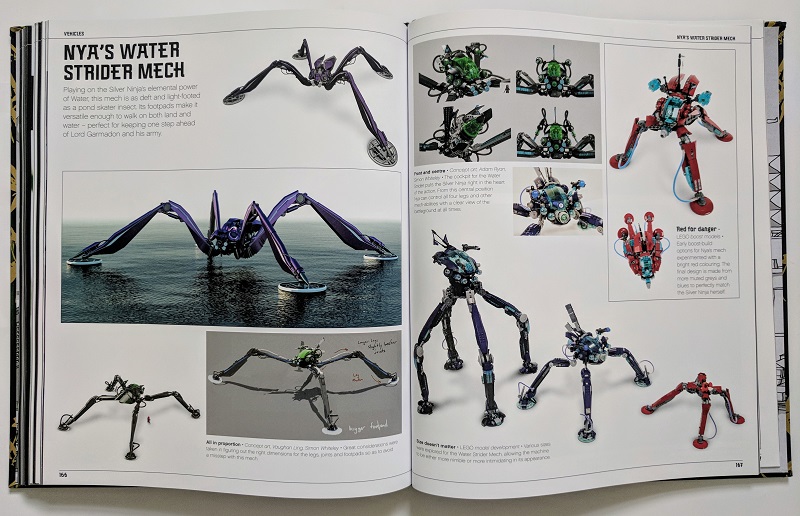 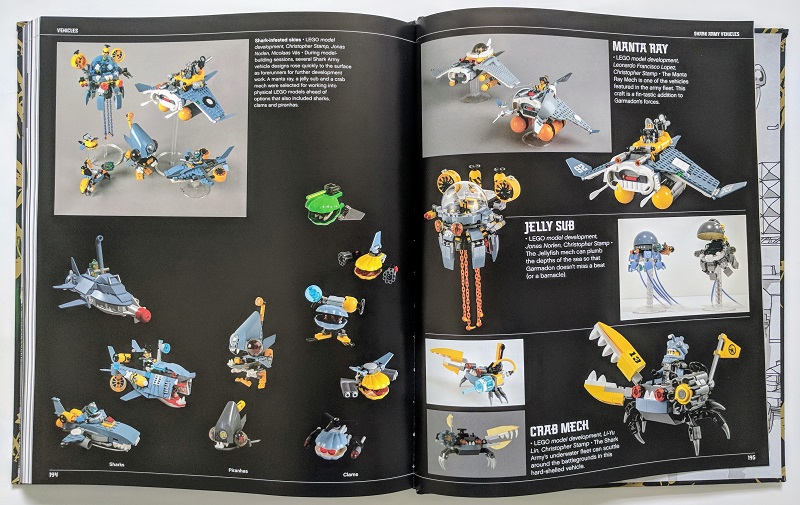 We always enjoy the behind the scenes snippets featured in some of DK Books other titles, so to have an entire book dedicated to is an interesting read. Something that both inspiring movie makers and LEGO Builders would both appreciate. It’s a little disappointing the book doesn’t offer the same level of future insight for upcoming sets, but they are a few pieces which could signify new sets coming in 2018. The book does offer plenty more concept artwork, some of which would make amazing prints. 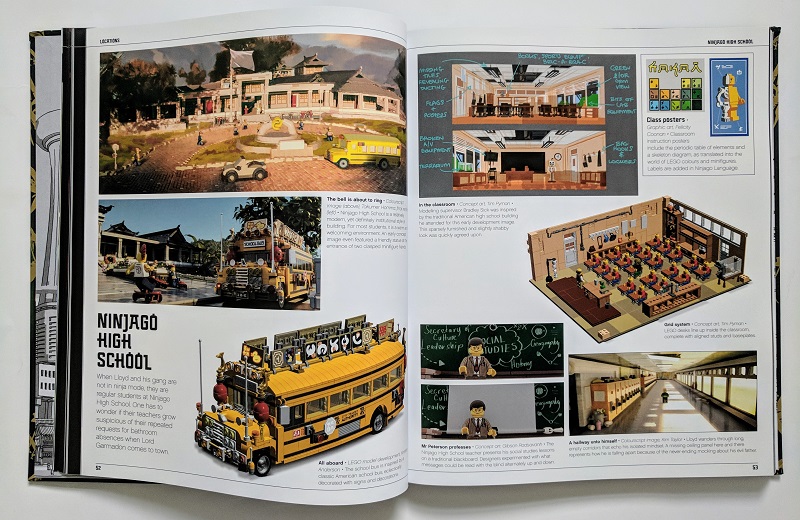 You may not have any intention in seeing the movie at the cinema or may you be a fan of the LEGO theme, which inspired it but we’d still recommend grabbing a copy of this book as it offers an interesting in-sights to the world of LEGO. The LEGO NINJAGO Movie: The Making of the Movie is available now from Amazon and all good book sellers.