The 12th season of NINJAGO: Masters of Spinjitzu will see the ninja enter the digital realm of an ancient arcade game called Prime Empire. To enter this digi-realm they must pass through Arcade Portals, which have inspired a new range of collectible sets. Since its inception, the LEGO® NINJAGO theme has featured collectible sets. But these new Arcade Pods must be the best yet. Each set includes a new Arcade cabinet, along with two Minifigures – a Digi-ninja and an Avatar. There are currently three sets available featuring Kai, Lloyd and Jay. As each set is fairly similar, it makes sense to combine them all into one review. So get your quarters at the ready and head to the arcade, as I take a look at the LEGO NINJAGO Avatar – Arcade Pods. 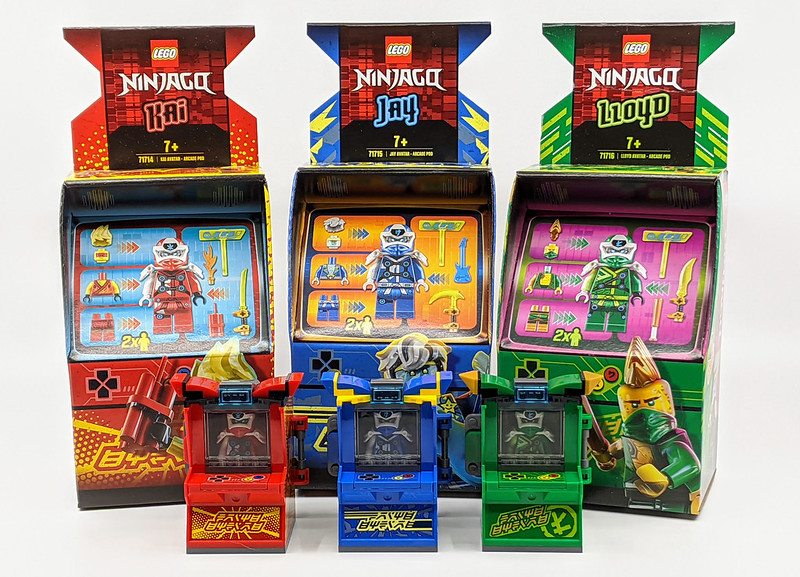 The gateway to the exciting new video game world of Prime Empire is through this awesome arcade machine. NINJAGO® fans will adore creating stories with this arcade toy and 2 video game figures. The best ninja toys! This NINJAGO set offers kids the chance to choose their own ninja avatar, the character they wish to be in Prime Empire, providing a fun opportunity to be creative with stickers and accessories. The back of the arcade toy opens for kids to store their ninja action figures, and weapons. This is a cool ninja build NINJAGO fans will cherish! The perfect ninja toys for kids LEGO® ninja playsets give children the chance to enter a thrilling world where they can indulge in independent play or fun with friends as the team of ninjas take on the forces of evil. Kids will be enthralled with these ninja toys, including cars, jets, dragons, buildable figures and more.

Like a number sets released this year, the basis of the LEGO NINJAGO Arcade Pods are to provide an enclosed playset. This is achieved with a new element, which unsurprisingly is the shape of a classic arcade cabinet. The actual cabinet is comprised of two elements, a single box like piece, which has an open back, bottom and top half of the front. The second element is a 4×6 recessed plate, this can be connected to the cabinet section.

Each cabinet is jazzed up with a trio of stickers, and one which is placed on a 2×4 flat tile. They also have a clear wall element, which becomes the screen and a handful of elements are added to the top section to give it a more extravagant look. This is the only real building the set features. As a gamer myself I have fond memories of pottering about arcades, so I really like the look of the Arcade Pods. So may complain about the use of a new and large single element to achieve the cabinet, but I don’t think it would look at good or offer the same ‘storage’ functions if it was constructed from existing pieces.

Each Pod includes a 6×6 plate, which acts as the base to the cabinet and also a platform to display the Minifigures. the Digi version of the included character stands on a raised platform of a couple of 2×3 plates and a 2×4 sloped brick. When placed within the cabinet, it can be seen through the screen. The Avatar Minifigure is displayed in bits, both on the base plate and in the back door of the cabinet. This is also used to store the various weapons and health bar. 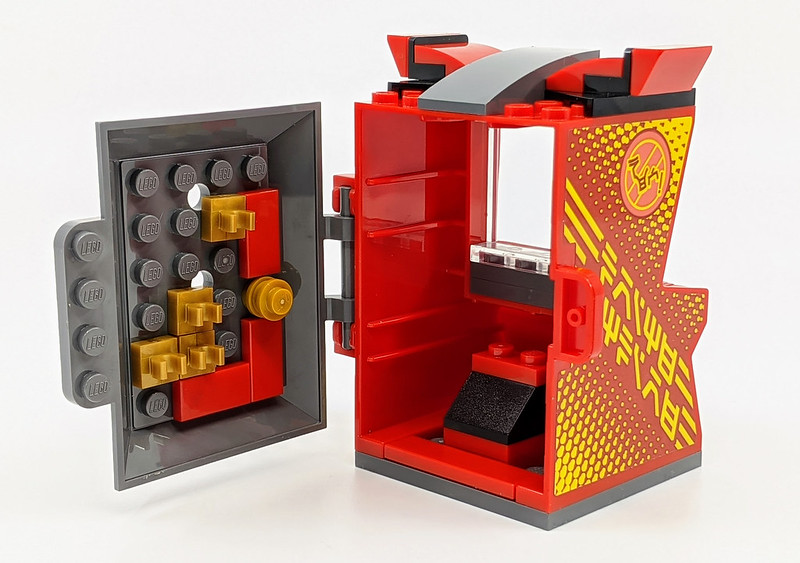 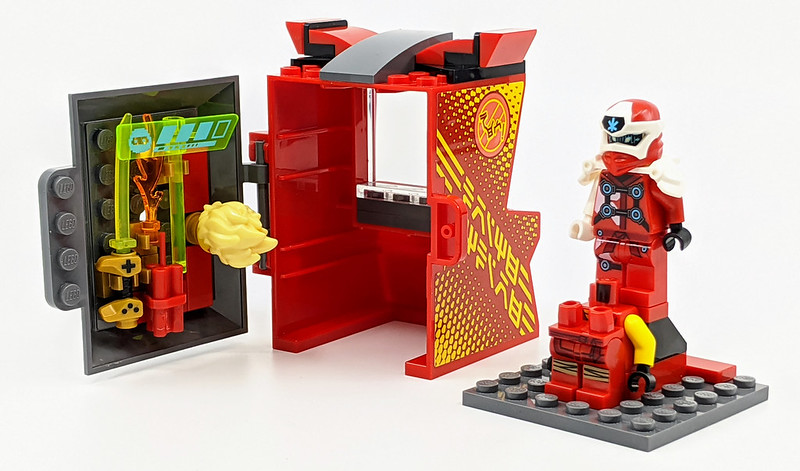 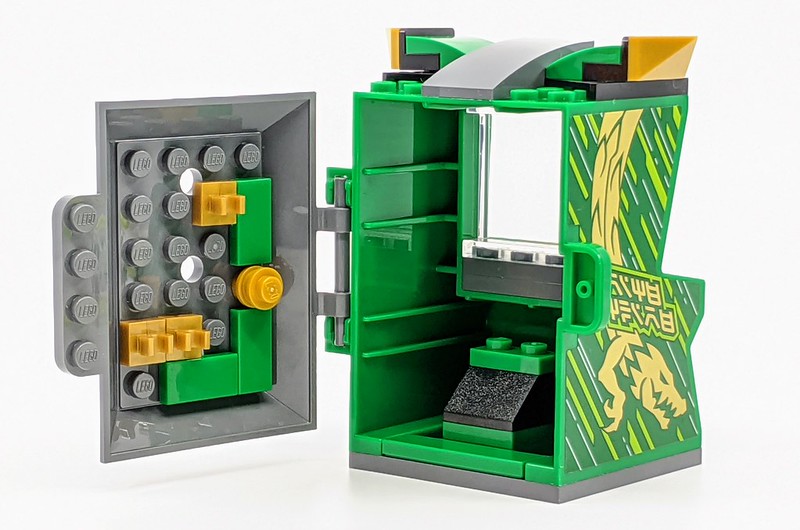 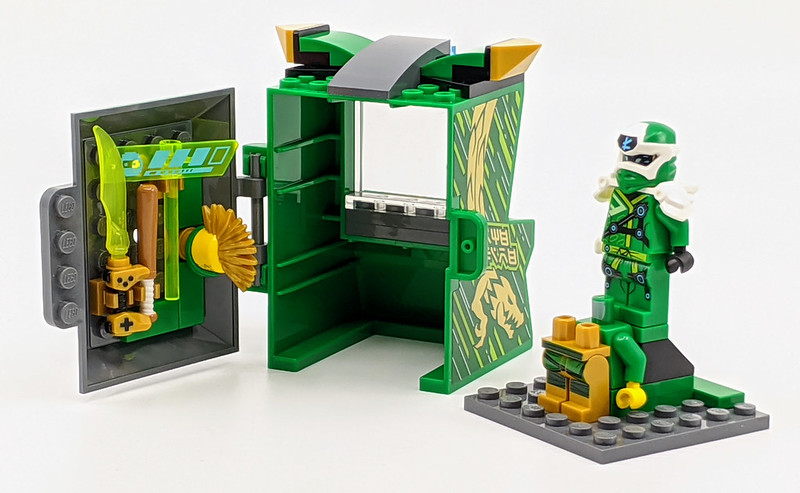 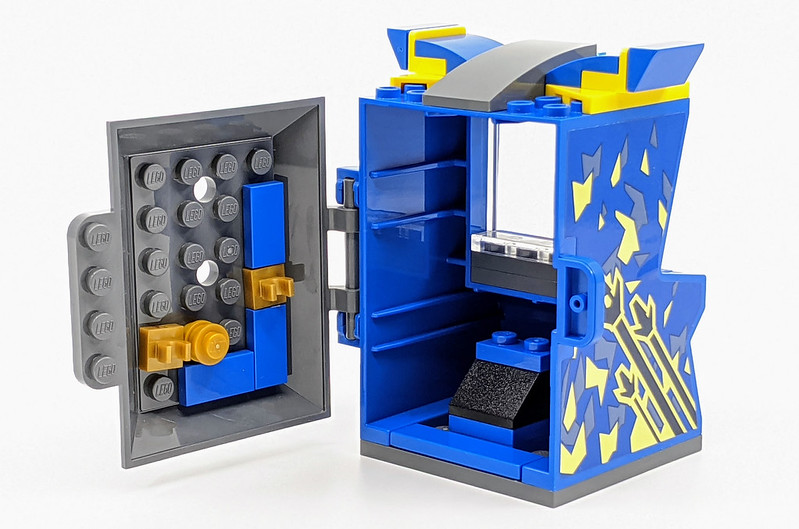 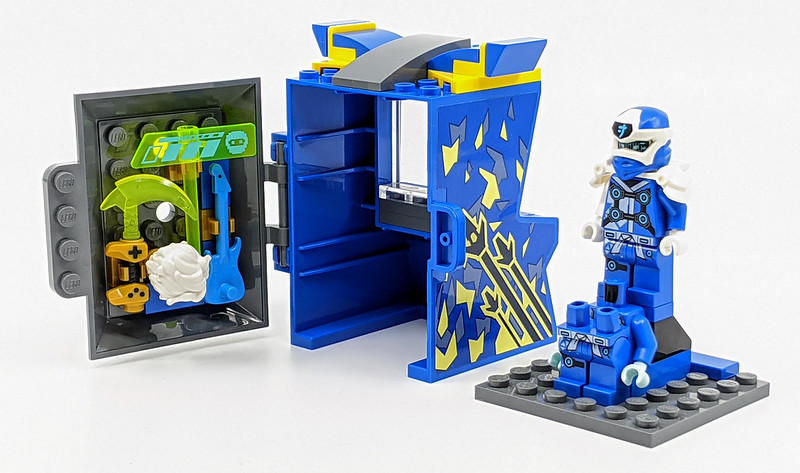 Although each Arcade Pod is identical in terms of build and the pieces used to create them, they are each different colours to match the ninja included with them. So these first ones have a green, red and blue outer shell. But their major differences are the Minifigures….

For a long time the ninja character from NINJAGO have be clothed in the same outfits. It wasn’t until The LEGO NINJAGO Movie, did their look alter a little. Since then the ninja have had different outfits and hoods with most new wave. The Digi-ninja have a new hood, unlike some of the most recent ones, these return to the single piece hood. Each ninja Minifigure also has a new shoulder armour element. This has space for two swords to be stored in it but more importantly it also holds the new health bar. This comprises of a fluorescent green rod and a new printed element. When connected to the armour piece, it gives the impression of the health bar floating over the Minifigure’s head, as it would in a game. The Digi-ninja also have a new weapon, which is a golden joystick hilt, which can carry various fluorescent weapon attachments. This is a great little element. 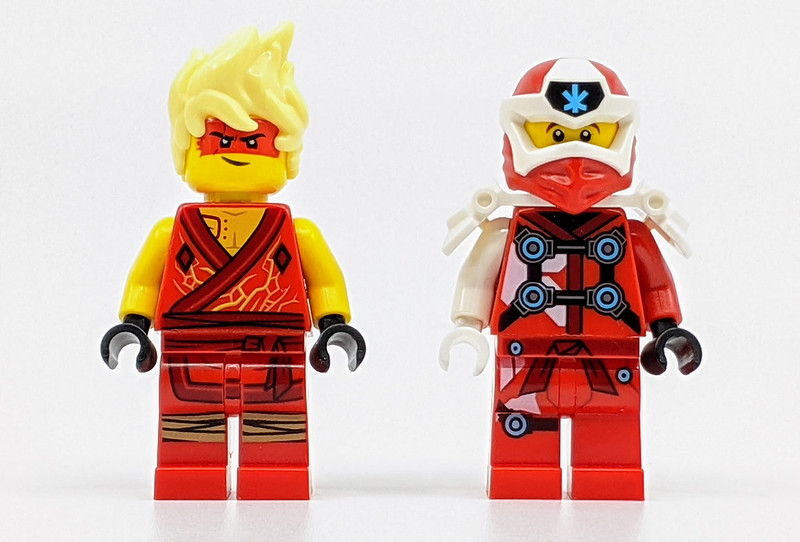 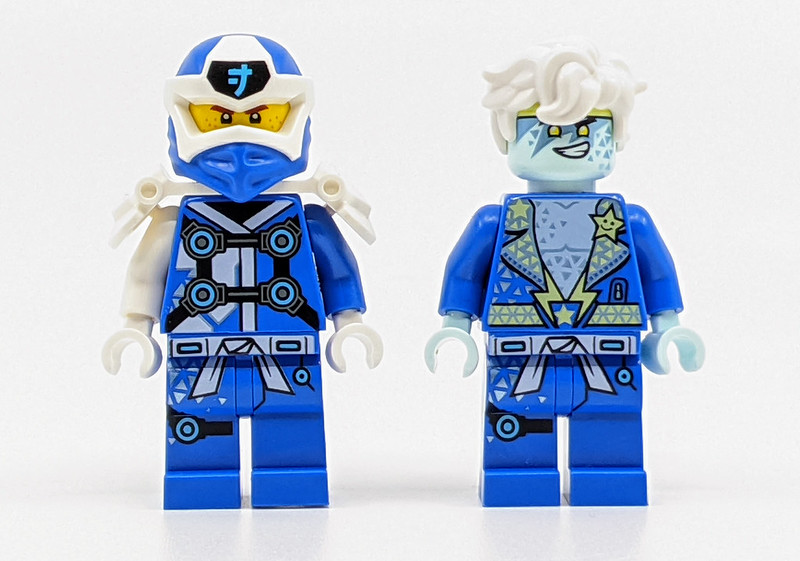 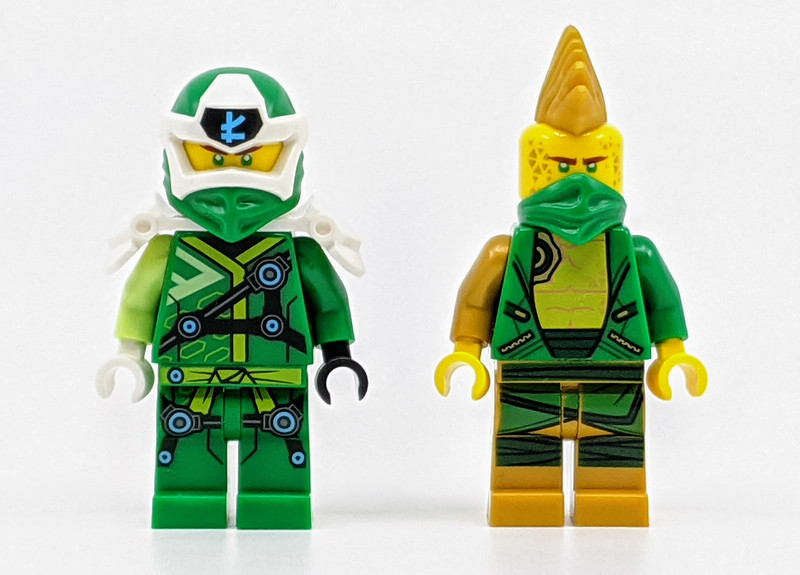 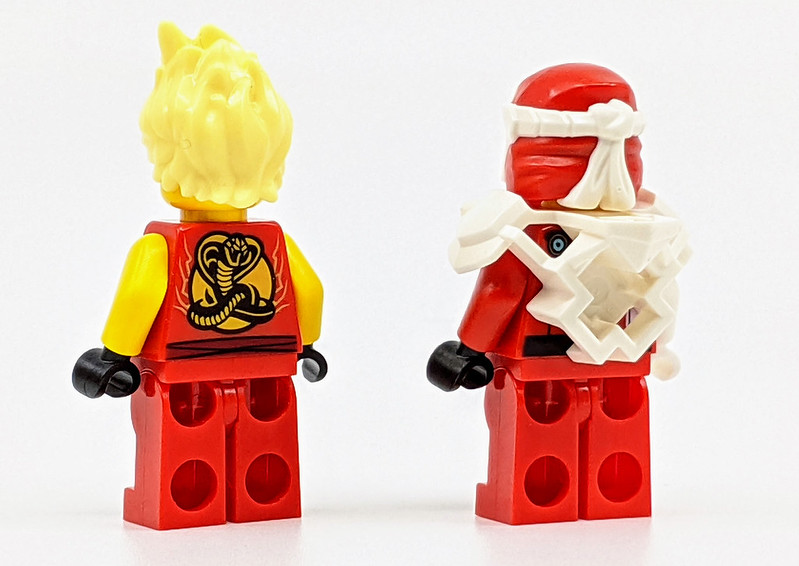 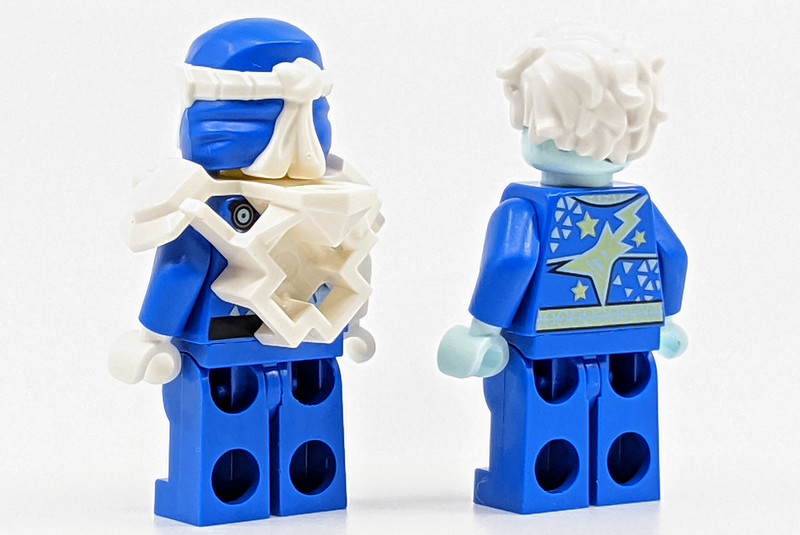 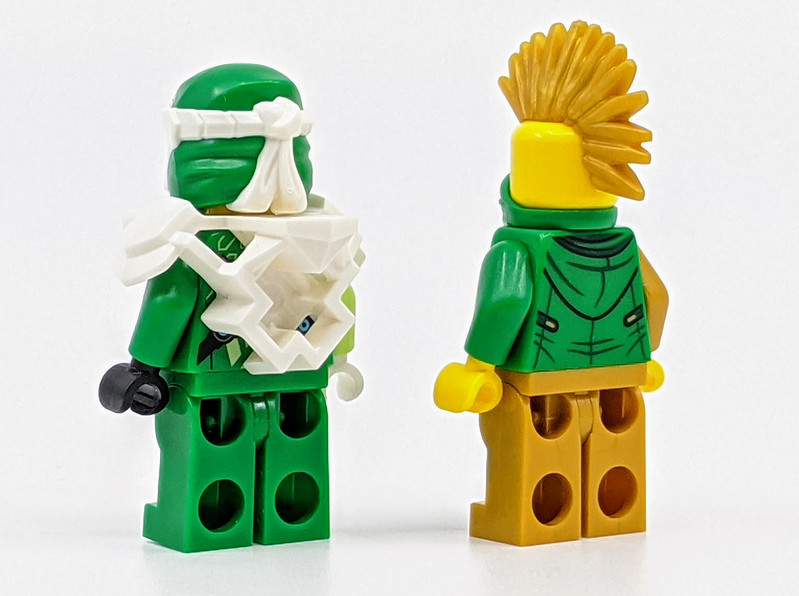 In the world of gaming an avatar is a digital representation of player, which can be used a their in-game character. Many people create a version of themselves when creating an avatar, which is exactly what the Masters of Spinjitzu have done. Their avatar variants have various traits of the character, including the same colour outfits and similar faces. Kai and Jay have the same hairstyle has their non-ninja selves, but they are in new and unique colours. The most extreme of the three is Lloyd who has traded in his golden locks for a mohawk. All three avatar ninja are showing off a little skin, unfortunately for Lloyd, the yellow print on a green background doesn’t work too well. In fact of the three avatars, Lloyd is my least favourite when compared to the other two character. Kai has an amazing snake symbol on the back of his kit and Jay has a star-clad rocker outfit. Each of the avatar also have their own unique weapons, Lloyd has a baseball bat, Jay has a guitar and Kai has a flame element and dynamite. 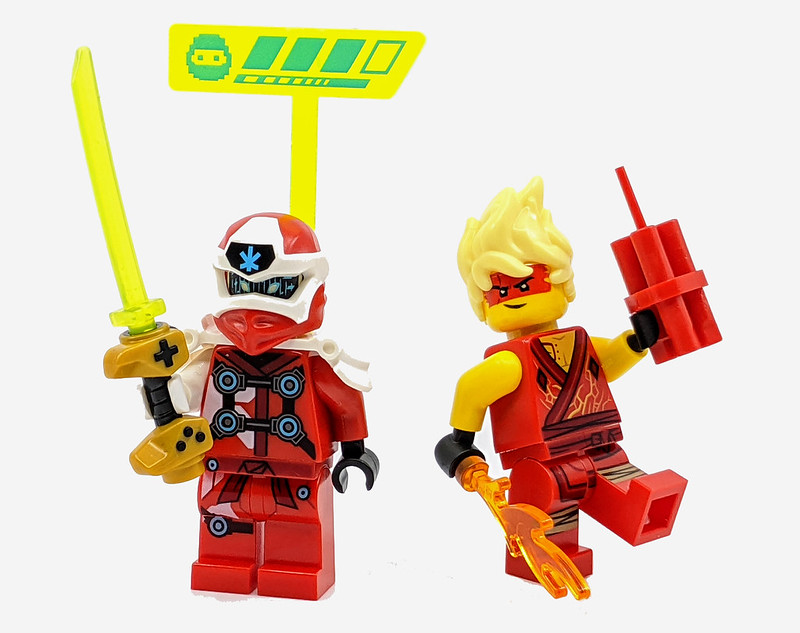 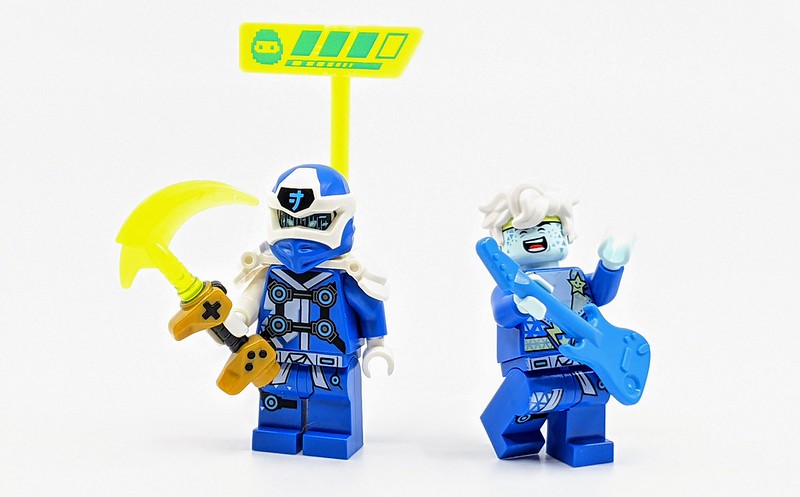 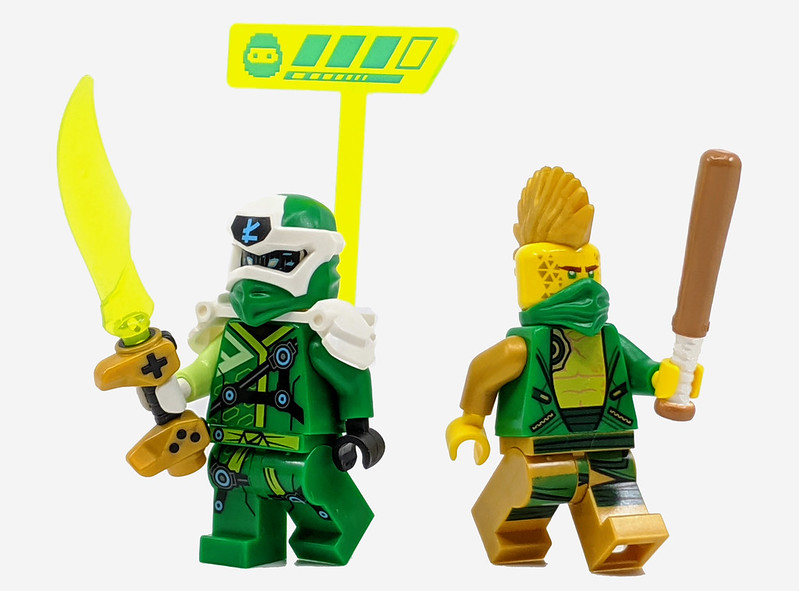 I’m certainly not a hardcore NINJAGO fan but I find myself being increasing impressed with how the theme reinvent itself, with each new season. As soon as I heard season 12 would have a gaming vibe to it, I was immediately interested, even more so when I heard there would be arcade cabinet. Now I’ve built them all I’m even more of a fan. Although they offer minimal building, I love the new arcade cabinet shell and how all the elements can be contained within it. Of course the main draw has to be the Minifigures. The Digi-ninja can be found in other sets, but their avatars are exclusive to the Arcade Pods. It’s nice to see smaller collectible sets like these are still part of the NINJAGO theme and can appear alongside larger. There are a handful of new elements introduced across the Arcade Pod sets, but they are so unique to the theme, I wouldn’t see them having much use elsewhere. I really hope the rest of the ninja get their own Arcade Pods. I understand Lloyd, Kai and more recently Jay, are the more popular characters, but this often leaves the rest of the gang out. I definitely recommend at least picking up one set, but expect to want the others. 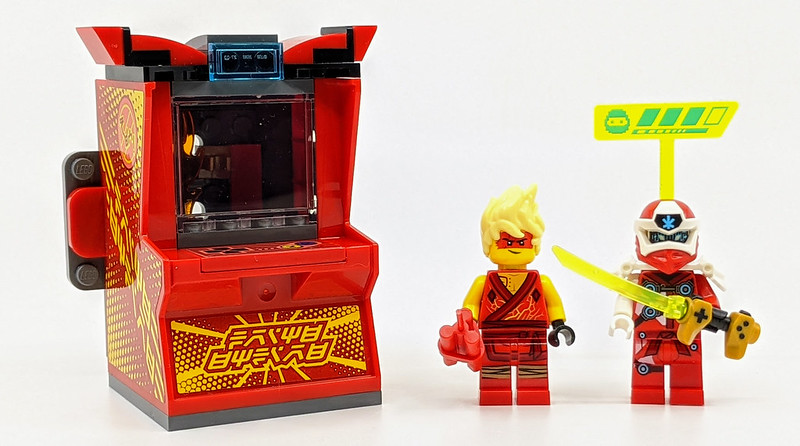 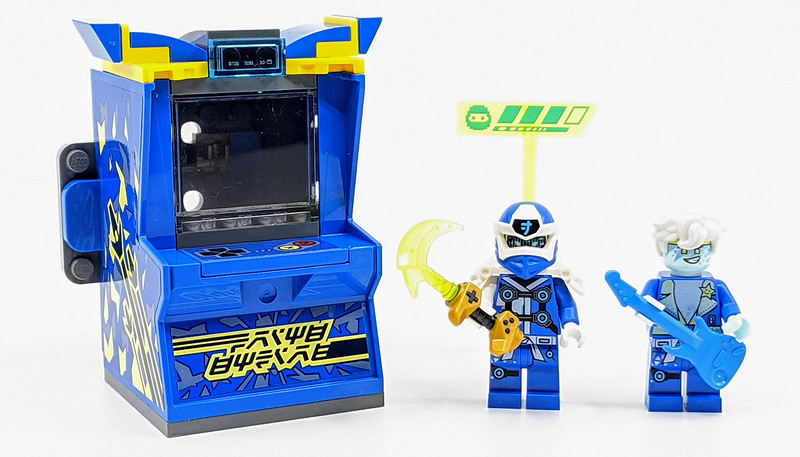 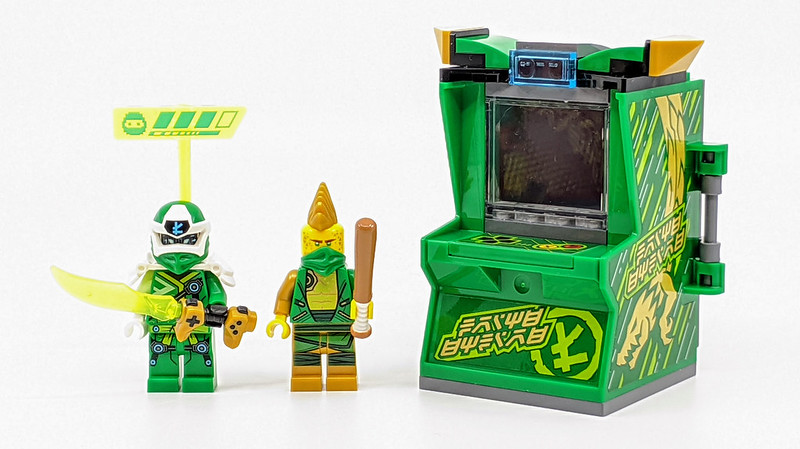