LEGO Modulars Once You Pop You Just Stop

Home » Creator » LEGO Modulars Once You Pop You Just Stop

Just before Christmas, I got to build my first ever LEGO® Creator Expert Modular set, as I reviewed this year’s latest addition to the popular line, the Bookshop. Before I was offered the Bookshop to review, I had planned a feature in which I built my first modular and I had chosen the Diner. The original plan was to do this ahead of the festive period but due to high season, the set only arrived a couple of weeks ago.

It’s certainly true what they say, once you pop you just can’t stop. This was always the reason I’ve stayed clear of the Modular range, I’ve admired them from afar when sharing press releases. Plus I have marveled at people’s collection of these sets as a basis of their ever-growing LEGO towns. But they take up a lot of space, especially when connected together. As I don’t have that much room free, displaying any LEGO set isn’t easy, so finding room for a new Modular every year is impossible. I also like collecting collections, so I knew one Modular would most certainly lead to another. So although it’s no longer my first modular set, there is no reason not to take a closer look at the set. 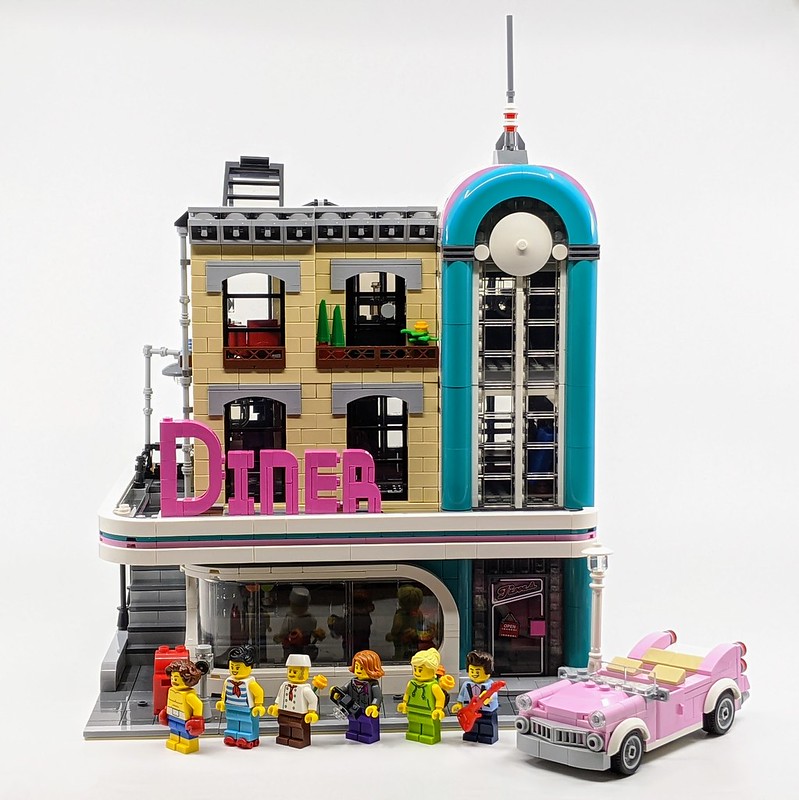 Drop-in at the LEGO® Creator Expert 10260 Downtown Diner, where you’ll discover a healthy portion of fun and surprises. This impressive model features removable building sections for easy access to the detailed interior, which comprises a ground-level 1950s-style diner with a large curved front window, red bar stools, jukebox, counter and an open-plan kitchen. The mid-level has a boxing gym with boxing ring, punching bag, and weight training room, while on the upper-level you’ll find a recording studio, complete with vocal booth, mixing desk and a refreshments cabinet. The facade of this modular building features pink-and-teal Streamline Moderne styling with a large ‘DINER’ sign. Other external features include arched windows, balconies and a staircase, plus a pink convertible car and a detailed sidewalk, complete with mailbox, parking meter, flowerpots and a streetlamp. This incredible collectible toy has been designed to provide a challenging and rewarding building experience with a touch of nostalgia and charm. Includes 6 minifigures. 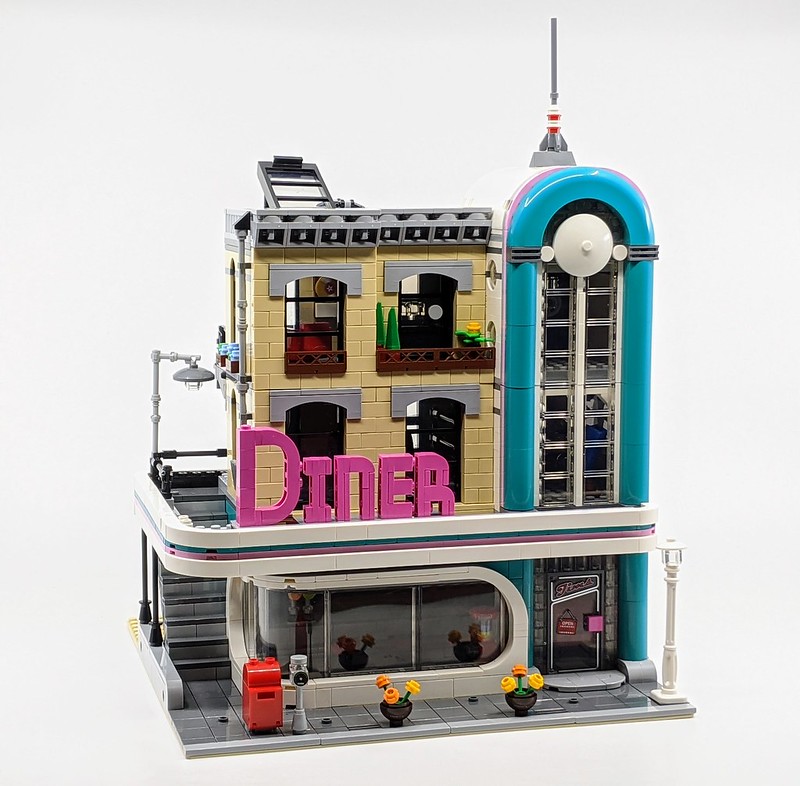 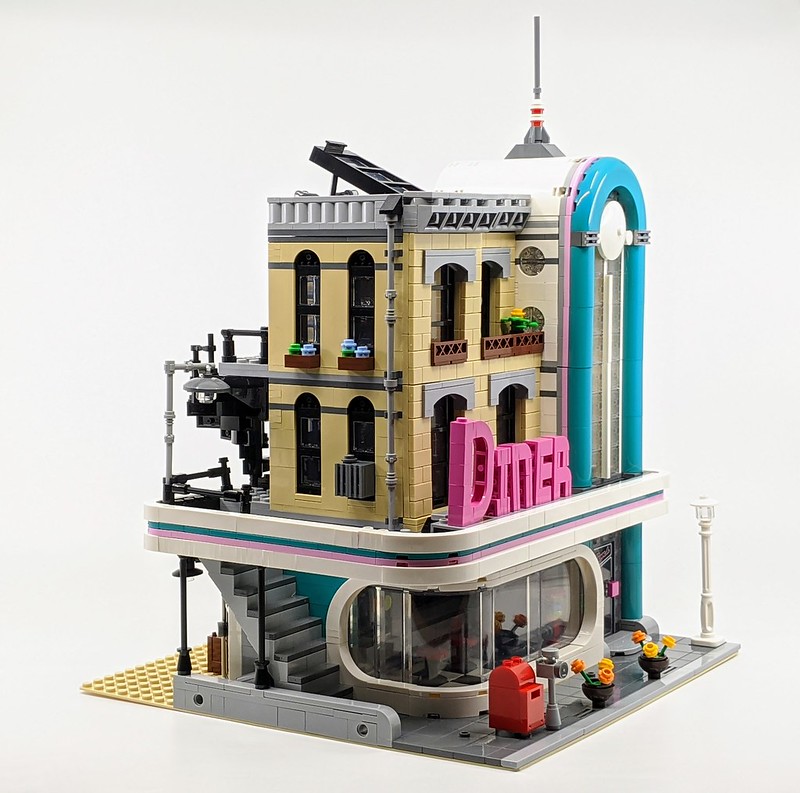 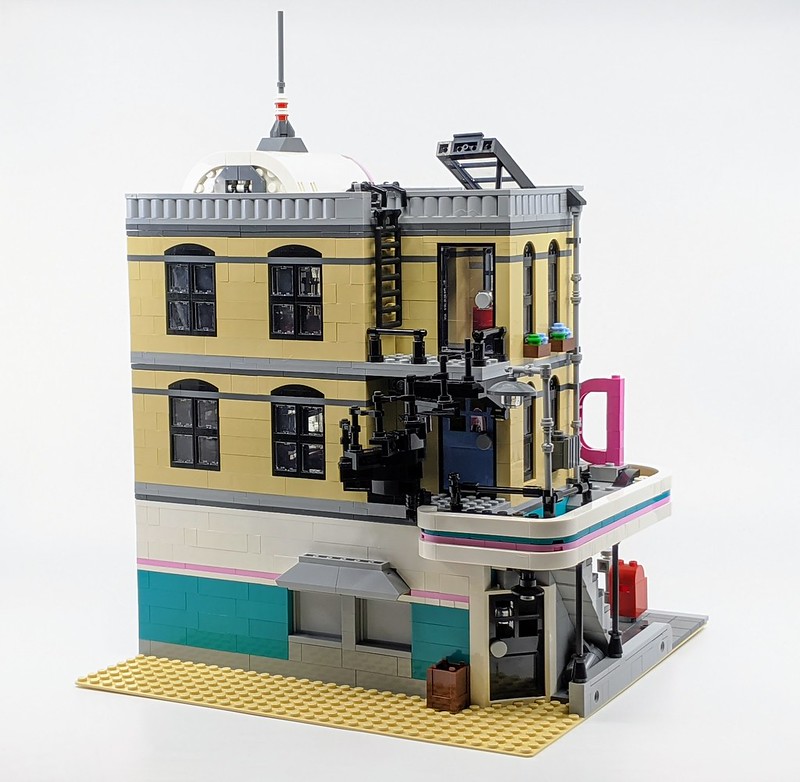 One of the key elements of the Modular Buildings is the level of detail they contain and the Downtown Diner certainly has a lot going on across its three floors. The ground floor diner is filled with the classic details you’d expect from a retro American eating joint. So there is an open plan kitchen, behind a sleek counter, a black and white tiled floor, and a retro jukebox to fill the diner with swinging tunes. The musical theme is continued with stars displayed on the walls. The retro diner look is also captured nicely outside, thanks to the huge curved window. One of the most eye-catching features of the ground floor is the huge pink ‘diner’ signage. This is brick-built and looks great against the muted colour of the upper floors brickwork. 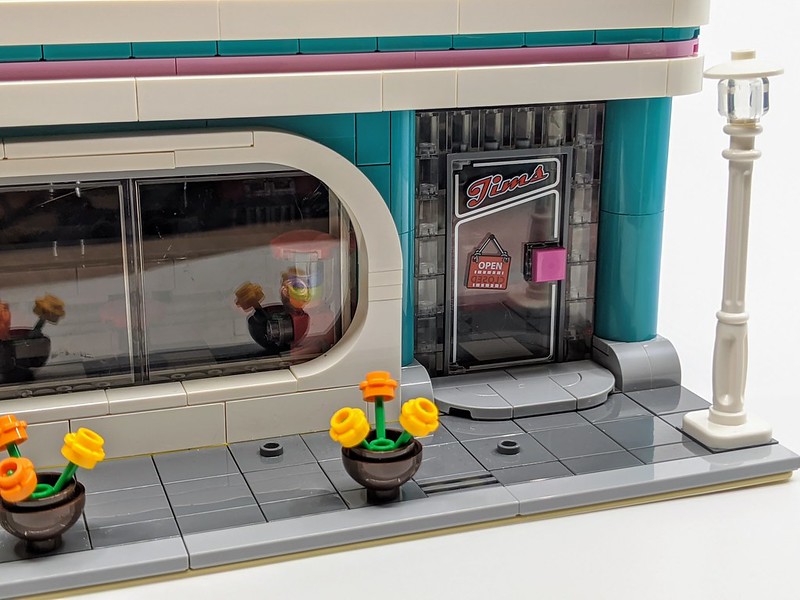 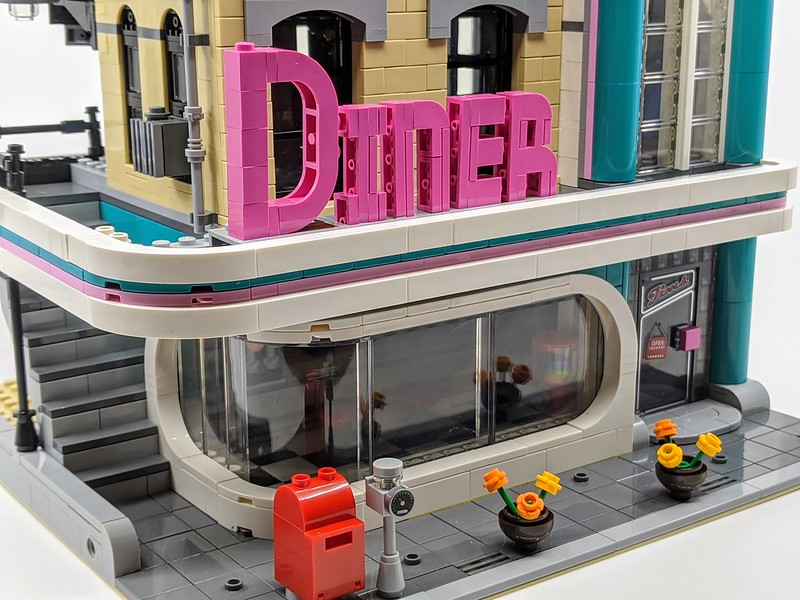 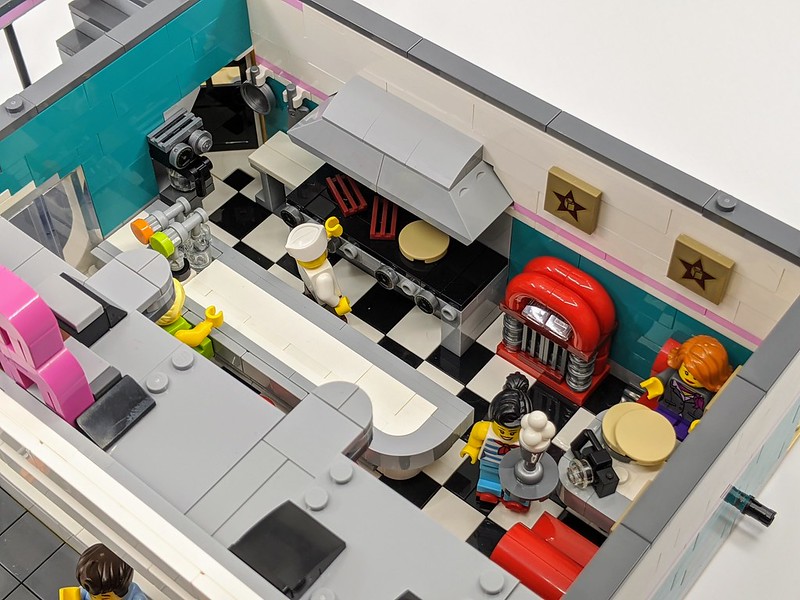 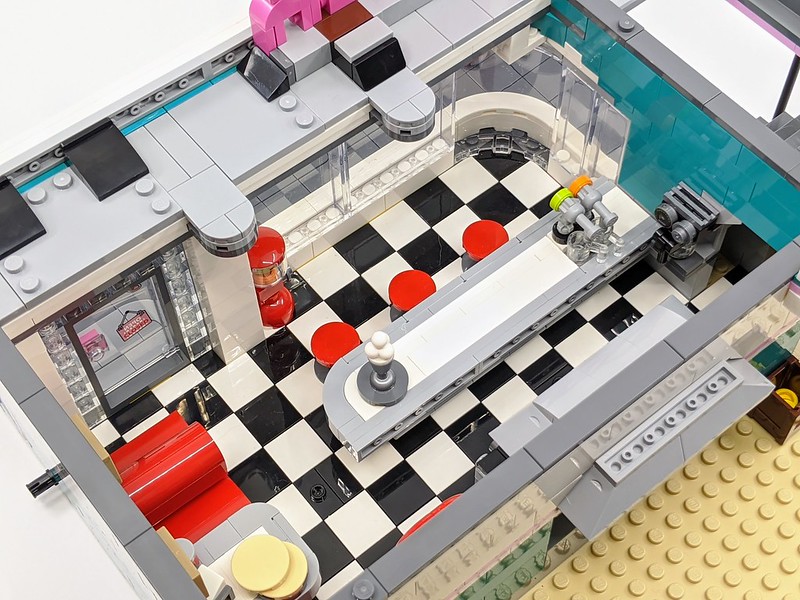 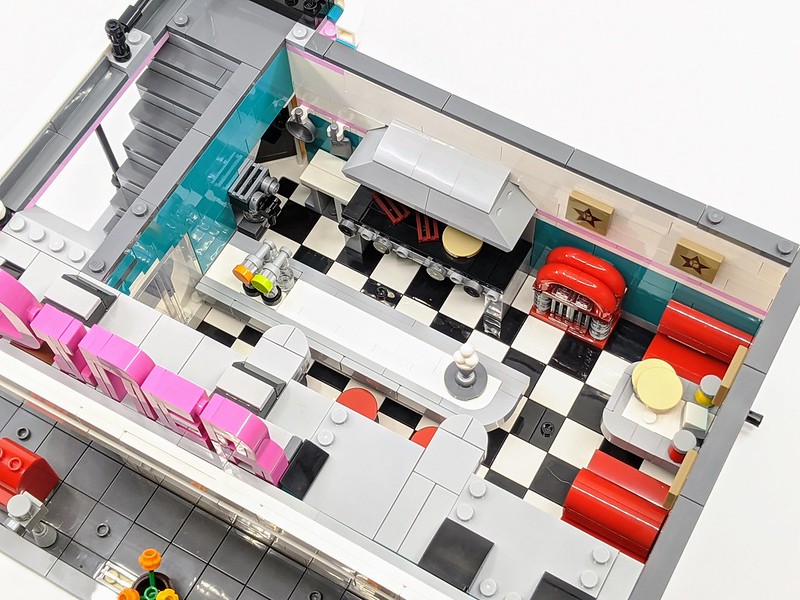 Above the diner is an equally retro gym. This also has some fun details including a boxing ring, weighs and a cool punching bag. The use of parts here helps to add simple but great looking details and play features. There are also some interesting build techniques employed here. There are a pair of windows near the entrance, these aren’t connected via studs, instead, the held in place when the arches above them are in place. One of the most impressive elements of the second-floor area has to be the exterior stairwell. I love the use of parts and how it all connects together, the result is outstanding. 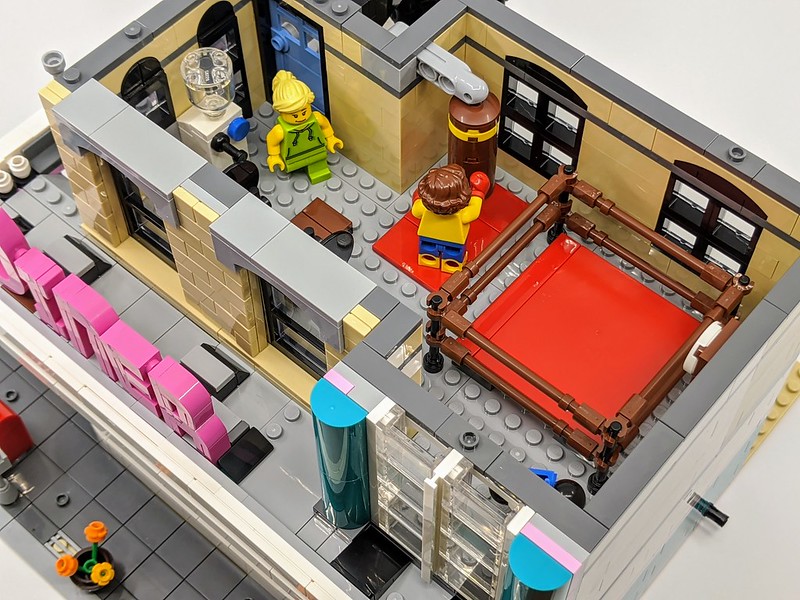 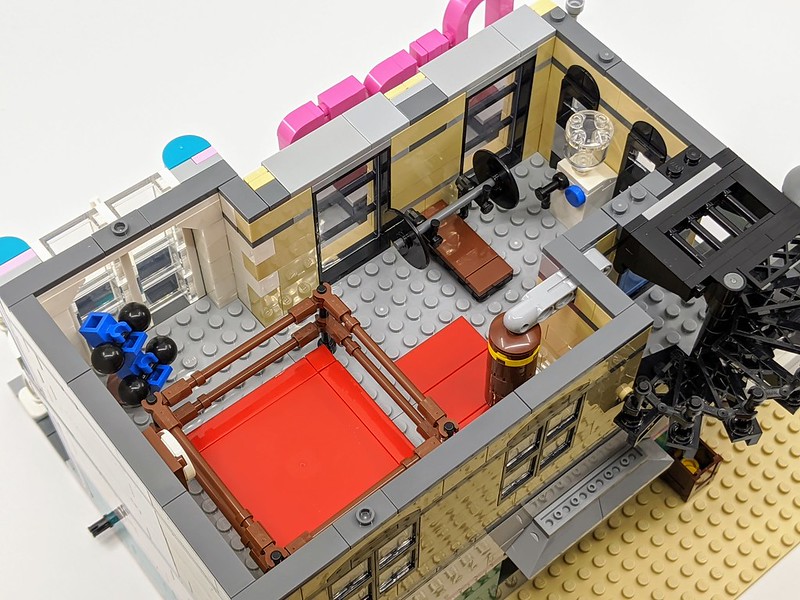 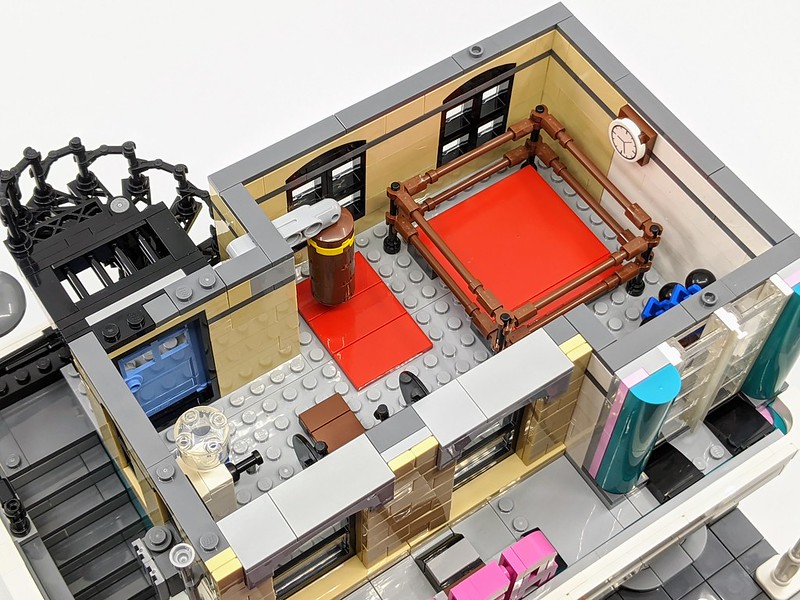 The next floor is a recording studio, this is a combination of an office and a small recording booth to lay down the next big hit. This is where the Modular sets really come into their own. There is a great use of parts to get some unique details. A collection of tooth bars are used to create the soundproofing on the walls of the recording booth. Just like the floor below, the recording studio also features some unusual build techniques to add unique features. The large window, which dominates the facade of the building is edged by a couple of porthole windows. These are slotted into place instead of being connected in a more familiar fashion. This is another thing I like about Modular sets, they push the envelope when it comes to the build, they don’t just chuck a lot of elements at the build just to bump up the piece count. Everything you build adds an immense level of detail. 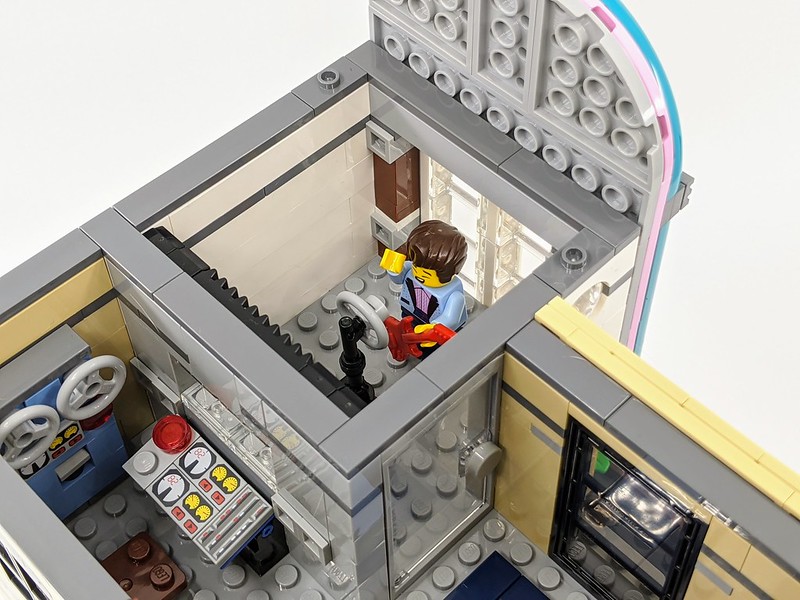 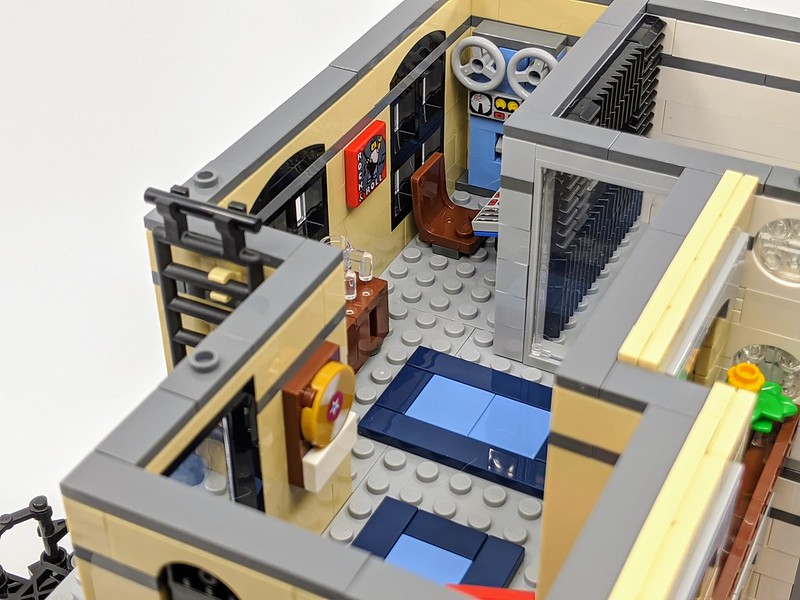 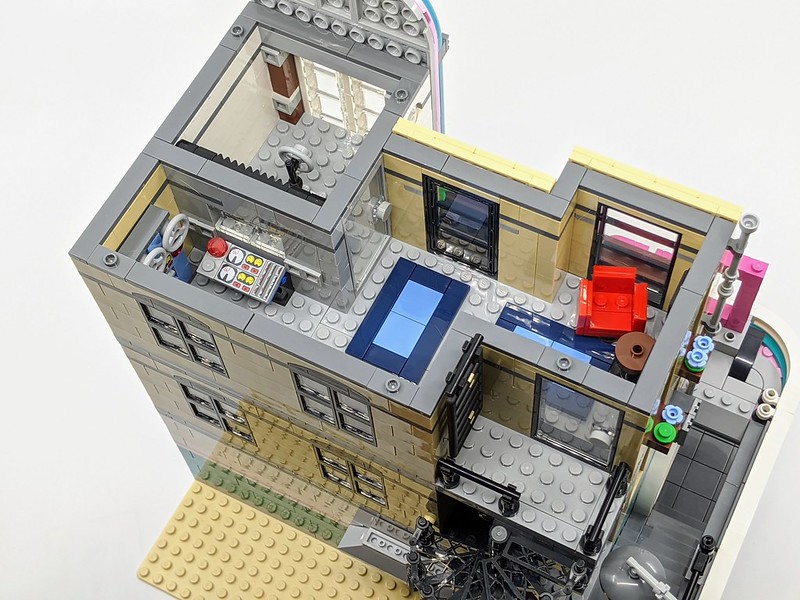 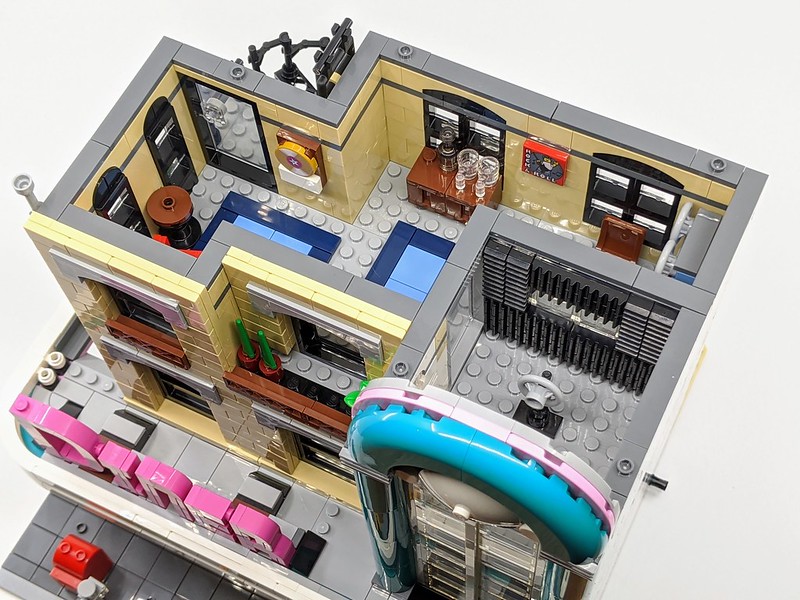 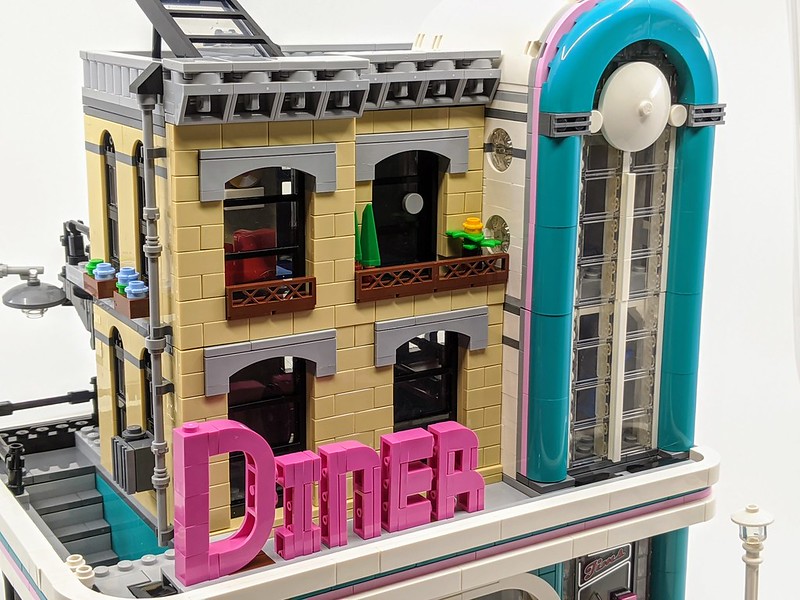 The final step of the build is the roof area, which may only be a small section of the overall build, but even this as great use of parts to create interesting details. Who knew a trio of very simple elements could result in such a great architectural features around the lip of the buildings roof. I also like there is a working skylight on the roof. 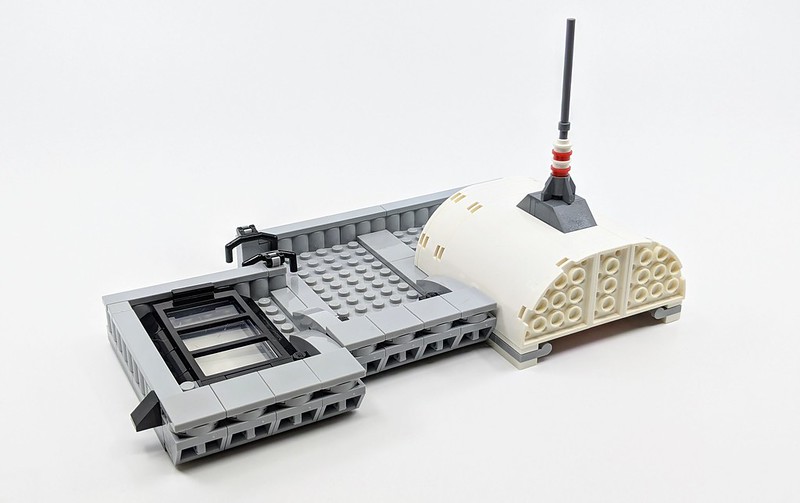 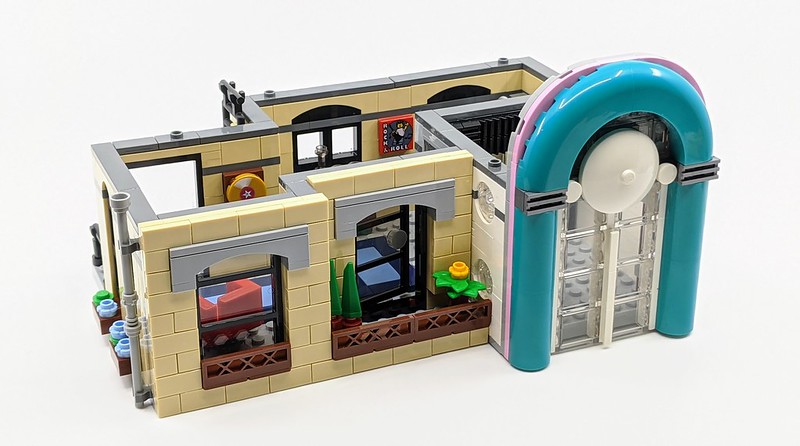 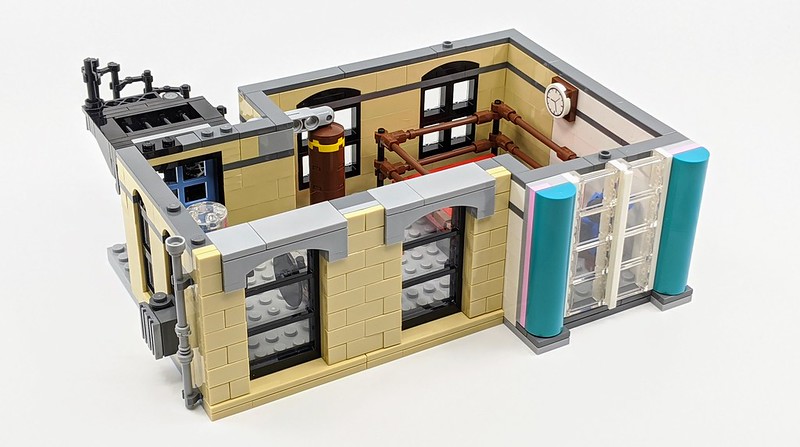 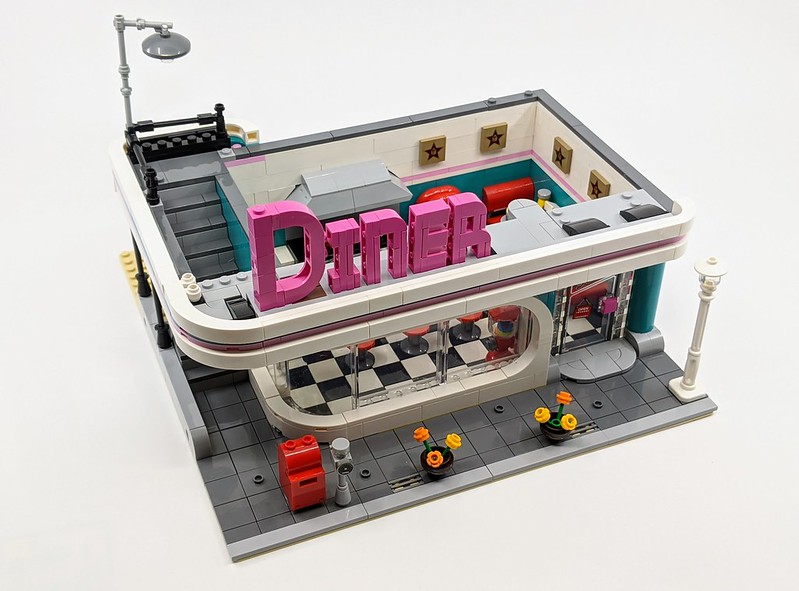 Finally, the set is one of few Modulars to also include an additional build. This is a pink convertible car, which is similar in style to what you’d find in LEGO City sets. The retro style of the vehicle matches that of the overall building, especially the ground floor diner. I really like the use of plates with holes along the sides of the bonnet and the winged sections to the rear of the car. It’s a nice addition to the overall set, even though it feels a little more disconnected to the building than the limo was in the Palace Cinema set. 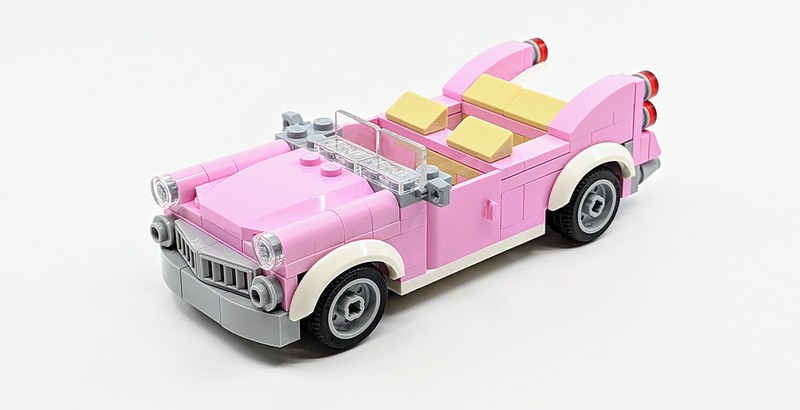 It wasn’t until recently that the style of Minifigures included in Modular sets changed. For most of the Creator Expert Modular Buildings, the inhabitants have had classic faces of a simple smile. In fact, this is the first Modular set to feature Minifigures with more expressive faces. There are six characters included, each relevant to the various floors of the building. So there is a chef and waitress for the Diner, a boxer, and bodybuilder for the gym, along with a singer and his manager for the recording studio. Most of these Minifigures are quite generic, which is in keeping with the rest of the sets. But I do like the Boxer, which uses the special torso with boxing gloves and the singer has a great alternate face. The Minifigures add a little character to the set, but they play second fiddle to the actual building.

Compared to the Bookshop, the Downtown Diner is certainly more detailed inside, this is thanks to its various themed floors. But the actual build felt different, each numbered stage felt a little more involved than the Bookshop. That means a heck of a lot of elements to go through for each step. However, I really enjoyed the build, especially how elements are used in unique ways or how they are put together in an interesting matter. Things like the windows aren’t actually connected via clutch power instead there are held, quite cleverly, in place with arch bricks. The colour scheme is really eye-catching, there is something cool about pink, turquoise, and white that just works so well. This coupled with the interesting shapes of the architectural aspects of the set, like the large open curved window of the diner and that imposing rounded column window which runs across each floor of the building. 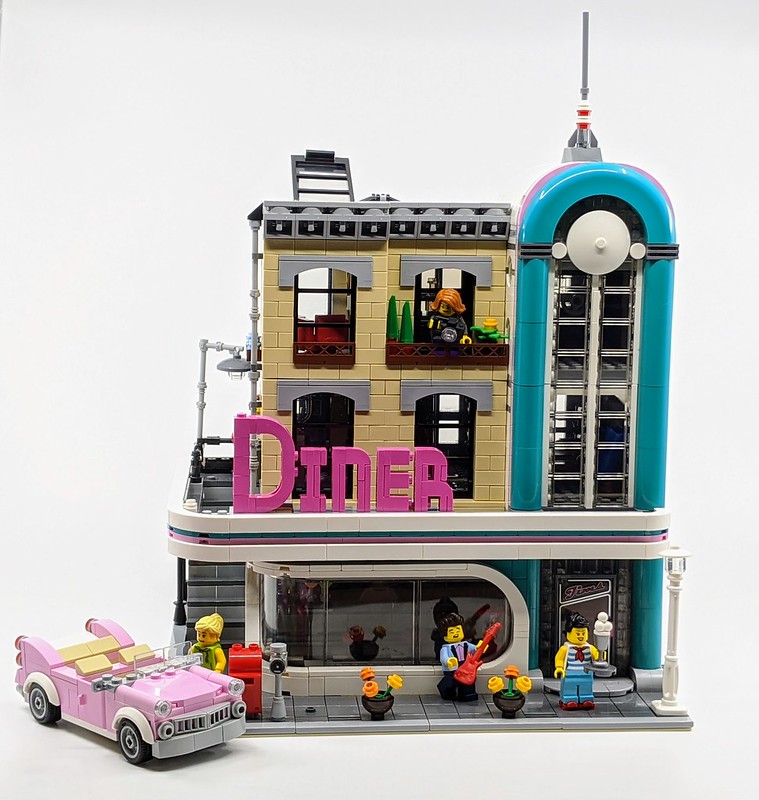 As soon as I finished the Bookshop, I had the bug so I was keen to get building the Downtown Diner and yes I have the bug now. I’ve never underestimated the appeal of the Modular sets, they are well worth the money and are genuinely lovely things to build. I doubt I’ll be creating a vast city street with the ones I have built so far unless I can magic up a new room somewhere, but it’s safe to assume, it won’t be long before I’m building my next LEGO Creator Expert Modular building.

This set was provided to BricksFanz by the LEGO Group for purposes of review. The thoughts within this review are that of BricksFanz and do not reflect those of the LEGO Group. Providing the set for free does not guarantee a favorable opinion of the set.