For the last few years Toys R Us have offered a number of exclusive sets has part of their Bricktober LEGO® event. However in 2018 Toys R Us ceased trading in a number of countries including the UK and US. Despite this the 2018 Bricktober sets had already been produced and appeared in various places. The 2018 range included four packs of Minifigures featuring characters from Jurassic World, NINJAGO, Harry Potter and Marvel Super Heroes. Hamleys have previously brought the LEGO Marvel Super Heroes Minifigure Collection to the UK and have now done the same with the Harry Potter pack. The pack is available from Hamleys for £20, with no other purchases required. Now the pack is available in the UK, it’s review time. 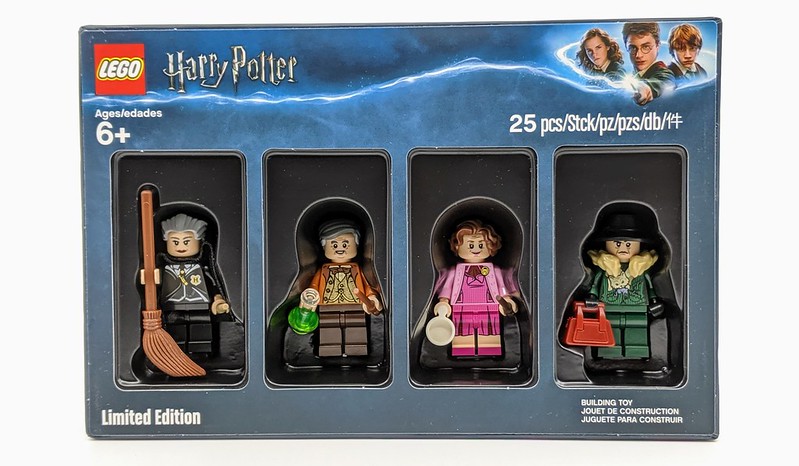 The set features four unique Minifigures based on characters from the Wizarding World of Harry Potter. Unlike some of the other Bricktober Minifigure Pack, all of the characters are exclusive to this set. The four characters include Madam Rolanda Hooch, Professor Horace Slughorn, Dolores Umbridge, and Boggart Snape.

Madam Rolanda Hooch is a Flying Instructor at Hogwarts and only appeared in the very first Harry Potter film. Her LEGO appearances are almost as limited. She appeared in two Quidditch themed sets back in 2002 and again 2010. With the Harry Potter theme returning last year, her only appearance so far is in this Bricktober Minifigure set. The Minifigure is based on the characters appearance from the film and features a double-sided head. The best of which is the side wearing the yellow flight goggles. Madam Hooch also includes a Nimbus and wand.

Professor Horace Slughorn was a Potions Master at Hogwarts as well as ex-Head of the Slytherin House. Unlike Madam Hooch, Professor Slughorn has never appeared as a physical Minifigure before this Minifigure Pack. Making him rather elusive and a must for collectors. The Minifigure represents the Professor in his formative years. Print on his torso his nicely detailed and he comes with a potions bottle and wand.

Dolores Umbridge is the ruthless Ministry of Magic bureaucrat who later becomes the headmistress of Hogwarts, much to the dismay of all at the school of Witchcraft and Wizardry. In the world of LEGO, she has only appeared in a single set over the years, that being the 2007 version of Hogwarts Castle. The Minifigure here is a delight, her bright pink outfit is captured nicely. With dual-molded legs working well for her skirt and a fun little cat pin badge on her cardigan. Her face is double-sided with a her pained ‘nice’ expression on one and her fearless scowl on the other. She has her trademark cup of tea and a wand.

Now this version of Snape is an odd one as it’s based on a Boggart, which is a magical creature that transforms into someone’s greatest fear. No one knows the true form of a Boggart, as it shape shifts to terrify whomever is in front of them. This turns Snape into a version of himself wearing his Grandmother’s clothes. This is a vast improvement on the 2004 version, it looks like a completely different character. So the torso print features the animal fur scarf, which blends nicely with a feather boa neck element. He also has a rather rare black version of the LEGO Minifigures Scarecrow hat. His look is finished with a handbag and Snape’s judging glare.

These Bricktober sets are often a great source of Minifigures and this certainly is no different. Every single one of the Minifigures could be considered rare, not only have some only appeared once before, others haven’t even been in a set before. The Harry Potter theme has attracted a new fanbase to LEGO, this is partly driven by the various Minifigures. The LEGO Wizarding World Minifigure collection was one of the most popular series released in recent years. So thanks to the rare spread of characters, I’d expect this to be a popular set. It’s only the second of the Bricktober packs to be available in the UK. You can get it now from Hamleys flagship store on Regent Street in London, where it is available for £20 without the need to purchase anything else. Plus the set can also be purchased online.