DK Books are set to release a new LEGO® title in 2020 called Epic History. The book follows on from the previously released LEGO Animal Atlas and the recent LEGO Amazing Vehicles. These book are similar to other inspirational build books from DK, which offer ideas for readers to build with their own bricks. But each book also features a selection of bricks to build several exclusive minibuilds. LEGO Epic History features four minibuilds including a Rocket Launch Pad, Woolly Mammoth, Pagoda and Parthenon. The book will be available in May 2020. 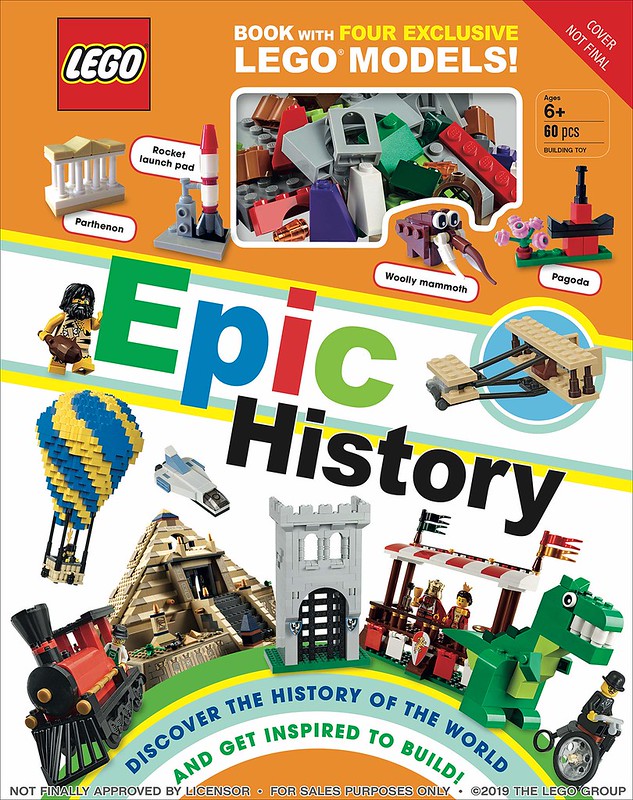 Discover the history of the world and get inspired to build! With specially created LEGO® models of the most exciting moments in time, learning history has never been more fun.

Children will explore periods from the Stone Age, through ancient civilizations, the Industrial Revolution, and up to modern days. Along the way, they’ll explore a medieval castle, tour the Ancient Egyptian pyramids, blast off on the first space flight, meet minifigures from different eras, and much more!

LEGO Epic History is packed full of fascinating facts and images of more than 100 models of awesome historical artifacts and events. Best of all, it comes with bricks to build four exclusive LEGO mini-artifacts.

Colorful scenes showcase fan-built LEGO models accompanied by fascinating facts, data, record-breaking information, as well as myths and legends of the time. Maps and timelines guide readers through the world’s most amazing moments.

Each model is built with mostly standard LEGO bricks. Tips and photographic breakdowns of some models will inspire children aged 6+ years old to imagine traveling back in time and build the world that would surround them. A combination of clear photos, authoritative text, fun facts, and classic LEGO humor helps children learn as they build and play