To coincide with the start of Comic-Con, Warner Bros. Interactive has unleashed a new trailer for LEGO® DC Super-Villains. The games arrives this October and for the first time ever, you create your own LEGO Super-Villain and join forces with the DC Universes most evil bad guys. There are also new details about UK retailer variants and pre-order bonuses, which include a Sainsbury Group exclusive edition and a GAME exclusive steelbook. 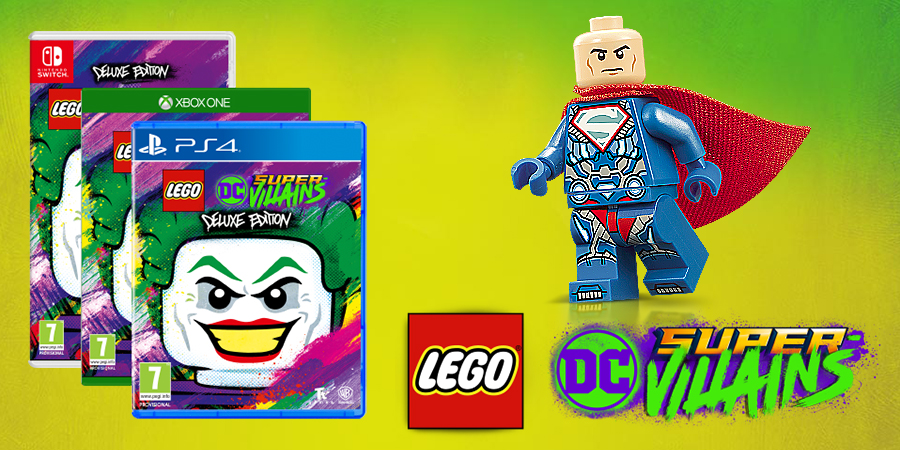 ​​​​​​​Retail Exclusives for GAME, Argos and Sainsbury’s in the UK and GameStop in Ireland

Warner Bros. Interactive Entertainment, TT Games, The LEGO Group and DC Entertainment today revealed a new character customization trailer for LEGO® DC Super-Villains, the first LEGO® game to put players at the centre of a villain-centric adventure packed with favourite locations and characters from across the DC universe, prior to the official start of San Diego Comic-Con 2018.

The trailer focuses on the character creator feature and provides players with an extended look at how they can create and play as their own DC Super-Villain character, unleashing mischievous antics and wreaking havoc throughout the action-packed game. A player’s character becomes the centre of the story, while teaming up with an iconic variety of villains to adventure through the hilarious and original story written in collaboration with DC Comics.

Fans interested in checking out the character creator feature will have an opportunity this weekend at San Diego Comic-Con, where a hands-on demo of the game will be playable at the LEGO® booth (#2829), DC Comics booth (#1915) and the Warner Bros. Booth (#4545) during normal show hours.

Additionally, the team behind LEGO® DC Super-Villains, including Arthur Parsons (head of design, TT Games) and Ames Kirshen (VP, Interactive & Animation, DC Entertainment), and voice actors Kevin Conroy (Batman), Tara Strong (Harley Quinn), Julie Nathanson (Silver Banshee) and Fred Tatasciore (Solomon Grundy, Clayface, Black Adam, Killer Croc), will give Comic-Con attendees an inside look at the first LEGO game to put players at the centre of a villain-centric adventure packed with favourite locations and characters from across the DC Universe on Friday, July 20 at 2:15pm in Room 6A. This celebration of villainy will provide fans with exciting character reveals and details about the story.

LEGO®DC Super-Villains will be available in the UK on 19th October, 2018 for PlayStation® 4, Xbox One X, Nintendo Switch™, and PC.

The Deluxe Edition (containing Game, Steelbook Case, Season Pass and Lex Luthor MiniFigure) is available exclusively at GAME in the UK and GameStop in Ireland. Players who pre-order the Deluxe Edition get early access to the DC Super-Villains TV Series Character Pack.

Players who purchase the game at Sainsbury’s and Argos in the UK will also receive a Joker dog tag.