The LEGO® ART sets were introduced a couple of months ago and form part of the new 18+ range of sets, which are solely aimed at adult LEGO fans or AFOLs. However, LEGO ART sets have an appeal beyond the average LEGO fan. As well as to sets based on movie licenses, there are two sets which are inspired by pop culture icons. One is a completely new subject matter for LEGO, in the form of Andy Warhol’s famous Marilyn Monroe popart and the other has previously seen thanks to the LEGO Ideas set, inspired by the Beatles Yellow Submarine film. These uncommon subject matters make the sets an interesting route into LEGO building for those who are fans of the Beatles, Warhol or Monroe. As the sets are so similar in their build, I’ve combined them into a single review, so let’s take a closer look at Andy Warhol and The Beatles LEGO ART sets.

American artist, Andy Warhol created a number of iconic pieces of artwork during his career. One of his most famous, beyond the Campbell’s Soup Cans, was dubbed Marilyn Diptych. This was a series of images of the iconic movie actress, Marilyn Monroe. Soon after her death, Warhol created the first piece of artwork to feature Monroe, which used a single image taken from a publicity shot from the movie, Niagara. This inspired countless other variants of that image, often in bright, contrasting colours. It also acts as the inspiration for this LEGO ART set, which can be built in one of four different colour schemes.

If you’re an Andy Warhol or Marilyn Monroe fan, this is the set for you. Recreate iconic art with this LEGO® Art Andy Warhol’s Marilyn Monroe (31197) set. Escape from everyday life with a relaxing activity and some focused me time.

Creative project
Reimagine Andy Warhol’s famous pop art portrait of Marilyn Monroe. As you build, listen to the included Soundtrack and immerse yourself in a world of art and creativity as you hear unexpected details and audio stories linked to the set. Finish the build with an exclusive signature tile and display your art on a wall or shelf. 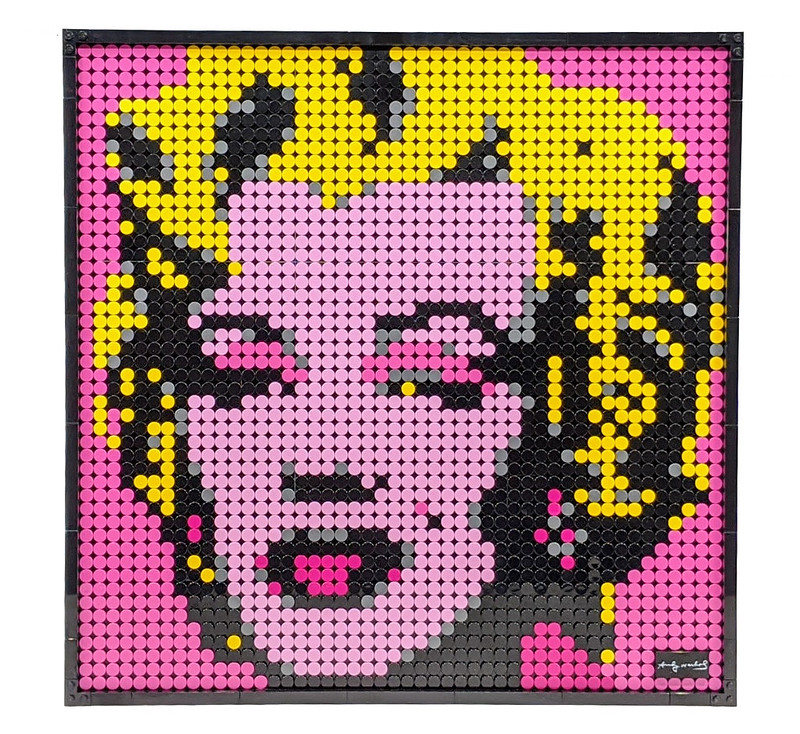 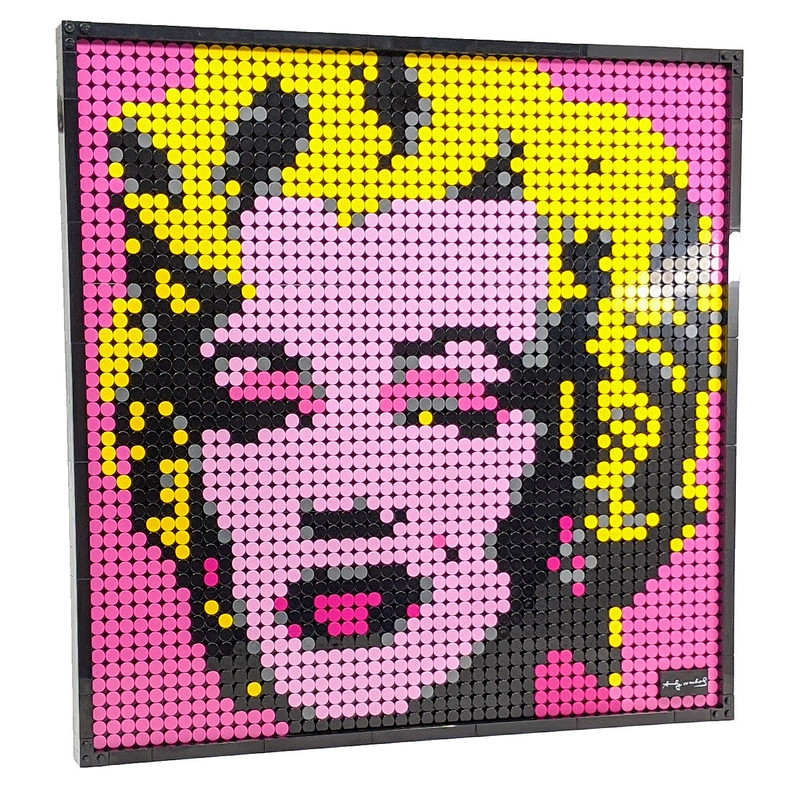 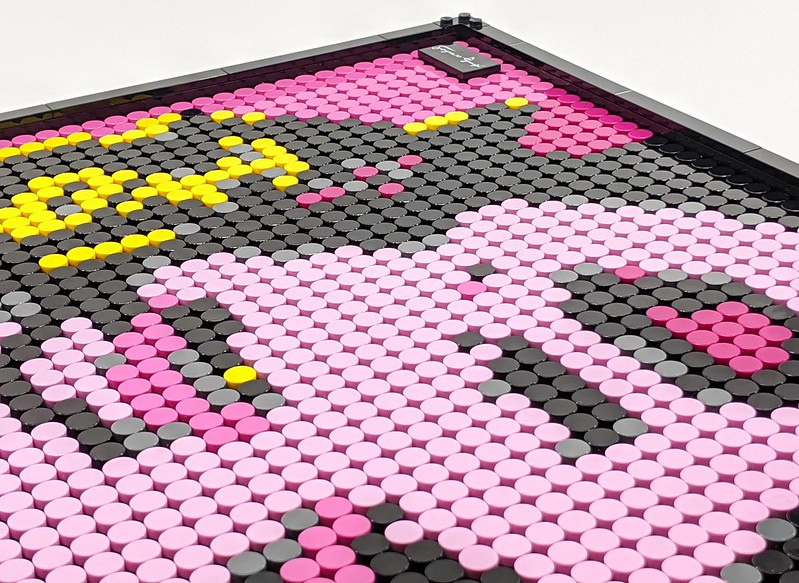 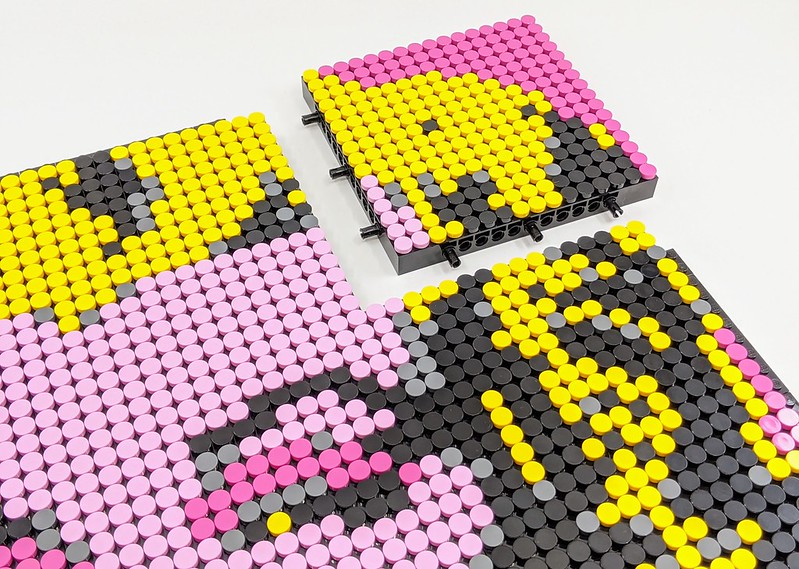 As with all the LEGO Art sets, there is more than one image to build. Both of these sets have four different images to build. So the Marilyn Munroe takes its alternative builds cue from the famous Marilyn Diptych silkscreen painting. This was the basis for a series of the same image of Marilyn, which were crafted in various different colours. Each of the four builds uses the same image just with different coloured round tiles. Of all four LEGO ART sets, this one has the most ‘spare’ elements due to the vast difference in the colour scheme for each image. Instructions for each image variant are included in the instruction booklet and if you want to build all four images at the same time, you’ll need four sets. 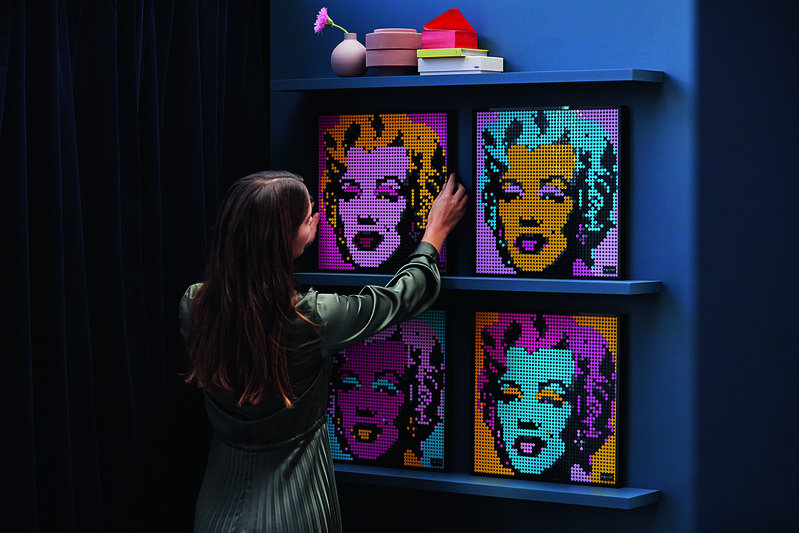 The Beatles are known by music fans across the world. The four-piece band started their career in Liverpool and soon became a worldwide phenomenon. One of their most famous records is the White Album, which was the ninth studio album released by the band and their only double LP (ask your parents kids). This album featured various pieces of artwork inside, which has been the inspiration for the LEGO ART set. As a four-piece band, you can build the set to feature a single image of each member of the band. I decided to go with George Harrison as I love his song ‘Here Comes The Sun’, obviously Paul and John are the most famous members of the band and Ringo will forever be the voice of Thomas the Tank Engine.

If you’re a Beatles fan, we have the perfect set for you. Build 1 of 4 unique portraits of the iconic band members with this LEGO® Art The Beatles (31198) set and relish a creative escape from everyday life.

Relaxing project
Create 1 of 4 detailed wall art portraits of your favourite Beatle, whether it’s John Lennon, Paul McCartney, George Harrison or Ringo Starr, with this 2,933-piece set. While building, listen to the included Soundtrack and let it immerse you in stories and unexpected details about the band. Finish the build with a ‘The Beatles’ signature tile and display it on a wall or shelf. 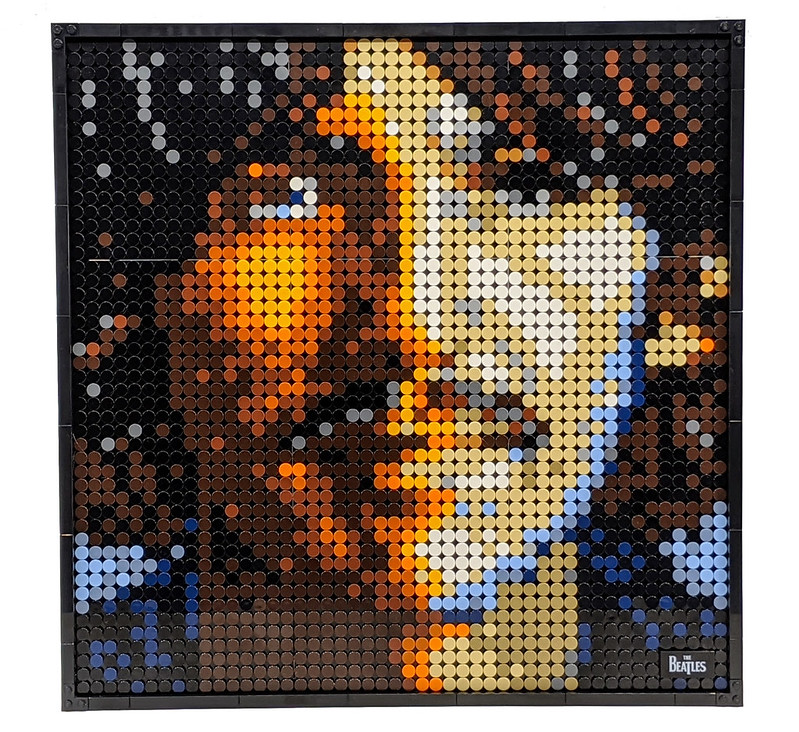 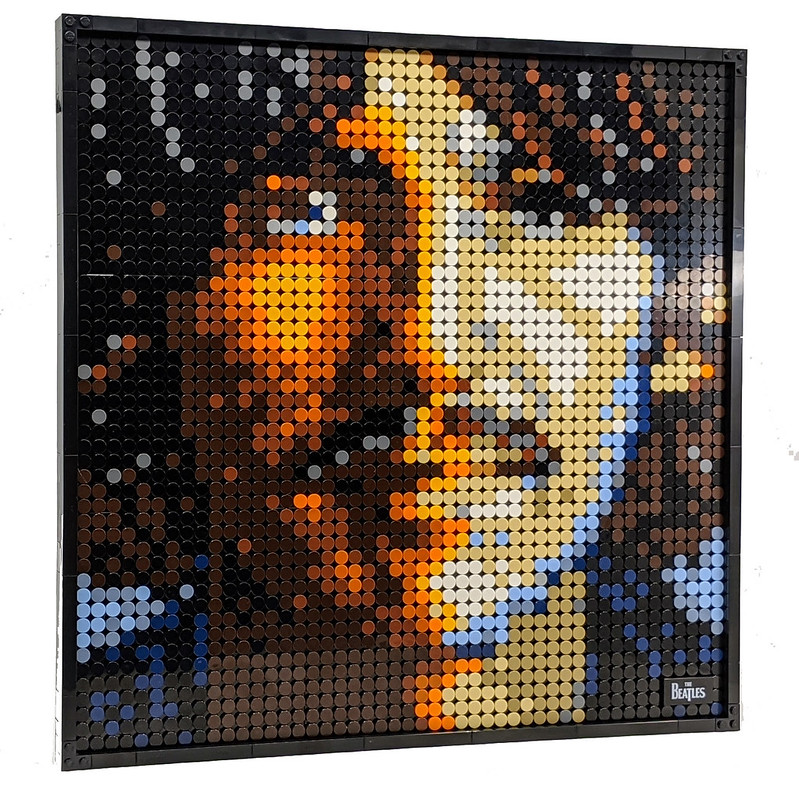 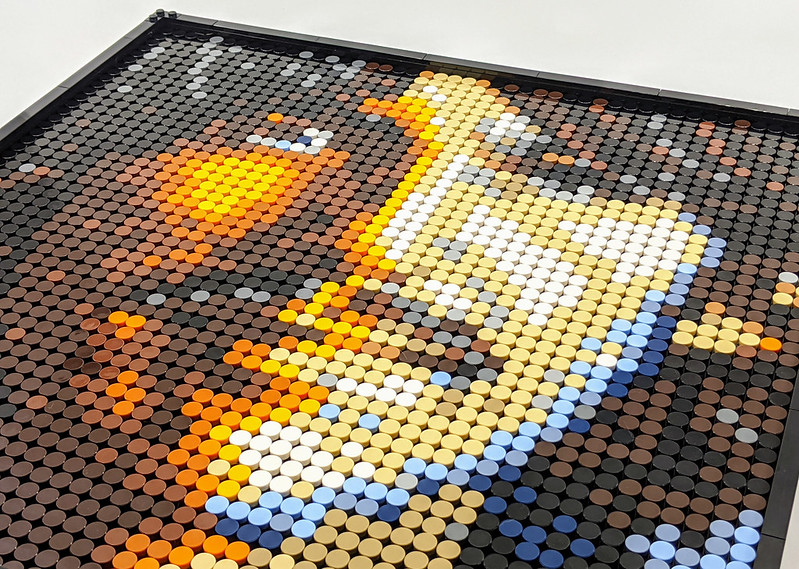 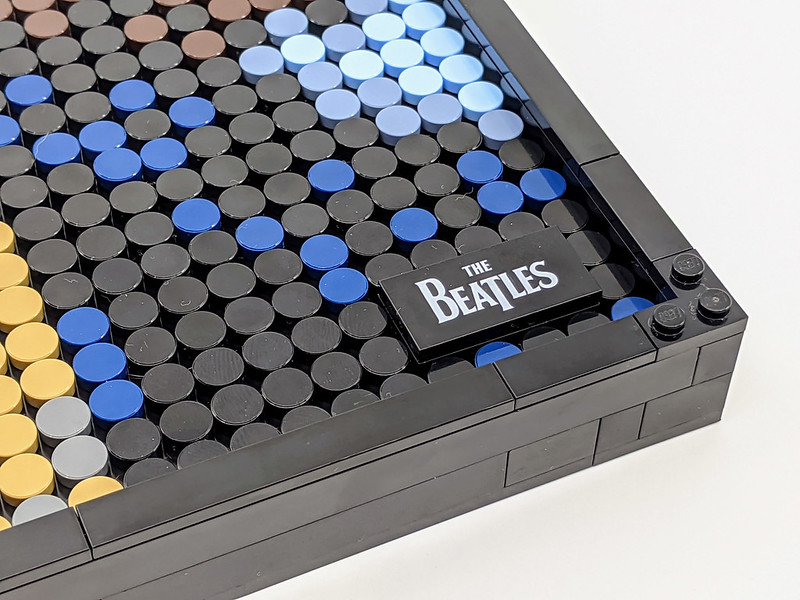 Just like the Monroe set, The Beatles one offers the ability to build the set in one of four different ways. Each focused on a different member of the band. So you can build images of John Lennon, Paul McCartney, Ringo Starr or George Harrison. Only one of the images can be built at a time. So if you want to reunite the band in LEGO form, you’ll need to buy four sets. Unlike the Monroe set, there are almost double the number of coloured elements used, so it could be considered a little more tricky to build. 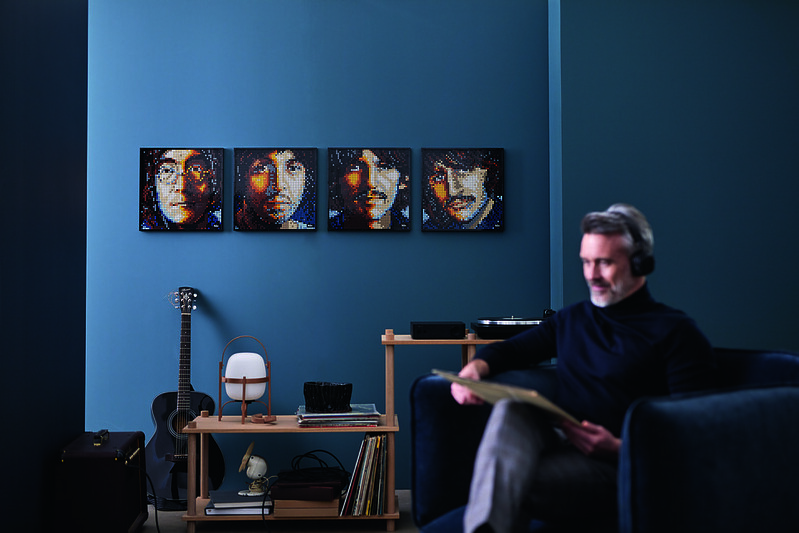 The basis of all LEGO ART sets are exactly the same – a collection of nine 16×16 brick plates, act as the base of the build. These new baseplate elements are one brick high and have 11 Technic pinholes along each of the outer edges, allowing them to be connected together with a series of Technic pins. Each of these plates features 256 studs, which is quite surprising as it doesn’t seem that much as you’re building them. Unlike the Marvel and Star Wars versions, both The Beatles and Warhol set use 1×1 round flat tiles in place of studs. Although the build is no different, the final appearance of the set is vastly different. I’m not sure which I prefer better to be honest. Studs give the image some texture, but the flat tile gives the impression of coverage a wider surface. The only thing I found was the flat tiles have a much lower depth than studs. So the nameplate feels a little too raised, the addition of a 2×4 plate wasn’t really needed, the printed 2×4 flat tile would have sufficed. The frame of the sets is standard across all standard versions of the build. It helps to strengthen the overall build and adds an extra 1 stud wide strip around the image. Two new elements provide useful functions, these include a new wider brick separator and a pair of hooks, which connect to the inside of the brick plates with Technic pins. 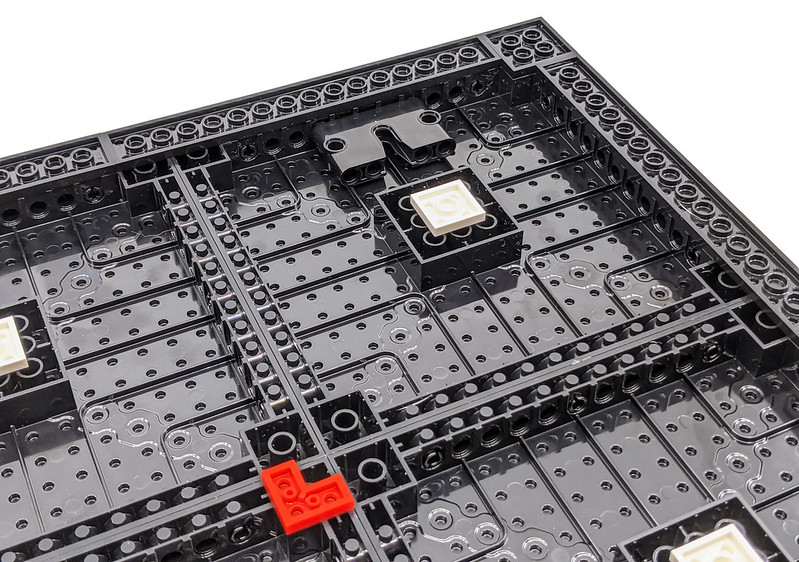 The LEGO ART sets are an interesting addition to the LEGO product range. They are a vastly different build experience to any other LEGO sets, which may appeal beyond traditional LEGO fans. The use of pop culture icons such as The Beatles and Marilyn Monroe extends that appeal to fans of The Beatles, Monroe and Warhol. The build is something you can do whilst watching a movie or better still as you listen to the exclusively created ‘soundtracks’. I crafted a system in which I used the inner plastic tray from a LEGO Advent Calendar, I popped each of the coloured elements in different sections of the tray, in the same order they are listed in the instructions. This makes thing much easier to follow, especially as some for the colours are quite similar. In fact, I would have liked the bagged elements to note which numbered colour they actually are. Of the two sets featured here, the Monroe set would be the best one for a novice LEGO fan to tackle, as it features the least amount of different colours and there are larger blocks of the same colours. The addition of a specially created audio accompaniment is a nice bonus, although I’d have like to hear more from the LEGO side of things. That being said the information being discussed around The Beatles music and Warhol’s iconic artwork is interesting enough. The only downside of the sets has to be the cost. More so with The Beatles sets, as most fans would want to display all of the fab four, this could become quite costly.