LEGO® Ideas continues its run of unique sets, with a brick-built recreation of Vincent Van Gogh’s Starry Night. The 44th LEGO Ideas set is inspired by Truman Cheng’s original fan design, which reimagines the famous painting as a three-dimensional build. Ths layer version of Van Goh’s Starry Night painting includes a frame, stand and the ability to hand it on the wall, as well as including Vincent Van Gogh in minifigure form. The 2316-piece set will launch globally on June 1st, but LEGO VIP and MoMA members can get the set from May 25th. There will also be a Van Gogh-inspired build contest held in LEGO stores and online in selected countries. Fans can create their own LEGO takes on the night sky and the designs will inspire a piece of LEGO artwork, which will be displayed in the lobby of the Museum of Modern Art in New York City. 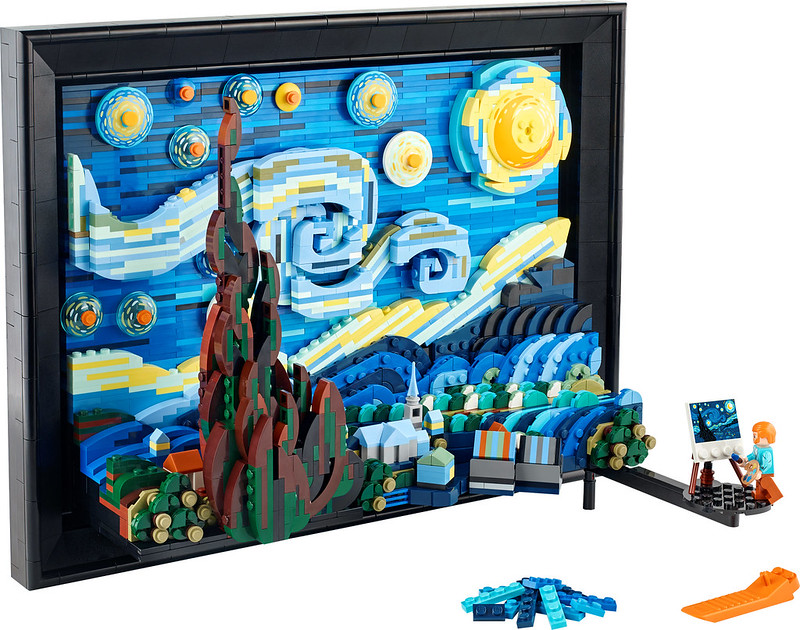 17th May, 2022: In tribute to Vincent van Gogh’s famous painting, the LEGO Group has revealed the LEGO® Ideas The Starry Night set. This beautiful set was designed by Truman Cheng, a 25-year old Hong Kong based LEGO fan, through a submission on the LEGO Ideas platform, and has been created in conjunction with The Museum of Modern Art in New York.

The three-dimensional set reimagines Vincent van Gogh’s renowned 1889 painting in LEGO form, with strong emphasis on the artist’s striking brush strokes and colour choice. Inspired by the view from his window at the Monastery of Saint-Paul de Mausole asylum in Saint-Rémy, France, where the artist spent twelve months, The Starry Night is one of the world’s most well-known post-impressionist works and has been a visitor favourite at MoMA since it first arrived in 1935.

Art lovers can swap paint palettes for LEGO bricks and re-create one of the world’s most recognisable masterpieces. From the twinkling stars and mesmerising moon to the sleeping Provence village below, van Gogh’s image has been brought spectacularly to life in brick, capturing the artist’s swirling brushstrokes.

To celebrate and inspire creativity, the LEGO Group has also launched a competition encouraging fans to submit their own mini LEGO builds inspired by the night’s sky. Winning designs will form part of an installation displayed in the lobby at the Museum of Modern Art this summer. Participants in Spain, UK, Germany, France, Canada, Mexico and Poland can enter by simply visiting https://www.LEGO.com/Starry-Night or select LEGO stores.

Honouring the celebrated artist, the set also includes a van Gogh minifigure, complete with a paint brush, palette, easel and mini painting on a printed tile, which can even be attached via an arm to show him painting the scene. The intricate set can be displayed standing or on the wall, thanks to the hanging feature.

When developing the original concept, Truman Cheng, a PhD student and LEGO fan, was just playing with LEGO bricks when he realised that stacking them together in random intervals looked a like van Gogh’s iconic brush strokes. “It was a was a good brain tease to come up with tricks and techniques to capture the look of the original painting,” Cheng said, talking about his design “The brushwork goes into many directions in the moon and the swirling cloud, so there was some creative use of bracket and clip elements involved.” 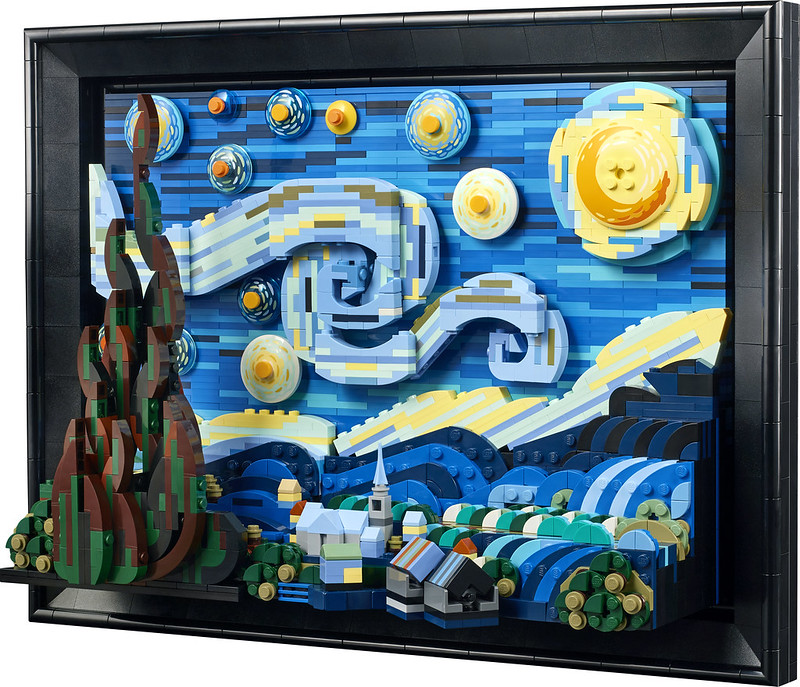 Once Truman’s design had received 10,000 votes from the LEGO fan community, it was considered for development by the LEGO Group. Talking of the decision to turn the design into a real set, Federico Begher, Head of Global Marketing, said, “What makes The Starry Night so irresistible is the expressive brush work and vibrant colours used throughout, which tell the story of humanity’s everlasting dream for better things. Truman’s design was a masterpiece in itself – showing how many different LEGO elements and techniques could be used to replicate van Gogh’s iconic painting.

At the LEGO Group, we want to inspire the world to get creative, so we’re incredibly proud to have brought this set to life in partnership with such an iconic institution as MoMA, allowing fans to be artistic with bricks, and to create and display their own masterpiece.”

“At MoMA, we celebrate the opportunity to connect art and audiences, and are thrilled to be part of a new way to experience van Gogh’s work, and to inspire the creative impulse in people of all ages,” said Sarah Suzuki, Associate Director, The Museum of Modern Art.

The set will go on sale on 25th May exclusively for LEGO VIP’s (www.lego.com/VIP) and MoMA members (https://membership.moma.org/) and then will be available globally from 01st June for £149.99 / €169.99 / $169.99 on www.lego.com/starry-night, in LEGO stores and with MoMA Design Store in New York City and online at store.moma.org. 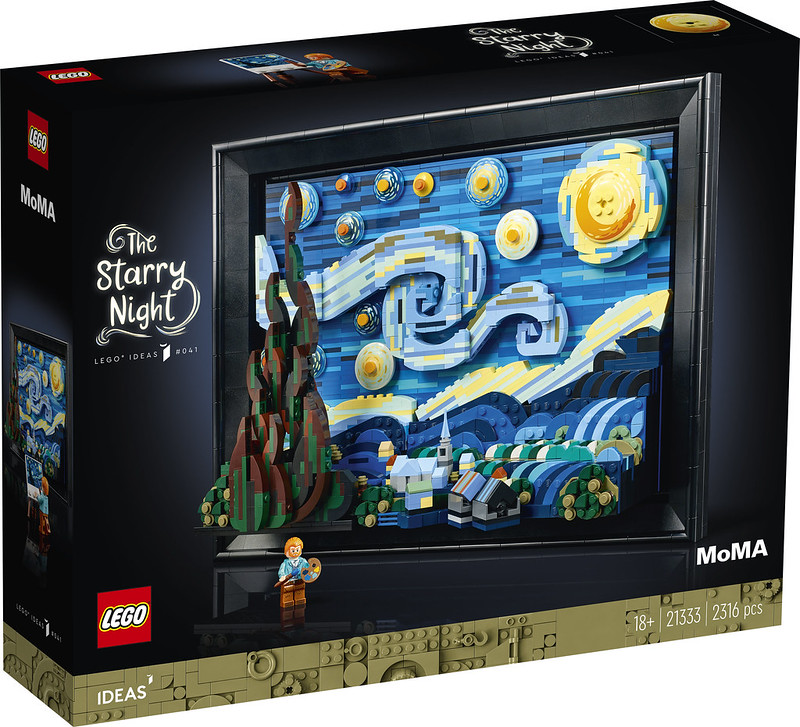 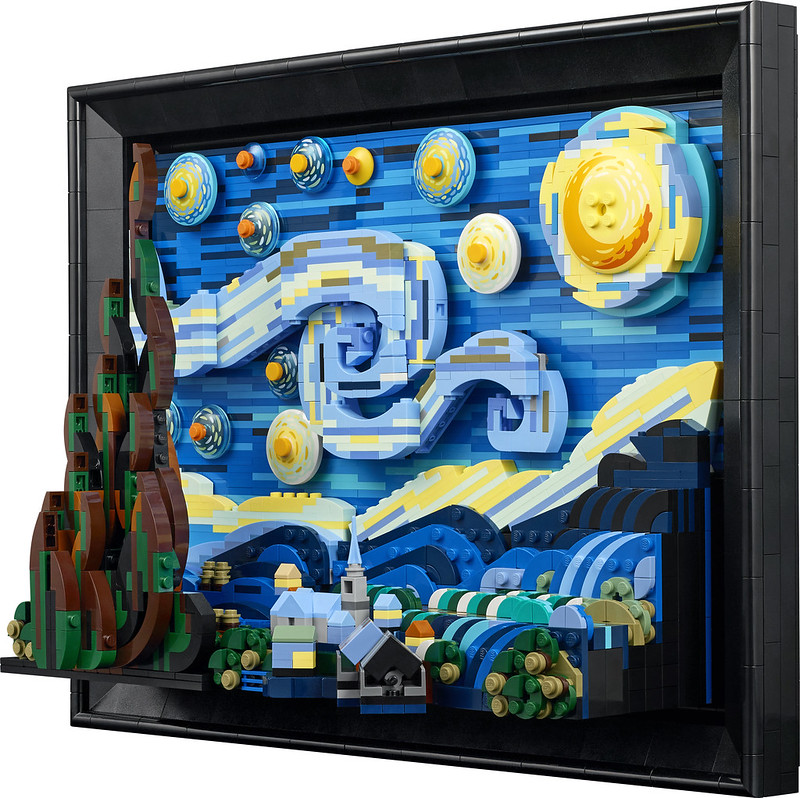 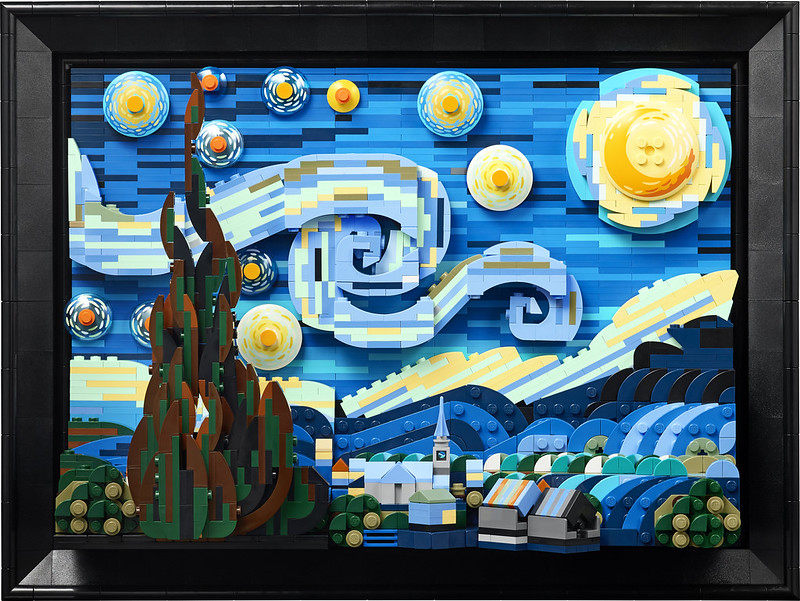 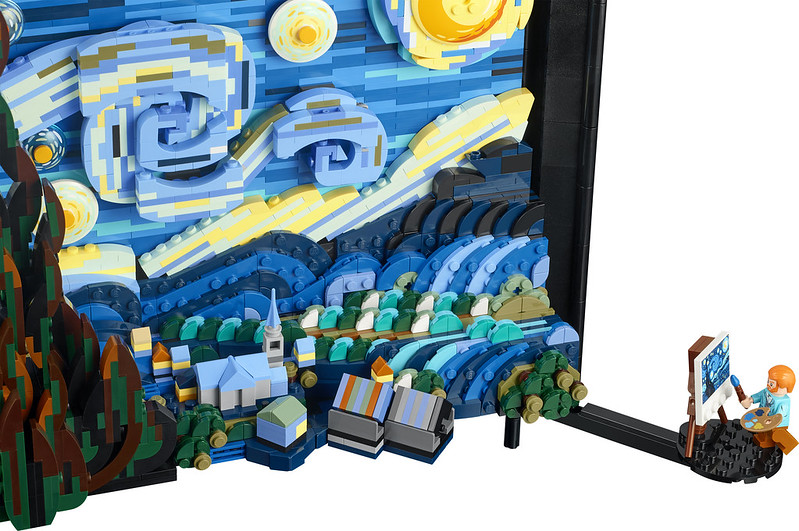 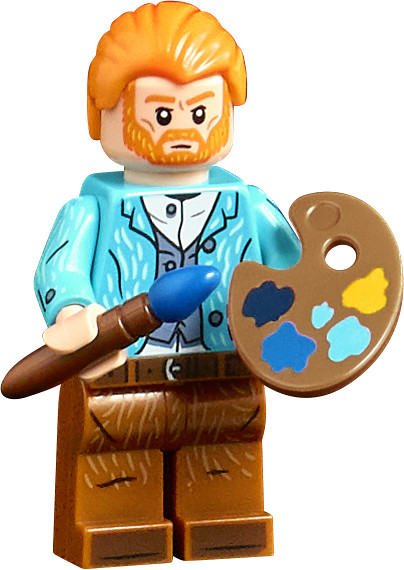 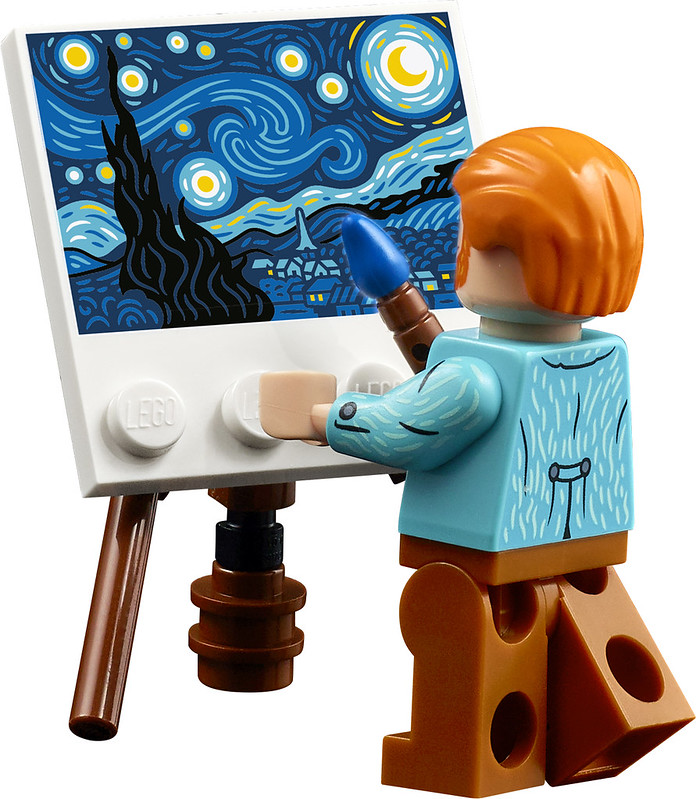 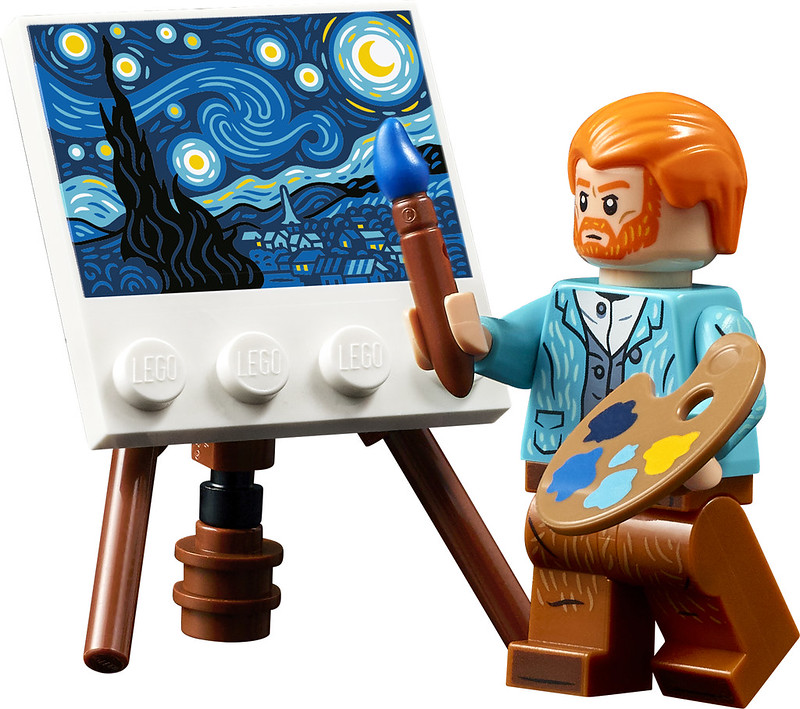 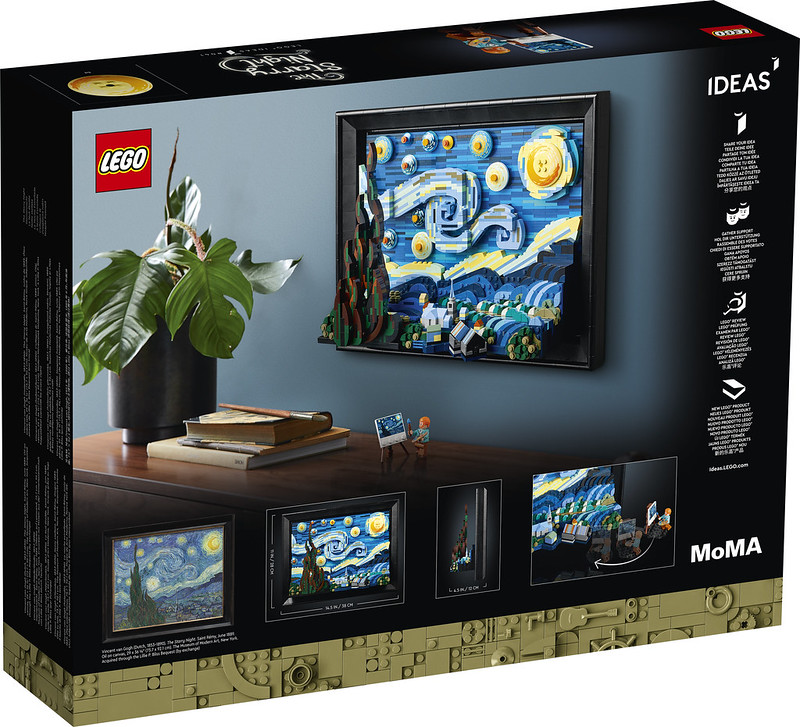