Further details of the mysterious new land of LEGO® MYTHICA, which is currently taking shape at LEGOLAND Windsor, have been revealed today. These include the reveal of the LEGO MYTHICA Flight of the Sky Lion ride, which will be the UK’s first flying theatre experience. The ride will take visitors across the world of LEGO MTHICA, where they will be various mythical LEGO creatures. There will also be a pair of new freefall drop rides and the old SQUID Surfers ride has been rebranded to fit into the new areas of the park. Visitors to MYTHICA will also be able to bring the creatures of MTHICA to life with a new AR feature being added to the LEGOLAND app. Visitors will hopefully be able to experience this new land at LEGOLAND Windsor in late May. 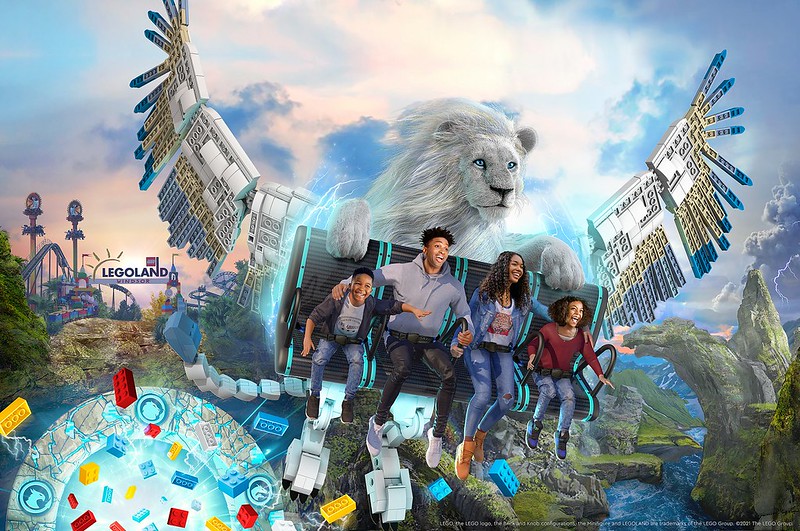 Friday 12 March 2021: The LEGOLAND® Windsor Resort has today revealed that its new multi-million-pound land, created by kids for kids, will be home to the UK’s first Flying Theatre ride when it opens this May.

Standing at over 25 metres tall, the Flight of the Sky Lion ride will be at the heart of LEGO® MYTHICA: World of Mythical Creatures, the hotly anticipated new land which marks the Park’s single biggest investment since the gates opened 25 years ago.

Once aboard the Flying Theatre ride, families will quite literally be taken under the Sky Lion’s (Maximus) wing and transported to the parallel universe of LEGO MYTHICA, where mythical LEGO creatures come to life. As they swoop, duck and dive over the incredible landscape, families will come face-to-face with the realm’s many characters, including the two-headed Hydra (Duo), Fire and Ice Bird (Crystal Flame) and the Greek mythology inspired Chimera creature. 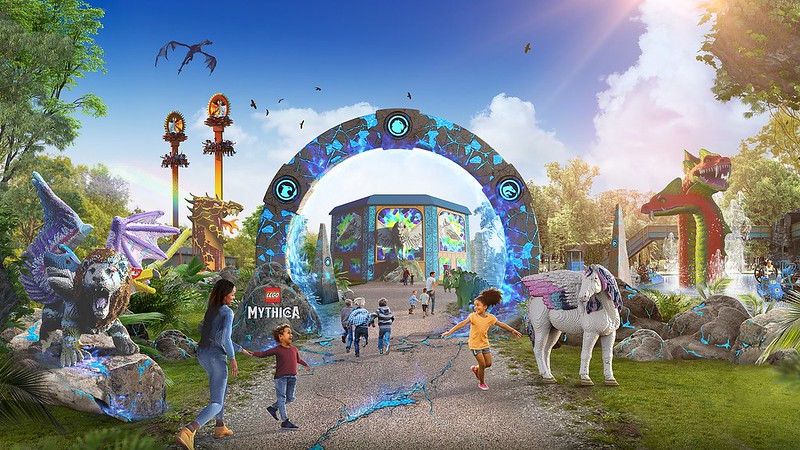 As part of today’s announcement, the Resort has released an incredible artist’s impression showing the other exhilarating new rides and attractions that feature in the land. Standing at 13 metres tall, the equivalent of 325 LEGO Minifigures, are two drop towers named Fire and Ice Freefall, and prepare to get wet on Hydra’s Challenge as guests steer their own vessel on this thrilling water attraction.

Also not to be missed will be the 13 mythical creatures made from more than 1.7 million LEGO bricks by a team of 15 master builders over the course of 8,649 hours, almost a full year of building. Adorning the Flying Theatre building will be the breath-taking model of the Sky Lion, Maximus, made of 685,530 LEGO bricks, weighing more than 5,819 kilogrammes. Using the Resort’s new augmented reality technology, guests will be able to see the mythical LEGO creatures come to life before their very eyes using the LEGOLAND App.

Working in partnership with Kids Industries, the LEGOLAND Windsor team behind the new land spent a year discussing and testing ideas and concepts with seven to 11-year olds and their parents who influenced everything from the final ride experiences, names and characters.

Helen Bull, Divisional Director at the LEGOLAND Windsor Resort, said: “We’re thrilled to be bringing the first Flying Theatre ride to the UK and today revealing all the rides and attractions which will make LEGO MYTHICA: World of Mythical Creatures a must-do experience for families in 2021.

“The whole country has never needed escapism more than they do right now and we’ve worked closely with children and their families to make sure our new land delivers the thrills for everyone, whether it’s their 25th visit to LEGOLAND Windsor or their very first. Subject to Government guidelines, we’re planning to open LEGO MYTHICA on Saturday 29 May and tickets are on sale now to experience the country’s first Flying Theatre as well as everything else the Park has to offer.”

Also set to feature in the new land will be the Creature Creation where guests can build their very own LEGO MYTHICA creatures; an adventure play area called Lava Dragon Play; a character meet and greet experience, Creature Encounter and The Hungry Troll restaurant and Beastly Bites snack bar.

The Resort’s existing 4D Cinema will feature a new and exclusive LEGO MYTHICA film which tells the story behind the mysteries of the parallel universe through the eyes of the loveable BitsandBobs character.

LEGO MYTHICA: World of Mythical Creatures is currently under construction and will be found between Heartlake City and the Resort’s LEGO-themed Hotels.

Day tickets start from £29 per person, kids under 90cm go free. Make a weekend of it by booking an overnight stay at the LEGOLAND Windsor Resort Hotel or the LEGOLAND Castle Hotel with prices starting from £341* for a family of four. To book visit www.legoland.co.uk