The latest edition of Blocks Magazine arrives in UK stores next week and here’s what you can expect to discover in issue 95. In the upcoming new issues, there’s a look at Chevy Camaro, a behind-the-scenes peek at how LEGO City Missions was created and a guide to creating massive models inspired by Hogwarts Castle. The new issue will be arriving with subscribers now and will be available in stores from September 1st. Learn more below. 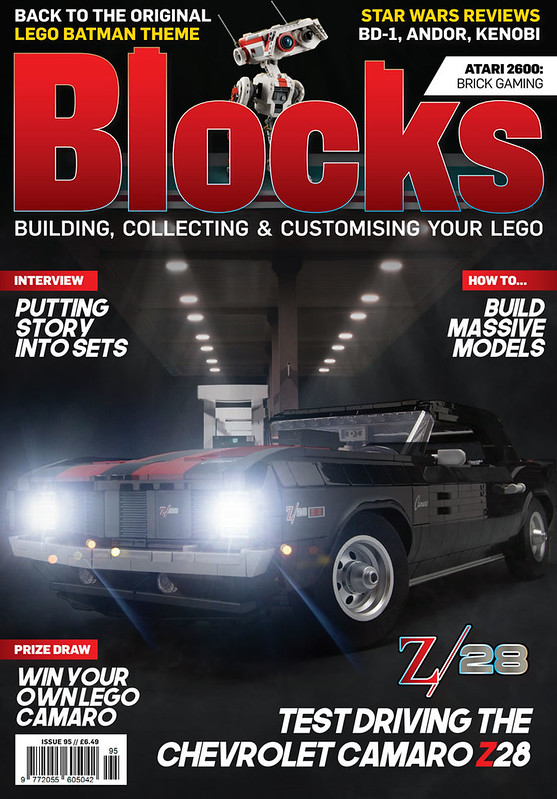 LEGO 10304 Chevrolet Camaro Z/28 1969 goes for a spin around the Blocks magazine test track in Issue 95. There’s also a look at the making of the innovative new City Missions sets and a guide to building massive models using Hogwarts Castle as an inspirational example.

Issue 95 is available worldwide as a single issue or as part of a subscription at blocksmag.com and will be in UK stores from September 1. Everyone who subscribes by October 3 will be in with a chance of winning 10304 Chevrolet Camaro Z/28 1969!

The innovators behind the new City Missions sets reveal how they developed this exciting new concept that replaces instructions with story – find out how this went from a blue-sky idea to something carefully tailored for children, illustrated with never-before-seen conceptual artwork.

That’s not the only interview this month, as outgoing LEGO House CEO Jesper Vilstrup sits down for an extended conversation. As he talks about his 21-year career with the LEGO Group, it makes perfect sense why he was the person to open and oversee LEGO House, Kjeld Kirk Kristiansen’s passion project.

Batman’s back in Blockstalgia, with a look back at the first ever wave of sets inspired by the Dark Knight from 2006. As well as commentary on modern classics, you’ll find an exclusive build – an updated version of 7780 The Batboat.

If you have your sights set on bigger builds though, Blocks has some hot tips for getting that project off the ground. Find out the things you can do to make it easier and the pitfalls you should avoid, through the example of Daniel Konstanski’s show-stopping Hogwarts Castle.

This month’s 116-page magazine also includes the top 10 LEGO dragons, a debate about long minifigure legs, tips for building tents and much more.

Blocks is giving away 10304 Chevrolet Camaro Z/28 1969! To be entered into the prize draw and to get Blocks magazine delivered every month – ahead of the shops – visit www.blocksmag.com and check out the money-saving subscription deals available.

Everyone who subscribes to the print edition by October 3 will be in with a chance of winning (existing subscribers will automatically be entered into the prize draw).