Back in 2009 Christmas became a little more special with the release of the first festive set in the LEGO® Creator Expert subtheme lovely known as Winter Village. Every years since a new set has joined the ranks and helped to inspire builders to create their own festive displays. With the announcement of the Gingerbread House, the Winter Village range marks its tenth set release and its tenth anniversary. But with the Gingerbread House, there’s 11 sets, I hear you cry, indeed there are however, in 2015 the Winter Village set was a re-release of the very first set and it seems LEGO are treating them as basically the same set despite the small changes between both sets. Every Winter Village set is part of the LEGO Creator Expert range, so provide a challenging build and over the last 10 years; have provided a nicely varied range of sets. To celebrate 10 years of the LEGO Winter Village range, it’s the perfect time to cast a eye back over the entire selection of sets. 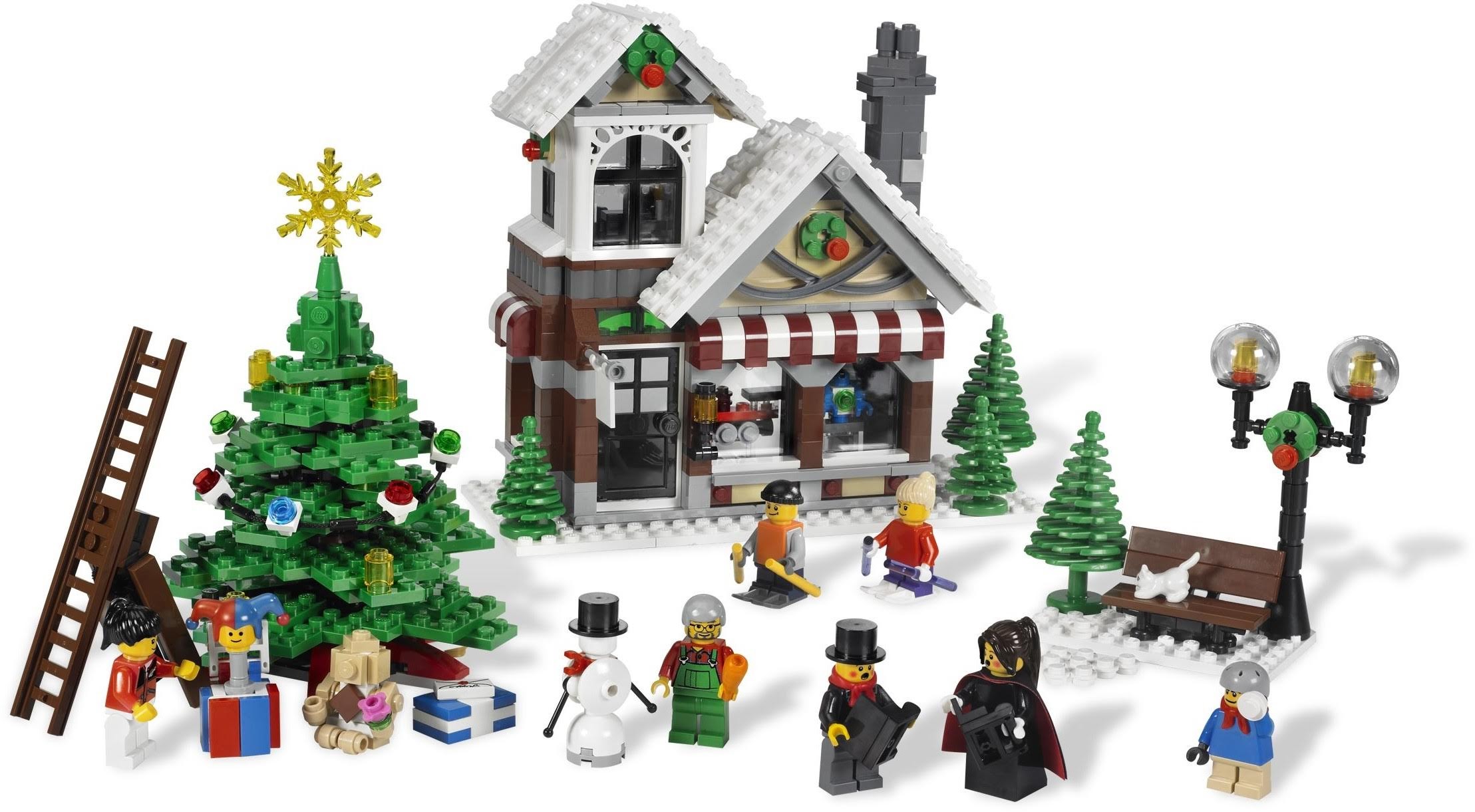 Released back in 2009 the first Winter Village set was a festive toy shop. Along with a quaint little village toy shop, the set included one of the best brick-built Christmas trees I think I’ve ever seen in a LEGO set. Among the seven Minifigures, were two rather cute little carol singers. The set also included plenty of brick-built toys. 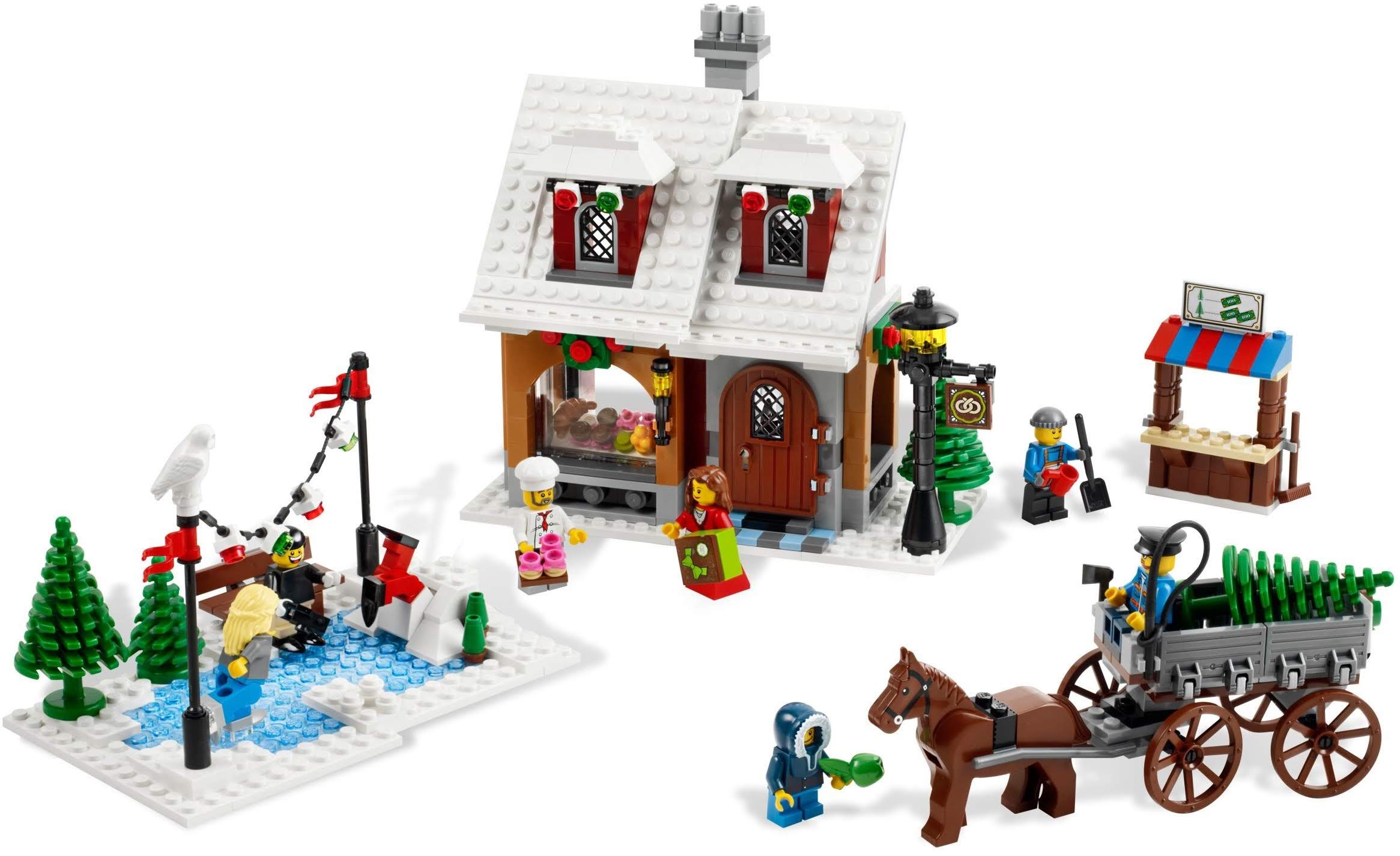 In 2010 the Winter Village expanded to include a bakery. It follows the same style of build as the Toy Shop and also had the addition of a frozen pond, perfect for skating on. Inside the bakery was a fun little Light Brick powered open oven, perfect for baking those festive biscuits and treats.

Toy and treats are all very well but sending letters to loved ones and Santa are just as important. So in 2011 the Winter Village Post Office opened its doors. To keep those posting their letters entertained a festive band played in the included band stand and the traditional Light Brick was used to light up the Post Office window. It was also the first Winter Village set to include a vehicle, with a vintage delivery van.

One of the most colourful Winter Village building would arrive in 2012. The Winter Village Cottage was styled after a medieval cottage, with a fun pale blue and brown beam colour scheme. The vintage vehicles continued with an amazing classic snow plow truck. By now the Light Brick has become an important part of the Winter Village sets, with the one here powering an inviting fireplace, umm toasty. 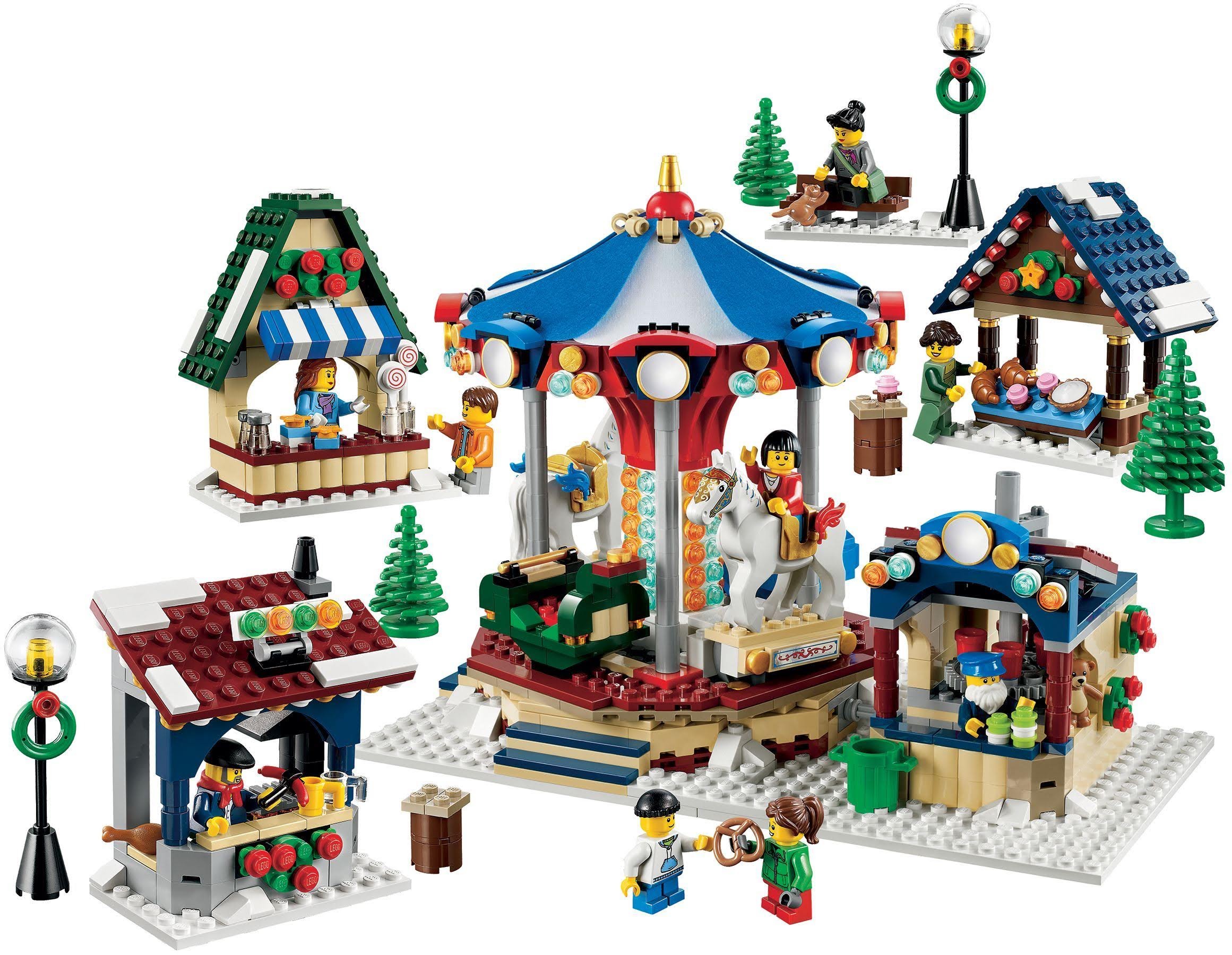 In 2013 the fun of the fair came to the Winter Village, with a slightly different set to previous releases. Instead of a focal point of a building, the set had a great carousel, surrounded by a selection market stalls. One of the best features of the set was a crank system hidden within the stand next to the carousel. Not only did this turn the ride, it also powered the little skill game. The Winter Village Market was one of the first sets not to feature a Light Brick. 2013 would be the first year that an additional two GWP sets were released, which tied into the main Winter Village set. This was also the first Winter Village set to feature the LEGO Creator Expert branding. 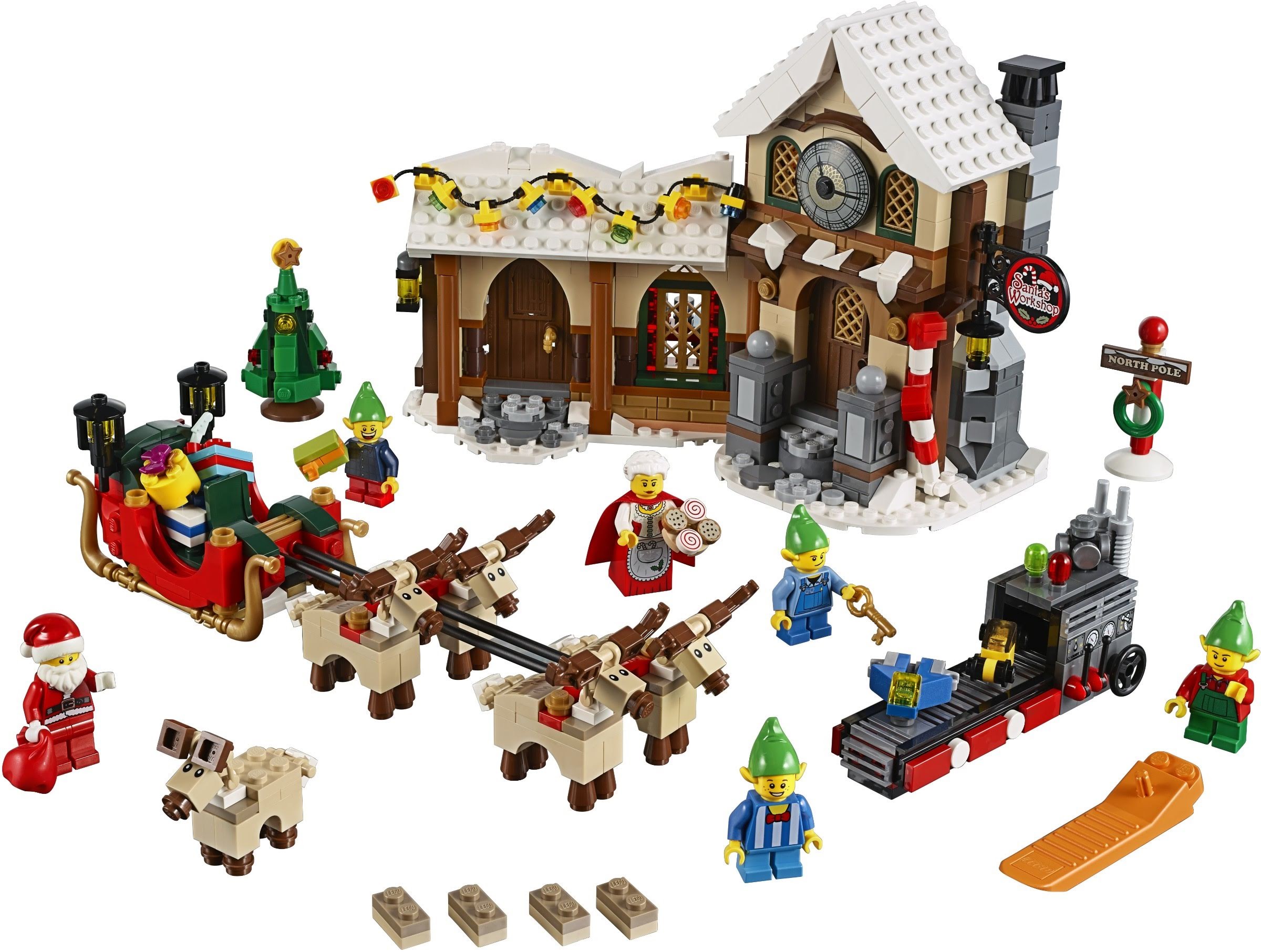 Away from the hustle and bustle of the village, deep within the mountains, a magical workshop could found. In 2014 Santa made his first appearance in the Winter Village. He brought with him Mrs Claus and a team of hardworking elves. Plus that all important magical reindeer-powered sleigh. Like the previous year, an additional set was created, which added a small elves workshop. 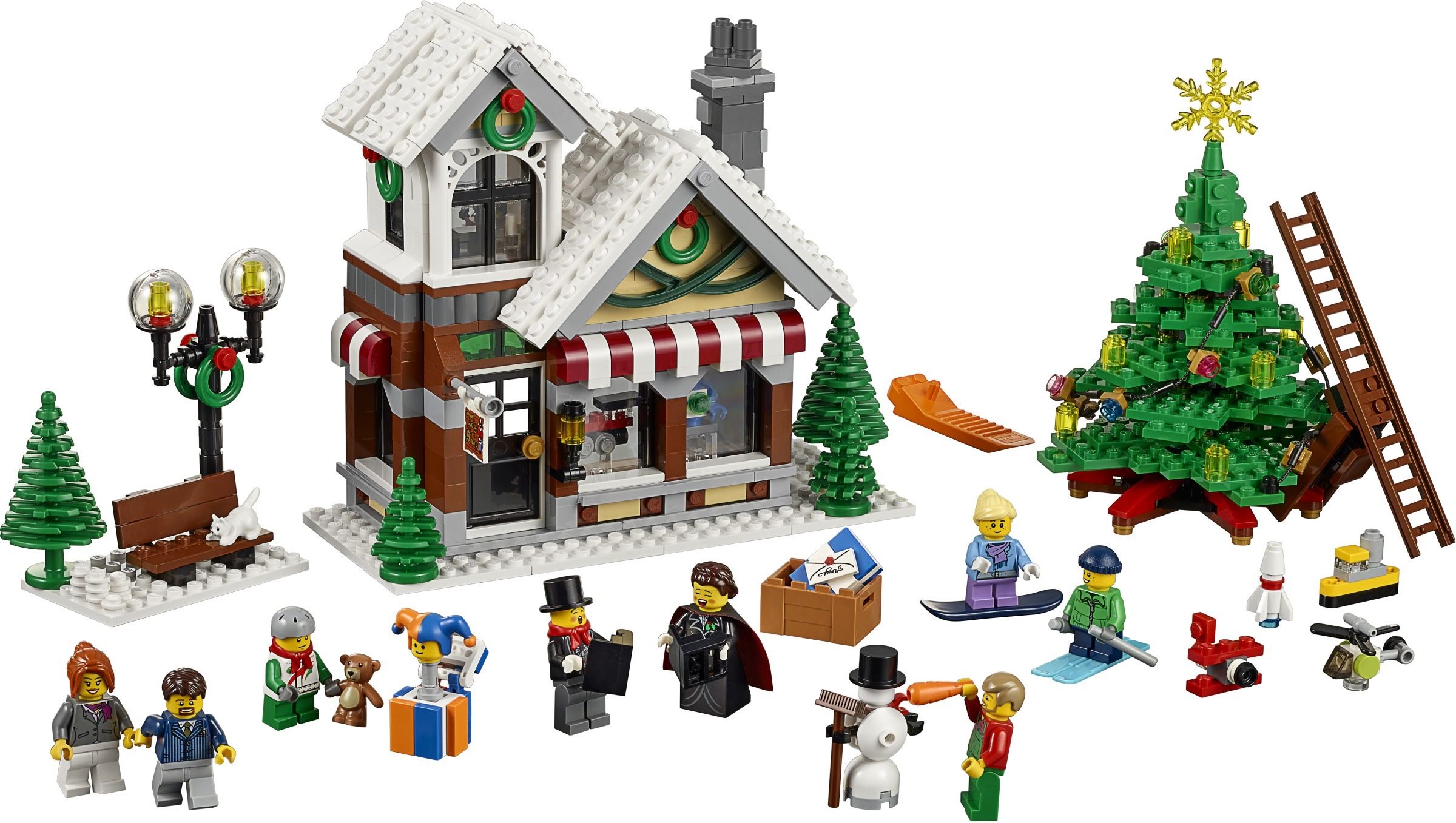 For the seventh Winter Village set, the range when back to where it all began with a re-release of the Toy Shop. Although basically the same exact set, there were a few tweaks to the design and a few different elements used. Piece count jumped 83 elements from 815 in the 2009 edition to 898 pieces in the 2015 version. Due to the almost exact same build, this isn’t classed as an additional new Winter Village set.

For as long as there have been Winter Village sets and Christmas LEGO displays, people have enjoyed adding trains to their festive scenes. Until 2016 these would be other LEGO sets or MOCs. For this years Winter Village set, the action moved away from buildings for the first festive train. The train had two carriages, one for passengers and the other filled with presents and a Christmas tree, which would spin as the train moved along. The trains coal carriage could be converted to house additional Power Functions to bring the train to life with automated movement. But trains need somewhere to stop….. 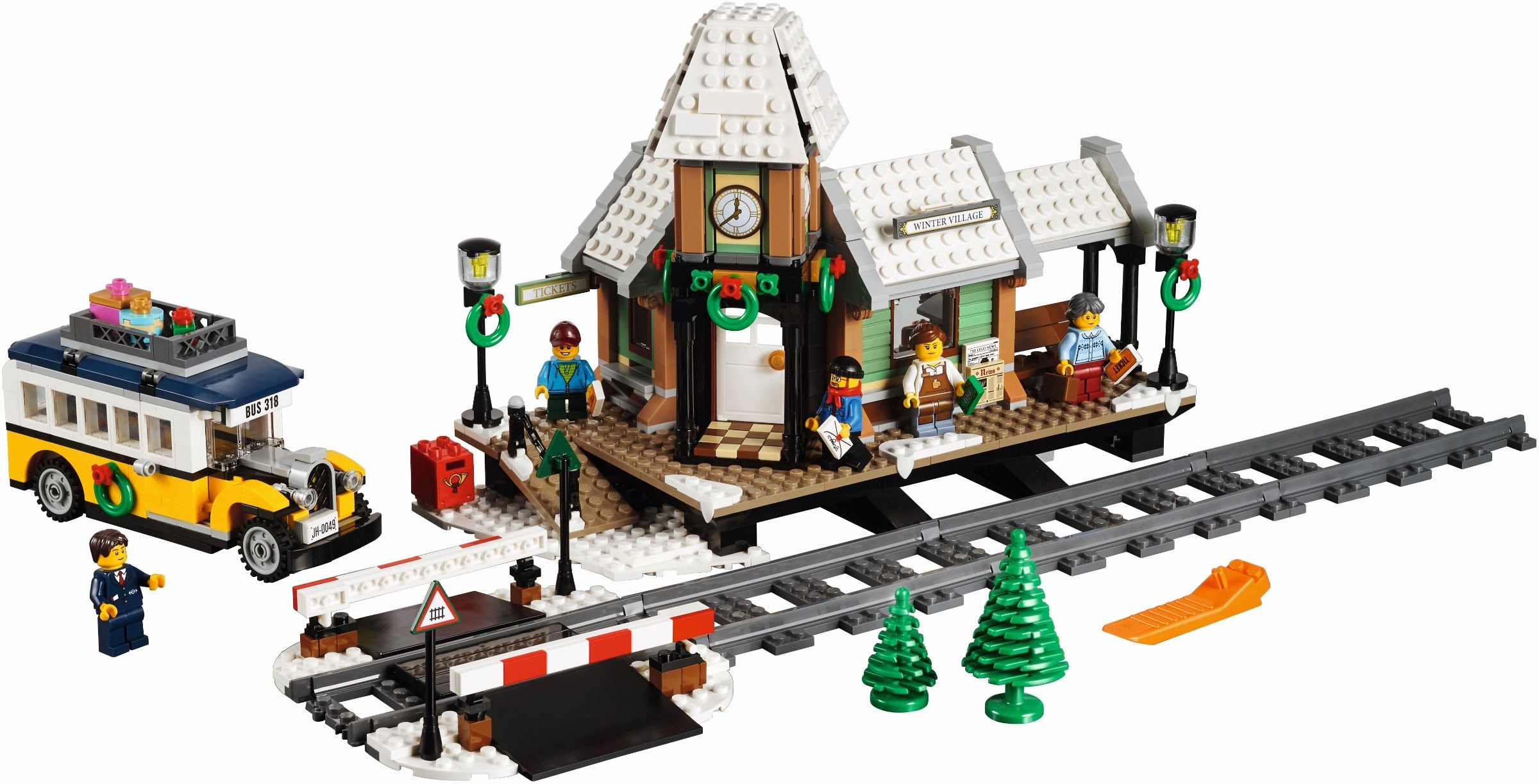 Although the Winter Village sets are considered a collective sub-theme, the sets haven’t really had a direct connection, that is until the 2017 release. The Winter Village Station had a direct connection to the Winter Holiday Train, it had a section of track and level-crossing, which could be connected to the track from the previous years set. Although not as colourful as the Winter Train, the set had some great build techniques to achieve the oddly positioned clock tower entrance to the station. The Winter Holiday Train was also brought back to stores, for those who missed out on it first time around. 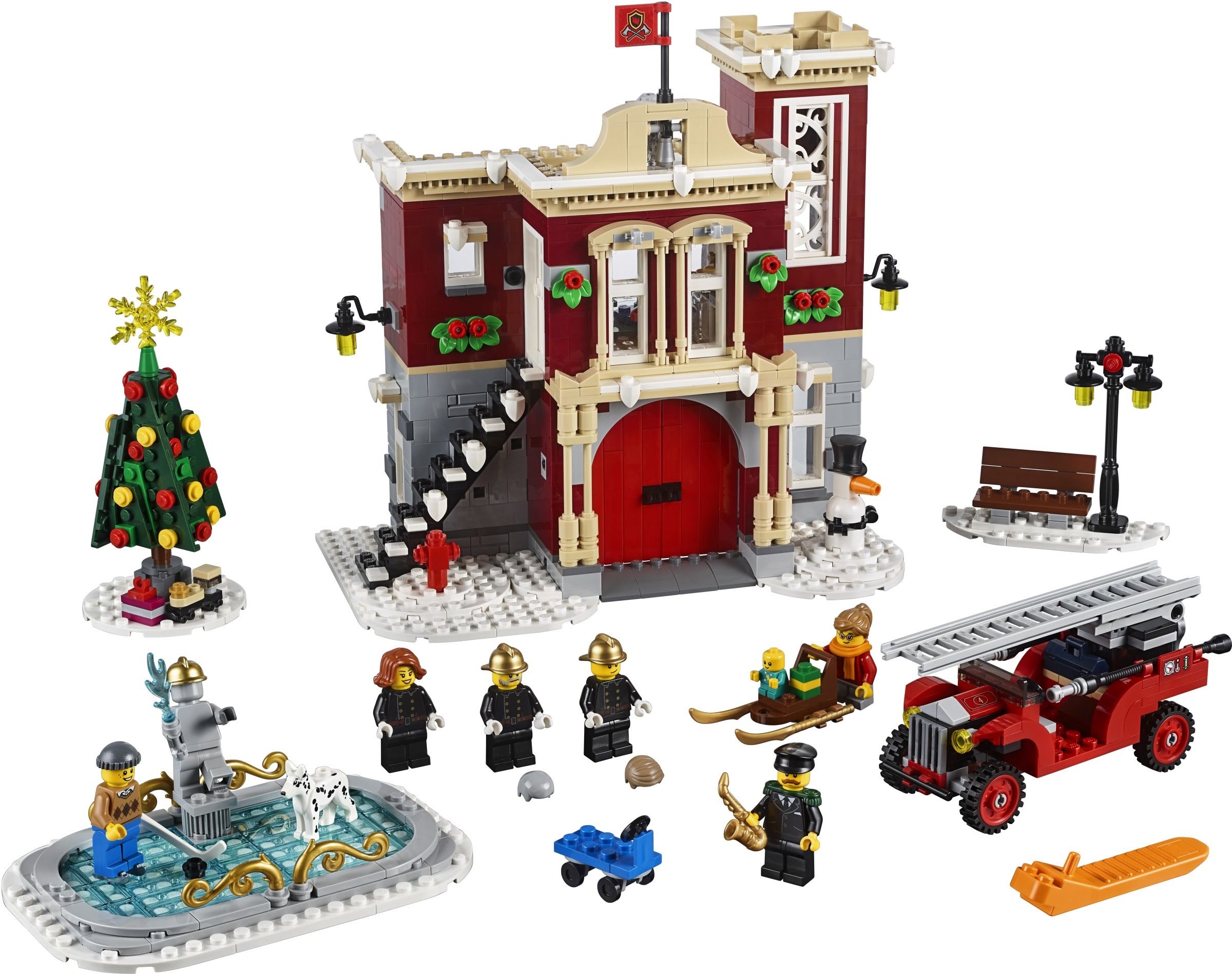 One of the running traits within the Winter Village sets, were classic style buildings, which was perfectly captured in last years set. Although fire stations aren’t the first things you think of at Christmas, the building and it’s vintage fire engine were a nice addition to the range. As well as continuing the classic style building, the 2018 set also saw the return of the Light Brick. The Winter Village Fire Station can still be found at John Lewis & Partners. 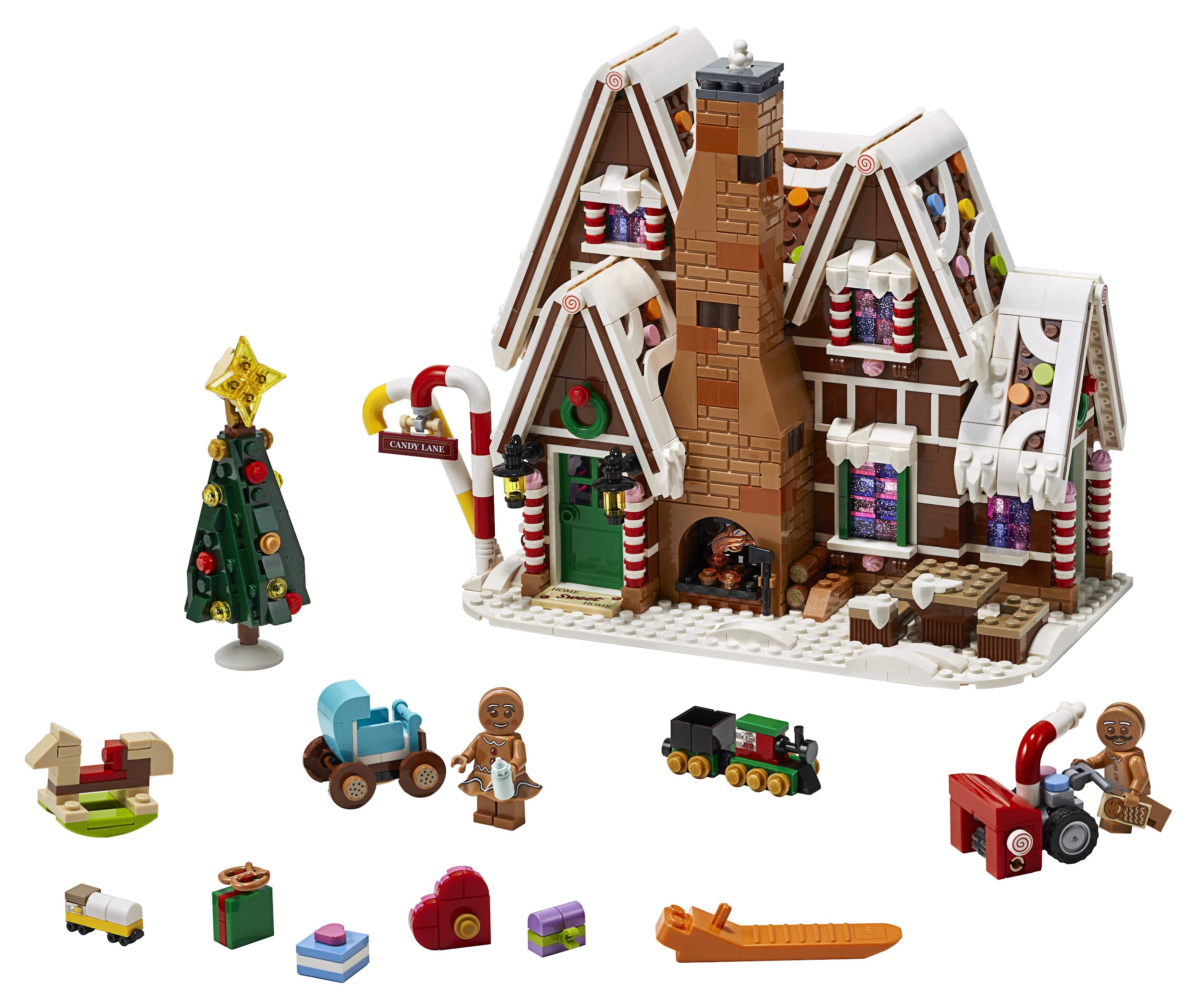 Which brings us nicely up to this years Winter Village set. The Gingerbread House will be released on October 1st or if you’re a LEGO VIP member, you’ll be able to pick the set up from LEGO Stores and LEGO.com from September 18th.