A Look At LEGO…. Fairgrounds

With the announcement of a new LEGO® fairground set, I thought it was the perfect time to take a look at some of the other sets which are part of the same style of sets. Most of them are a sub-theme of the Creator Expert line, although the Haunted House is part of the new ‘AFOL’ line. There are also a couple of LEGO City sets with a fairground twist. Plus sets from the Creator 3-in-1 and Hidden Side themes. There are many others, including an entire fairground sub-theme for LEGO Friends. But for the latest, A Look At LEGO…. feature I’ll only focus on the main few sets.

The Grand Carousel kicked thing off way back in 2009, a time before even Creator Expert existed. The set was modelled after a classic fairground ride and featured Power Function elements to make it go-round at the flick of a switch. It was a highly detailed set and inspired a future Creator Expert set. 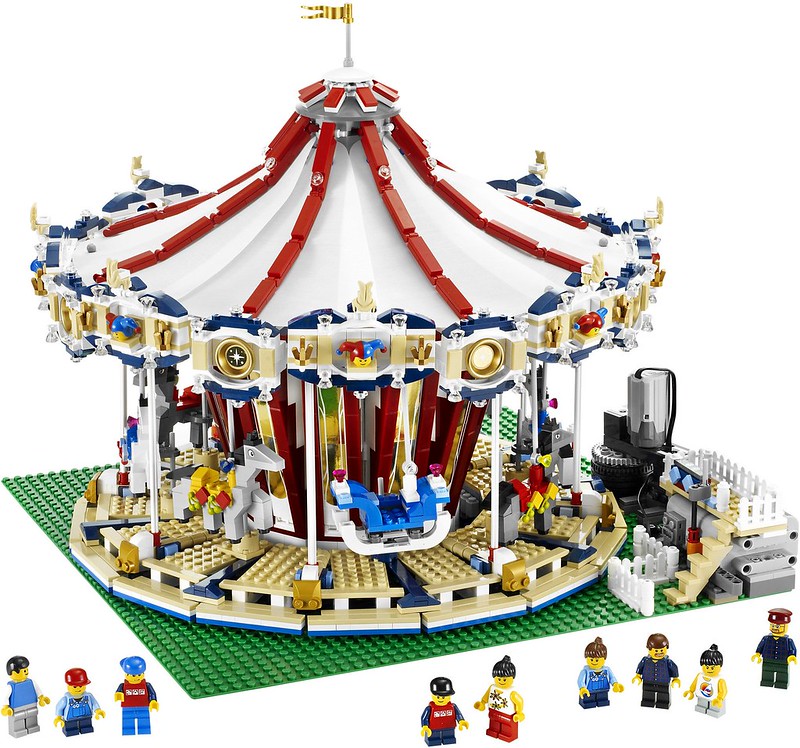 The Mixer was the first set to feature the original Creator Expert branding and set the style of many of the other sets to follow in the sub-theme. The Mixer is another classic ride often found at travelling fun fairs, it even included a truck to pack the ride around and transport it to another location. Power Functions could be added to make it move. 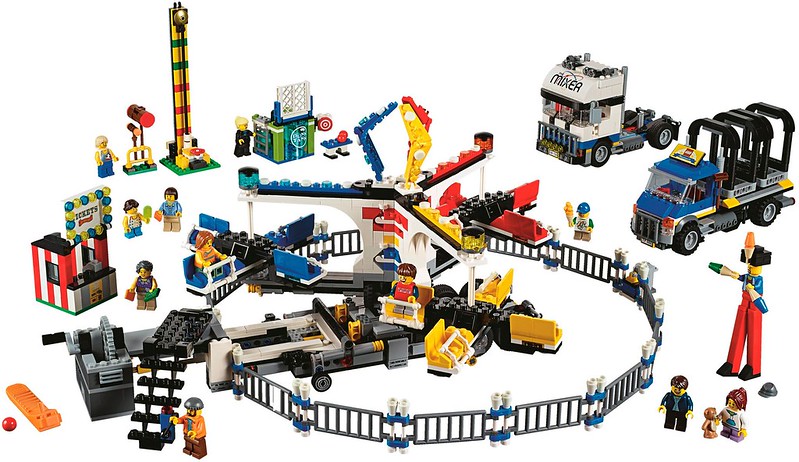 The Ferris Wheel kicked thing up a notch in 2015, this towering set was a spectacle to look at and captured the magic of the big wheel perfectly. Like all other Creator Expert Fairground-themed sets, it featured an impressive system to make it work just like the real rides would. It could also be automated with additional Power Function elements. 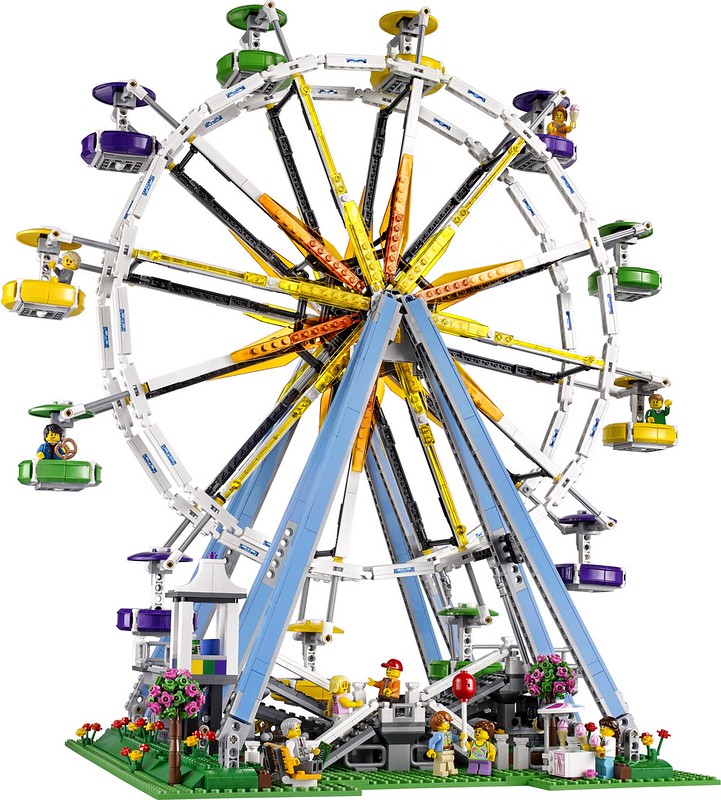 When the Fairground sub-theme was established with the release of the Mixer and Ferris Wheel, the Grand Carousel soon became extremely sought after. Which could be why the next Creator expert Fairground ride was another Carousel. Although it followed a similar design style, it was a completely different set and a little more ornate, thanks to the gold elements. The tradition of Power Functions was also an optional extra. 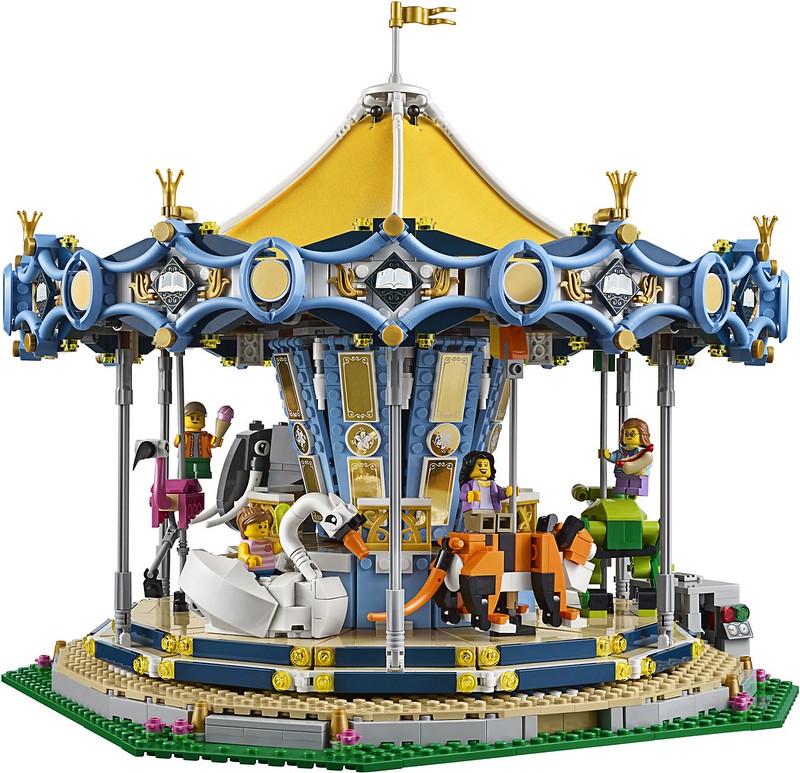 In 2018 the most ambitious Fairground ride was tackled. Roller Coasters aren’t the easiest things to build. The need to be big and they need to work. Both of which were achieved with the first proper LEGO coaster, it even uses a brand new track element, which opened up the style of ride for other sets. The set also had the option to use the new Power-up elements, these smart device control elements also added music and sound effects, thanks to the Powered-up app. 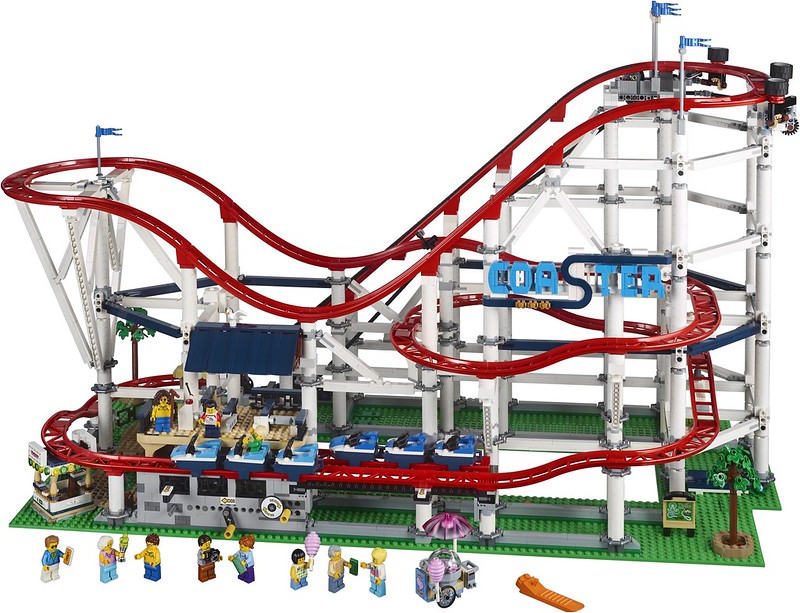 Away from the Creator Expert range, LEGO City has also been having a little fun at the fair, with a fun fair-themed People Pack. This Minifigure-focused set featured a couple of fairground side attractions and plenty of Minifigures to ride any of the other LEGO fairground rides. 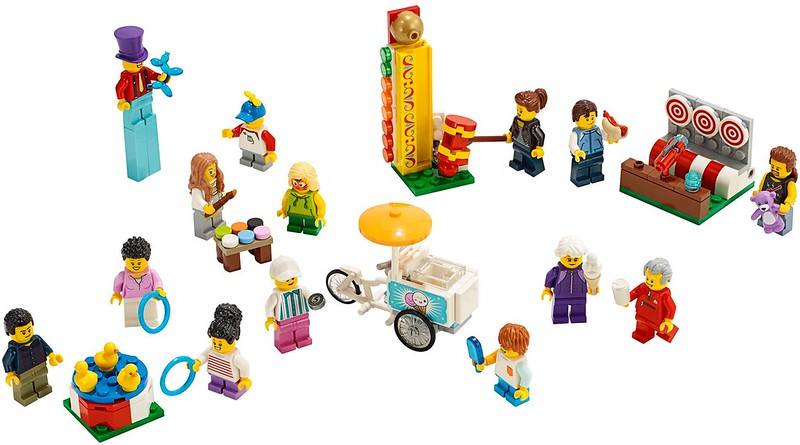 On a slightly smaller scale than the People Pack, the Fairground Minifigure Accessory Pack may only feature a couple of Minifigures and a shooting gallery game, but it’s a great little set should you be constructing your own Fairground. Plus who wouldn’t want Ron Swanson to visit their LEGO fair? 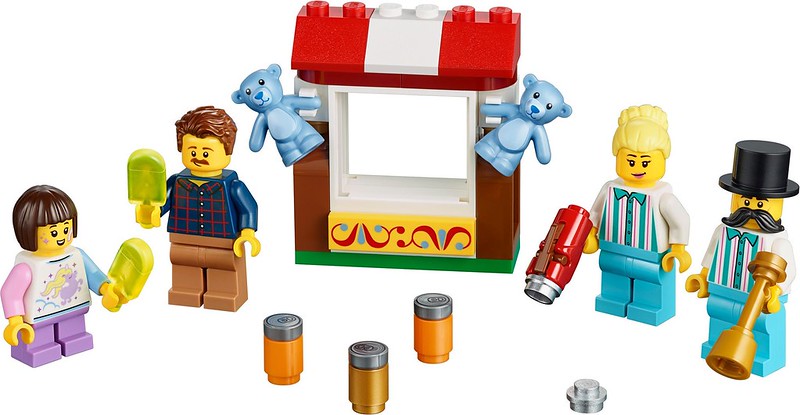 What could be a better than a pirate-themed roller coaster? One which you can rebuild into two other rides of course. The simpler Creator 3-in-1 range may not be as advanced as the Expert range but this little set is a fun looking ride, which would easily be found at a fairground. 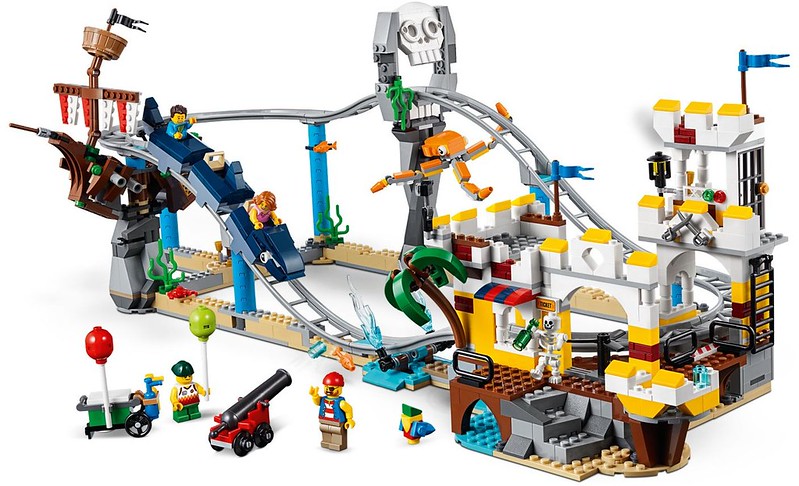 Another Creator 3-in-1 set to have a fairground theme is another carousel. This is a much smaller one and features a UFO theme to it. It can also be rebuilt into two other variations. It also nicely fits the same style of other sets from both the Creator Expert and LEGO City sets. 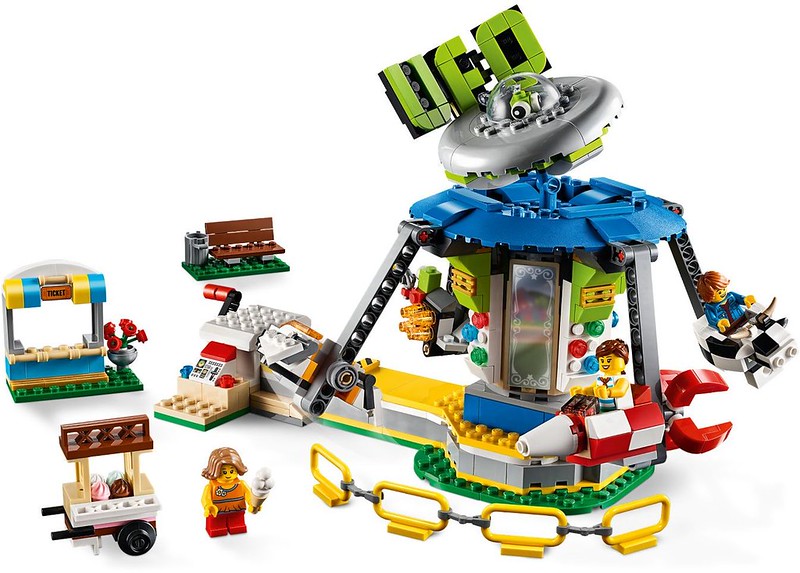 Over in Newbury, things are getting a little spooky at the local fairground. The set may only be small compared to other rides, but it looks fun enough to fit in with other fairground sets. The set uses the new Coaster track to create a simple but working ride and a small scale drop ride. 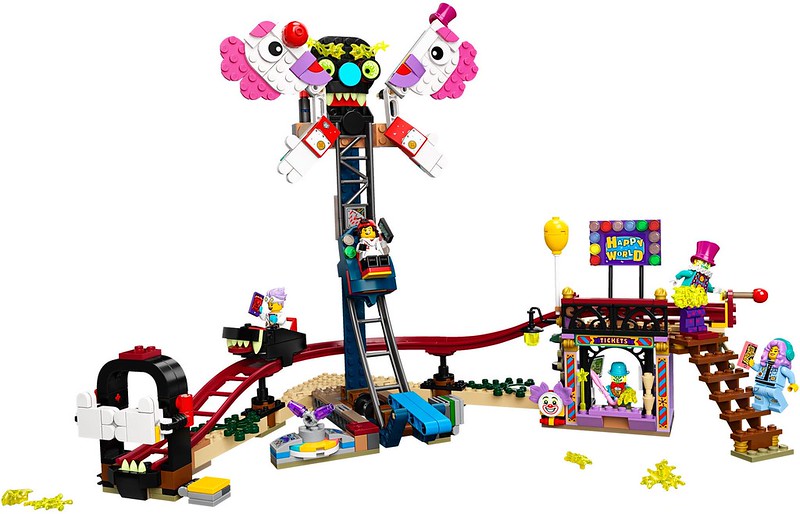 Which leads us nicely to the latest addition to the expert line. Although no longer dubbed Creator Expert, it’s essentially part of the same line. Unlike other outdoor rides, this features an enclosed drop-tower but continues the formula of complex working mechanism and the ability to be powered with additional elements 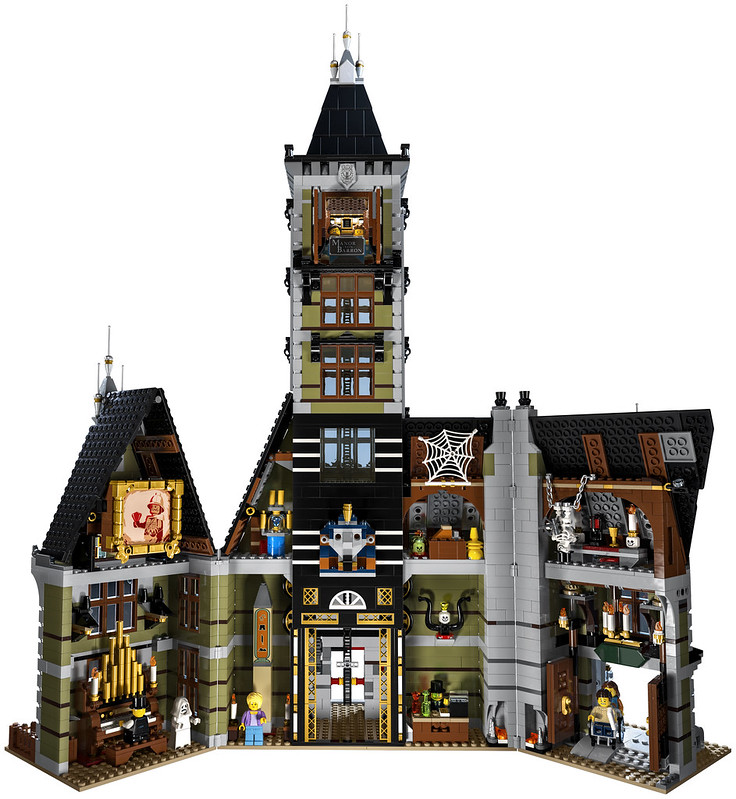