Seasonal sets have long been a part of the LEGO® landscape. Most major holidays have been celebrated with a set of some sort. Christmas received the most focus, which led to the long-running and extremely popular Winter Village line. With an ever-increasing focus on the Chinese market, in 2019 sets similar to the Winter Village range were introduced based on traditional Chinese Festivals. Although these have been available for a few years now, I’ve just built my first, the Story of Nian.

Based on a traditional Chinese fable, this set tells the tale of Nian. This dragon-like lion creature would leave its mountain lair to attack the villages on the eve of New Year. Soon the villagers discovered they could ward the monster away with the colour red and the bright explosions of fireworks. That’s a lot of things to portray in a single build. So does the Story of Nian pull it off? Let’s find out. 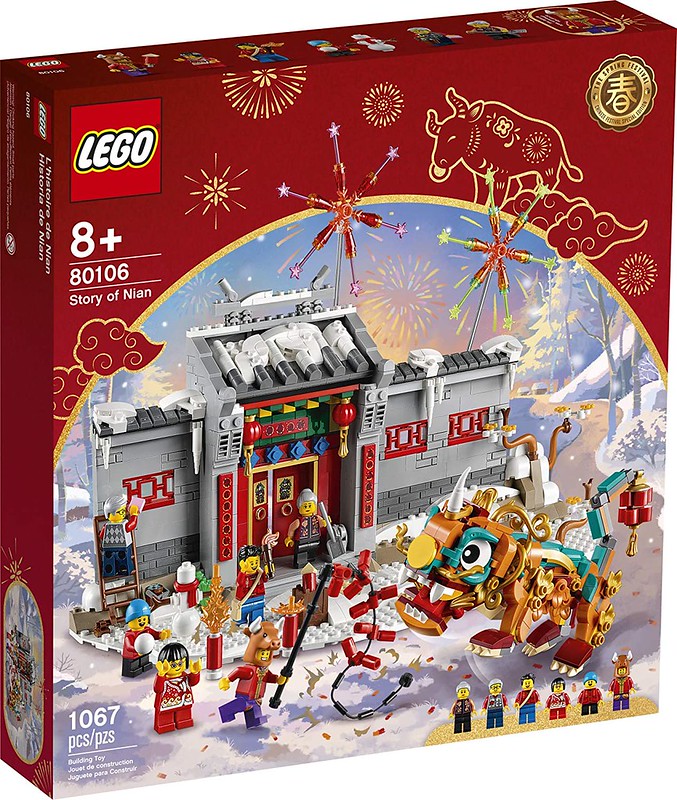 Make Lunar New Year celebrations even more playful for kids as they recreate the Story of Nian with this colorful LEGO® building set (80106). It features a brick-built Asian residence with traditional decorations including buildable fireworks, firecrackers, hanging lanterns and Chun Lian banners, plus 2 cabbage elements and warrior guardian stickers to ward off evil spirits.

For display and role-play fun
The snowy scene is brought to life with a posable Nian creature, a snowman figure and 6minifigures, including grandpa, grandma, 3 children and a person in an ox costume to mark the Year of the Ox. There are also lots of accessory elements for spring-cleaning and telling the legend of Nian in LEGO style. 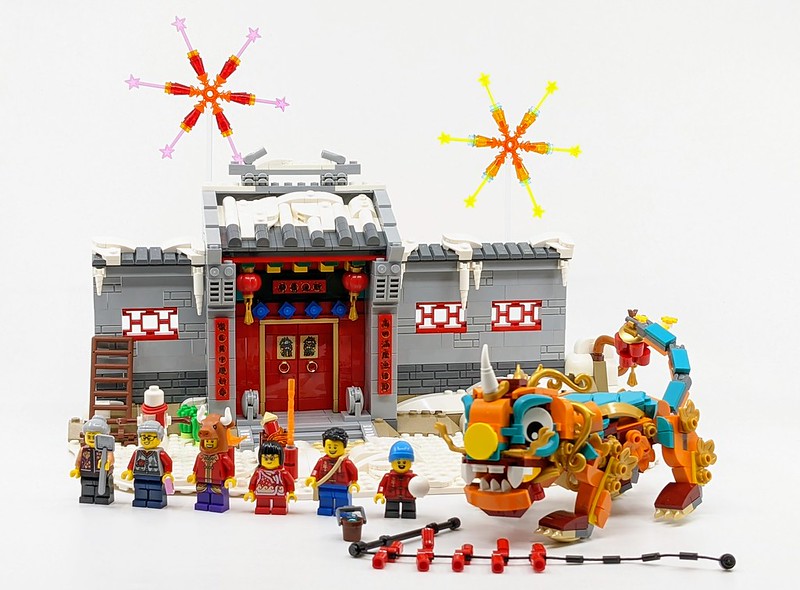 The set features a section of wall, which I assume surrounds a village and acts as a means to keep the monster at bay. Unusually for the CNY sets, this one features a dabble of snow. The use of various elements to capture snowdrifts and icy dips gives the set a sense of texture. But the most impressive details are found on the section of the wall, in particular the ornate gates. As the fable tells, the Nian is scared of the colour red, so the gates and the intricate wooden slats built into the wall are all coloured red. I really like the details around the gate frame. A mix of offset 1×1 plates and other 1×1 elements layered, resulting in a very Oriental looking design and once filled with complimenting colours. 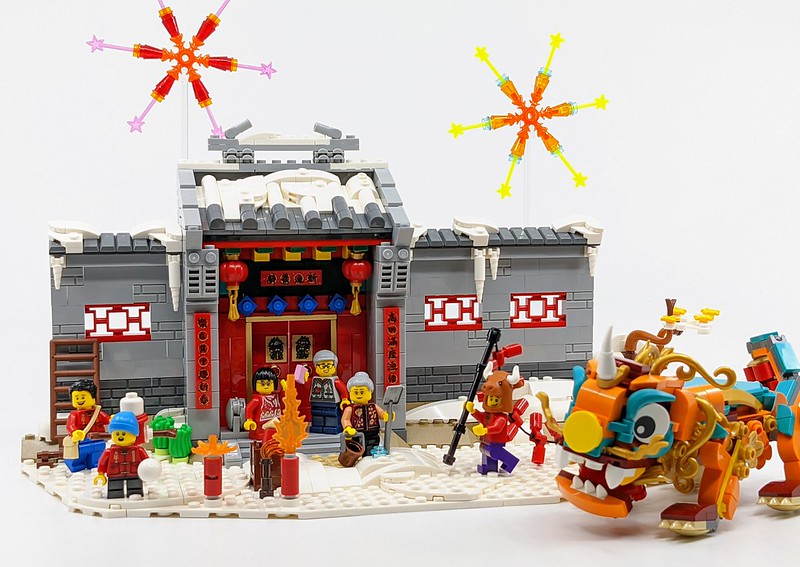 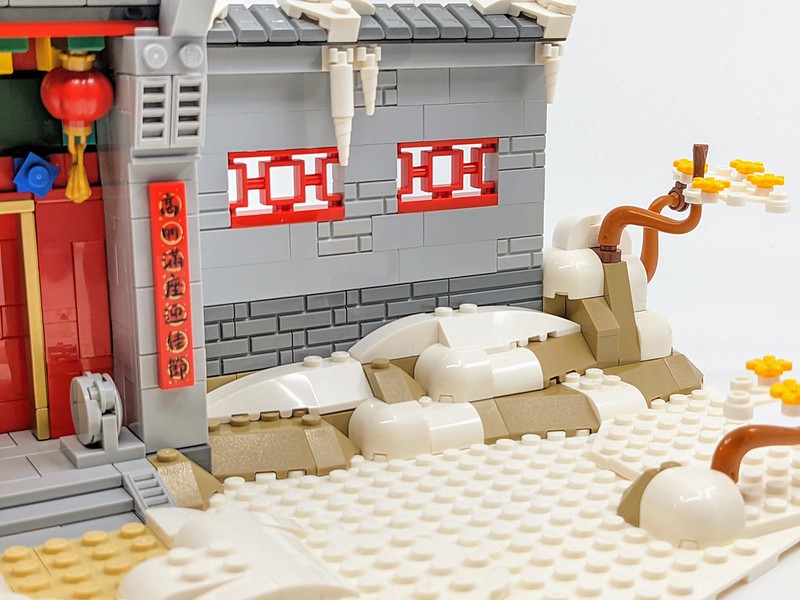 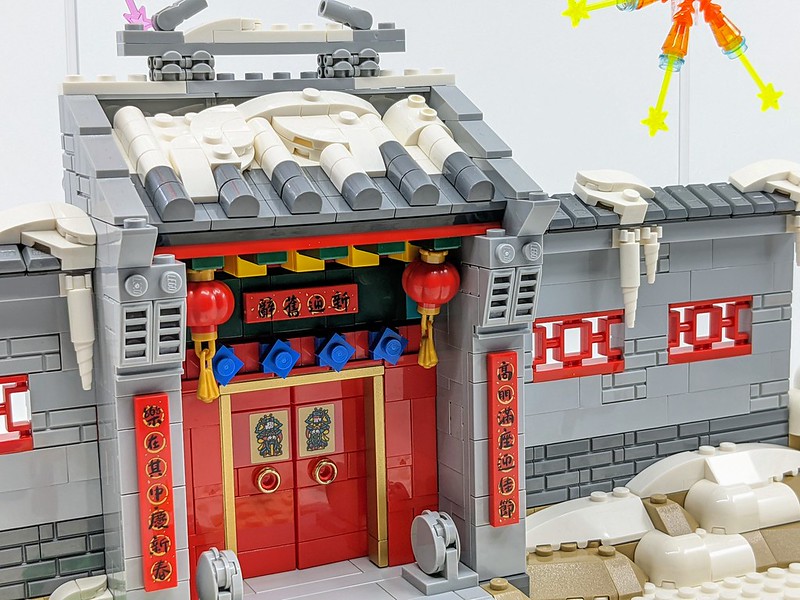 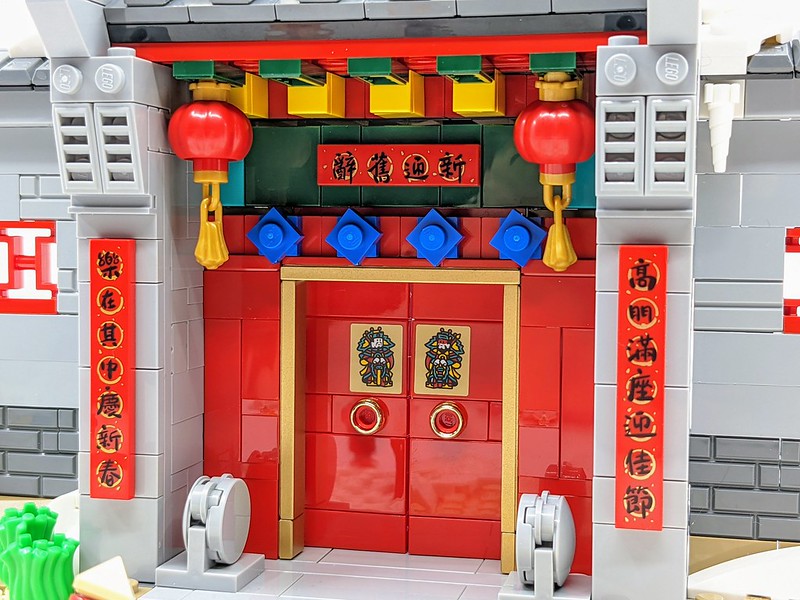 I always enjoy it when elements created for one use are repurposed for another. So the two green mop tops found near the wall made me grin. They are obviously plants, which the set description suggests are cabbages. As well as this little veggie patch, the area in front of the wall is filled with various details including boxes of fireworks. A couple of them are also being set off. These use the new power blast elements found in many of the superhero sets and are surprisingly effective for showing a firework igniting. 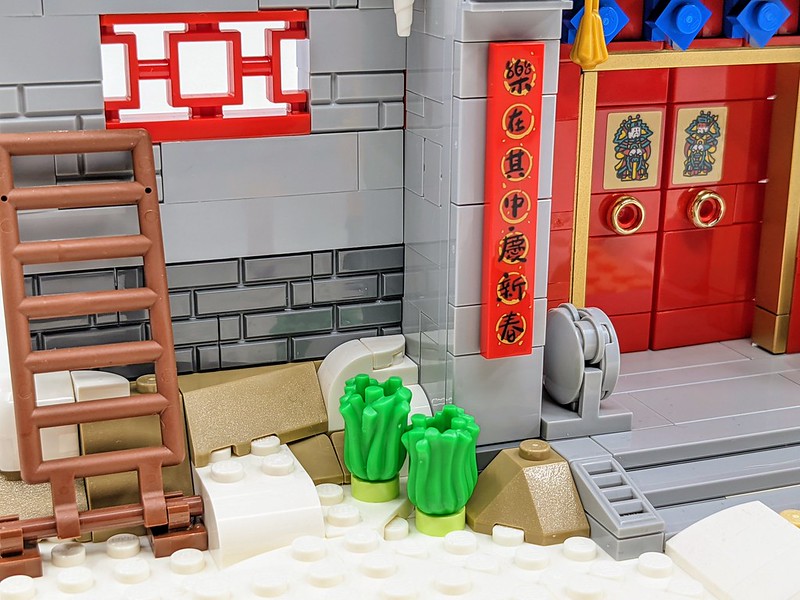 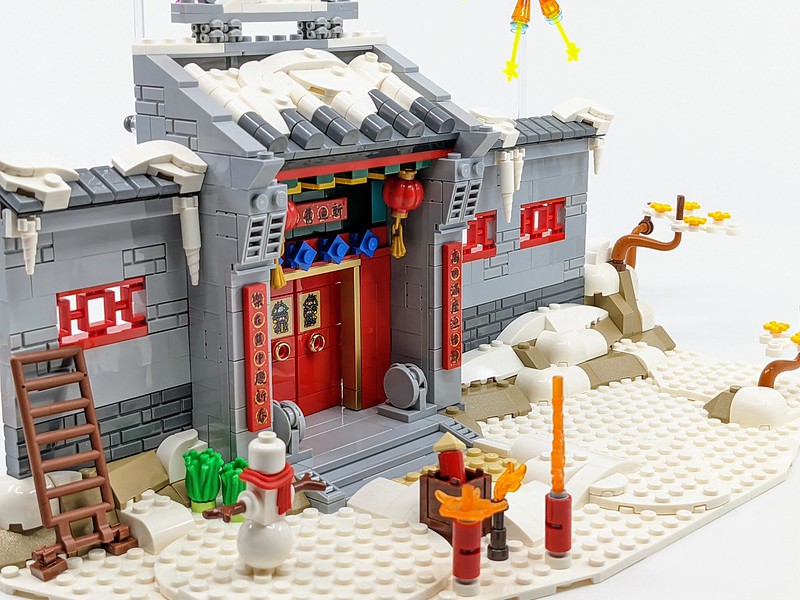 Sticking with fireworks, the set offers the best take on those colourful explosions ever to feature in a LEGO set. Using a recoloured version of the snowflake elements, the bright blasts of colour look amazing sitting above the wall. They are mounted on transparent rods to give the sense of being set off in the sky and the use of various transparent elements including star wands works amazingly well. 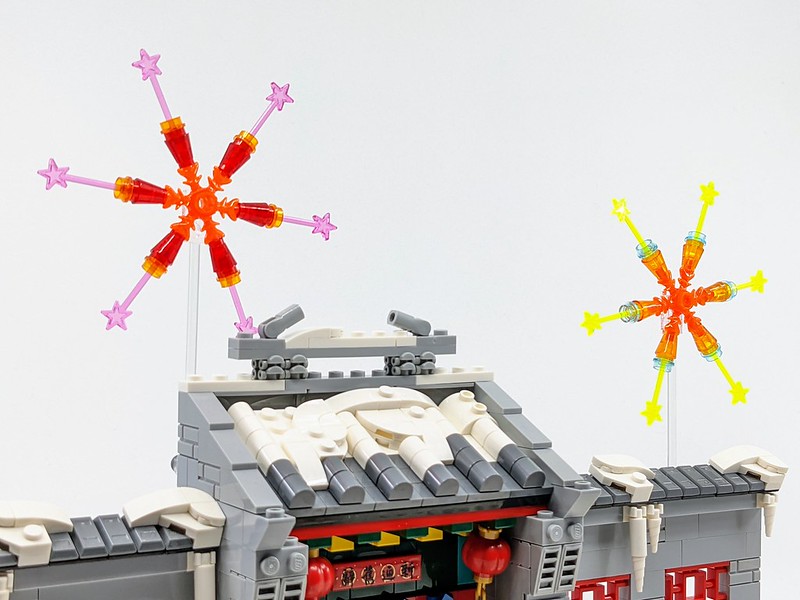 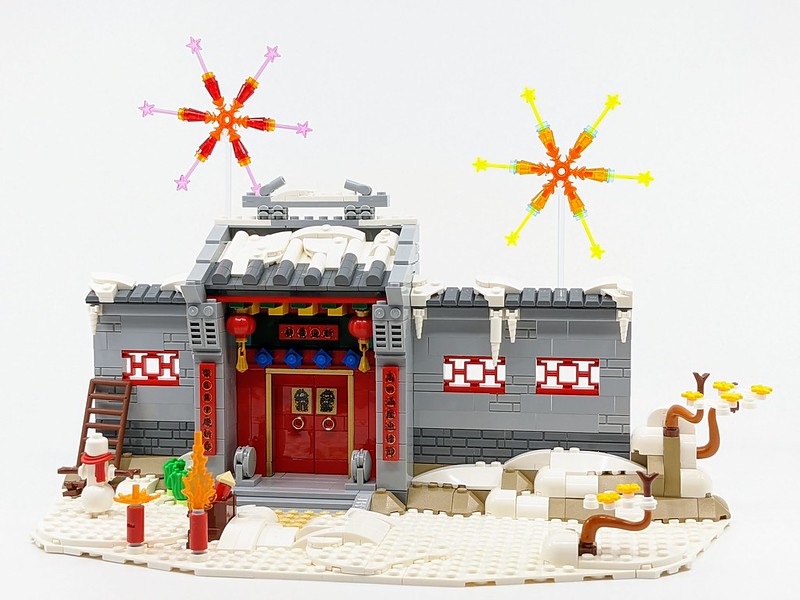 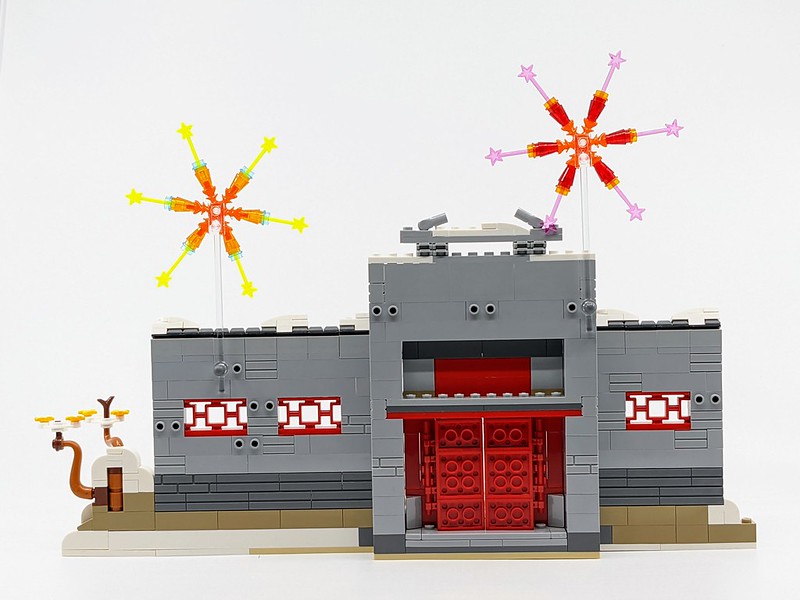 The Story of Nian wouldn’t be complete without its monstrous namesake. Nian has a very similar appearance to the lion creatures featured in many facets of Chinese culture. The most recent LEGO creation was in the Monkie Kid set featuring the Lion Guardian. The creature included here is much smaller but equally detailed. If you are unfamiliar with the appearance of a Chinese lion, you will have probably seen one. They are commonly associated with the wild dancing creatures featured in street parades. At first glance, they don’t look like what you would assume is a traditional lion. I love the colours and elements used to create the creature, especially the recoloured bananas around the eyes. 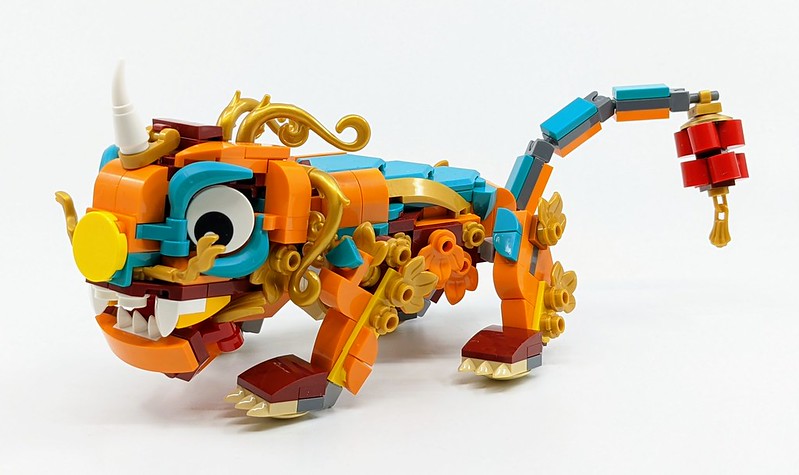 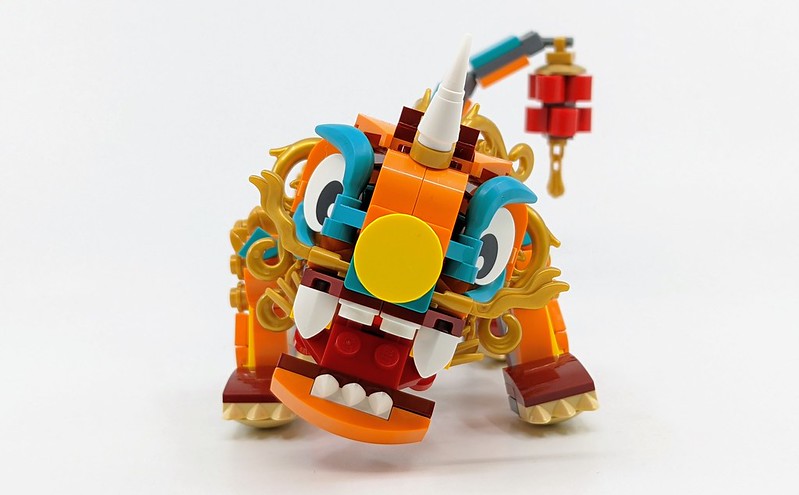 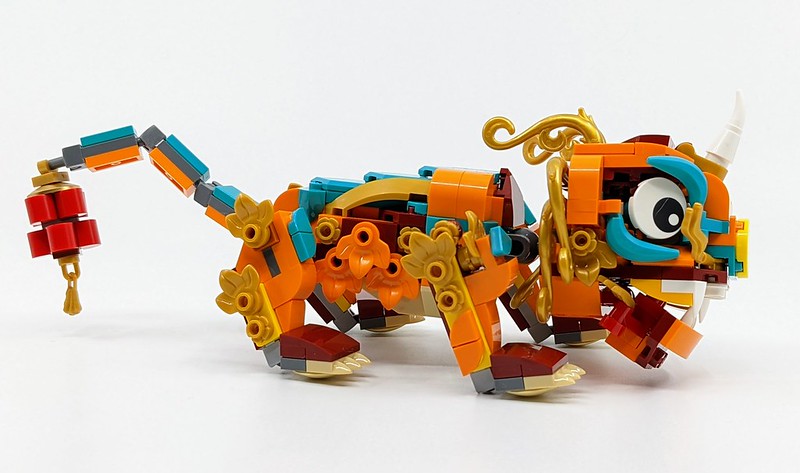