Long before the first LEGO® Jurassic World set was released, fans have been keen to see iconic moments from Jurassic Park transformed into LEGO sets. Those famous green, yellow and red Ford Explorers have been a keen source for MOC builders and LEGO Ideas projects. Apart from the Raptor Attack set for a couple of years ago and the huge Jurassic Park T. rex, the original films haven’t had much LEGO love. But that’s about to change with the upcoming LEGO Jurassic Park T. rex Breakout. An adult-focused build inspired by the moment Alan Grant, Dr Ian Malcom and the kids are attacked by a T. rex. It’s similar to the recently revealed Star Wars Dioramas, which offer an advanced build experience to create a unique displayable set. So here’s a look at the LEGO Jurassic Park T. rex Breakout Diorama Set. 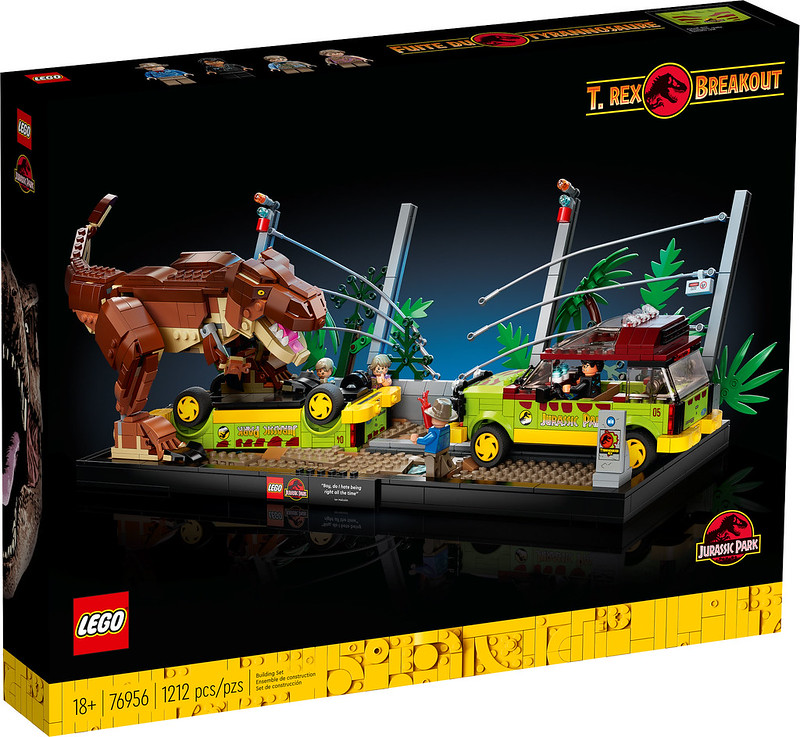 Ready to direct the action? This LEGO® Jurassic Park T. rex Breakout build-and-display model (76956) is as worthy of repeat viewing as the epic Jurassic Park movie scene that inspired it. It features a posable T. rex figure stomping on a flipped, crushed Ford Explorer, a second Ford Explorer and a smashed ‘electric’ fence. Recreate the drama with Alan Grant, Ian Malcolm, Tim Murphy and Lex Murphy minifigures, buildable night-vision goggles, a flare and 2 water glass elements, plus many other references to the famous scene.

Delightful gift
This collectible model makes a super treat for yourself or a gift for other adult Jurassic Park fans and experienced dinosaur-loving LEGO builders. It comes with step-by-step instructions, so you can relax and enjoy your nostalgic creative journey.

Unbox and unwind
Welcome to LEGO sets for adults – a zone of zen for hands-on DIY projects. From movie magic to the wonders of the world, pop culture icons and more, there is a LEGO set waiting for you. 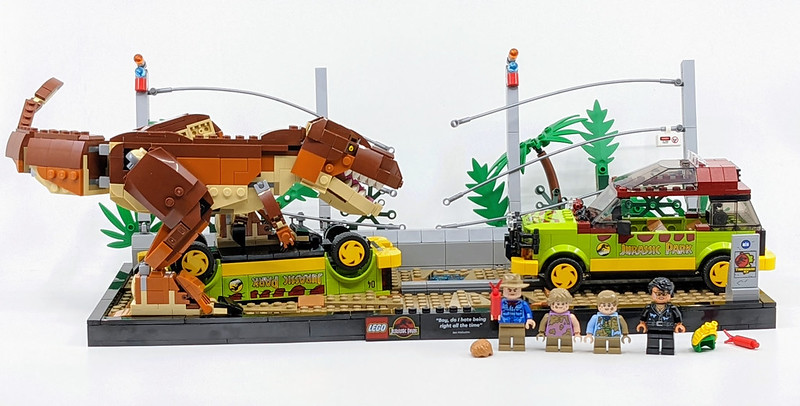 The similarities between this set and the Star Wars Dioramas are quite obvious. Both have a black-bordered base, a display plate featuring an iconic quote and a buildable scene inspired by a moment from a movie. But that’s where the two themes take on a LEGO diorama ends, as they both offer vastly different build experiences. The set is split across 9 bags, as well as an additional bag of larger elements and there’s also a sheet of quite a few stickers. The instructions offer a little something beyond merely the building steps as you get a little extra information about the Design Team beyond it. Another nice touch can be found as you build the set. Certain aspects of the build are obviously inspired by key moments from Jurassic Park. These are highlighted and a little more information about them and the movie prop are provided. 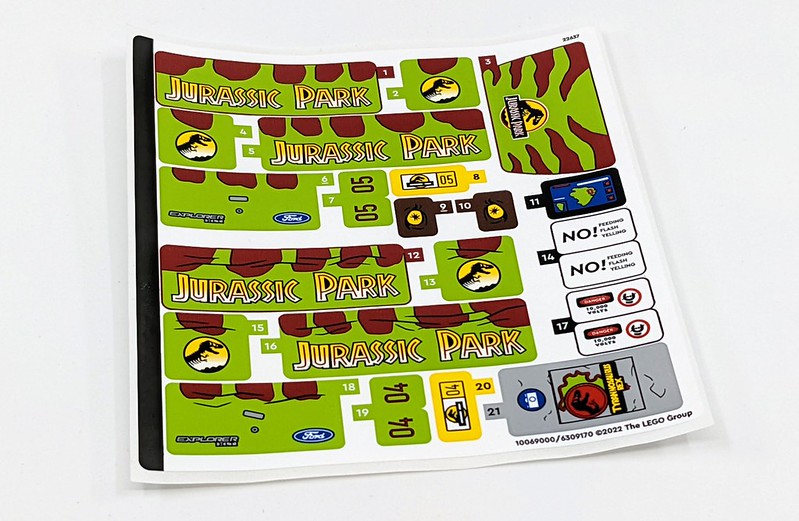 The build begins with an iconic part of the movie and something fans have been keen to see in LEGO form for a long time – the Jurassic Park Ford Explorer. They are used in the park to take visitors on a guided tour around Isla Nublar. With the systems shut down, the tour being taken by Lex, Tim, Alan Grant and Ian Malcolm abruptly comes to an end before coming face to face with a fearsome T. rex. The 4×4 is basically like a vehicle you’d find in a LEGO City set, with a 6 stud wide-scale perfectly suited to holding 4 minifigures as well as match the size of the scene overall. All the graphic detailing is unfortunately achieved via stickers. It’s a shame the ‘no stickers’ route of the Star Wars Dioramas has been implemented here. Despite the stickers, the Explorer looks great and features a couple of nods to moments in the film including the night vision visor, glass of water and the torch. 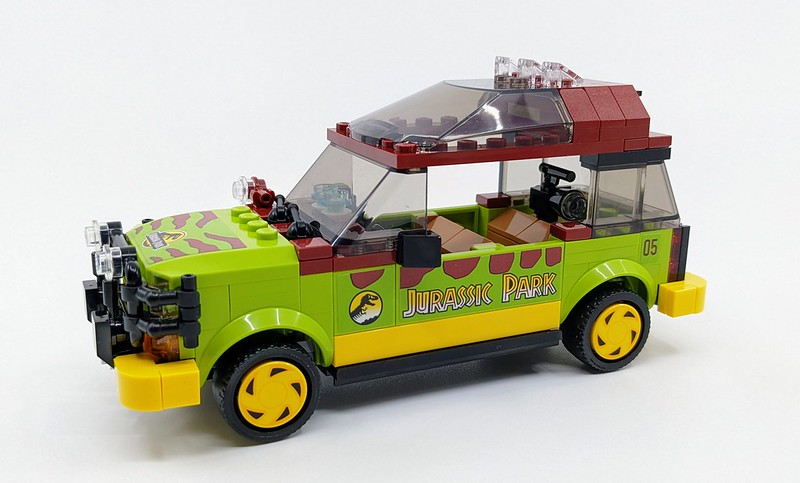 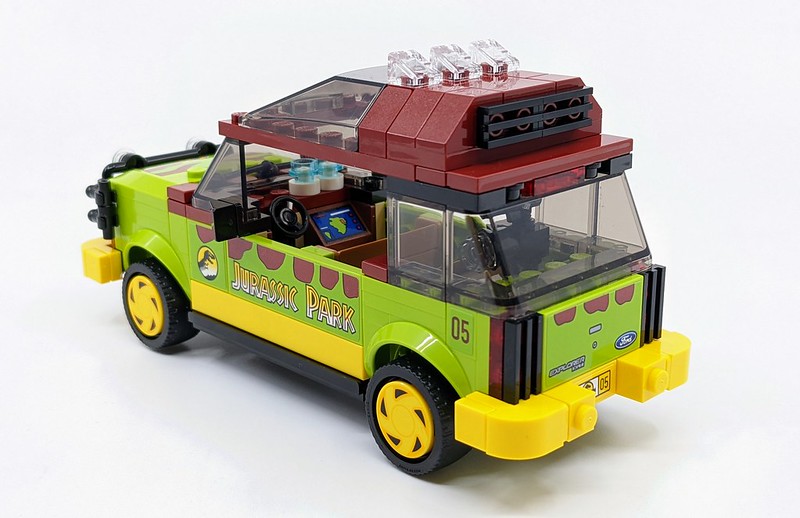 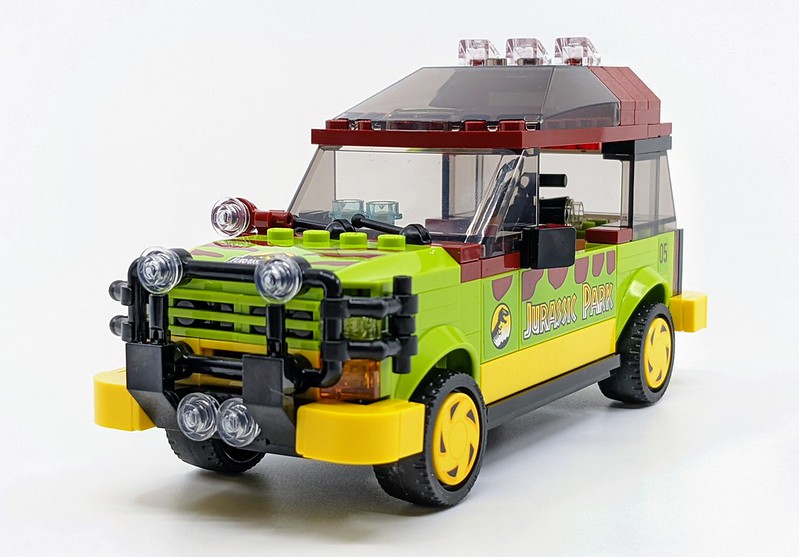 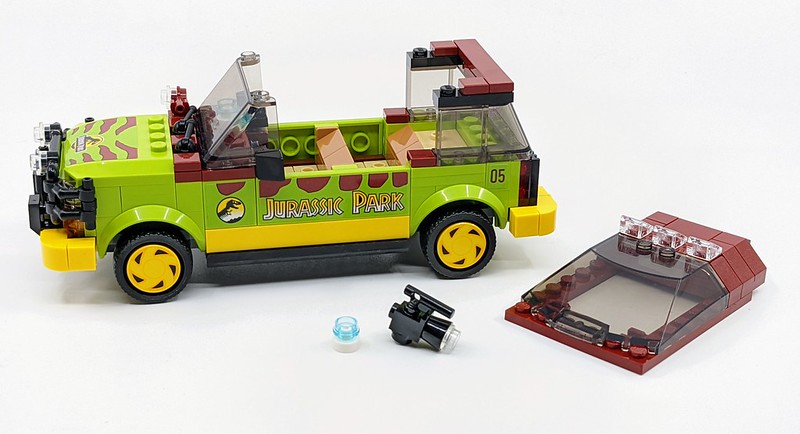 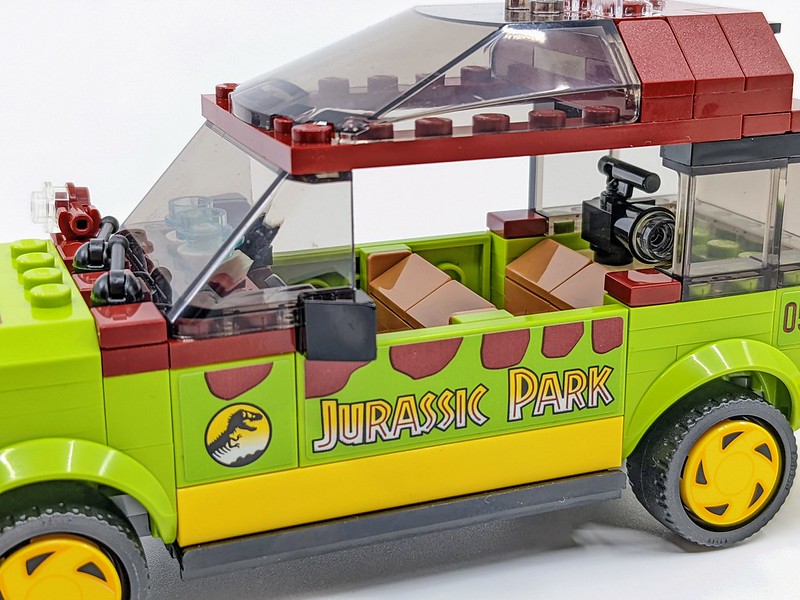 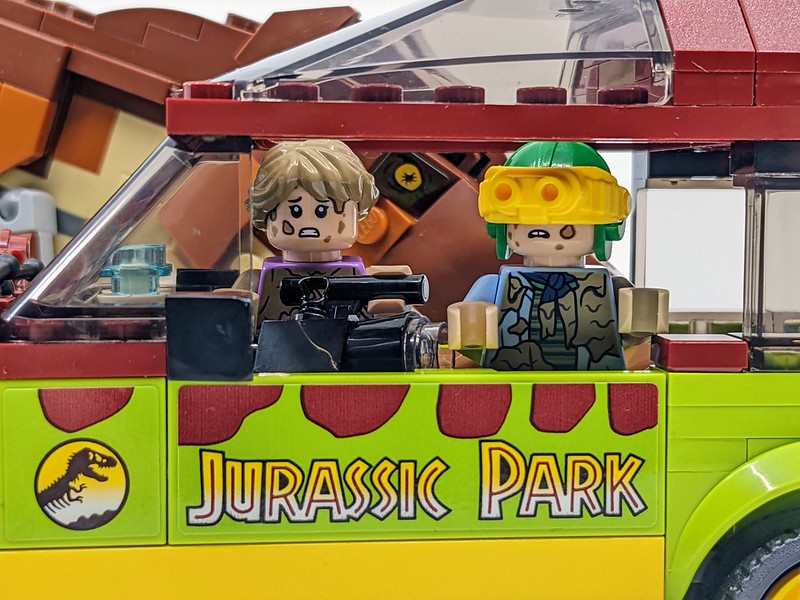 The second explorer has been well and truly wrecked by Rexy. It’s a completely different build with full vision but uses the same stickered detail and tires. It can neatly slot into the gap found in the base plate although it’s not firmly secured in place. Same with the other vehicle, this is only held in place by a couple of 2×1 slopes. A couple of clear bricks to keep it firmly in place would have been nice. 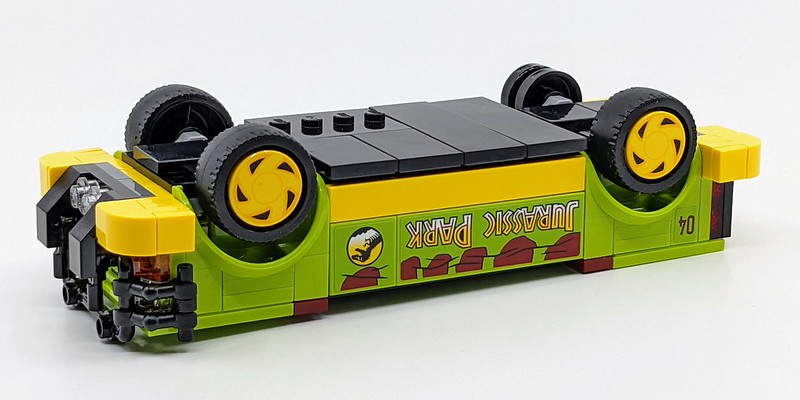 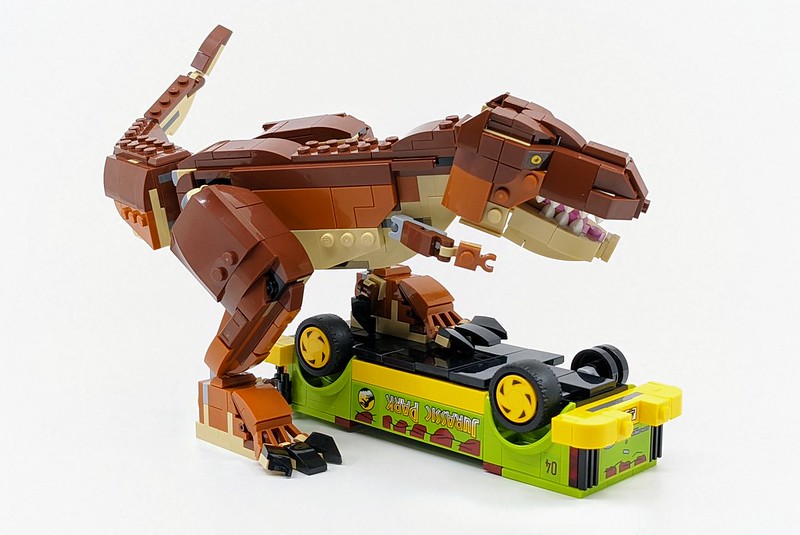 The base is surprisingly complex with only a single large plate used to create it. The rest is a mix of various other plates and tiles. This helps to give the base a textured surface as well as leaving areas to add the vehicles. You’ll also find a pair of dino footprints in the mud, which is actually a cool touch to add. The base is also where the broken electric fence is mounted along with some of the jungle leaves. Four posts are clipped to the back of the base plate, the end two posts have a trio of flexible cables hanging from them. These do the job well but can be a little iffy to place, due to the flexible nature. The jungle foliage is also added to the back of the wall and brings a welcomed spread of visual flair to the set. The base is also home to a couple of printed plates featuring a quote from Dr Malcolm and the LEGO Jurassic Park logo. This is exactly the same format as the Star Wars sets. 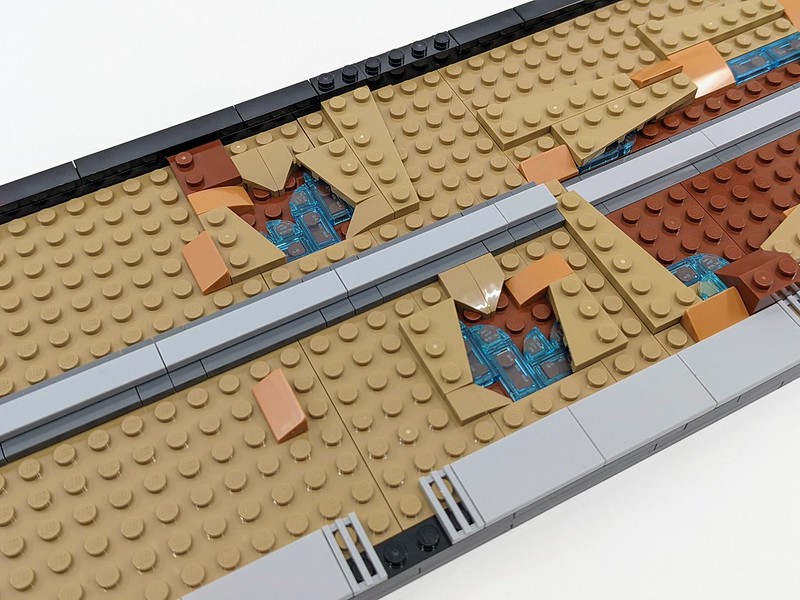 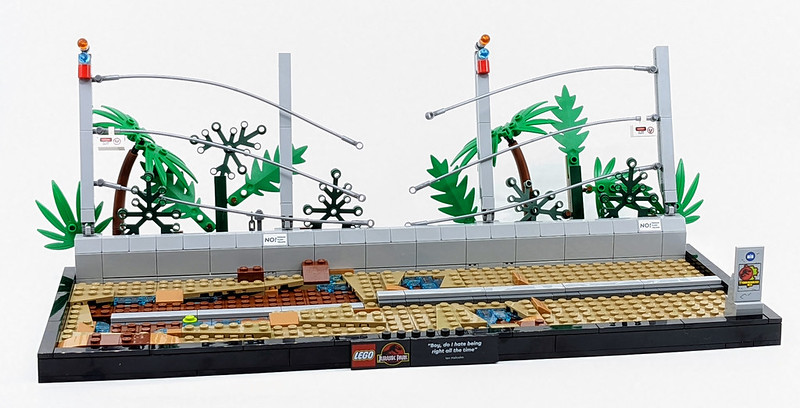 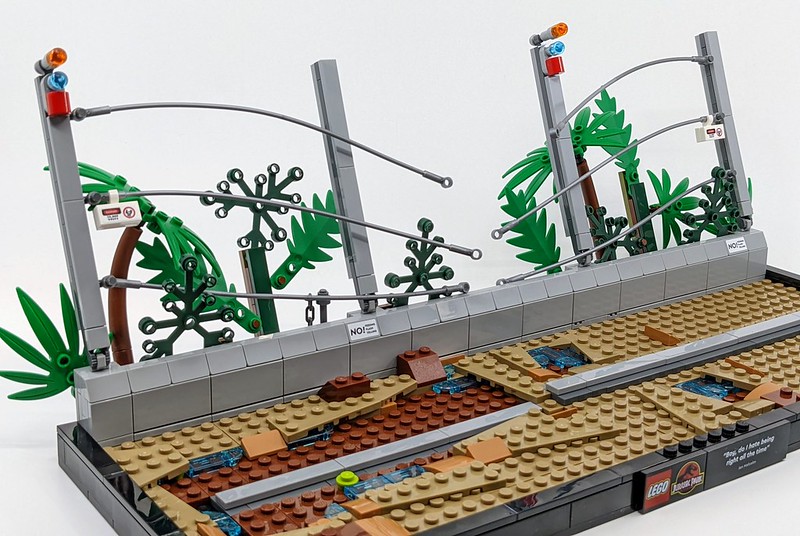 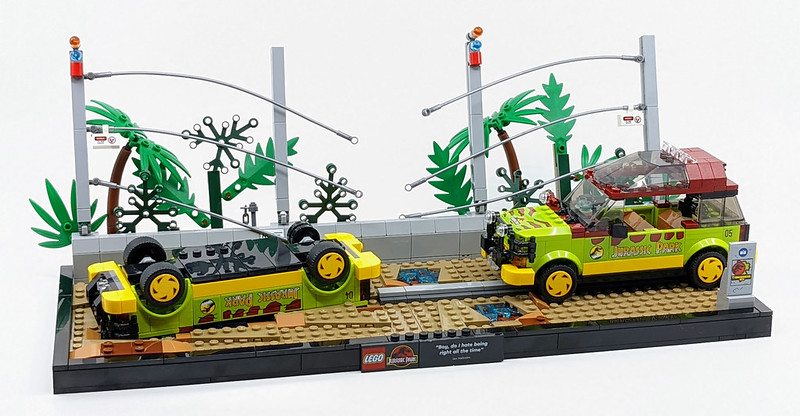 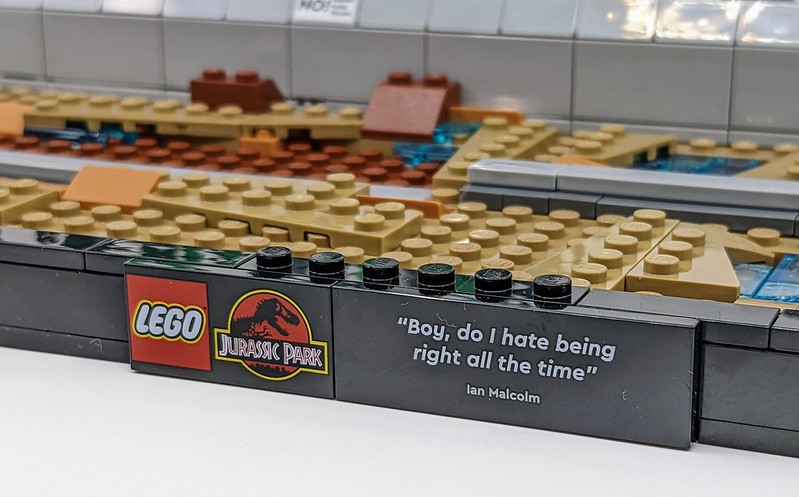 Of course, it wouldn’t be a Jurassic Park set without a dinosaur and the moment the set is inspired by is when the T. rex first breaks on the scene and attacks the park convoy. Rexy is a brick-built creature with a similar style to the brick-built dinosaur from the Jurassic Park gate set but its scale is much smaller, making it a similar size to one of the dinosaur figures from the Jurassic World playsets. I’m in two minds if I prefer a buildable dinosaur or figure version. I guess a buildable T. rex offers a much better means of flexibility, which results in being able to create a more gestured scene. 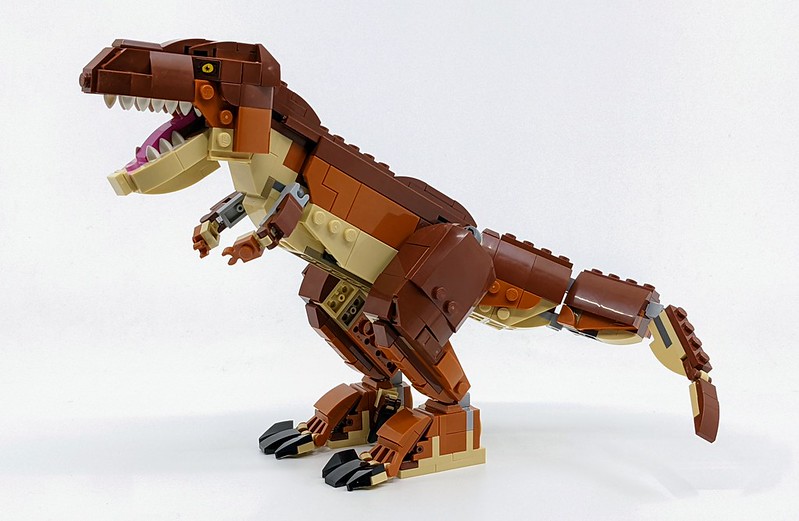 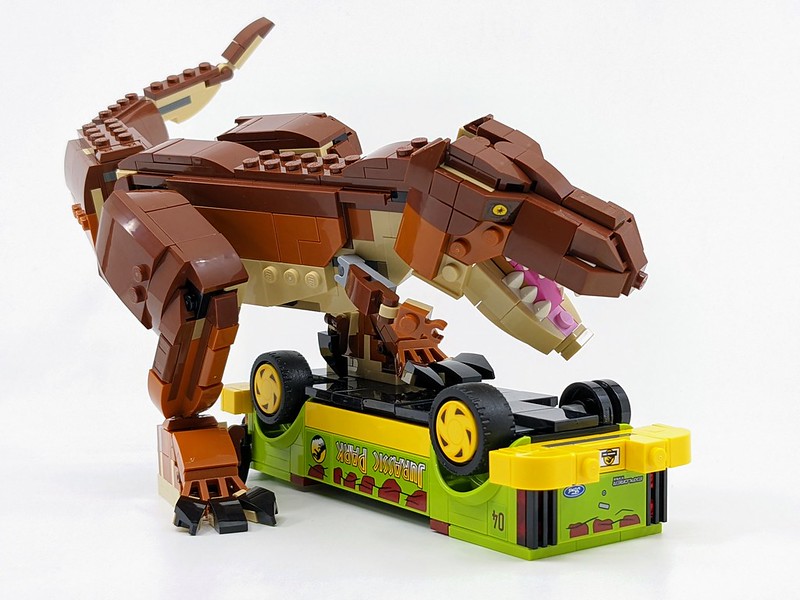 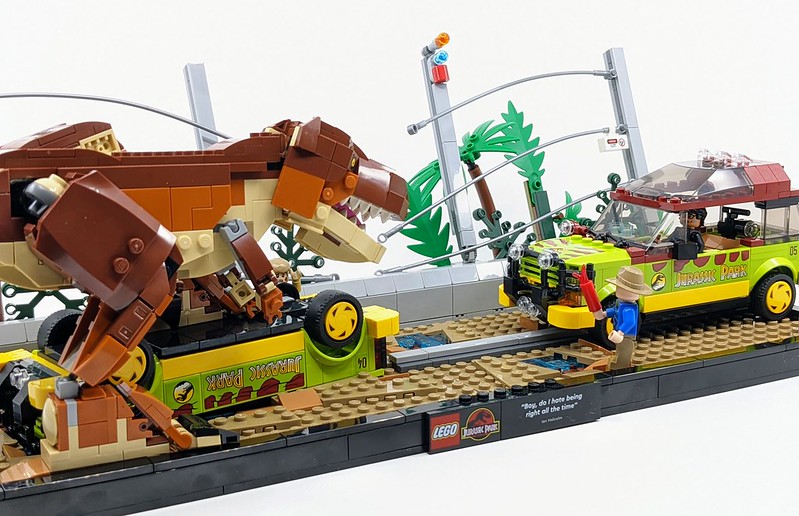 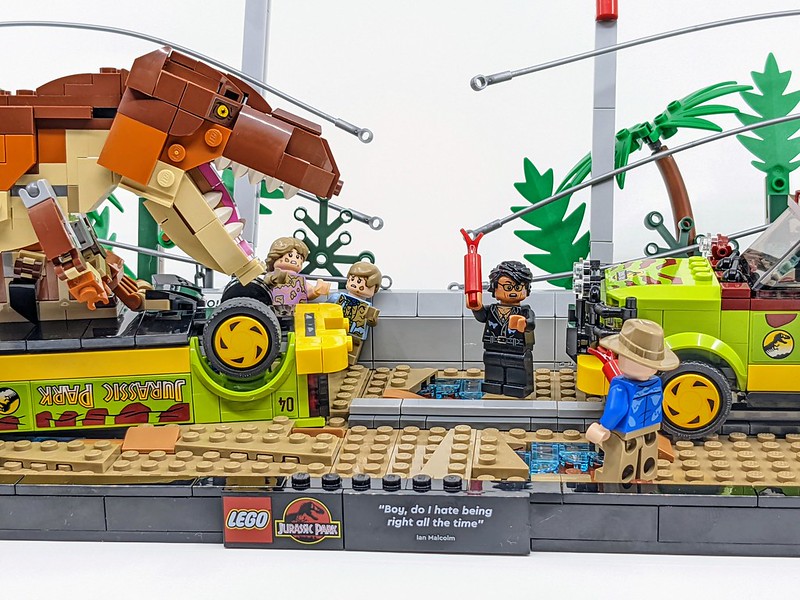 The set features 4 minifigures and although each of the characters has appeared in other Jurassic Park inspired sets, these versions are all unique to this set. Lex and Tim are great versions of the characters, with the print detail showing off their mud-covered clothing. They also each have a different coloured arm, which is such a simple yet cool little touch. The same mistake made with the Velociraptor Chase has been made again with this set, once again giving Lex the fixed short legs. These make them the same size as the much younger Tim. A pair of slightly longer and moveable short legs would easily fix this.

Dr Alan Grant has a similar design to his past versions but has a rain-soaked shirt and muddy trousers. He can also swap out his famous hat for a hairpiece. Dr Ian Malcolm hasn’t got as dirty as the others but has a little bit of dampness on this slightly opened shirt. Unfortunately, the cowardly lawyer Gennaro hasn’t been included. This is the perfect set to have finally featured this fan-favourite character.

All the various elements combine together to create a unique set, which is far more displayable than a playset. Although it feels more of the latter than the similar Star Wars Dioramas do. The different elements do come together nicely but I would have preferred it if they were a little more securely held in place. The way parts of the build spill over the edges, give the scene more of a visual impact but does increase the diorama’s footprint and therefore the area in which it can be displayed. Despite the slight niggles as a massive fan of the original Jurassic Park films, being able to build a slice of my childhood was delightful and the set has whet my appetite for more Jurassic Park scene dioramas.

+ Finally, a Jp branded Ford Explorer
+ Perfect set for fans of the film