76247: The Hulkbuster: The Battle of Wakanda Review

Just like LEGO® City’s yearly selection of fire engines and police cars, the LEGO Marvel theme also likes to regularly revisit similar moments or characters. Iron Man is obviously a fan favourite and his Hulkbuster armour has been the subject of a number of LEGO sets. With the LEGO Marvel range continuing to seek inspiration from the Infinity Saga, one of the upcoming new 2023 sets heads back to Avengers Infinity War and the Battle of Wakanda. For my next 2023 LEGO set review, I’m taking a look at The Hulkbuster: The Battle of Wakanda. 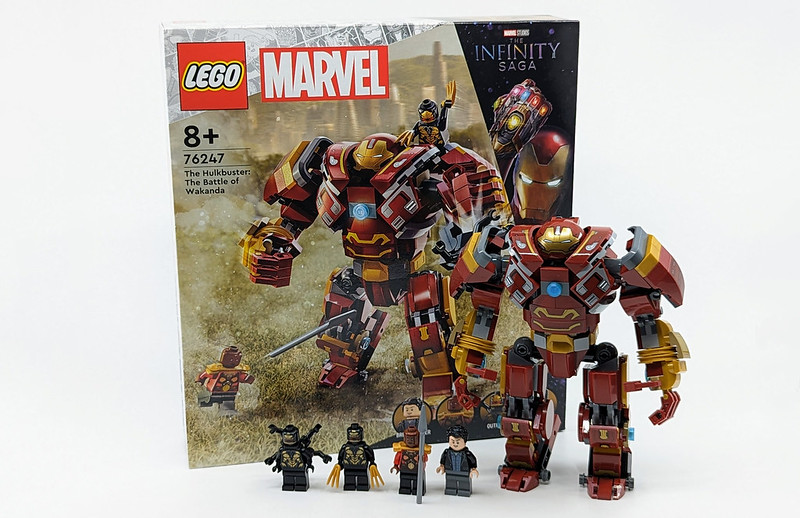 Put action from Marvel Studios’ Avengers: Infinity War into kids’ hands with the highly posable LEGO® Marvel The Hulkbuster: The Battle of Wakanda (76247). This mega, movable mech and 4 minifigures make an ideal gift for young Marvel fans aged 8 and up.

Jointed Hulkbuster for authentic Marvel action
Based on a scene from Marvel Studios’ Avengers: Infinity War, this versatile playset features a buildable Hulkbuster mega suit, which has multiple articulation so kids can move, position and pose the mech with ease. Locked knee joints provide excellent stability, and an opening cockpit reveals space for the minifigure pilot. There are 4 minifigures included in the set: Bruce Banner, Okoye and 2 outriders. Bruce Banner’s head rotates to show him ‘turning green’. Okoye carries a spear. For added digital fun, the LEGO Builder app features intuitive zoom and rotate tools that let kids visualize their model as they build. 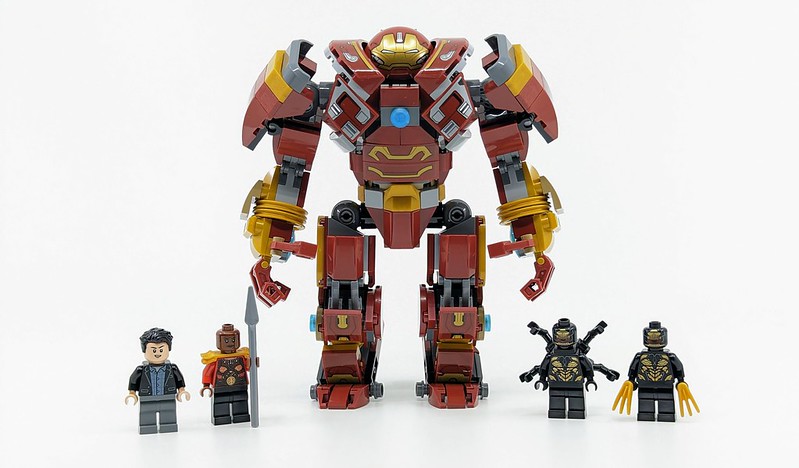 The Hulkbuster first appeared in Avengers: Age of Ultron, where it was used to take on an out-of-control Hulk. It later appeared in Avengers: Infinity War where Bruce Banner took control of the suit when the green guy didn’t want to come out and play. Inside the armour instead of fighting against it, Bruce joins the Battle for Wakanda using the strength of the armour to take on Thanos’ army and protect Vision. 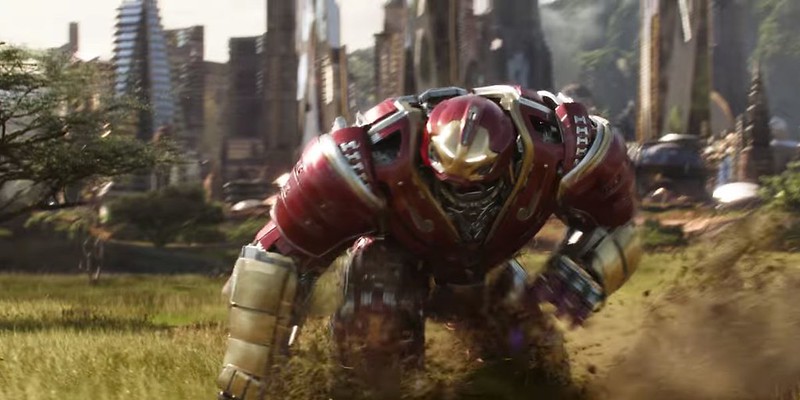 In LEGO form, the Hulkbuster suit has been the subject of a number of different sets, some of which are inspired by the same moment in the Avengers film. Although it is the same scale as other sets, it’s by far the best take on the armour at this size. The body of the armour is quite chunky but that works for the style of the suit. The sections which clip around the arms and onto the body of the armour help to bulk it out even more. There’s enough room in the body to place a seated minifigure. 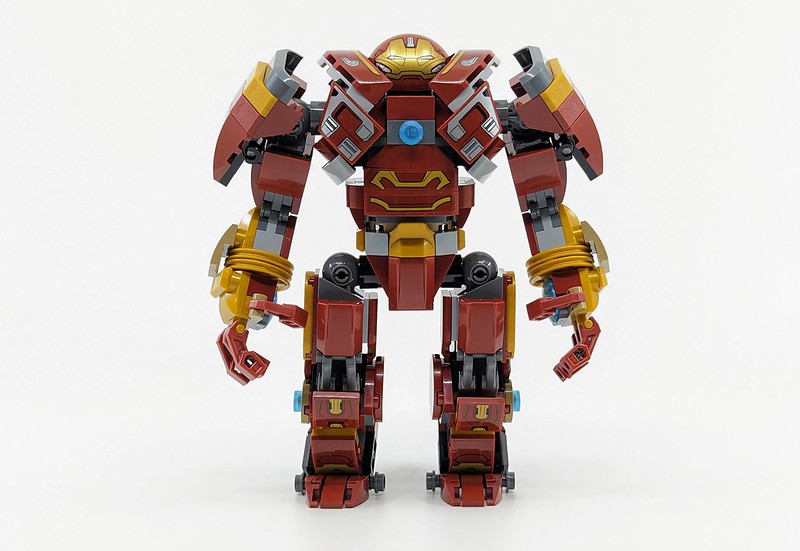 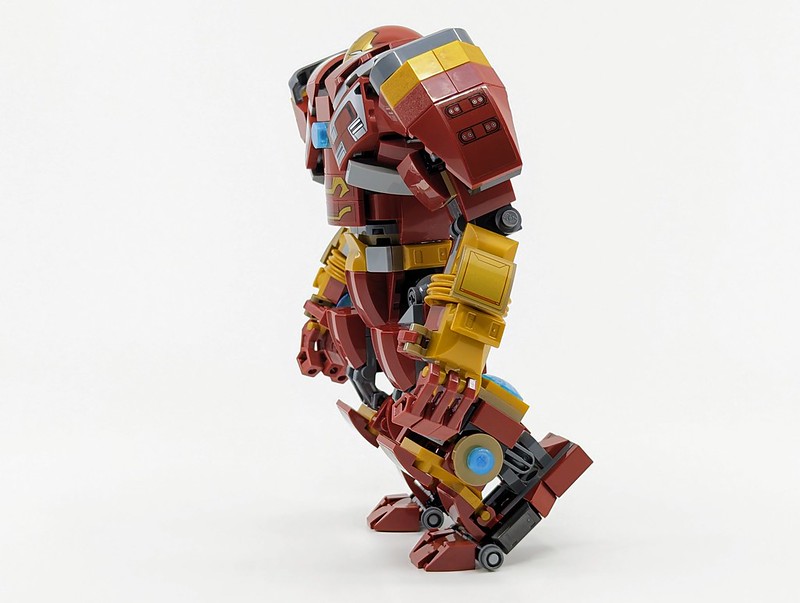 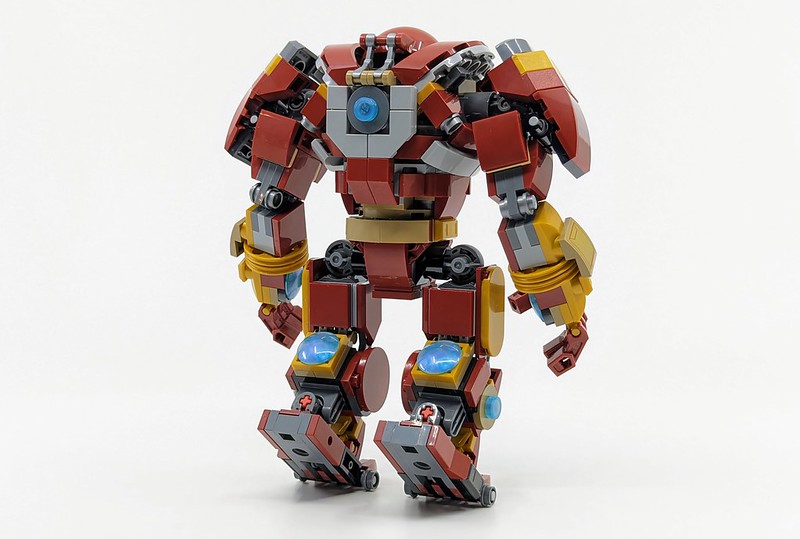 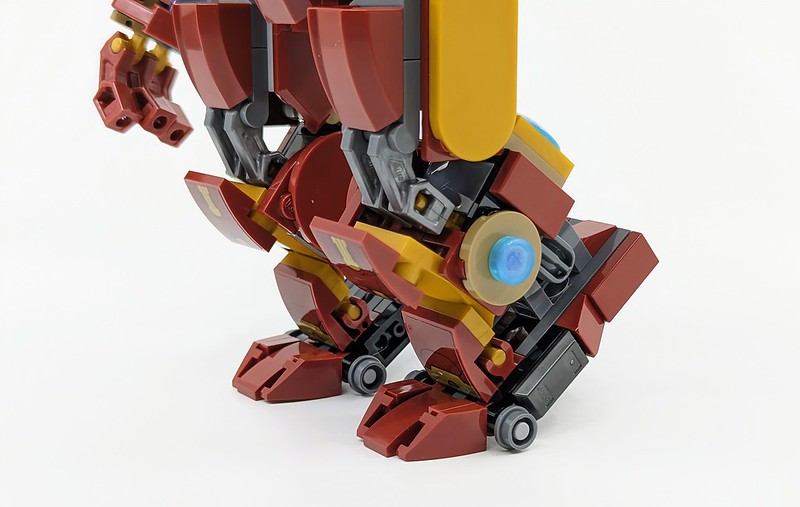 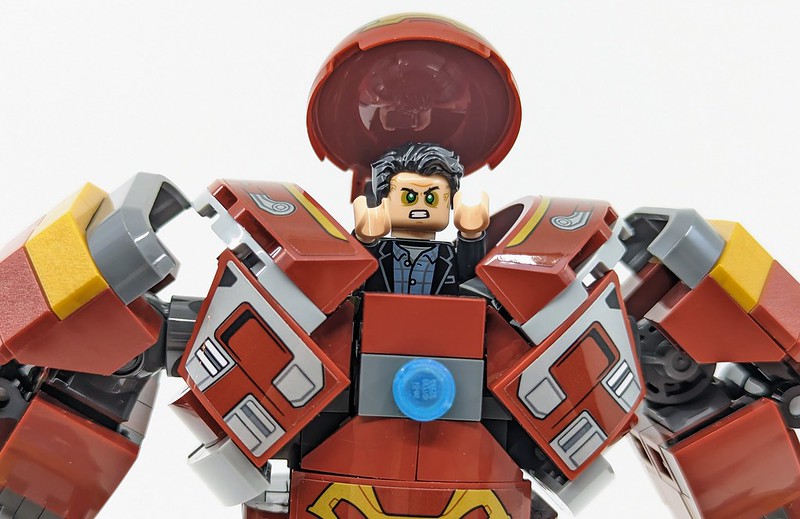 The head may seem a little squashed into the body, but it matches the updated design the armour received in Infinity War. Although in all honesty, the set looks better with the head open and Bruce on show. A key part of the Hulkbuster suit is the limbs which provide a mixed bag in this set. The arms are great with the gold wedge belt wheels on them look great and add detail to the set overall. 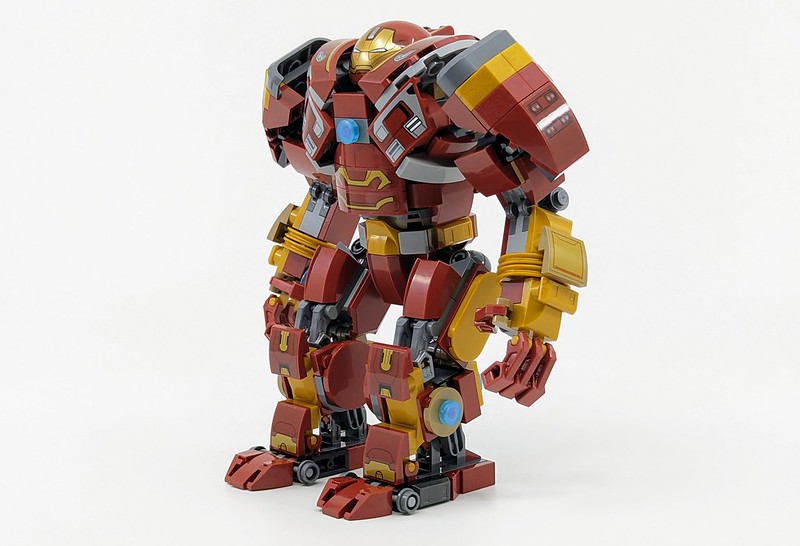 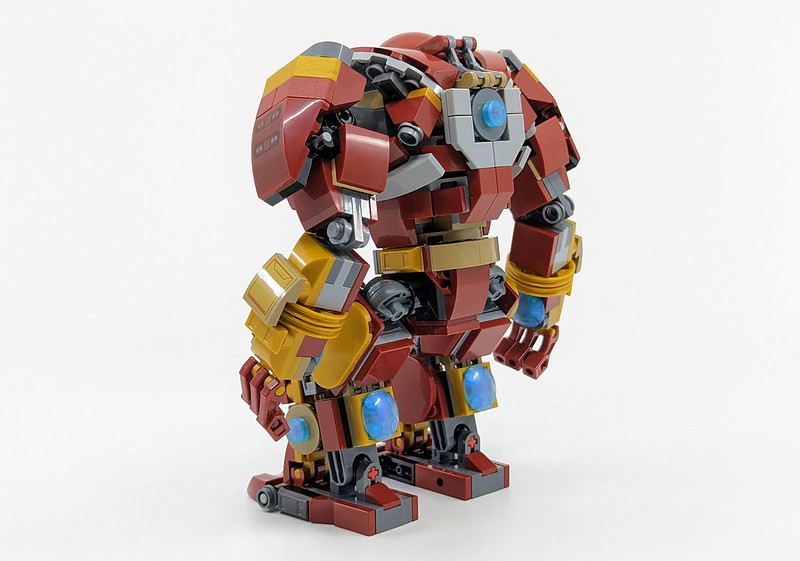 The legs are a little tricky to pose, once clicked together at the knee, they are only jointed at the waist and toes. If standing on the feet, it feels like the set is leaning oddly. It doesn’t fall over and isn’t unstable, but it just looks as if it’s standing awkwardly. If you can get it to stand on the toes, it looks quite cool. The blend of gold and dark red elements certainly helps to give this version of the Hulkbuster a better visual appeal, something also helped by the addition of a few well-placed stickers. 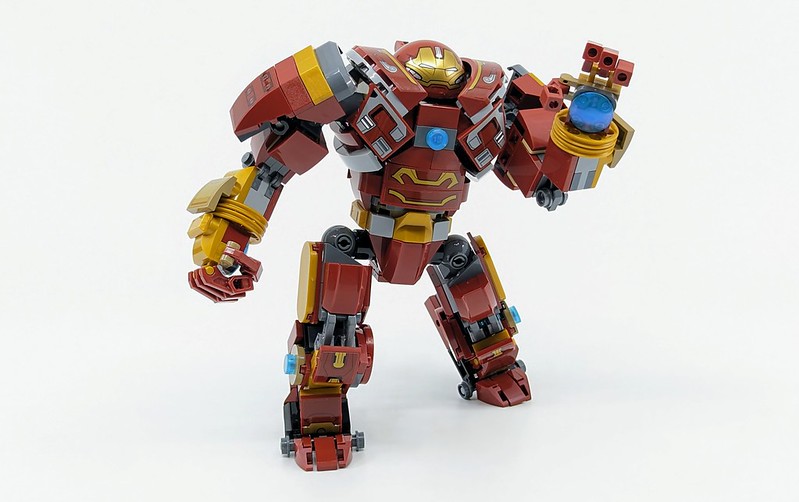 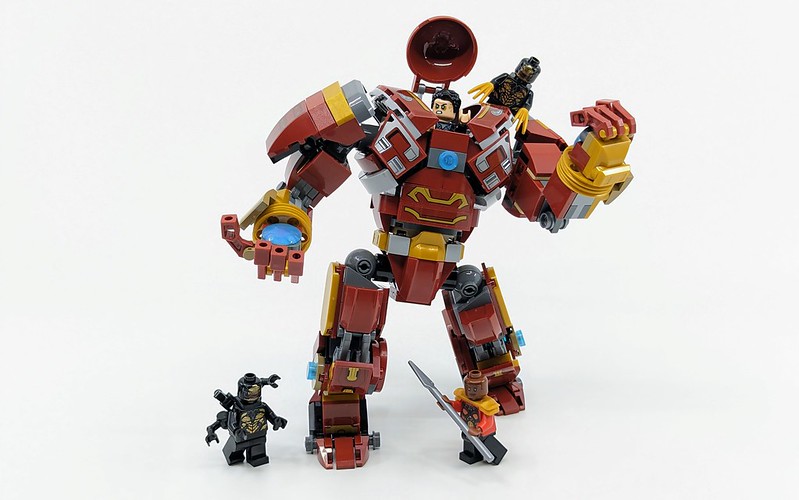 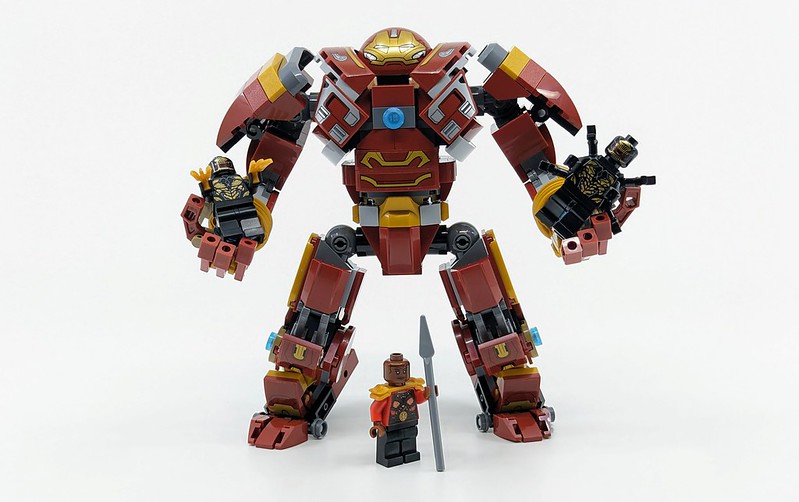 The set includes 4 minifigures all of which have previously appeared in other sets in some form. The highlight is a new version of Bruce Banner, which features an amazing head. One side is a normal expression but the other shows Bruce in the early stages of hulking out. This isn’t anything new but it’s certainly the best take on the style. The shorter hairstyle is much better and the shirt under Bruce’s black jacket adds a nice bit of detail compared to previous versions. Okoye is another character who has been portrayed in other sets. In fact, the minifigure is basically the same as her most recent appearance in the War on the Water Black Panther set. The torso and head feature the same design, it just has the addition of shoulder armour. The 2 Outriders are exactly the same as past versions, with one featuring additional ‘arms’ and the other claws.

Despite the much, much, much smaller size and price point, this version of the Hulkbuster suit is being compared to the recently released super-sized version. Although they are vastly different, it does show bigger isn’t always better. This is only a small-scale version of Stark’s famous failsafe but it does a great job of capturing the appearance of the Hulkbuster. The build and use of parts give it a bulky feel without the use of unnecessary parts or iffy connections. The minifigure line-up is saved by a great new version of Bruce Banner, the alternate ‘hulk out’ face is marvellous. I did find the legs tricky to pose, if stood on flat feet, it feels like it leaning back and if you reposition the body to counteract this, it gives the suit an unnatural stance. Despite that, it’s another fun take on a moment previously captured in previous LEGO sets and it’s certainly the best version of the Hulkbuster on this scale.