One of the most exciting and intriguing developments to the MCU is coming via the first-ever animated story to be told in this vast interconnected world. Marvel’s What If…? recounts stories that may seem familiar but feature different characters in different roles. The Disney+ show will act as inspiration for several LEGO® sets and the upcoming series of LEGO Minifigures. After already taking a look at the Captain Carter & the Hydra Stomper set, here’s a look at another What If…? which marks the return of Tony Stark, but not exactly as you know him. The set includes a Hulkbuster suit but with a Sakaarian twist and the mysterious all-seeing Minifigure who guides us through the Multiverse – The Watcher. So here’s a closer look at set 76194: Tony Stark’s Sakaarian Iron Man. 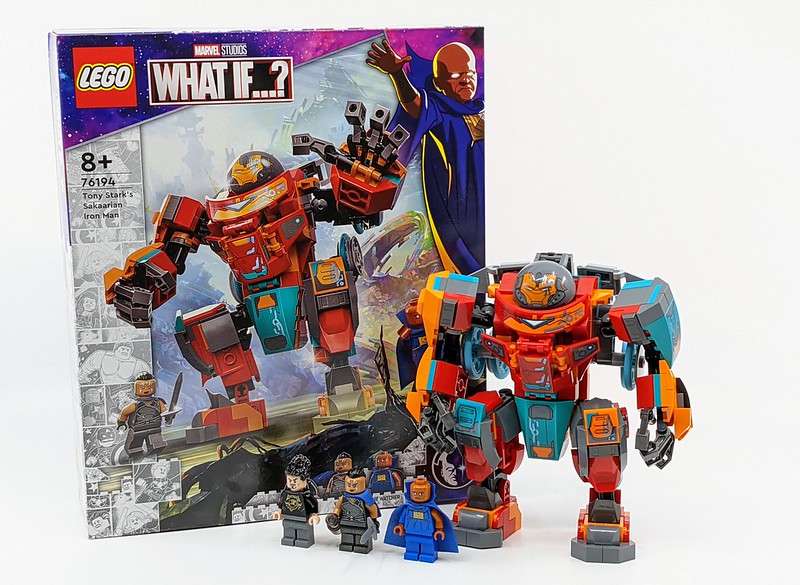 Take Marvel fans to a new dimension of build-and-play, imaginative adventure with LEGO® Marvel Tony Stark’s Sakaarian Iron Man (76194). This landmark LEGO Marvel set lets kids aged 8 and up recreate scenes from the animated Marvel Studios’ What If…? series on Disney+ and explore new stories from the Marvel Cinematic Universe.

New stories with iconic Super Hero characters
This exciting expansion of the Marvel Cinematic Universe features 3 minifigures – Tony Stark, Valkyrie and The Watcher – and a buildable mech that can also be rebuilt into a powerful-looking car. Kids place the Tony Stark minifigure into the Sakaarian Iron Man mech. This mechanical giant is highly posable, allowing kids to twist and turn the mech as it advances into Super Hero action. When there’s a need for speed, kids rebuild the mighty mech into a power-packed vehicle and race off for more amazing adventures. 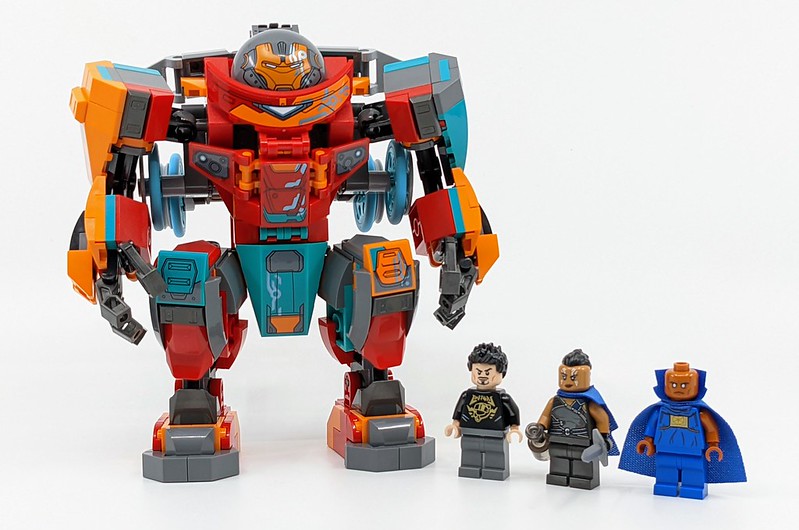 Although the What If…? series takes the MCU in a unique and vastly different direction, the LEGO sets inspired by the upcoming Disney+ series are still rooted in familiar territories. Iron Man is a major part of the MCU and Marvel in general. His large mechanised Hulkbuster Iron Man suit is a great, if a little overused, addition to many LEGO Marvel playsets. That includes this What If…? set which transplants Stark and his Hulkbuster suit to the trash planet of Sakaar, where he meets Valkyrie. With all the events of What If…? overseen by the mysterious Watcher. 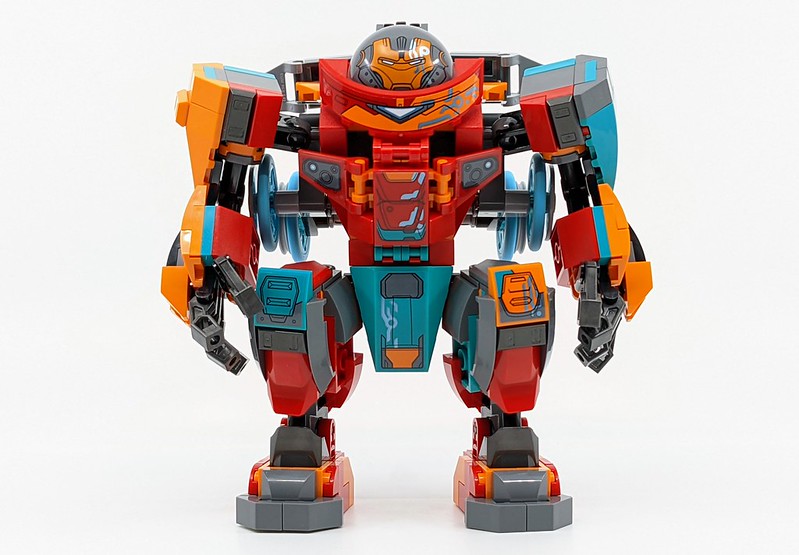 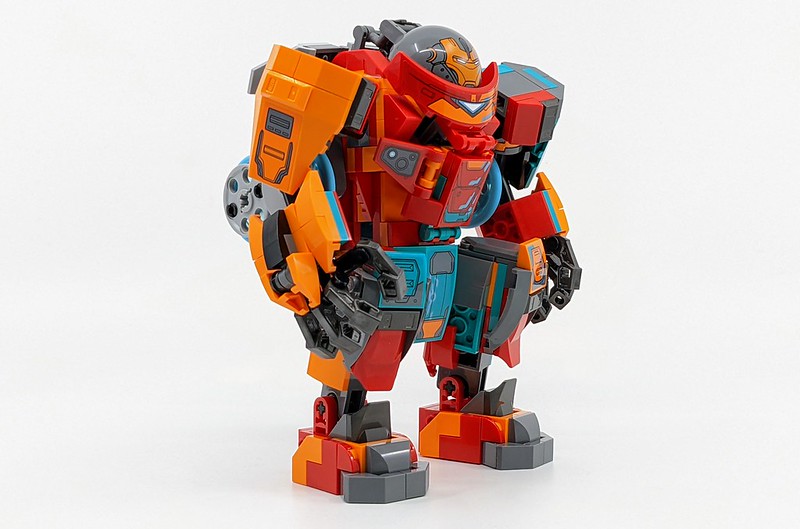 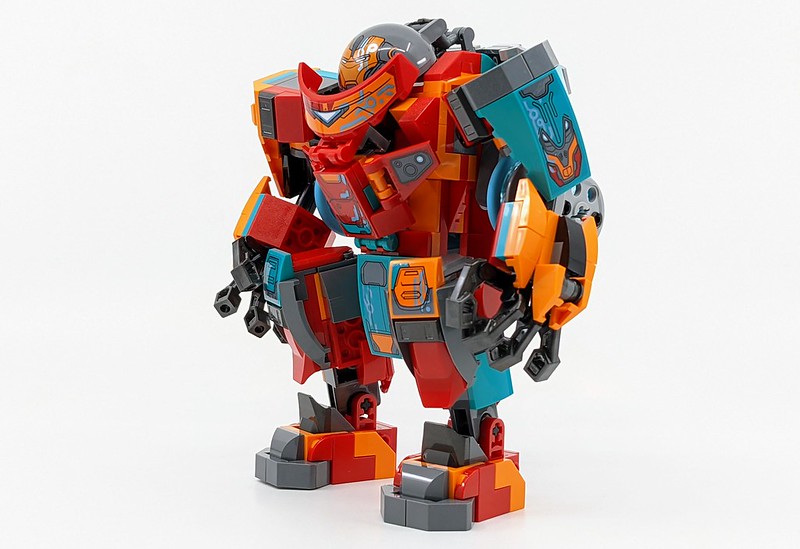 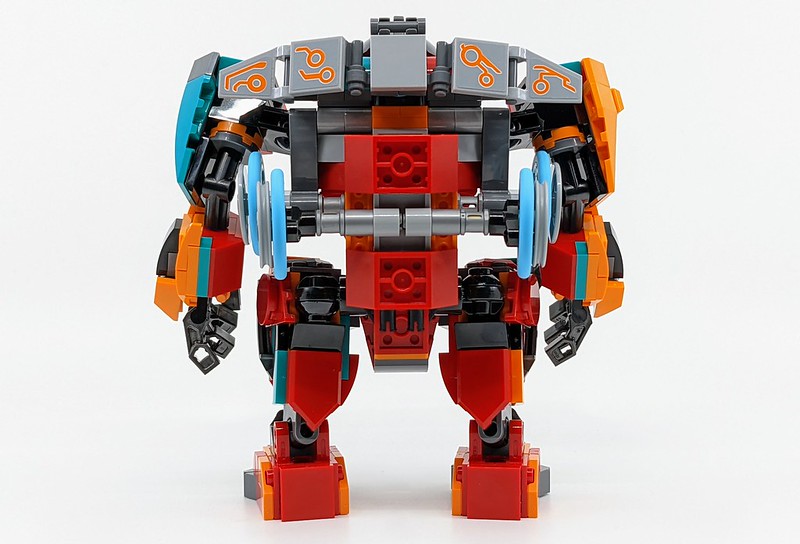 The Sakaarian Hulkbuster is dubbed a mech suit, although its build and appearance is very similar to past Hulkbuster sets. The big difference is the colour scheme, which is far jazzier compared to the usual red and gold suits. The splashes of blueish-green and grey help tie the mech to the planet of Sakaar, which was first seen in the MCU during Thor Ragnarok. This also runs across the various stickers, which have flashes of Sakaarian font on them. 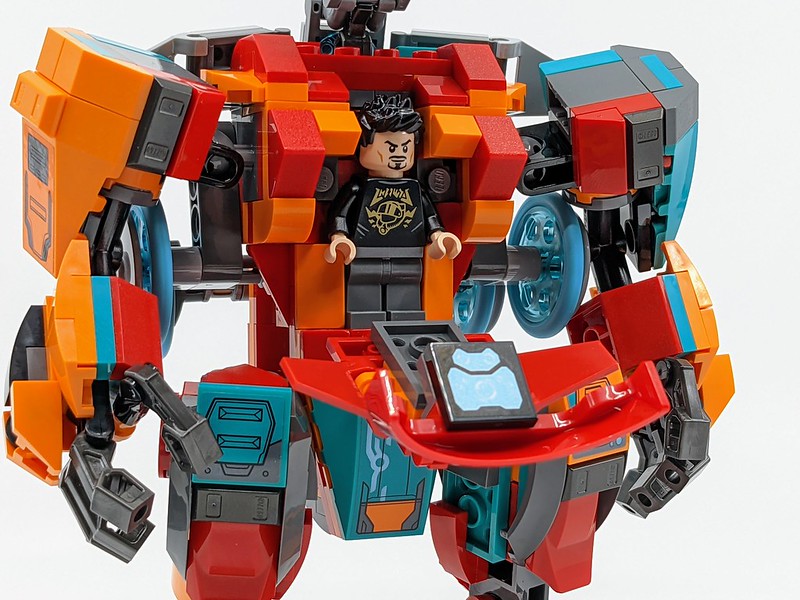 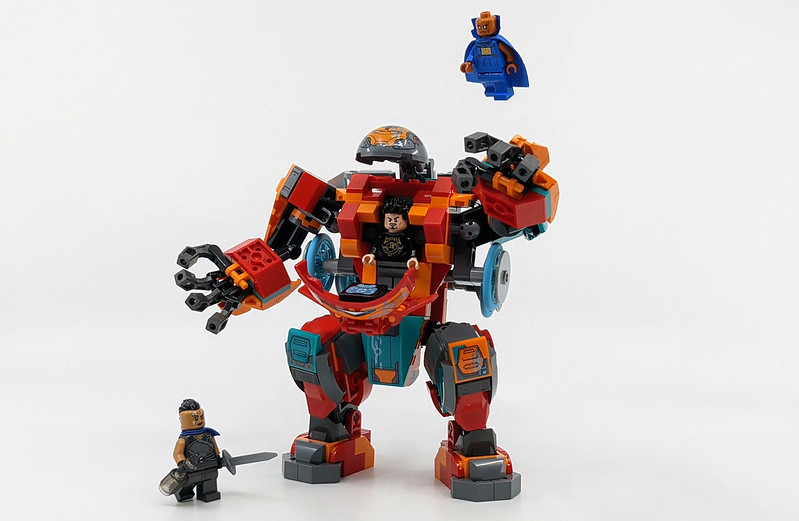 You’ll notice the mech has some seemingly odd additions, which are tied to an interesting play feature, more on that shortly. Although these pieces are necessary, they do slightly restrict the movement of the mech in some places, especially the arms. Plus the strange fin-like wing behind the head can be a little awkward. However, you can still get a few decent poses from the set. 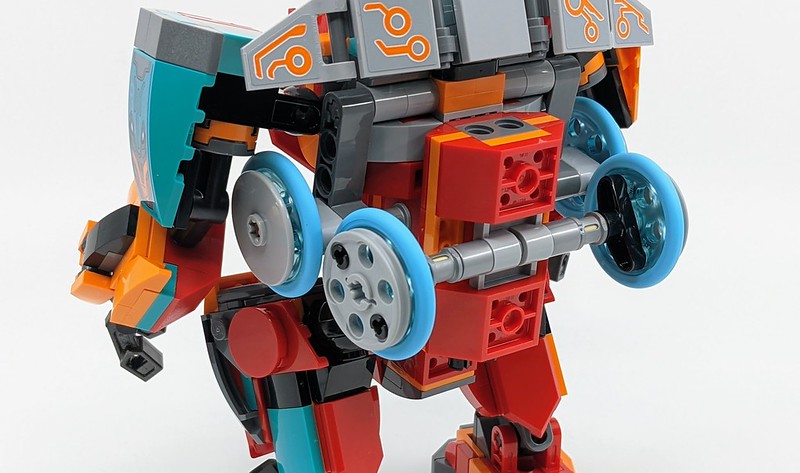 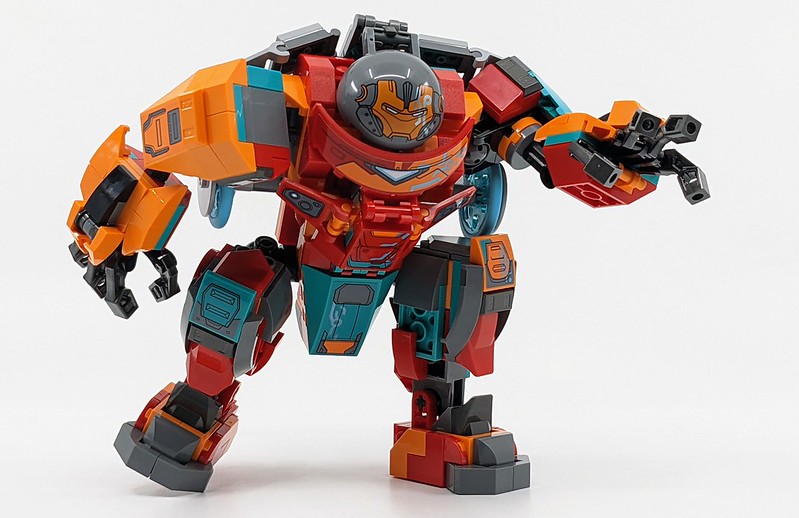 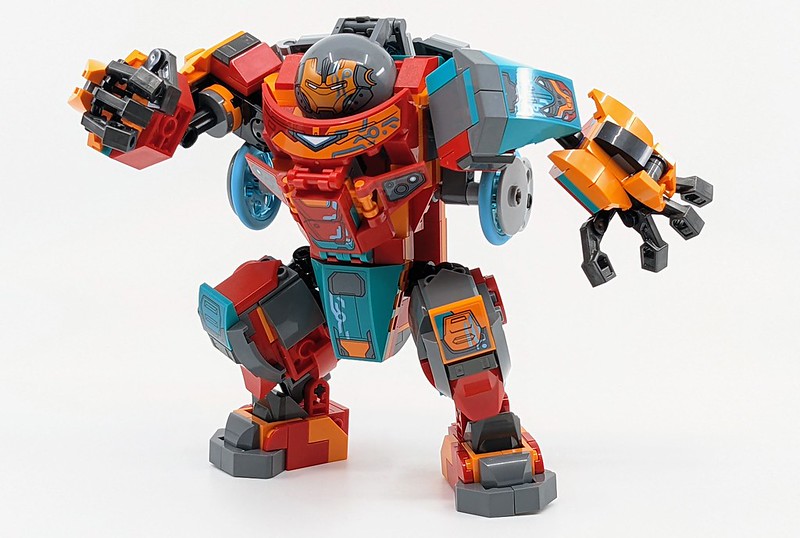 So these odd additions play an important role in an unusual difference compared to previous Hulkbuster sets. The suit can be deconstructed and rebuilt into a car. It’s a pretty cool transformation and although it requires a little work, the set comes apart fairly easily. It will be interesting to see if this is featured in the upcoming Disney+ show, as we’ve not seen Stark, Valkyrie or this funky-looking Hulkbuster suit in any of the preview footage or merchandise. 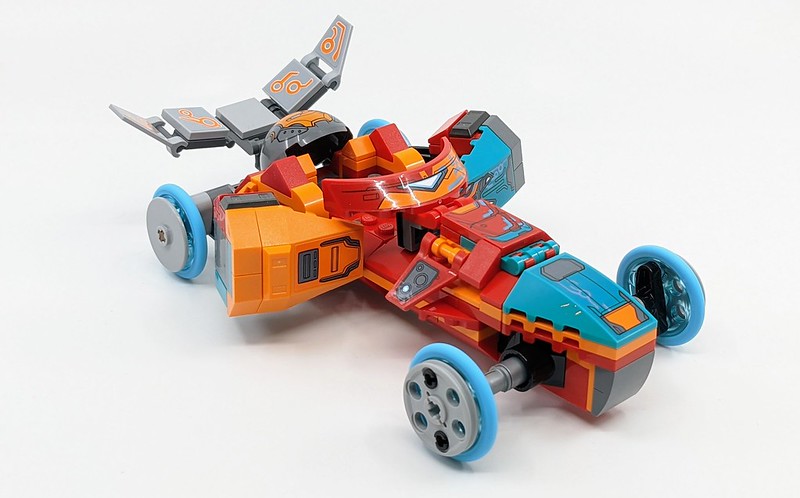 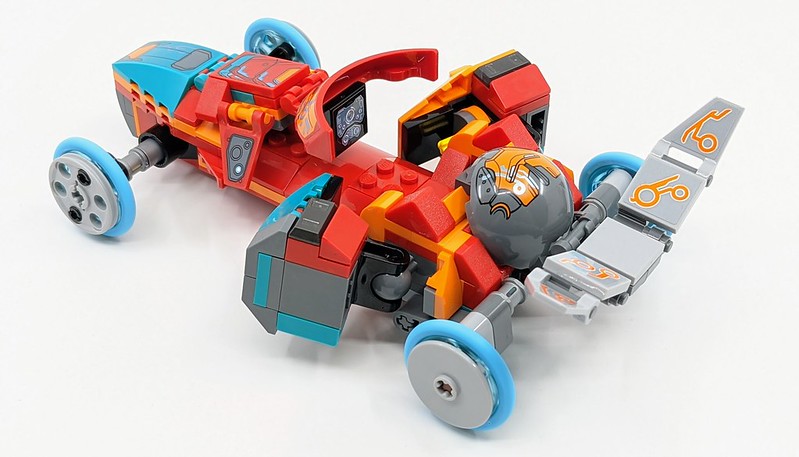 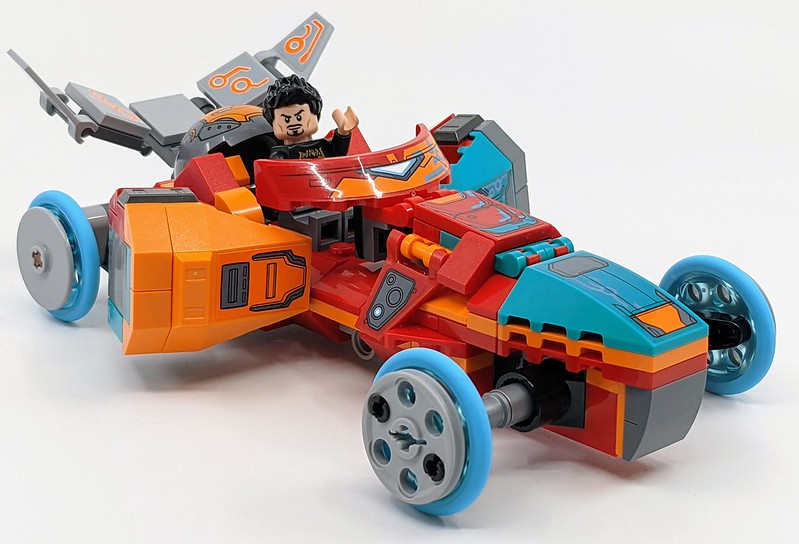 One of the most important parts of the LEGO Marvel What If…? range are the Minifigures. As well as many unique characters appearing in the upcoming LEGO Minifigures series, the sets also feature some interesting faces. This set includes three Minifigures – Tony Stark, Valkyrie and The Watcher. Despite Stark’s mech suit being a little different, his Minifigure isn’t, however it does offer a new outfit for the playboy billionaire. In The Avengers, Tony wears a Black Sabbath T-shirt, which is recreated with a LEGO twist. The black and gold design shows a sort of gas mask helmet which has been switched for a more LEGO-like helmet design. Stark has two face designs, one a standard face, with the other featuring the Iron Man in-suit overlay visuals. Valkyrie has only appeared in one other LEGO set, this is a similar-looking take on the character, with the main difference being the switch from blue to black for her outfit. The face is very similar and the Minifigure uses the same hairpiece and material cape.

But the most unique of the three characters included in the set as to be The Watcher. Part of an immortal race of beings, who have watched over many events in the Marvel comics and from their brief appearance in Guardians of the Galaxy Vol. 2, the MCU as well. In What If…? Watcher Uatu acts as the guide to various multiverse stories as well as only appearing in this set. Based on the brief reveals we’ve seen of the character, the Minifigure is a brilliant recreation of Uatu. This royal blue outfit is nicely recreated with print detail and two material pieces, although I would say the golden square chest piece seems a little small. 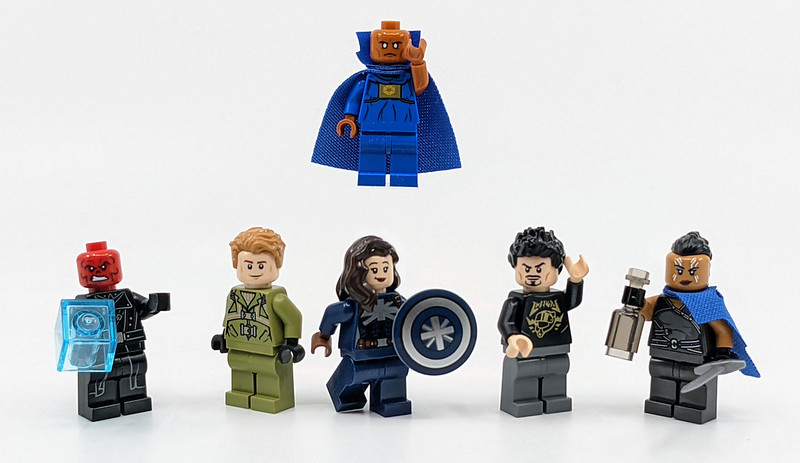 Although both of the upcoming What If…? sets have mechs, at least this one offers something a little different with the ability to transform the suit into a car. I also like the colours chosen for the mech, they are a nice mix between what we’d expect an Hulkuster suit to be as well as the green sections and stickers giving it an extraterrestrial flare. The Watcher is a great Minifigure and an important part of the What If…? story. How well it matches what will be shown in the TV series is yet to be seen. But we’ll know when Marvel Studios What If..? begins on Disney+ on August 11th. 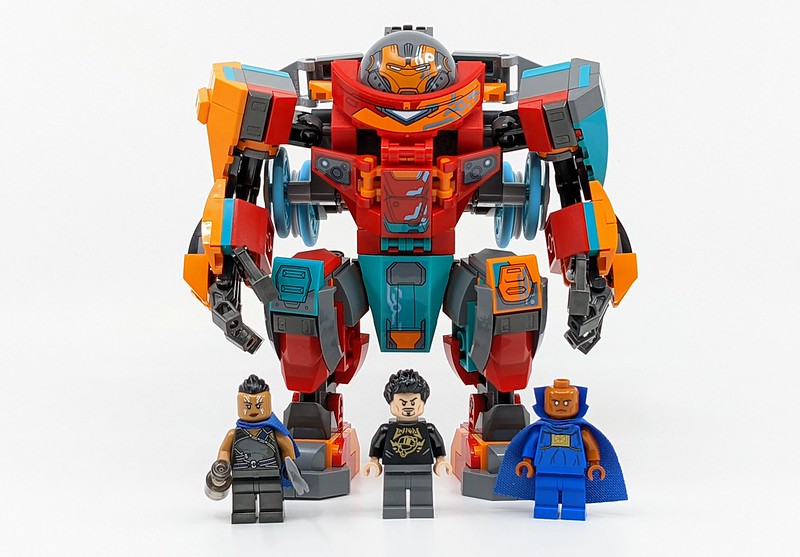