Before creation itself, there were six singularities. Then the universe exploded into existence, and the remnants of these systems were forged into concentrated ingots… Infinity Stones. These stones, it seems, could only be brandished by beings of extraordinary strength – until now. But a device capable of harnessing the power of the Stones doesn’t require the skills of a dwarven king. Instead, it requires the ability to connect together LEGO® elements.

Next month the LEGO Marvel theme revisits the Infinity Saga, with a range of new sets. One of those sets is the Infinity Gauntlet. A buildable LEGO replica of the powerful glove used by the Mad Titan, Thanos, to snap half of all life from existence. Thanks to a retailer accidentally placing the set for sale instead of pre-order, I’ve managed to get my hands on the Infinity Gauntlet early, which does put a smile on my face and allows me to review it ahead of its release. 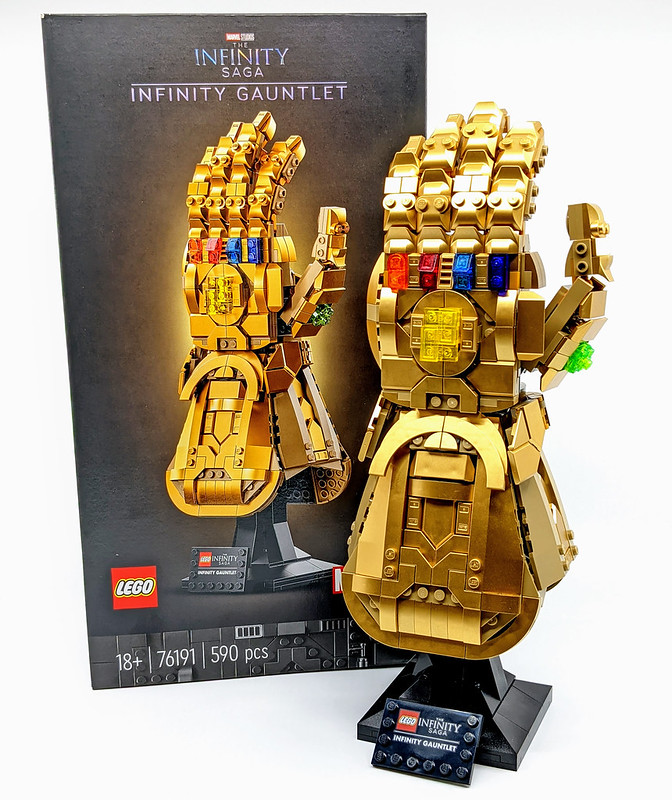 Collectible Marvel movie model
This LEGO brick recreation of the iconic Infinity Gauntlet featured in the Marvel Studios’ Avengers: Infinity War and Avengers: Endgame movies is certain to attract attention and interest wherever it is displayed. With movable fingers, vibrantly coloured Infinity Stones and a descriptive tablet attached to a sturdy base, this golden gauntlet provides an engrossing construction challenge and a finished model that will captivate all who see it. 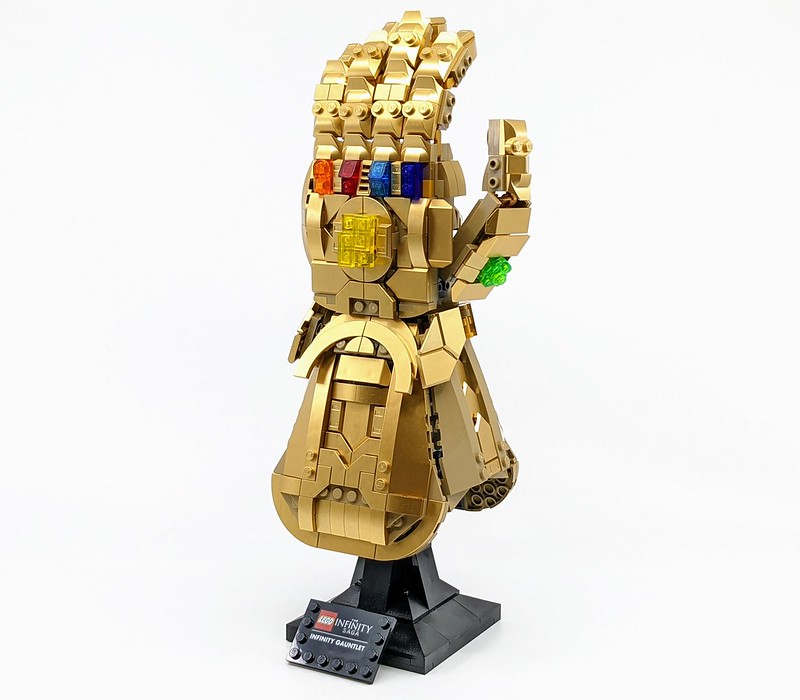 Last year the LEGO Group introduced a new line of 18+ sets. These sets are focused towards the adult community and have provided plenty of new build experiences. One such new range of builds is the Star Wars Helmets. Since then they have expanded beyond the LEGO Star Wars theme and just helmets. The Infinity Gauntlet is most certainly a departure from the helmets but still follows a similar build. 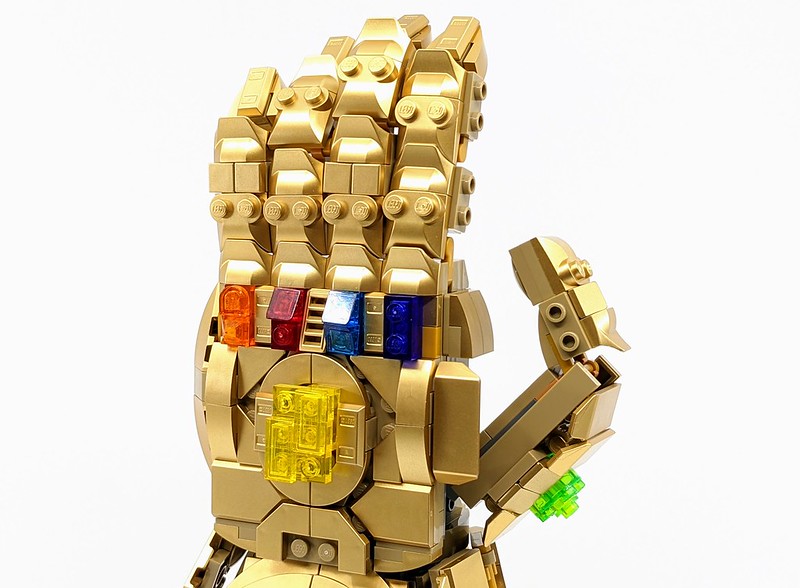 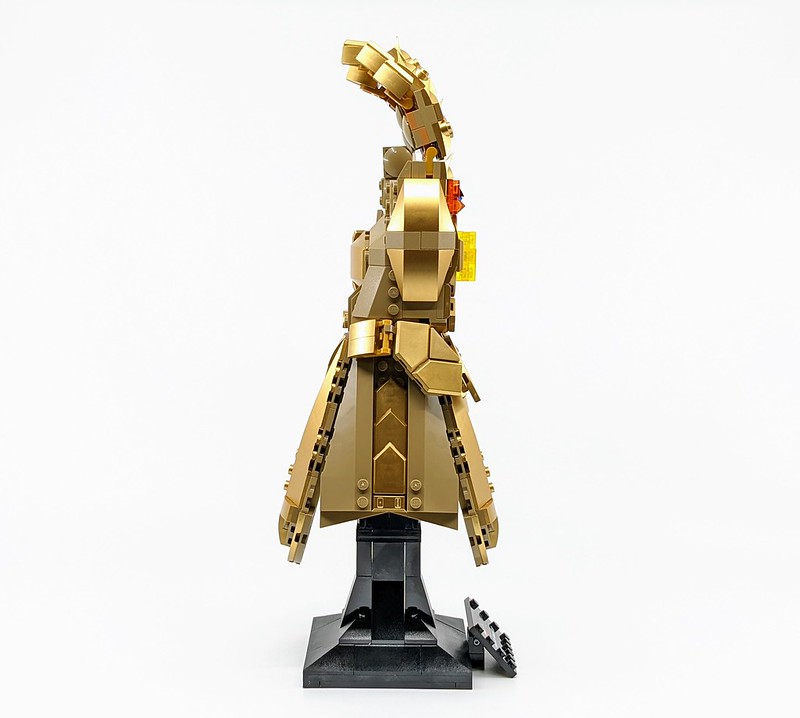 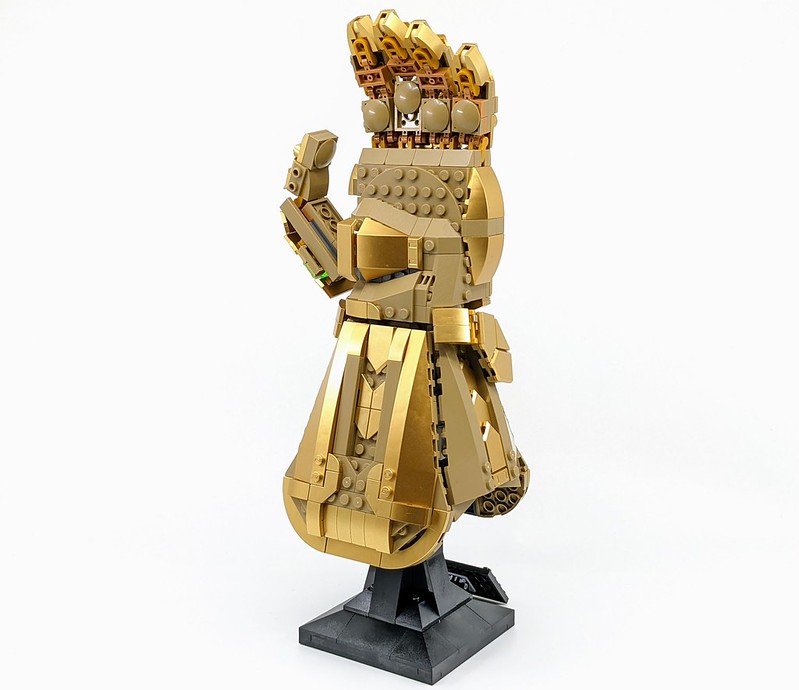 The build begins with the black plinth, which has become a standard in all the displayable builds. This not only provides a display base but also a central core on which the Gauntlet is built. This is much smaller than the helmet or head builds. It also offers varying connection points including simple studs, along with ball-jointed and plate clips. Once the core is complete, it is time to forge the gauntlet. Much of the armour detailing around the body of the gauntlet is constructed from clip-on plates. A similar method used for the fingers of it as well. Thankfully the digits of the most powerful glove in the universe are all hinge-jointed, allowing them to be moved and positioned in a similar motion to actual fingers. So with a little tweaking, you can recreate the iconic snap. 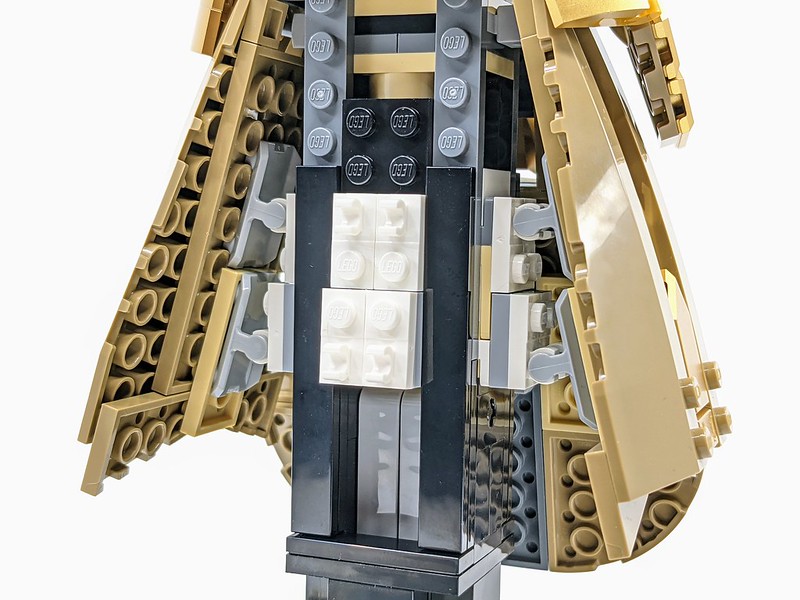 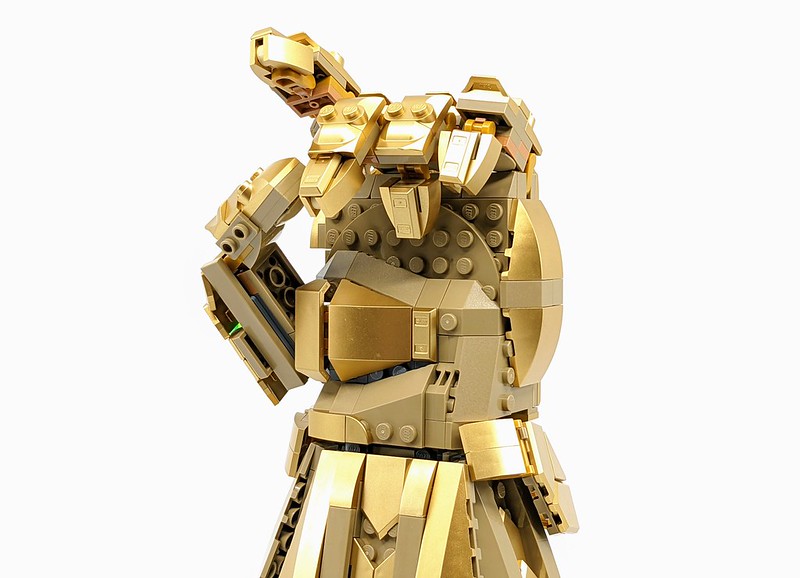 The colouring of the Infinity Gauntlet is part of its visual impact and as a rule, golden LEGO elements aren’t readily available. Thankfully an impressive number of drum lacquered bricks have been deployed for this set. In fact, it features the most golden elements of any set so far. The shiny pieces are neatly mixed with sand yellow ones to recreate the grandeur of the Infinity Gauntlet. But the gauntlet merely acts as a conduit for the six Infinity Stones. These are built independently of the rest of the set but fit nicely into the various sections on the gauntlet. The stones are simply crafted by transparent pieces all matching the colours of the MCU versions of the stones. 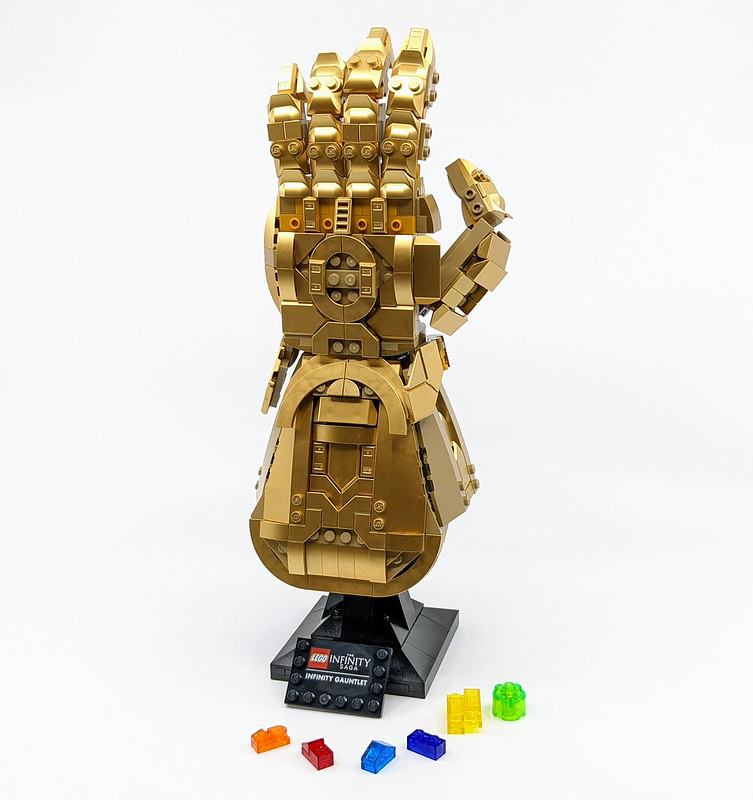 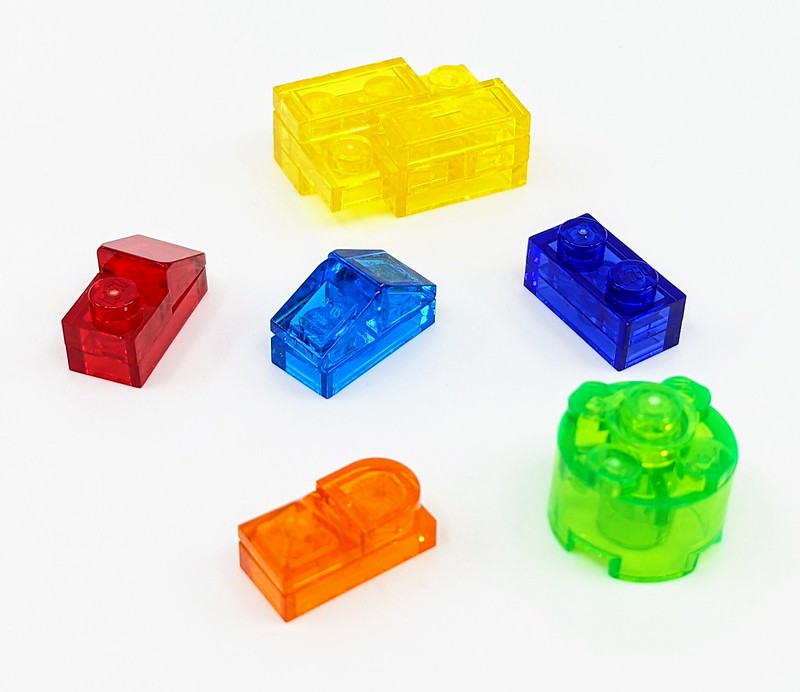 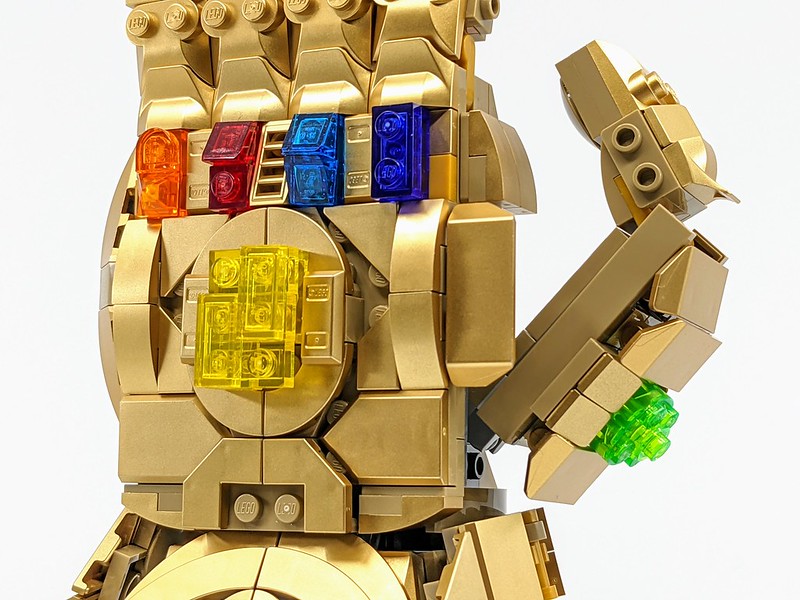 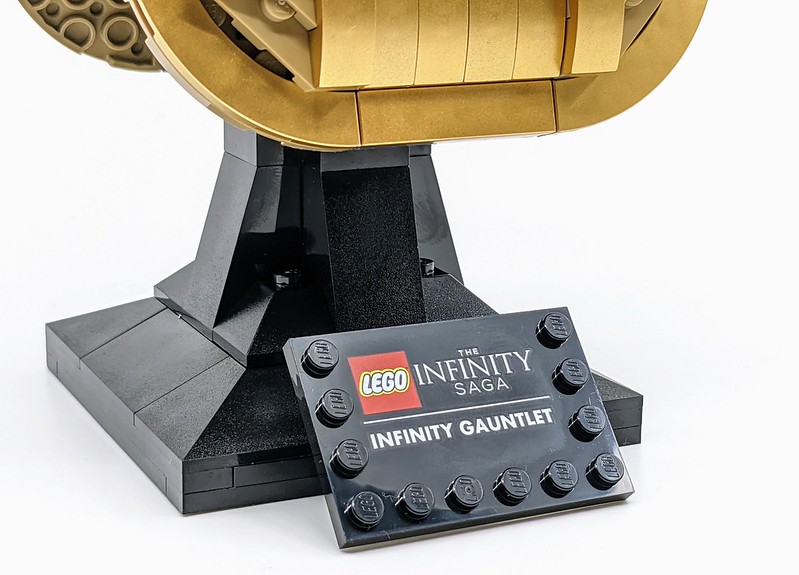 The whole set is finished off with a 6×4 plate, featuring the name of the set and the LEGO Infinity Saga logo, printed not a sticker. This connects to a 2×2 hinge played on the base of the display plinth. I appreciate the consistency of this area of the build. Although each of the similar displayable sets is focused on very different subjects, they fit nicely together thanks to the display bases. I really like these sort of sets and this is one of my favourite ones so far, it looks great and does a decent enough job of capturing the look of the real Infinity Gauntlet. I hope we also get a similar style Nano Gauntlet, in fact, there are a few Marvel props that would suit this new line of sets, such as Stark’s Arc Reactor and Mjolnir.