The epic battle between the Avengers and the Mad Titan Thanos has played out across the MCU for over 10 years. Before the penultimate showdown between Iron Man and Thanos saw the Infinity Saga come to a close. Now a new 4+ set once again pits Stark again The Mad Titan. But don’t expect armies of heroes and villains duking it out, instead, the pair have a small spacecraft and a projectile-firing gun tower. As a 4+ set, the basis is to offer an easy-to-build experience which younger builders can easily tackle. This means the sets often offer unique parts and printed elements. So how does this latest LEGO faceoff between Iron Man and Thanos shape up? Let’s find out. 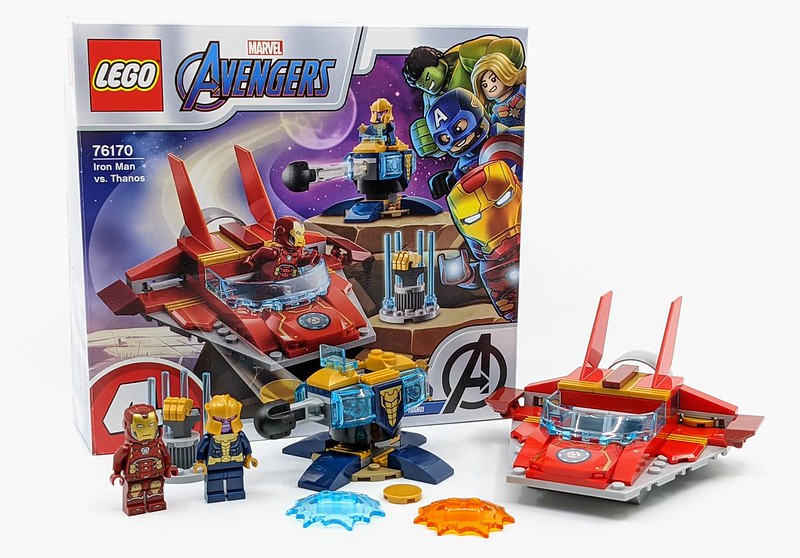 LEGO® Marvel Avengers Iron Man vs. Thanos (76170) puts superhero action into kids’ hands. This versatile, buildable action toy is designed to encourage shared play and developmental growth. Empower young superheroes! Made with budding builders in mind, 4+ sets are packed with cool details to ensure youngsters have a great play experience. Inside the box, each bag of bricks contains a complete model and character to get the play started fast. The set also includes a Starter Brick to get youngsters building with a partly constructed jet.

In order to fill the gap between DUPLO and Systems sets, a number of years ago the LEGO Juniors line was introduced and later rebranded as 4+. The main difference was, instead of being a separate theme like Juniors, 4+ offers easy-to-build sets within other themes. The 4+ sets also offer something known as a Starter Brick. These are often unique elements not used in many other sets. The Starter Brick in this set is a large angular piece used for the main body of Stark’s jet craft. 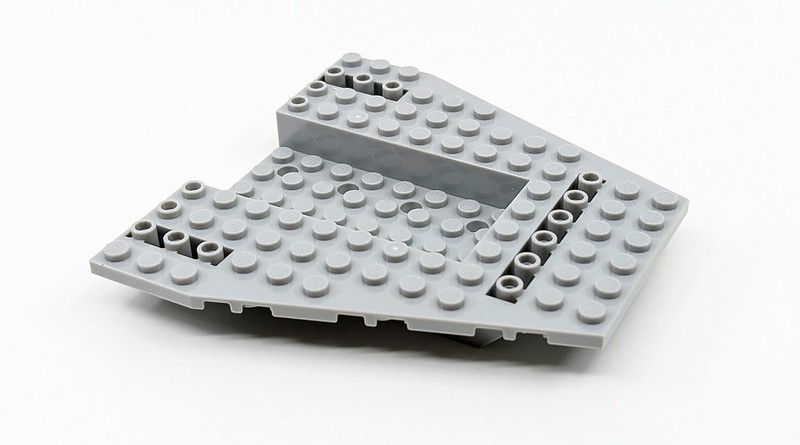 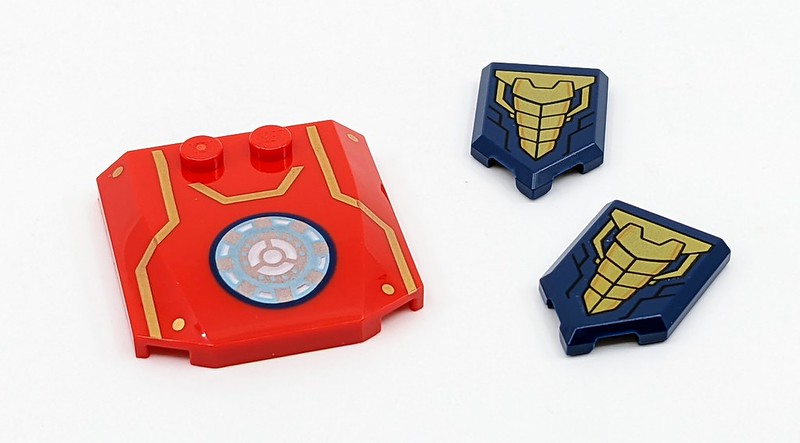 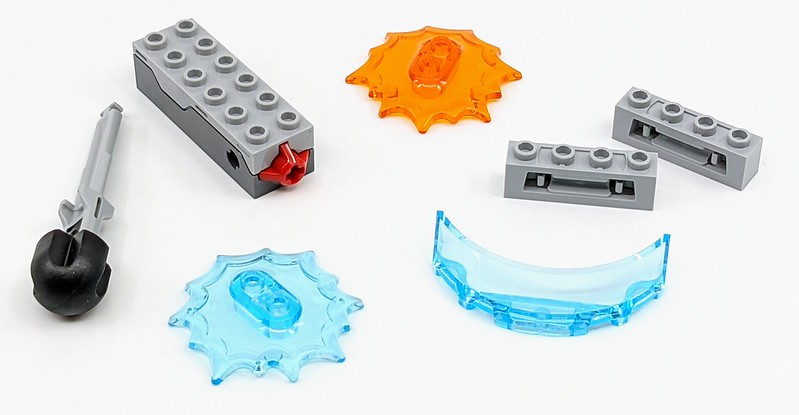 The craft is clearly tied to Stark as it uses the colours associated with the character’s Iron Man armour. These look pretty good, especially how the elements are placed with very few studs showing. The cockpit area is quite deep, so when the Minifigure is placed in there, it gets a little lost. But I do like the front of the craft which has a printed element for the front of the craft. Rather surprising for a set aimed at younger builders, are the inclusion of two disc firing bricks. These aren’t the most fun of the projectile firing elements but they work nicely with the design of the craft. 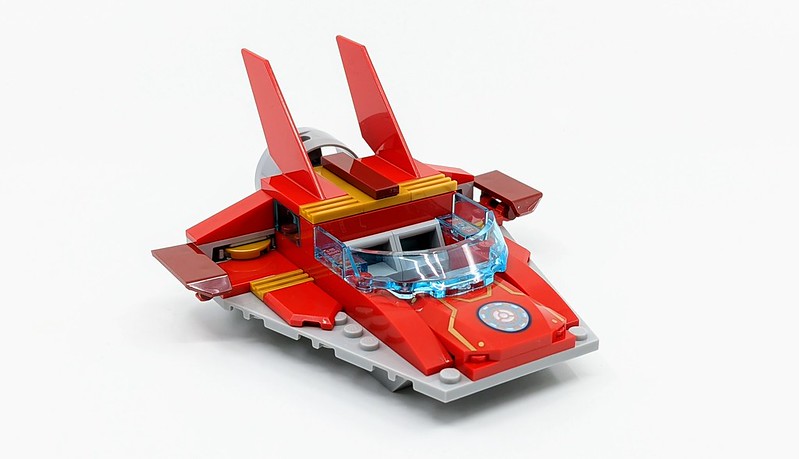 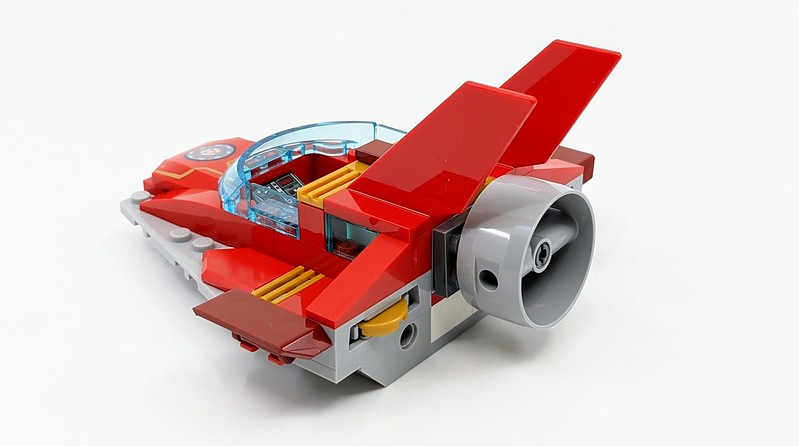 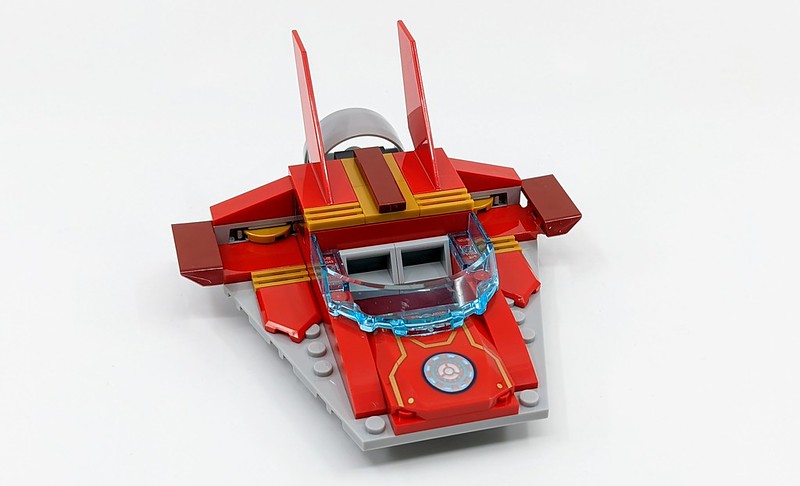 Thanos’ weapon of choice is a mounted gun tower. As with Stark’s jet, Thanos’s build is also themed to the Mad Titan’s wardrobe, so the gun tower is mainly dark blue with gold trim, which is decorated with a couple of printed NEXO shields. There’s also a 2×6 sized brick, in which a rubber-tipped projectile can be loaded. The Light brick style button makes it a lot easier to not accidentally fire the bolt merely by looking at it like the flick missiles do. The cockpit section also spins around, which is far more fun than it should be. 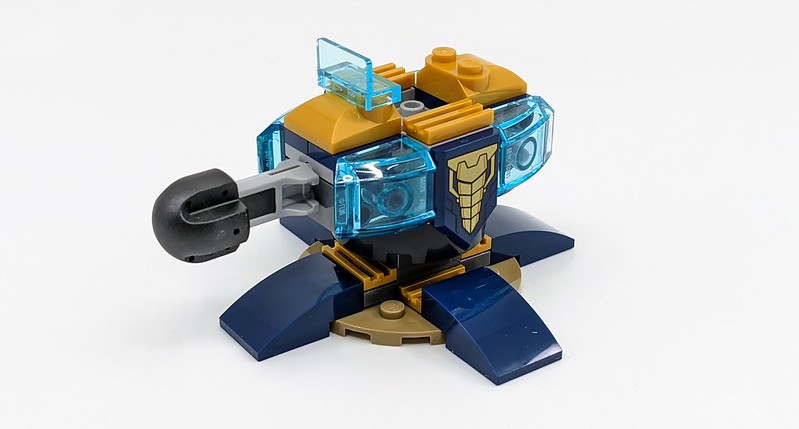 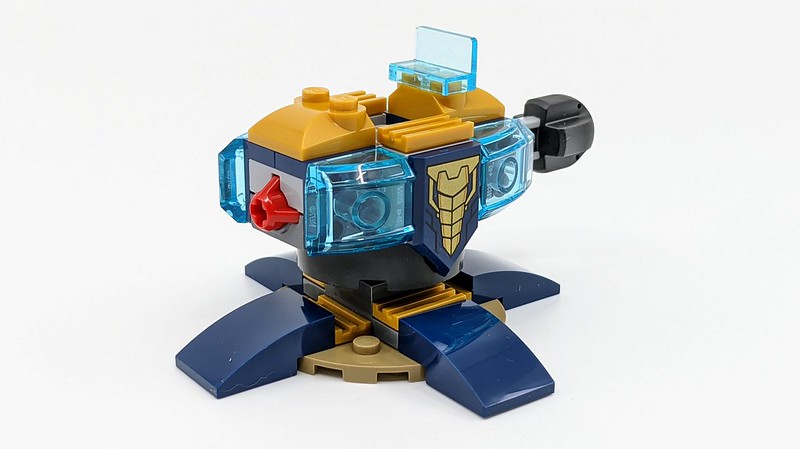 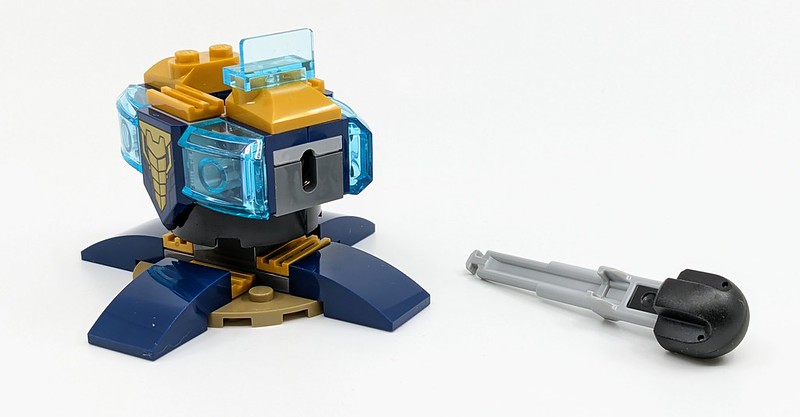 As well as the two builds connected to the included Minifigures, there’s also a snazzy little minibuild. This is a plinth on which the Infinity Gauntlet is placed. This uses the first element first introduced in the Ultra Agents theme. It’s not as elaborate as the BigFig Gauntlet but it can be placed into the hand of either Thanos or Iron Man. 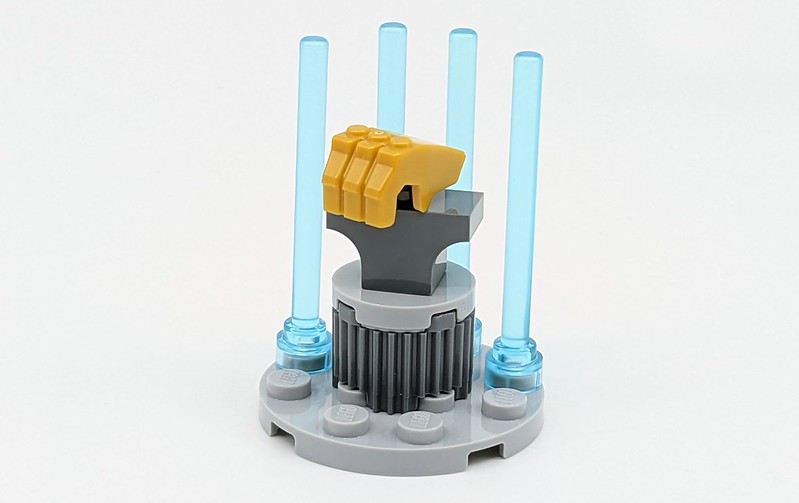 The set features two Minifigures and has the name of the set would suggest those are Iron Man and Thanos. Iron Man has appeared in many of the Marvel sets, with the style of his helmet tweaked in recent years to be a single element, instead of one with a flip-up face-plate. The version here is not unique to the set and can be found in both the Wrath of Loki and Helicarrier sets from last year and was also included in a recent LEGO Avengers magazine. 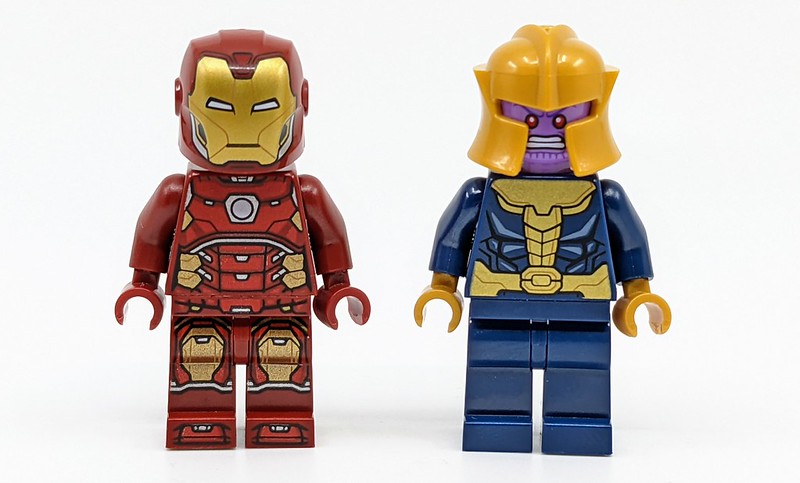 With the Mad Titan looming large over the Marvel universe, he’s appeared in a few different sets and his appearance has vastly changed from each one. A couple of sets has portrayed Thanos as a BigFig, but here he’s a standard Minifigure. The design is similar to that from the Thanos Armour Mech suit, although he’s been to a new tailor and no longer has printed detail on the legs, which makes it feel a little plain. 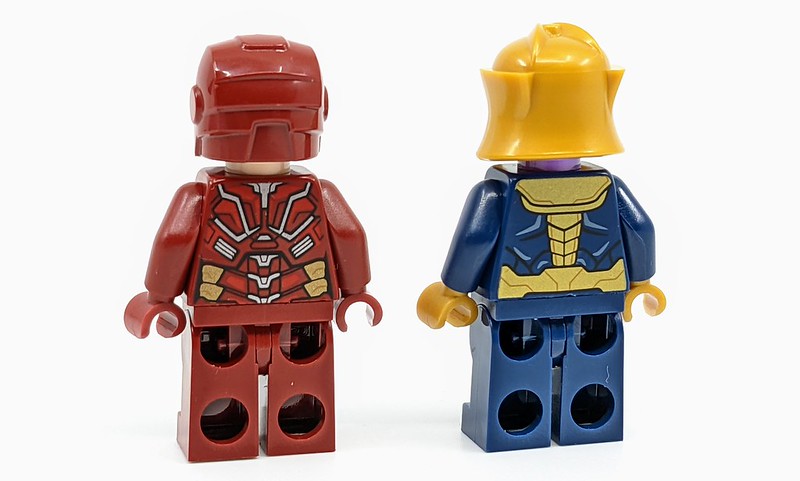 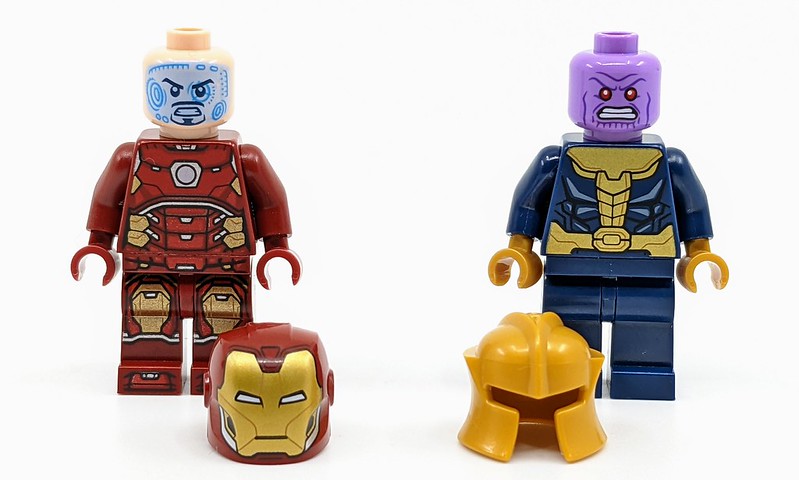 Each Minifigure also includes a blast-effect display base. These are similar to the power blast effect elements featured in a number of the recent superhero sets. Thanos has an orange-coloured one, with Iron Man standing atop a blue one. 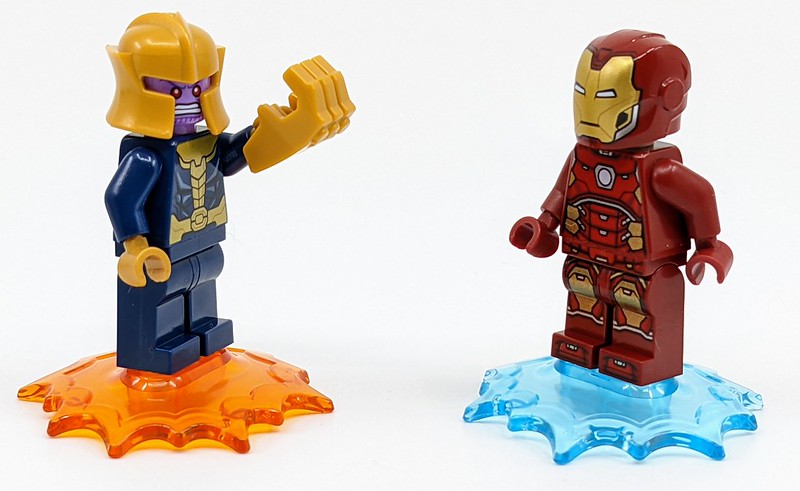 Despite the simple focus of these 4+ sets, they have some decent elements, especially with decorated parts all being printed. As with many of the recent Spider-Man/Marvel sets, they are focused towards younger builders and will have limited appeal to adults. Whereas other sets have had interesting Minifigures which AFOLs would be drawn to, that’s not the case here. Iron Man has appeared in other sets and Thanos is a little rarer in this form but lacks the detail of previous versions. As a 4+ set goes, this is a great way to introduce younger kids to the world of LEGO, especially if they are fans of Marvel or superheroes. 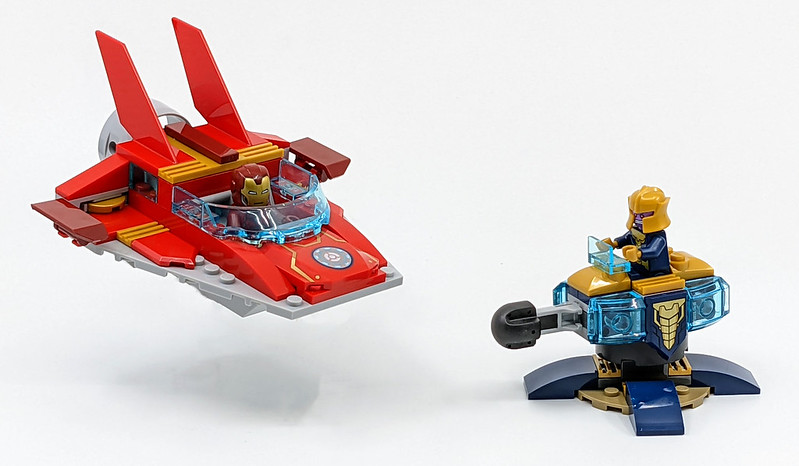