One of the first set from the new LEGO® Overwatch range made a surprise appearance a couple of weeks ago. This Blizzard exclusive set is based on the character Bastion, also known as SST Laboratories Siege Automaton E54. These peacekeeping autonomous robots were used during the Omnic Crisis, but one unique Bastion unit, severely damaged in the final battles of the war, was left forgotten for over a decade. The set features Bastion in the Orange Omnic Crisis skin and includes its feathered friend Ganymede. Both being mounted a buildable display plinth. Overwatch® fans will want to build and collect this exclusive Bastion figure in Omnic Crisis orange skin. This Overwatch toy can swivel at the waist, move its arms and features a small submachine gun in the right arm. Fans will also appreciate Bastion’s friendly bird sidekick, Ganymede, also in the unique Omnic Crisis orange skin. This Overwatch buildable toy is a Blizzard exclusive and only available in limited quantities.

Mechs have a varied history when it comes to LEGO, but one of the sure fire things is most are pretty cool looking. Making Bastion the perfect choice for the first Overwatch set. The build begins with Bastion’s legs, which make great use of the recent ‘Tile 2X2, Deg. 90, W/ Deg. 45 Cut’ element to recreate the legs pieces. These are connected to the waist section via micro ball joints, due to the chunkiness of the legs they are oddly angled to the rest of the body but as the feet are also connected via ball joints, you can get some decent poses and it can stand independently from the base. As the Bastions has two different arms, these are both represented in the LEGO build. The right hand arm includes a stud shooter to represent Bastion’s laser cannon and the left hand arm just features a ‘hand’ Both have various points of movement, thanks to micro ball joints and hinge plates. 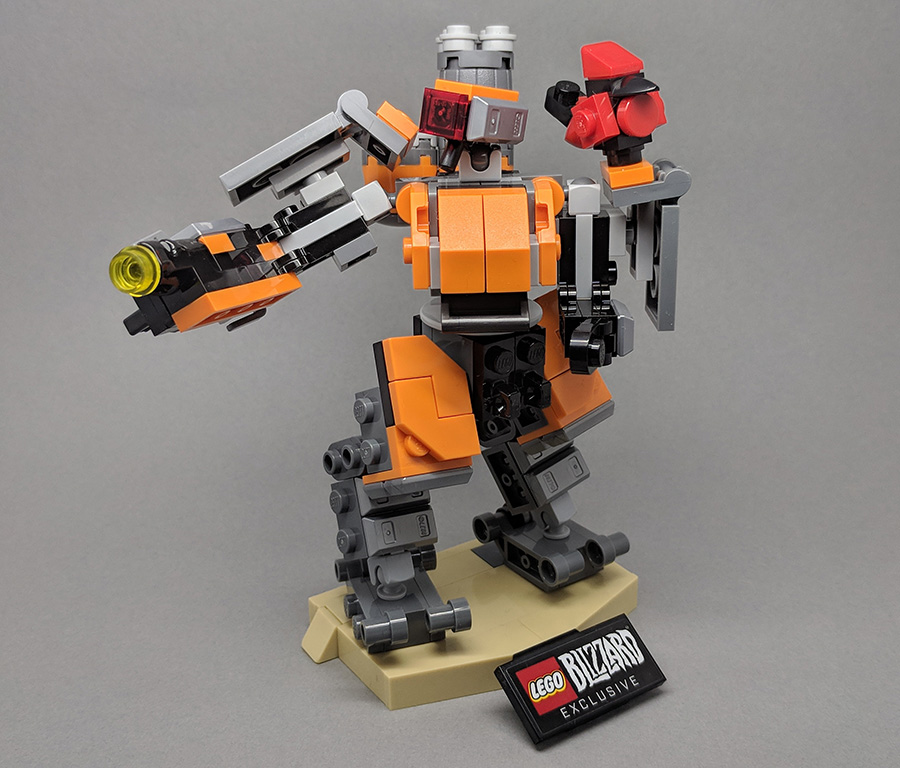 In the game Bastion can transform into a sentry gun and tank. Although the set can’t do that, the large cannon is featured on Bastions back. This is created with a series of 2×2 round bricks and plates, plus rather awesomely, a barrel. This whole thing is mounted to the body of the set, via a couple of ‘space skeleton arms’ which clip to a shield plate, that connects to the back of the mech. It’s my favourite part of the builds, as it looks great and represents the characters in-game appearance really well. 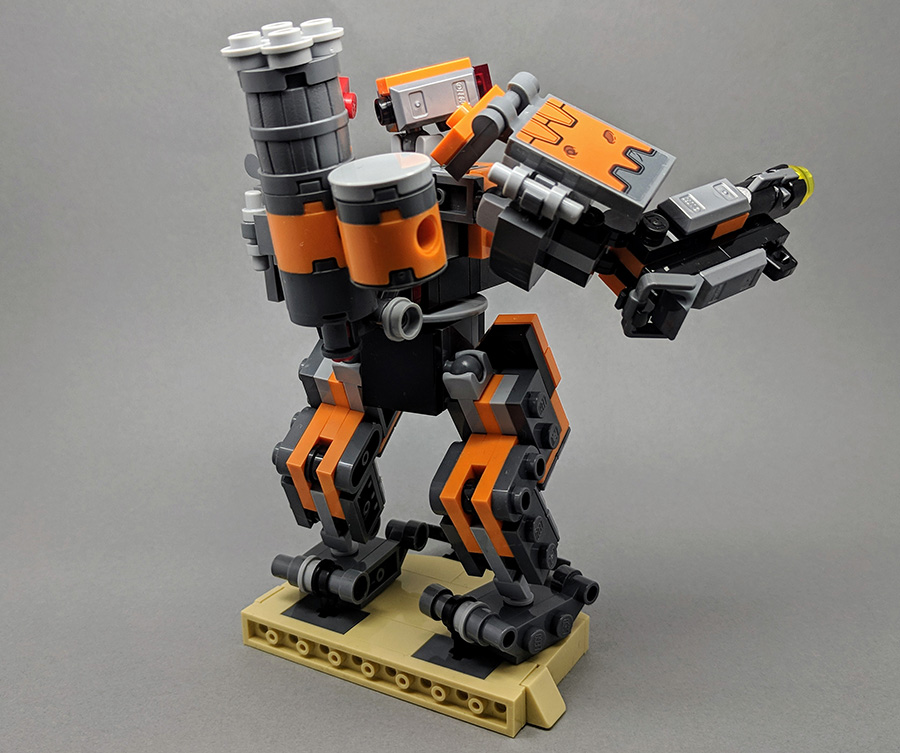 The base is made from tan coloured elements and features two grey 1×2 bricks with cross-axis holes, which allow you to firmly anchor Bastion to base. This also has a 2×4 flat plate, on which the LEGO and Blizzard logos are displayed, unfortunately via sticker. Talking of stickers two are also used on bastions, armour plates on the arms. These are located on two flag plates clipped to the top of each arm. Where you’ve also able to perch a little brick-built Ganymede, who is coloured red to match the Omnic Crisis skin colour scheme of Bastion. 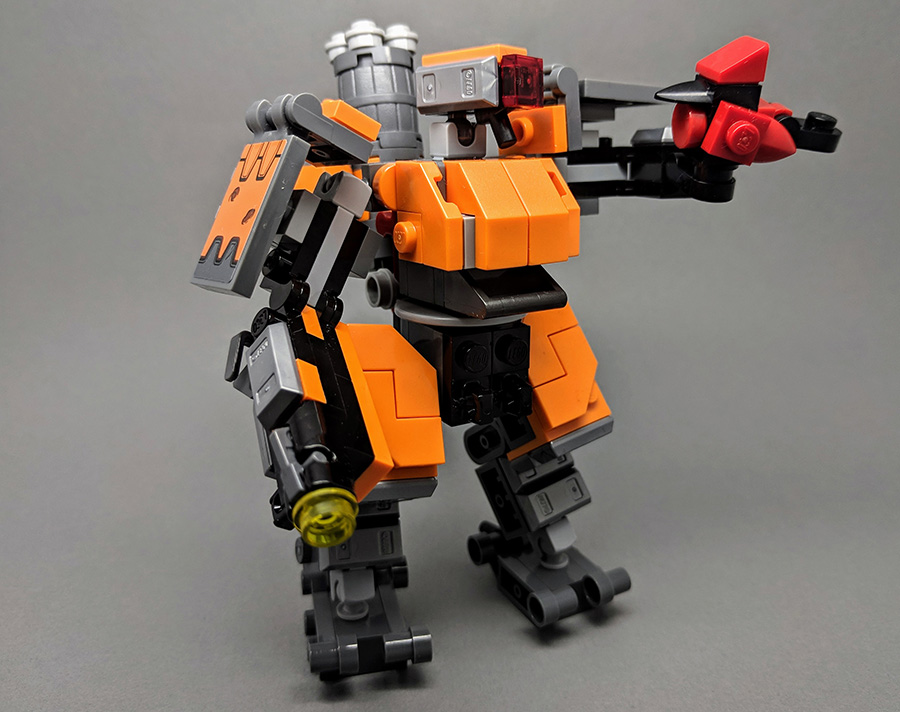 As a fan of the game, one of Overwatch’s strong points is the character design. If you watch the video above, this has been strongly reinforced with the games backstory. Not something you’d expect from a mere online shooter. When it was announced that there would be a partnership between LEGO and Blizzard to create Overwatch sets, most assumed that would result in BrickHeadz, but thankfully minifigure-scale playset have been created. Although this set doesn’t include a minifigure, it’s nearer to minifigure-scale than the recently revealed version of Bastion. This Blizzard exclusive set maybe smaller scale than that, but it still does a great job of capturing the look of the character. I like the little base, it isn’t needed for the set to stand but does make it more of a display piece. It’s a shame the name plate uses a sticker, and that the white LEGO logo is slightly misaligned with its yellow outline. I’m not sure if it’s worth the money but it’s still a decent little set and if you’re a fan of the game, a must have. However ordering from Blizzard Gear is problematic…… 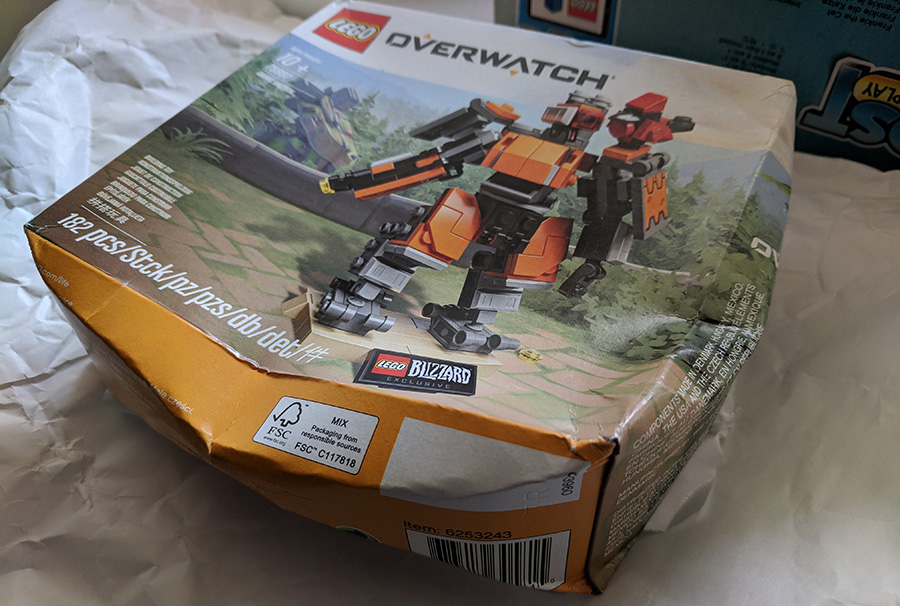 Now I don’t often talk about the packaging of sets, the one here is nothing special. However as you may have already seen on social media, or if you’ve ordered the set yourself, the way it has been packaged for delivery is disgraceful. Blizzard Gear have decided to post some sets is a ‘jiffy bag’ envelope. My set arrived in a crushed box, thankfully the bricks inside were ok, but that isn’t the point. When charging for postage, you’d expect what you’ve ordered to arrive undamaged. Blizzard customer service do not seem at all bothered, merely stating you can sent it back for a replacement or refund. However this is expected to be done at your cost and will not be refunded. Plus can take up to 3 weeks to get anything back. Thankfully other LEGO Overwatch sets will be available elsewhere. You can purchase the LEGO Overwatch Omnic Bastion set exclusively from Blizzard Gear Store.