LEGO® Jurassic World: Legend of Isla Nublar may act as a prequel to the first Jurassic World movie, but it’s clear it will be playing fast and loose with canon of the movies universe. If you thought a rideable dinosaur catching drone was a little farfetched then hold on to your hats as this set includes a mechanised T. rex! As the largest set in the new wave of LEGO Jurassic World sets, that unique looking dino robot has certainly got a lot of LEGO fans intrigued. But does a robotic dinosaur make for a fun LEGO set? Read on for the third of my LEGO Jurassic World: Island of Isla Nublar set reviews. Action-packed dinosaur adventures are guaranteed as youngsters play out a LEGO® Jurassic World 75938 T. rex vs Dino-Mech Battle and seek hidden treasure in the Isla Nublar volcano. The buildable T. rex toy dinosaur figure and bad guy Danny Nedermeyer’s Dino-Mech are both posable and have snapping jaws, while the buildable volcanic rock has an opening function to reveal a hidden treasure chest. This Jurassic World building toy also includes 4 minifigures, 4 baby velociraptor toy figures and a boat with 2 stud shooters and a tranquilizer gun to inspire kids to role-play Jurassic World scenes and create their own stories. The set comprises of three buildable component, the first of which is a rubber dingy boat. I was quite surprised that this wasn’t just a jazzed up version of the ‘rubber boat’ element. Thanks to it being a buildable boat, it’s a little more roomy than the single boat element. It has a couple of stud shooters mounted at front, an ammo storage box and a rather unusual rear engine. This uses a steering wheel element of all things, to replicate an engine propeller. The majority of the build is focused on a mechanised T. rex. Certainly something not seen in the Jurassic universe until now. The dinosaur uses a familiar looking colour scheme, the same used for the tour vehicles in the original Jurassic Park movie. It’s certainly an interesting build, with various points of articulation. These include the legs, feet, arms, head and tail. All of which allow for plenty of posing options, however I found the little spoiler elements above the legs would keep popping off, the same happened with the NEXO shields on the tail. I guess I was just being overly ambitious with my dino posing. 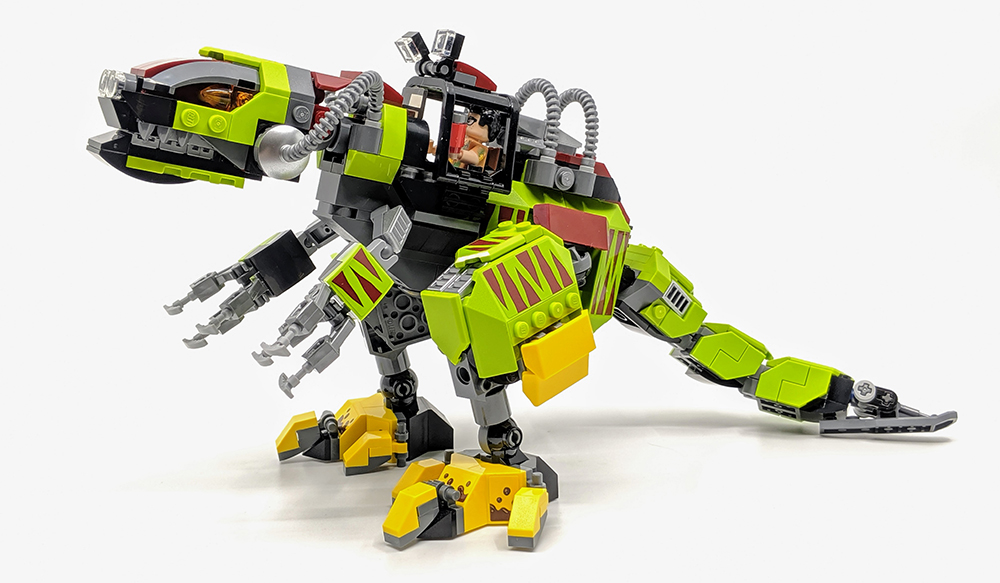 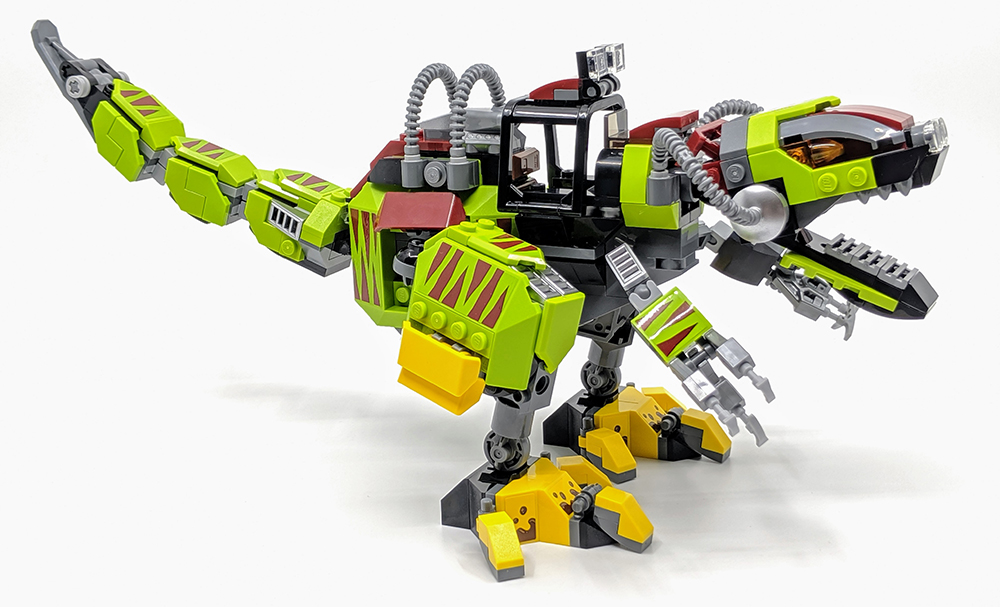 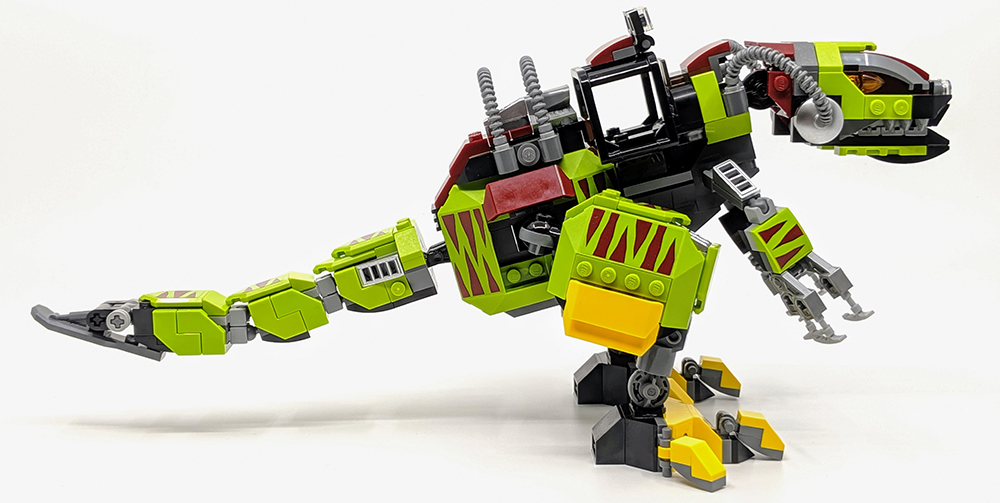 Being a robotic dinosaur mech, it needs a operator, so there is an cab of sorts located on the mechs back. This is incorporated quite nicely into the overall design of the build. Thankfully this doesn’t leave the set looking like Fred Flintstone’s quarry working dinosaur. I quite enjoyed piecing it all together and there are a surprising amount of elements used to build the mech. These includes some fun usage of parts, such as climbing picks for the claws and NEXO shields for various armoured scales. I do enjoy seeing how these shields are used in different ways. 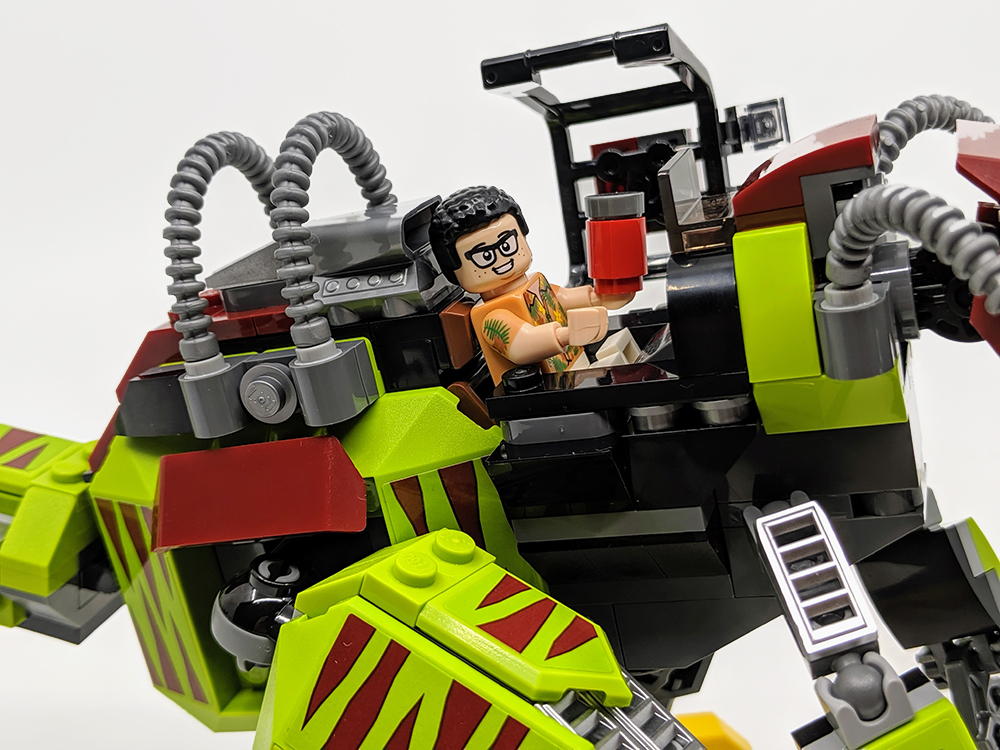 The final section you build is this rather cool volcano and just like the concession stand in the Dilophosaurus on the Loose set, this is something I didn’t focus on when the sets were first revealed. But turns out it’s quite a fun little build with hidden play features. Much of the volcano is built upon BURP elements, with a nice mixture of orange, yellow and transparent bricks to represent flowing lava. This isn’t just any old volcano, it splits apart to reveal a wealth of treasures. A separate platform is hidden within the volcano, when pushed forward it cause the two sides of the volcano to move aside and reveal a treasure chest overflowing with gold and jewels. It can be a little tricky to get the motion of the treasure platform to move smoothly. I found it coming apart if too much pressure is applied. Without the opening function, the volcano is still a cool looking build. I like the lava flow and the sneaky use of more NEXO shields. 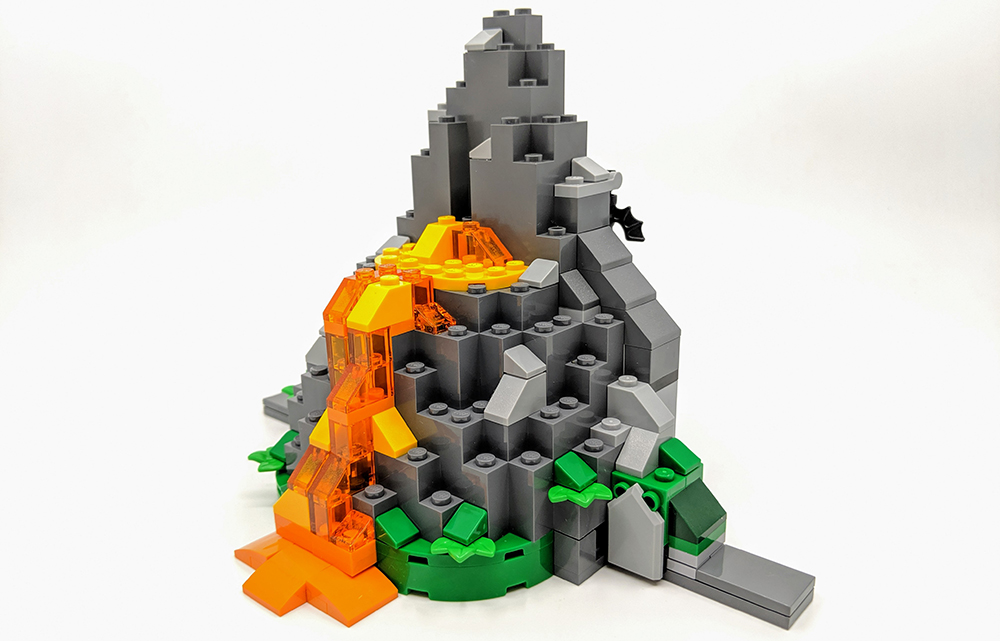 Without seeing the animated show these sets are based on, I think it’s clear it will certainly be moving away from certain realms of reality. Yes as if dinosaurs and trainable raptors weren’t wacky enough, a treasure hiding volcano and robotic dinosaur is taking things to the max. The mighty T. rex has appeared in quite a few sets before, both in the Dino theme and other Jurassic World sets. The one featured here is the same as others in terms of parts, but it has a new lick of paint compared to others. There are points of articulation in the legs, arms and head as well as the jaw. Joining the T. rex are four baby Raptors – Blue, Delta, Echo and Charlie. These use the new mini dinosaur elements. Despite their small stature, they are nicely detailed, with all four Raptors having their own unique appearance. I also appreciate that all four of the Raptor squad are featured in the set, there’s no having to buy multiple sets to get them all.

The set features four Minifigures, including three returning characters and a new face from the Isla of Nublar series. Owen is the most generic of the characters, with his appearance the same as in the Triceratops Rampage set. His head is also the same from the Fallen Kingdom sets from last year. Claire is unique to this set, with her appearance similar to the Fallen Kingdom sets, which is odd as these sets are based before the original Jurassic World sets.

Vic Hoskins returns and although he looks similar to the versions from the first wave of Jurassic World sets, he has black hair in place of the grey, previously used and his torso is technically new, even though it looks almost exactly the same as his older versions. The new face in the lineup is Danny Nedermeyer, he looks very similar to much-loved Jurassic Park character Dennis Nedry, even the name is similar. Not to mention the same sense of fashion, with the Minifigure having a garish shirt, which makes great use of the dual-moulded arms. All four characters have alternative faces, plus accessories including a tranquilizer gun, stun gun and soda can.

It may not seem an overly exciting set, but the build experience is fun and there’s some great use of parts in all three buildable aspects of the set, particularly the Dino-mech. I love that the iconic colour scheme of the JP Ford 4x4s has been used for the Dino-mech, but it does make me yearn for an official set of that vehicle. Although the Dino-mech has multiple points of movement, I did find bits popping off quite easily. As mentioned this may be because I was being a little too forceful with my dino posing. The volcano is a surprising aspect of the build, I expected it would just be a couple of BURPs stacked together and jazzed up a bit, but the opening function is quite cool, although the treasure within is a little odd. I’m a fan of the LEGO dinosaurs and I like that the T. rex included in the set is unique and not just the same as past versions.