Long before we had Jurassic World sets, dinosaurs roamed the LEGO® aisles in bygone themes including LEGO Dino. Those sets included the now legendary triceratops dinosaur. When the past LEGO dinosaurs were excavated for the LEGO Jurassic World theme, old moulds were repurposed for the new sets but the triceratops remained absent. Until now and the introduction of the Legend of Isla Nublar range. These new sets are based on an original LEGO Jurassic World animated TV show and one of the sets brings back the LEGO Triceratops. Which is the first set from the new range I’ll be taking a closer look at today, Welcome to Jurassic World review number one. 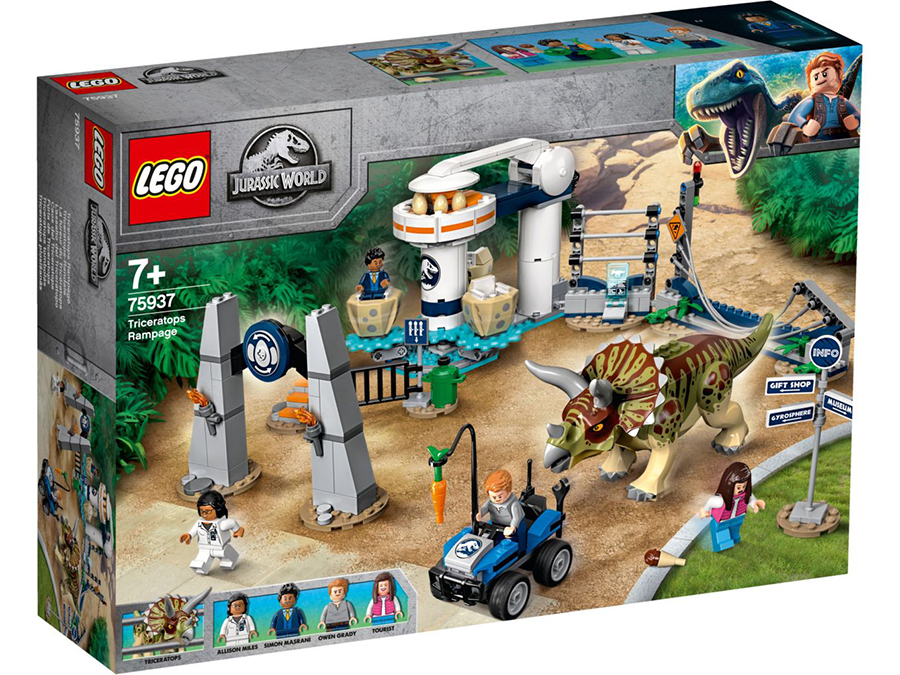 Youngsters will love creating exciting dinosaur action adventures with this LEGO® Jurassic World 75937 Triceratops Rampage building set. The colorful playset includes an Egg Spinner ride with 3 dinosaur-egg seats for minifigures and a spinning function, plus a gate and waiting area for the ride. There is also a posable Triceratops toy dinosaur figure, a collapsible fence ­and a minifigure buggy to play out a dinosaur escape and pursuit. This building toy for kids includes 4 Jurassic World minifigures to inspire creative role-play. 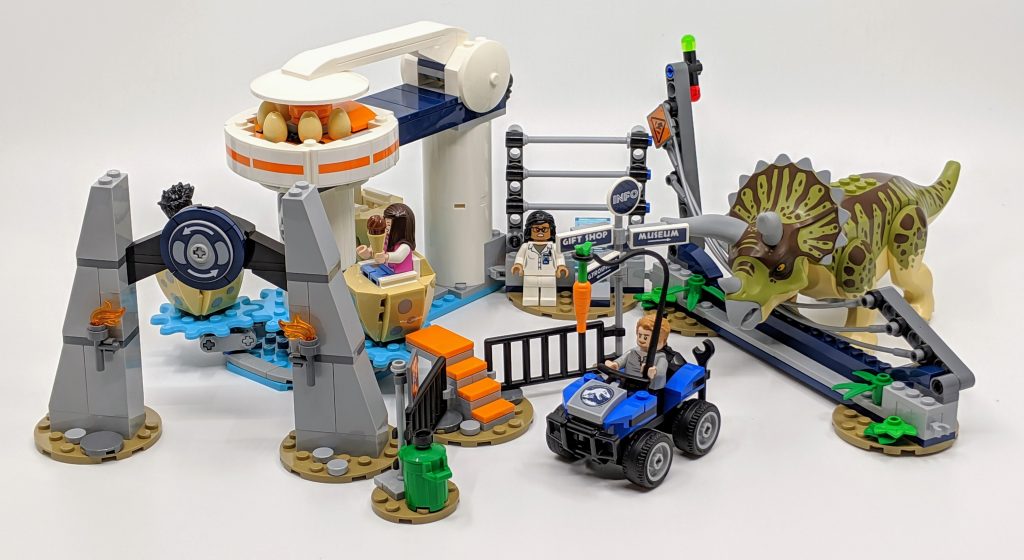 The set is focused upon one of the many dinosaur-themed attractions in operation at the Jurassic World theme park, you know before all the dinosaurs escaped and it was deemed a bad place to take the kids on holiday. So the set has a spinner-type ride, entrance gate, a dinosaurs ‘pen’ complete with one of the most sought after of the LEGO dinosaurs – the Triceratops. But more on that later. There are loads of iconic visuals from the Jurassic universe, from the lumpering dinosaurs to the smallest things like gates and signage. These smaller visual markers are all apparent in the smaller sceney elements you start the build with. These include the entrance to the Egg Spinner ride, with is styled after the famous Jurassic Park gates. This has a odd sign which shows a trio of eggs and arrows, obviously to represent ‘egg spinner’ but I would have liked to have seen the name of the ride, maybe just above the spinner sign. The ride entrance is joined by a simple queue barrier, with stairs to access the ride and a nice little information sign. Although achieved with stickers, I like that it features the iconic Jurassic font and has nods to other sets in the Jurassic World theme. It means you can combined them should you wish to create your own dinosaur-filled theme park, what’s the worst that could happen?

An additional piece of scenery is a very cool section of the security fencing used to keep the dinosaurs at bay. The larger section of this has a simple but really awesome play feature. This features three flex tube elements, which are thin, rubbery rope-type elements. They connect to a couple of different sized Technic beams via 1×1 shaft plates. The smaller of these Technic beams can be dropped to cause the fence to collapse. This looks very cool and is one of my favourite parts of the set. The biggest part of the set is the Egg Spinner ride, it’s best described as an almost old fashion food mixer looking thing. It’s actually meant to be a styled on one of the egg incubators, used to hatch the various baby dinosaurs. On the top section, where the eggs are on display is a turn dial, when this is turned it causes the base of the ride to spin, thanks to the new gear wheel elements. The smaller gears also help to turn the three egg-like rider capsules, these spin as the ride goes around. It’s a satisfying action to turn the ride around and a fun thing to piece together, especially since all the working parts are neatly hidden within the ride. It would have been nice if the eggs also spun as the ride did, but it would have resulted in a less finished looking ride. 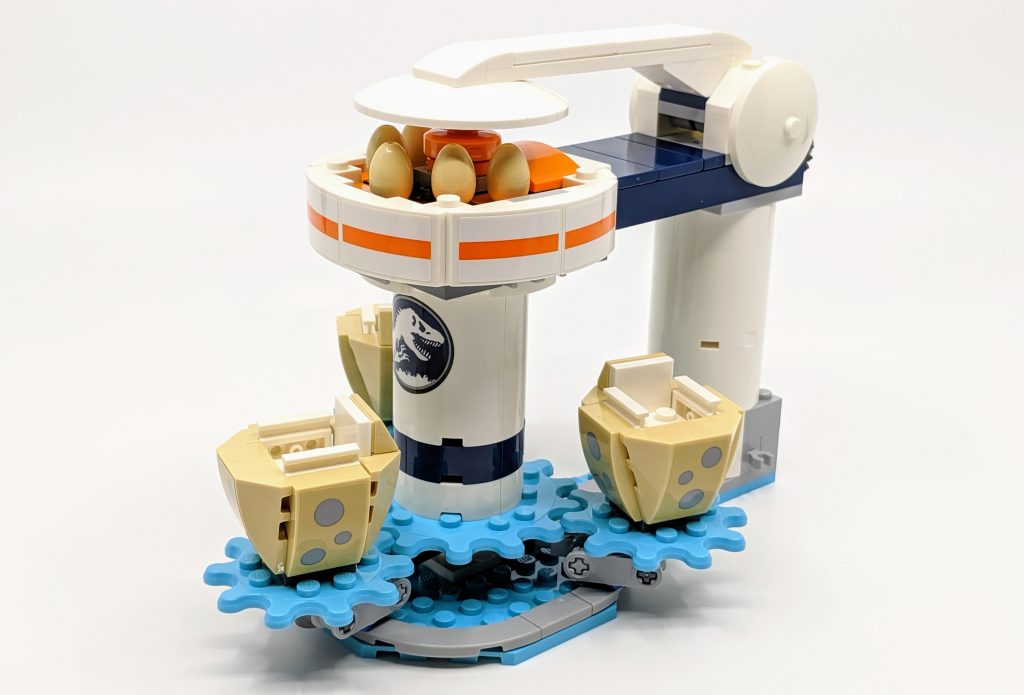 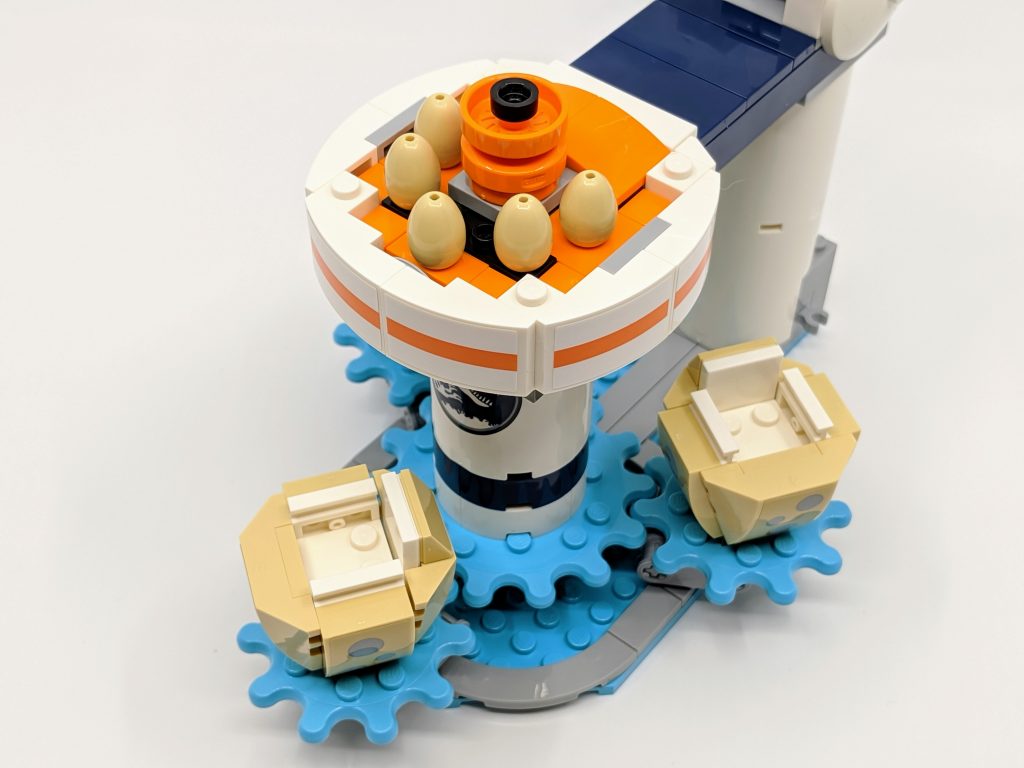 It wouldn’t be a Jurassic World set without a vehicle of some sort and this set features a small Jurassic World branded ATV. Despite being a small part of the overall set, it’s a decent little build. It’s like something you’d have in a polybag with a Minifigure, but it’s nice looking and detailed buggy. 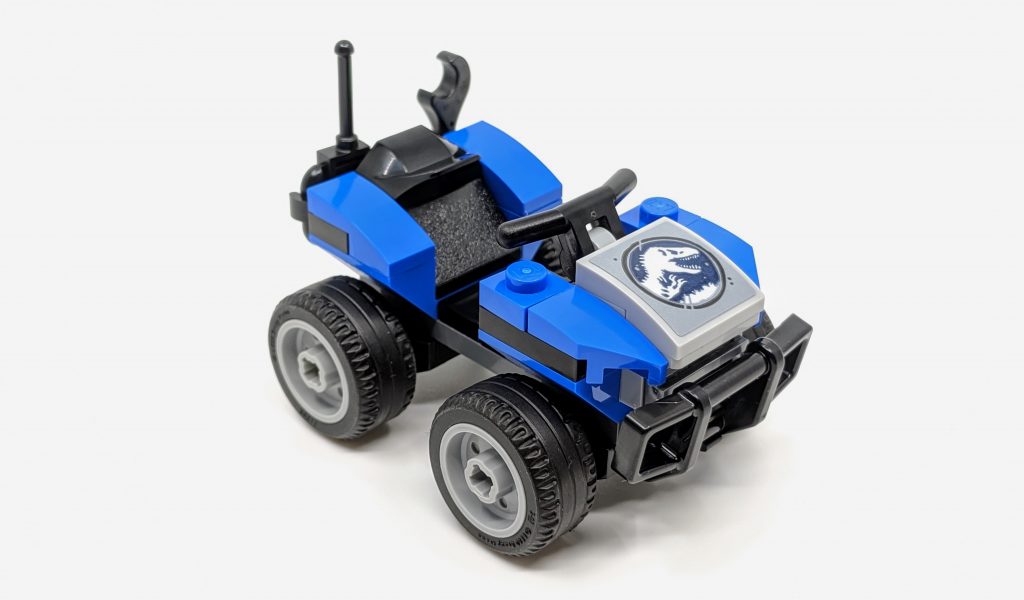 For most, the key draw of the set will be the dinosaur and this is only the second appearance for the LEGO Triceratops. It’s first and only previous appearance was in LEGO Dino set 5885: Triceratops Trapper. The exact same mould is used for the Jurassic World version, although it features a different colour scheme. As with most other LEGO dinosaurs, the legs and head are seperate pieces, which all connect with Technic pin like connectors. This also means these pieces are articulated. There are also six studs along the back of the Triceratops, which allows you to connect other pieces or Minifigures. 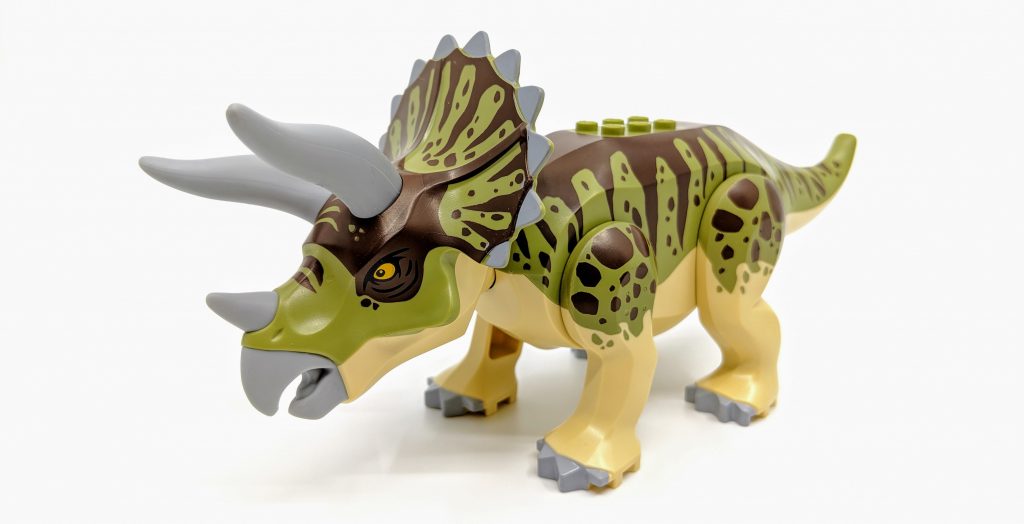 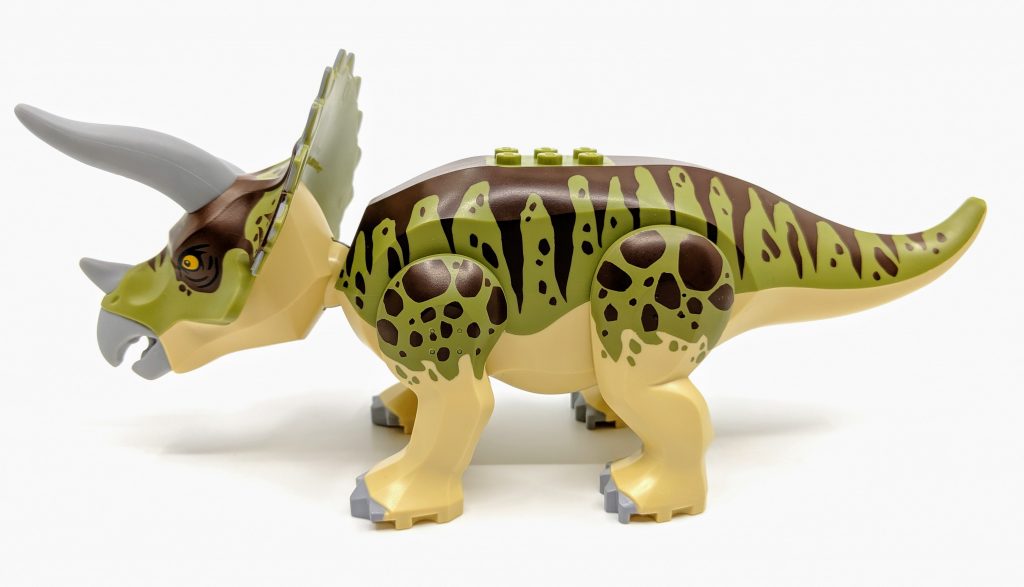 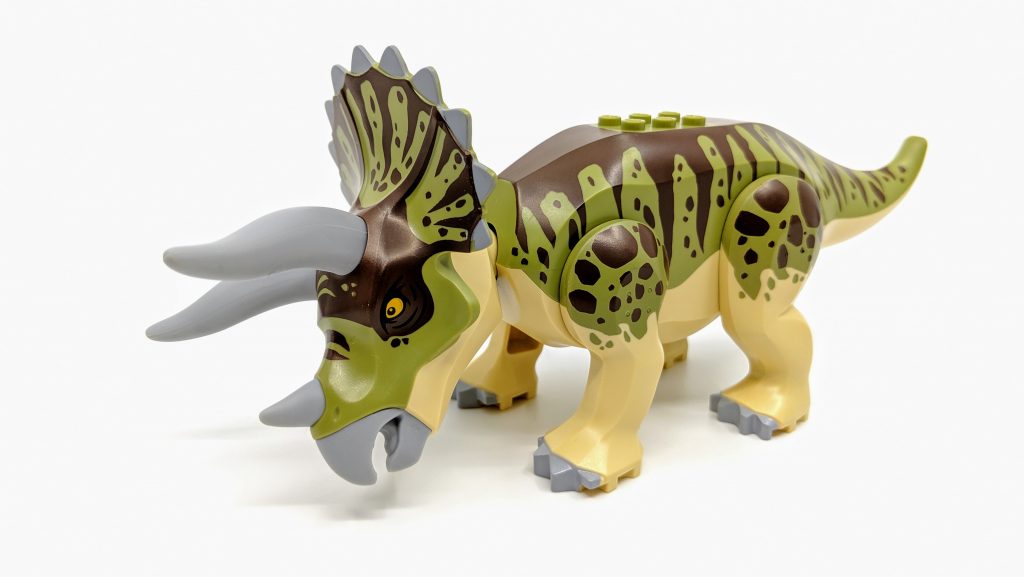 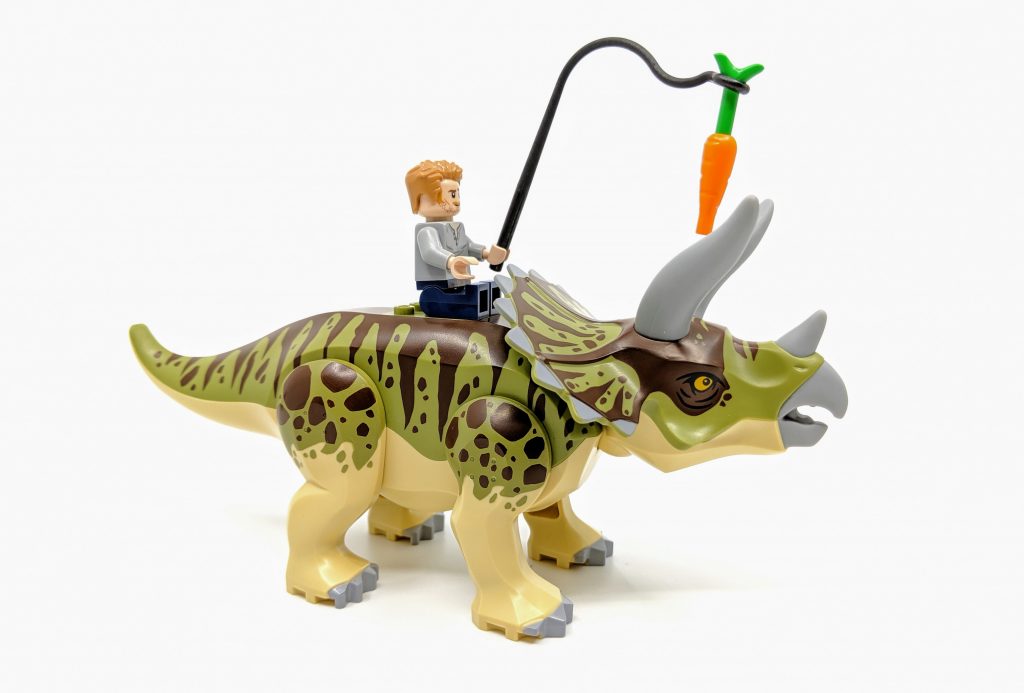 The set features four Minifigures including Own Grady, park owner Simon Masrani, a new character from the Legend of Isla Nublar series, Allison Miles and a tourist. Owen is similar to his past appearances, although he has a new for 2019 torso. Mr Masrani is a new for 2019 take on the character, with a new head print and torso. I quite enjoy the comedic take on the character in the animated versions of Jurassic World, this is shown in his alternate expression and the fact he’s enjoying the ride instead of sitting up in the control room for the park.

I’m guessing Allison is meant to be a scientist, as opposed to the ride operator. She has a unique headpiece, only found in this set, this is the same for her torso. This is the only set in the Legend of Isla Nublar range to feature Allison, whom I guess will be an important character in the upcoming animated series. Finally there is a generic female tourist, she has a unique torso, but the rest of her is made up of elements used previously.

The Jurassic World range has a varied fan base, kids love them and a surprising amount of adults due as well. With the big selling point being the dinosaurs. The Triceratops has always been a popular dinosaur and when the Jurassic World sets came out, there were many who went searching for the original. With this new set, there is no need to pay an over inflated price to add the Triceratops to your collection. But this set is far more than just the dinosaur, I really love the fence, it’s such a simple design but works well and look great. The Egg Spinner ride is a nicely design build, as mentioned, I quite like that all the mechanical elements are neatly hidden. It will be interesting to see how the set compares to the action from the new animated series coming to TV later this year.