75934: Dilophosaurus on the Loose Set Review

When the new LEGO® Jurassic World sets were revealed much of the focus was on the return of the Triceratops and that awesome T. rex mech, so much so the smallest set of the range was overlooked. I certainly didn’t pay it that much attention. However after building it for my next review I had to admit it’s a gem of a set, which is just as fun much as the larger sets. But what makes this set so good? Read on for the second of my LEGO Jurassic World: Island of Isla Nublar set reviews. Thrilling adventures await children when they construct Owen Grady’s drone and fly to save Hudson Harper from an escaped dinosaur in LEGO® Jurassic World 75934 Dilophosaurus on the Loose. The drone features 4 spinning rotors and a net shooter function to aim at the Dilophosaurus dinosaur model. This building toy for kids also includes 3 minifigures, plus a market stall in the shape of a dinosaur’s head with lots of accessory elements to inspire creative play.

It’s safe to say that the upcoming animated Jurassic World series may verge off a little more into the realm of fantasy, than the movies do. Which is why Owen can zoom around on this intersting looking rideable drone. It’s built around a jet engine element, which also acts as a delivery device for dino-catching net. A simple Technic axle topped with a 2×2 sloped dome element, lets you fire the net from within the engine part. But best thing about the drone is the four propulsion blades, which use a surprisingly cool element. Now the use of Technic pieces in System sets has certainly risen over the years, often allowing for some intersting features and functions in sets. For the drones oversized blades, a Technic steering wheel has been used and it’s amazing. The element has appeared in a handful of Technic sets over the years, most recently in large-scale vehicles such as the Bugatti Chiron; it’s never been included in a System set, but I’m sure you’ll agree it looks great. I quite like that a traditional seat hasn’t been implemented atop the drone, instead Owen awkwardly leans on it. 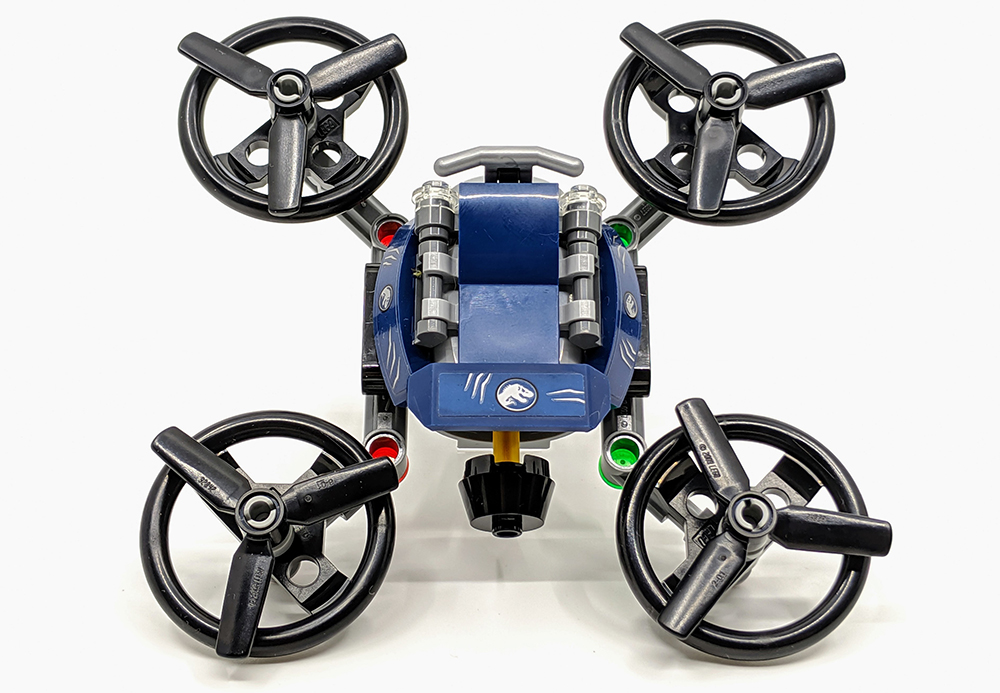 Along with the drone, the set includes a park concessions stand. This is styled to look a little like the head of a dinosaur. I like that it hasn’t been overly designed to look like a dinosaur. Instead the roof is coloured sand green and has teeth detailing around it. This is continued along the along the trim at the front of the stand. So the whole thing looks like the open jaw of a prehistoric beast. In the mouth is a wooden box, which is mounted on a hinged plate at the front and is filled with popcorn and a selection of posters. There are also of couple of explorer hats mounted on side of the stand, I can only assume these are a tribute to Dr Alan Grant. It’s a little cramped around the back, but you can just about stand a Minifigure there. 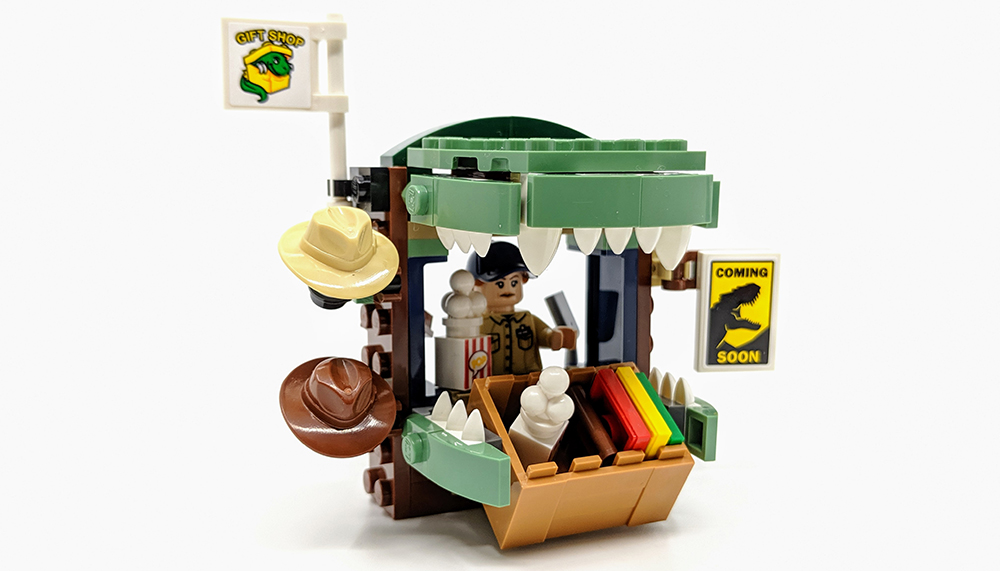 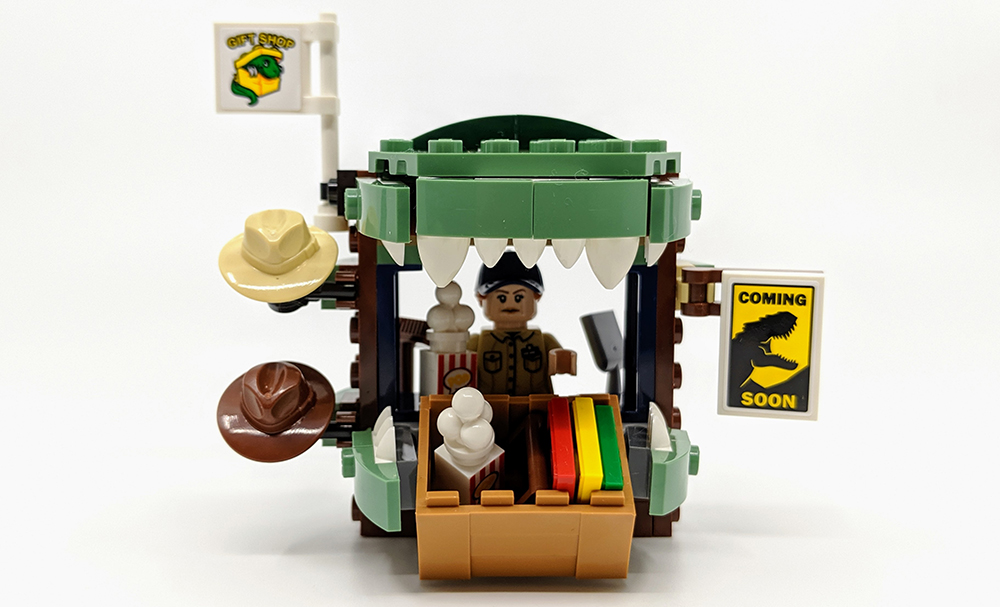 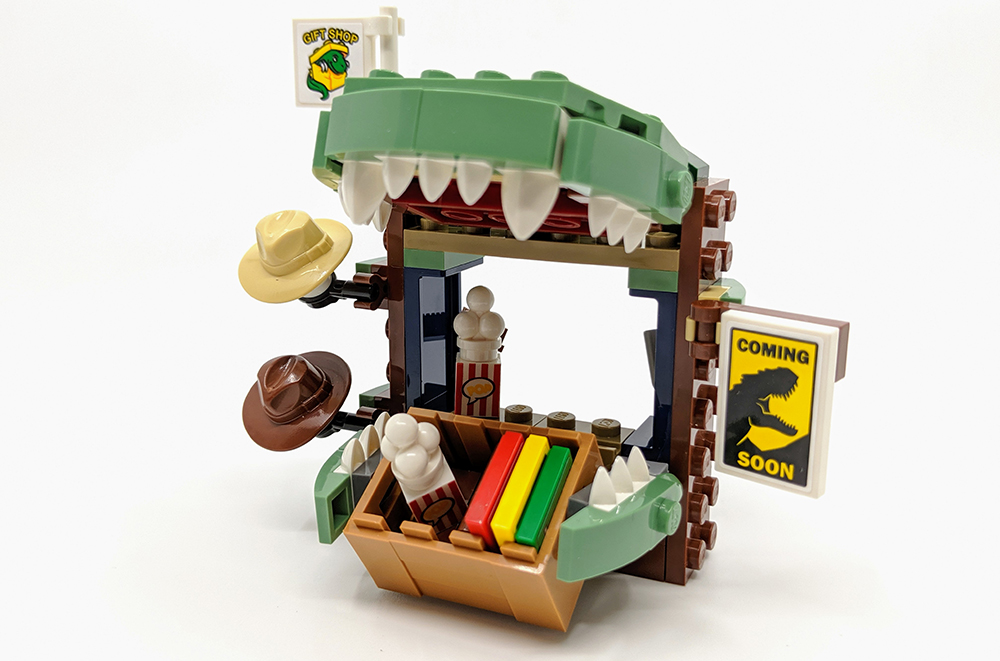 All of the graphic detailing is provided by stickers, although the popcorn boxes are printed. The stand includes a Gift Shop flag, which does look a little out of place compared to other Jurassic branding, but I still quite like it. There’s a poster for an upcoming dinosaur attraction, it looks like a T. rex. Considering the sets are based on the animated show, which takes place before the first Jurassic World movie; I assume it’s meant to be the Indominus rex. There are three coloured tile, which each feature artwork similar to stuff seen in the original Jurassic Park film, most obvious is the silhouette of a raptor from the Visitor Centre. 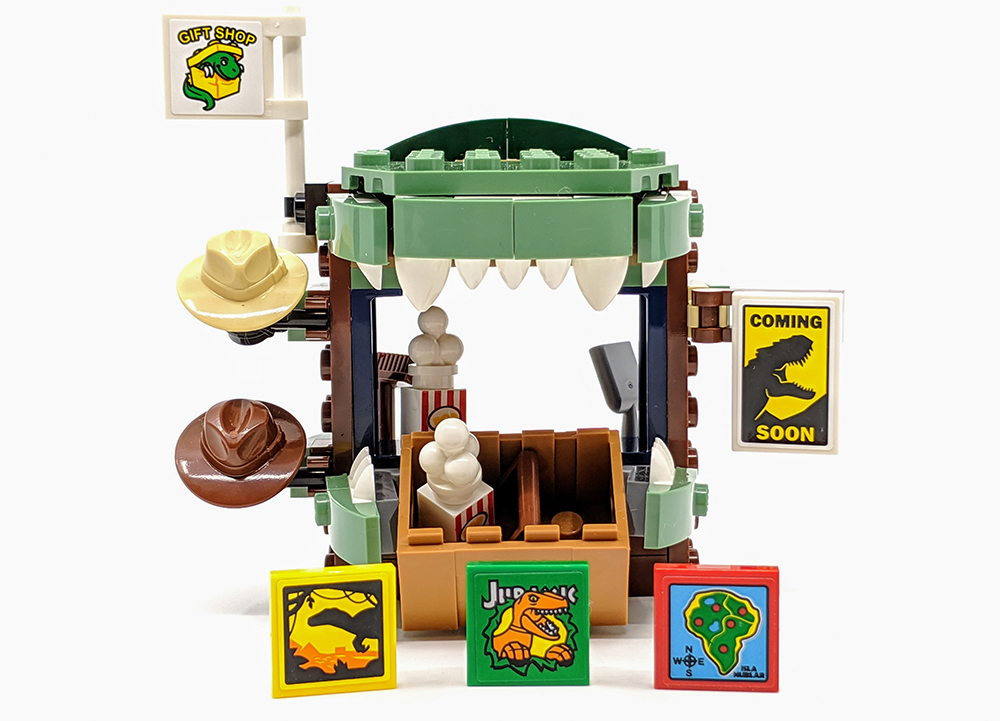 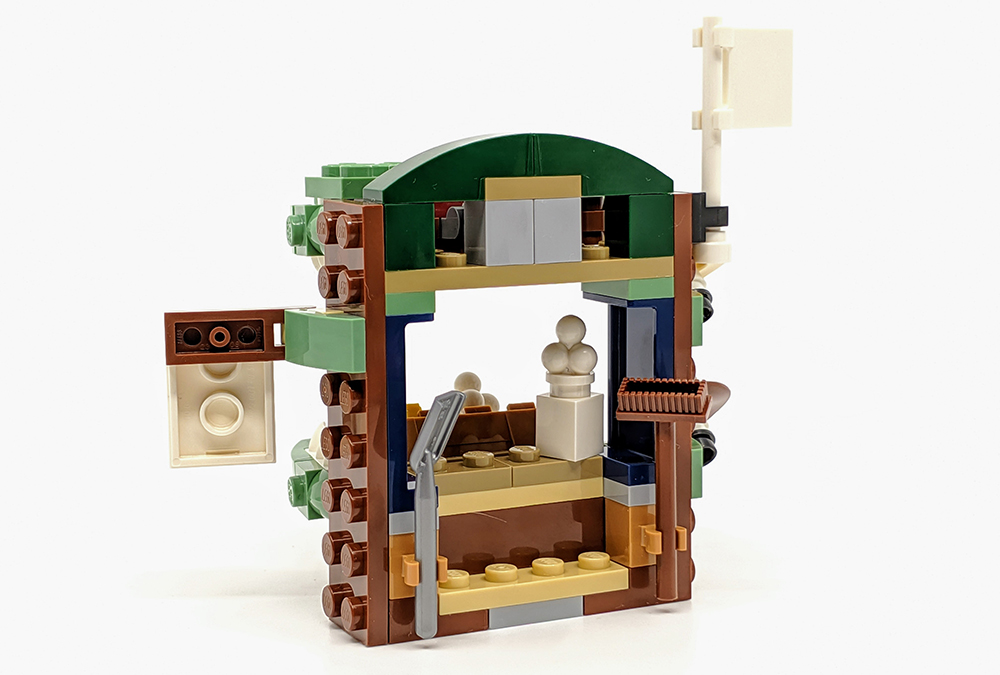 The set includes another all-new dinosaur in the form of the venom spitting Dilophosaurus. Now this species has appeared in LEGO for before, in fact in two of the first few LEGO Jurassic World sets, but the version here is a new mould. Unlike the previous version, this one is a single piece, so no moving legs or arms, but it does have a moveable jaw. It’s colour scheme is a little more muted, compared to its first outing. Now it’s more natural shades of green, instead of the lime green of the Dilophosaurus from set 2015 set. 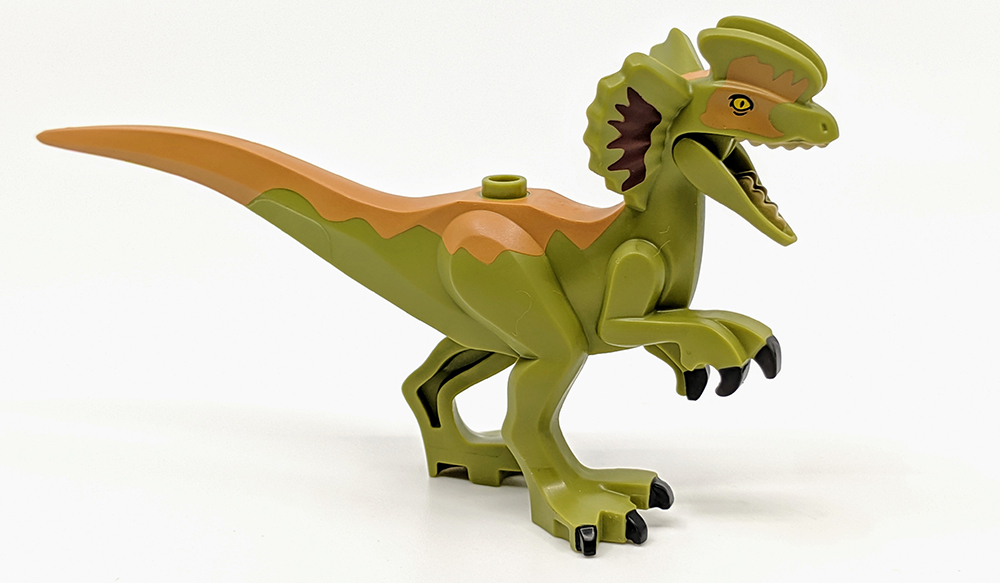 The set includes three Minifigures, rugged raptor wrangler Owen Grady, a park staff worker and another new character from the TV series, Hudson Harper. Owen is the same version as the ones included in many of the Jurassic World: Fallen Kingdom sets, so he has a little more facial hair and the same long sleeve and waist coast torso. The park worker is new for 2019 although only her torso is new and exclusive to this set. It features the Jurassic World logo on the back, which is quite cool.

The final Minifigure is Hudson Harper and he features one of the best torsos I’ve seen so far this year. It’s a Jurassic World branded red hoodie, worn over a Jurassic World t-shirt. I absolutely love this torso and as I mentioned in the intro, I completely overlooked a cool detail like this, when the sets were first revealed. All three characters have alternate faces. It’s dinosaur may not be as cool as some of those in other sets, but the rest of its content certainly makes up for it. As daft as a rideable dinosaur catching drone is, it’s actually a cool little swooshable craft. The use of the Technic steering wheel is rather clever and gives the drone an extra slice of coolness. I quite like the concessions stand, although much of the detail is stickered, I like the nods to the original films. I’m not entirely sure why the dinosaur has been redesigned from the original version, but it’s nice to have another unique creature to collect. Another highlight is Hudson’s awesome torso, anything with the Jurassic logo on is instantly cool, but this is particularly great. I’m glad I got the chance to review it, because I probably wouldn’t have given it a second look next to the other sets and I would have missed a decent little set.