From the very first moments of Star Wars’ inception, Droids have been a key component of that much-loved galaxy far, far away. Many of them have also inspired various LEGO® sets. From R2-D2 to BB-8, buildable Droids are a welcomed change from the numerous ships and recreated scenes. Inspiration for the latest buildable LEGO Star Wars Droid comes from EA Games’ Star Wars adventure Jedi: Fallen Order. BD-1 is introduced alongside Cal Kestis, who happens upon the Droid on the planet of Bagano. The loyal explorer Droid, then joined the crew of the Mantis as they searched for knowledge of the Jedi in Zeffo vaults across the galaxy. This new Droid instantly captured the hearts of Star Wars fans and a similar class Droid also appeared in the Book of Boba Fett. How well does this plucky little Droid shape up in LEGO form? Here’s an early look at the upcoming LEGO Star Wars BD-1 set. 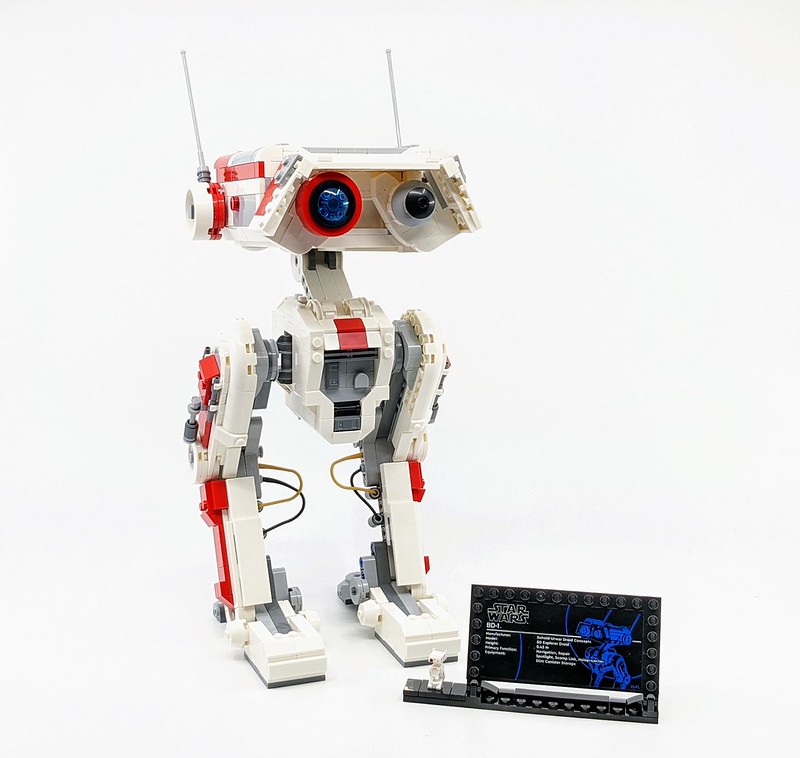 Star Wars Jedi: Fallen Order players can relive their epic adventures when they build and display this LEGO® Star Wars™ version of exploration droid BD-1 (75335). The head of this posable brick-built model can be tilted back, forward and sideways for maximum cuteness. Fans will be delighted by other authentic details, such as the translucent elements on the back of the head that indicate BD-1’s mood, plus a compartment for stim canister elements. An information sign and a BD-1 LEGO figure that can be attached next to the sign complete a charming centrepiece. 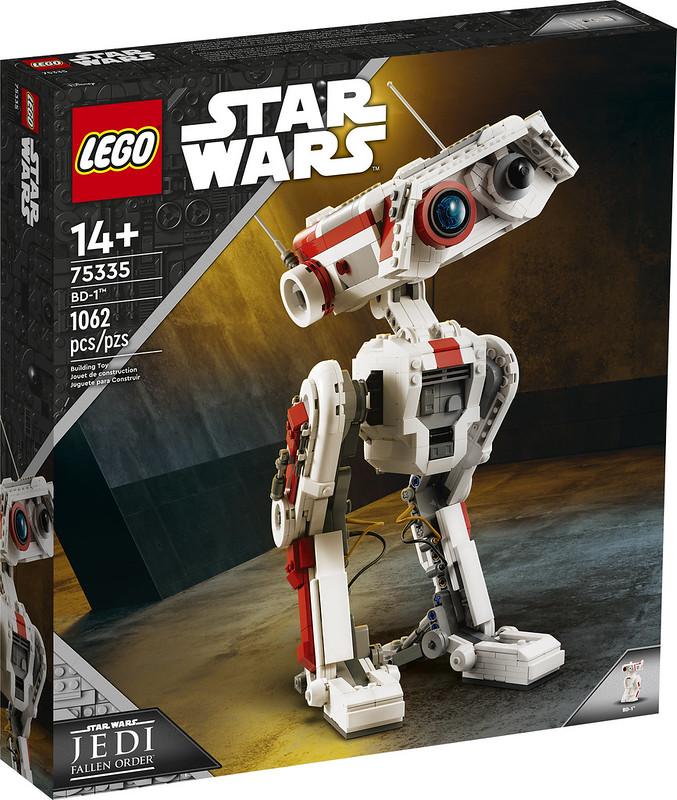 From the humanoid Protocol Droids to the versatile R2 units, there has been a long line of different Droids introduced across Star Wars films, TV shows and games. The BD droid is one of those characters who doesn’t need words to convey its character. After meeting Cal Kestis during the opening few hours of Jedi: Fallen Order, this inquisitive Droid’s personality became instantly clear. Its child-like wonder and plucky spirit evoke that of R2. As a character in a game, BD was also utilised as a means to discover in-game lore by scanning the environment, helping Cal get around and even providing a visual cue to health status. 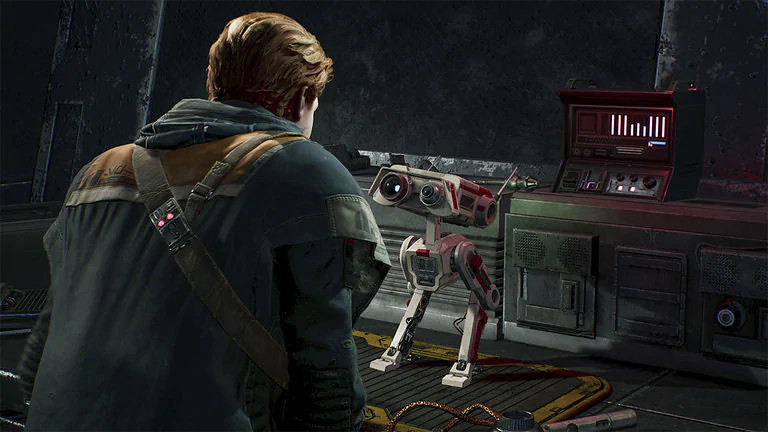 Its design is quite well suited to being recreated with LEGO elements. This bipedal little Droid is built in three main sections. Beginning with the body, this is the least complex section of the build. It also acts as the point to connect the legs and the surprisingly detailed head. The legs use a few Technic beams and pins to create the shape and stability needed to support the weight of the set. But they are nicely hidden with layered cladding of plates and tiles. The use of two different coloured whip elements to create a couple of exposed wires is a great touch. I quite like how the feet have been done. BD used them to clamour and hold on to Cal. So they are almost pincher-like. Although they don’t fully close together, they are angled to look like they do, yet still provide a stable surface to safely stand the Droid. 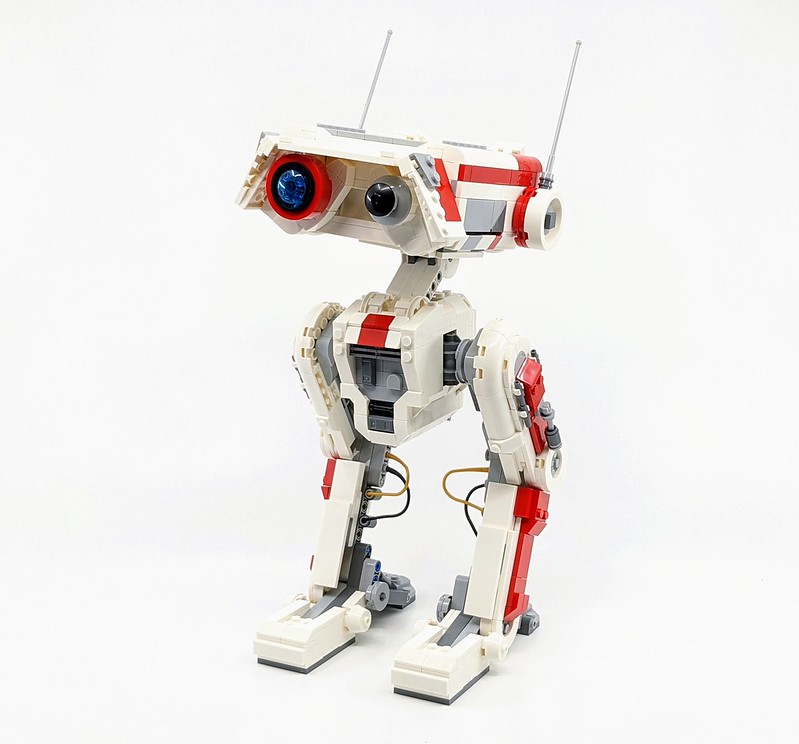 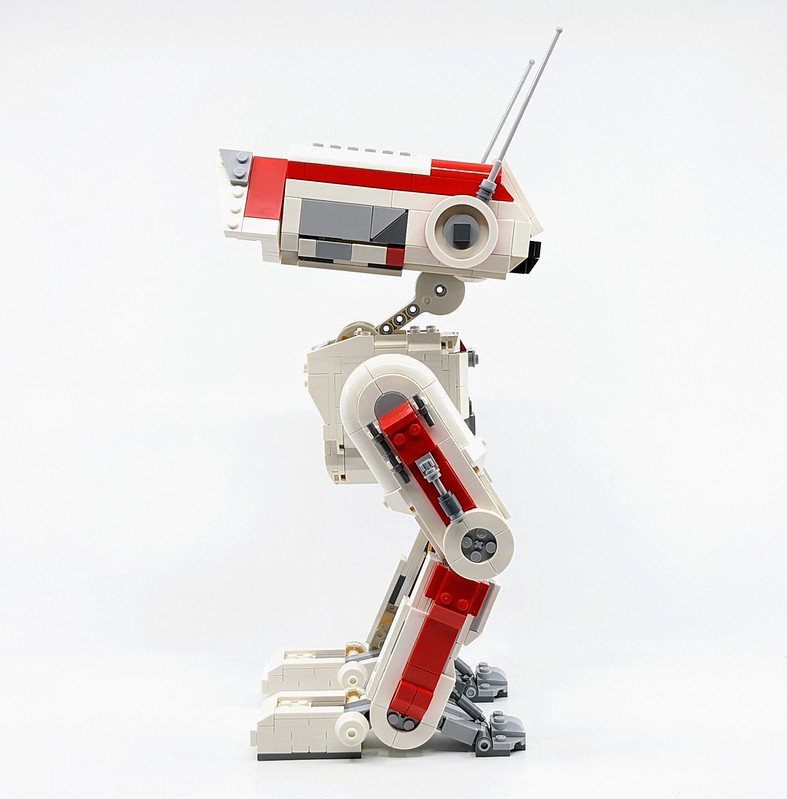 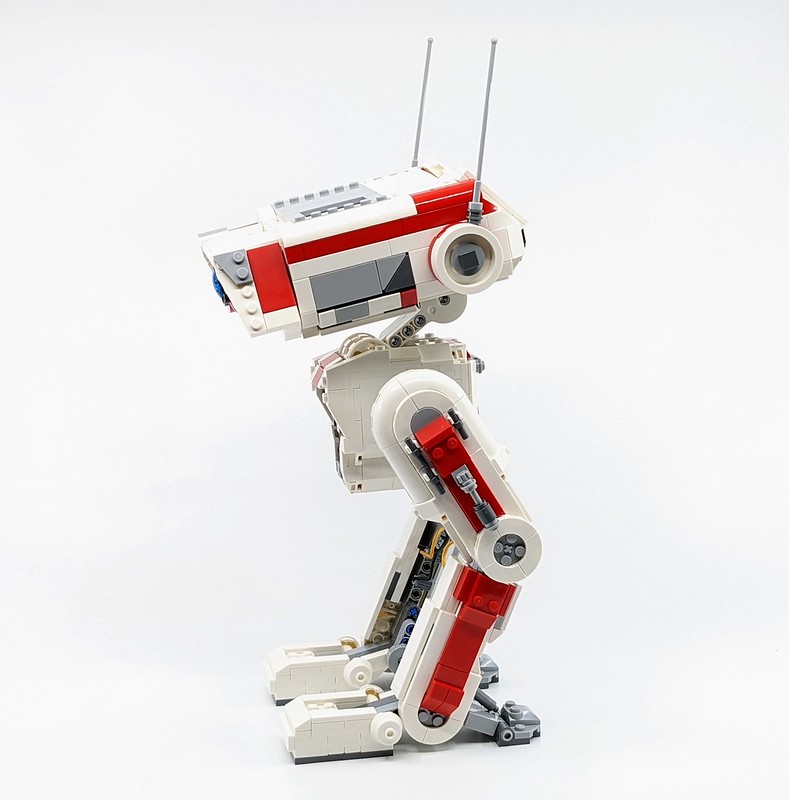 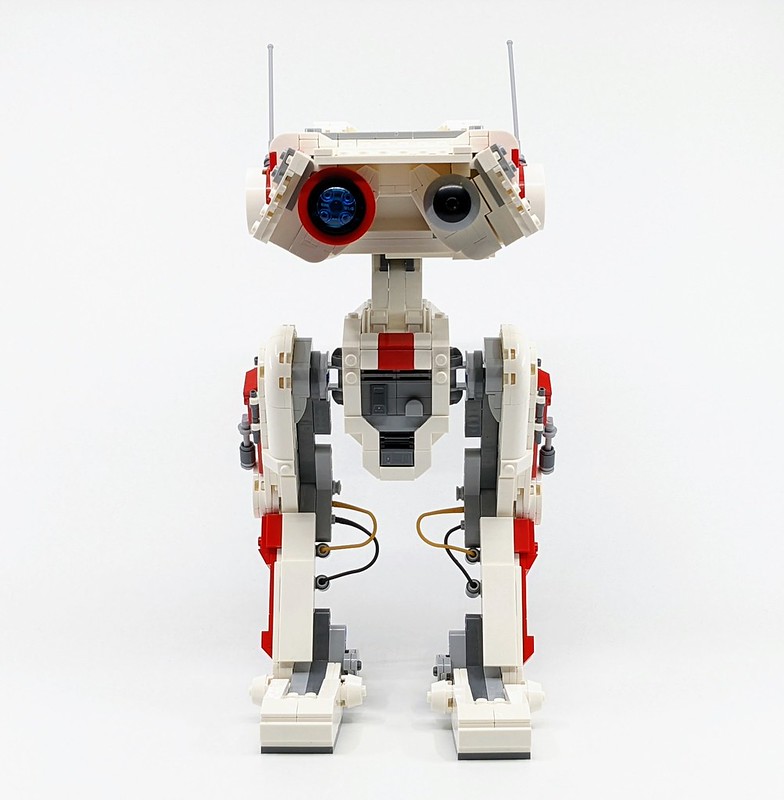 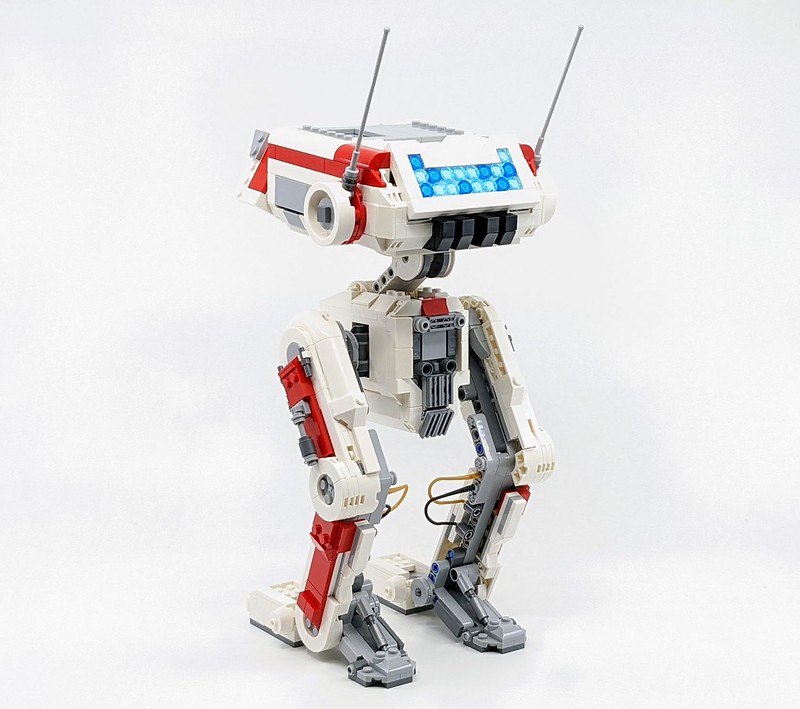 Much of the build is focused on the head. This is surprisingly detailed and includes a hidden detail inspired by the game. Within the head is a small slide-out draw, this hides a little stim pack. These are used to regain health in the game and are carried by BD-1. Another aspect of the head linked to this can be found on its rear. Here you’ll find a small panel, dotted with a series of different shades of 1×1 transparent blue round tiles. In the game, this panel represents Cal’s health with red signifying low health and green flashing up when a stim pack is used. 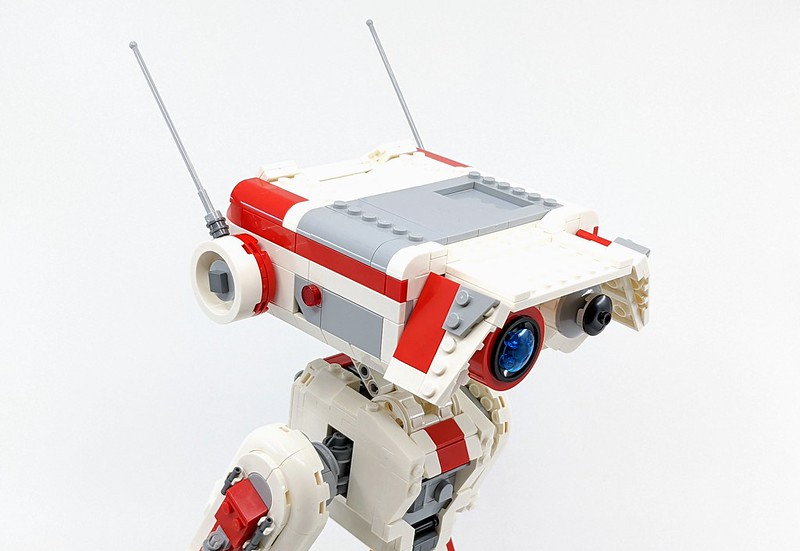 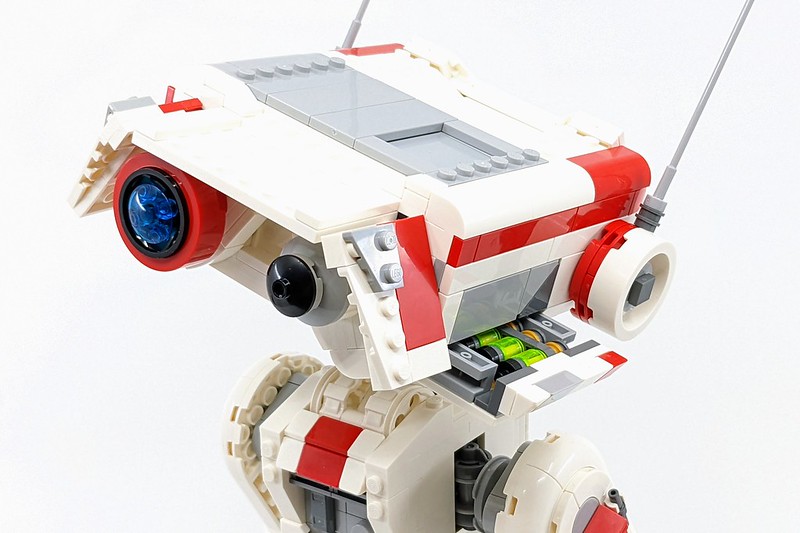 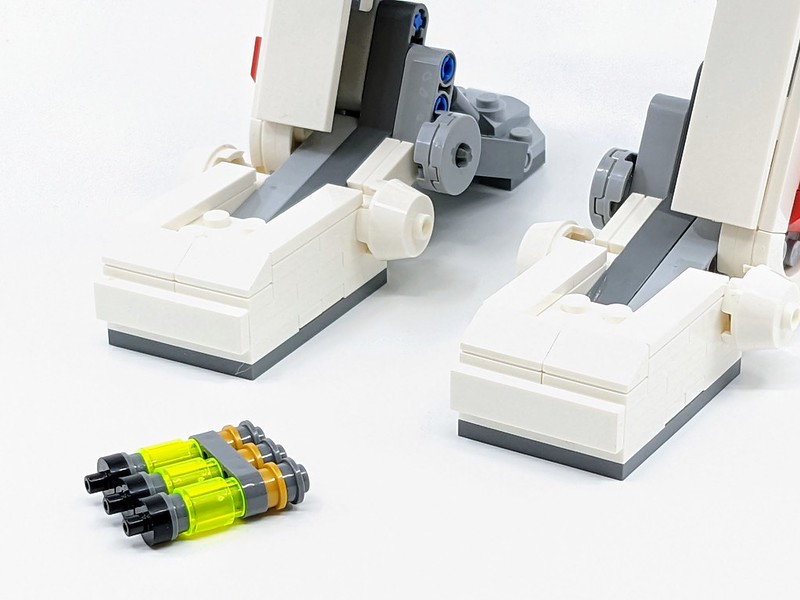 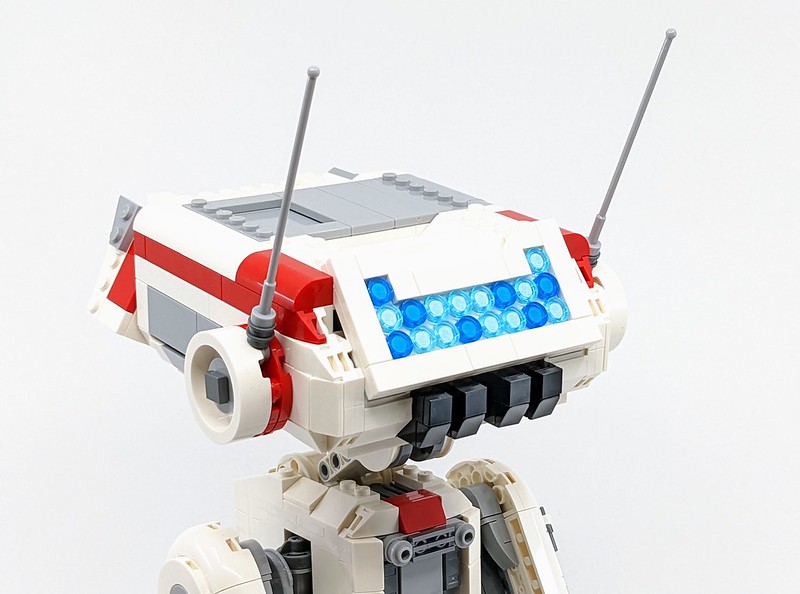 The head is also a major means for BD-1 to convey its ’emotions’. It’s mounted in such a way, you can tilt the head. It also limits the range of movement. You can’t twist the head from side to side but I’d much rather have the tilt motion in all honesty as it gives the set way more character. When combined with the ability to move the legs, you can get BD-1 to sit in a few poses. One thing I’d say when moving parts of the set, do so carefully. For example, if moving the head up and down, hold the head at the joint connection. This is not because it’s poorly designed it just makes it easier to move and less likely to come apart. 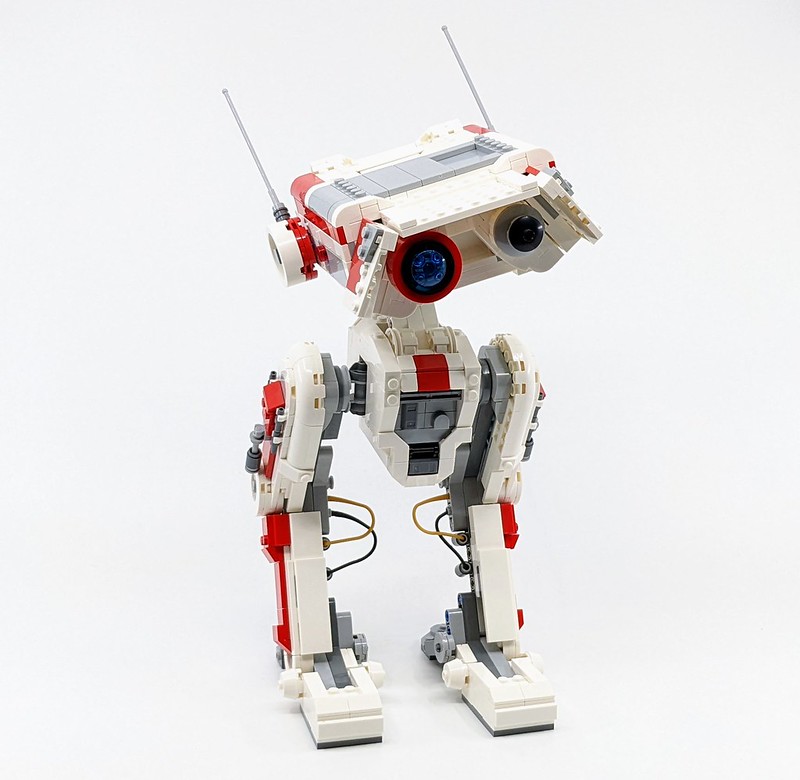 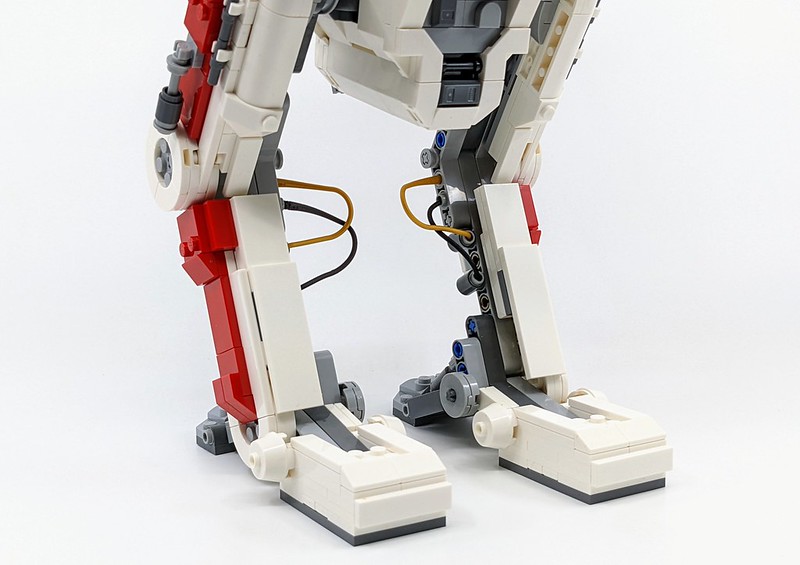 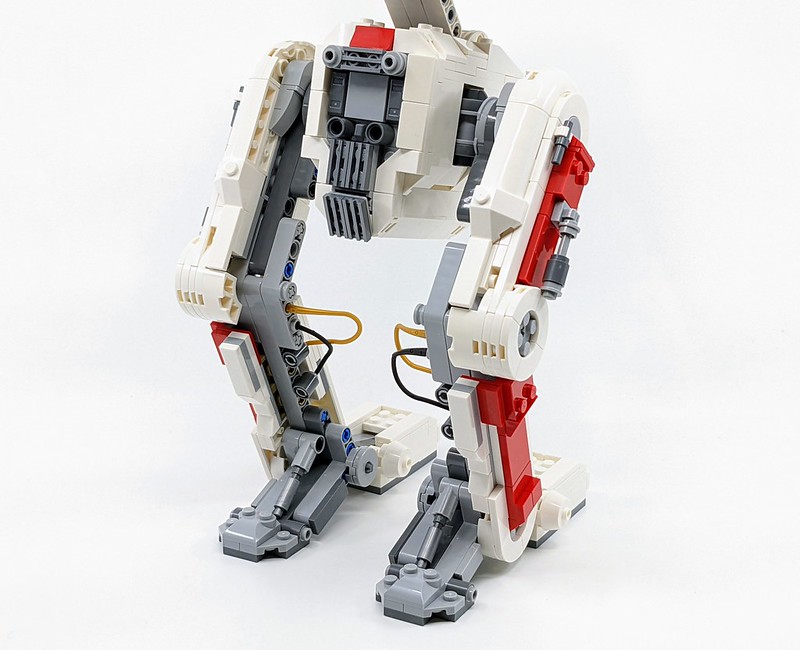 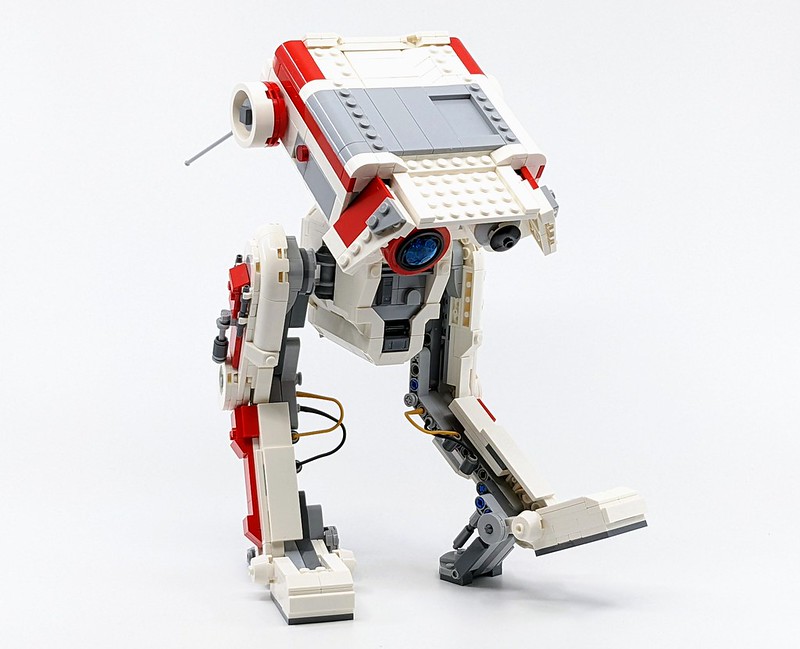 As with other Droids, BD-1 also includes a display plate, offers a few details of the characters as well as a ‘minifigure’ version of BD-1 this uses the same elements as the BD Droid in the Mandalorian Starfighter set but features slightly different print detail to match BD-1. It’s a real shame, this set wasn’t used as an opportunity to include a Cal Kestis minifigure. Hopefully, the second game, Jedi: Survivor will inspire more sets and Cal may appear in one of those. 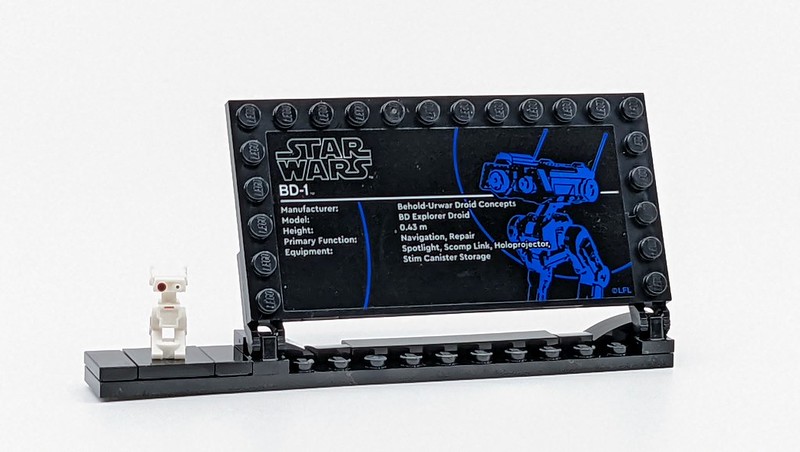 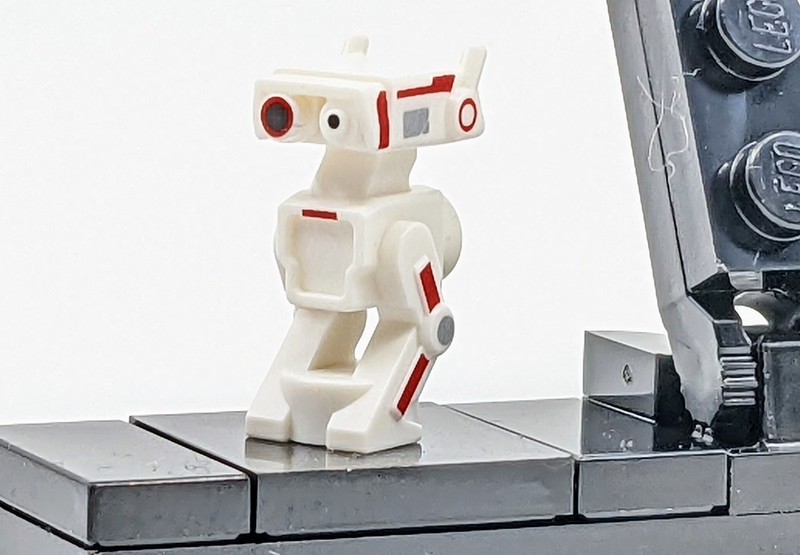 When I first met BD-1 in the game, I instantly fell in love with him. Like the long line of Droids before him, BD-1 embodies the fun spirit of the Star Wars universe. It’s also the perfect inspiration for a LEGO set. I’ve become quite a fan of these buildable characters and props. This is one of my favourites. It perfectly captures not only the look but also the character of the Droid. It could be considered that it has a limited range of movements but it has enough range in the head and legs for my liking. Above all else, it’s just a damn cool little set. The scale basically offers a 1:1 take of the character, which makes it a great display piece.

+ Basically a 1:1 recreation of the Droid
+ Very detailed
+ Captures the Droid’s character