As the credits rolled on the second season of The Mandalorian, it cuts back to a familiar-looking palace nestled in the rocky mountains of the desert planet of Tatooine. As we pan across the darkened halls of Jabba’s Palace, sitting upon a new throne is Jabba’s majordomo Bib Fortuna; surrounded by a ragtag gang of rogues. As blasters echo throughout the palace, a familiar face makes his return and so the forewords to the Book of Boba Fett begin. The Mandalorian has inspired numerous LEGO Star Wars sets recently but one of the most interesting is Boba Fett’s Throne Room. The set recreates the arrival of Fett and Fennec Shand at Jabba’s former dwellings. It also introduces some great new characters, some of which make their first Minifigure appearance. But how does a set based on such a fleeting moment during an end-credit sting shape up? Here’s my review of Boba Fett’s Throne Room 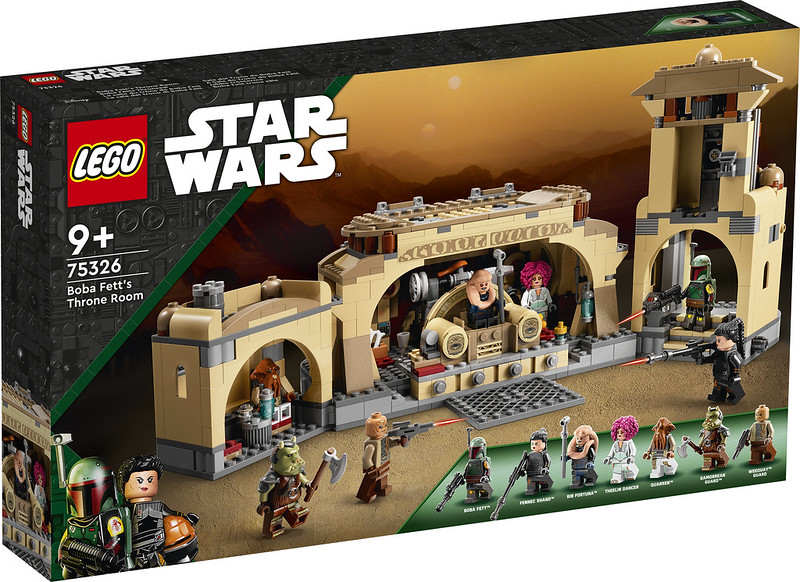 Write new chapters in the Star Wars: The Book of Boba Fett saga with this Boba Fett’s Throne Room buildable playset (75326) for fans aged 9 and up. The brick-built palace model opens up for easy access to the detailed throne room, barbecue area and kitchen. There is a throne with a hidden treasure compartment and a pop-up function to eject Bib Fortuna, tilting steps, an opening gate and lots of playful accessories. 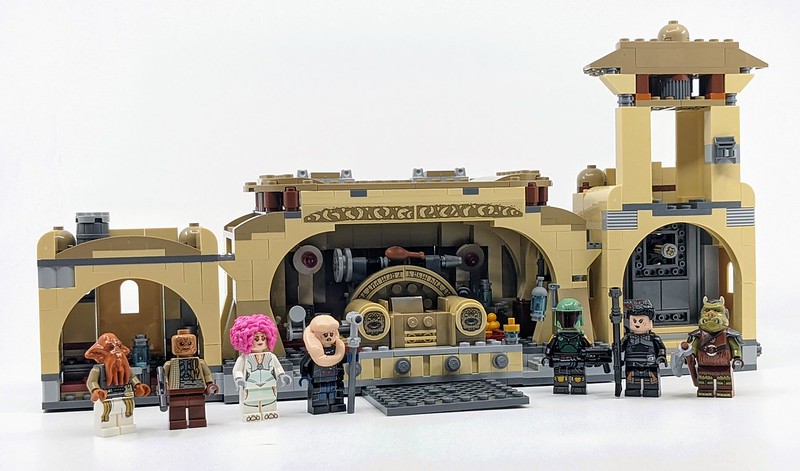 Inside the box, you’ll find six bags of elements and a single sheet of stickers. These are used to add extra details mainly to the throne area of the set. These elements could have quite easily been printed, especially those featuring the Rancor head on throne arms. 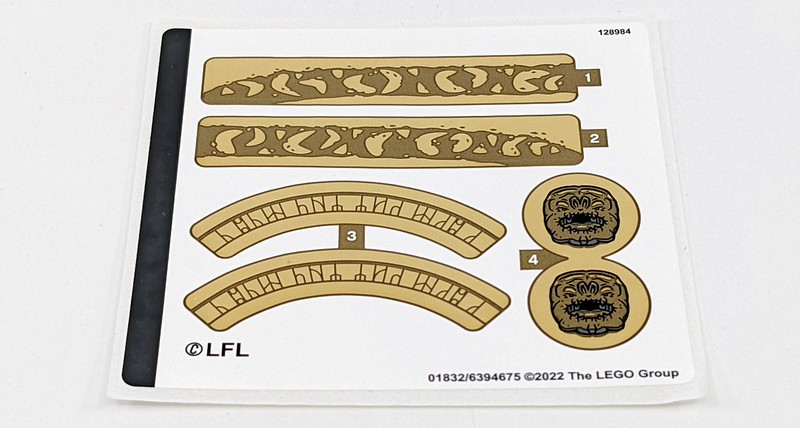 The palace is actually built in sections, which all connect together to create the larger building. This makes it feel and even look rather different from the last LEGO version of Jabba’s Palace. The previous version was a lot more contained and the tower was much taller, plus it had a fuller roof section. The tower featured in the new set feels a little dumpy and the roof is only featured in part. Despite these changes, the outer appearance of the set or the ‘back’ which technically is the front, is almost identical to the 2012 set. 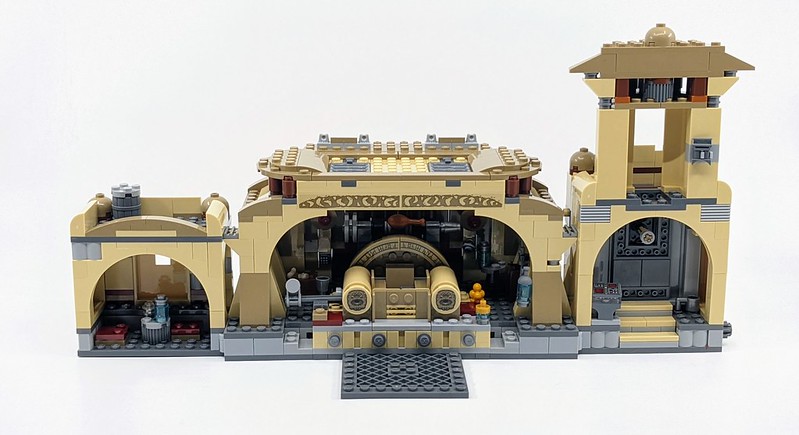 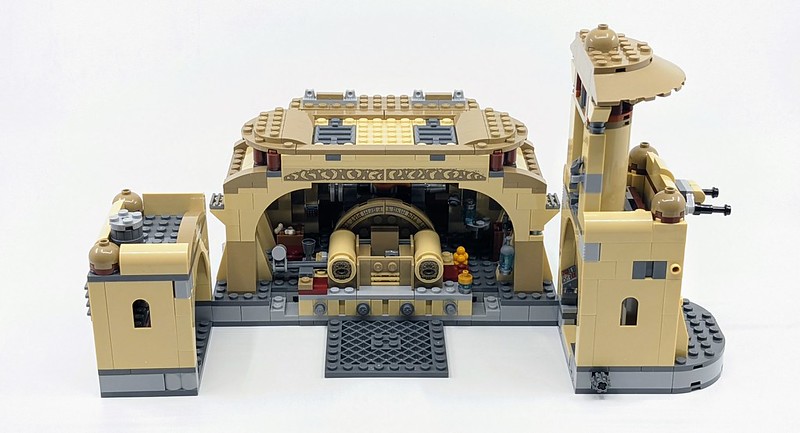 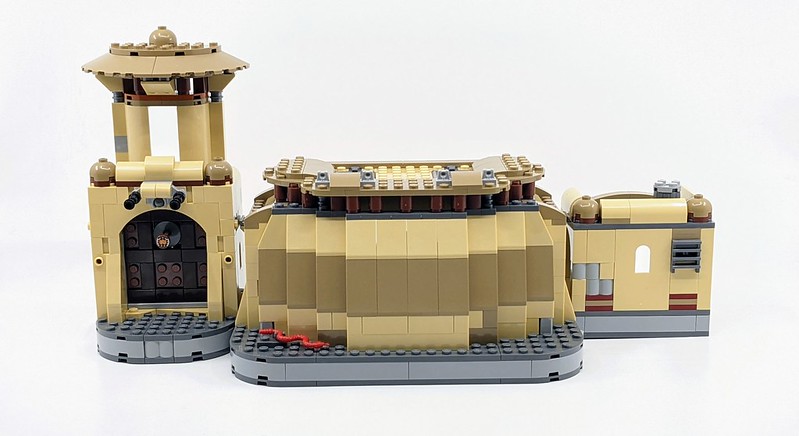 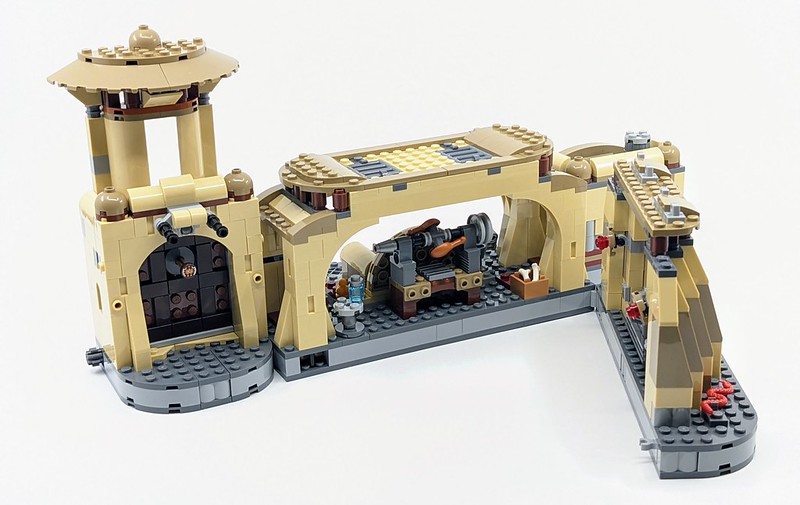 Although the back is rather plain, it does feature a word, with a gatekeeper droid, TT8L/Y7 still keeping a watchful eye on all those hoping to enter the palace. This is mounted on a Technic axle and can push in and out, the door also slides up and stays in place when raised. 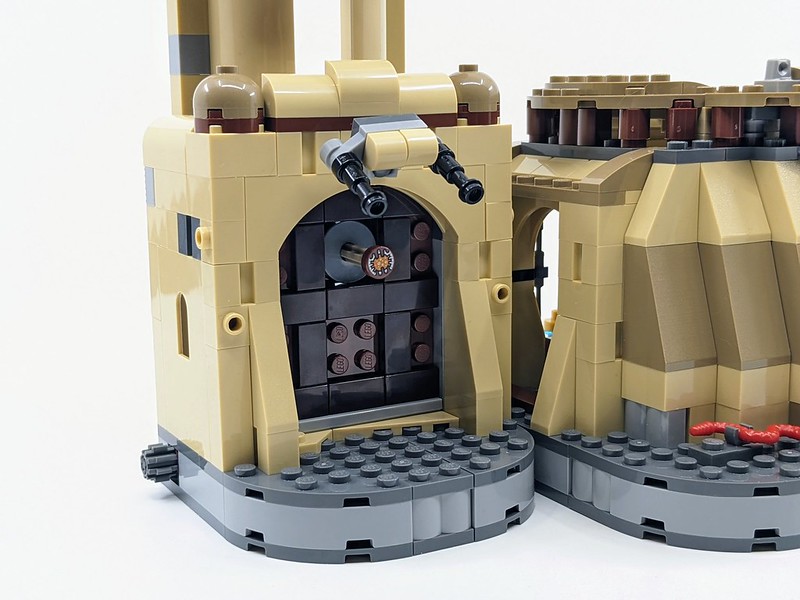 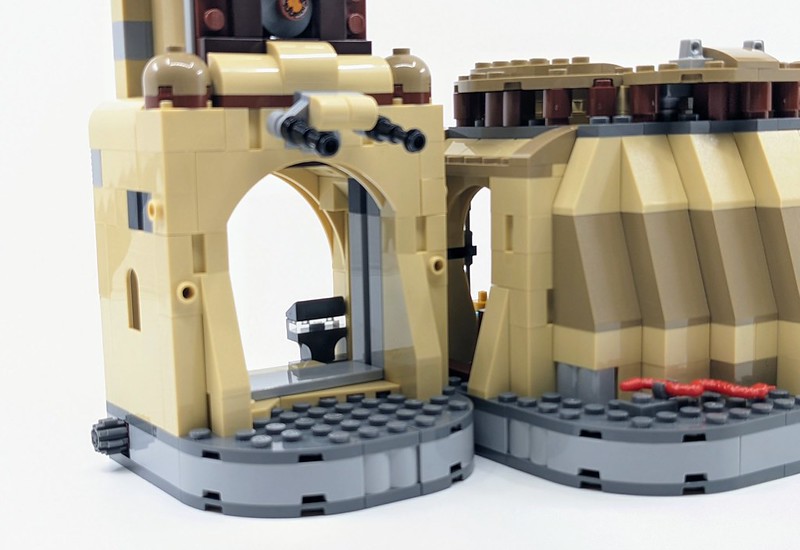 Much of the detail of the build is focused on the central room. Here you’ll find a spit roaster and stash of hidden weapons and Beskar Steel which eventually gets covered by the throne. There are also a couple of tables and stools for the various members of Bob’s entourage to hang out. If they haven’t already been blasted. 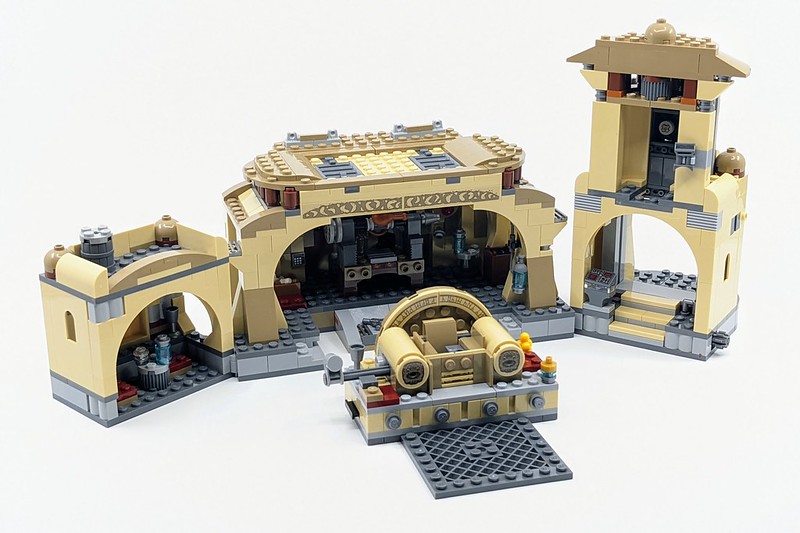 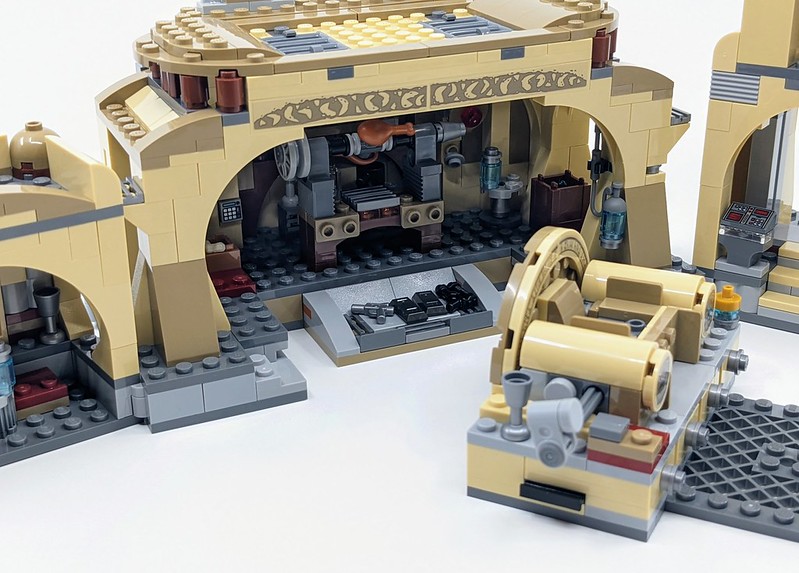 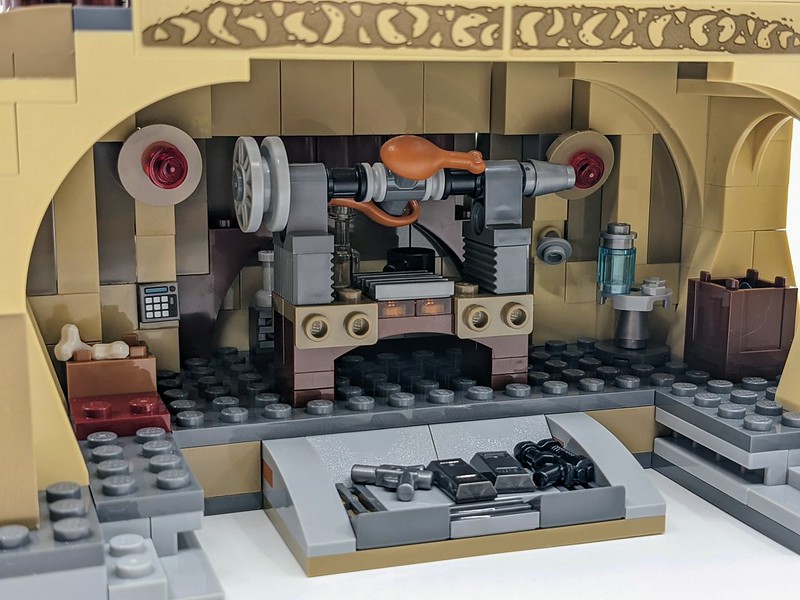 The ability to dispatch those in the Throne Room has been built into the set as a couple of play features. The short set of steps leading from the door can be tilted to recreate the fun moment a Gamoreon Guard is taken out by Fennec Shand. A similar feature is found on the throne, helping to remove Bib Fortuna from his seat of power, literally. I guess when compared to the source material these could be considered a little morbid. 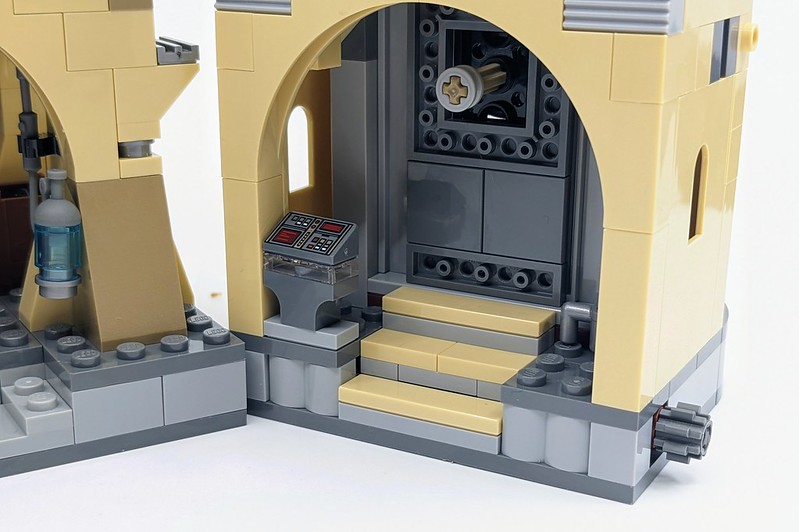 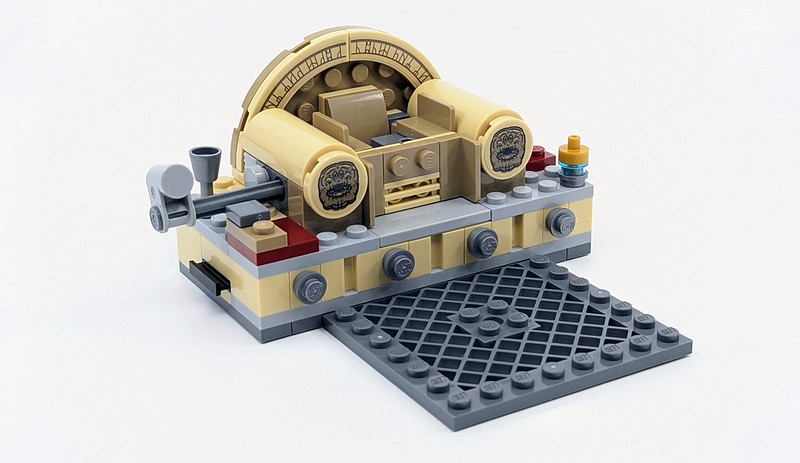 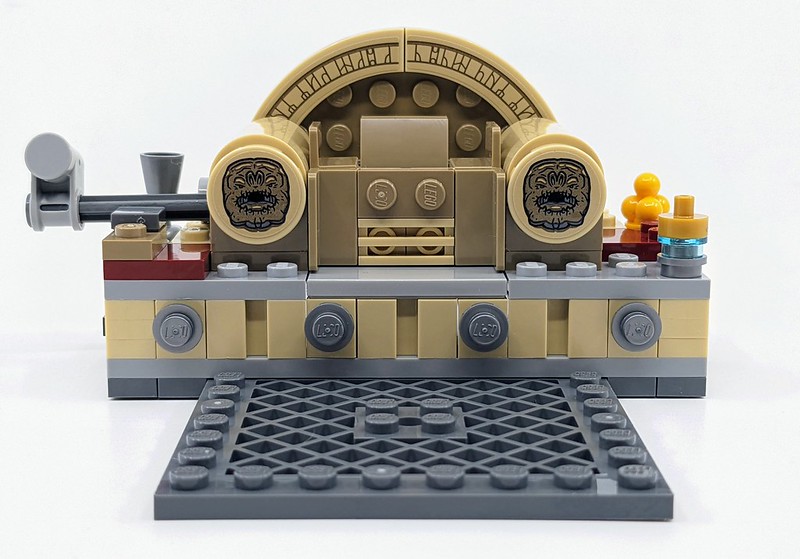 On the subject of the throne, this is built separately from the rest of the building and can be slid into it with a couple of lipped plates. This is a nice callback to the original films and if you’ve watched The Book of Boba Fett, that as well. With the platform upon which the throne sits, being able to move forward gives a better view of the Rancor Pit. 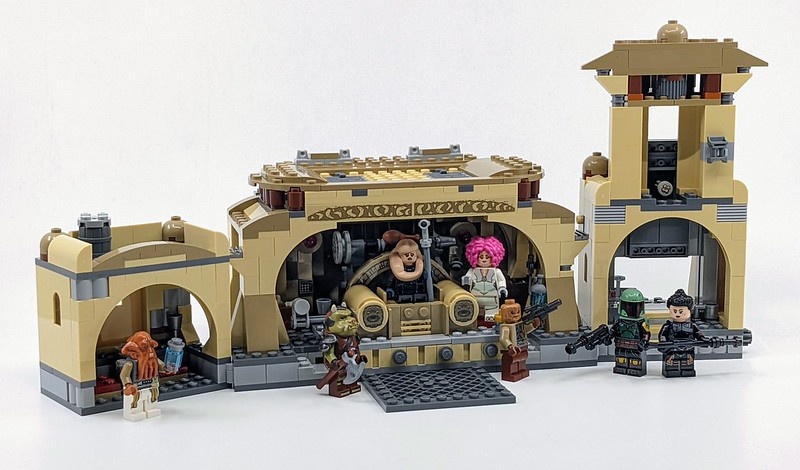 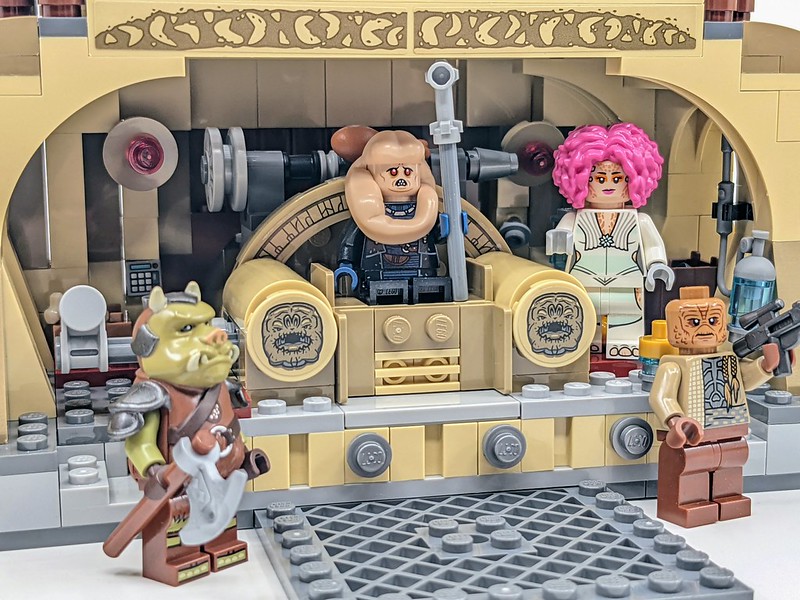 There are an impressive seven Minifigures features in the set. Many of them are either completely new and making their LEGO debut or all-new versions of previous ones. Boba Fett is based on his updated look with a black flight suit combined with his original armour. Under his helmet is Fett’s gnarly new head. He’s joined by Fennec Shand, she has been in previous sets but loses her helmet in favour of a hairpiece. 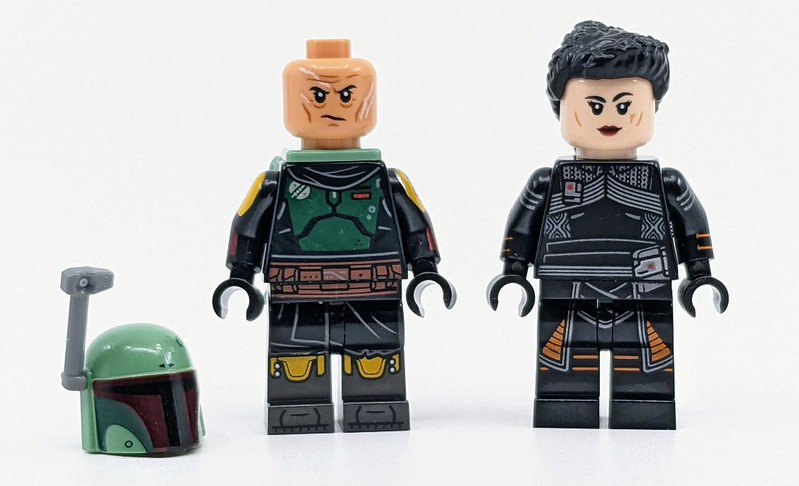 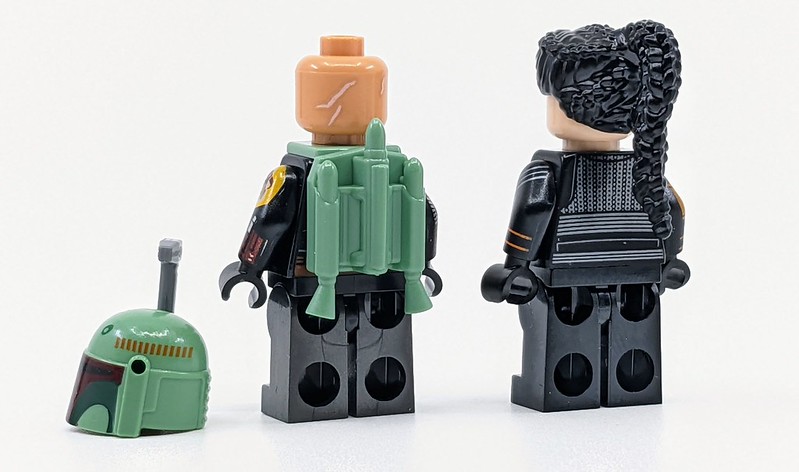 Both Bib Fortuna and his Garmorean Guard have previously featured in LEGO sets including the last version of Jabba’s Palace. Bib has been updated with a new head and a more detailed outfit. But one of the major overalls is Bib’s two lekku. Since being ‘promoted’ from his role of Jabba’s Majordomo to Daimyo, it seems Bib has enjoyed a snack or three and so he’s a little on the chunky side. His lekku headpiece has been updated to show a little more girth compared to past versions. The Garmorean Guard is billed as new-for-2022 but it’s essentially the same mould as past versions but much more detailed. 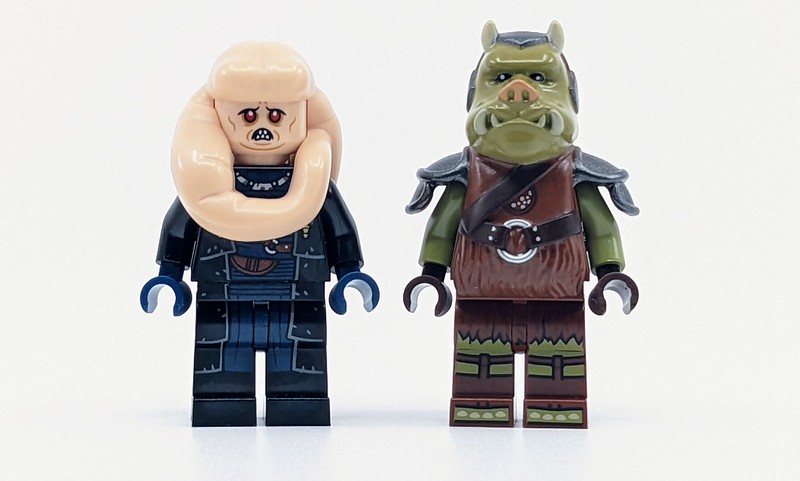 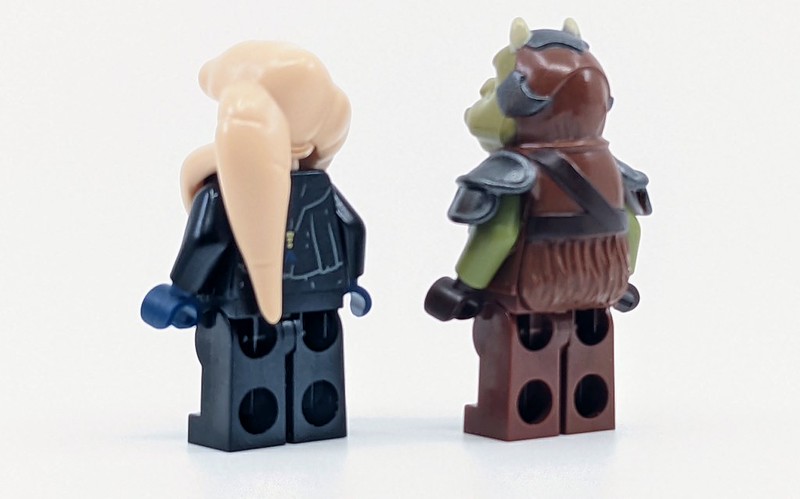 The final three characters are a mix of new faces and an updated one. The Weequay Guard has appeared in a couple of past sets but has been completely redesigned. The print detail is really good on this Minifigure, his braids flow from his head onto his torso and the face is much better than before. Quarrens are one of the more unusual alien species in the Star Wars universe, it was one of my favourite action figures as a kid but hasn’t appeared in a LEGO set before now. It obviously requires a new headpiece, which is nicely done. The final new Minifigure is a Theelin Dancer, a member of the same species who was part of Max Reebo’s Band. I assume the one featured here isn’t the same character. She’s only briefly seen in the background on the end credit scene. Her patterned skin and colourful hair are nicely captured in Minifigure form. 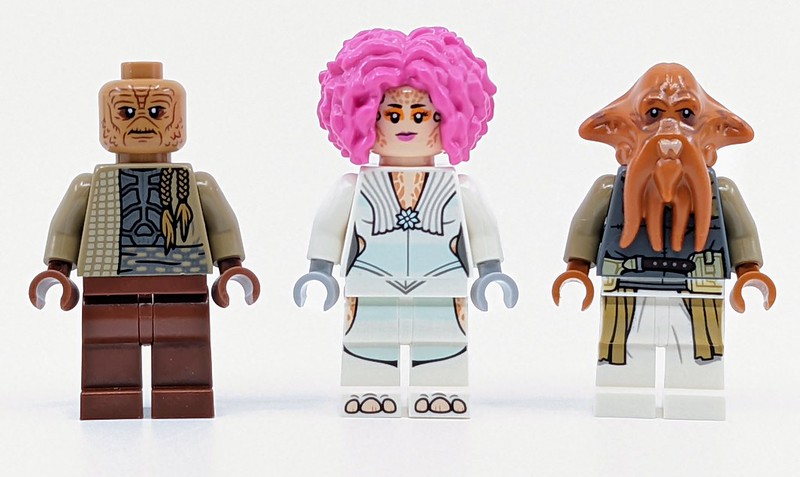 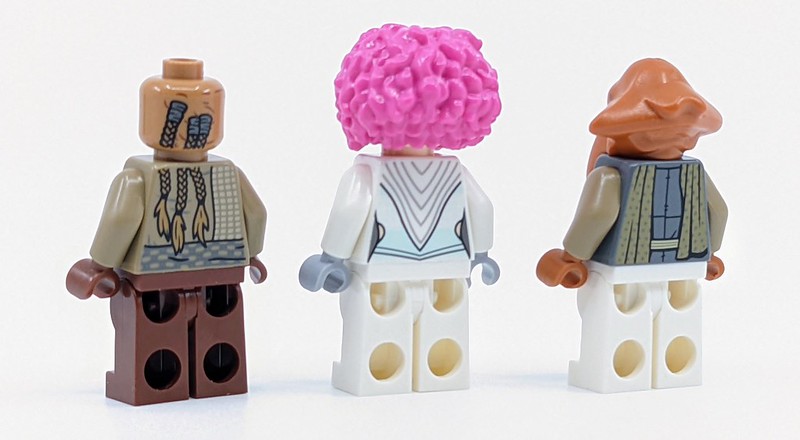 Considering the set is based on such a fleeting moment during an end credit scene is features a nice range of characters and some interesting play features when you think what’s inspired them. The overall build is fun, especially the central room, with the roaster and the throne. Some may question why some characters or other features are missing. Although the Palace is featured heavily in The Book of Boba Fett, this set isn’t technically based on the show.

– Stickered pieces could have been printed
– Tower secion is too short